7 Best Rabbits For Children (with Pictures)

There is no doubt that a rabbit is one of the most adorable animals around. While there are many different rabbit breeds, not everyone can become a kid’s instant furry friend. If you want to learn more about these cute creatures, here are the 7 best rabbits for children.

Before taking a rabbit in, there are some things you should know. If you are looking for a pet, rabbits aren’t generally recommended.

However, there might be some exceptions to this. Some breeds are more open and welcoming to children. Also, the way you train and treat them can play a part. Given all these, here are X rabbits that would be best for children: 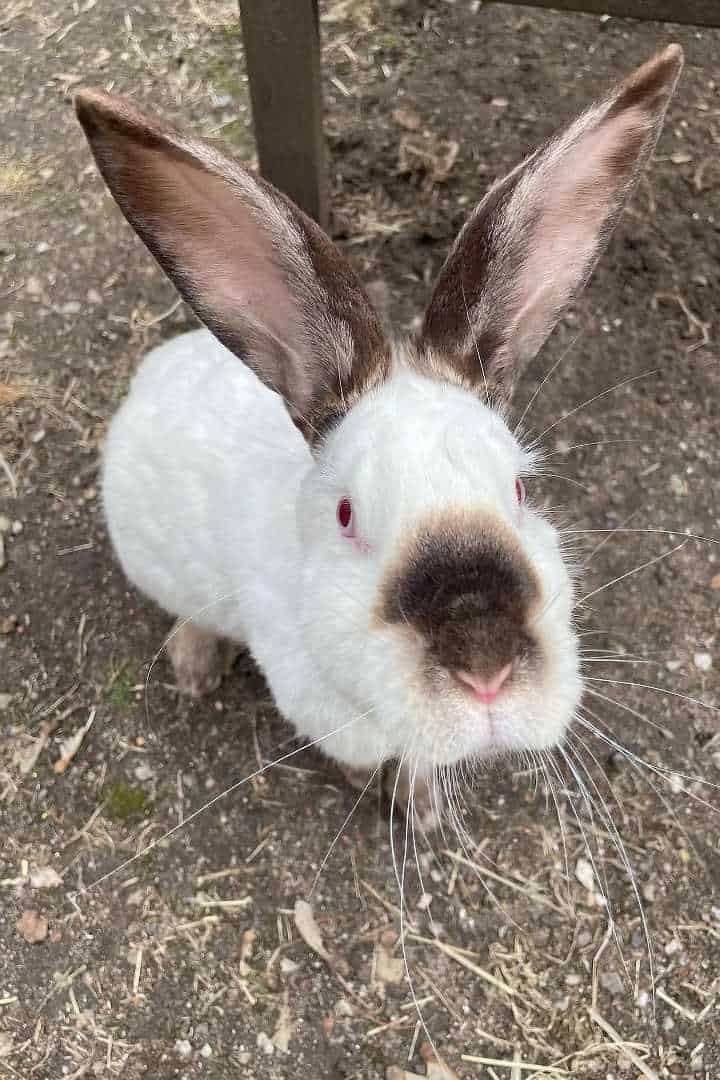 The Californian or the California White is, perhaps, one of the most popular rabbits. In the early 1920s, a man named George S. West began a crossbreeding program.

He crossbred New Zealand Whites and the Standard Chinchilla and Himalayan rabbits. After a couple of attempts, West was able to develop a new breed. The breed debuted in 1928.

The California White was developed as a show rabbit breed. However, breeders also figured out that this breed is a good producer of meat and fur.

If you are looking at a Californian rabbit, there might be a couple of things you would notice first – their size and color. They usually weigh between 4.9 to 5.4 kgs.

The Californian has a large body. It has white fur with some colored spots. The spots or markings are usually dark brown or black in color. And these are usually found in the following areas:

You might also notice how big the ears and how short the necks of a California White are.

Apart from their fur and meat, California White rabbits are revered for their temperament. They might appear quiet and reserved.

However, they will be more open and friendly with proper training and socialization. If you want a rabbit for your children, then consider the Californian.

One of the things you can do to make sure that the Californian is doing good is to take it out of its cage and play around with them. The rabbits would enjoy this bonding activity. 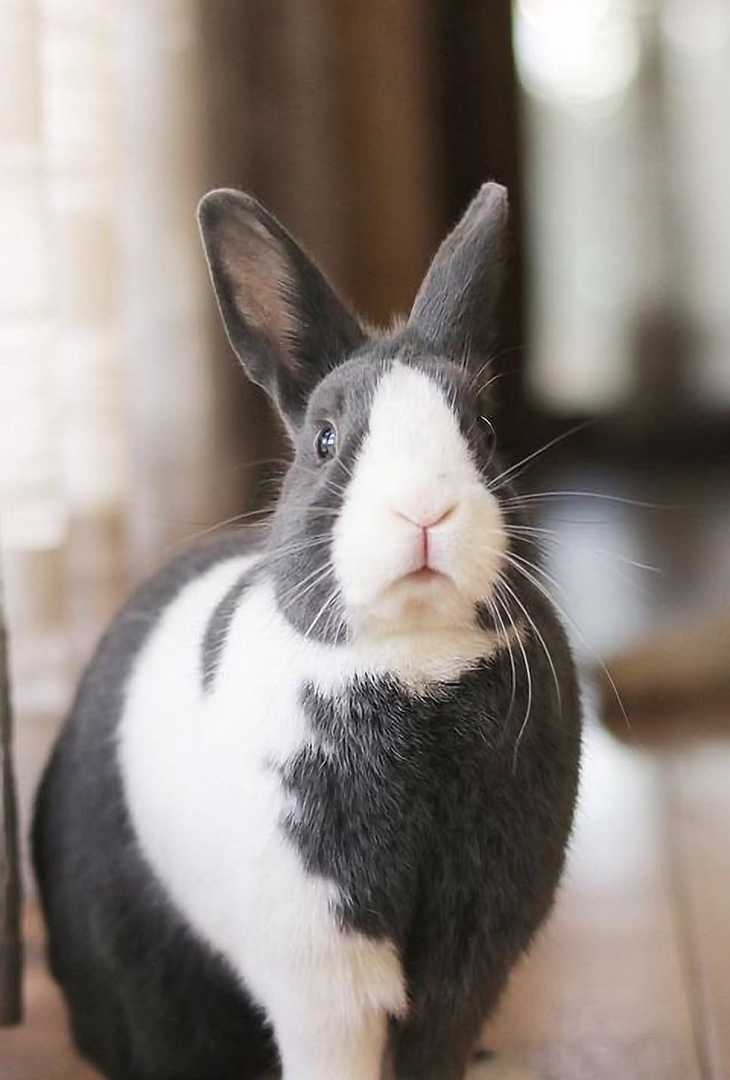 Did you know that Dutch rabbits aren’t exactly from the Netherlands? Yes, it might come as a shock, especially to those who have no idea know that this rabbit breed came from the United Kingdom! The Dutch rabbit is also called the Hollander or Braabander.

The origin of this breed can be traced back to the 1830s. The original breed was imported to England from Belgium. The breed was altered and developed to become the Dutch rabbit we now know. In Europe, this breed is a popular domestic breed.

Compared to the Californian, the Dutch rabbit has a smaller build. Despite its size, it’s not categorized as a dwarf breed. They fall between 2 to 2 kgs. They have an average lifespan of 6 to 9 years. If you take care of the Dutch rabbit well, it can live even longer than this!

The Dutch rabbits come in either chocolate, brown, or gray. They have markings on some parts of their bodies like the shoulder, feet, and face.

This breed is known for their friendly nature, making them ideal pets for children. They are also intelligent. It’s easy to train the Dutch rabbit. They are a sociable breed who can vibe with others easily.

One of the best things you can do for the Dutch rabbit is get them some toys. If you want to strengthen the relationship with the Dutch rabbit, you should show them affection and play with them. 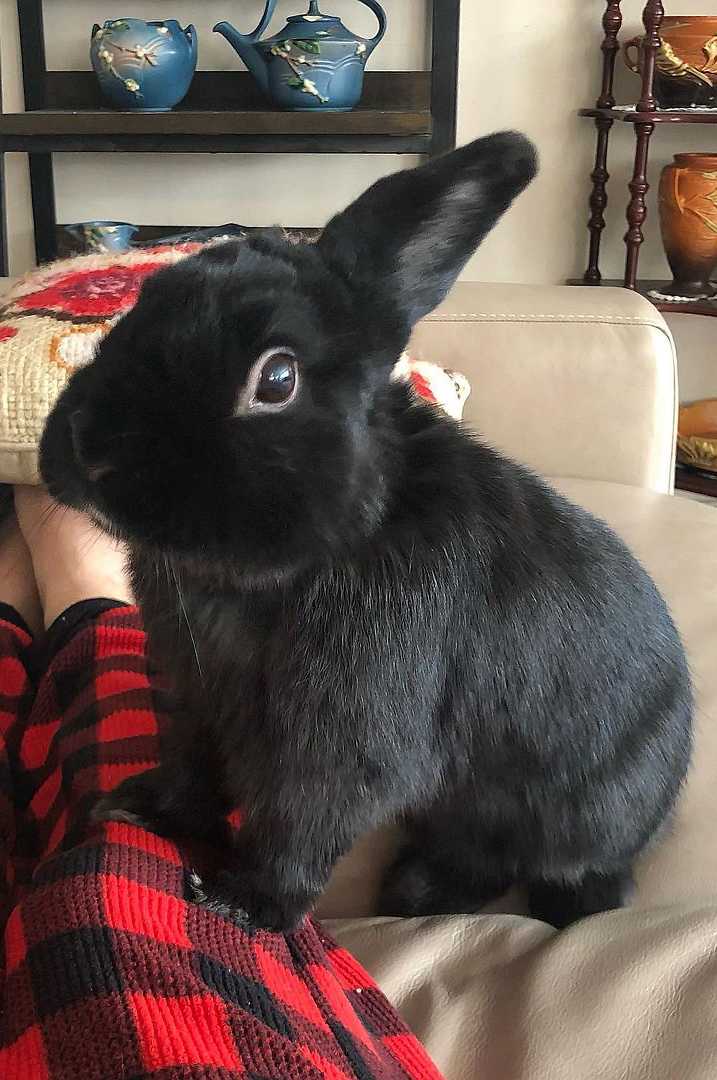 The Havana is probably what you can consider a medium-sized rabbit, weighing between 2 to 2.9 kgs. Its body is rounder and smaller compared with other breeds.

Its legs and ears are also shorter. They can live between 7 to 10  years. With a proper diet and cake, they can even extend their life spans!

The Havana rabbit makes a good pet. It’s sweet, calm, and intelligent. And here’s something awesome about them – they also thrive on affection! Don’t forget to give them the tenderness, love, and care they deserve!

This breed is not afraid to cuddle up with its owner or another rabbit. Due to their friendly nature, they can vibe with first-time rabbit owners and children.

However, some Havana rabbits can get a little aggressive. With that said, smaller children who wish to interact with them should not be left alone. Make sure you are present when your younger kid interacts with this rabbit. 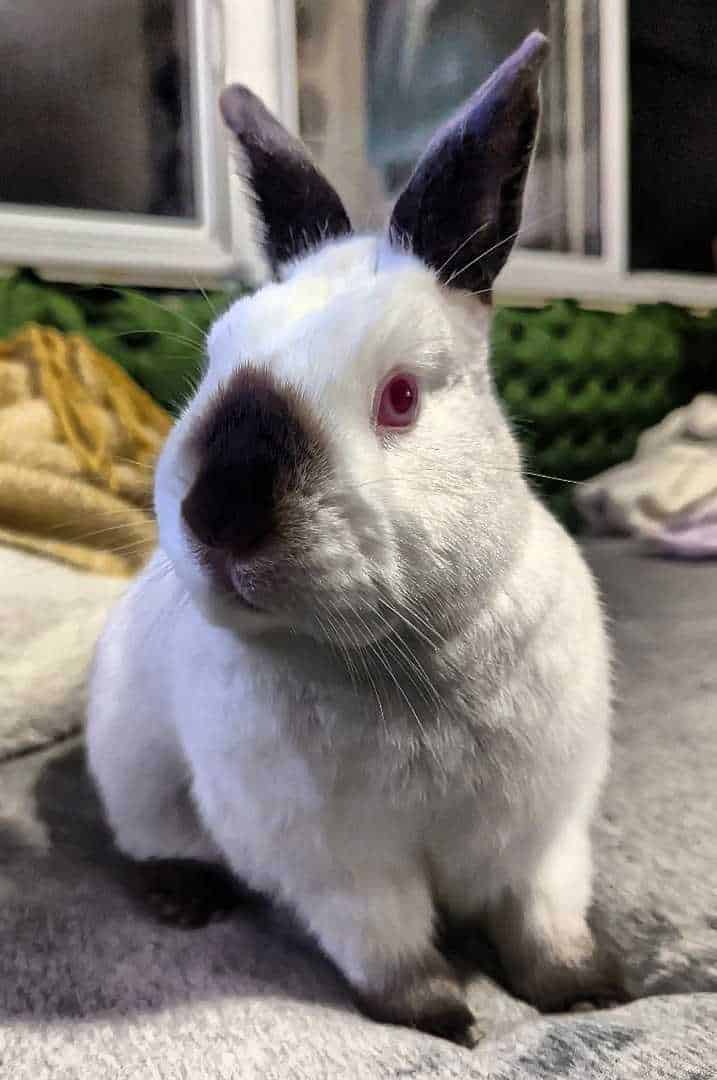 The Himalayan is perhaps one of the most popular rabbit breeds in the world. Much has been said about its origins. However, its exact beginning is still up for debate.

But despite the mystery, this has not stopped the Himalayan rabbit from being well-liked! It’s no surprise that many use this breed for their crossbreeding initiatives. And to add to that, it’s also a popular breed for pet rabbits!

This breed of rabbit is on the smaller side, weighing between 1.4-1.8 kgs. However, it has a long body. Himalayan rabbits either have gray or white coloring. As they grow older, you might be able to see some markings or spots on their furs.

Dark marks will be appearing around some areas of the rabbit’s body like the genitals and eyes, whenever they are exposed to the cold. However, the marks will also lighten up once it’s hotter or warmer.

If you want a calm and chill rabbit, then go for the Himalayan. They are friendly and affectionate. This breed has no problem bonding with humans, especially if they start at an early age.

This makes them great for children. Imagine the precious bond your child and Himalayan bunny will form!

The way to a Himalayan’s heart is through playing! Since they are friendly, they will enjoy playing around. It’s a good way to establish a bond with them!

Taking them out of their enclosure to amuse themselves would be a good exercise, especially since they are not the most active breed. 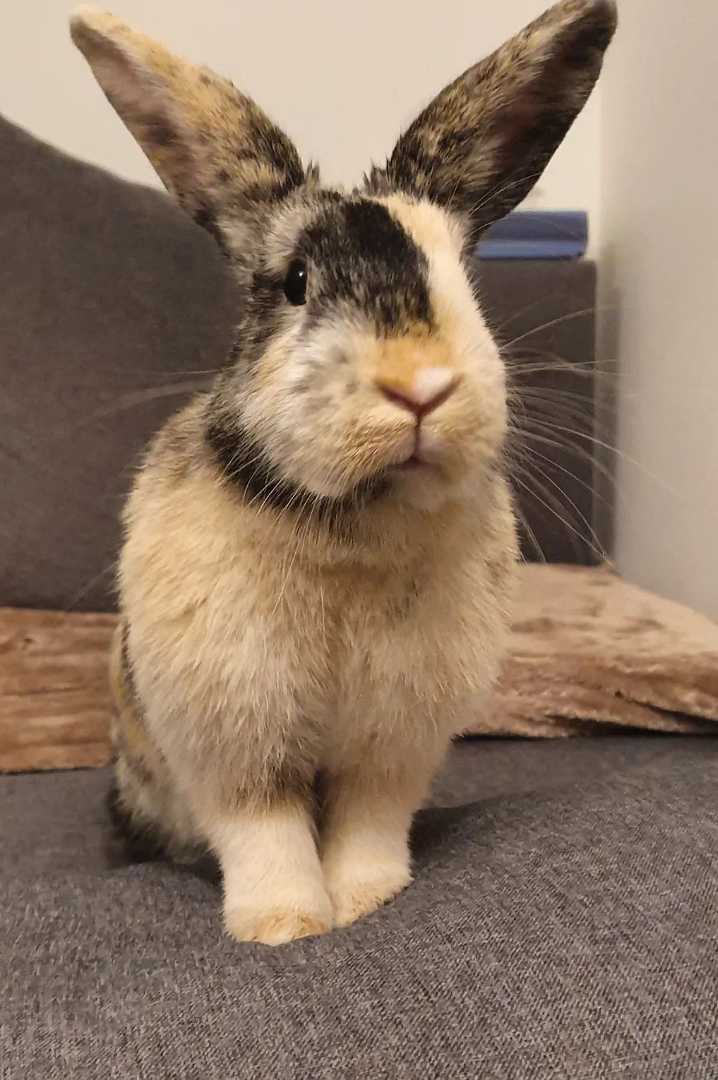 The Harlequin rabbit first made its presence known in France back in the 1880s. It was exported to the United Kingdom and the United States many years after.

This rabbit breed used to go by the name “Japanese rabbit”.  However, there was a name change due to the war back in the day.

This rabbit breed comes in two varieties – Japanese and Magpie. One of the most distinct differences between these two is their coloring. The Japanese Harlequin is orange, while the Magpie Harlequin is white.

They usually have chocolate, blue, lilac, and black markings on their bodies. They are often categorized as medium to large breeds due to their size. They weigh around 2 to 3 kgs.

One of the things you should be wary of is that Harlequin rabbits have shorter life spans than other rabbit breeds out there. They are expected to live between 5 to 8 years only.

Harlequin rabbits are curious explorers. If you let them out to wander, they will have the time of their lives. These furry fellows are affectionate. If you want to show them love and appreciation, a couple of scratches and cuddles will do the job.

While the Harlequin is generally carefree and laidback, don’t frighten or surprise it. They might exhibit aggressive behavior, especially if they are new to the place and don’t know you and your child well. 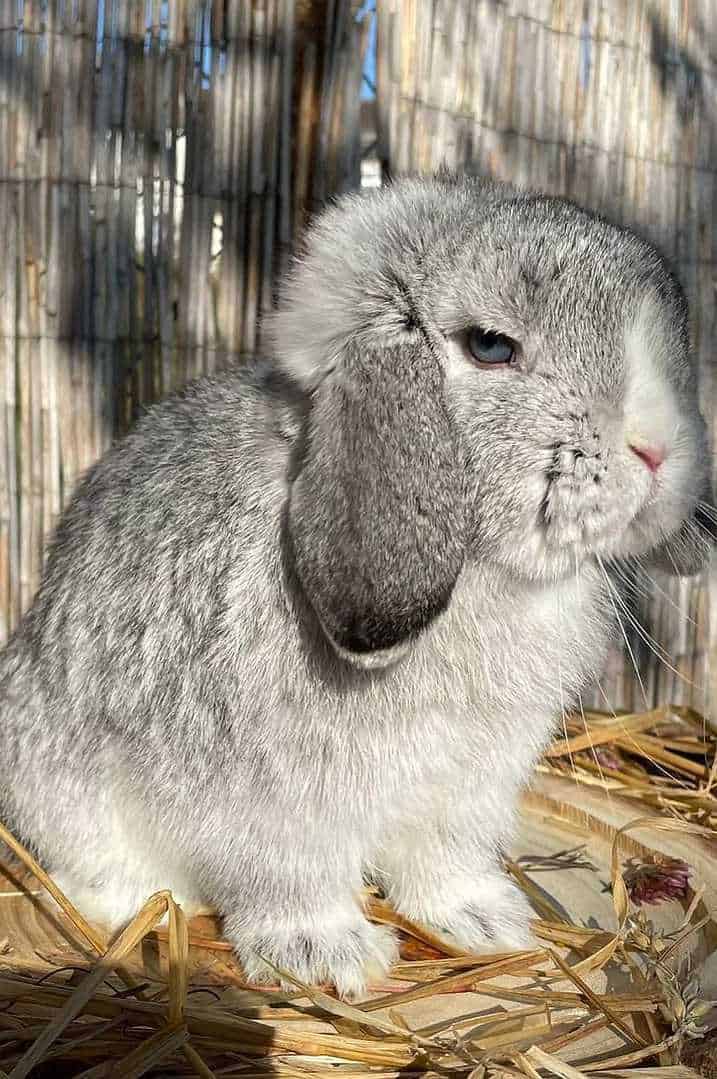 If you are searching for a rabbit that would be great for children, check out the Mini Lop. It’s a small rabbit breed perfect for your family.

The Mini Lop was developed by breeding different rabbit species. These breeds include the following:

Since the Mini Lop is considered a “medium” rabbit, its weight falls between 2.5 to 3 kgs. It has a compact body structure with a big head and short neck.

This particular rabbit comes in different colors, such as the following:

If you are interested in a Mini Lop rabbit, make sure you go to a reputable breeder. They will be able to tell you more about the different Mini Lops.

Mini Lops are independent, friendly, and easy-going. Once they get the hang of your presence, it’s easy for them to form a bond.

In the beginning, the Mini Lop rabbit might be not be used to being around you and your child. If this happens, don’t force them to do anything. Wait for them to open up and approach you on their own.

Once they realize that you are not preying on them, they will be more approachable and affectionate. 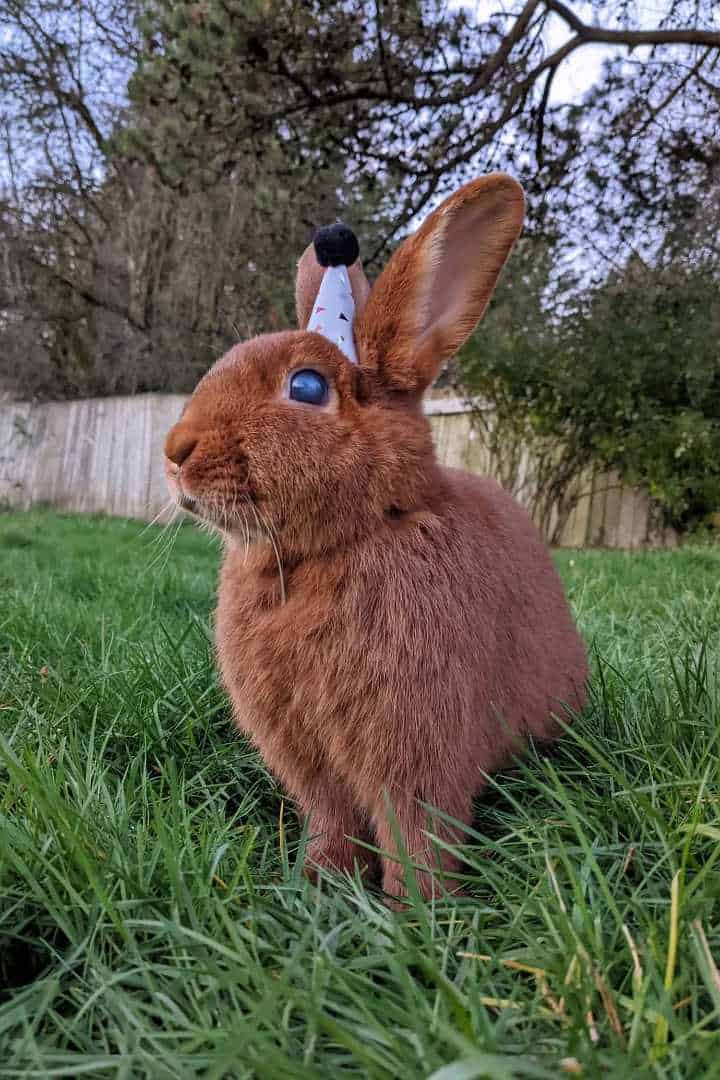 When World War II broke out, the population of Thrianta rabbits dwindled rapidly. During this time, their meat was in high demand.

When you lay eyes on the Thrianta, you can’t help but gush. It has a round and compact body, accompanied by an orange or scarlet soft and thick fur coat. As a medium-sized rabbit, the Thrianta’s weight is between 2 to 2.7 kgs. They can live between 5 to 8 years.

If it’s your child’s first time raising a rabbit, the Thrianta is an amazing option. It’s just the right size, and it has the perfect temperament for a pet rabbit.

This rabbit breed is friendly. It’s not afraid to socialize and curious. You can let it roam around outside its enclosure and let it discover new stuff.

Be Cautious: Rabbits For Children

There are several rabbit breeds that you can consider as pets. Some, like the ones mentioned, would be good around children. However, there are a lot of responsibilities that come with taking care of them.

It’s especially challenging if you are getting a rabbit for your children. They, too, need to know their responsibilities.

Before getting any rabbit, there are a couple of things you should take note of:

Getting The Rabbit From A Professional

Given the number of rabbit species out there, you should know where to get the best ones. You should seek the help of a professional breeder.

They would be able to explain to you the different rabbit breeds and their various personalities and temperaments. It would allow you and your child to be more familiar with what you are about to get yourselves into.

Diet is a major part of a rabbit’s life. It’s because their digestive system is quite sensitive. You have to let your children know that they just can’t feed the rabbit anything. They need to have a healthy dose of hay during mealtimes. You can feed them some fruits and vegetables too.

However, consider those as treats. Since there is too much sugar in these types of food, it might cause digestive and other health issues.

Choose The Best Rabbit For Children

If you have a couple of good options, picking the best bunny for your kid is not be an easy task. Before getting one, learn about the best rabbits for children first. It’ll make the decision-making so much easier for you and your little one!