How to Store Hay For Rabbits?

When we say rabbits need lots of hay every day, we mean it! Rabbits require unlimited access to hay or grass 24/7. Because they consume and munch on hay all day, you’re probably considering storing hay at home. Here’s a quick guide on how to store hay for rabbits, including the benefits of this essential food for your pet.

We’ll discuss the best storage options for rabbit hay and every detail you definitely wouldn’t want to miss. Let’s begin!

Can you store hay for rabbits safely?

Yes. You can definitely store rabbit hay. Well-stored hay can last up to 6 months or even longer. Storing hay for rabbits prevents their food from spoilage. Storing rabbit hay also keeps the hay from moisture and wetness that potentially makes hay go bad. Other than that, properly stored hay prevents molds from growing as well.

How to store hay for rabbits 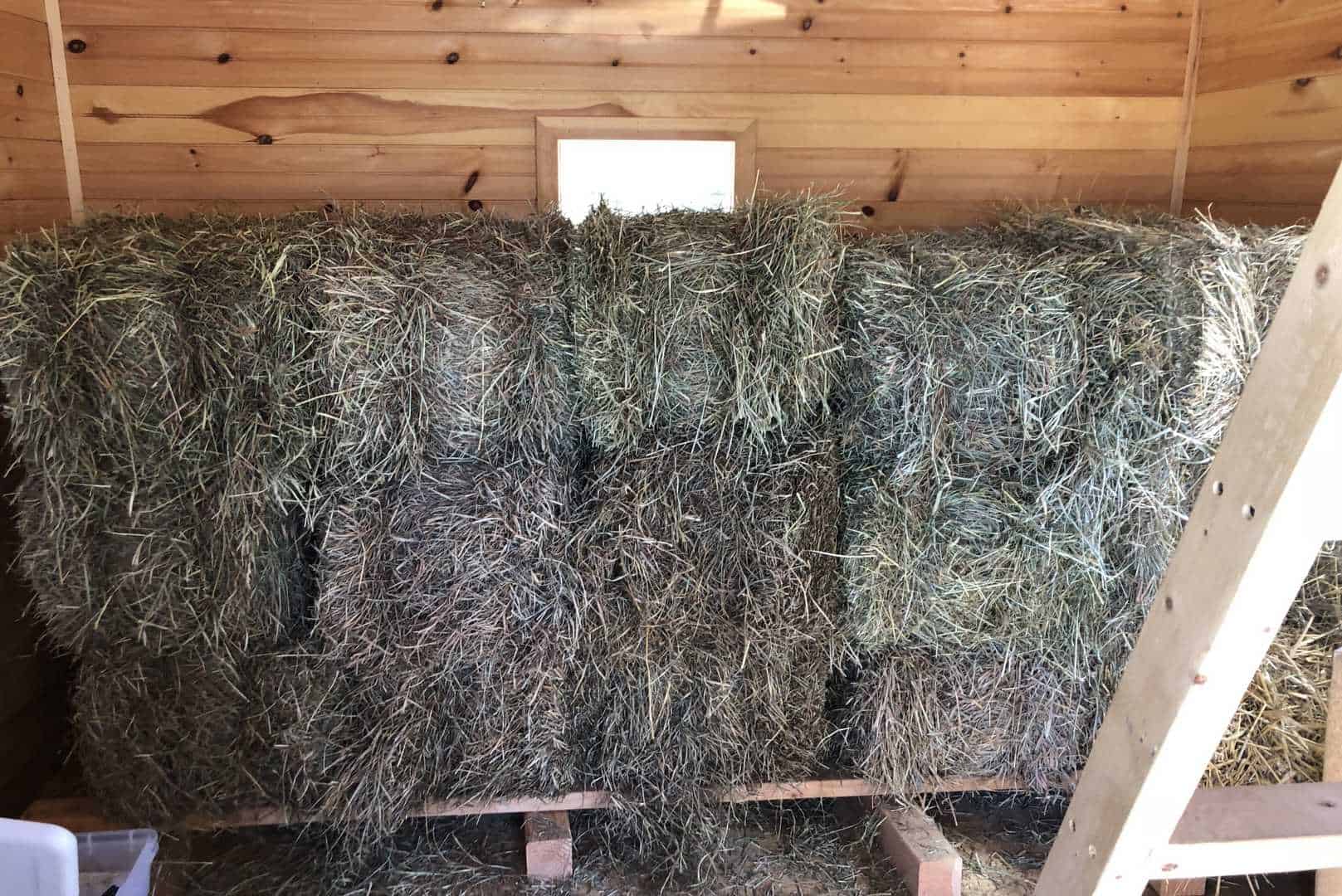 Store your rabbit’s hay in a well-ventilated indoor or outdoor area. Areas with good ventilation provide fresh air to your rabbit’s food. You can opt to put the hay inside plastic bags or woven sacks. Others prefer a cardboard box, wicker basket, and airtight containers as storage for rabbit hay.

However, some rabbit enthusiasts say that using an airtight container to store hay for rabbits is not a good idea. It is believed that air-sealed boxes are too tight to allow air to pass through, making it hard for hay to “breathe.”

For this reason, there would be the formation of moisture and mold. Some drill holes around containers to provide ample air circulation. If you plan on storing them outdoors, it’s perfectly fine. Don’t mind the drizzle and rain! As long as the area has constant airflow and sunlight, your rabbit’s hay will be moist-free.

If there’s one thing you should never miss, it’s to not let hay touch the ground for long. Having hay kept directly on the ground can cause it to absorb water. If you unwittingly do this, you are heightening the chance of hay spoilage.

What is the best option for storing hay for rabbits? 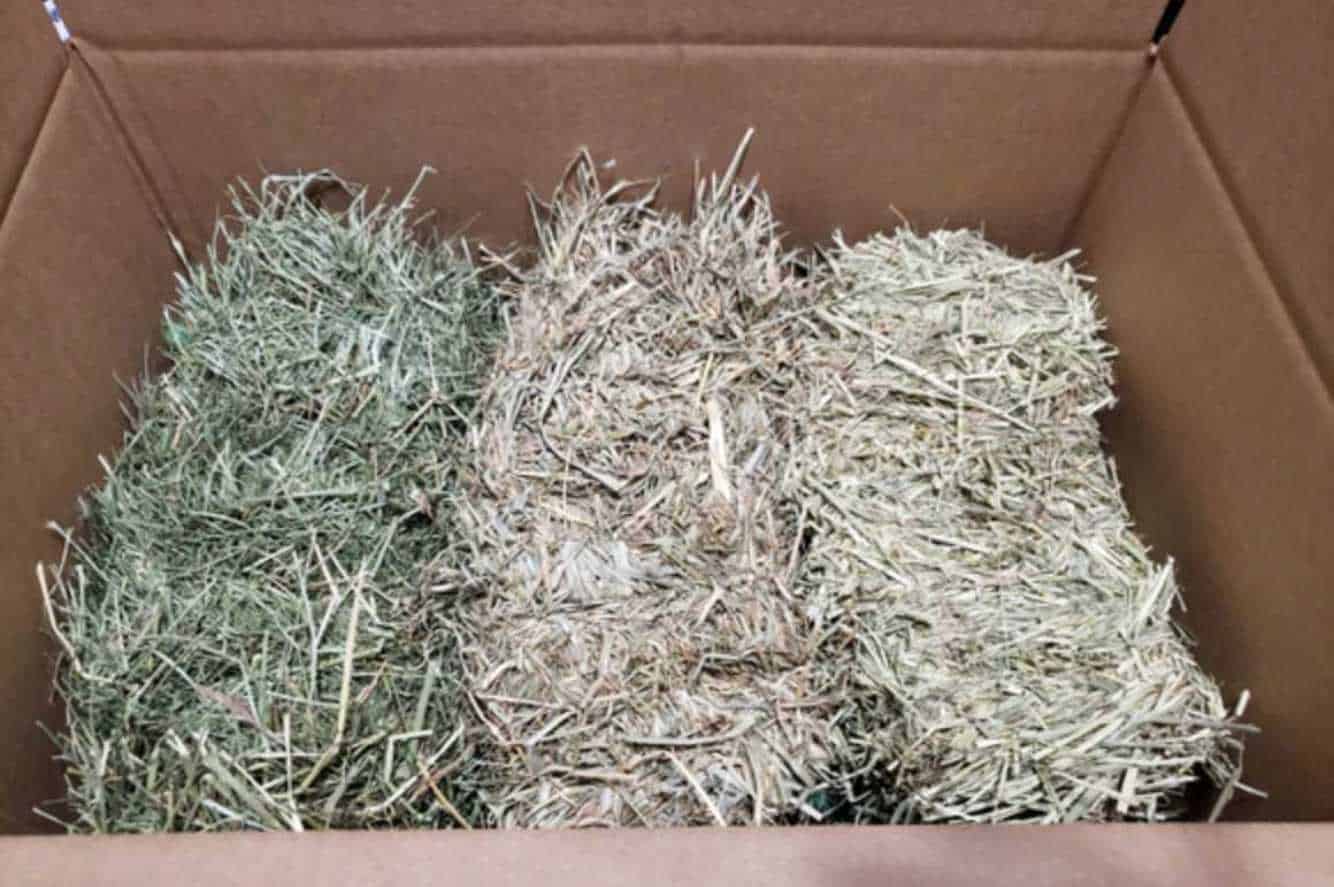 Based on our research, rabbit owners suggest using a plastic can for hay storage. It is a cheap, easy, and quick option to keep a good amount of hay. If you have larger bales and a spacious area, a large manger is recommended. A bigger manger can accommodate bales of hay and would keep them moist-free.

How much hay do rabbits need?

The amount of hay a rabbit should receive is around 13 ounces per 2 to 3 pounds of body weight each week. Hence, this should comprise 80% of a rabbit’s diet. Every day, rabbits need constant access to hay or grass. They love hay and grass so much! And of course, they would require lots of fresh and clean water as well.

Types of hay for rabbits

There are 5 main types of hay that you can give your rabbit: 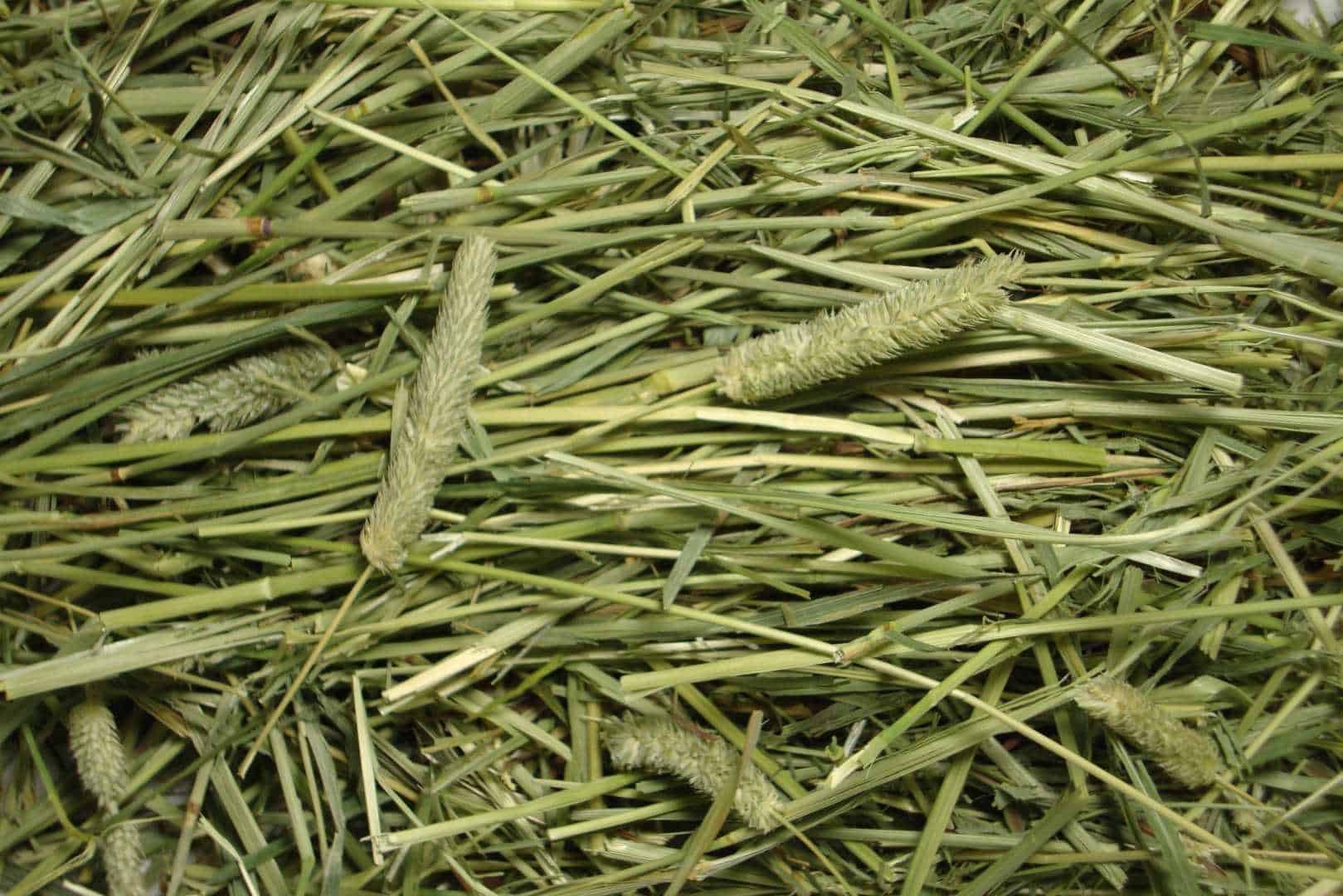 Timothy hay or Timothy grass is a known type of rabbit hay that is best for adult rabbits. The first cut of Timothy hay is a great source of fiber. It is low in protein and fat, which benefits rabbits that need to lose weight. 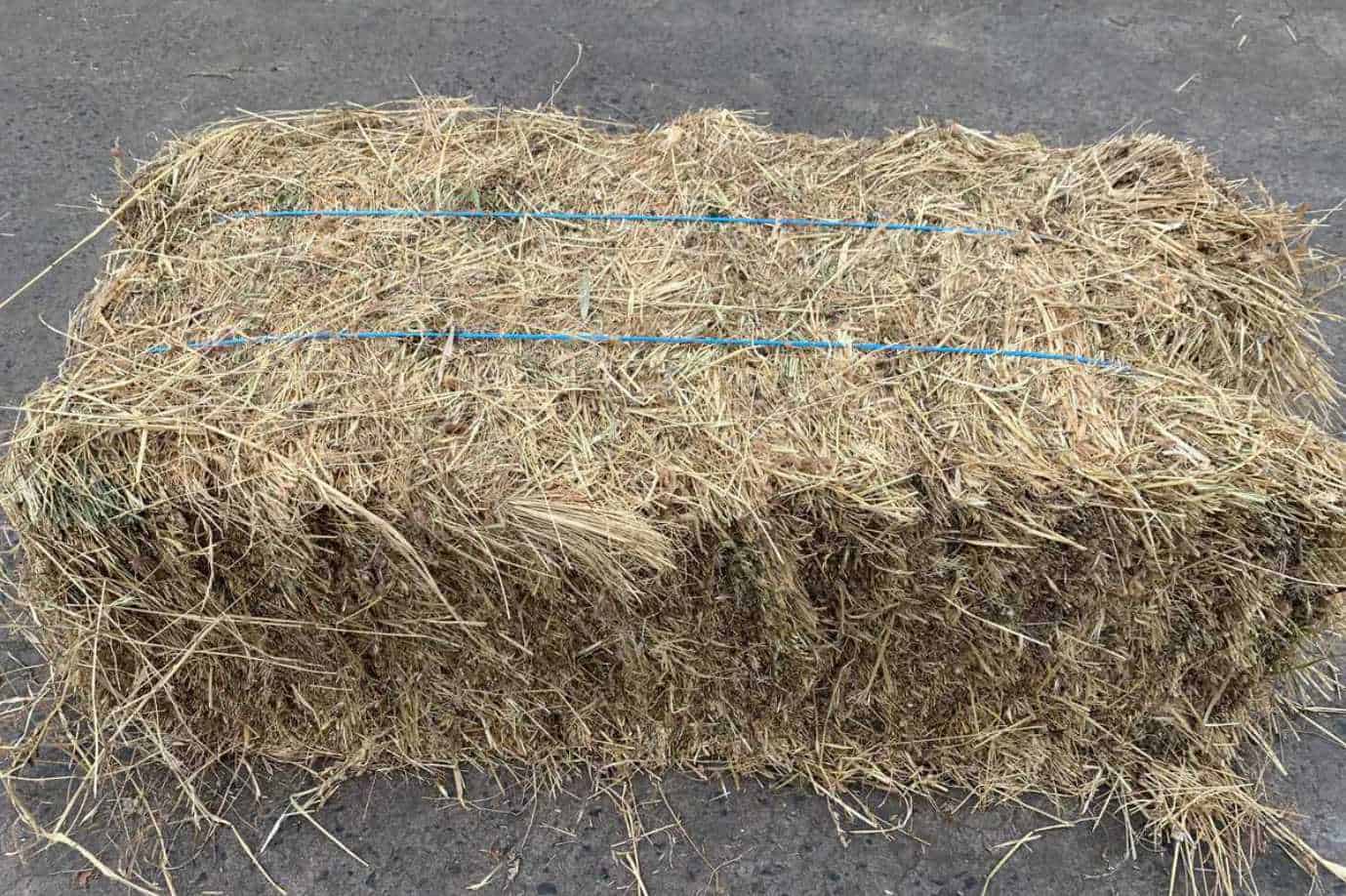 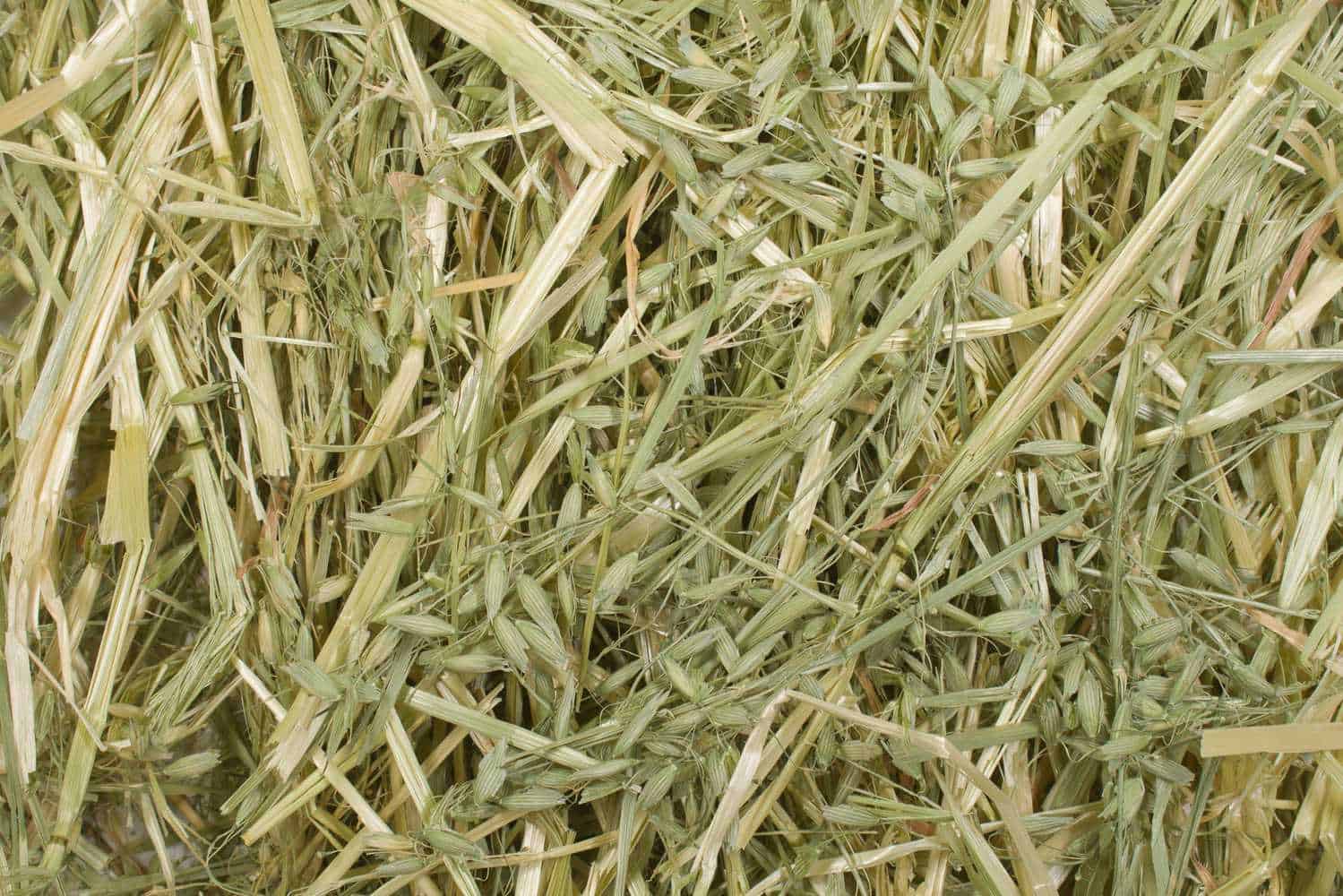 Oat hay is a hypoallergenic substitute for grass. It is the top choice for rabbits that are prone to obesity and weight gain. Oat grass hay is high in fiber and low in fat. For this reason, some experts suggest mixing Timothy grass or hay with oat grass hay to balance the nutrients out. 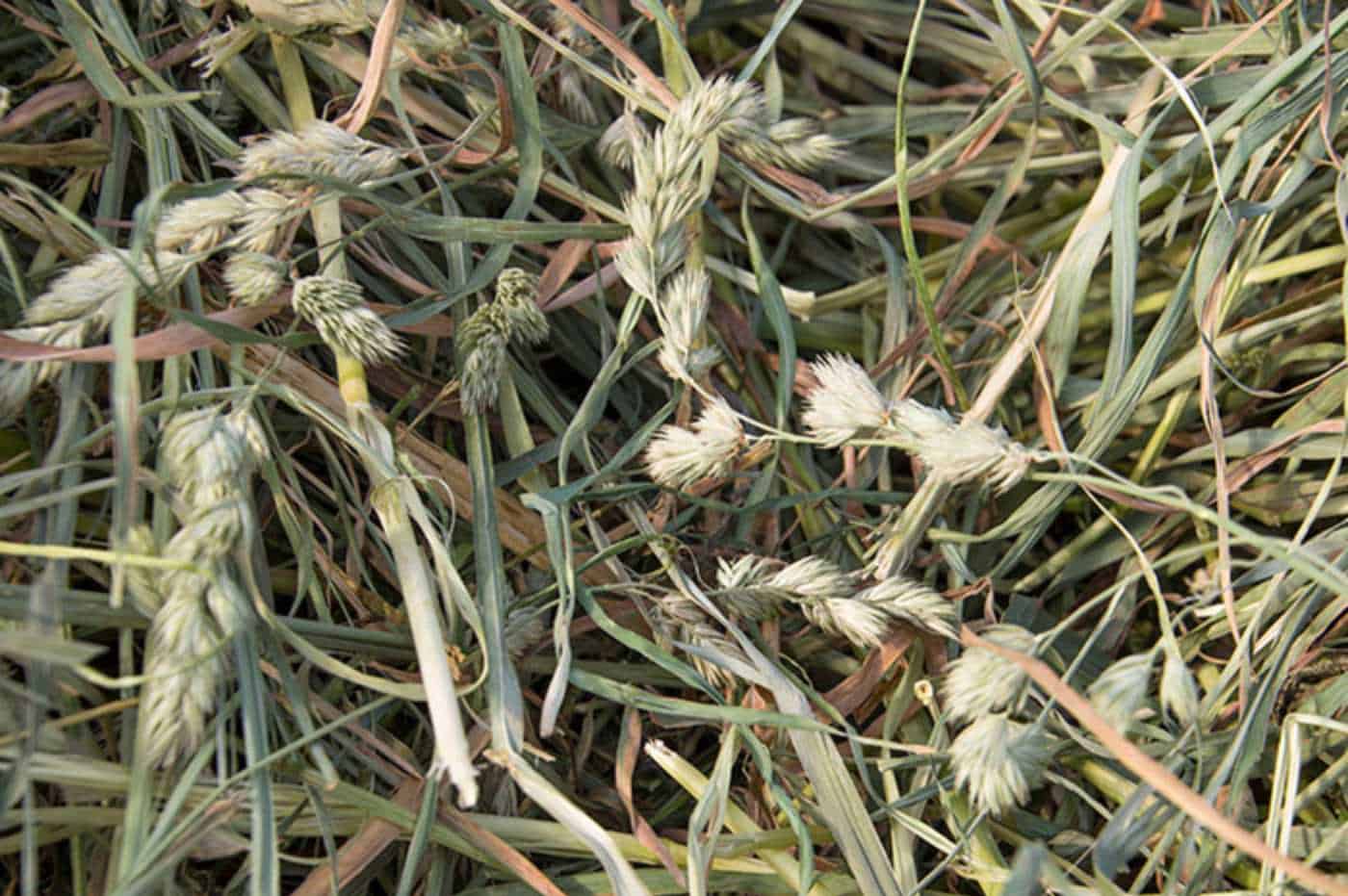 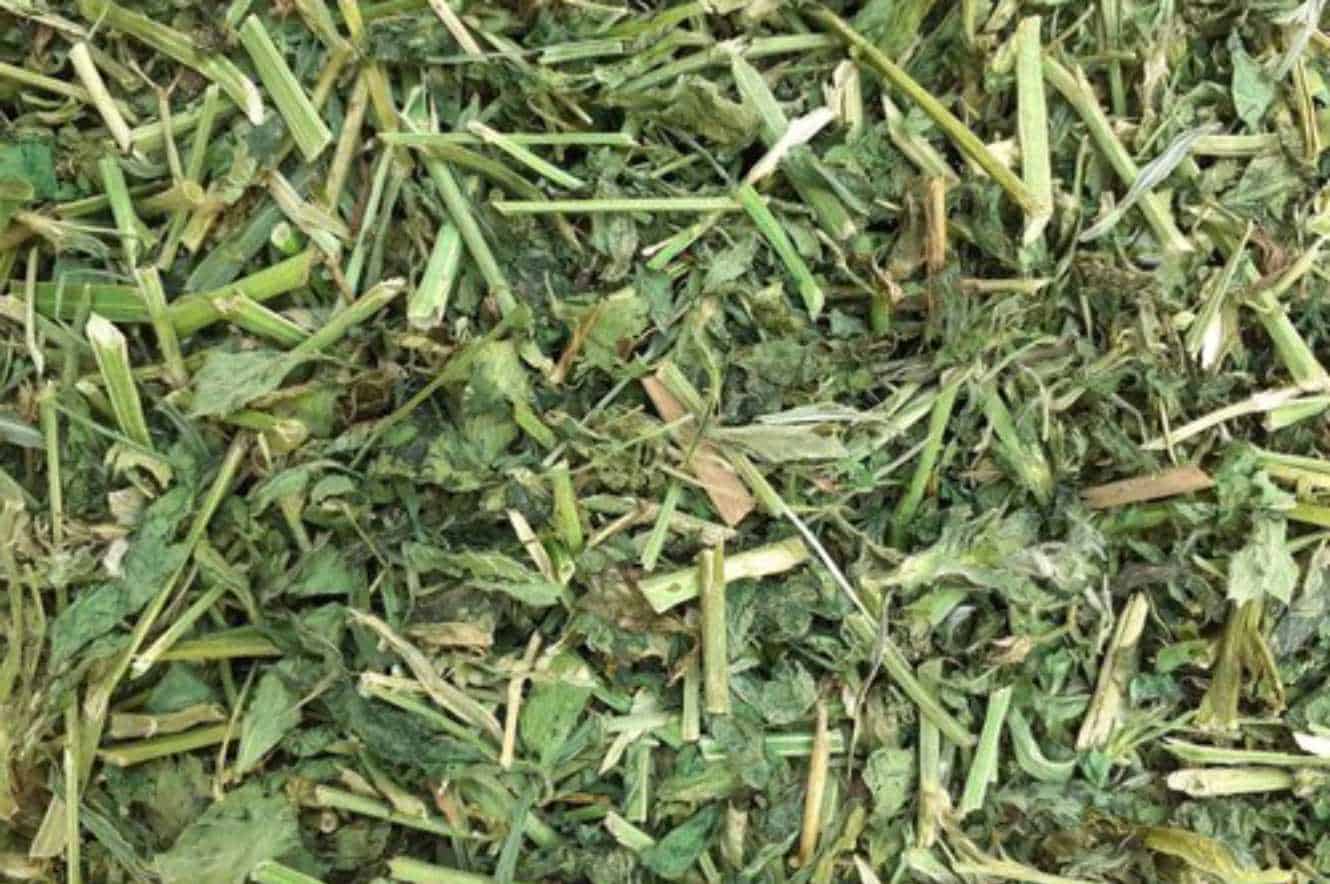 Alfalfa hay is not actually a type of grass. It is a legume. Alfalfa hay contains higher protein levels and calcium contents than the other types of hay. Therefore, this type of hay is recommended for baby rabbits and adult rabbits experiencing troubles in maintaining their weight.

With a great amount of fiber, Alfalfa hay is best mixed with other hay feeds for a well-balanced diet.

If you’re still confused about which hay to shop for, here is a nutritional analysis of the different hay species:

Where to buy rabbit hay

Hay is readily available anywhere. From your local pet shops to online veterinary stores, you’re likely to find suitable hay for your rabbit. The price can go from cheap to expensive, so if you want to cut costs, you should consider buying from local farmers.

The price of a bale of hay from local farms is around $10, which lasts for about a month. When compared to commercial hay, that can be around 5 times less! 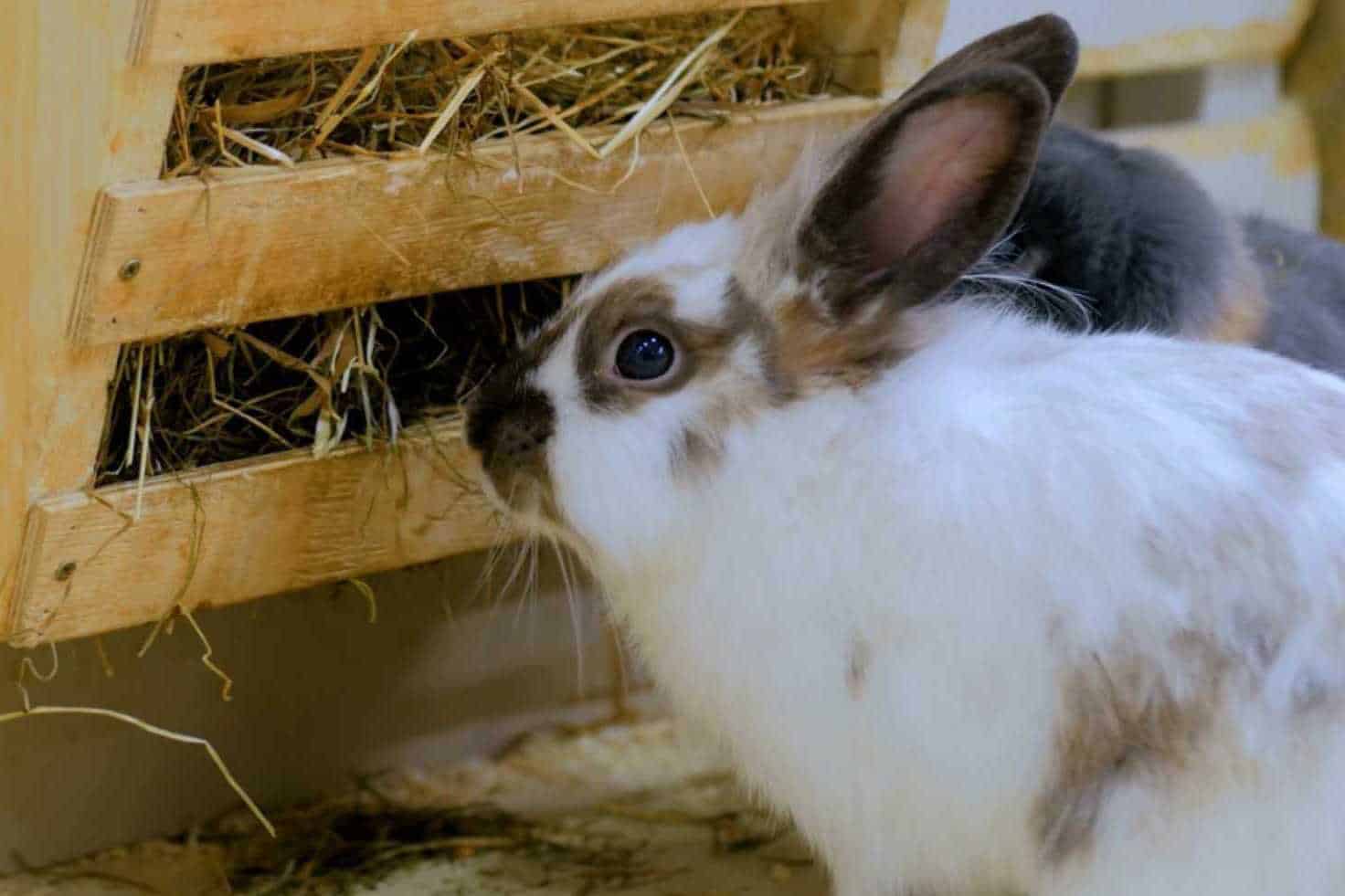 Hay comprises most of your rabbit’s diet. Hence, you might wonder, why is hay the primary source of nutrients for rabbits? How does hay benefit a rabbit’s health? Here are the top benefits that hay provides for your rabbit.

Hay is the best source of fiber for your rabbit. Being high in fiber, hay helps in proper digestion.

2. Hay is good for a rabbit’s dental health

Here’s a fun fact: A rabbit’s teeth can grow as big as 12 cm every year! Because rabbits’ teeth grow constantly throughout life, they need a coping mechanism to balance the continuous dental growth. Hay abrades a rabbits’ teeth and keeps them in a healthy shape.

Rabbits with a low-fiber diet, receiving less hay, will likely suffer from overgrown teeth. Overgrown teeth can lead to malalignment and mandibular prognathism. Another problem with overgrowth teeth is loss of appetite. Your rabbit might veer away from eating nutritious foods because eating them would be extremely painful or uncomfortable with gigantic teeth.

Rabbits with a low-fiber diet will have a hard time with digestion, absorption, and excretion. They may contract GI stasis. GI stasis is a condition when a rabbit’s gastrointestinal function slows down or stops completely.

Rabbits love munching on things. They love being busy, whether by playing, nibbling, or chewing on anything. To keep them occupied, giving them hay is a great idea. Truly, hay is their best friend!

Other uses of rabbit hay

Besides being an essential part of a rabbit’s diet, hay can also be used as bedding for your rabbit’s cage or nest. However, hay might not be the most comfortable option. Hay can be iffy for your rabbit.

Other options that you can try are newspapers, specifically petroleum ink-free ones. You can also look into shredded paper, cellulose, and an old towel as bedding. Your rabbit will surely love laying down and cuddling over these stuffings!

So, how to store hay for rabbits? Well, the first rule is to keep your rabbit’s hay in a well-ventilated area. Doing so will prevent moisture and spoilage which are upsetting for your rabbit’s tummy. Second, be wary of molds. Properly stored rabbit hay that’s moisture-free and mold-free can last up to 6 months or even longer!