One of the features that pet owners consider in choosing a rabbit is its color. White seems a favorite option among the many colors available since it looks so clean and fresh.

If you’re also thinking of getting a pet with this hue, please check out these 7 white rabbit breeds to help you decide. 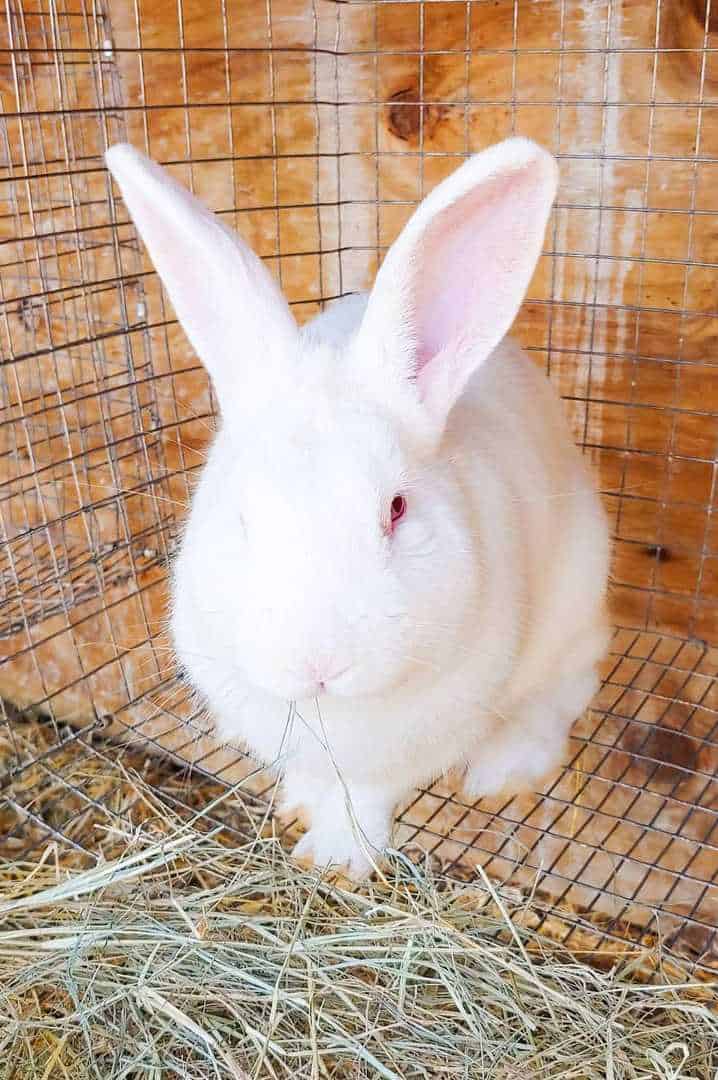 The American White Rabbit was initially bred for its beautiful, lush coat. In 1917, a breeder developed this breed in Pasadena, California, and named it German Blue.

In 1920, the same breeder created the white variety with red eyes. Then, the American Rabbit Breeders Association (ARBA) recognized the breed in 1925.

After World War I, officials changed the name to American White Rabbit. Presently this variety is bred mainly for meat, fur, and shows.

The rabbit’s thick, soft fur needs regular grooming and maintenance. It has narrow, tapered ears and red-colored eyes. The adults of this medium-sized breed usually weigh around nine to 11 pounds.

It has a semi-arched back, and its body shape is typically compared to a mandolin. Its dense quality comes from muscular, thick-boned frames.

The American White Rabbits is known for its sweet and affectionate demeanor, traits that make them excellent pets.

However, they can be skittish when faced with potential danger and bite when threatened or hurt. They can also be wonderful mothers not only to their babies but also to other bunnies.

This white rabbit breed can rack up a big appetite for timothy hay, kibble, and green, leafy vegetables. It loves playing, but it takes its sweet time in roaming.

Its hair may be lush, but it only requires minimal grooming. A once-a-week brush is enough to keep the fur shiny and smooth. However, during shedding season, it will need a twice-a-week brushing. 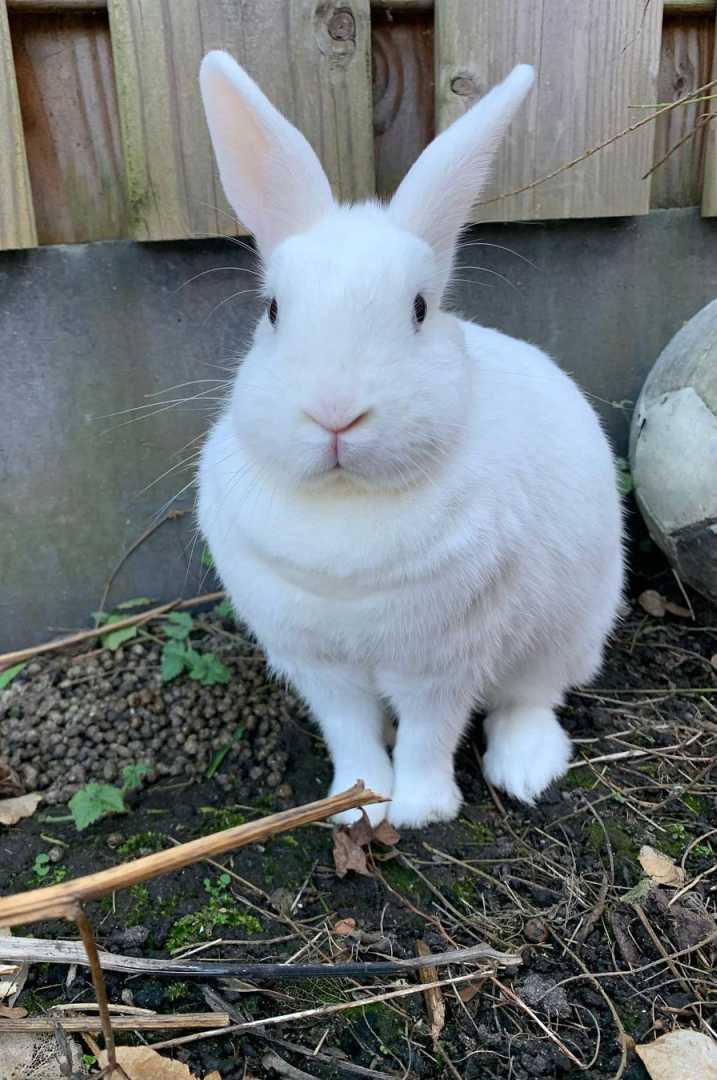 In 1977, rabbit enthusiast Mr. J de Graff developed the variety intending to create a white bunny with blue eyes. The breed’s name originated from a district in the Netherlands called Hulstlander.

Also known as the Hussie, the Dutch National Rabbit Association accepted the breed in 1984. Then in 2022, the British Rabbit Council added this rabbit under the Rare Breeds category.

The Hussie has a short and compact body with well-developed front legs and hindquarters. It has firm muscles that cover the whole body.

It also has bright, clear, and lively eyes that add to its intelligent look. Its large and thick ears form a “V” shape. This white rabbit breed has dense and lustrous medium-length fur.

Hultslanders have a natural curiosity that they express through standing on their hind legs to observe their surroundings. They love to sniff around whenever they can.

They’re also very playful, friendly, and outgoing. These energetic bunnies can grow to be highly affectionate and can even recognize their owner by their voice and sight.

These rabbits can stay indoors as long as the whole house is bunny-proofed. Their inquisitive nature might get them into trouble, so securing all cords, chemicals, and other potentially dangerous items at home would be best.

If they are staying outdoors, make sure that they have a broad and safe area to spend all their energy. Their dietary requirements are the same as any other rabbit of their size. 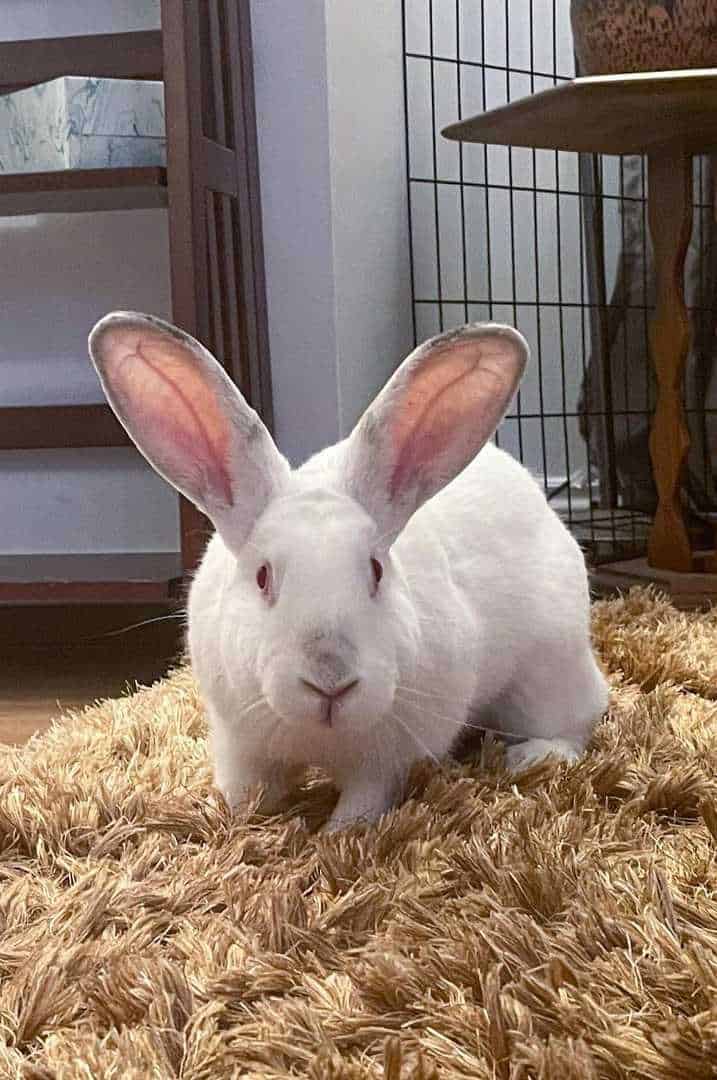 Contrary to its name, this rabbit breed did not originate in New Zealand. It was the first rabbit breed to be developed in the US.

During the first parts of the 20th century, American breeders crossed the genes of the Flemish Giant with those of the Belgian Hare with the hopes of creating a show-type quality, meat-producing rabbit. The creation of the Albino variety followed not so after.

The New Zealand White Rabbit is the inspiration for the Easter Bunny. One of the distinct features of this rabbit is its “barely-there” neck. Its muscular and strong-looking neck matches its overall and well-shaped body.

It also has small, deep red eyes that are alert and bright and ears that stand tall and erect. Their short and dense fur requires minimal grooming.

Animals bred for meat and fur are generally docile, and the New Zealand White Rabbit is no different. This breed is friendly and easy to handle, making them perfect as children’s pets.

However, it needs socialization at an early age to ensure comfortable around people. This bunny loves being held and petted and wouldn’t mind being on its owner’s lap for hours. It’s also not known to be aggressive and rarely kicks or bites.

This large breed needs an adequate enclosure to allow them to sleep, eat and rest. A hutch that measures 30 x 36 inches will be enough to keep them thriving.

It also needs opportunities for socialization, human interaction, and lots of cuddling. Like any other breed, the New Zealand White Rabbit needs a generous amount of timothy hay and leafy greens. 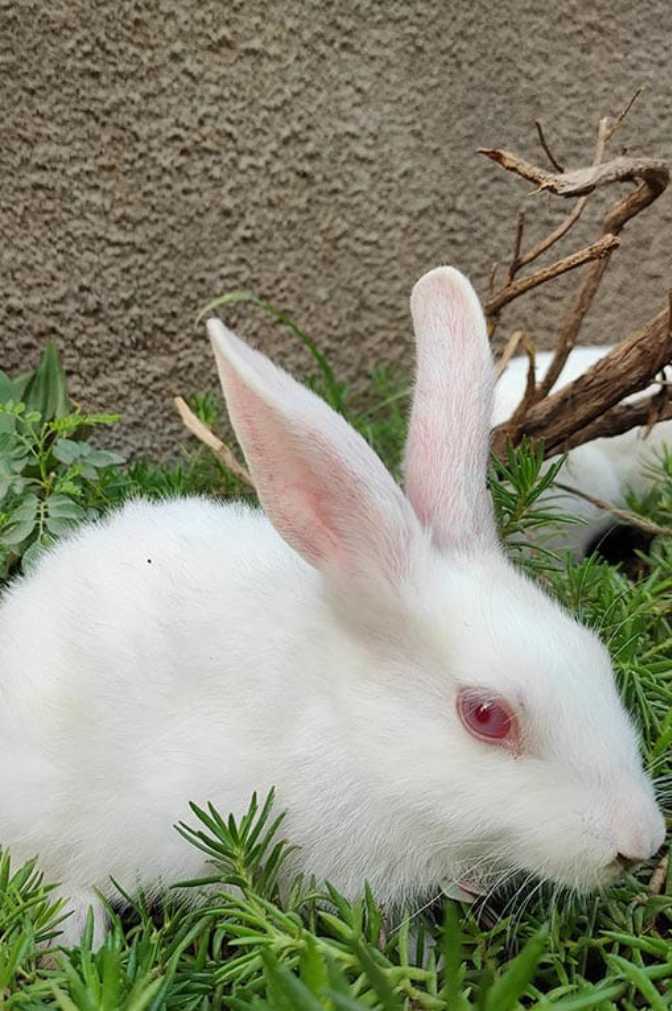 Belgian breeders created this breed by crossing the Beveren with the Flemish Giant to develop a heavy meat rabbit. Due to their physical characteristics, some breeders supply them to meat trades.

However, as time went by, some owners realized these attractive and docile animals could be pets, too. They are now recognized by the ARBA and the British Rabbit Council or BRC.

What sets this rabbit apart from the other white breeds is that they are entirely albino. It has all-white claws and a coat that gives them a distinct look and a faded pink hue surrounding their straightforward, ruby eyes.

The male rabbits have rounded skulls, while the female ones have narrower heads.

Breeders did not originally breed rabbits to be companions, but their calm and curious temperament made them an ideal pet.

However, they are not recommended for owners who have no experience raising rabbits. They have a powerful kick that can injure someone who tries to carry or restrain them.

Since Blanc de Termonde is a reasonably large breed, it requires a cage that’s four times its size. It also needs enough space to roam and play freely. It’s an energetic breed, so multilevel cages and lots of toys will keep it busy.

Their diet mainly consists of hay, pellets, and crunchy vegetables. Owners should avoid giving this rabbit too many sugary fruits, which may make them overweight. 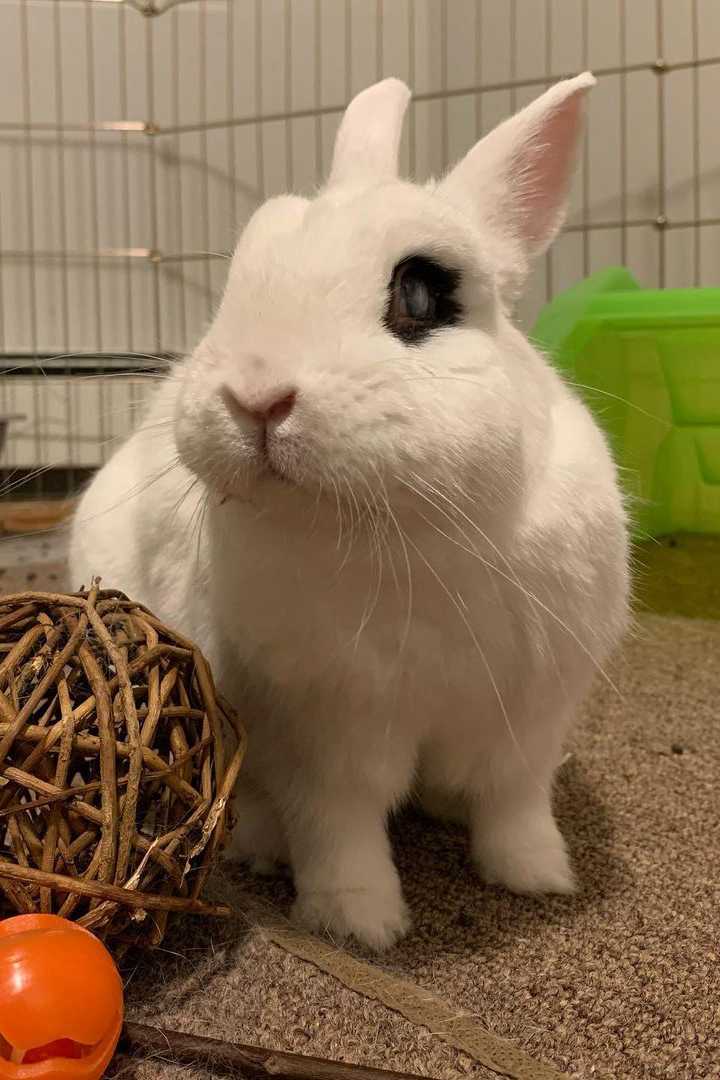 Despite this breed’s name, the Dwarf Hotot is not a miniature variety of the large Hotot. It was created using several regular-sized Hotot breeds. The Dwarf Hotot bunnies came to life due to the breeding efforts in West and East Germany during the 1970s.

Breeders crossed the Netherland Dwarf and the White Hotot to develop the Dwarf Hotot. In 1983, ARBA recognized the breed after a rabbit enthusiast brought several of the rabbits to the US.

The Dwarf Hotot is called “eyes of fancy” for its striking black eye bands. Combine these mesmerizing eye features with their chubby and compact bodies, and you get a breed that stands out from other white rabbits.

Their eyes resemble those of the Netherland Dwarf, but their flat faces make them easy to pinpoint from a group. This breed’s dense coat and shiny coat stay upright when smoothed out.

Generally, this breed is friendly and calm, making them ideal pets. However, they need to get as much socialization and human interaction possible. These dwarf rabbits can become attached to their owners quite quickly.

Their human companions need to be careful when opening their cages because bunnies are known to jump out of their cages due to excitement.

Dwarf Hotot bunnies are generally healthy and robust, thanks to their breeders, who ensured they crossed individual stocks.

They need an excellent supply of timothy hay and clean water to thrive happily. Despite their size, this breed still needs a wide enough space for them to satisfy their curiosity. 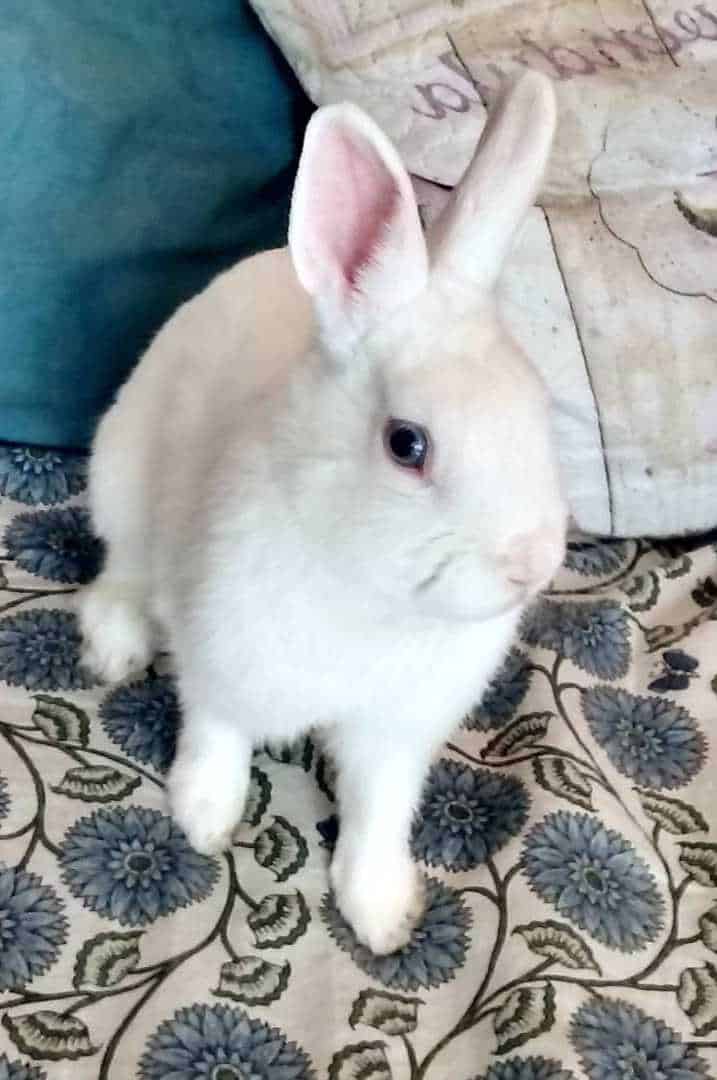 In the early 1900s, an Austrian railway official named Wilhelm Mucke aimed to develop a medium-sized white rabbit that didn’t have the usual red eyes of most white breeds.

It took him fifteen years to achieve his goal, and he was able to create one of the most famous European rabbit breeds.

He crossed Dutch Rabbits with the white varieties of Holland Lop and Flemish Giant to develop a pristine white rabbit with white adorable blue eyes we know today as the White Vienna Rabbit.

These white rabbits have a long, cylindrical body made more robust due to their well-developed muscles. Their large necks are supported by a short neck that disappears when they sit.

The bunny’s furry and erect ears measure about 11-12 cm long. They are well-known and loved for their deep, blue eyes. Their pure white, medium-length fur is soft and lustrous.

If an active and energetic bunny is not your type, then for sure, you’ll love this laidback breed. Its sweet and docile nature are perfect companions to seniors and individuals who need to leave their rabbits while at work.

This breed would not get easily bored and thrive even with less socialization. They are initially shy, so it would be best that their owners interact with them even for a few minutes every day.

This breed requires the same care as other large-sized rabbits regarding their diet and living arrangements. However, it would be best to note that this rabbit needs to be carried carefully. It can swiftly jump out even from a tight grip, leading to severe injuries. 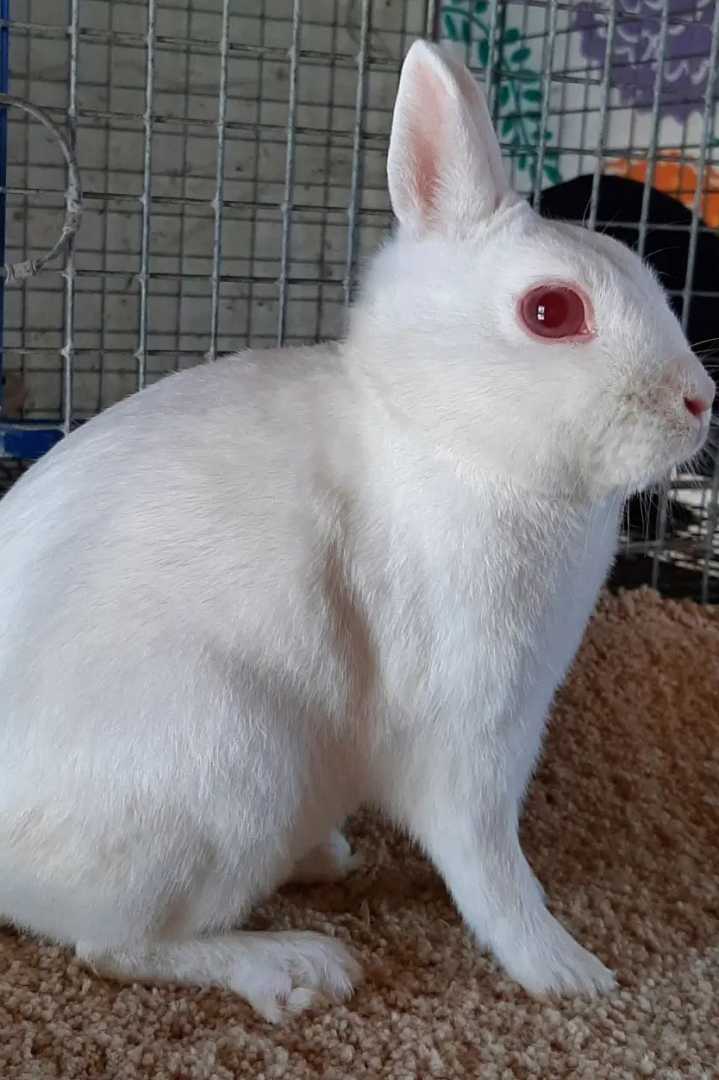 During the 1800s, exhibiting rabbits in shows became very popular, so breeders started to teach their Britannia Petites to pose or stand on their forefeet. This selective breeding process created a bunny that has a fine bone structure.

The British Council calls this breed Polish Rabbit to honor the breed where it originated from. However, ARBA decided to change the name to Britannia Petite since there is already an existing Polish Rabbit.

Britannia Petite rabbits look like a quarter of a circle when viewed from their side. There is a pronounced arch from the base of their neck up to their tail base. Like a Shih Tzu dog, their eyes appear to protrude from their heads.

This breed may be tiny, but it is a ball of energy. They are usually high-strung and would require an experienced owner to take care of them.

These rabbits will require the same care as the other miniature rabbit breeds. However, it is crucial to know that they should not be kept outdoors as much as possible. The bunny’s tiny size makes them easy prey for predators.

If you decide to choose a white breed of rabbit, you’re in for a joyful experience. All  7 white rabbit breeds have engaging dispositions and unique features.

Some bunnies are perfect docile companions, while some have energies that can rub off on you. The most crucial thing is to know how to care for them no matter what color they are.