Want to learn more about the American rabbit? Well, you came into the right place. We will tell you about American rabbits’ background and history, overview, and care guide. 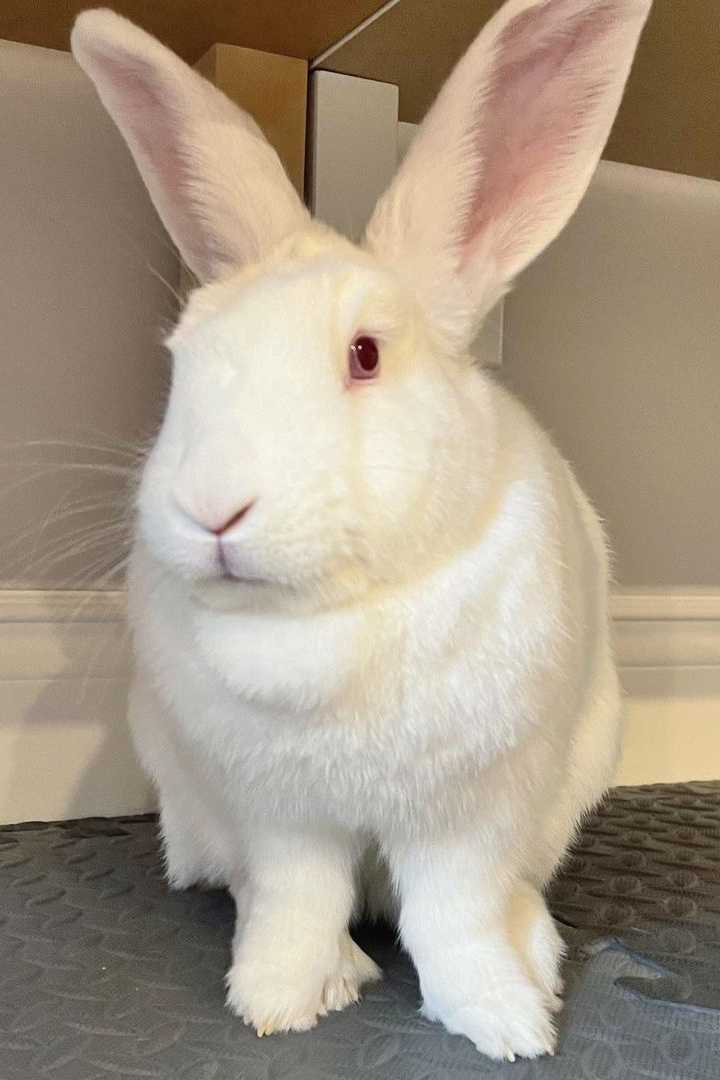 During the 1950s, American rabbits are famous due to their commercial use for fur and rabbit meat production. However, as more breeds meant for fast-paced production showed up, the population of American rabbits started to dwindle. 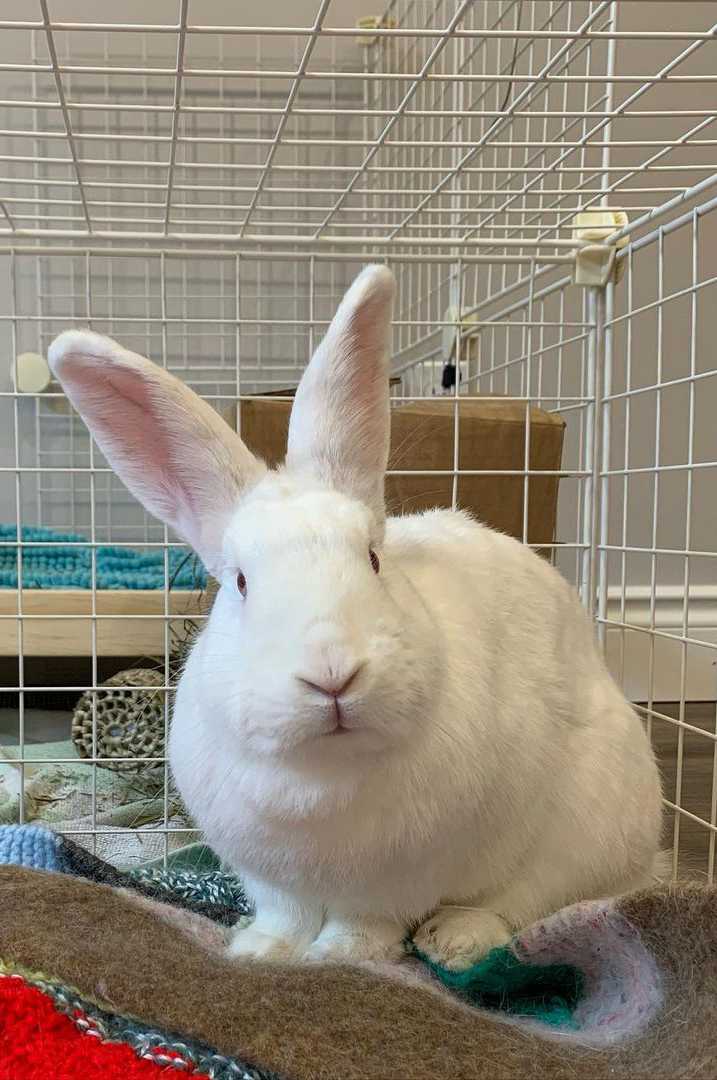 The American rabbit is pretty standard in weight in appearance. The rabbit can weigh around nine to twelve pounds in its maturity. The does tend to be larger, averaging about 11 lbs. Meanwhile, bucks are approximately 10 lbs.

Their body shape is semi-arched or mandolin. It means that the back of the rabbit is not a perfect curve when viewed on the side. There tends to be a tiny flat space where the slope starts. Since the breed is mainly for meat, it has a small bone density and a more significant muscular body type. American rabbits have strong and straight, sturdy legs.

Their head is standard with their body size. It’s relatively narrow in shape, especially along the snout. The ears of the American rabbit are medium in length and sit upright. The American rabbit’s fur has two variations, blue and white. There has a solid color fur with no markings along with the coat.

Their fur is dense but silky in texture. It’s soft to the touch and flyback, which means it can be combed to the hair’s original direction by petting the fur backward. 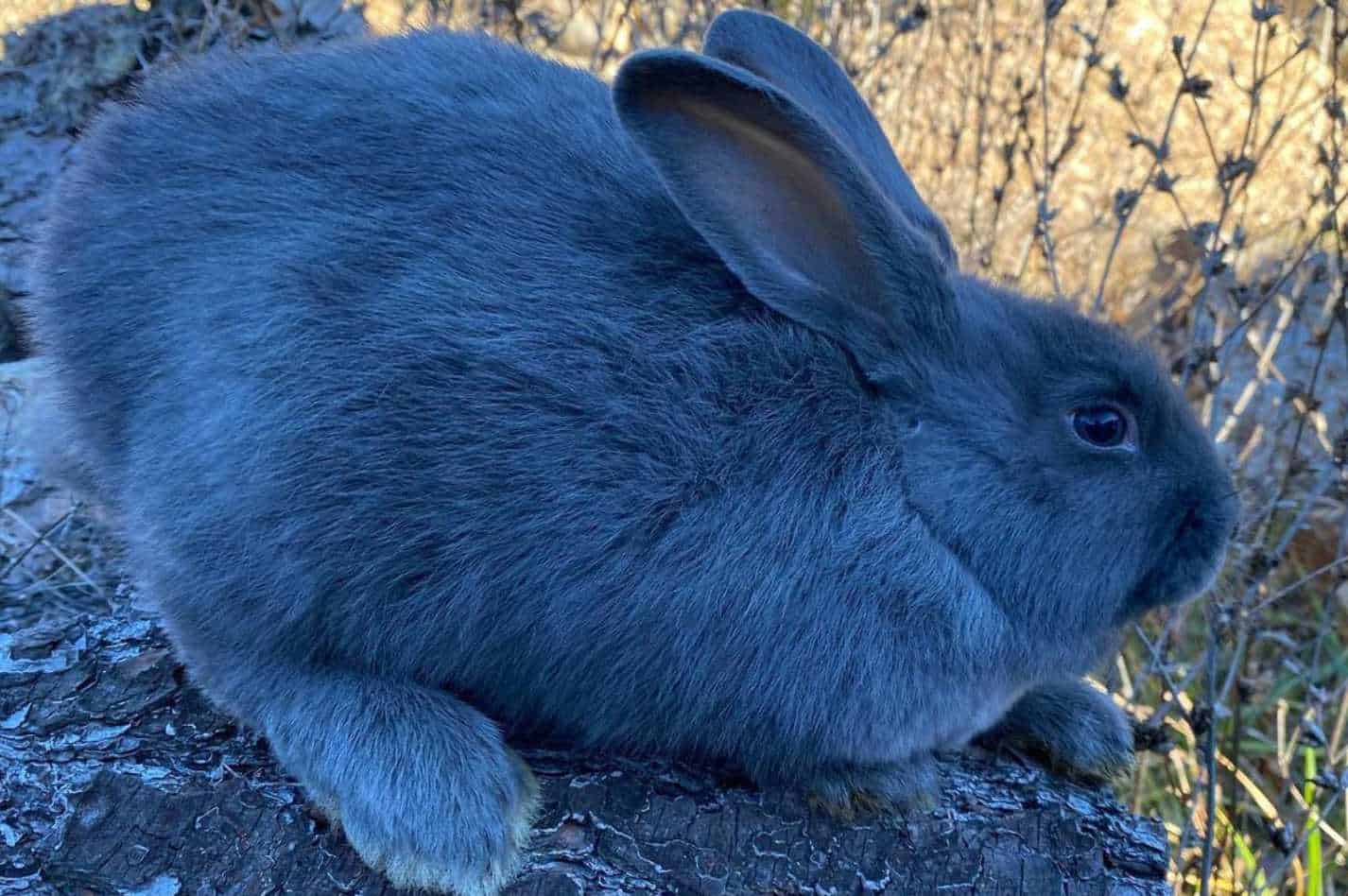 American rabbits are known to be docile, gentle, and calm. Due to their larger size, they are less active than smaller breeds. Although, they will still partake in playful activities.

American rabbits are good for petting due to their gentle nature. As long as they don’t feel threatened, the rabbits will not show any aggression while being petted or groomed.

As stated, American rabbits are more on the quiet side rather than the playful breed. Although they will indulge in running around and playing, they tend to hang around with their owners.

Even though the American rabbit is mainly used for commercial production in the past, they don’t have any problem playing and hanging out with their human handlers.

The rabbits can form bonds with their owners with enough love and affection. It’s recommended not to keep them in enclosures and cages to help them socialize with humans and other rabbits. Due to their size, having a grassy patch and outdoor backyard will also help a lot.

They will let their handler pet and groom them without any adverse reaction. The rabbits are generally docile, gentle, calm, and affectionate as domestic pets. 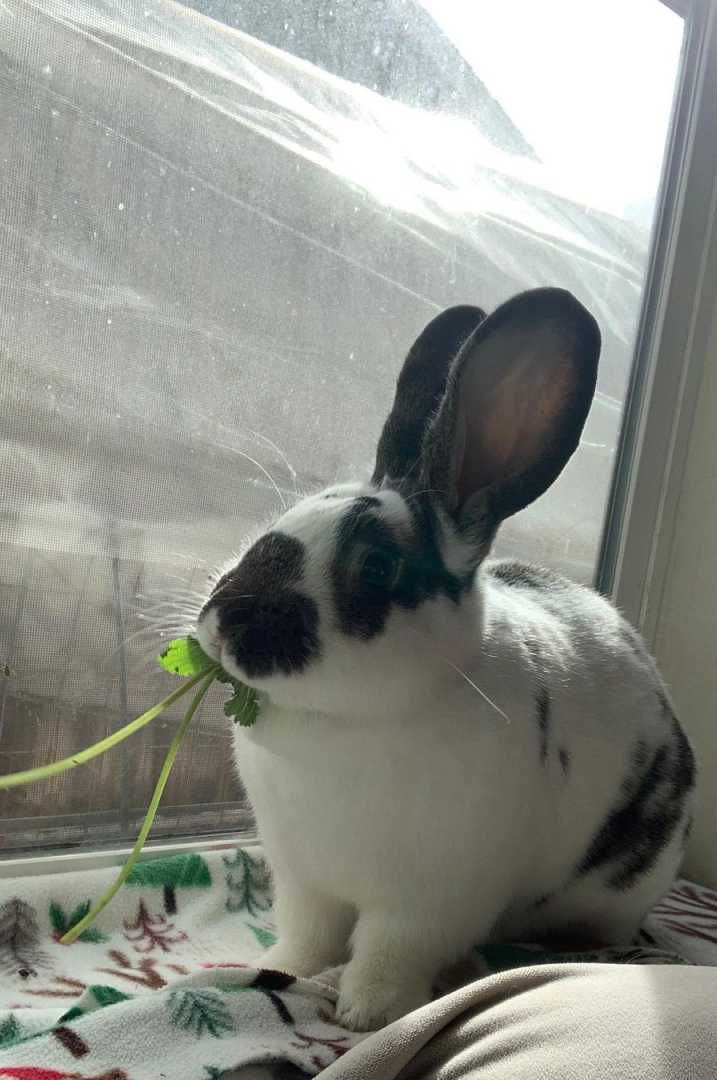 The gentle nature of American rabbits makes them a good companion for the elderlies, as long as the older folks can provide the space and proper needs of the rabbit.

They are also less active, so elderly owners don’t have to exert themselves trying to match the playful energy of other breeds. Most elderly also have a space and home where rabbits can freely roam around and get their proper exercise.

Although children and American rabbits can go together as long as the kids know how to handle the animal, there are many risks involved. The American rabbit is more prominent in size compared to other breeds. Their more humungous size can mean that they are harder to carry for children.

American rabbits are often affectionate, gentle, and calm, but they can also get protective when they are hurt or threatened. Rabbits tend to nibble and bite on the hands of human handlers, which causes them discomfort. The bite can be understandable for adult owners as it’s just the animal’s instinct, but it can cause resentment or trauma to the kids.

Although the sudden aggression happening is very low on the scale, it’s better to proceed with precautions.

American rabbits are not suitable for close and small apartments. Due to their larger size, they need more space to run around and play. They also need a giant crate or housing that might not be possible when housed in an enclosed space. 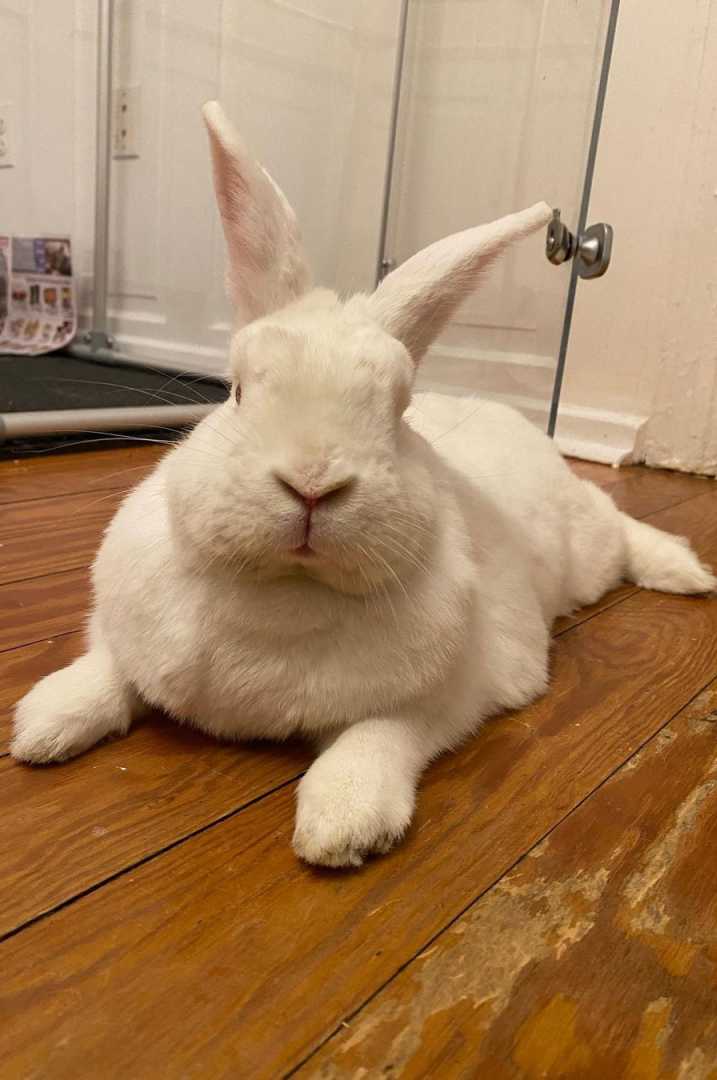 Rabbits are susceptible to many viruses and diseases compared to other domestic pets. Here are the common health issues present in American rabbits.

Dental problems such as malocclusion or the misalignment of teeth are relatively common in rabbits. Since their teeth are constantly growing, not providing them with the proper diet can result in their teeth’ size exceeding the recommended length.

Fortunately, most owners can quickly solve the health risk by providing a good hay and grass diet. Placing a woodblock near their bedding space can help grind their teeth down as they tend to nibble on those.

Fleas are pretty common on household pets and humans. They stick into the fur or hair and feed on the blood, so the thick coat of the American rabbit makes them more susceptible to the parasite. They can be pretty dangerous as most species of fleas can pass from animal to animal.

They also bring a slew of viruses and infectious diseases that may spread through the blood. There are various ways to get rid of fleas, including sprays, soap, and oral medication. You can consult your veterinarian for the best solution for you.

Concerning the American rabbit’s thick fur, they are also prone to wool blocks. The wool block results from the blockage in the rabbit’s gastrointestinal tract due to the ingestion of their fur. It can cause bloating, diarrhea, and loss of appetite.

When rabbits don’t get their proper nutrients, they are more susceptible to various diseases, which is one of the most long-term devastating effects of wool block. However, they are avoidable by regular and proper grooming habits.

Gastrointestinal stasis is when the rabbit’s digestive system comes to a halt and stops the nutrient absorption process. This can come from many other health issues such as lacking fiber in the diet, viruses, or parasites. The disease is characterized by loss of appetite, less volume of feces, and bloating. Contact the vet immediately if you suspect that your rabbit is undergoing this disease. 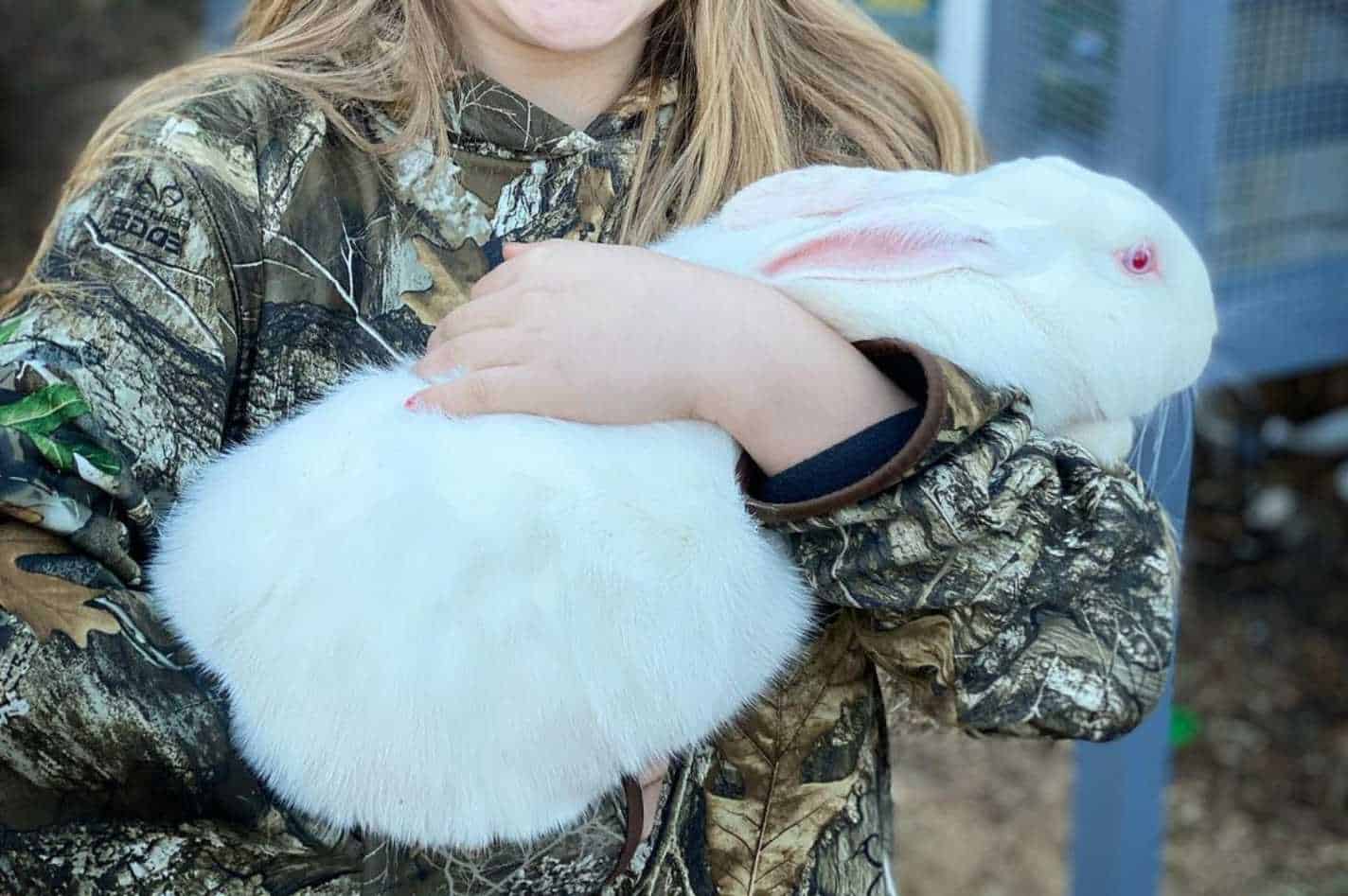 Here are some tips to better take care of your American rabbit.

Although American rabbits’ fur is relatively sort, it’s also thick and full. You don’t have to worry, as inexperienced owners can do the job. You can refer to this tutorial to know more.

Grooming and cleaning can be done once or twice every month. Combing the fur daily can help increase the overall health of the American rabbit’s coat. It can also keep fleas away and reduce the risk of a wool block.

Rabbits don’t take a bath the way other pets usually do. They are susceptible to water temperature, so submerging or pouring it into them can cause cardiac arrest or stroke. To clean rabbits, owners do it by spot-cleaning and dry baths.

One of the only times water is used is by dunking or soaking a garment or using it as a cleaner for the rabbit’s anus.

Kits or baby rabbits are not allowed to eat anything other than grass and hay. This diet will help them grow and provides them with their most needed vitamins and nutrients: fiber, calcium, and protein.

Mature rabbits aged one year and above should follow their strict diet of eighty to ninety percent hay. The other ten to twenty percent of their diet can consist of leafy greens and fruits.

Rabbits don’t need any fancy chemicals or toothpaste to keep their teeth free from cavities. If the owner follows the proper diet for rabbits, there shouldn’t be much of a problem in their dental health.

Keep in mind that the teeth of rabbits constantly grow throughout their life. Providing them with the proper diet of primary hay and grass helps grind down their teeth and decreases the number of oral problems.

American rabbits are giant. This means they need a larger space to roam around and get their daily exercise. Their crate and cages will be larger too.

Having a vast roaming space for rabbits can help them connect to their primal grazing instinct. Rabbits love to forage for various plants, flowers, and grass.

What is the American Rabbit Used For? 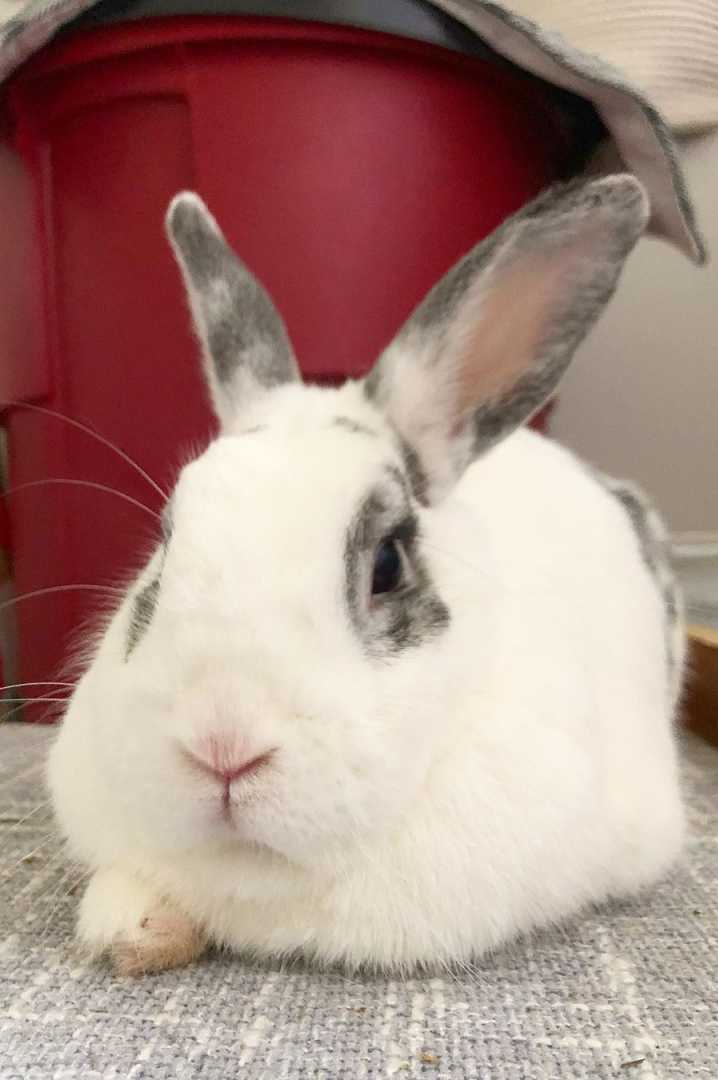 American rabbits have grown in popularity as a domestic pet, especially around the early 2010s when their population has increased. With that said, the rabbits can cost a lot as they are still considered a rarity. They often need to come from breeders that specialize in the American rabbit.

Due to its rarity, large size, and solid-colored fur, the American rabbit is also used as a show rabbit. Most of the time, the breed is judged by the condition and color of its coat. Their overall body structure, such as head, ears, and body shape, will also contribute.

Although the American rabbit can still play around their owner, they are almost dipping on the lazy type of rabbit breeds. Training them with tricks might be challenging, especially to an inexperienced owner.

Commercial use is one of the primary functions of the American rabbits, especially during the early to middle of the 20th century. They have a small bone density and a muscular body, increasing the meat they produce. Their fur is also valuable since it’s a solid color without markings.

However, many breeds were born during the middle to late 20th century, resulting in the dwindling population of American rabbits. They can still be used in the commercial space, albeit sparingly and mainly for their fur, which is rarer considering they are endangered.

There are many things unique and charming about the American rabbit. Whether you are looking forward to adding the rabbit breed in your home or just looking out for knowledge about rabbits, we hope this article is informative and helpful to you.