If you have a flemish giant rabbit or want to own one, it’s good to know the basics about them before diving deeper into taking care of them.

Taking care of a pet requires patience and dedication and a good pet owner knows essential details about their pet. This way, they can provide their pet with the best life possible. 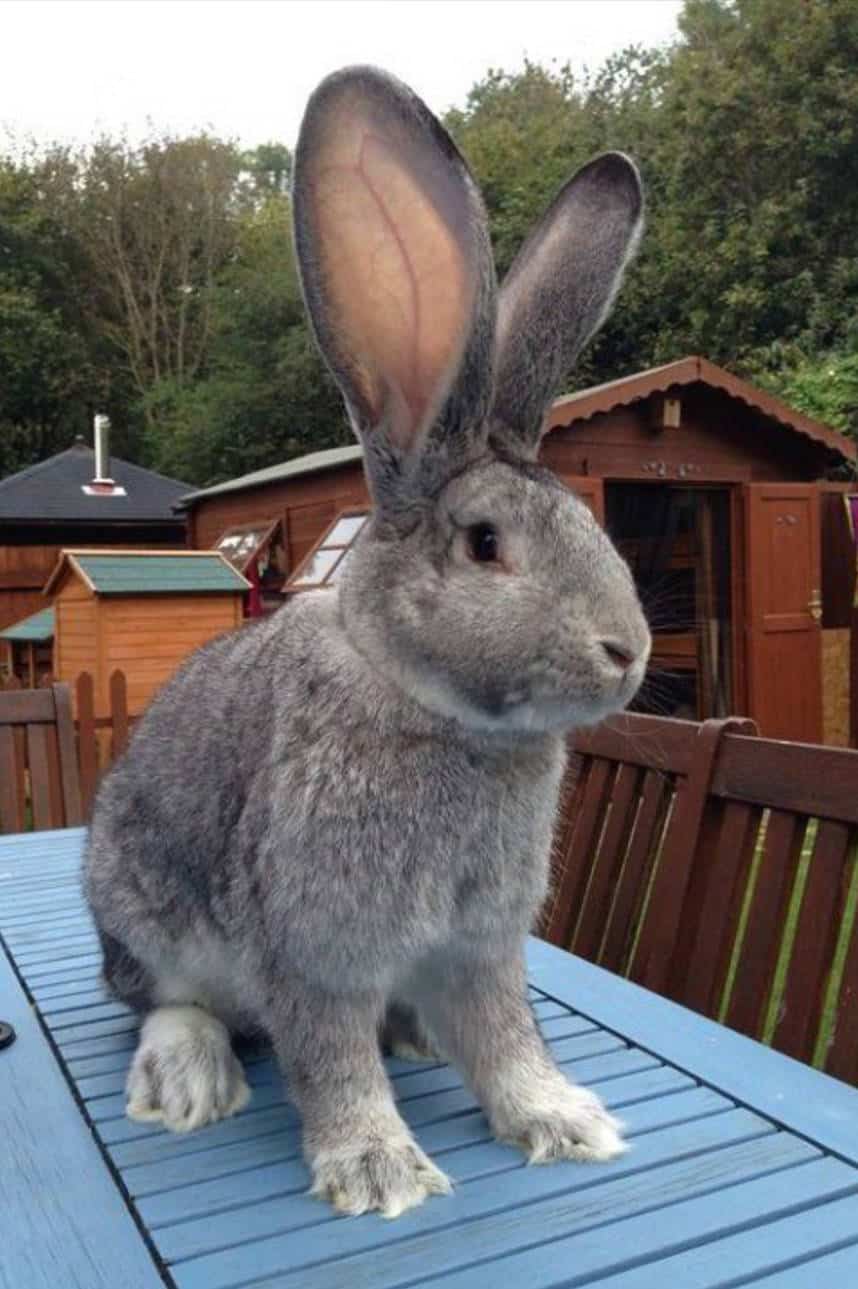 History and Background: Where Do Flemish Giant Rabbits Come From?

The Flemish Giant Rabbit with the scientific name Oryctolagus cuniculus domesticus is, as the breed name suggests, a huge domestic rabbit.

These rabbits are usually regarded as the species’ most giant breed. Flemish Giants were initially cultivated as a good breed for fur and meat but nowadays are also popular as pets because of their docile and gentle characteristics.

Flanders is the home of the Flemish Giant. It was first bred in the 16th century near the Belgian city of Ghent. However, the origin of this ancient breed is unknown to scientists.

The opinions and beliefs about the precise origins of this breed are divided. Some believe they are descended from Patagonian or Stone rabbits. These were also meat and fur breeds like the Flemish Giants.

Others claim they are descended from the Argentinian Patagonian rabbits. In conclusion, queries about their origins remain unsolved up to this day.

However, information about their arrival in the States exists. The Flemish Giants breed arrived in America during the 1890s. They have been from Belgium and England, and in the year 1893, the first standards for the Flemish Giant rabbit were written.

Over time, the Flemish Giant Rabbit breed has become the parents of various rabbits around the world. The famous Belgian Hare, which was usually the breed transported into England in the middle of the 19th century, is one.

And so, their journey continues. In the early 1900s, the United States finally got to know these rabbits even though they had already arrived for quite some time. They have only begun appearing at livestock exhibits during the 1900s.

This was also when the A.R.B.A. or the American Rabbit Breeders Association recognized the breed.

How Do Flemish Giant Rabbits Look? 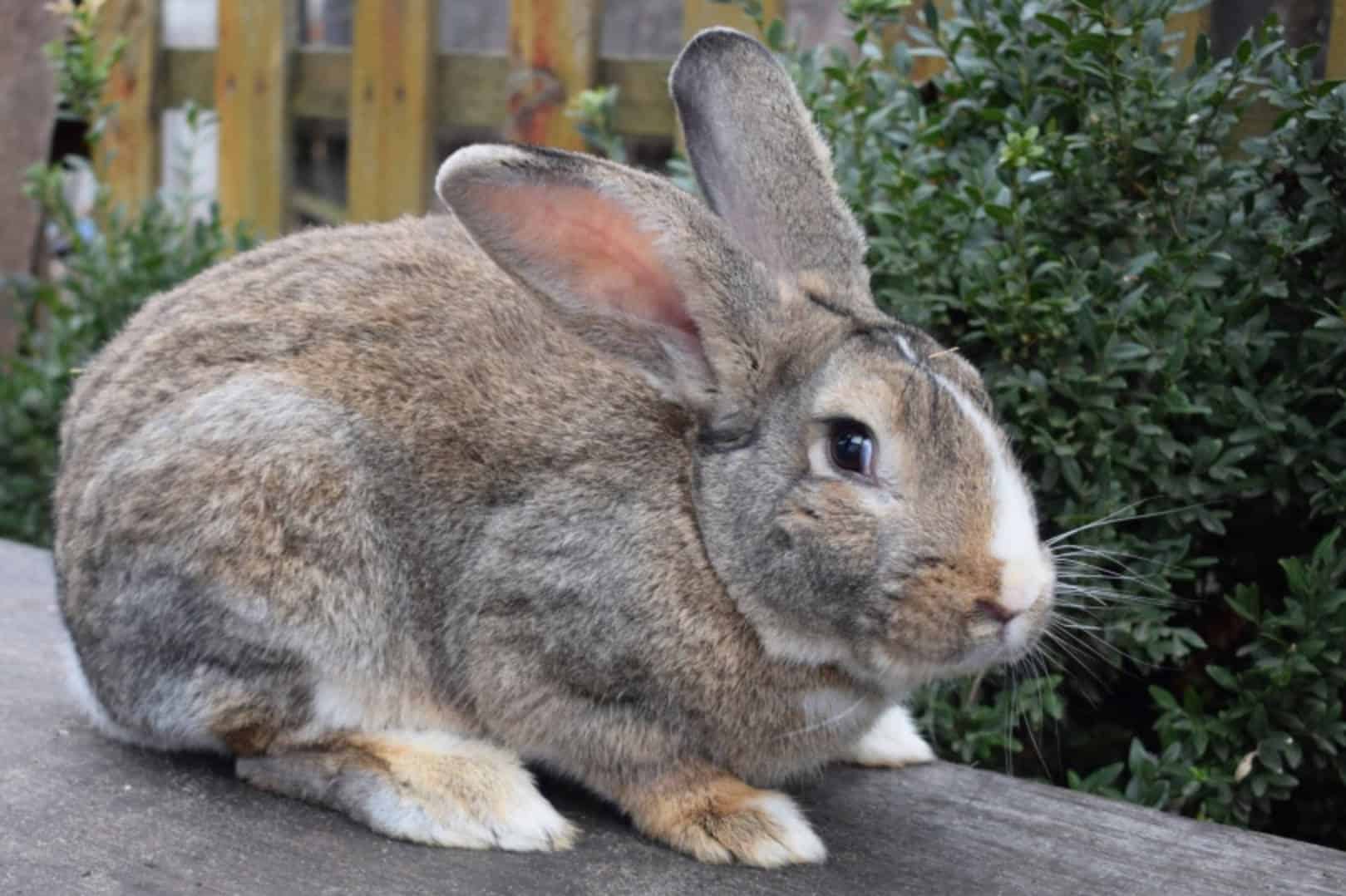 Aside from being huge, Flemish Giants also have long bodies, broad backs, solid and muscular legs which are all helpful for the rabbit’s survival. As rabbits are known for their ears, this breed’s ears are enormous, complementing their bodies.

Flemish giants have a thick undercoat that allows them to withstand colder temperatures. On the other hand, they can’t endure the heat well because of their thick coat. If you reside in a warm environment, you might want to think if you are up to the challenge.

They might also be susceptible to hair mites and ear mites, so you need to examine their ears thoroughly when combing them. Again, a good environment is required for them to avoid stress.

These types of rabbits also have smooth, glossy medium-length hair. This rabbit breed is available in a wide range of colors like the following:

Bucks have a more giant, more massive head when compared to does. While bucks are bigger than does, they mature slightly longer and can take up to 1 and 6 months to achieve full maturity.

On the other hand, does can have a full, prominent, evenly carried dewlap, the fold of skin under their chins. These female rabbits mature quicker and can mature in about a year.

The typical weight of a Flemish Giant Rabbit is 15 pounds. However, they can grow even heavier as the recorded largest Flemish Giant rabbit can weigh up to 22 pounds. While the world’s longest, tallest rabbit measured roughly 4 feet 3 inches.

The Flemish Giant breed is also known as the Gentle Giant because of its serene personality. Despite these large rabbits being huge and giants compared to other breeds, they are relatively calm and sweet animals.

Indeed, gentle giants, as the majority defines them. This breed is also called Universal Rabbit because of its numerous uses. They are bred not just for pets but also for their fur, meat, and display animals. Because of their calm and sweet nature, they are popular as pets.

Well, of course, although they are widely known as soft and sweet rabbits, they have their playful side and sometimes, depending on the rabbit’s personality, can be naughty.

One thing that all rabbits have in common is that they are prey animals. This means they are built to be extra cautious in new settings.

This being said, before cozying up to new owners and new environments, they must determine whether or not anything or someone poses a threat to them. Thus, they can be timid and won’t stay close to humans as much as possible for the time being.

To approach them, slowly move around your animal friend and respect their preferences and space. Keep on doing this, and it will help you build trust. The more you learn about your rabbit, the more they become comfortable and show their personality to you. 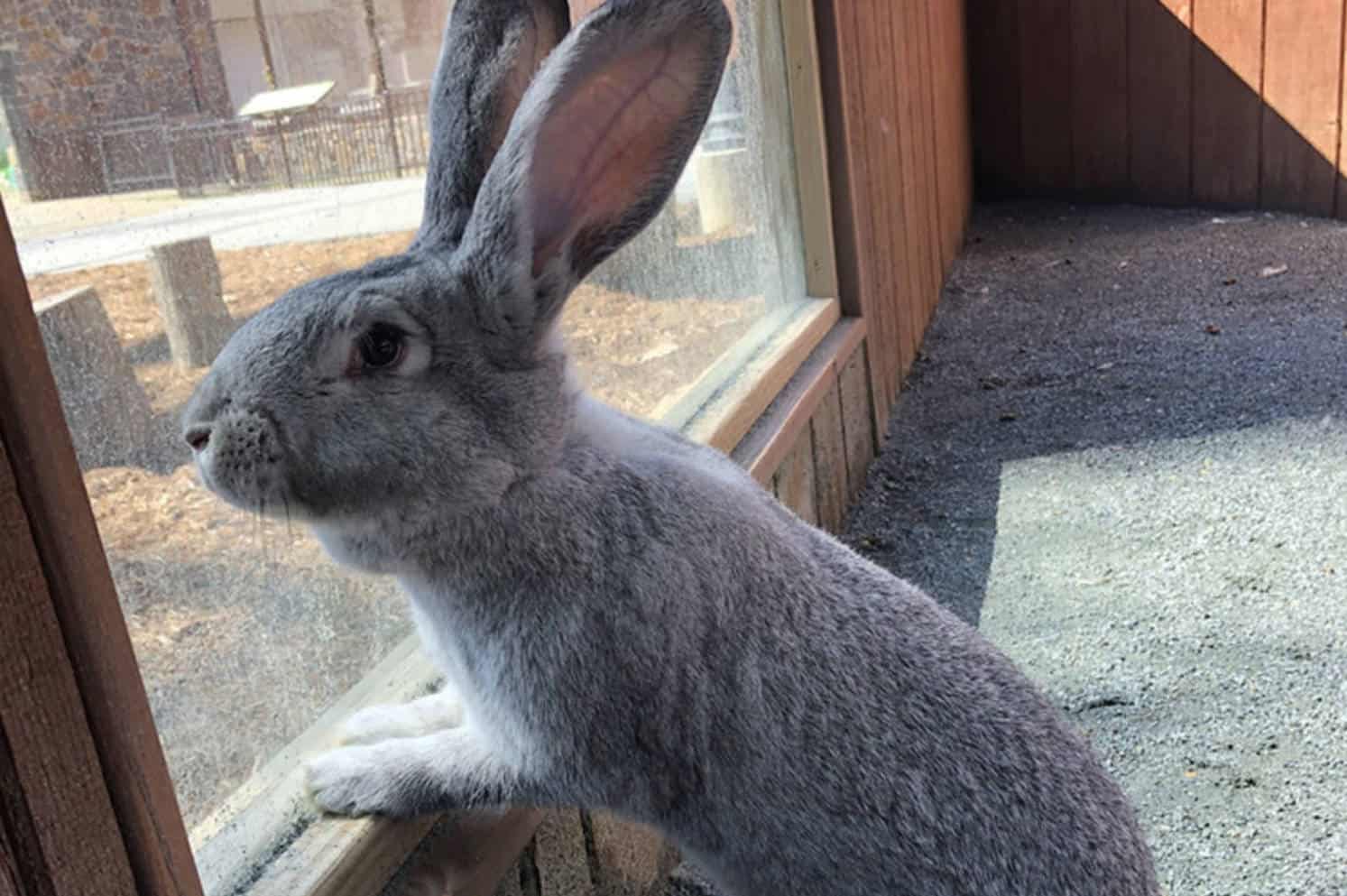 Because of their larger frames, these rabbits are more prone to arthritis and other bone stress illnesses. This includes the way you are handling them.

Ensure that you carry them gently and do not let them fall carelessly as they may have their backs damaged. Like the Giant Flemish Rabbit, Giant rabbits require careful attention to correct nutrition and activity.

Like other rabbit breeds, they have sensitive digestive systems, and they need to follow a proper diet and eat the right things to maintain their good state.

Rabbits need to be amply hydrated but again, not too much. They can get too much water and diarrhea when fed food like vegetables and fruits with too much water content.

Nonetheless, it’s always essential to provide enough filtered water and hay. For variation, it’s also good that you provide them with a daily serving of dark, leafy greens.

One of their advantages as giant rabbits is that it’s okay to give them occasional extra treats. They are less likely to be harmed by treats like a slice of fruit or vegetable than a smaller rabbit. The excess calories are helpful for their larger size. 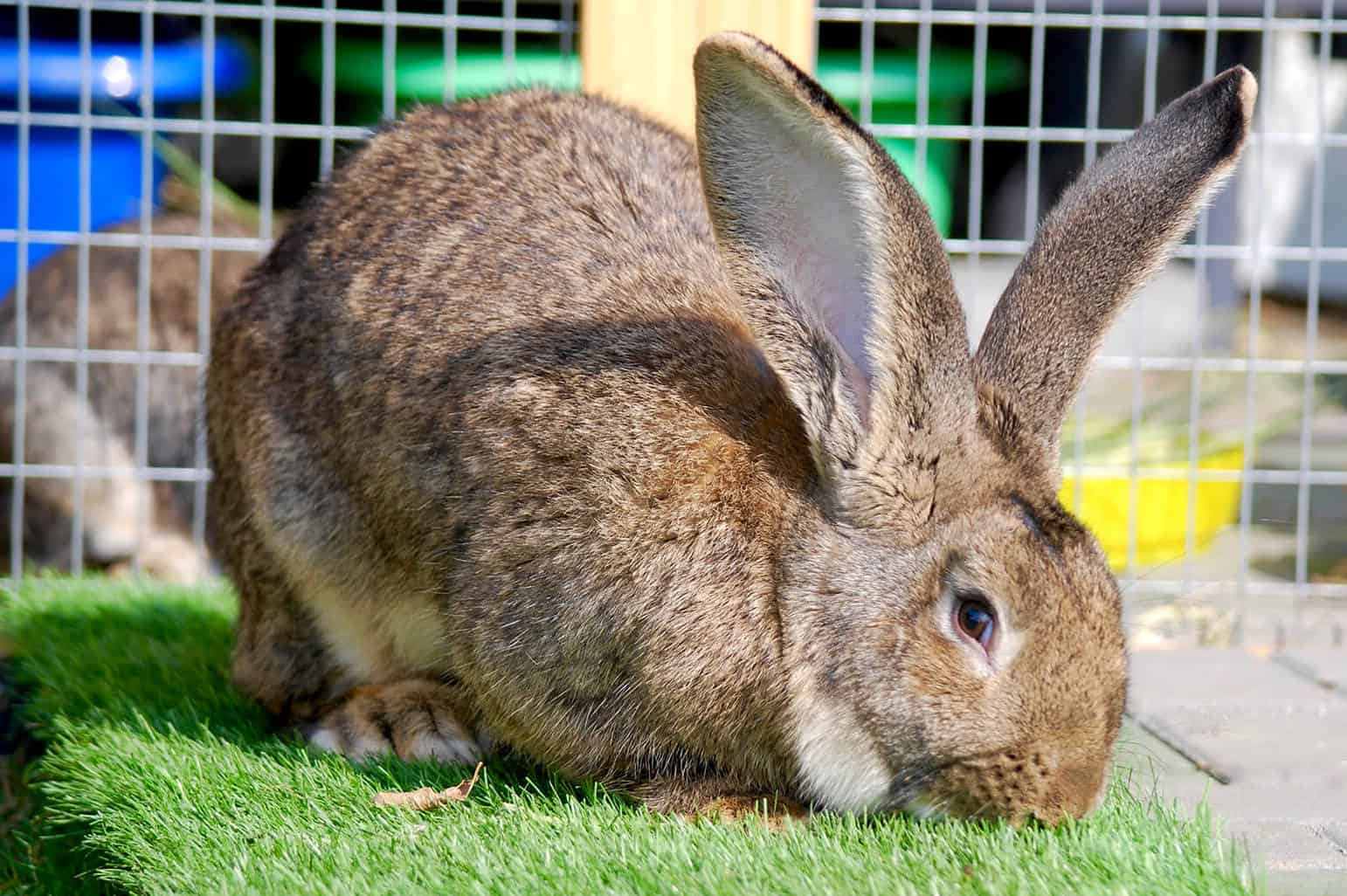 Like all other rabbit breeds, the Flemish Giant should live on a diet consisting primarily of fresh hay and grass. This diet aids in the proper functioning of their digestive system, which is beneficial to their overall health.

If you don’t have any experience, it might help you search the web or ask experts or people who have taken care of rabbits for a long time. As for experts, they usually suggest the following guidelines for your rabbit’s consumption: 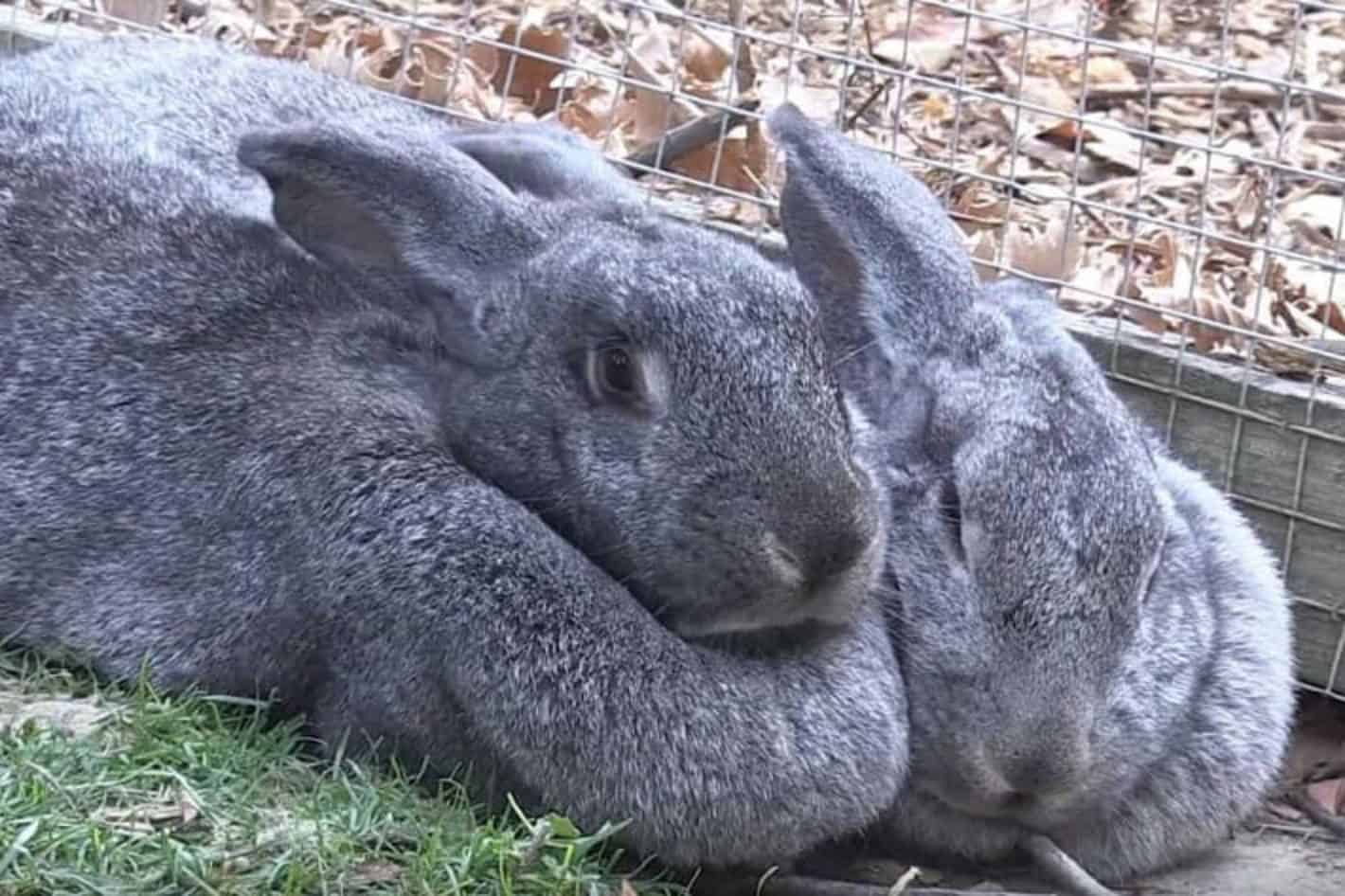 As for diseases, Flemish Giant rabbits are just as susceptible to health issues as other rabbit breeds. Here are some health issues that may be prone to rabbits.

In rabbits, gastrointestinal stasis is a potentially deadly disease. This is a condition where the stomach and intestine, muscular contractions are reduced. Because of this, normal bacteria in the digestive tract get out of balance.

Rabbits suffering from G.I. stasis can show signs of being drowsy. They may show symptoms of pain through grinding their teeth, and their posture can be unusually bent or hunched.

Your rabbit may also start producing a lot of gas, and other excretion may be liquid or solid. They can excrete mushy stool or suffer from diarrhea. Severe forms of G.I. stasis can be lethal if left untreated, so it’s best to see a vet once you observe these symptoms.

A rabbit’s teeth continuously grow, so they need assistance for proper growth. Your rabbit’s teeth will not be able to wear down correctly if they are misaligned.

Malocclusion, also termed buck teeth, is a significant condition if the teeth are misaligned. This can lead to infections in the roots and jaws. Your rabbit can also develop difficulty in eating well and pain. This syndrome can develop as a result of a variety of factors like:

Pets quickly pick up mites like your rabbits from the environment. They may get these from other rabbits or other household pets like dogs. Mite infestation can also be spread through beddings.

Symptoms of mite infestation can vary based on the type of mite responsible for it, but here are some of the obvious indicators of a potentially more significant mite problem. 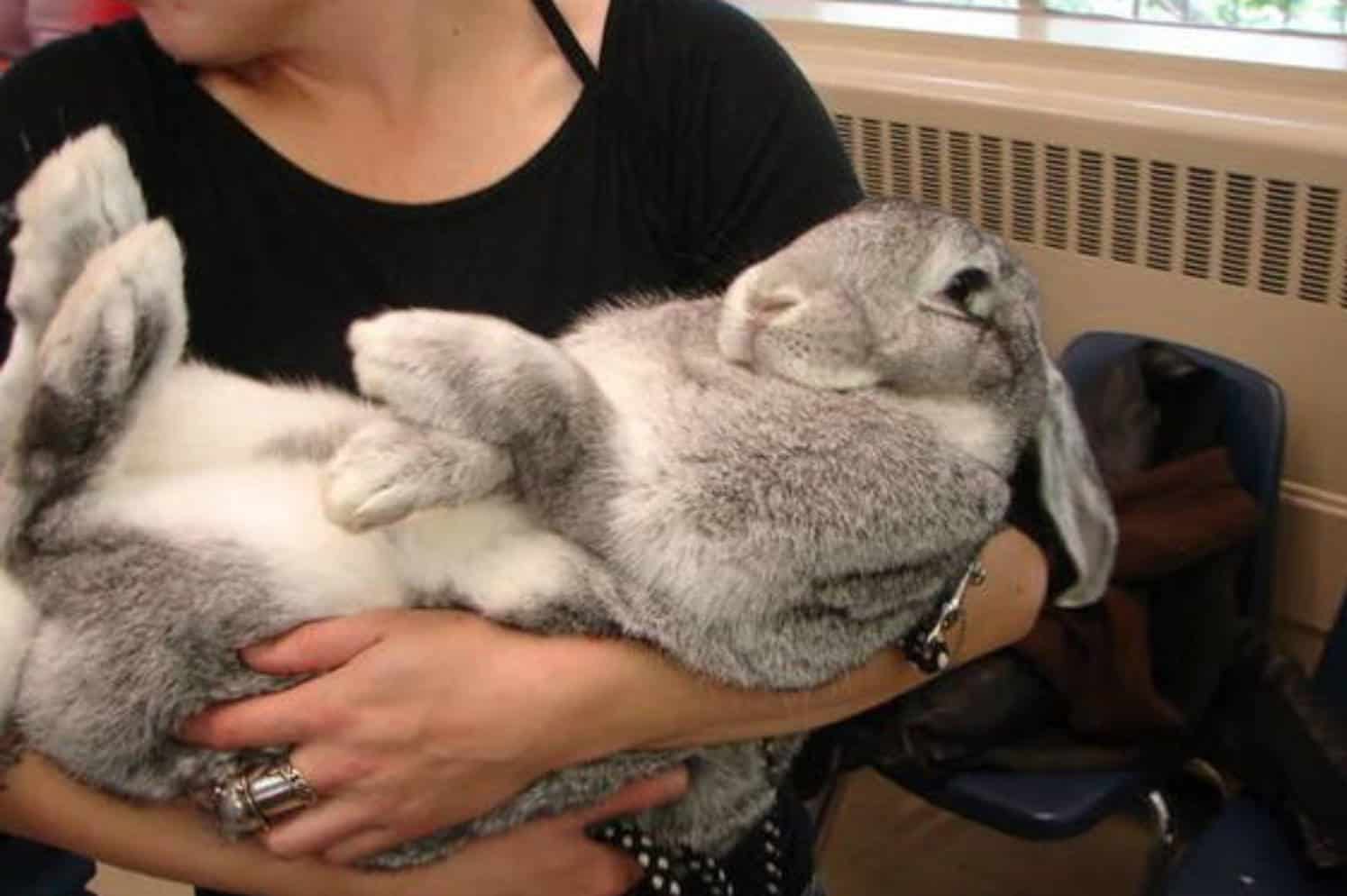 When caring for pets, you need to ensure that you can provide them with food, safety, shelter, grooming, and company.

Rabbits are pretty much watchful of their environments being prey animals, so their home should be safe for them and away from potential threats like wild animals and abusive people.

The Flemish Giant rabbit requires a different type of care from other rabbit breeds also because of their size. In taking care of a giant rabbit, you’ll need to allocate more space, provide more food, and you are subject to cleaning up more than what smaller breeds require.

The Flemish Rabbit’s size makes it more sensitive to heat, and therefore it’s essential to keep them in an atmosphere that isn’t too humid. This place should stay at slightly below 70 degrees Fahrenheit.

If you happen to see your rabbit with red ears, salivation, rapid breathing, drowsiness, resting in a stretched position, and having a convulsion, they may be battling with heat exhaustion or heat stroke.

Your rabbit requires their own space aside from the comfort of your home. So, it would be nice to set them up with their crib with all their needs available within the area.

It’s paramount that they lie down, move freely, and reach what they want without difficulty. This way, they would feel that they are at home and have a place to feel comfortable. You can include their toys and litter box among the things in their house.

The coat of a Flemish Giant rabbit is short and regular, probably just like most rabbits out there. You would need to brush your rabbit’s fur once a week and in some seasons, even more like during shedding season.

Their nails must also be trimmed regularly as long nails can pose risks to your rabbit, yourself, and the people inside your home.

Getting a Flemish Giant rabbit is a commitment, and you need to be hands-on in taking care of your rabbit. This way, you make sure that they grow correctly without suffering the pain of diseases because of neglective owners.

Getting to know your rabbit’s breed is paramount in making the best of your pet parenting life.