Have you heard about the Polish Rabbit? It’s a miniature rabbit breed that makes a great family companion. It loves being cuddled and may seek you out to pet or carry it. Do you think this little bunny could be a good fit for you? Read on and discover in this article. 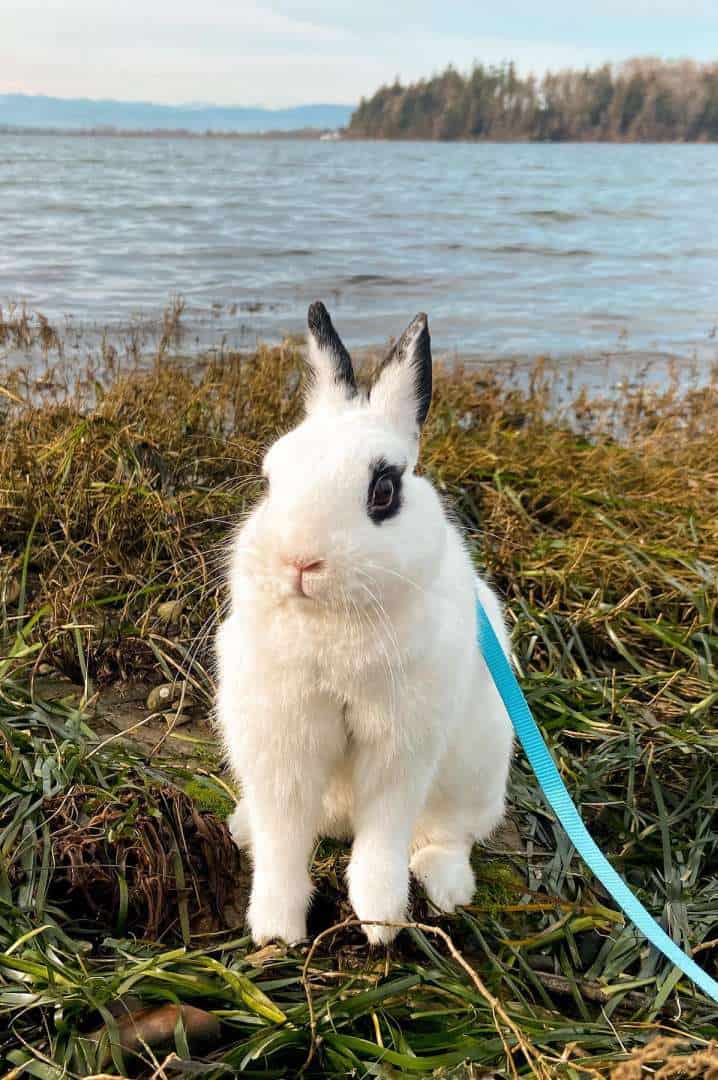 The exact origin of the Polish Rabbit is shrouded in mystery. Its name is misleading in and of itself!

Some believe this fluffy bunny may have originated in the United Kingdom, not Poland. They think it’s given the name Polish because of its fur’s ‘polished shine.’

The earliest mention of Polish Rabbit was in the 1800s in England.  A few breeders began dubbing their tiny white bunnies ‘Polish’. Many believe their descendants include Dutch, Himalayan, and Silver rabbit breeds.

Contrarily, some believe the Polish rabbit originated in Belgium and only exhibited in England around 1884. Many people thought it was crossed in the 1860s between Himalayan and Dutch breeds.

Polish rabbits were only available in white and typically with red eyes in the late 1800s in England. Breeders have even mocked them for their weakness due to their small stature and friendly nature.

Despite these views, they remained a popular choice for house pets due to their pleasant personalities.

The Polish rabbit was produced originally for meat production. It was significantly more massive than the modern variant and was a delicacy.

The Polish breed was one of Europe’s most popular types in the 1900s, particularly in Belgium. It arrived in the United States in 1912 as part of the vast European immigrant surges in the 1900s. The American Rabbit Breeders Association (ARBA) officially recognized it in 1938.

The Polish bunnies rapidly established themselves as a strong competitor in rabbit displays. These frail creatures were not only easy to propagate but to train as well.

From 1925 onwards, American breeders began crossing the Polish breed with other tiny rabbits.  This resulted in the wide variety of colors we see today.

American breeders also developed Polish rabbits to be rounder and more packed. Thus, they diverged from their ancestors.

Polish rabbits from Britain were reintroduced to the U.S. in the 1970s. ARBA had to classify them as a separate rabbit breed. So, they were called Britannia Petite. Yet, they retained their first known name in the United Kingdom.

Ironically, Polish rabbits do not have the “dwarf gene.” Nowadays, they are adored as pets because of their cute sizes.  They’re also very popular as exhibition rabbits. 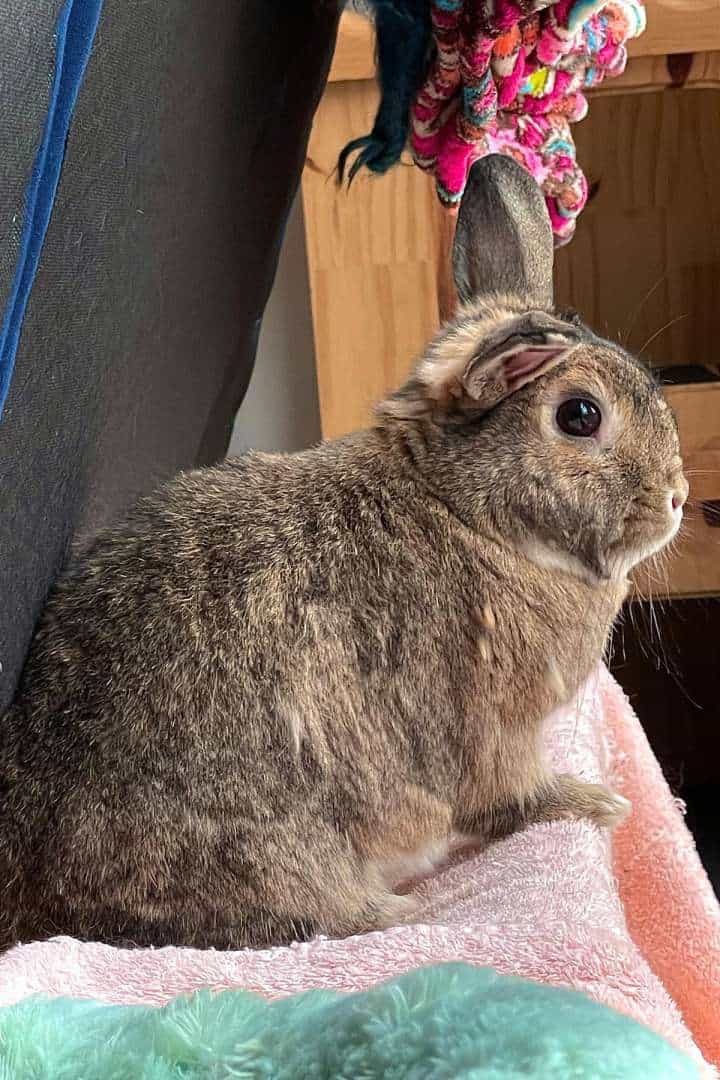 Polish rabbits should give an overall regal look. Hence, they are called “Little Aristocrats.” One key factor in judging their quality is their head placement.

The Polish breed in the United States has been bred to have a more compact form. But its counterpart in the United Kingdom has remained thin and hare-like.

Thus, it is hard to establish a single breed standard for the Polish. ARBA and Britain’s council have their own, respectively.

Polish rabbits look tiny and weigh between 2.5 and 3.5 pounds. They sport a short head, plump cheeks, and wide eyes. They are round and compact. They also have short, pointed ears that stand erect on top of their heads.

The Polish flyback fur is short and silky. It will fall back in place if you stroke it the other way. It doesn’t require a lot of grooming. Its fur is simple to care for.

Polish bunnies were usually white with blue or red eyes until the 1950s. The red-eyed variant is a legit albino. The blue-eyed type carries the Vienna white trait, which mimics albinism.

ARBA approved the chocolate and black Polish in 1957. The blue variant followed in 1982 and the broken type in 1998.

Polish rabbits can live between 5 and 6 years. But they can live longer if well cared for.

You can also increase their life expectancy to roughly ten years by neutering or spaying them early in infancy. These are surgeries performed to give your pets a healthier and longer life. 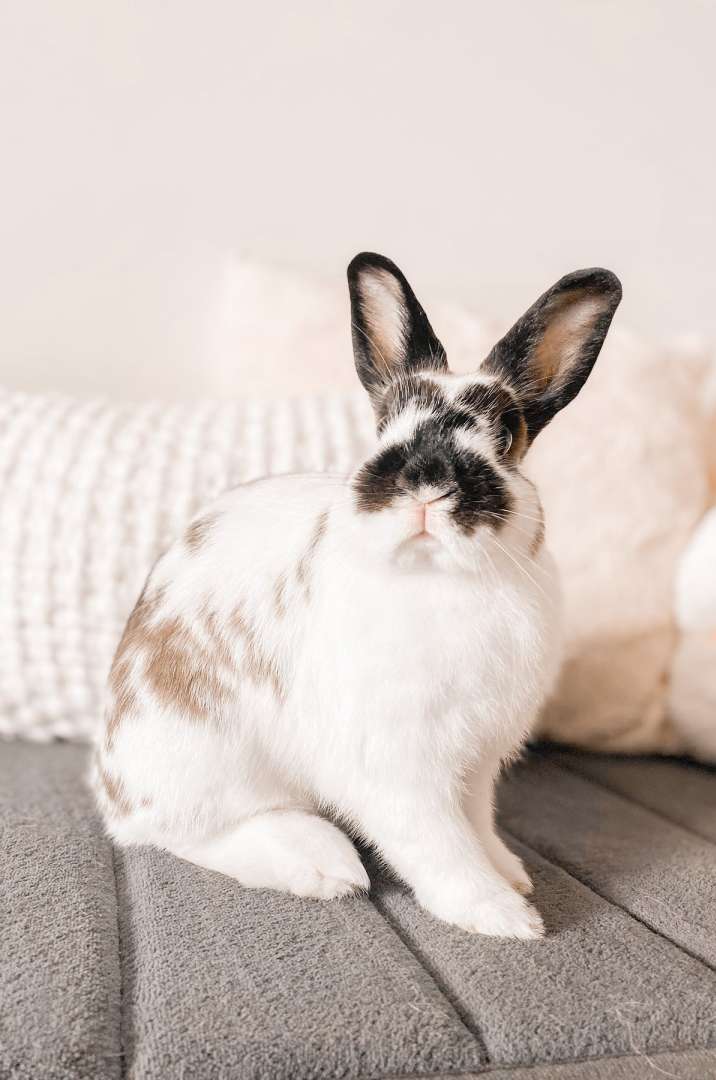 Polish rabbits have a great temperament, making them excellent pets to have at home. They’re not only cute but also calm and friendly around people.

These rabbits will seek your attention and enjoy being scooped up, handled, and petted. They’ll also love being active and having fun with toys, especially when you’re around.

Nevertheless, they will not tolerate confinement in a cage for lengthy periods. Always respect their personal space. They may try to bite if they’re anxious or frightened.

Despite their superb temperament, the Polish breed is not for little kids. The tinier the bunny, it’s easier for children to drop and harm them.

Singles, elders, couples, and families with youngsters old enough to appreciate how sensitive rabbits are will enjoy their mild, friendly temperament.

These rabbits are easier to train than bigger ones. So, magicians frequently use them in their shows.

Teaching your Polish bunny tricks may not be your top concern. But, you should train them on how to come, stay, and litter. With patience, time, and rewards, it is feasible. 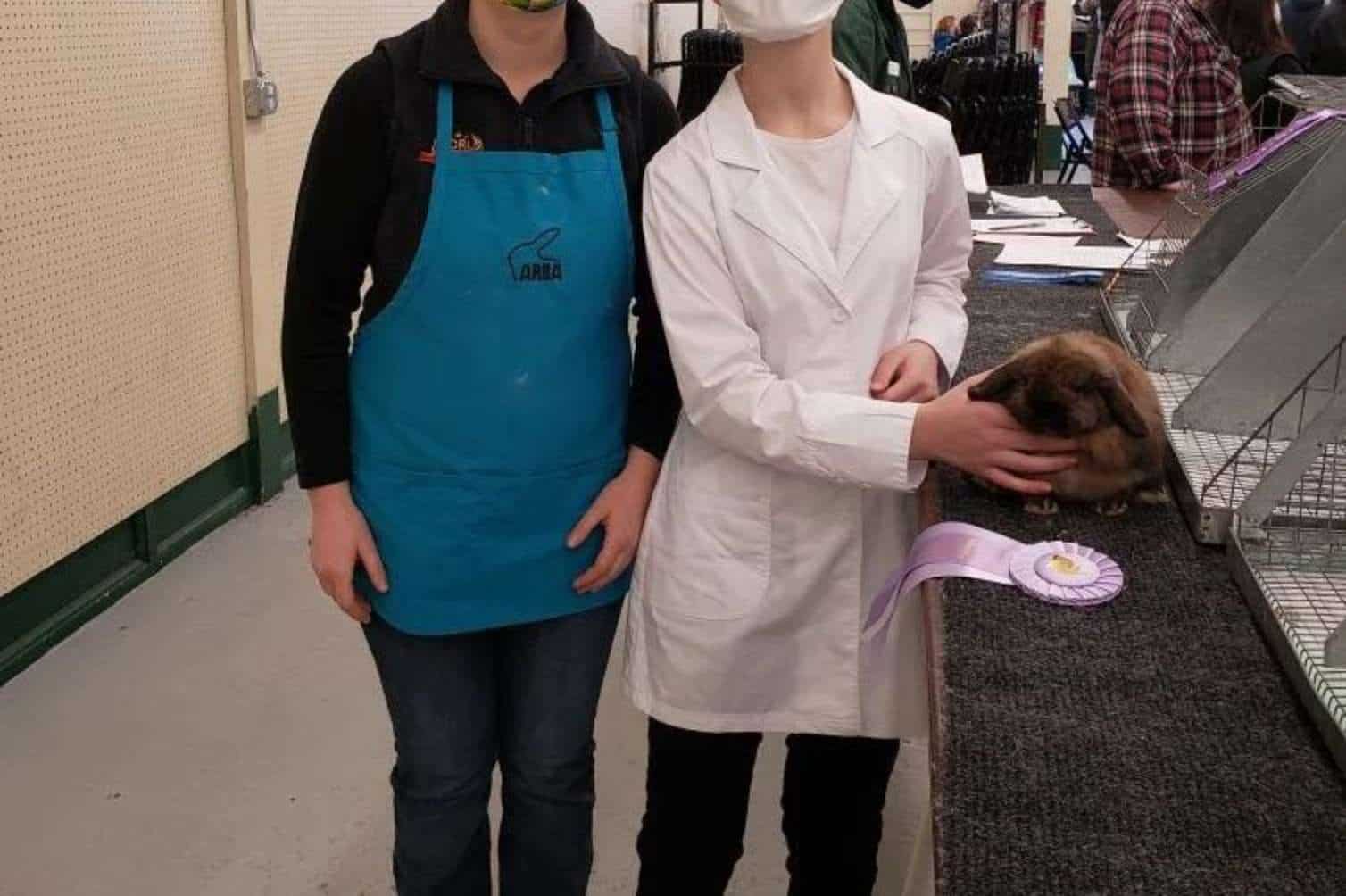 The Polish rabbit does not have breed-specific health issues. But they are susceptible to the same illnesses as other rabbits. Learn some of these concerns below.

Malocclusion happens when the lower and upper teeth are misaligned. The regular chewing process does not wear down the teeth of your rabbit.

Take your rabbit for dental checkups. Ensure that your pet gets enough hay as well.

This illness is also known as GI Stasis. It’s a potentially fatal condition where the digestion slows down or halts completely.

Symptoms are lack of appetite, tiny or no feces, and drowsiness. It can be cured if found early enough.

These are frequent parasites seen in pet rabbits. You may notice them tossing their heads often if your rabbits are afflicted. You might also find skin scales on their inner ears.

Ear mites are usually not a grave problem. But if untreated, the sores might become infected, causing head tilt and loss of hearing. Check with your veterinarian to treat this condition.

Flystrike occurs when flies leave their eggs over filthy portions of fur. The eggs hatch and begin to devour the bunny inside out.

Indications include listlessness, seizures, and skin issues. Keep your pet rabbit’s rear side clean at all times, especially as it becomes older.

Tumors or abscesses typical in the head can cause swellings. They usually form within weeks.

However, you may not detect them until they have grown to a particular size. If you notice any weird bumps or lumps or bumps on your pet, call your veterinarian right away.

Bacterial infections of the ear, as well as brain infections, are common causes of head tilt. Another prevalent cause is Encephalitozoon cuniculi, a parasite. This is a major cause of sickness and can be transmitted to people.

When a rabbit has E. cuniculi, it excretes infectious spores. Consuming these spores in contaminated water or food transmits the disease to another bunny.

If your rabbit is afflicted, it may find it challenging to get up. Its head may continue to revolve in one direction.

Keep your pet rabbit as calm as possible with dim illumination to prevent self-injury.

Biting insects, such as mosquitos and fleas, carry the myxoma virus. When it first arrived in the U.K. in 1953, it wiped out 99% of the rabbit population. It can be deadly since it produces slow swelling of the ears, eyes, and genitals.

Always have your bunny vaccinated to avoid infection. However, if you notice any of the symptoms listed above, you should contact a veterinarian right away.

Nerve damage, fracture, or dislocation can all cause one-leg paralysis. A spinal or back injury can likely cause paralysis of the hind legs.

Rabbits are prone to these kinds of injuries. If your rabbit appears paralyzed, take your pet to the vet at once.

Contact your veterinarian if you observe a discharge out of your bunny’s nose and eyes, noisy, open-mouthed, or fast breathing. These symptoms could indicate heat stress or a respiratory infection.

If it’s after hours, take your pet to the nearest emergency vet clinic right away. 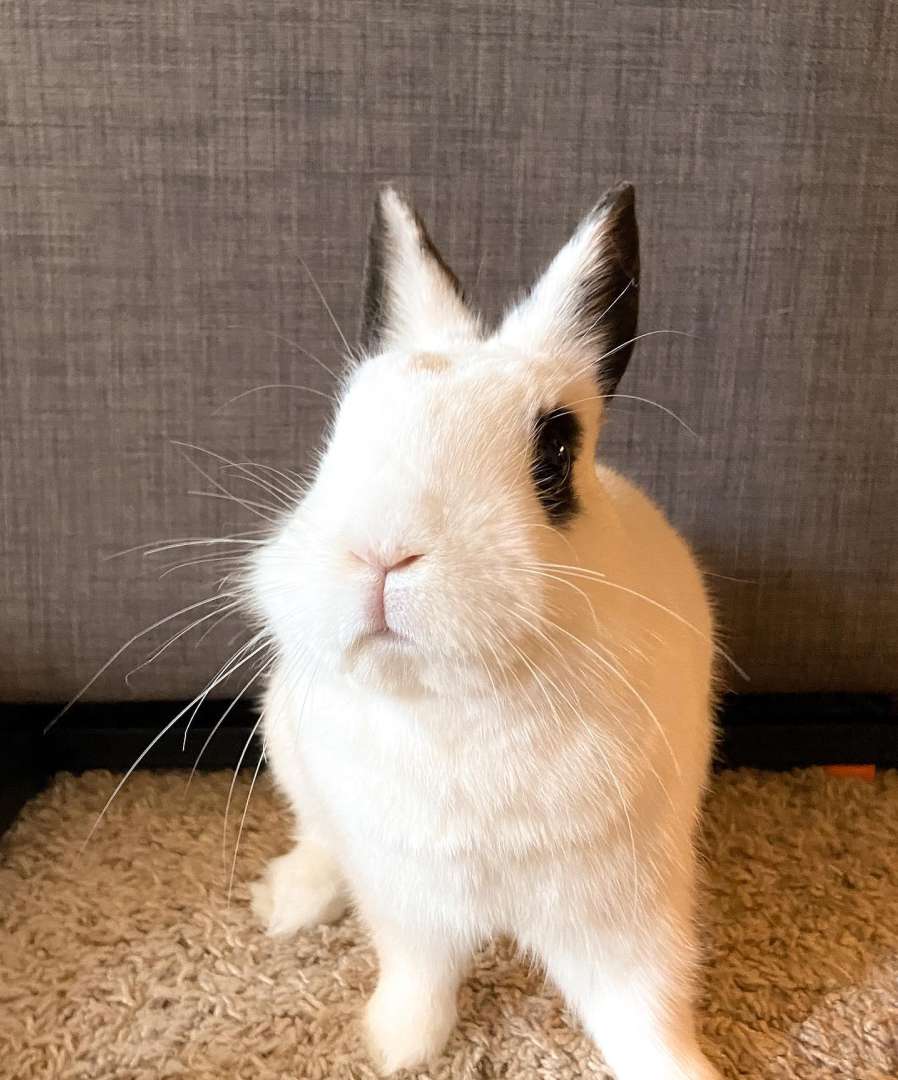 You’ve already learned everything there is to know about the Polish rabbit’s characteristics. It’s time to see what it’s like to live with one. Discover their living, feeding, grooming requirements, and more.

It is relatively simple to care for a Polish bunny. This breed only requires enough enclosure to stretch out due to its small size. They’re ideal pets for apartment residents.

Polish rabbits, like other small-breed bunnies, are gentler than the larger ones. This attribute makes them best suited to a rabbit-loving household.

Maintain your Polish bunny as a domestic rabbit because of its miniature size. If it’s kept outside, its size makes it more vulnerable to predators.

This does not prevent you from allowing it to go outside. Ensure that it has a secure cage. Keep an eye on it. It’s always a good idea to bring your Polish inside at night.

Construct your indoor enclosure out of wires. Make sure it has a plastic or metal bottom covered with comfortable bedding.  Spot-clean the bedding daily and replace it weekly.

The amount of food your Polish bunny should eat is determined by its age, size, and activity. Due to its smaller size, it will not eat as much as other rabbits.

Give your pet about 1/4 cup of rabbit pellets if it weighs 5 pounds per day. If it’s under 8 months, feed it with limitless alfalfa pellets. Your pet should also have access to fresh water at all times.

Supplements might include fresh greens, fruits, vegetables, hay, and grains. Limit intake of high-sugar fruits, and avoid iceberg lettuce. It has lots of water and less fiber. It cannot be considered a complete meal.

Supply and replace Timothy hay regularly. Alfalfa hay is high in calcium. Don’t give it to rabbits past the age of 8 months.

Do not feed your bunny with yard clippings. They may have been treated with dangerous chemicals.

The teeth of a Polish rabbit will continue to develop and can sometimes grow to excessive lengths. This condition can cause considerable pain since it pierces the gums and mouth. You must ensure that your rabbit’s teeth do not overgrow.

You can naturally file down the bunny’s teeth as it chews by giving more hay. You can also use bits of wood or other items to file its teeth. Keep an eye on your bunny’s dental health to avoid future dental expenditures.

Regardless of the color of your rabbit, groom it regularly. Brush its fur to maintain it clean, lustrous, and pest-free. Groom your bunny at least twice a week with a tiny brush. Bathe it only when necessary.

During molting, you should groom your pet more frequently. This will avoid wool blocks and keep your bunny from eating its fur.

Rabbits run about three miles every day in the open. So, you should provide your pet rabbit with daily, adequate exercise to keep it active and engaged.

Your pet should get not less than 3 hours to range each day. Do it outside in the garden or around your home. It will take care of its exercise if you provide enough enclosure.

Many pet lovers consider the Polish rabbit to be a fantastic pet. It’s a good choice for first-timers due to its amazing temperament. It also doesn’t have a lot of maintenance requirements. It doesn’t take up a lot of room either. So, are you interested in getting a Polish rabbit now?