Having rabbits in their best condition is the primary goal of many rabbit owners. This article will tell you all about rabbit E. cuniculi and its symptoms, causes, treatment, recovery, cost, and prevention.

What is Rabbit E. Cuniculi? 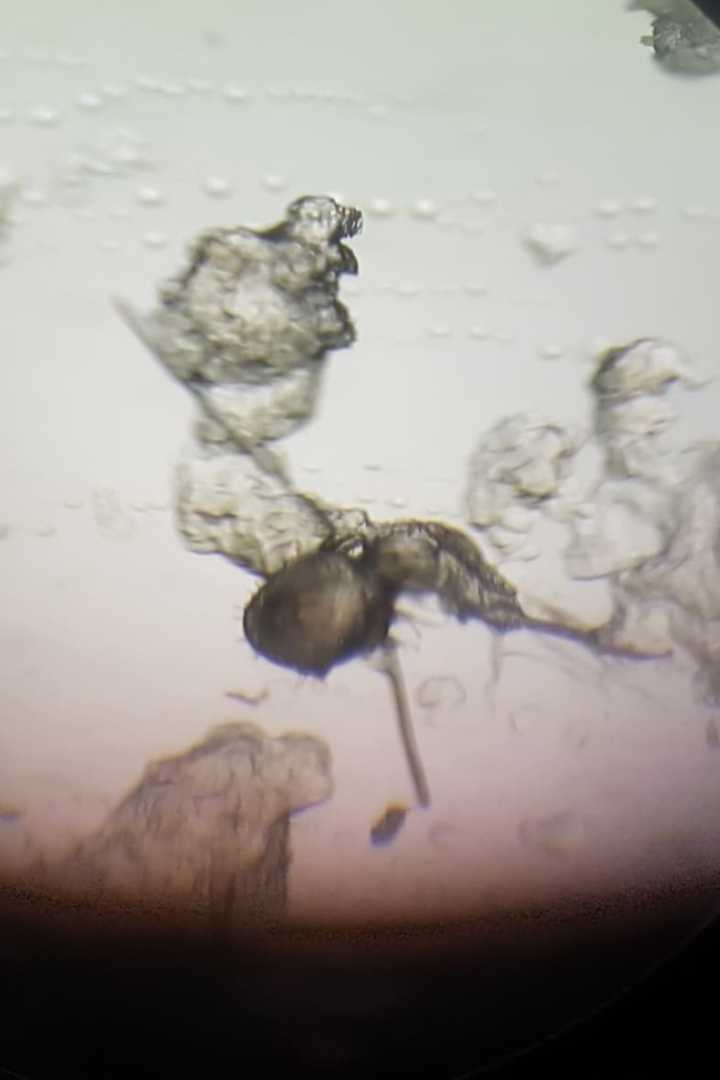 Encephalitozoon cuniculi or E. cuniculi is a microbial parasite that affects the mammalian population, including rabbits and humans. It attacks and infects internal organs such as the liver, kidney, and brain, resulting in neurological problems and organ failure.

The virus has been first discovered in rabbits. Still, other mammals such as dogs and immunocompromised humans have shown antibodies towards the parasite, which means that most mammals have encountered E. cuniculi.

Not a lot is known about the parasite and its ways of being infected. Around 50-70 percent of rabbits in America have shown that they have been infected by E. cuniculi, although most do not offer any symptoms.

It can be a bit tricky to track down the disease. Most of the time, the diagnosis is made through blood tests and present antibodies, which means that symptoms and effects can vary significantly from rabbits to rabbits. 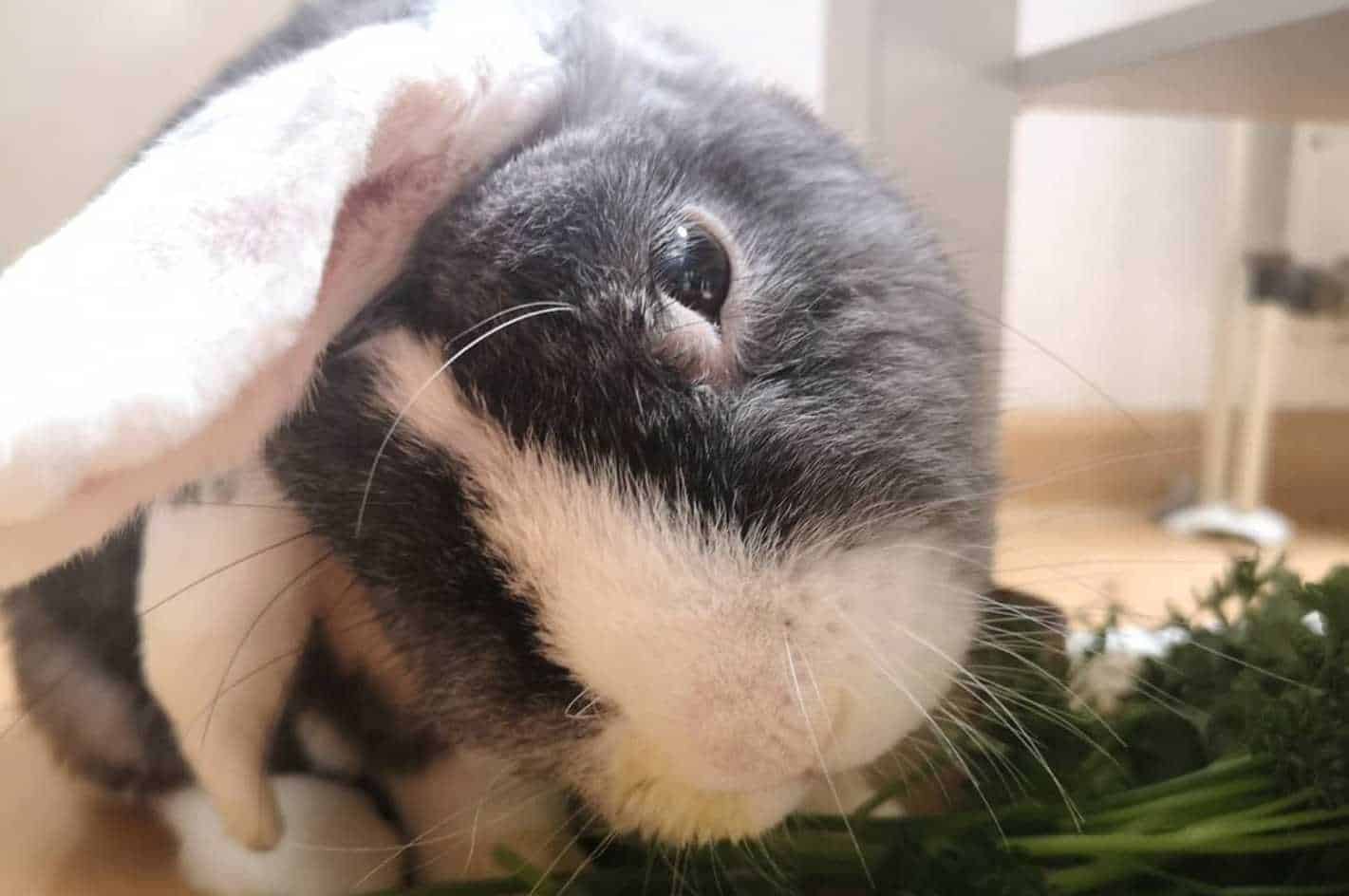 As E. cuniculi attack different organs, it can have debilitating and drastic symptoms. Most of the time, it can be shown with neurological effects.

Stiff and weak knees, also known as Floppy Bunny Syndrome, are recurring symptoms in severe cases of E. cuniculi infection. Most of the time, it’s a symptom of the rabbit’s near-death due to respiratory problems.

Head tilt or torticollis is another neurological symptom of E. cuniculi. The rabbit uncontrollably tilts one die of its head lower than the other.

The rabbit can suffer from seizures and other neurological problems when triggered by the parasite. Rabbits also suffer uncontrollable ticks and tremors from the episode.

Uncontrollable Urine secretion or urine incontinence is the lack of control with the bladder. The parasite affects the organs such as the kidney and the liver leading to the total lack of power in the urinal function.

When the parasite attacks the kidney, it can lead to kidney failure. Kidneys are essential to other bodily functions, so any obstruction and damage can be lethal to the rabbit.

As the nerves can be severely damaged, cataracts are other symptoms when the parasite has already reached the brain. The eye’s nerve is attacked and damaged by the E. cuniculi resulting in cataracts and can continue towards blindness.

If the rabbit shows any or multiple symptoms, immediately bring it to the vet. 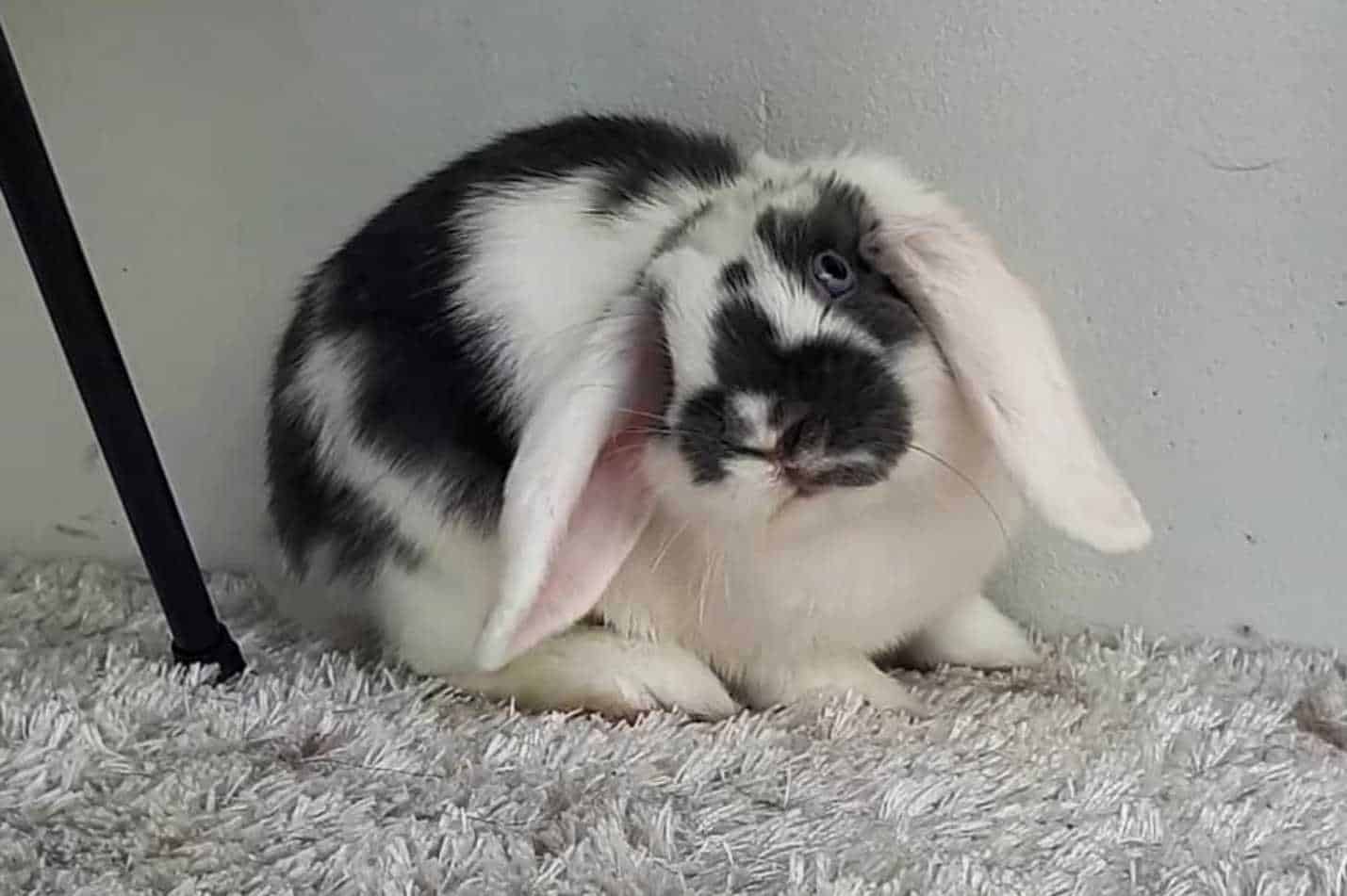 There are two significant causes of E. cuniculi in rabbits: pregnancy and exposure to infected animals’ secretion. Transfer through pregnancy does not mean that the kit will come out of the womb with the adverse effects of the parasite.

Most of the time, rabbits infected through pregnancy will not show any signs and can live a full life. Antibodies from the nursing mother can also help with fighting off the disease.

Secretions by infected animals such as urine, feces, and respiratory fluids can transfer and cause E. cuniculi. Contamination through drinking water is the most common way of direct transfer between rabbits.

Most of the time, the parasite will come from wild rabbits. As they don’t have an extensive care system, the spread of E. cuniculi in the wild population can be rapid.

With domestic rabbits, asymptomatic rabbits can transfer the virus to others. It’s essential to check a new pet rabbit with the vet to ensure that they do not have any parasites or viruses that can be transferred to others.

Asymptomatic carriers can also be the source of the parasite. Some rabbits can carry the virus without showing any symptoms. Although the parasite does not have any adverse to the infected rabbit, it can still affect other rabbits.

Rabbits are not the only animal that can bring the E. cuniculi. Other domestic pets such as dogs and cats, even humans, can have the parasite even without any adverse and outward symptoms.

How to Diagnose Rabbit E. Cuniculi? 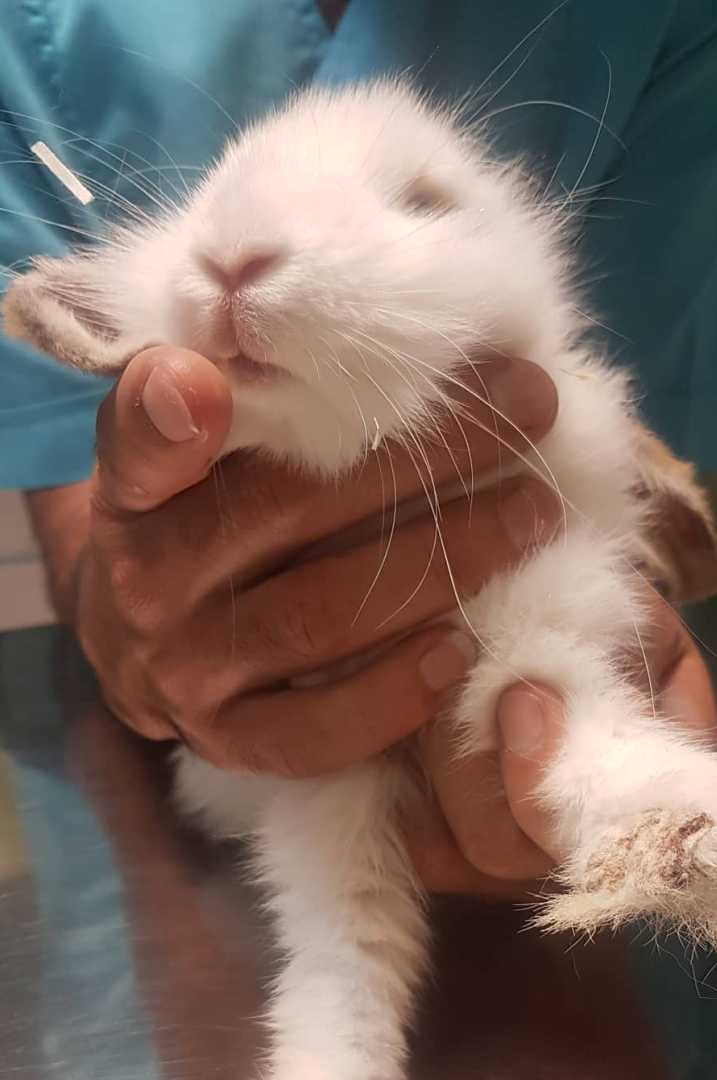 However, a present antibody is not a sure way to diagnose the parasite, especially if the rabbit does not show accompanying symptoms and signs.

It can just mean that the rabbit has encountered E. cuniculi in the past and developed the antibody for it. When the number of the antibody is high, it increases the possibility that E. cuniculi are currently infecting the rabbit.

Other than blood testing, clinical symptoms such as those listed above are also considered. 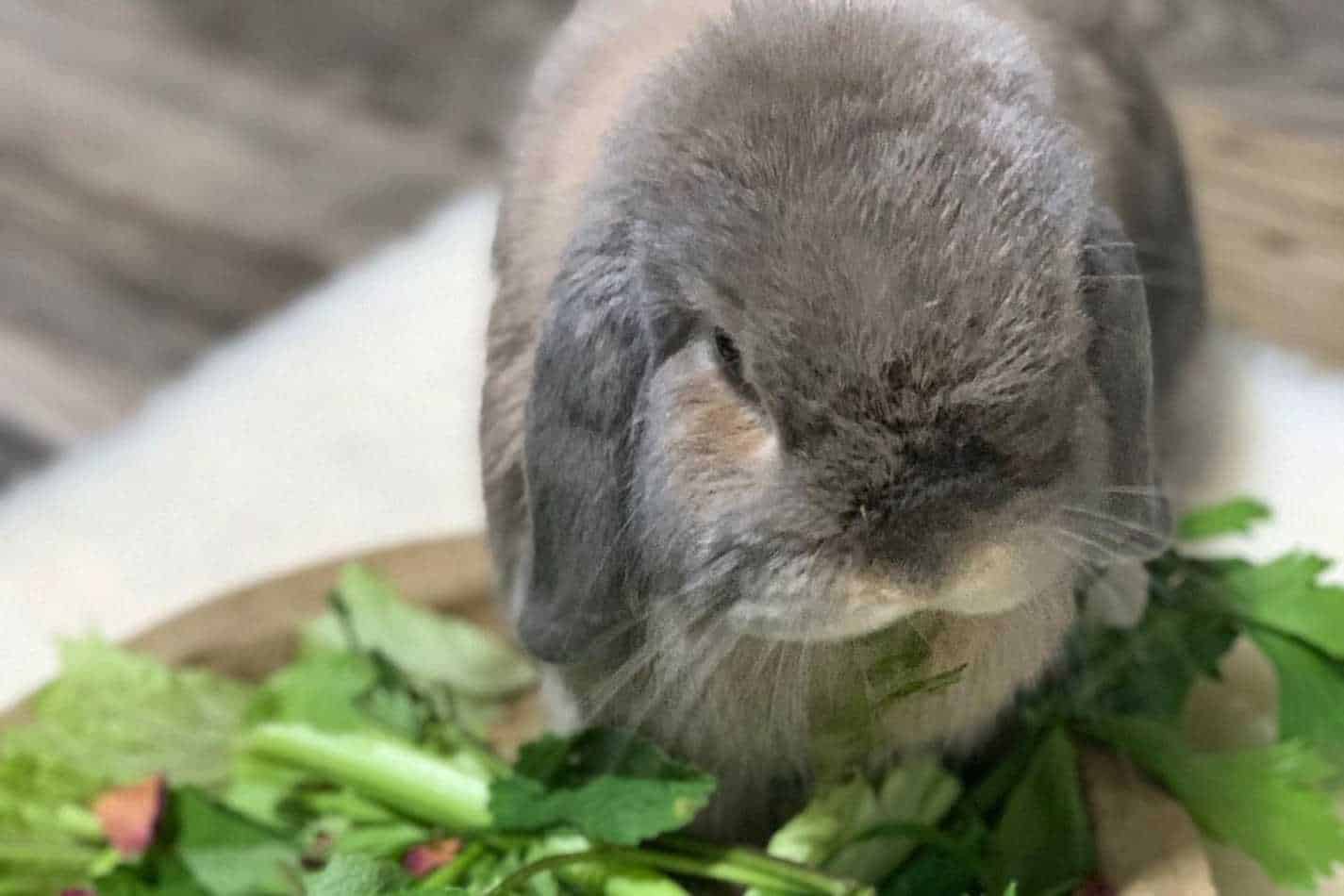 When treating parasites and other infections, doing so as soon as possible is vital to increase the chance of survival. Here are the treatments offered by vets to treat E. cuniculi.

cuniculi is a tricky parasite to treat, so there is no straight-to-the-point treatment. Rabbits will be given anti-parasitic medication such as fenbendazole as the first step in treatment.

The vet will often have a more challenging time treating the accompanying symptoms than removing the parasite.

The parasite also attacks and weakens the rabbit’s immune system. This can result in an infection, so the anti-parasitic medication is usually supplemented by antibiotics.

Direct feeding might be needed when the rabbit loses appetite and becomes lethargic. The treatment is very crucial to the rabbit’s survival. Not having the right amount of food and water can result in gut stasis and dehydration.

Providing them with the proper nutrition can also increase their chances of surviving the symptoms and effects of the parasite.

With very severe cases, most owners are given the option to let their rabbit be put to sleep. Severe cases of E. cuniculi can cause the rabbit a lot of pain and suffering.

Their organ will start to fail and be dysfunctional until they are dead. By putting the rabbit to sleep, they limit the pain for their beloved pet. 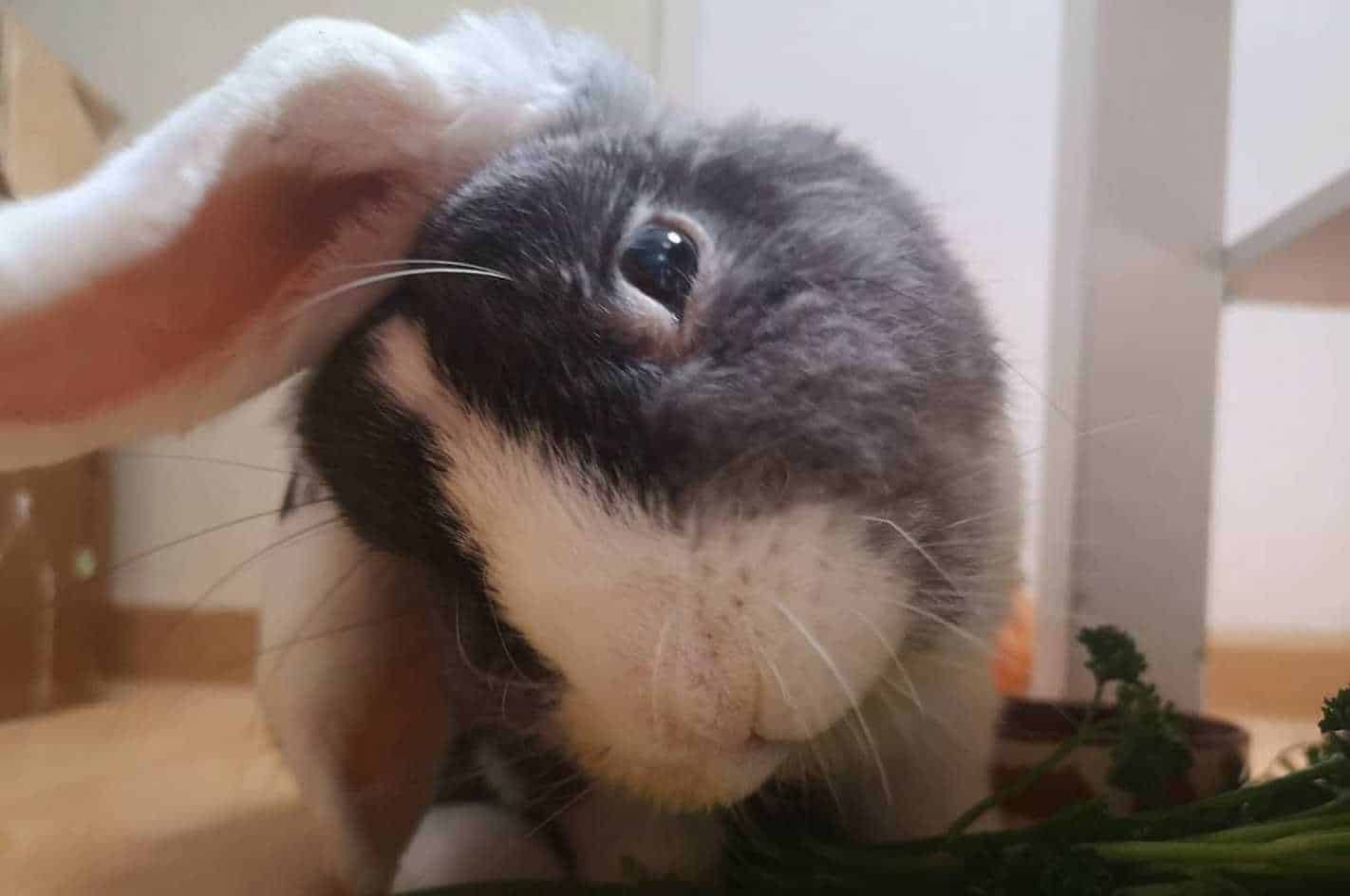 Recovery from severe cases of E. cuniculi can happen. Some of them can live up to many years after their treatment. A gradual and effective treatment can be done with neurological effects such as head tilt or torticollis.

Effects such as blindness or cataracts are much harder to treat in recovery. The rabbit will need a lifetime of support when they lose their eyesight.

Other minor effects such as fever and lethargy can be supplemented by supportive medical care. The rabbit can recover from one to two weeks and return to its routine.

Treating E. cuniculi can be a lot of money, especially if the rabbit needs extensive medical care. The treatment mainly deals with the symptoms and not remove the parasite itself. It can range from a few hundred dollars to thousands.

Some company offers rabbit insurance. To ensure your rabbit’s overall health, you can get one and pay it monthly.

cuniculi is very unpredictable and hard to combat. As the saying goes, prevention is better than cure. Here are things you can do to decrease the chances of rabbit E. cuniculi.

As E. cuniculi is an invasive and infectious parasite, regularly disinfecting the rabbit’s cleaning bowl, cage, and bedding is an excellent way to keep them from contracting the disease. A clean habitat also limits the number of viruses and other diseases.

Providing your pets with regular veterinarian check-ups is a great way to keep them off from diseases. With parasites and viruses, getting treatment as soon as possible will increase the chances of survival. Checking your rabbit’s health is good to keep them in the tip-top shape possible.

Isolate New Rabbits and Other Pets

cuniculi doesn’t just occur in rabbits. Other mammalian pets such as dogs and cats can have them too. If you have a new rabbit or other domesticated pet, it’s better to keep them isolated from others until you have them checked by the vet.

This will limit the cross-contamination between the animals with possible diseases. Some pets can show no signs of virus and infection if they are asymptomatic, so having resulted from a veterinarian that they are entirely healthy is an excellent way to make sure.

Parasites such as E. cuniculi can be deadly and damaging to pets. It’s best to consult the vet as soon as possible if the rabbit shows any symptoms. We hope this guide help maintain the health and wellness of rabbits.