Rabbits have several breeds, and one of the most underrated and rarest rabbit breeds is the Himalayan rabbit. Let us check this breed and see if the Himalayan rabbits are the best pet for you and your family. Here’s Himalayan Rabbit: History, Temperament, Health Issues, and Treatment. 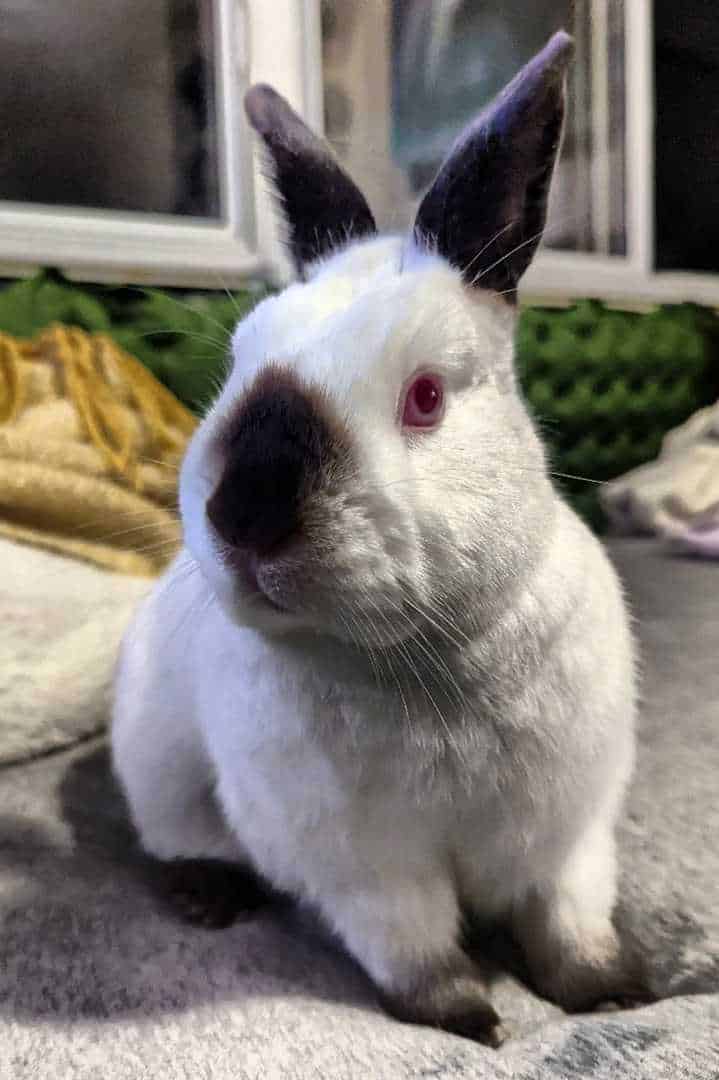 To give you an overview of the Himalayan rabbit breed, check the chart below.

Himalayan Rabbit: History, where did they come from? 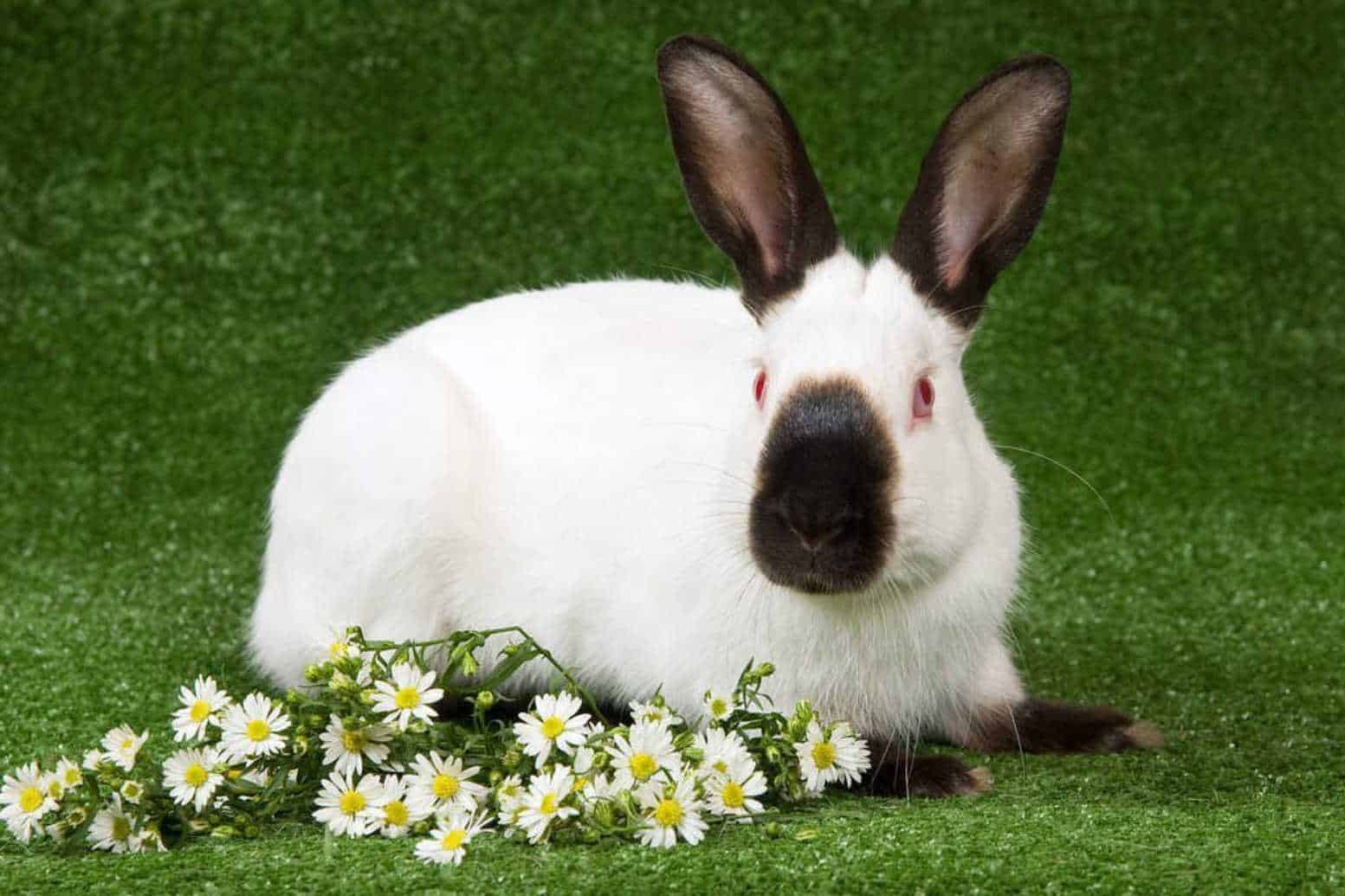 According to some studies, the Himalayan rabbit breed is one of the oldest rabbit breeds recognized by the American Rabbit Breeders Association. Because these rabbits have existed for centuries, the association can barely trace where they originally came from.

However, most people believe that the Himalayan rabbits came from China, Japan, and other countries in Far East Asia, and not from the Himalayan mountain stretch that runs to quite a few countries including China, India, Nepal, Pakistan, and Bhutan.

Because of its unknown origin, the Himalayan rabbit breed gets numerous names depending on the country where they are located. This earned them the following nicknames:

Regardless of what the Himalayan rabbits are called, this breed first arrived in the United States in the 1900s. It was then registered to ARBA (American Rabbit Breeder Association) and was recognized immediately. 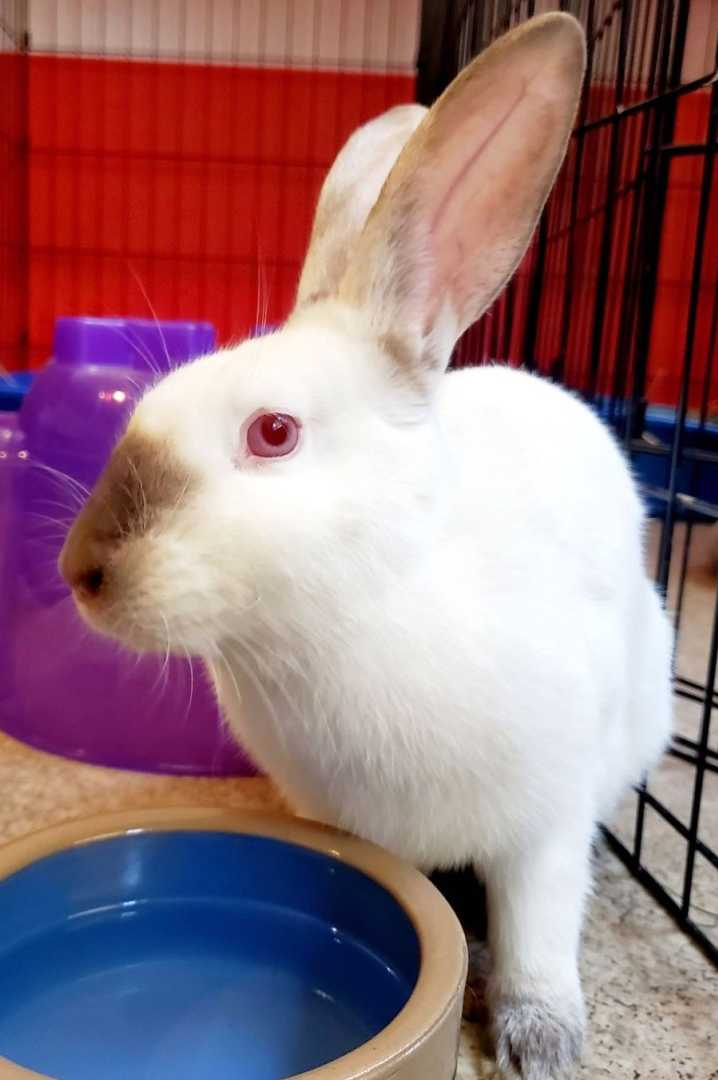 Himalayan rabbit breed has distinct characteristics. However, they get easily mistaken as California White. Let’s get to know them more and see what they really look like.

The Himalayan rabbits are small breed rabbits. Its body looks like a long cylinder when viewed from the top. Their shoulders directly run straight to their hind legs, which gives an optical illusion that their shape is cylinder.

The Himalayan rabbits can grow their height up to 3.5 inches. Though they are small, these rabbits can weigh up to 5 lbs.

On the other hand, the Himalayan rabbits’ fur looks like a Siamese cat’s. Their silky fur can grow to half an inch or shorter regardless of its color, and like most rabbits, their beautiful fur is easy to maintain.

However, you must watch this breed every spring and sometimes during summer, as the Himalayan rabbit breed sheds frequently.

The Himalayan rabbits are known for their silky short white furs.

Pure Himalayan rabbits are entirely white with specific markings in their fur. The markings are usually black and may be visible in their nose, ears, or other body parts, like feet. Some markings may also show as their boots.

Today, the Himalayan rabbit comes in various colors you can choose from. Among these colors include black, chocolate, lilac, and blue.

The Himalayan rabbits can live up to 10 years. But with proper care, routine grooming, and proper nutrition, you can surely add a few more years to your pet rabbits’ life. 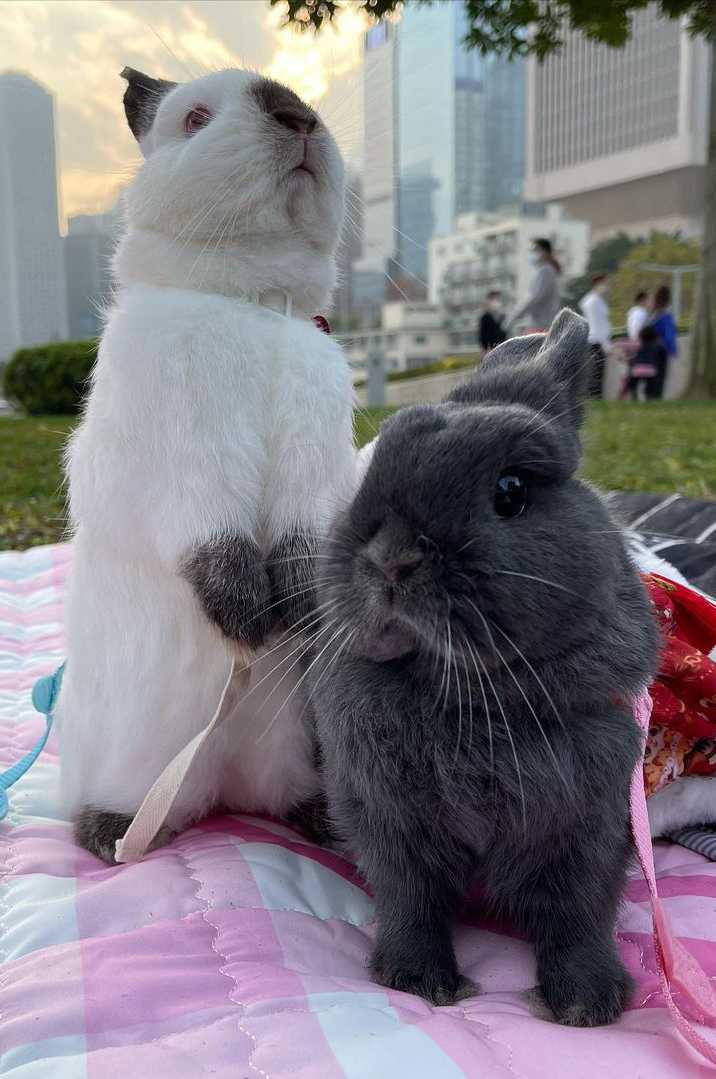 They are calm, docile, and gentle, that children can play with them. However, do not leave your Himalayan rabbits with children unattended. They are delicate furry animals that must be handled with care. Thus, if a child doesn’t know how to manage or play with the rabbits, the child might hurt them.

Himalayan rabbits are just like human beings. You must treat it as a social human being. Do not put them in cages, pens, or any enclosure. Putting them into these types of places or confining them will make them aggressive.

It is not also advisable to keep them confined as they need space to release their stored energy. 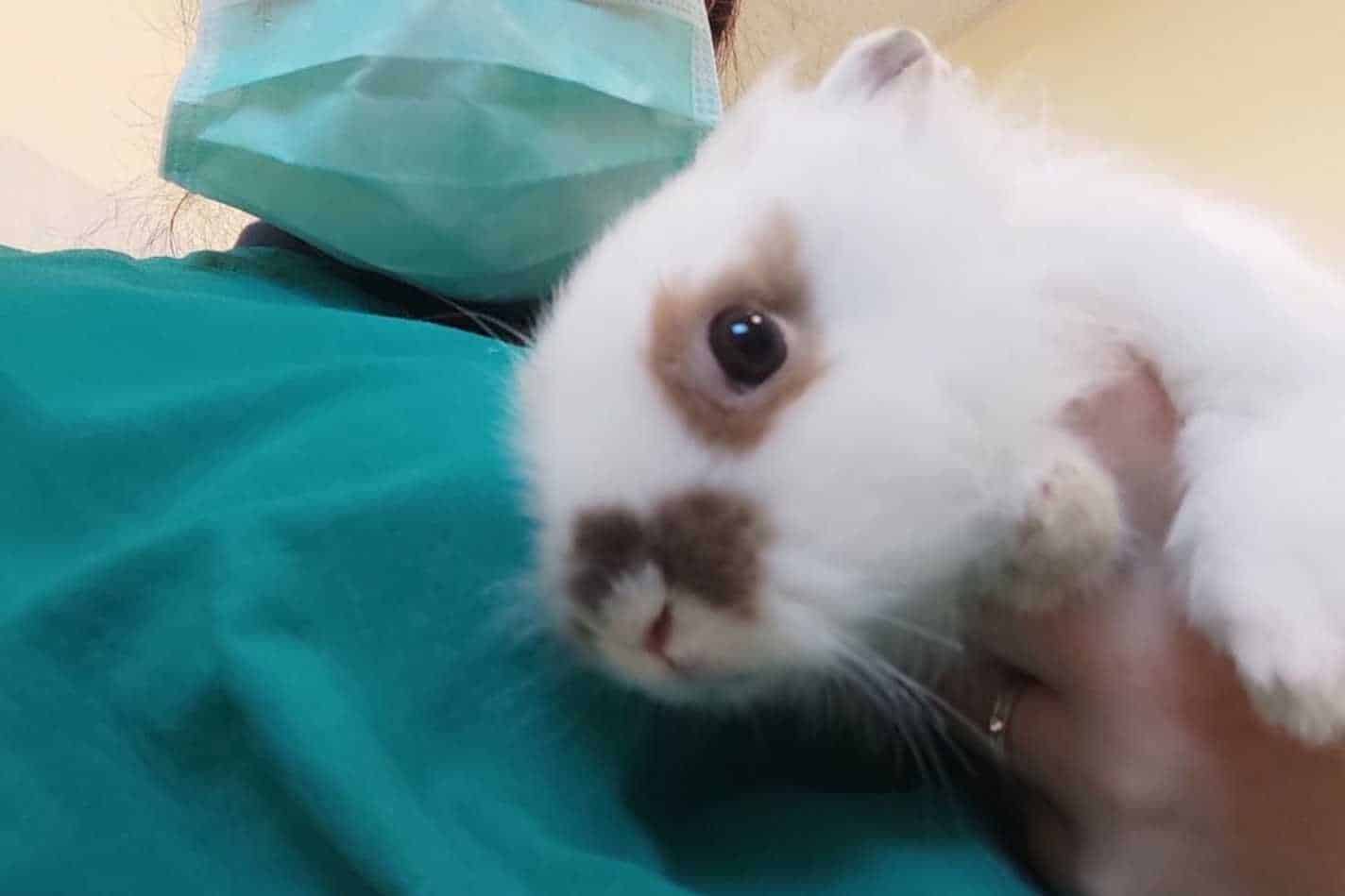 But just like any rabbits that were not given proper care, the Himalayan rabbits can also get the following:

Ear mites in rabbits are one of the most common health problems that both rabbits and rabbit owners face today.

Ear Mites is a parasitic infestation that may severely irritate your rabbits’ one or both ears. Unfortunately, this parasite, Psoroptes cuniculiis can spread swiftly and affect your rabbits’ other body parts.

There are several types of mites, but they have one common symptom. They are itchy.

Suppose you see your rabbit scratching its ears or certain parts of its body frequently, inspect it immediately. They might have a parasite in their body slowly burrowing their skin or feasting their flesh.

Since the leading cause of ear mites are parasites, you must isolate the infected rabbit from the healthy ones to avoid infecting the other rabbits.

The next thing that you need to do is give your Himalayan rabbits fresh bedding, hay, and cage. You may reuse the cage but make sure to thoroughly clean it to altogether remove the parasite on it.

Also, use clean grooming utensils and materials when grooming your Himalayan rabbits. Do not share your infected rabbits’ combs with the healthy ones. Otherwise, the latter will get infected with ear mites, too!

You may also use ivermectin to treat the ear mites in rabbits. Ivermectins are anti-parasitic drugs that can help your ear mite-infected Himalayan rabbit breeds get well.

However, if you have doubts about whether you can save your rabbits or not, we highly advise that you should bring that infected rabbits to the veterinarian.

This will also give them issues when eating. Since rabbits eat and chew a lot, overgrown teeth may cause them to lose their appetite.

The Himalayan rabbit breed with overgrown teeth may also be aggressive, moody, and inactive due to the stress that they get from the untrimmed teeth.

To avoid any protruding overgrown teeth in rabbits, you must have your Himalayan rabbit trained at a very young age. Start giving them hay, and ensure that around 70% of your rabbits’ diet is composed of hay.

Frequent hay-eating or chewing will help your Himalayan rabbits’ teeth grow in control. It will naturally file the teeth preventing them from overgrowing.

Another common health issue in rabbits that can undoubtedly have a fatal effect on your Himalayan rabbit breed is the flystrike.

Flystrike occurs when your Himalayan rabbits’ bottom is soiled with urine and feces. Their uncleaned, totally dirty, and unpleasant bottom will surely attract flies.

These flies will then lay eggs in your rabbit, making their skin and fur their nest. Once the eggs hatch, they will start eating your rabbits’ flesh until your rabbit dies.

Flystrike treatment includes cleaning their cages or pens and proper grooming. These things are the essential things you should learn when you have a rabbit since rabbits can quickly get diseases and infections.

However, if your Himalayan rabbits’ place is clean and if they are properly groomed, you must bring the rabbit to the veterinary clinic to have some tests. 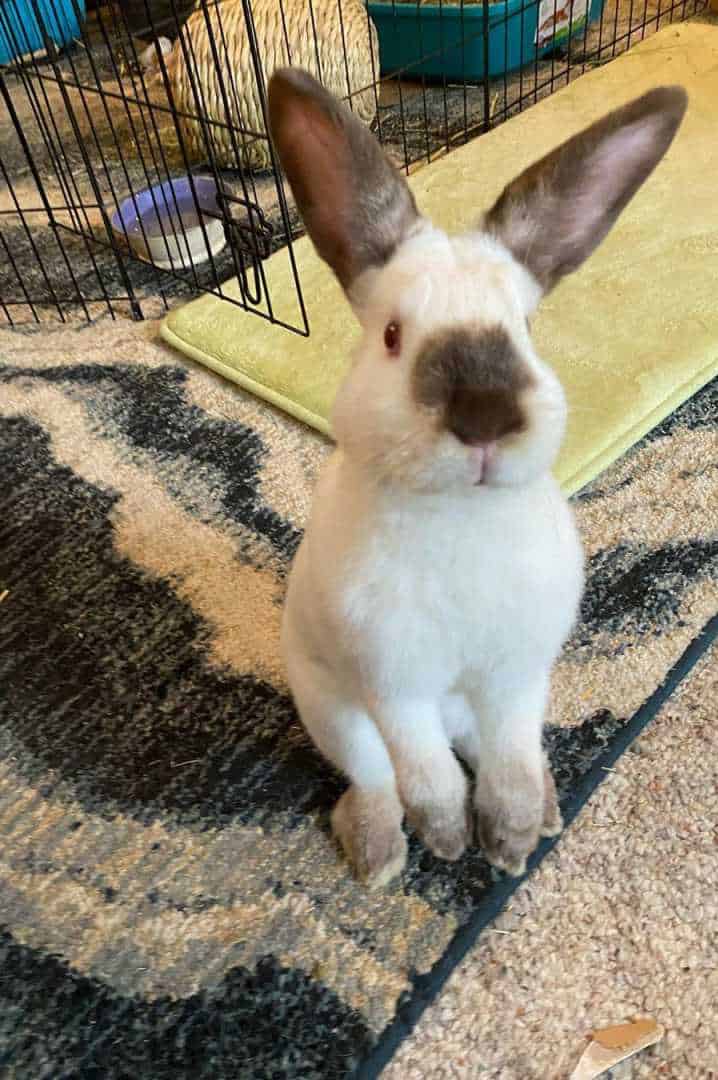 Himalayan rabbit breed is low maintenance. It doesn’t need fancy stuff to keep it healthy and clean. Thus, if you have owned a rabbit before, just follow all the positive care steps that you have done with your previous and existing rabbits.

But if you are a new rabbit owner, keep reading to understand how to care for a Himalayan rabbit fully.

We should not forget that like other rabbit breed, the Himalayan rabbits’ diet must contain at least 70% hay while the other 30% must include a variety of pellets, fruits, and vegetables.

Do not forget to install a spill-proof water dispenser to keep the Himalayan rabbits hydrated. Just make sure that you will change their water regularly. Changing the water every meal is the ideal thing to do.

Over time, your rabbits’ teeth might develop some plaque, and they might have some cavities. Your rabbit might feel some pain from an impacted tooth if this happens. This will affect their appetite and may lead to more severe health issues.

It’s not that you are making your Himalayan rabbit breed a little bit sassy, but you should bring your rabbits to the vet and have their teeth checked. Do this regularly.

When it comes to their fur, you must regularly brush them. You need to keep them clean, especially the Himalayan rabbits’ bottom, to avoid any mites and flies nesting on them. Keep them clean by combing, brushing, and washing them with a wet cloth twice or thrice a week.

Since Himalayan rabbit breeds are the active type of rabbits, make sure that you give them something that they can be busy about and exercise their muscles. You can give them toys that can stimulate both mental and physical aspects.

Grooming your Himalayan rabbits will not make any sense if their environment is dirty. Always keep their cage, hutch, pens, or your yard clean.

A clean environment will promote and give the best health status to your rabbit as it will not attract any bacteria, virus, or parasites that may attack your rabbits’ immune system.

Himalayan rabbit breed may not look as fluffy as the other rabbit breeds. But the rabbits that fall into this breed are the best pet rabbit you must have. They are low maintenance, active, docile, gentle, and most importantly, friendly that kids can play with them.