Rabbits come in several colors and sizes. Some are smaller, some are giants, some have pure colors, and some have combined colors.

While people don’t mind their rabbits’ color, some people prefer specific color combinations for their rabbits. Here are eight black and white rabbit breeds that you might like. 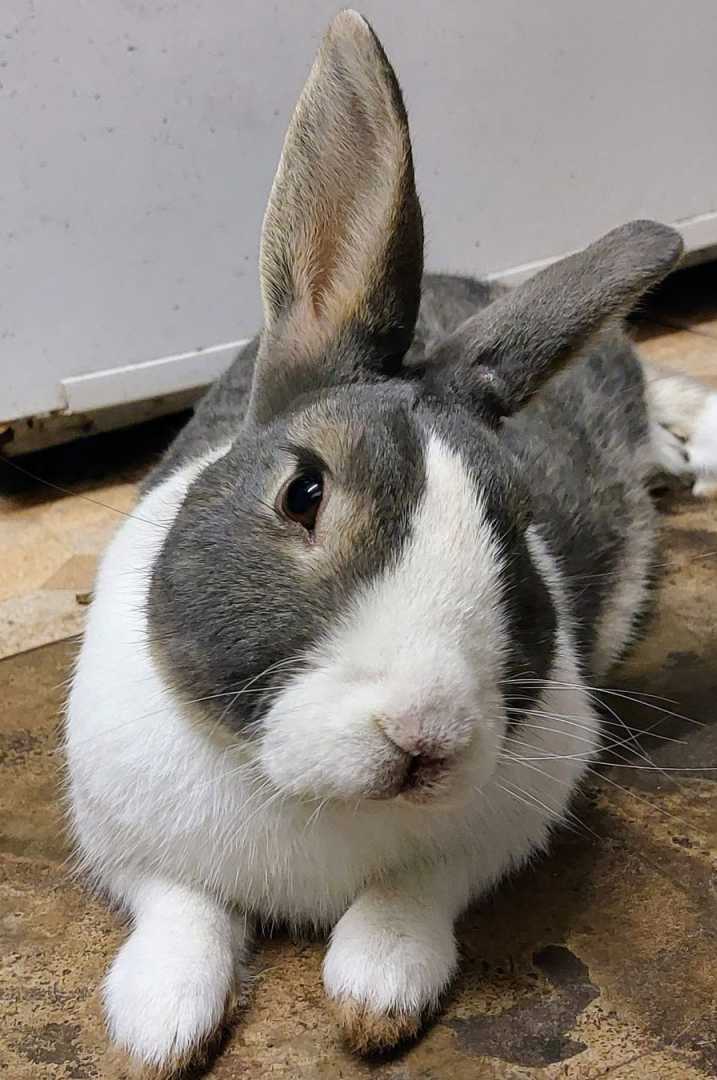 Dutch rabbits are pretty common and are easily recognized because of their noticeable markings and patterns. They originate from Belgium with the Brabancon breed as their ancestors.

Their white markings make them easily recognizable, and they can live for up to 10 years. Their white fur engulfs around their nose and half their body, resembling a saddle.

Their Dutch rabbits are under the smaller breeds of the rabbit’s spectrum. This breed is usually smaller, but they do not fall under the dwarf category.

Their fur is flyback meaning it quickly rolls back to its original position when brushed in the opposite direction. Dutch rabbits have rounded bodies and compact bodies. Their ears are erect and are usually very lively-looking.

These colors are all mixed with white, of course. Although they have a common pattern, there are always distinct differences as they are individually unique.

Dutch rabbits are gentle and docile, and so, they are perfect as pets. These bunnies are playful, too, around the right people. They are intelligent and laid back when they learn to trust you, so it’s important to give them the space they need before acting all close with them. 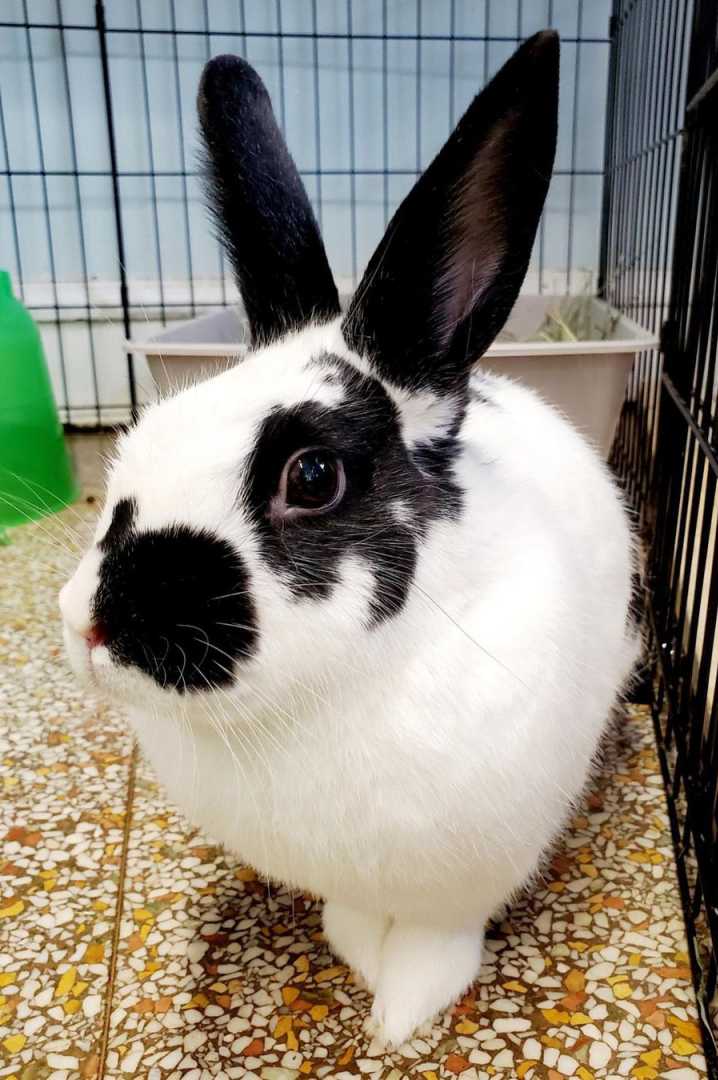 The English Spot is one of the oldest existing breeds. They have been present since the middle of the 19th century. English spots are medium-sized rabbits with remarkable types of fur.

You would easily recognize their white fur along with some dark-colored spots. While the exact origin of the English Spot is still unknown, there are several theories about their ancestors, like how experts relate them to the Great Lorrainese.

These bunnies were originally popularly used for shows rather than for meat, which rabbits were famous for during these times.

Today, they are popular as pets and companions as they are remarkably friendly and have a great temperament. These rabbits are one to have the best personalities out there.

They are very much one of the pets recommended for many people because of their gentle and affectionate nature. These bunnies are good for first-time rabbit parents as well.

So, if you happen to be a first-time rabbit owner, you can check out whether English spot is something around the type of rabbit you are looking for. They come in different variations of colors as recognized by ARBA too for example,

The English Spot also has a flyback fur with an average amount of shedding during particular seasons. Their fur is short, and these bunnies are relatively easy to groom. This means their fur is not too sensitive and high maintenance. 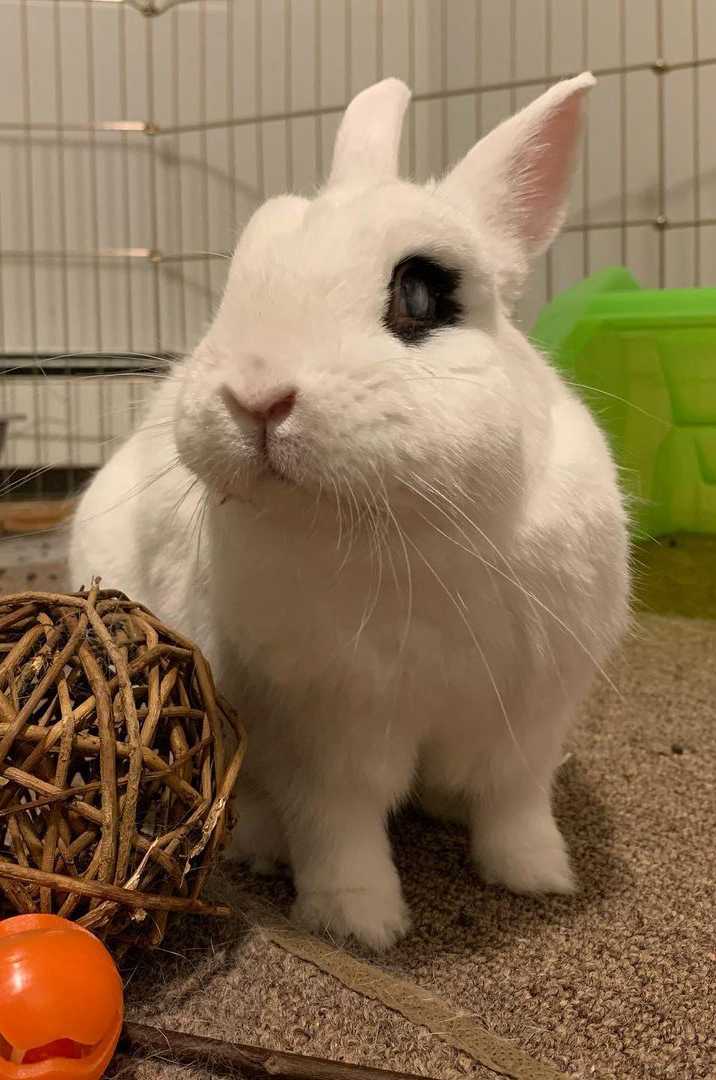 Dwarf Hotots are one of the peculiar furred rabbits you may encounter. The fur covering their bodies is white, but they have very distinct black fur surrounding their eyes.

These rabbits are dwarfed-sized with compact bodies. However, they can live for up ten years and weighs as much as 3.5 pounds. These rabbits experience molting at particular times of the year, but the more usual times are during Spring.

While these rabbits are often associated with being descendants of larger Hotots, they were achieved from crossbreeding different medium-sized Hotots.

Efforts to achieve the Dwarf Hotot were made in East and West Germany around the 1970s. As a result, we now have the opportunity to care for and interact with Dwarf Hotots. They are very distinct in physical features, especially their black fur surrounding their eyes.

The black fur around their eye resembles that of an eyeliner. Dwarf Hotots have short necks with full heads.

Their ears are thick and fluffy despite being shorter than usual rabbit ears. ARBA recognizes only one color combination: the white head and body fur and an eyeliner type of fur.

Apart from their distinct physical features, they also have a commendable temperament which makes them perfect as pets and companions.

However, it’s always important to note that these rabbits need to have their space and ample human interaction before warming up to you. Each rabbit has their unique personality, and to be able to genuinely show these, you would need to help them trust you first. 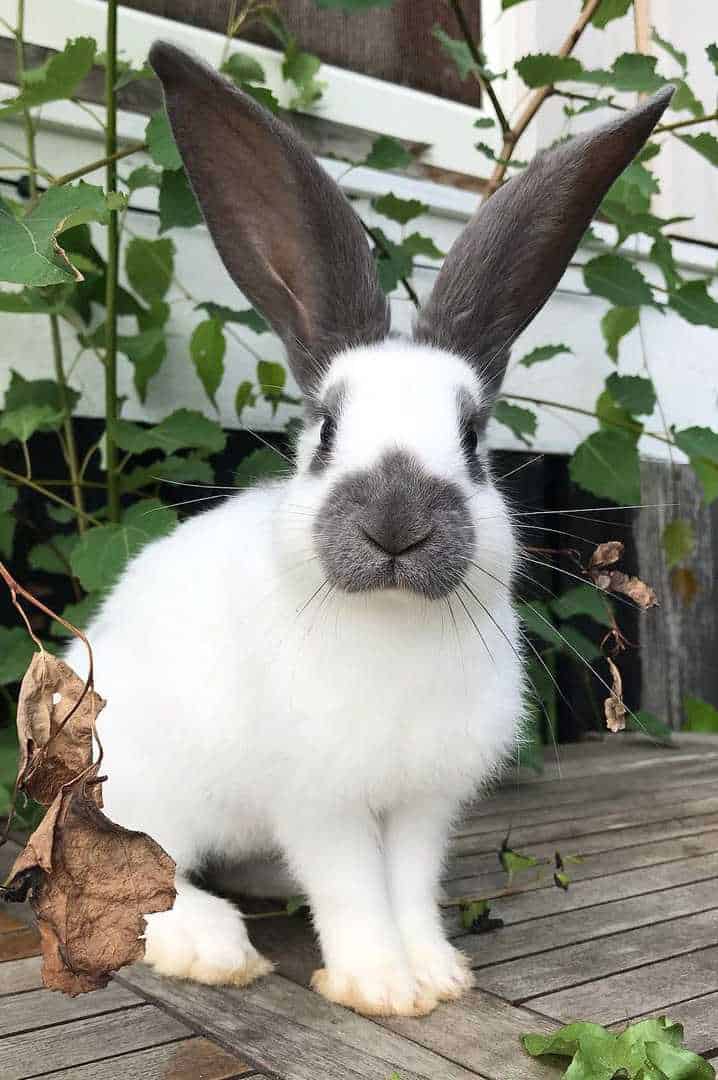 These giant rabbits can be challenging to handle because of their size, so it would take a dedicated rabbit owner to take care of them well.

Despite having a heavyweight and giant size, these bunnies have slender bodies and muscular frames so they can carry themselves well. They have strong and mighty legs that match their bodies well.

These rabbits also have wide heads. Their ears are also broad and noticeable. Their fur type is flyback or rollback and can be short to medium length. A Checkered Giant’s fur is soft and thick.

Despite their size, Checkered Rabbits can not require too much effort on grooming. The ARBA only recognizes color combinations for this breed. The rabbit should have white fur checkered with black or blue darker-colored fur.

Checkered Giants are not as affectionate as other breeds, but they are fond of playing and enjoy your company. These bunnies are active and like to play around with their space and friends. Despite being giant, they are very energetic and the type to enjoy toys and playtime. 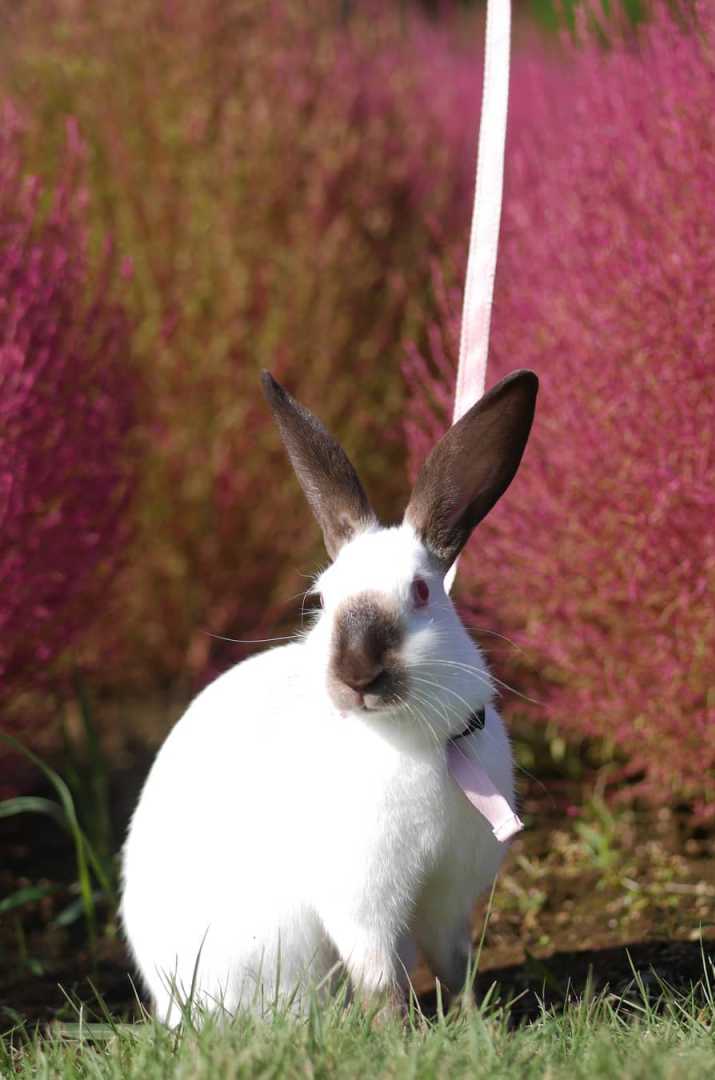 The Himalayan rabbit breed has been popular because of its distinct characteristics, specifically, its fur pattern. They have garnered a lot of nicknames because of their unique patterns.

They are sometimes labeled as The Black Nose Rabbit, Black Himalayan, Chocolate Himalayan, The Himmie, etc.

The Himalayan Rabbit originated in the Far East and have arrived in the United States during the 20th century. These bunnies were bred for their nice fur and have transitioned to being show rabbits, becoming one of the crowd’s favorite.

They were not only famous in shows, but they have also become famous as pets. As a result, Himalayan rabbits were one of the first breeds to get recognized by ARBA. The ARBA recognizes the following color for Himalayan Rabbits.

Their fur markings are typically located in particular areas of their body. These areas include their ears, paws, tails, and noses.

When it comes to their temperament, these rabbits like human interaction, especially when it’s their friend, someone they trust. These rabbits are gentle and the type to enjoy spending time with you.

If you happen to have children, these bunnies are also okay with children and get along with them. Himalayan rabbits are rabbits that like handling and cuddling.

They are smart rabbits, so it’s recommended that you stimulate them mentally by giving them toys to enjoy. Himalayan rabbits are also the type to need time out of their cage. They need the freedom to roam around and play outside. 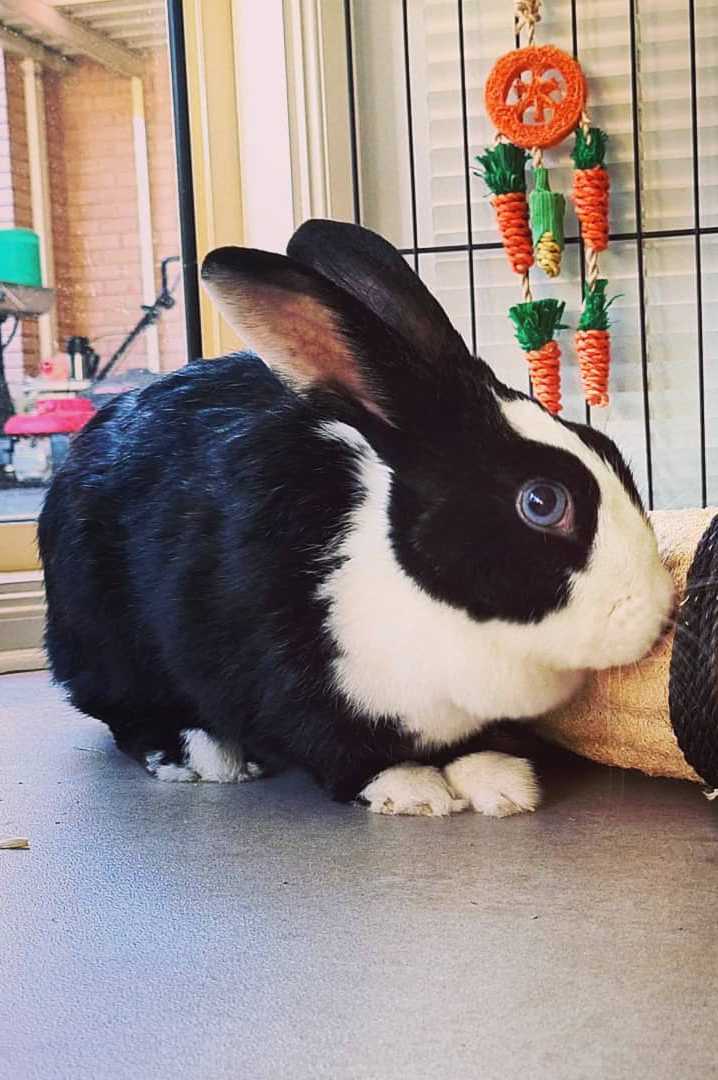 Mellerud rabbits are popularly bred in Sweden and are one of the oldest breeds of farm rabbits out there. These bunnies were recognized as farm rabbits in 1881.

They are bred for their fur and meat thus, categorized as farm rabbits. However, in the 1900s, people have thought that this breed has become extinct because they have disappeared from the former “popular farm rabbits” radar.

Fortunately, they were not extinct, and society was able to rescue the Mellerud rabbits from extinction.

Their ears should relatively be thinner than other breeds’ ears. As for their coat has a short type of fur, and their coat should be fine.

ARBA recognizes only two color combinations or variations for Mellerud rabbit’s fur, including albino and black with spots. They can weigh up to around 7 pounds and live for as long as eight years.

Mellerud rabbits are lively and energetic animals. Their good temperament and nice personality make them suitable for petting. However, they do not interact well with younger children as they could be mishandled easily and at risk of injury and shying away from you.

However, older children can learn how to pick them up and interact with them. Therefore, they can be raised with older children as long as the kids are capable of proper handling. 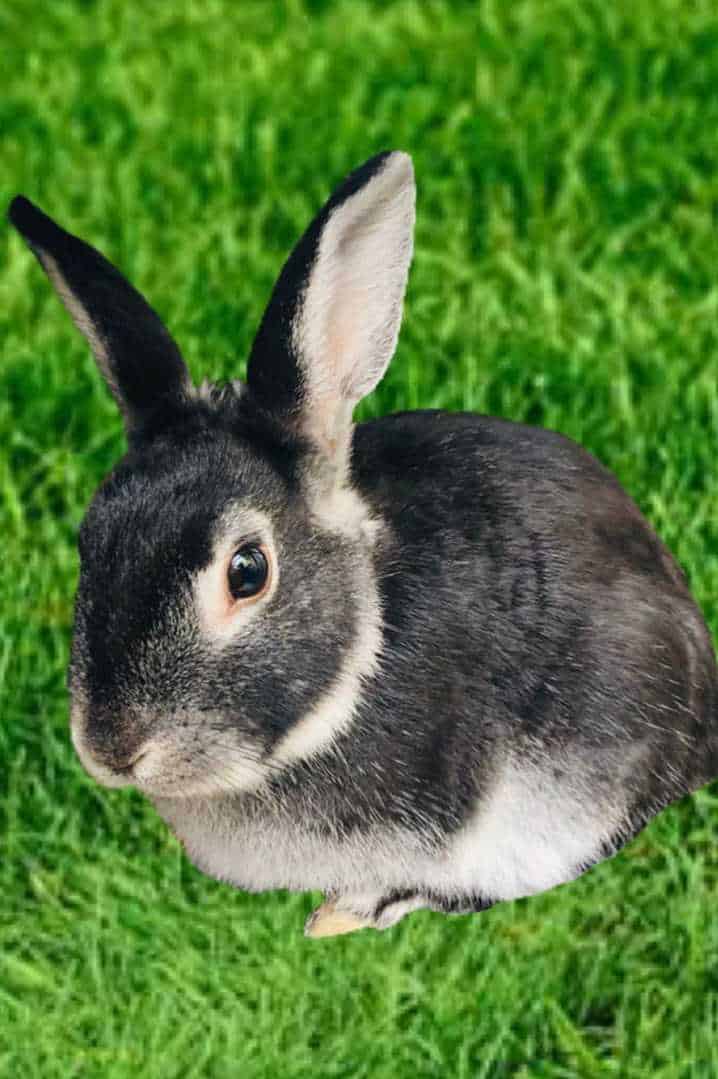 Silver Marten rabbits are also called strange little black rabbits or little black and silver rabbits because of their fabulous fur. These bunnies are medium-sized rabbits that can weigh up to nine pounds.

They were introduced and bred in 1924. This breed was achieved to develop a better rabbit breed than the Chinchilla breed. And so, the process has produced a rabbit breed with great fur quality in the shades of black and silver.

A Silver Marten rabbit’s fur type is flyback and might as well be one of the best coats you could ever encounter. Their fur is shiny, soft, and lively.

Their coat pattern consists of black color on the top and is lined with silver on the bottom. ARBA recognizes the following colors for Silver Marten rabbits:

For the top section

Despite these rabbits being originally bred for shows, they make great pets. These bunnies are calm and playful. If properly exposed to the right environment of playing and cuddling, they could be very friendly.

They can be timid at first when in the process of adjusting. As time passes, they could be more open as they warm up on your home and learn to trust you more. 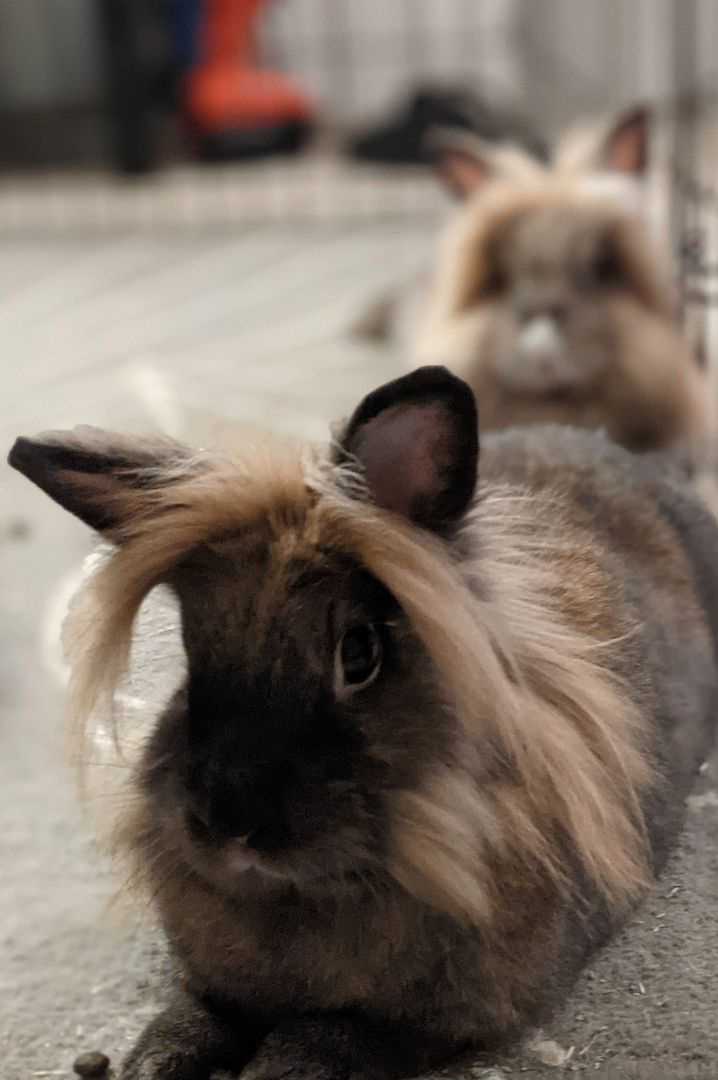 Lion Head rabbits are among the new rabbits in the league. They have been popular in the 1990s and have been continually going up in the popularity chart.

These rabbits are famous and noticeable because of their thick and long hair. From the name itself, you can assume what they may look like. They have something resembling a lion’s mane, so they were termed after it.

These bunnies are among the smaller breeds that weigh 3-4 pounds when mature. They have long and thick hair, which requires care, of course. Grooming is especially important for lion heads because their hair tends to get tangled and knotted together.

It would be best if you aimed to avoid this situation as it could be painful for them and you may have to end up cutting their hair. Lion Head rabbits come in several color combinations. A Lion head rabbit can be marked, tan, agouti, etc. Here are some of the recognized colors.

As for a Lion Head rabbits temperament, they are timid, gentle, docile, and friendly rabbits. While they can be friendly and docile, it’s good to note that they are not recommended for kids.

These rabbits are smaller in size and fluffy. Kids can crowd on your rabbit and handle them improperly. This could risk your rabbit’s safety, so it’s important to ensure that the kids know how to handle them before putting them in the same space to play together.

When looking for a specific color combination for rabbits, researching is the best way to start. For example, suppose you prefer black and white, eight black and white rabbit breeds.

It would be helpful if you have friends who can refer breeds. Overall, reading and learning about the possible characteristics of a said breed is helpful.