Rabbits are beautiful animals to have around. They are mainly reared as pets and for sports, but some keep them for meat and fur.

Irrespective of your reasons for keeping them, there are some factors that you should consider before going for a particular breed. The Dwarf Hotot Rabbit is quite common among some rabbit breeders, but here’s what you should know.

How Did The Dwarf Hotot Rabbit Come To Be? 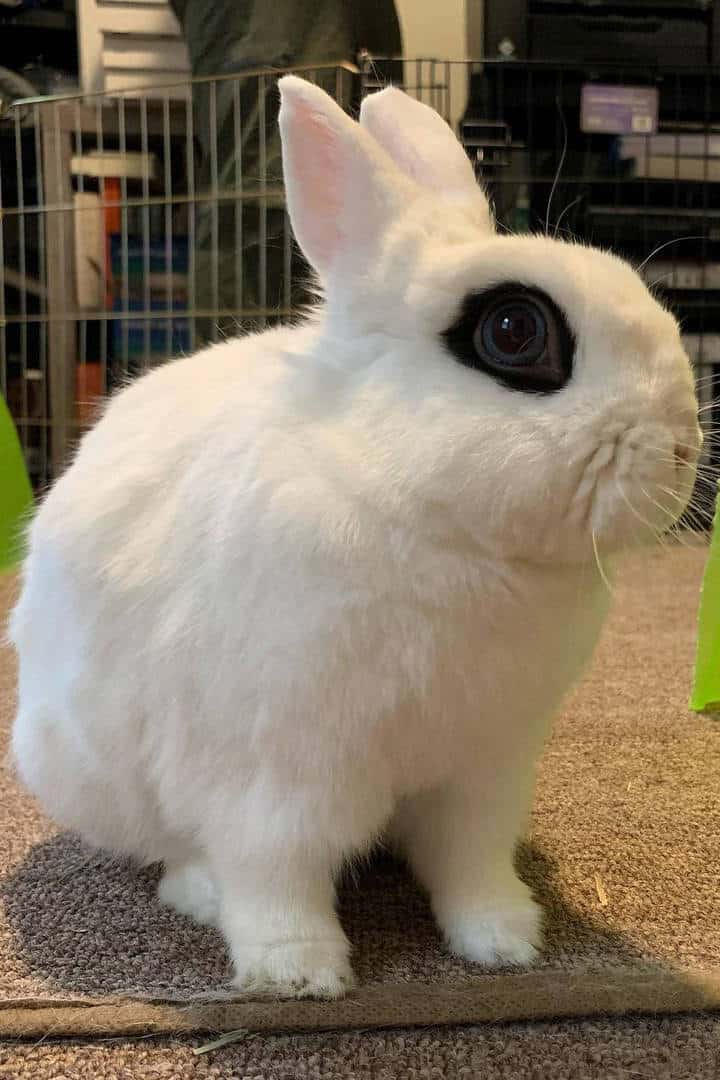 The Dwarf Hotot is one of the breeds with complex origins. It has its root in the prominent Blanc de Hotot family. In the 1979s, breeders decided to have a miniature replica of the larger Hotot.

Coincidentally, two breeders from Germany set out to work on this, one from the East and the other from the West.

It was nicknamed ‘Eyes of the fancy,’ and the reason is not far-fetched; there’s a black ring around their eyes that makes them unique and beautiful.

After this successful experiment, it was brought to the United States of America, and a Dwarf Hotot Club in America was formed in 1982. ARBA, the American Rabbit Breeders Association, approved it in 1983.

Like every other dwarf rabbit, the Dwarf Hotot is small-sized and weighs 2.5 to 3.5 pounds, even at maturity. The unique look of the rabbit has endeared it to the heart of many rabbit rearers.

Not many rabbits have a plain color (white) with a contrasting color (black) circling their eyes; this is exactly how this unique rabbit looks.

This rabbit breed is portable with a compact body and a full head standing on a short neck. Their hind regions are round and balanced with their broad shoulders.

Their ears are not long but thick. Asides their striking looks, Dwarf Hotots also have friendly and pleasant personalities, making them an ideal choice for pets.

If you desire to show your Dwarf Hotot, you should know that the Association recognizes and accepts only one color combination for this rabbit breed.

The qualities include; the rabbit must be plain white with a black band around its eyes to be allowed in a show. This black band should be neither thick nor thin, about ⅛ inch thick.

Furthermore, Dwarf Hotots possess short, full, shiny furs that stand upright when stroked. The good thing is that their coats aren’t difficult to maintain; comb them once in a while, and they are good to go.

However, their furs molt during spring. During this period, you might want to increase the number of times you brush their coat. This will protect your home from having loose hair flying around and save the rabbit from ingesting the hair during grooming.

What’s The Temperament Of The Dwarf Hotot? 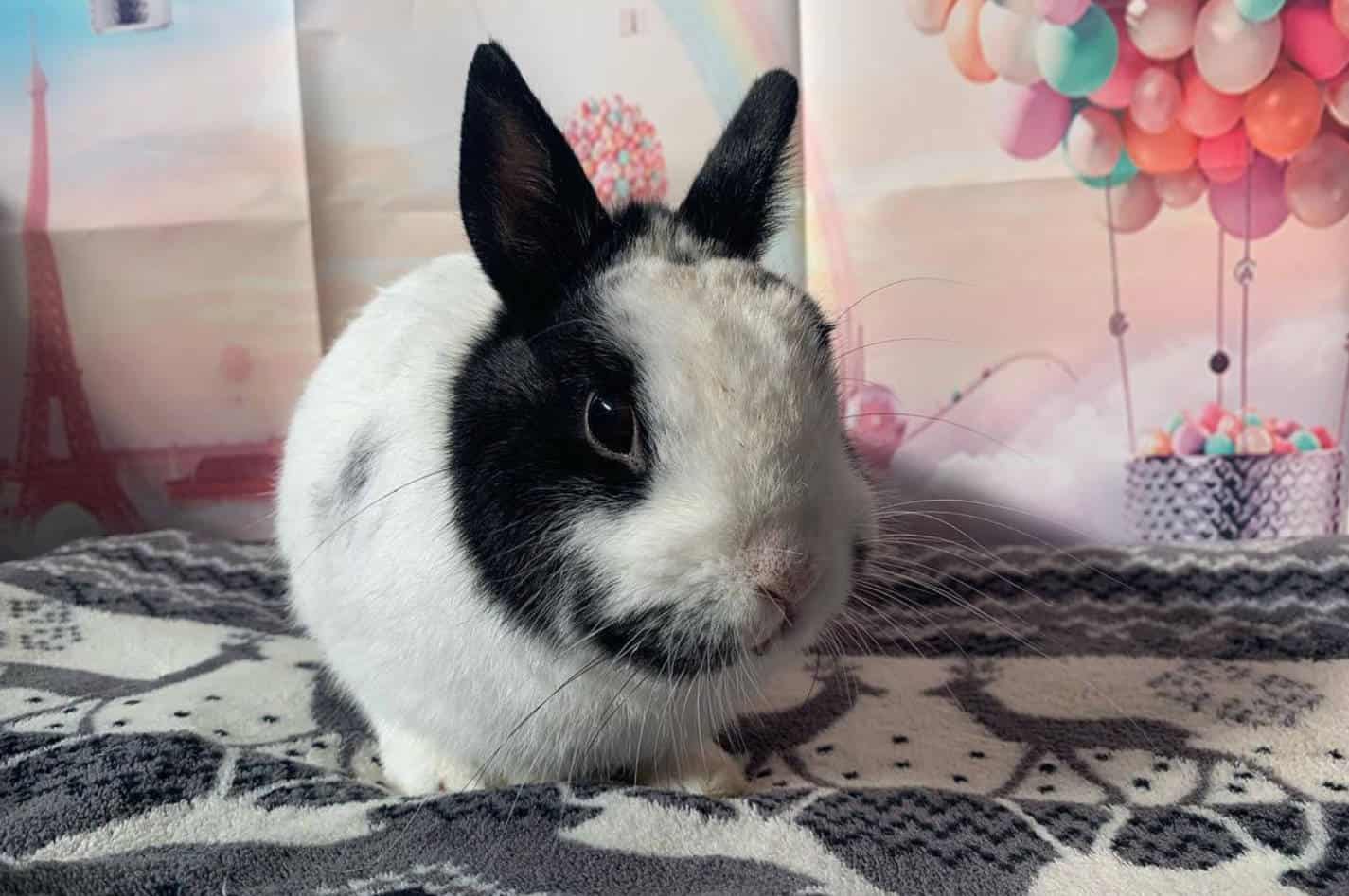 Known to be friendly, which is evident in its nickname as a “life pet,” the Dwarf Hotot can socialize with people and its environment if you train it to.

To get the best of this breed, ensure you take them out of their enclosure every day, starting from when they are still young.

Do well to keep this routine for a long time as it helps them bond faster and become quickly committed to their human companions, whether elders or children.

It would help if you were careful when letting them out of their enclosure; they could jump hard on you, especially after a long time alone.

Although the Dwarf Hotot rabbit is not as active as other breeds, it will run around with you before getting tired, and this is due to its small size.

You could also provide it with toys to play within its cage,  keeping it engaged while you are busy with other stuff. There are varieties of toys for bunnies; you might want to check with your pet store.

However, this rabbit breed has not always been friendly; it has some hostility. It was recorded that they had a reputation of biting when examined in the showing ring.

With time, they outgrew that behavior pattern, and it became less frequent for them to bite during shows, and now it is non-existent.

Is Dwarf Hotots Susceptible To Diseases? 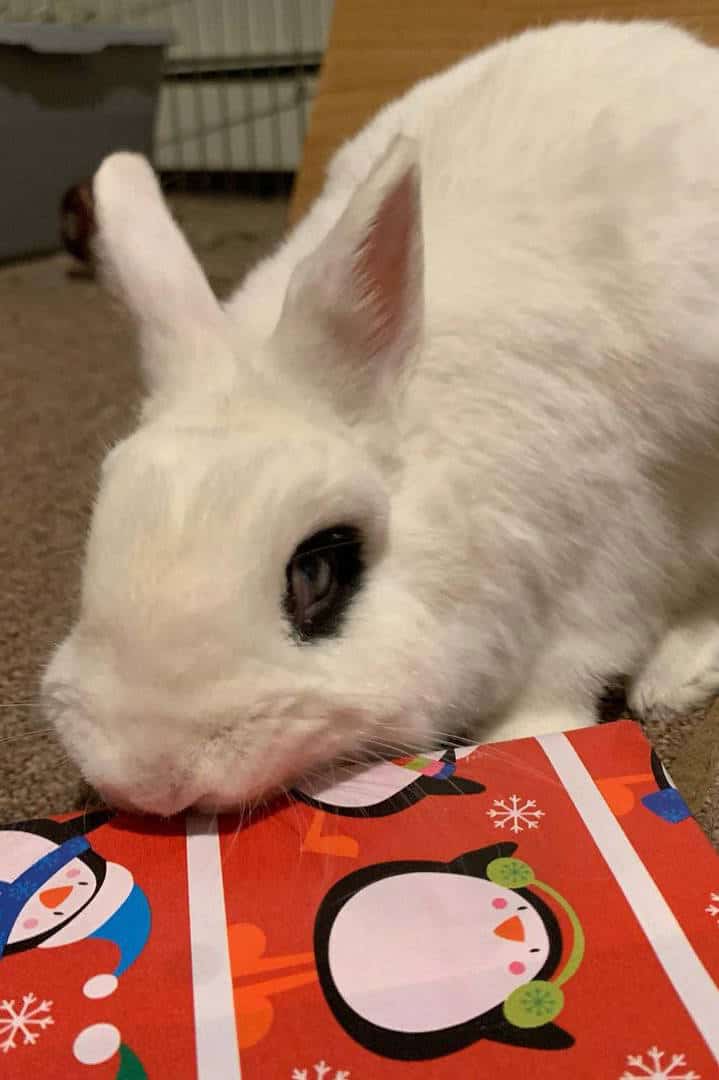 If you have small-sized bunnies, you need to be exceptionally careful. Your utmost attention and care make them live as healthy and long as possible.

Although there are no general diseases associated with apartment rabbits, many health issues can cause complications if not detected and contained early.

A common complication is snuffles, a respiratory tract disease that usually affects all rabbits no matter their breeds. The symptoms include runny nose and eyes, dropping heads, etc.

You should be on the lookout for these signs to save your rabbit when the sun still shines if they get infected.

To reduce the chances of your rabbits’ chances of reproductive cancer, you should neuter them as soon as possible. Male Dwarf Hotots can be neutered between three to four months, while females can be spayed only when they clock four months old or above.

However, to ensure the operation is seamless, you can tell your vet doctor to wait for the doe to get older before working on her. Another health issue rabbits are prone to be Woodblock.

As rabbits clean and groom themselves, they tend to swallow fur dropped from their coat. When this happens repeatedly, the accumulated fur becomes a furball inside their digestive system.

Since rabbits can’t regurgitate, the furball gets larger till the digestive tract is blocked. The rabbit also feeds less as it thinks it is full.

In addition, one of the diseases common to all kinds of dwarf rabbits is Malocclusion, a dentition-related issue. Here, the front and the lower teeth are directly opposite, which should not be.

Usually, the lower teeth are supposed to be in front of the front teeth. The rabbit may mistakenly pull a tooth from its cage when this happens.

It will also affect its eating mode as it will have difficulties chewing its food. If your rabbit has this disease, get your vet to see them so their teeth can be shortened. Also, deworm and give them flea prevention treatment.

Finally, watch out for head tilting in your Dwarf Hotot rabbits. Ear and parasitic infections cause head tilt, making the rabbit’s head tip to a side. Call in a vet doctor to identify the cause and administer medications – your Dwarf Hotot will recover in no time.

3 Ways To Care For Your Dwarf Hotot Rabbit 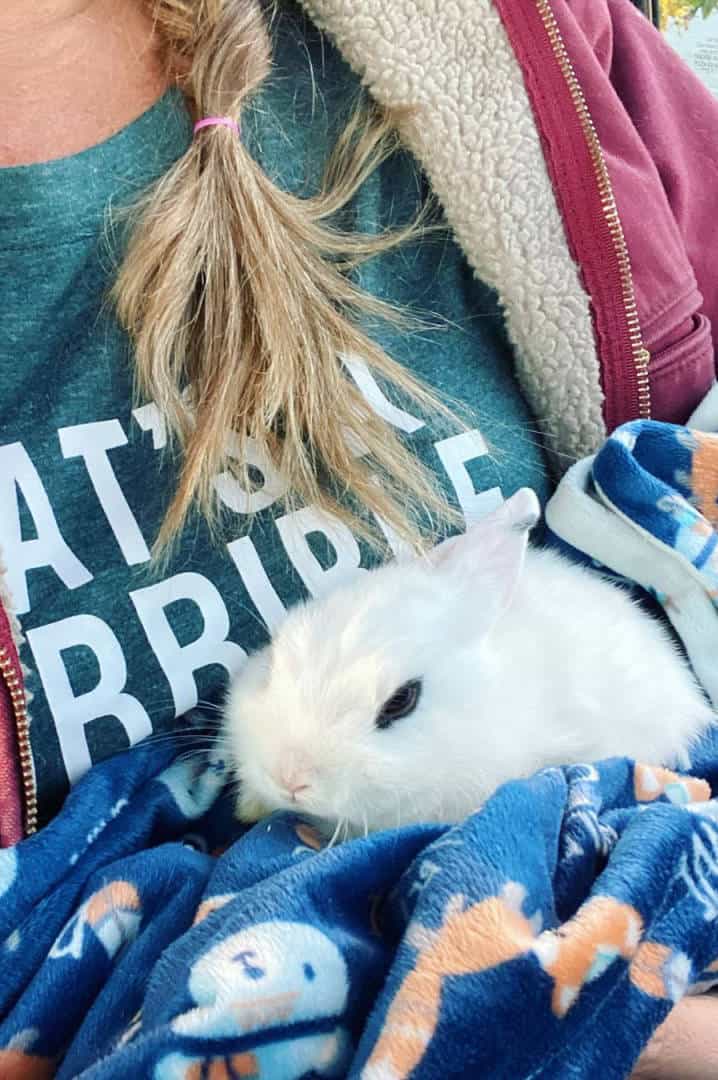 The Dwarf Hotot rabbit, like every other dwarf, is easy to care for due to its small size. Here are some tips to follow: 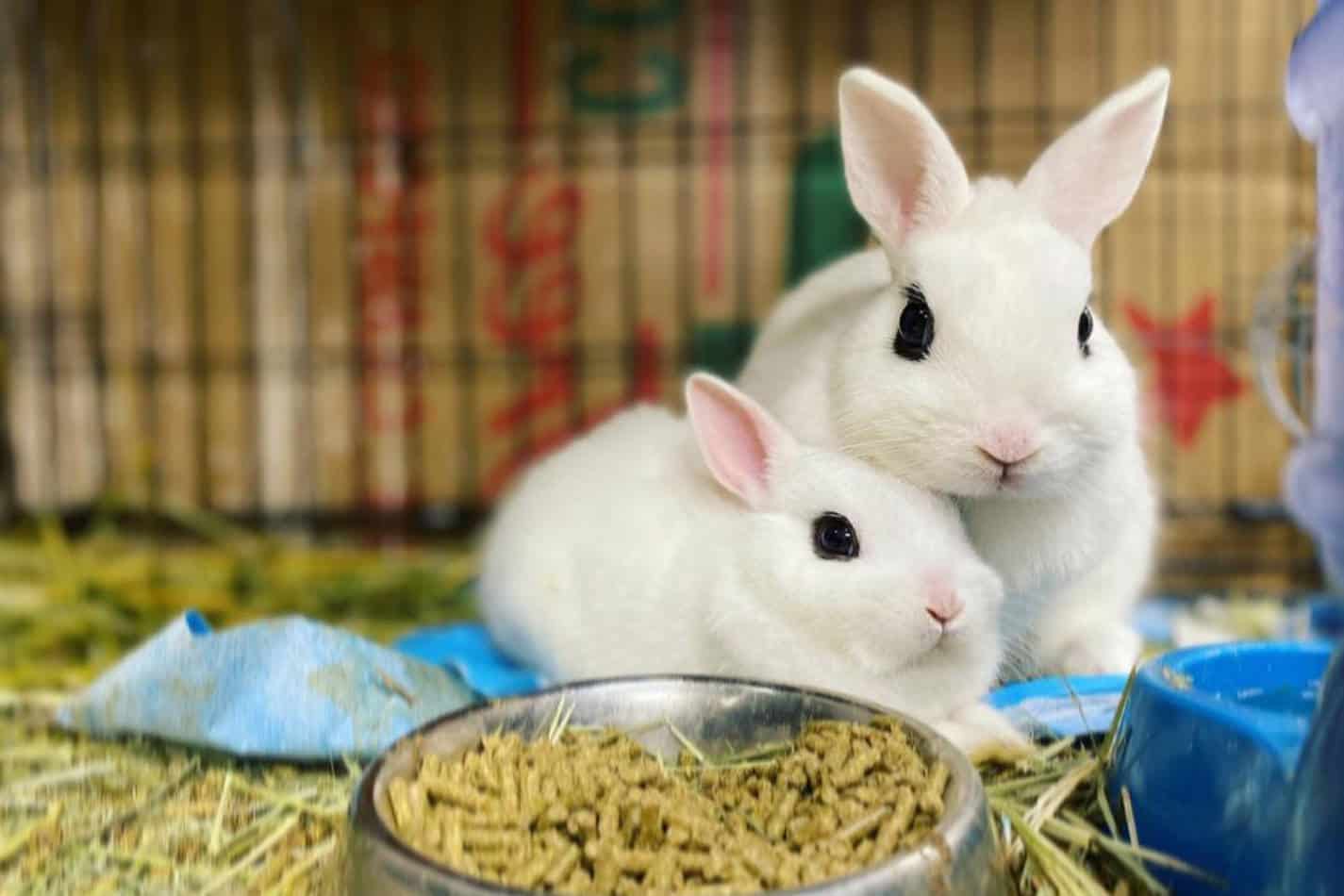 As long as you keep giving it food, the Dwarf Hotot will continue eating. This isn’t ideal, though. You don’t want your pet overweight, so you should stick to the recommended diet.

You can give it as much hay as you want, but pellets should be measured; a quarter cup per day will keep it going.

A daily balanced meal for a Dwarf Hotot should be 70 % percent hay, a quarter cup of pellets, non-poisonous green leaves, veggies, and fruits in the right proportion.

However, you should pay close attention to their feeding habits every day. Once you notice any irregularity like going off their food, not drinking, or pooing regularly, then it is time to bring the doc in.

Here’s How To Make Your Rabbit Reproduce 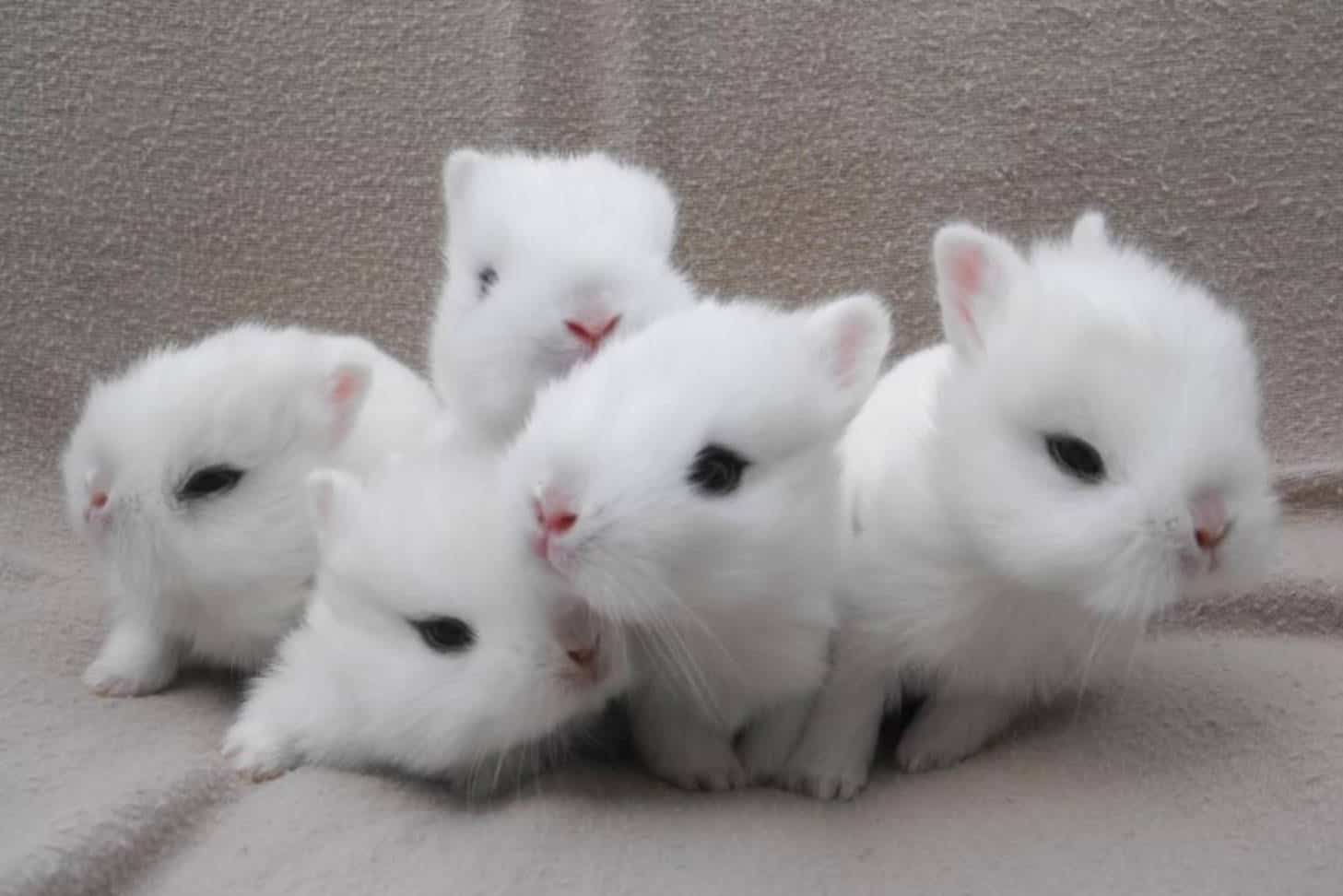 If you want to make money out of your bunnies, then this is for you! Introduce the female into the male cage and leave the rest to nature. The male will start smelling the female while she starts to run around.

She’ll give in once she gets tired, and the male will try to mate. When the mating is done, the doe will be ready to have her kits in the next few weeks. You need to provide a nesting box stuffed with hay to keep the new members warm.

The doe becomes disturbed when she is ready for labor; you might notice her food and water are untouched. She will move into the nest once she is ready. The Dwarf Hotot rabbit gives birth to at least three kits and five at maximum.

The  kits are usually naked, blind, and deaf. If there is a stillborn, the doe eats it and nurses the others for a short period, mostly at night. She covers them with hay during the day to keep them warm.

The kits’ eyes are opened on the seventh day, and they will hop out of their nest on the tenth day.  The kits wean from their mother’s milk and will be ready to have cuds like green leaves and other soft edibles.

Interestingly, the doe will be ready to become pregnant again in no time, almost immediately after giving birth, while the new bunnies will be ready to mate in just a few months. Read more about rabbit reproducing.

Dwarf Hotot rabbits are cool, friendly, and enjoyable to have around. Their small sizes make them handy and ideal as pets.

However, knowing what it takes to rear this unique breed will give you more insight into their lives and characteristics and whether or not you’ll consider them, either as a first-time owner or repeat rabbit breeder.