Are you looking for a handsome rabbit to add to your family? Well, maybe you’d like to recruit the king of the rabbit in your household! Let’s get to know the Rex Rabbit today.

This rabbit is known for its velvet-like fur. However, as you will see today, the Rex Rabbit holds so much more for you. If you’re ready, let’s hop into this rabbit’s world! 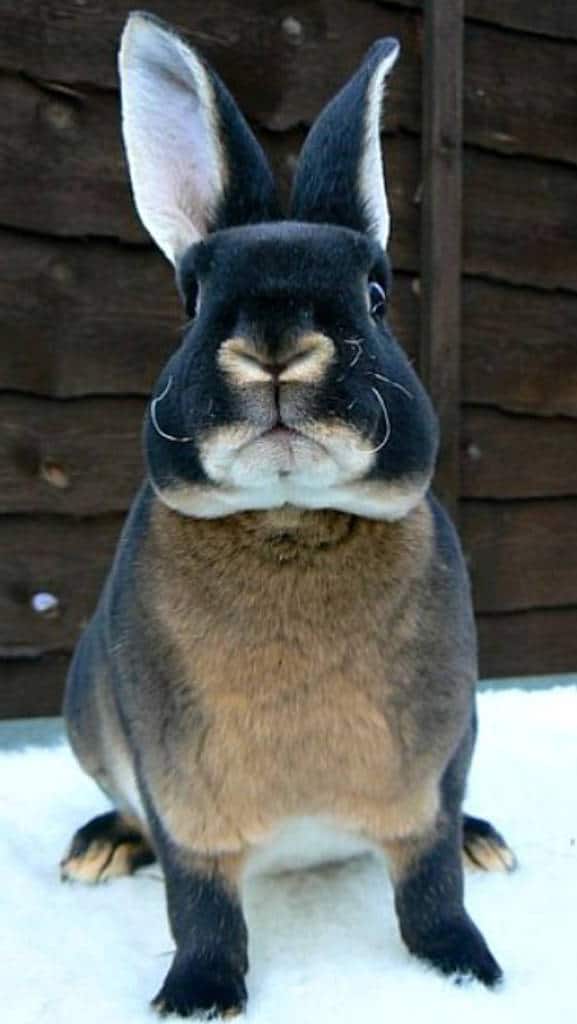 Brief Background and History of the Rex Rabbit

Before we continue, let’s quickly take a look at the history of the Rex Rabbit.

Their history goes way back to the early 1900s. It was in 1919 that Rex Rabbits first came to be. In 1924, you could say that these bunnies made their debut in nonother than the lovely city of Paris. In the same year, through John Fehr and Alfred Zimmerman, these rabbits made it to the United States.

With these rabbits’ beauty and charm, it didn’t take long for them to be recognized. As you will see in a bit, they’re accepted in more than one known organization.

Breed Standard and Appearance of the Rex Rabbit 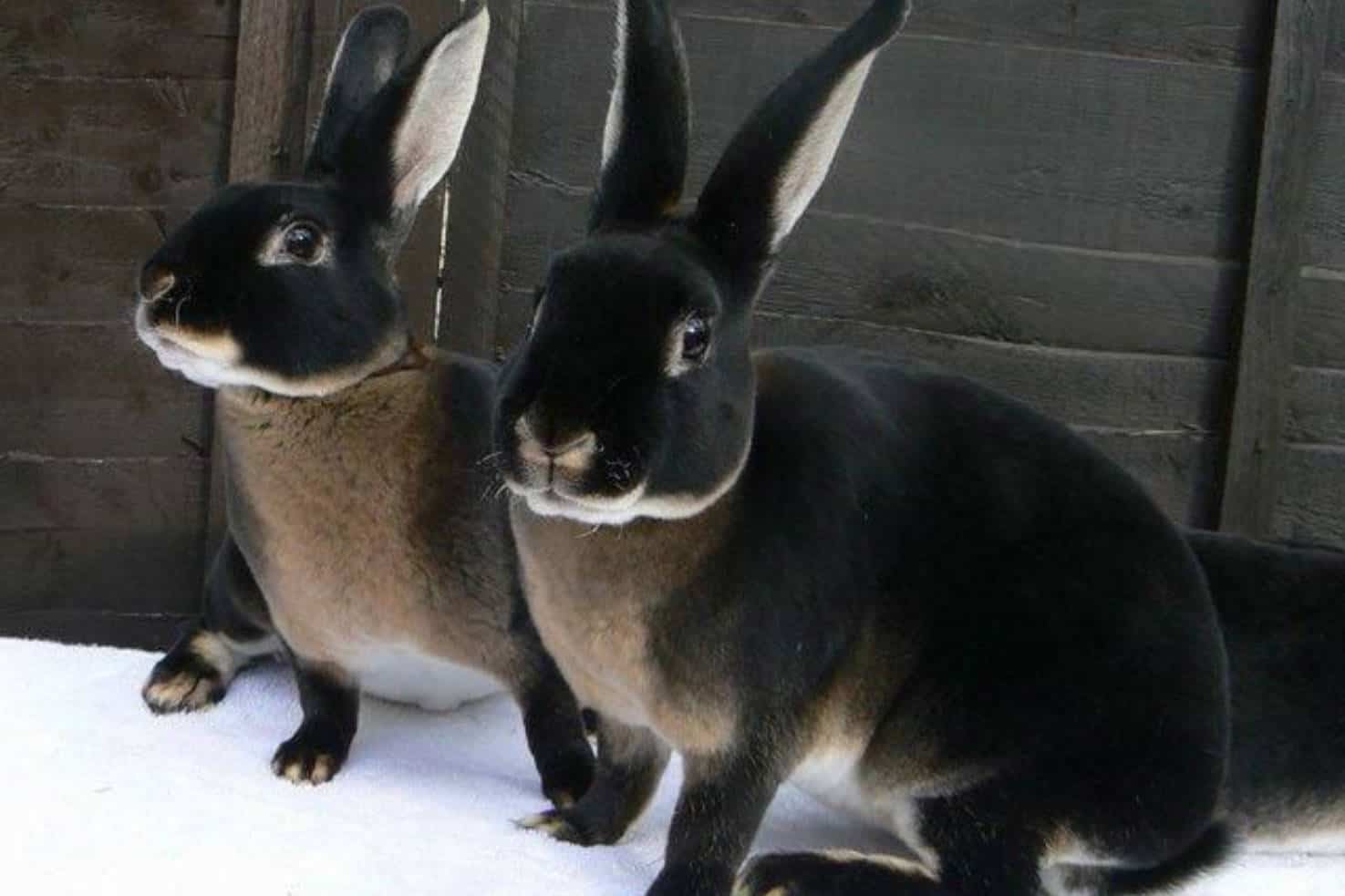 The Rex Rabbit is famous for its velvet-like fur. However, as we’ve said, there is more to this rabbit than its fur. Let’s take a look at its other charms in this section.

The Rex Rabbit is known as the king of the rabbits. Many might assume it is one of the heavier breeds. That’s not the case, though!

As we’ve said above, the Rex Rabbits are only medium-sized. They weigh around 4 (kits) to 10.5 (adult does) pounds. Now, if you’re observant, you’d notice that we said the higher range pertains to the does!

When it comes to the Rex Rabbits, the females are generally heavier than the males.

Next, let’s talk about body shape. Another thing that sets this rabbit apart from others is its body shape. Their bodies are often described to be balanced. So, if you can’t put your finger on why these rabbits are such beauties, it is probably this.

As they are known as the king of the rabbits, it might be ideal to shine some light on their ears. Their ears stand tall and upright on their heads as if complementing their balanced bodies. You could say these ears serve as crowns for these kings.

Now, if you might have noticed, we didn’t list any colors in the brief overview. That is because there are so many colors and varieties of the Rex Rabbit! We’ve set an entire section for this topic alone. 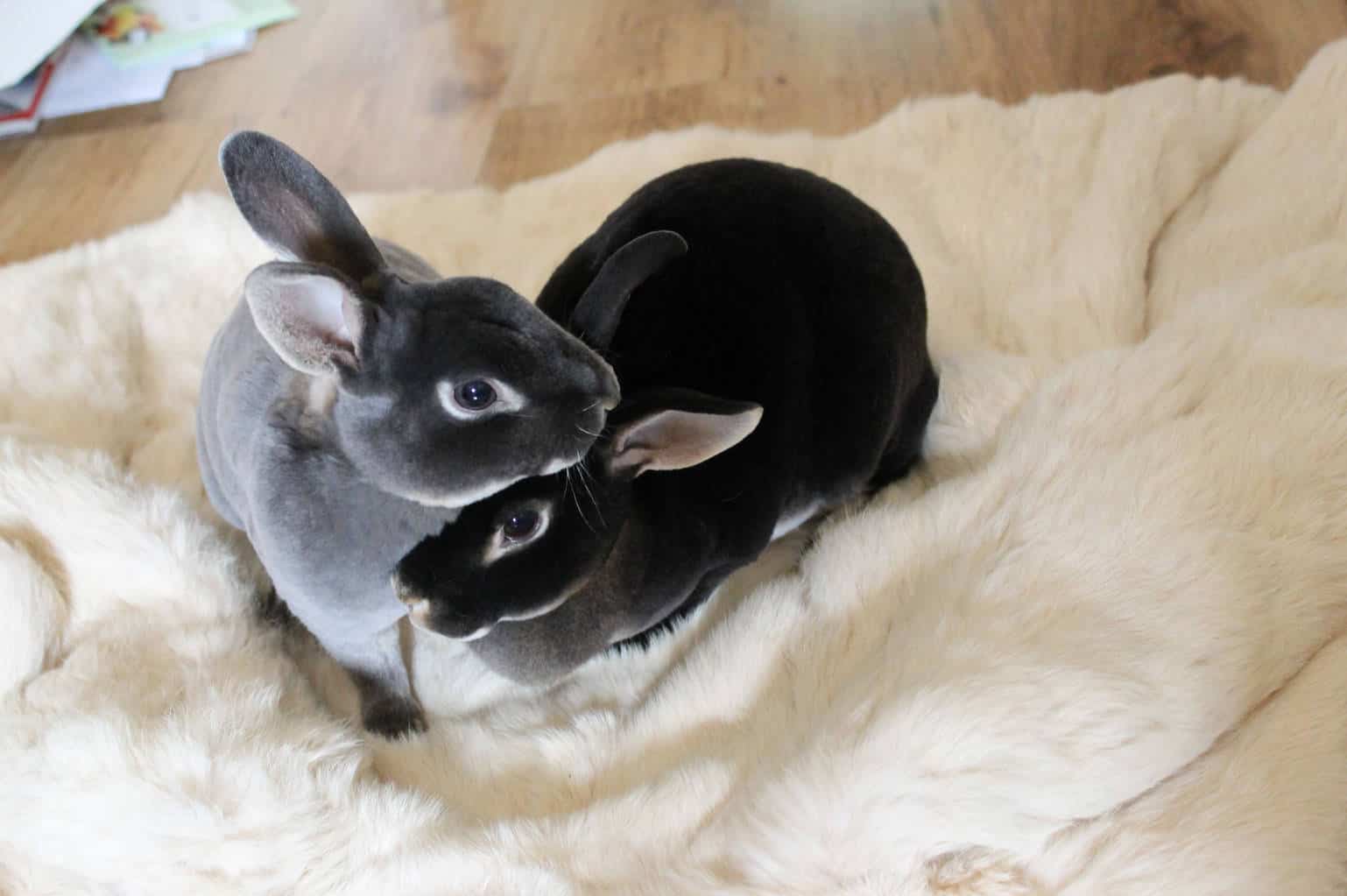 This rabbit is recognized by the American Rabbit Breeders Association (ARBA) and the British Rabbit Council (BRC).

The former only recognizes 16 varieties, while the latter accepts 32 (two pertain to the Mini Rex, which we won’t include in the chart). Let’s briefly take a look at these varieties here.

As you can see, there are so many varieties from which you can take your pick! If you want to go for solid colors, you might want to go for a black or blue Rex Rabbit.

On the other hand, you might want to go for a Broken or Californian Rex Rabbit for some pattern. Whatever you’re looking for, there is most probably a Rex Rabbit for you!

Personality and Temperament of the Rex Rabbit 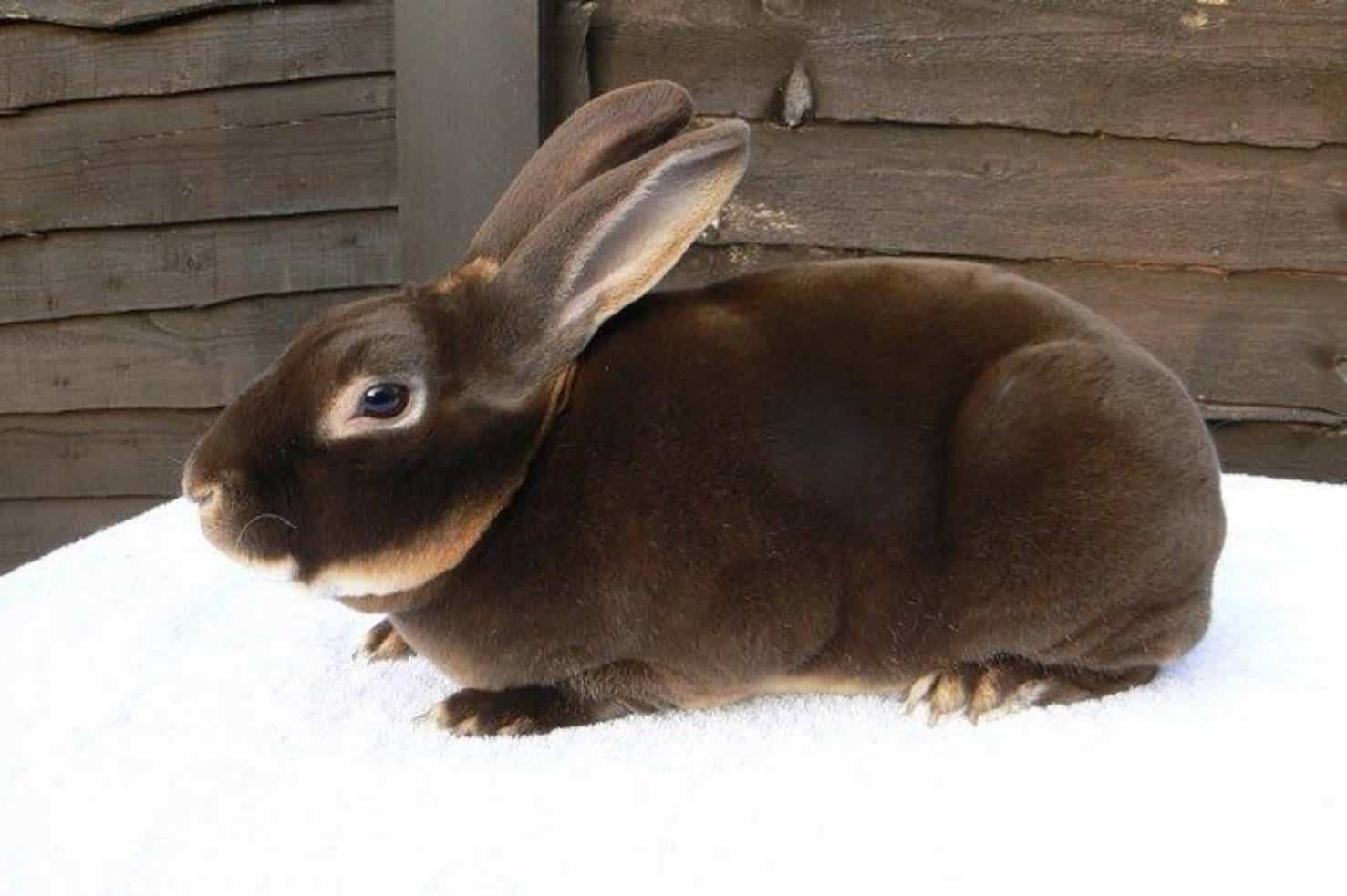 The Rex Rabbits looks like a real charmer. Does that mean they are a charming breed, though? Well, let’s answer that in this part.

Well, you don’t have to worry if you’re looking for a friendly furry friend. These rabbits are known to be a friendly bunch. If you handle them right, they’d let you pet and cuddle them.

It doesn’t mean they can’t be aggressive. In certain instances, they could. They could be aggressive when they are still young or, of course, when threatened.

It is not their general temperament, though. If they do show signs of aggressiveness, it’ll likely pass or disappear at some point.

Many want a friendly rabbit. However, not everyone wants a bunny that’s way too playful and excitable. Not everyone has the energy, after all. Sounds like you? Well, you might be happy to know that the Rex Rabbit is often described as calm.

In addition to being friendly and calm, these rabbits are also nurturing. They are almost always happy to care for others’ kits. So, if you need a foster mom, the Rex Rabbit doe might be for you! Still, that’s not all there is to the king of the rabbits!

These rabbits are also one of the most intelligent rabbit breeds out there. So, if you’re looking for a smart companion, you don’t have to look any further.

As you can see, the Rex Rabbit doesn’t only have the looks to charm its adoring fans. It also has a charming personality!

Health and Health Issues of the Rex Rabbit 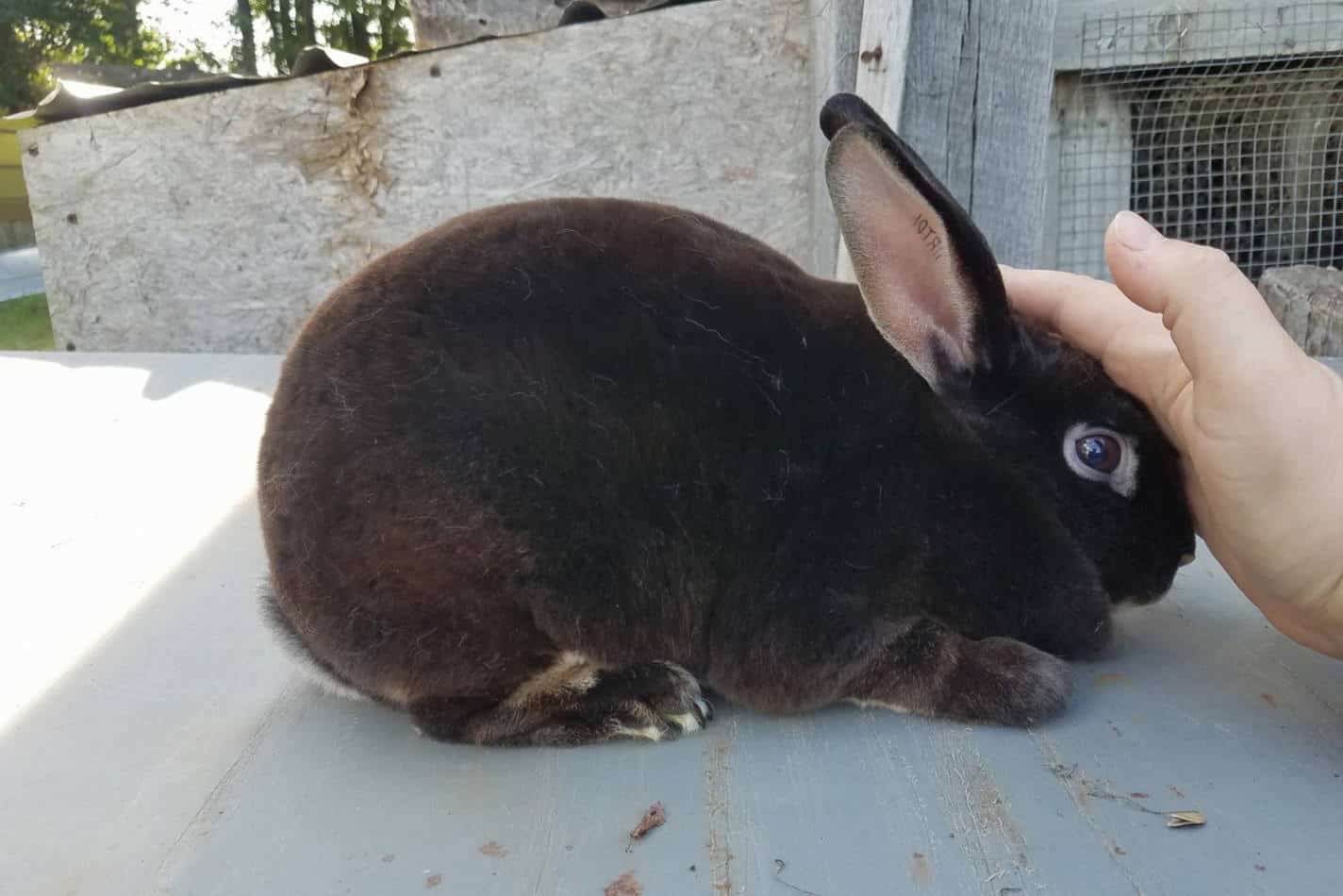 Here, let’s talk about the health of your Rex Rabbit.

As we’ve said in the overview, this rabbit is known to live around 5 to 6 years. Generally, rabbits are known to live for around 8 to 12 years.

As you can see, these rabbits seem to live a shorter period than the average bunny. If you’re thinking of taking a Rex Rabbit home, their lifespan might be one of the things you might want to keep in mind.

Despite the short lifespan, these rabbits are not known to be sickly. You could say they are a healthy breed as they are not prone to any bunny diseases. All you have to worry about is the usual health concerns. Let’s quickly talk about some of them. 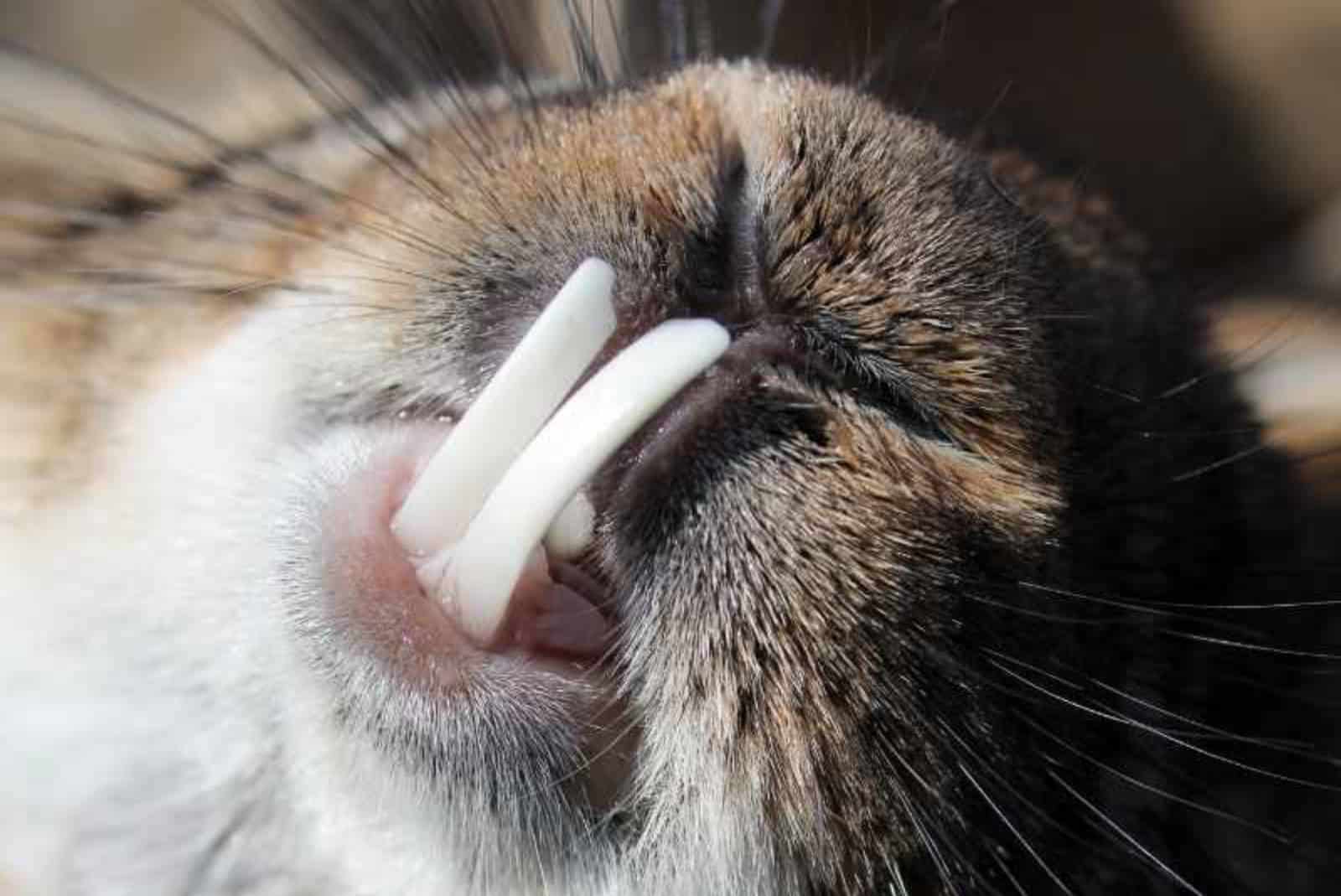 This one is straightforward. It is what it sounds like it is.

A common problem in the bunny world is overgrown teeth. You might be surprised to know, but our furry friends’ teeth never stop growing.

It’s easy to miss this fact. It is one of the common mistakes some bunny owners commit, and it sure is not an easy mistake for our little friends.

One way to prevent this condition from happening is a well-balanced diet. Make sure you offer your rabbit roughages!

Bunnies out in the wild often don’t experience overgrown teeth as they spend their time munching on grass. You want to try and let your bunny do the same. Give them something to chew on at all times!

Now, you might be wondering if there is a way to undo this damage. Yes, there is. However, it is not as easy as you might imagine.

Some will tell you that you can do this treatment at home. However, we highly suggest against it! It might look very doable, but you don’t want to risk making a mistake.

Rabbits are living creatures. They might not be able to tell you how much something hurts, but a wrong move in this area, and we believe it will put your rabbit in greater pain. Leave this treatment to the experts. 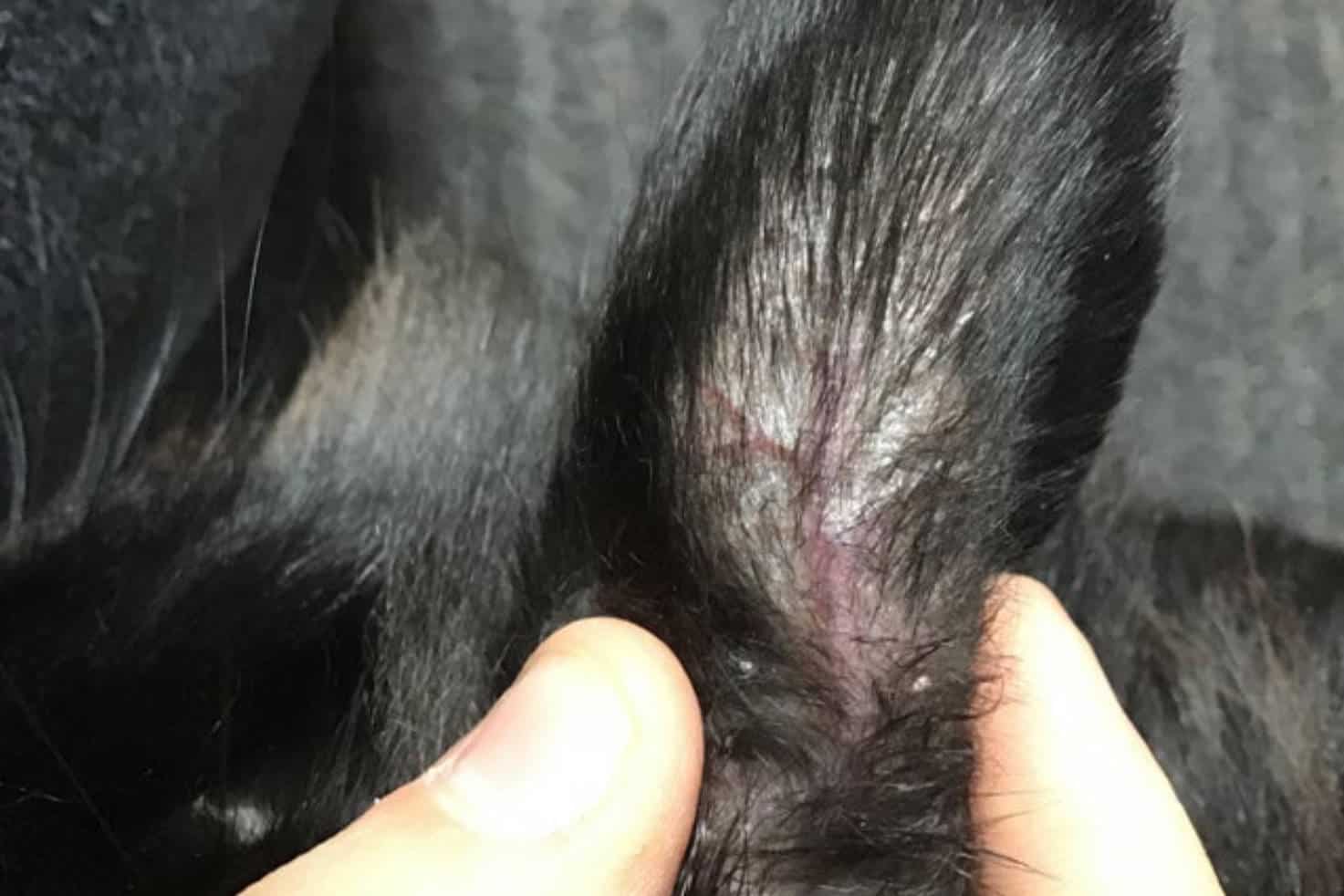 Next, let’s talk about ear mites. Ear mites are a parasitic problem. They might only target one ear or both the ears of your furry friend.

It might start as harmless itching. However, over time, it will be painful for our little friend. It might look like a small problem, but ear mites could be fatal.

There are several ways a rabbit could get ear mites. If it is allowed to roam outside, it might get it when passing by tall grasses and such.

Now, what if it is an indoor rabbit we’re talking about? It could have gotten it second-hand from another rabbit or any object that has been infected.

Here’s how you can try treating this problem at home:

Caring for the Rex Rabbit

Now, let’s talk about how you should care for these rabbits.

The diet of this rabbit is no different from the average rabbit.

Rex Rabbits may not be that playful, but they need their exercise. Ideally, they should get as much exercise as they could. However, if that is not possible, make sure you give them at least 3 to 4 hours of exercise every day.

This rabbit might only be medium-sized, but you still need to give it enough space to roam around.

Additionally, if you are going to house your rabbits in a wire cage, you want to make sure to put some type of bedding. You don’t want them hurting their little feet, after all!

You don’t have to worry much about grooming. Rex Rabbits don’t need to be groomed as often as the other breeds. Of course, you still need to groom them from time to time, but you don’t want to overdo it. It might do more harm than good that way!

Why is the Rex Rabbit Best Suited for Seniors?

If we go back to the overview, you might notice we said the Rex Rabbit might best be suited for seniors. Well, let us explain.

As we’ve discussed, these rabbits are friendly. However, they’re also known to be a calm breed. It makes them a good candidate for owners who don’t want to play all day.

These rabbits could already be happy by sitting on your lap when you’re watching some television or reading a book.

To add, the Rex Rabbit doesn’t require too much work. You have to take care of their needs, but you don’t have to groom them as much as the others.

They still do need some grooming, of course. However, you don’t even want to overdo it as it might damage one of their prized possessions – their fur.

Finally, another reason they might be great for seniors is their weight. If you can remember, they’re medium-sized bunnies. They won’t be too heavy to carry.

With all that, it might be a good time to note that it doesn’t mean Rex Rabbits are only for seniors! They could also be good pets for couples, families, and many more! There might be one kind of owner that is not ideal, though. Let’s talk about them next.

Now, many might tell you that these rabbits could be great for kids. That might not always be the case, though.

As we’ve said above, these rabbits could be aggressive. They might not welcome hugs and cuddles if you don’t handle them properly.

As you might already know, toddlers could be rough at times. In that case, your toddler might accidentally hurt your rabbit. In turn, your Rex Rabbit might attack.

As a rule, hold off letting your toddler interact with your rabbit until it learns how to handle the little creature right. If you want the two to get acquainted early, make sure you always supervise their interaction.

Today, we talked about the Rex Rabbit! We learned that this bunny has much more to offer than its velvet-like fur.

Today, we also learned about its beginnings and its history. We also discussed their other charms, like their upright ears and uniform bodies. After that, we also got to know about the personalities of our furry friends.

We got to know so much about these lovely creatures today, and we hope we were able to satisfy your curiosity! Hop on to our other discussion if you have any more questions!