If you’re looking for a first animal companion for you or your kids, then the Mini Rex rabbit is the perfect pet of choice. Its size and plushy fur take bunny cuteness to another level.

Get to know more about this popular rabbit breed’s characteristics and maintenance before bringing one home to your family.

An Overview of the Mini Rex Rabbit Breed 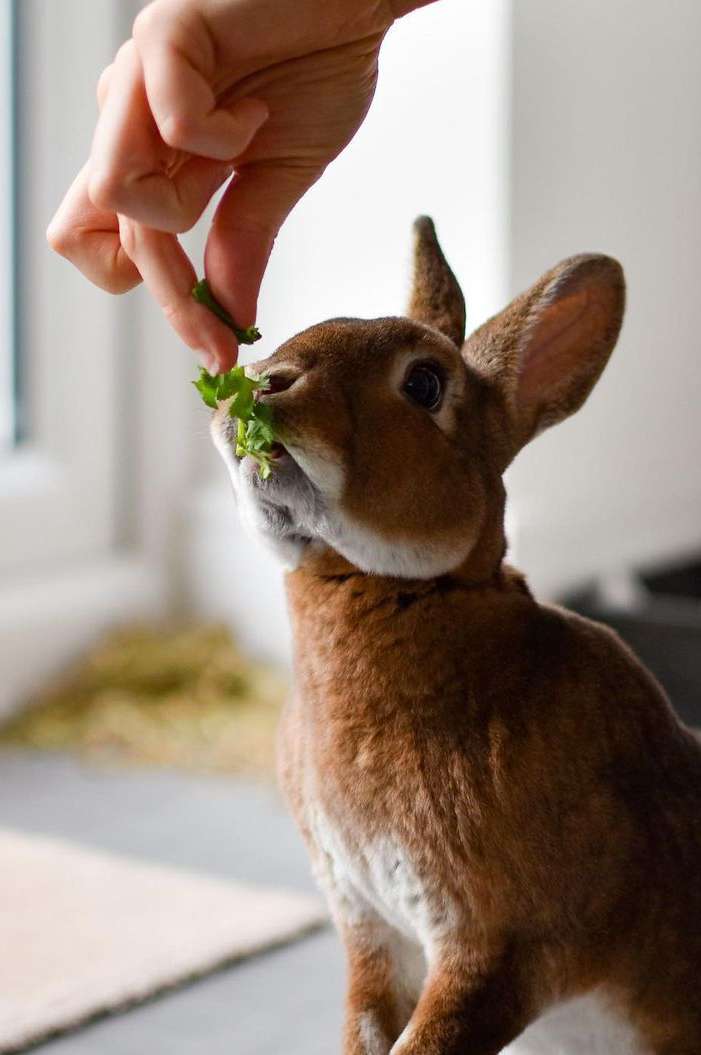 To give you an overview of this rabbit breed, here’s a quick summary of its essential features.

Background and History of the Mini Rex Rabbit

The Mini Rex rabbit, as the name implies, is a tinier version of the Rex rabbit. It is a popular breed in most rabbit shows because of its soft, velvety fur and adorable size. Unlike several rabbit breeds that date back hundreds of years ago, the mini rex was discovered only in 1984.

She bred a dwarf Rex with a small-sized female Lynx Rex, and the first Mini Rex rabbits were born.

It was her dream to have the rabbits accepted as an official breed. In 1985, she attended the ARBA convention in Houston to present her Mini Rex rabbits.

Unfortunately, people met her endeavor with little interest and much ridicule. Monna did not lose sight of her goals and presented again at the 1986 convention. She was able to win the community over, and the association approved a working standard for the Mini Rex breed.

At the 1987 and 1988 ARBA convention, Ms. Berryhill presented the Mini Rex again. It passed all qualifications and was accepted as an official breed in 1988.

Other rabbit breeders followed suit and started introducing various varieties of the breed. It has become popular up to this day due to its Rex gene, small size, and velvety fur. All thanks to a woman with sheer determination and love for the breed. 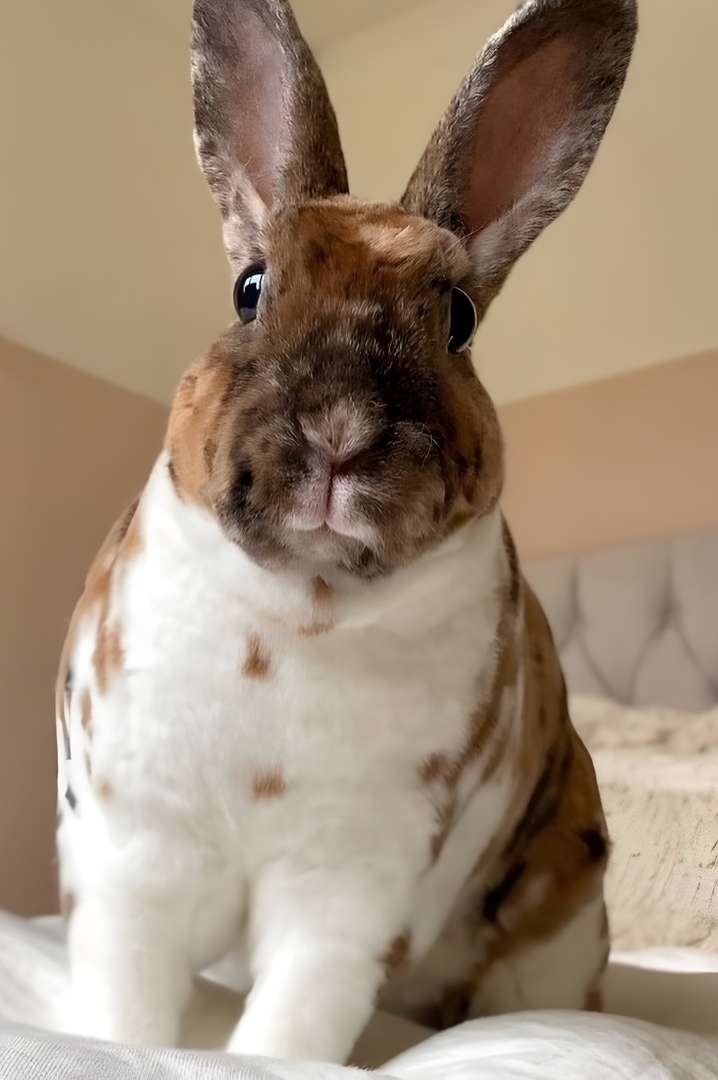 The Mini Rex gained popularity from having a luxurious coat, a well-proportioned bone structure, and a captivating appearance. It seemed to charm the hearts of breeders and pet owners alike due to the dwarf breed’s size and gorgeous physique.

An adult Mini Rex rabbit weighs around three to five pounds. It is important to note that the buck or male rabbit is smaller than the doe or female rabbit.

The breed has a rounded back and well-developed midsection, hindquarters, and shoulders proportional to the rest of the body.

This bunny has a compact body, a head close to the shoulders, an inconspicuous neck, and short, straight legs. One notable feature of the Mini Rex is its thick, erect ears that always seem to be on the lookout for danger.

Whenever you caress the fur of the Mini Rex, you’ll feel a soft, velvety underfur. Its lack of long guard hair and the presence of a same-length short coat makes its fur unique. This breed’s coat is straight, upright, short, and smooth.

Mini Rex rabbits are a crowd favorite in several shows and exhibitions mainly because they come in a wide array of colors. The ARBA recognizes almost 20 colors of this breed which include the following: 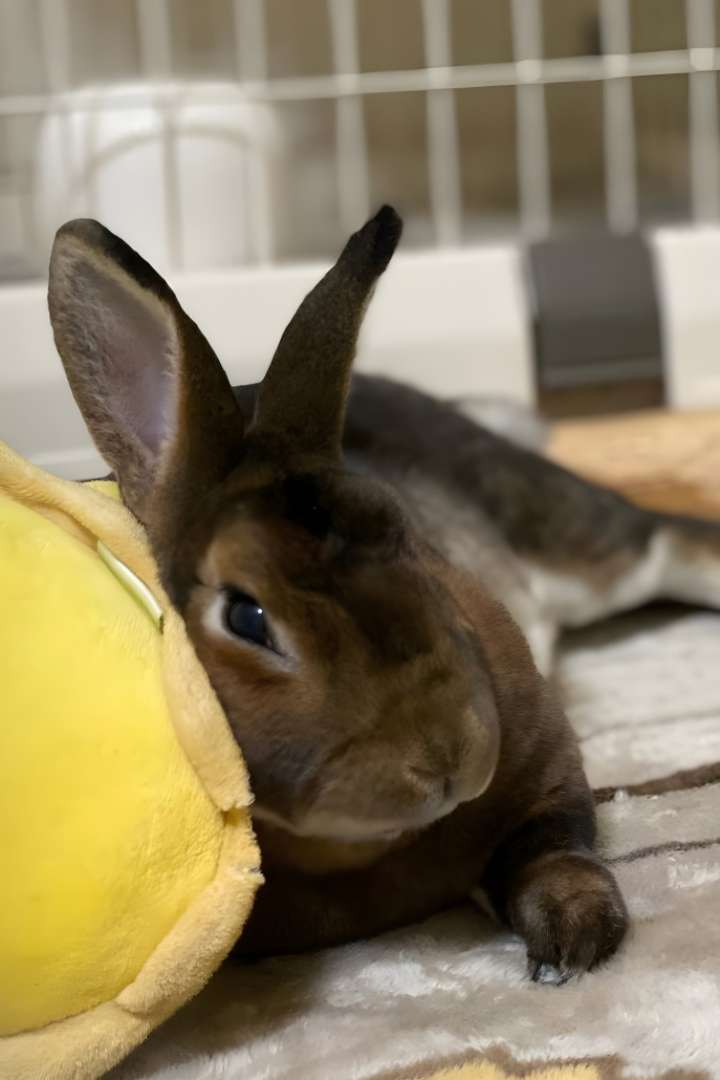 Mini Rex bunnies can be an excellent companion for kids, seniors, new parents, and singles, thanks to their gentle and quiet nature. These docile and motherly creatures thrive in human affection.

You won’t have to think about having other people and rabbits at home since these social creatures love company. They’d quickly bond with whoever feeds and cares for them but will gladly cozy up to anyone willing to show them some love.

The Mini Rex is generally a friendly breed. However, the level of sociability varies per individual. They may enjoy being picked up and cuddled, but rough handling, even if unintentional, may cause them to retaliate.

This sign of aggression is their defense mechanism for getting hurt due to improper handling. They may try to bite when frightened or jolted by sudden movements.

As cute as these bunnies are, they are challenging to train. It would help if you had tons of patience and time to teach them about boundaries and potty training.

However, they quickly make up for their stubbornness by being playful and energetic. Companionship, entertainment, and toys will make them very happy bunnies. 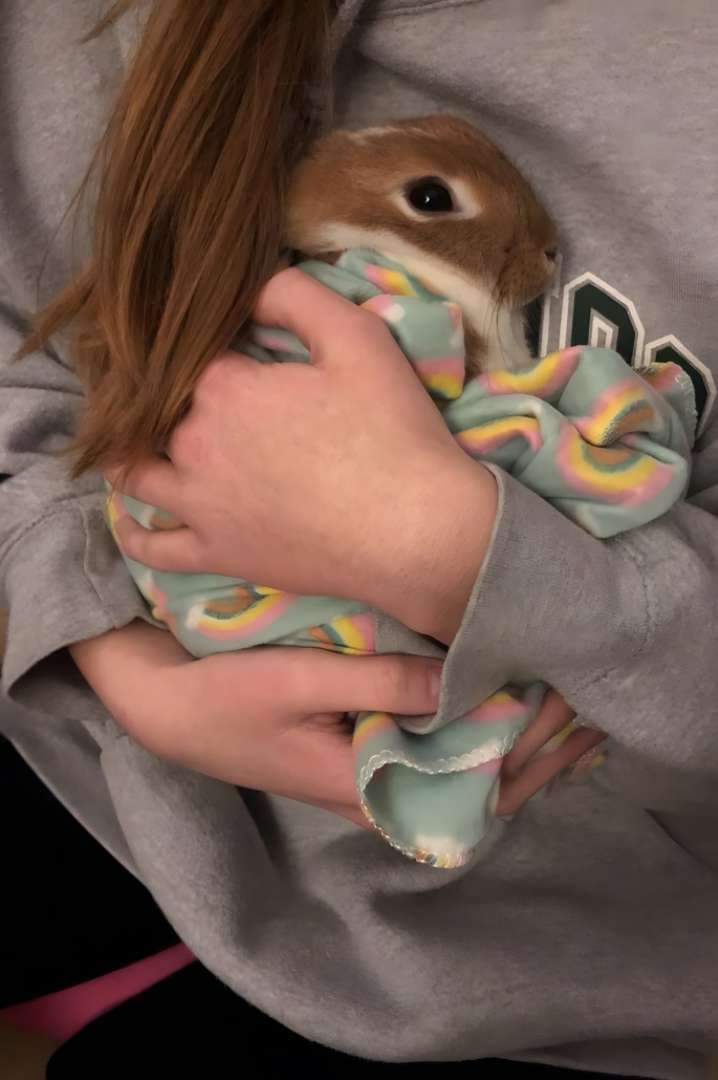 Most of the health concerns of Mini Rex Rabbits are almost the same as other breeds. Some of their conditions stem from their small size.

The following are some of the common illnesses of Mini Rex bunnies:

This potentially fatal health issue is characterized by the slowing or shutting down of the digestive system. The usual symptoms are small or no fecal pellets, lethargy, and poor appetite.

This condition is treatable if caught early on. It would be best to bring your bunny to the vet if you notice any of the mentioned symptoms.

The following are the usual treatments that the veterinarian will give:

This condition happens when the rabbit’s lower and upper teeth are not aligned. Their teeth don’t wear down properly and stick out of the mouth as they grow. This severe condition can lead to inability to eat, severe pain, and jaw infections.

Treatment for this condition includes:

This common rabbit parasite can cause ear disease in your bunnies. The mites’ feces and saliva can inflame the rabbits’ sensitive ear skin. There can be a whopping 10,000 mites in an infected ear that can harm their health.

Treatment for the ear mites includes: 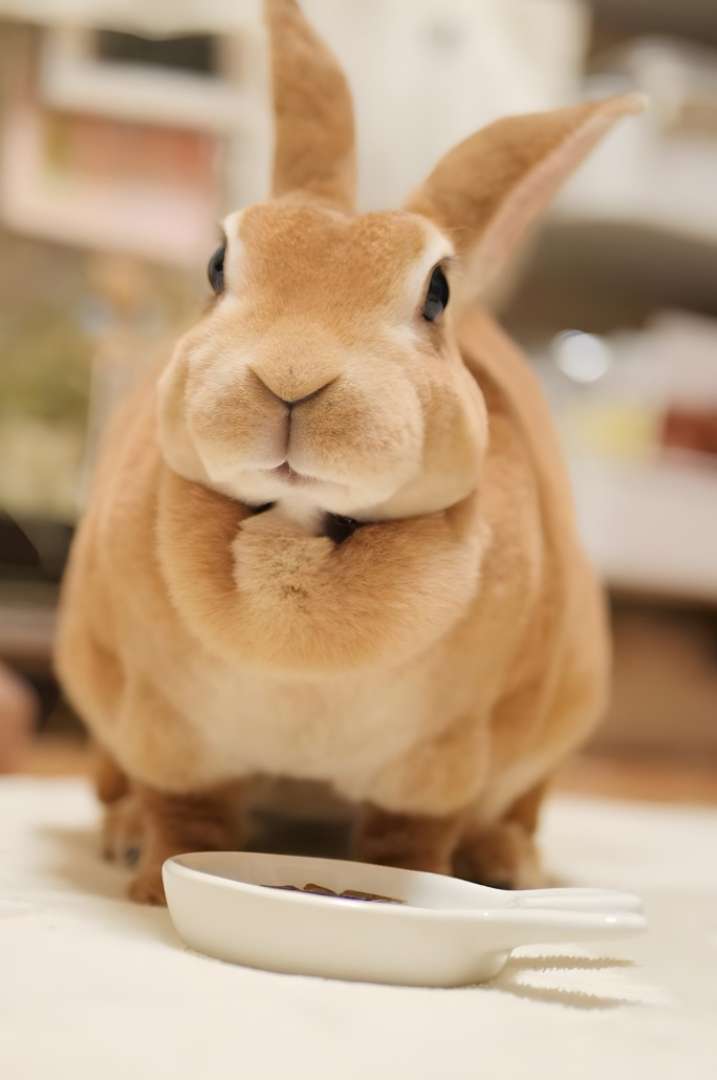 The Mini Rex is also very vulnerable to the cold due to their short coats and small size. It is vital to keep them warm indoors during the winter months. Due to their delicate physique, the bunny can suffer from back issues when they are accidentally dropped or mishandled.

To keep your rabbit in tiptop shape, you need to bring it to the veterinarian for regular checkups. They can cure their diseases if they catch them early on. It would also help if you buy from a reputable rabbit breeder, so you know that you’re getting healthier bunnies.

Care for Your Mini Rex Rabbits

Now that you know a lot about the Mini Rex, it’s time to dive deeper into how to care for these adorable bunnies. You’ll get a glimpse of how to live with these friendly creatures.

It will benefit your Mini Rex rabbit if you give them the amount of food based on their age, size, and activity level. As a rule of thumb, you can provide them with a portion of hay that’s around their body size every day.

Your Mini Rex rabbit’s diet must be composed of 70% hay to ensure the optimal movement of its digestive system. Hay also prevents dental issues since it helps wear down the rabbit’s teeth.

Fresh grass hay options that you can pile in their feeder include oat or timothy hay. Timothy hay has high fiber content and probiotics that can aid in your rabbit’s digestion.

You can supplement the hay with fresh fruits and vegetables such as herbs, radish tops, carrot tops, and lettuce. You have to make sure that they are given only in small amounts, once a day, so your bunny will not lose interest in eating hay.

Place the veggie or fruit treats in a smaller bowl and remove them if your rabbit did not eat them after a few hours. Spoiled food can cause an upset stomach or diarrhea. Ask your vet for the appropriate amount of fruits and vegetables based on your rabbit’s activity level and size.

You can provide a small amount of store-bought pellets to your rabbit once every day. High-quality commercial feeds can help provide your bunnies with additional vitamins and minerals to keep them strong and healthy.

Please make sure you give the right amount since overfeeding can cause obesity and digestive problems. A veterinarian can prescribe the best amount for your rabbit.

You may place the pellets in a separate bowl. After 24 hours, dispose of any uneaten pellets before adding a new batch. This practice can prevent contamination which often leads to other health issues.

Other Basic Needs of the Mini Rex Rabbit 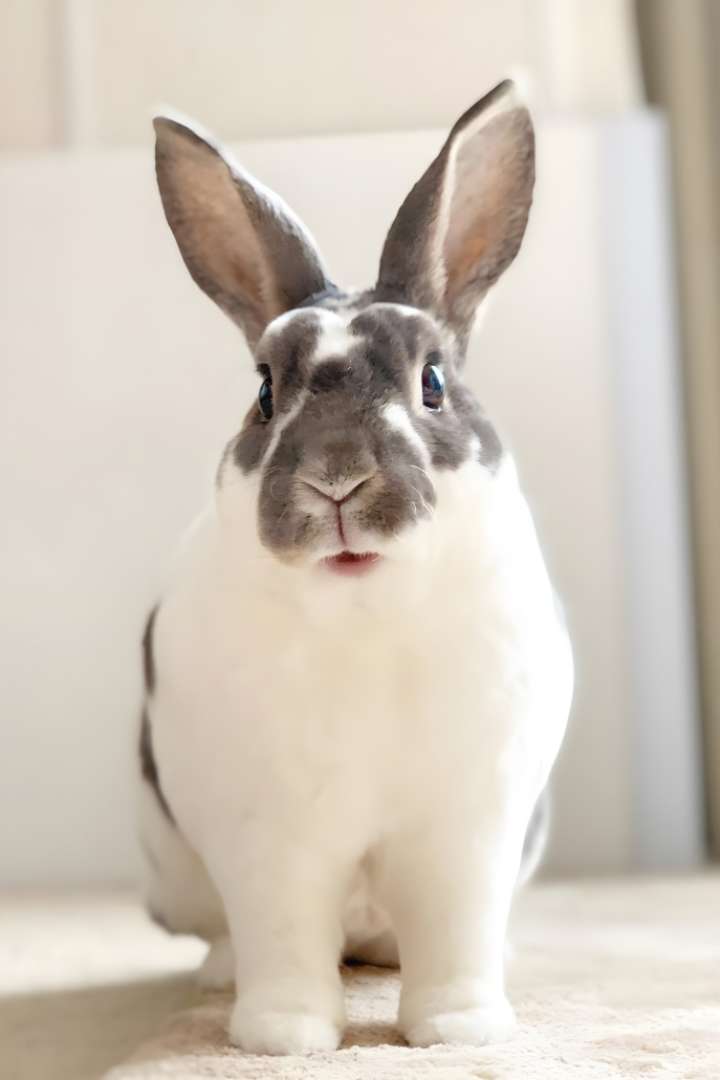 Fill your rabbit’s bowl with fresh, clean water every day. A water dish or a bottle with a nozzle will work perfectly fine to keep your bunny hydrated. Just make sure that your rabbit already knows how to drink from a bottle before removing its water dish.

A Mini Rex rabbit’s fur is not as thick as other breeds, so they are more likely to suffer from the cold. It will help if you keep them indoors most of the time, especially if you live in a place with a cold climate.

Leaving your bunny outside can make it vulnerable to predatory animals, so keeping it as a house pet would be safer.

This breed does not need considerable space due to its size, but they require a large hutch to accommodate its activities. Ensure that the hutch doesn’t have wire flooring since they lead to sore hocks. An enclosure with solid flooring such as plywood can be a safer alternative.

You may create your rabbit’s bedding from shredded paper or cardboard, dry straw or hay, or wood pellets. Keeping their beddings clean and dry is essential to prevent your rabbit from having pododermatitis or hind leg sores.

Maintaining your Mini Rex rabbit’s hygiene is pretty straightforward since they can groom themselves. However, you or a groomer should trim their nails occasionally.

You also need to cut their hair to prevent them from ingesting it. Unlike cats, bunnies can’t expel their hairball, so a big chunk of fur can be in their GI tract.

Check out this video on how to groom your rabbits.

Rabbits in the wild run for almost three miles daily, so it’s essential to give your Mini Rex bunnies enough physical activity to keep them healthy. It’s best to provide them with about three hours of playtime around the house or in the garden.

Exercise is a crucial part of a rabbit’s wellbeing. Not only does it keep it entertained, but it also keeps its joints moving.

Having a Mini Rex rabbit is like having an adorable daily companion. Their velvety fur and beautiful physique are traits any owner can be proud of.

Their sweet and loving nature makes them great pets for children, seniors, and first-time parents. Their upkeep and needs are pretty simple, so for sure, you’ll be in for a joyful treat.