With its title, it comes as no surprise that many are seeking to see or know more about this rabbit. Well, allow us to help you with that, and let us get to know the Sumatran striped rabbit today. 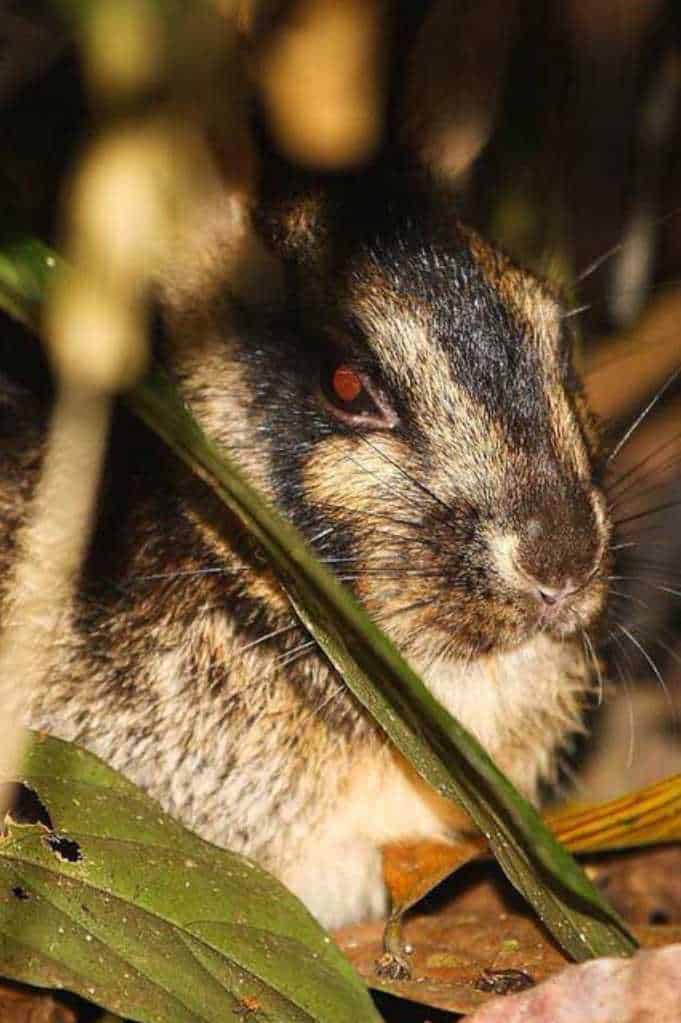 Before we start, let us have a brief overview of the Sumatran striped rabbit.

We have now touched the surface. However, there is still so much more to know about this rabbit. Let us go ahead and get to know it better, starting with its background and history.

B. Background and History of the Sumatran Striped Rabbit

As we have said above, the Sumatran striped rabbit is a rare rabbit. It is hardly ever seen, much more, studied. We have very little knowledge about this rabbit today. We do not know even know much about its history. Still, there are things we do know.

For one, there is a reason to believe that this rabbit has existed for millions of years already. It seems it is not until the late 1800s that it was found and acknowledged, though.

For some time, it was the only species in the Nesolagus genus. That is until its relative, the Annamite striped rabbit, was found.

That is not all the wrong inference we humans have made about this rabbit. For many years, the belief was we already failed; that this rabbit has already gone extinct. However, a camera trap caught a photo of it in the late 1900s proving otherwise.

Sadly, since the news broke out that this rabbit has not yet gone extinct, we still have not done much to help, or at the very least, get to know these furry friends more. We are already in the 2000s, but we still do not know much about these rabbits.

There are already more efforts being made today for this rabbit. For one, IUCN has classified it as Critically Endangered. We will talk more about this in a later portion. However, you can say that it is a start. Still, as you can see, these furry friends still need more attention and help.

C. Breed Standard and Appearance of the Sumatran Striped Rabbit 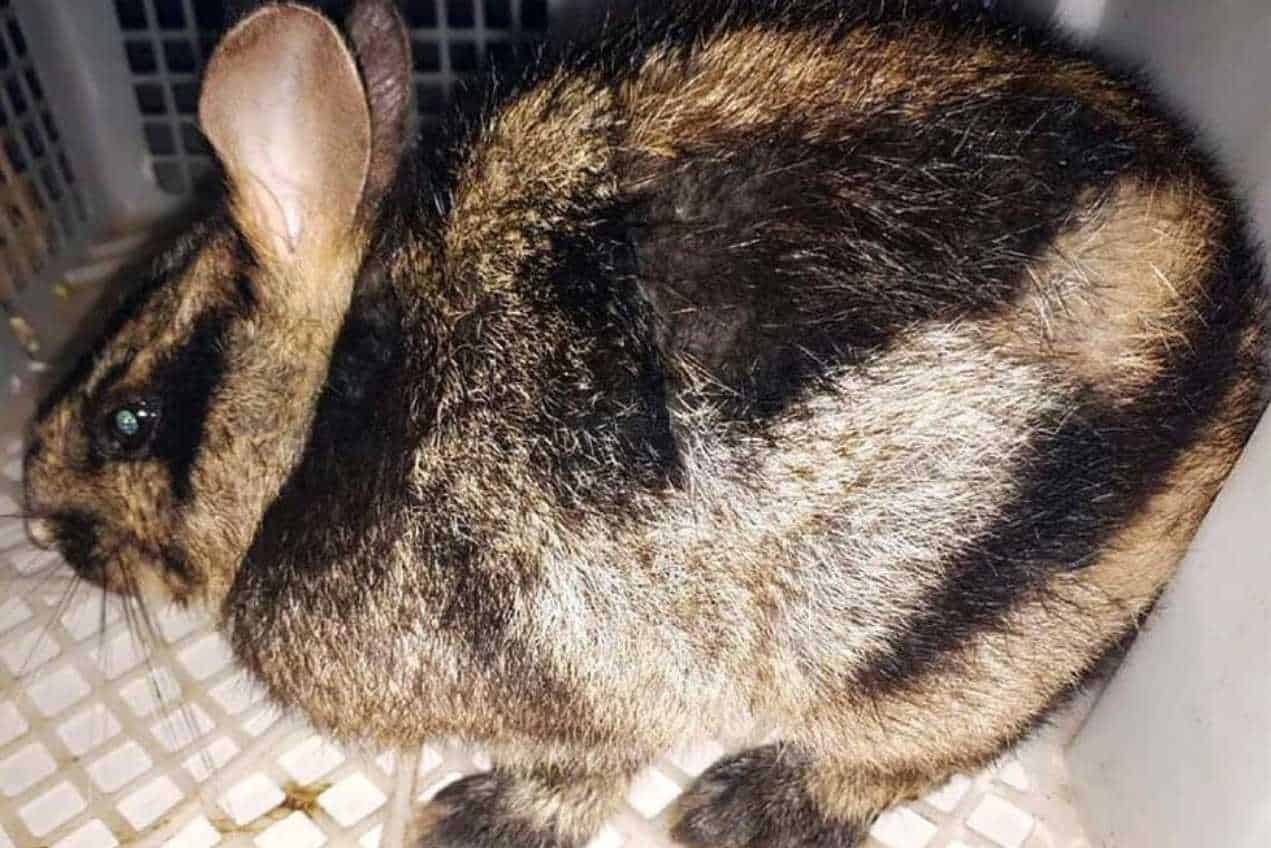 There are many things we do not know about this rabbit. However, we do have a good idea of how it looks.

The coat of this rabbit is a mix of the different shades of blacks, browns, pale yellows, and whites. Of course, we cannot forget to mention that its head and body has stripes all over. These stipes are often between the shades of black to a dark brown hue.

These rabbits are small to average in size. In addition to that, they have small ears and a short tail.

With this rabbit’s coat, size, and small body parts? It should not be surprising that this rabbit can easily blend with its surroundings. Undoubtedly, one of the reasons why this rabbit has been and continues to be successful at being elusive.

D. Personality and Temperament of the Sumatran Striped Rabbit 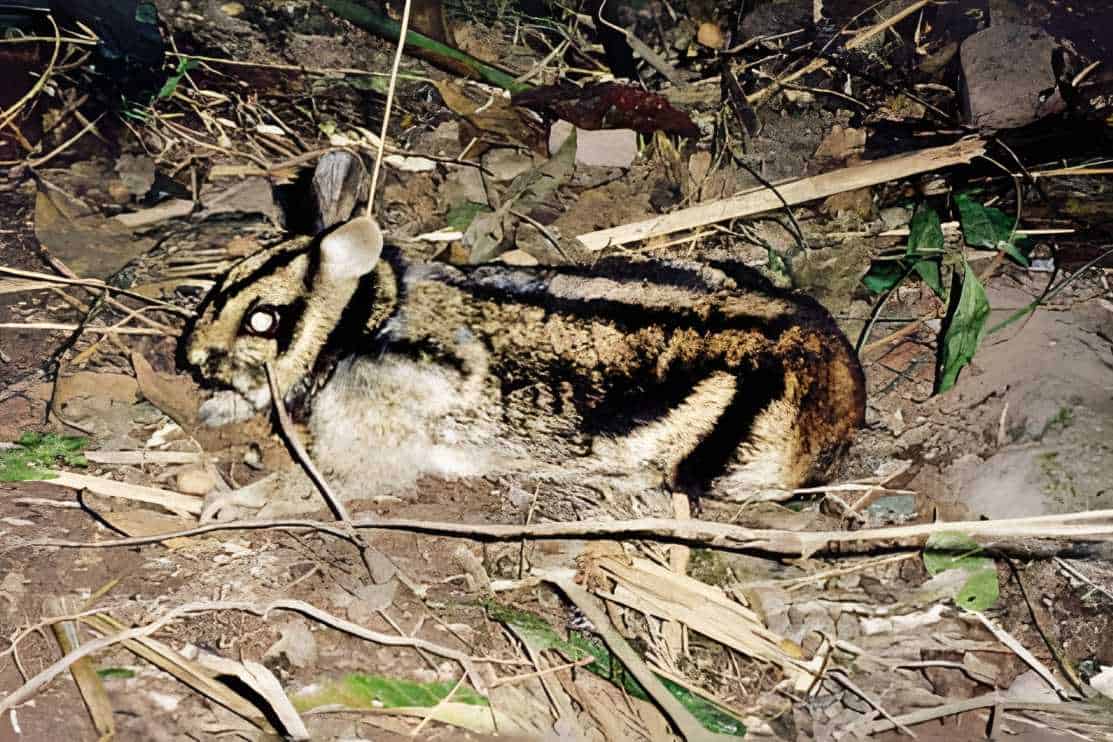 The personality and temperament of this rabbit is another murky area. That is because we have not had many interactions with this rabbit. Many of the sightings and spottings of this rabbit are thanks to camera traps. As you can see, we do not really have much to go with to have a good idea of their behavior.

We may not have a clear picture of the personality or temperament of this rabbit, but we do have an idea.

We do not have sufficient evidence, but they have been said to be shy critters. They do not seem to be the anxious shy types, though.

If you are trying to keep up with the news about these rabbits, you might have heard that a farmer has once tried to sell a Sumatran striped rabbit on Facebook. (Although, allow us to clear that the farmer did not seem to know he was selling an endangered and priceless rabbit.)

However, an anonymous tipster alerted the authorities, and fortunately, the rabbit got rescued. In its release, it did not immediately run away. It was not clear whether the rescuers were around when it was released.

However, according to the news, the rabbit looked around and proceeded to eat. Either way, it seems sufficient evidence, for now, to conclude this rabbit is a lot calmer than other breeds.

With the very little information we have, for now, it seems alright to assume the Sumatran striped rabbit is a shy but relaxed rabbit.

E. Health and Health Issues of the Sumatran Striped Rabbit

F. The Sumatran Striped Rabbit’s Life in the Wild 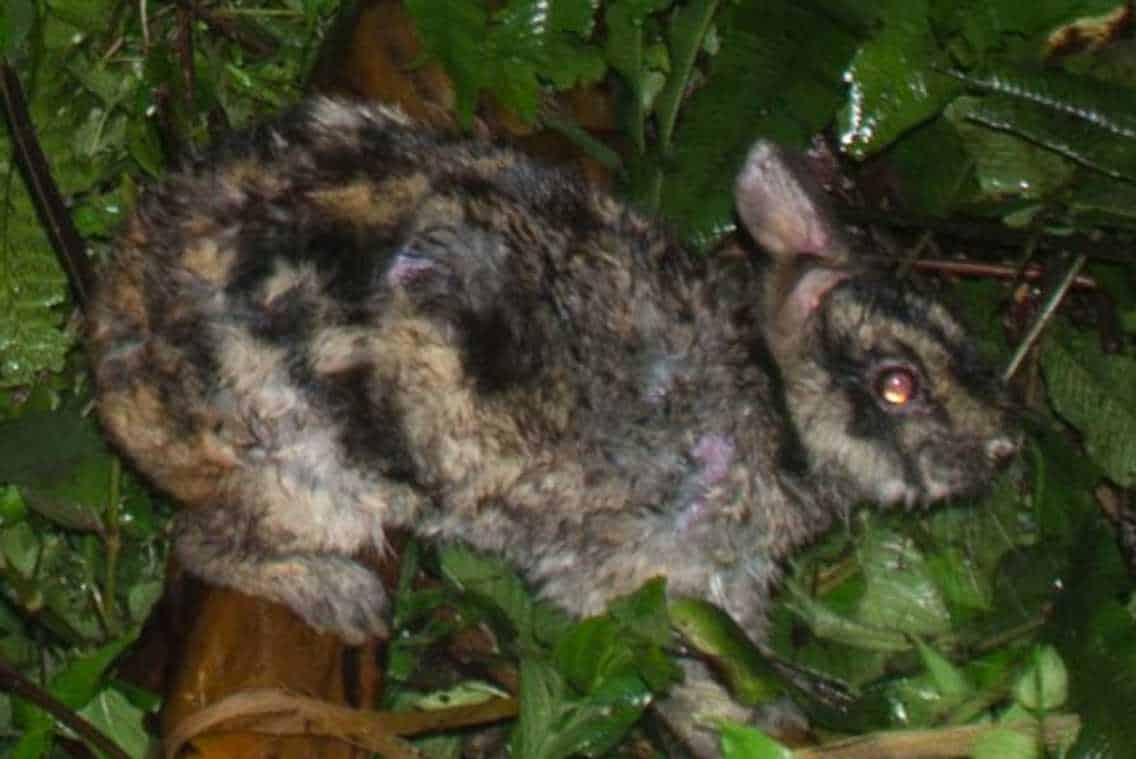 We may still not know much, but we are already scratching the surface. What we used to believe as facts about this rabbit are now questions. While that means we are going back, it is good. After all, uncovering the truth is much better than having false facts.

Here, allow us to give you an idea. The belief before was that this rabbit is nocturnal. However, there is now some evidence showing this rabbit is also active during the day.

For another, they have usually been found in high places before. The belief has been that they can only be found on high grounds. However, recently, they have also been found in much lower elevations than before. 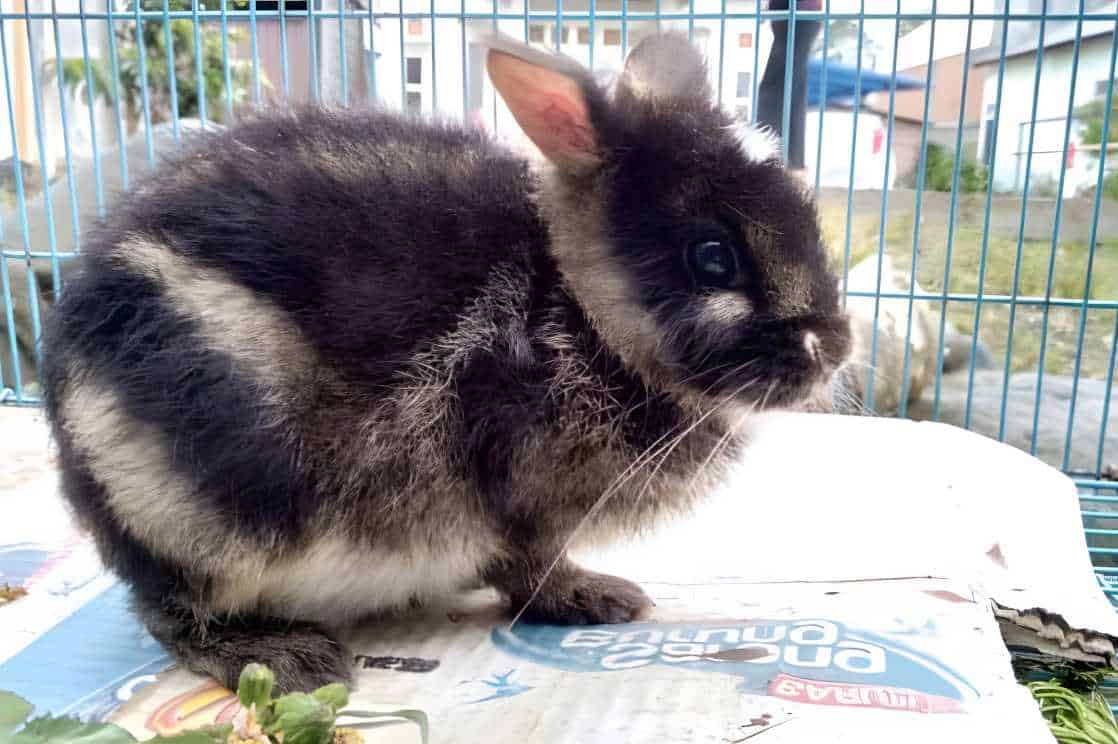 As we have said above, yes, this rabbit has been labeled as critically endangered by the IUCN. Additionally, at some point, it was even believed to be extinct until a camera trap was able to take a photo of it.

It is already regretful that these lovely critters are going extinct. However, what might be more saddening is that the effort to conserve these rabbits are close to none.

There might not be any widely-known efforts to help conserve these rabbits, but there is still a way for us to help them. Let us talk about that next. 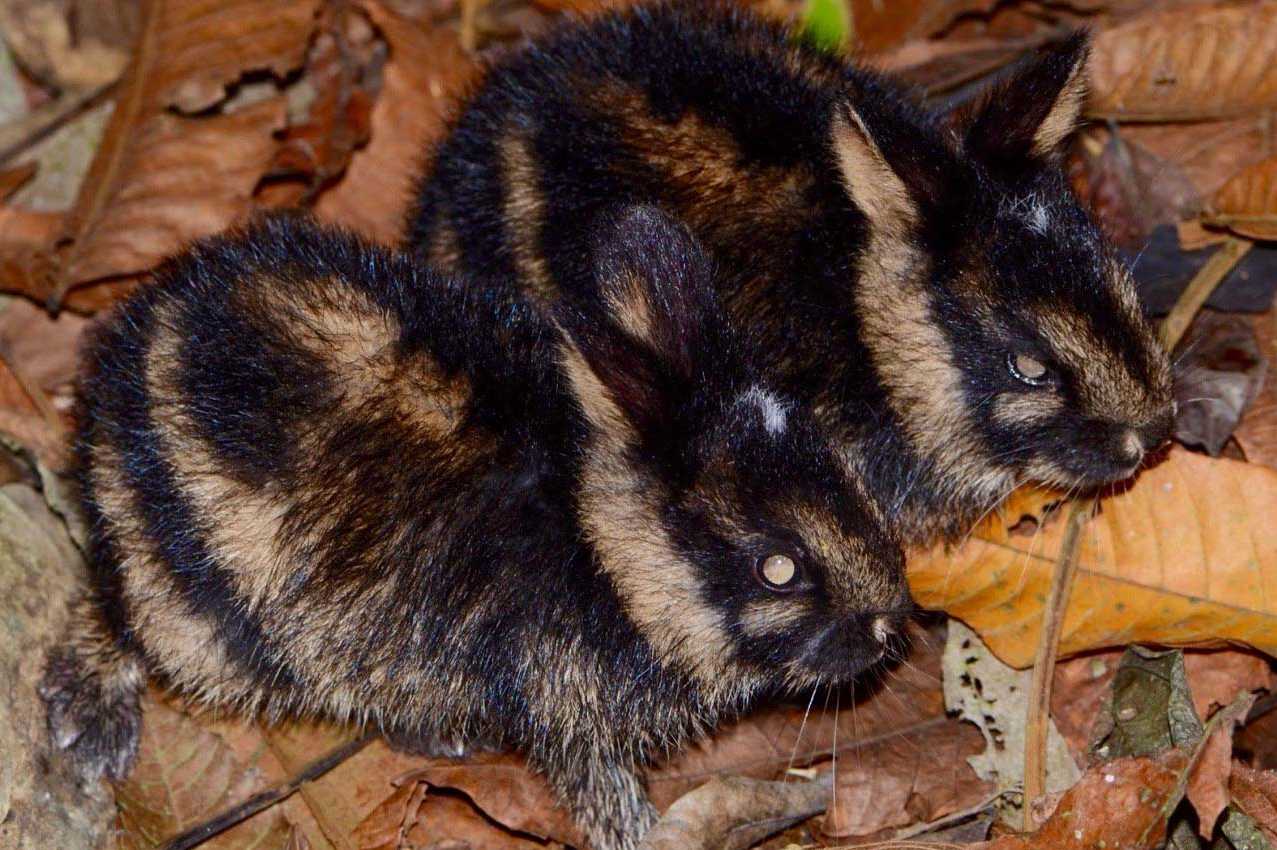 As you might know by now, we cannot take this beautiful rabbit home. Still, that does not mean there is nothing we can do to help and care for the Sumatran striped rabbit.

As we have said, the biggest threat to the number of these rabbits is the destruction of their home. With that, avoiding deforestation is probably the best solution. After all, prevention is better than cure.

However, there is not much we can do about this part. We could join efforts to stop it. Write to proper authorities, sign petitions, and all that. Still, we have to admit that often, these things do not do much.

The second best thing then might be to join reforestation efforts in the known homes of these rabbits. Maybe even start one of your own if you could!

On the other hand, we do not all have the resources to join efforts like those mentioned above. In that case, donating is another thing one could do to help in saving these rabbits. Funding is something lacking in the study of these beauties, after all.

Know What Products to Avoid

Finally, while it is a small act, you might also want to avoid products connected to deforestation in Indonesia. This way, we could tell them in our little way that we are not for what they are doing.

Getting to Know the Sumatran Striped Rabbit Better

By being here and trying to get to know these rabbits better, you are already on your way to helping. As you might have already noticed, one of the main problems with helping these rabbits is that we do not even know much about them in the first place.

Again, let us go back to the Sumatran striped rabbit that almost got sold off on Facebook.

While we are happy that the rabbit got rescued, proper knowledge could have prevented it. The locals, or those nearest this rabbit, do not even have a name for it. Some do not even know this rabbit exists or how rare it is. As you can see, compared to other breeds, knowledge, and spreading of knowledge about these rabbits are very lacking.

Another problem was that the rescuers had trouble figuring out where to release the rabbit. If we are to go with the news, the only basis as to where to let the rabbit out was camera trap data. These are only some examples. There are many more.

Knowing and funding research and studies about this rabbit is undoubtedly needed if we want to keep these rabbits from going extinct.

To the best that we could, we have let you in on the basics of the Sumatran striped rabbit. Before you go, here are some other interesting facts about this rabbit.

As we have been saying, this rabbit is the rarest among the rabbits. If you decide to do some further research, you might notice how strictly monitored its sightings are. You do not often get to see this kind of strictness. However, given the rarity of this rabbit, it is understandable and should really not come as a surprise.

Phantom of the Rabbit World

As we have said above, these rabbits are something of a phantom or legend. We are not entirely sure if it is for the good or for the bad, but these rabbits have been able and continue to be able to keep out of the radar for most of the time.

As you might already know, most of their sightings were not even in the presence of humans! We have camera traps to thank for much of the data on these rabbits.

For many years, researchers have shied away from studying this beautiful creature. There are several speculations why. However, there does not seem to be a definitive answer to why. Partly, though, the long belief that they were already extinct is likely one of the reasons any efforts – if there were any – got halted before.

There you have it! The ABCs of the Sumatran striped rabbit! It is no secret that there is still very little information about this rabbit. Still, slowly but surely, efforts are being made to get to know them better. Hopefully, we are not far from knowing how we could best help these rabbits.

We might not have all the answers now, as Science does not know much about this rabbit yet. However, we hope we were able to help you get to know the Sumatran striped rabbit a little bit better. If there is any other rabbit you would like to get to know better, you might want to check out our other buzzing bunny talks!