All rabbit breeds are one of a kind, and the Dutch Rabbit is no exception. From their gentle and friendly demeanor to their impressive breed history, we will make sure to tell you all that there is to know about this specific breed. Continue reading to find out more. 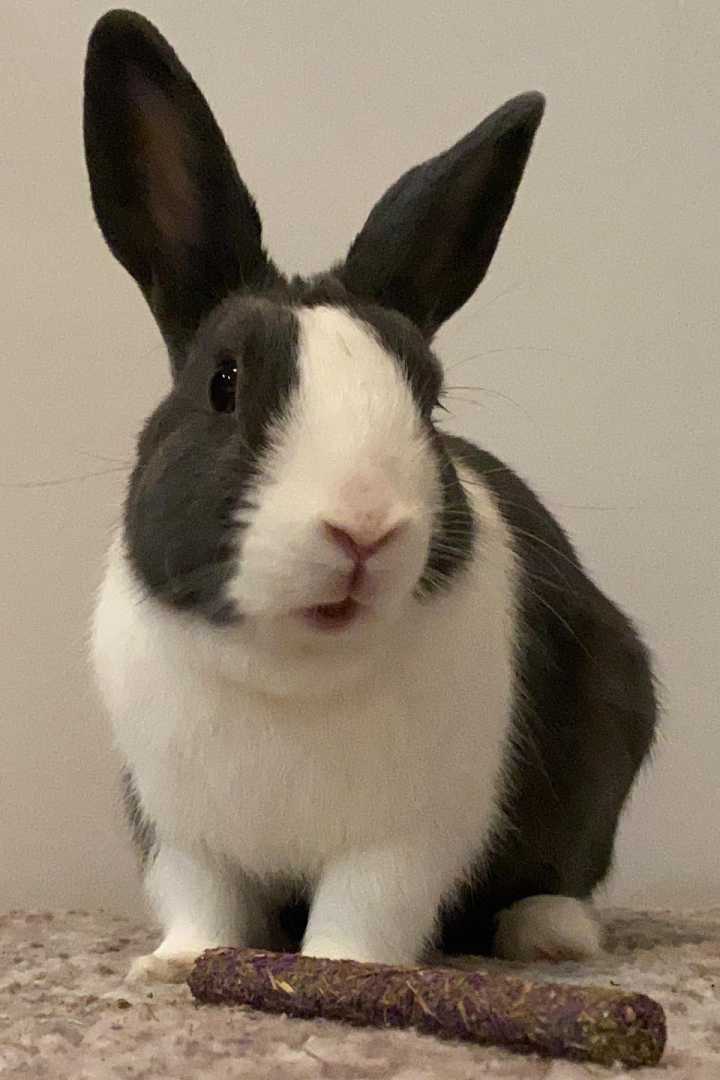 To get started on this informative article on Dutch rabbits, it’s essential to know some of the basic information about a Dutch Rabbit. This informative chart can tell you the simplest things, such as average weight and length.

We would also give you some information on how to differentiate a Dutch Rabbit from other breeds. If you want to know more about this breed, you may also check out the video below.

While they are called Dutch Rabbit, their origin has become one of the most unsure things. Some say that they originated from the Netherlands, while others came from England. Continue reading to find out why.

In the year 1830, most rabbits were popularly bred for meat production. That’s why many rabbits were imported all the way from Belgium to England.

One of the breeds that were imported for meat is the Petit Brabançon. This breed originated from the Province of Brabant, located in the northern part of Belgium and formerly a part of the United Kingdom of Netherlands.

If you were to look at paintings from the fifteenth century, you might be able to spot a Petit Brabançon easily. They have the same marks as an ordinary Dutch rabbit has.

The Dutch rabbit was first introduced in England in the year 1864. They are considered one of the first breeds ever recognized by the National Pet Stock Association in 1910.

This organization, later on, became the American Rabbit Breeders Association in 1952. The name Dutch rabbit was first mentioned in 1835, and the first written description was made in 1865. 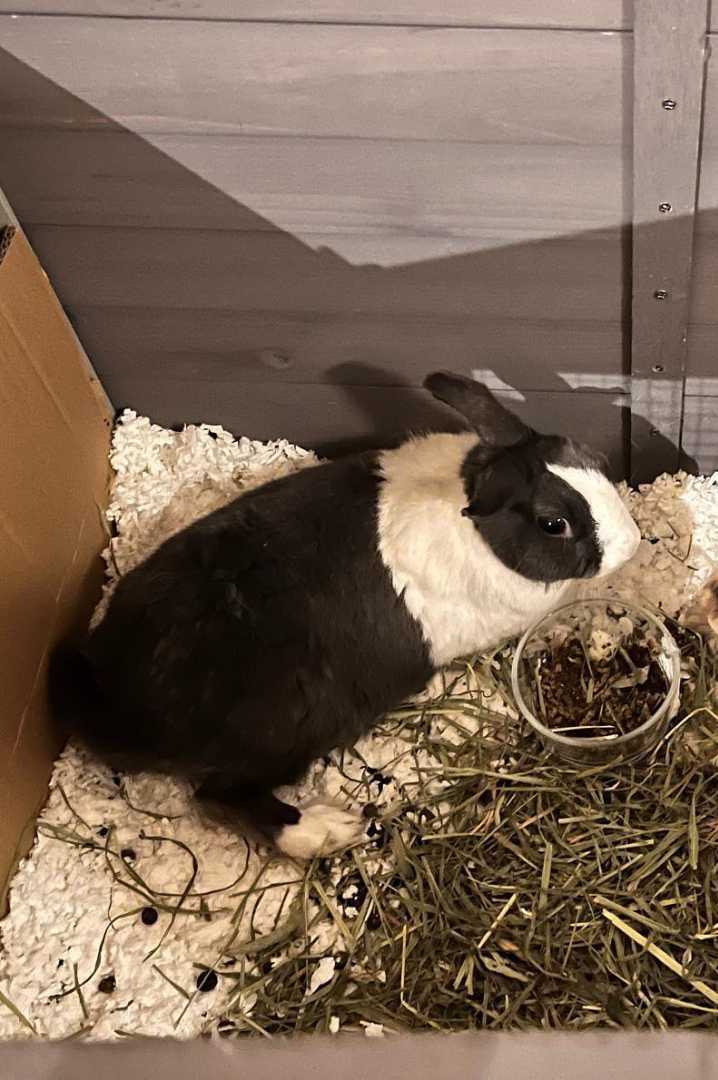 In a group of rabbits with different breeds, you can definitely pinpoint a Dutch rabbit at first glance. They are popularly known and identifiable by their color and markings.

In general, a Dutch rabbit would weigh from 1.5 to 2.5 kilograms or 3.5 to 5.5 lbs. Most of them are small in size but not small enough to be considered a dwarf rabbit breed.

Dutch rabbits have longer hind legs than their front legs, and they are generally more robust and more powerful.

They have a well-rounded body that is very compact and short ears. Another thing is that they have flyback fur, so if you brush their coat in the opposite direction, it will just bounce back to its usual place.

When it comes to color, there are seven different color varieties for Dutch rabbits that are recognized by the American Rabbit Breeders Association (ARBA).

Although the Dutch rabbit may come in different color varieties, they would always have the same markings on their body that helps identify the breed.

Most of the time, their colors mix white and one of the standard colors. Their ears would be covered with the dark color until the area of both of their eyes.

The white color will start from a point on top of their head and down to their nose and throughout their upper body.

The lower part of their torso, including their legs, will be covered with the same dark color on their heads. There will be a defined line on their fur at the middle part of their body. 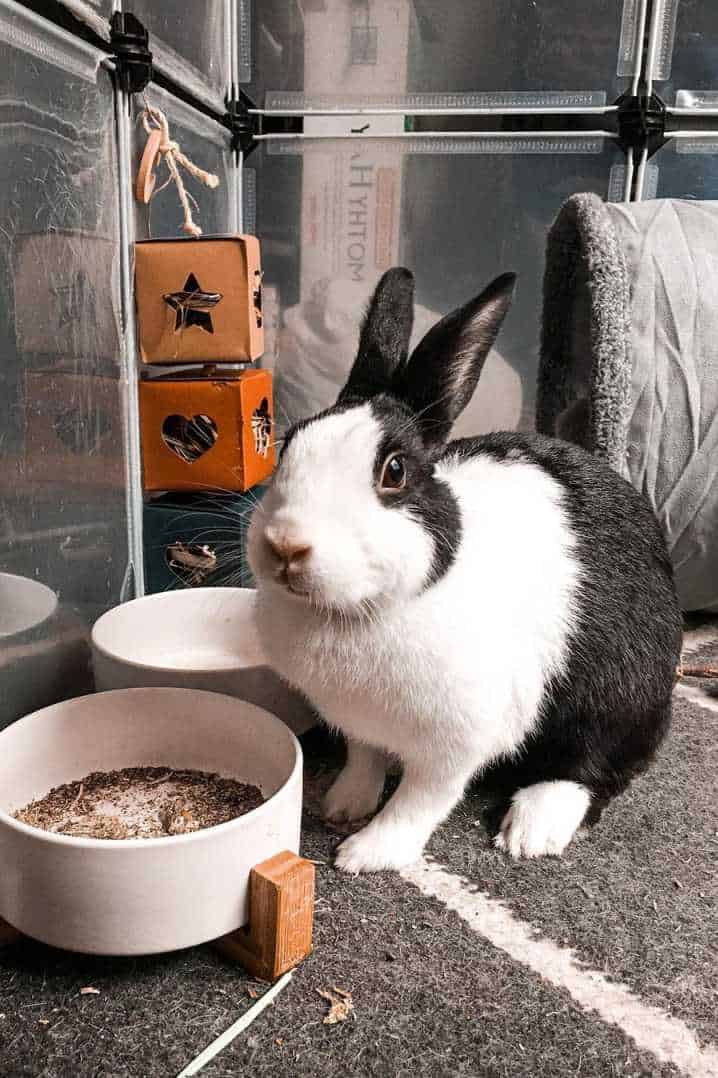 Now that you know about their history and background and can quickly identify them in a crowd of rabbits, it’s time that you get to know a Dutch rabbit’s personality and temperament.

In general, a Dutch rabbit is, without a doubt, the best rabbit breed for pet owners. They’re very sociable, which will work well for beginners and those with children. If you want a more in-depth explanation of their personality, check it out below. 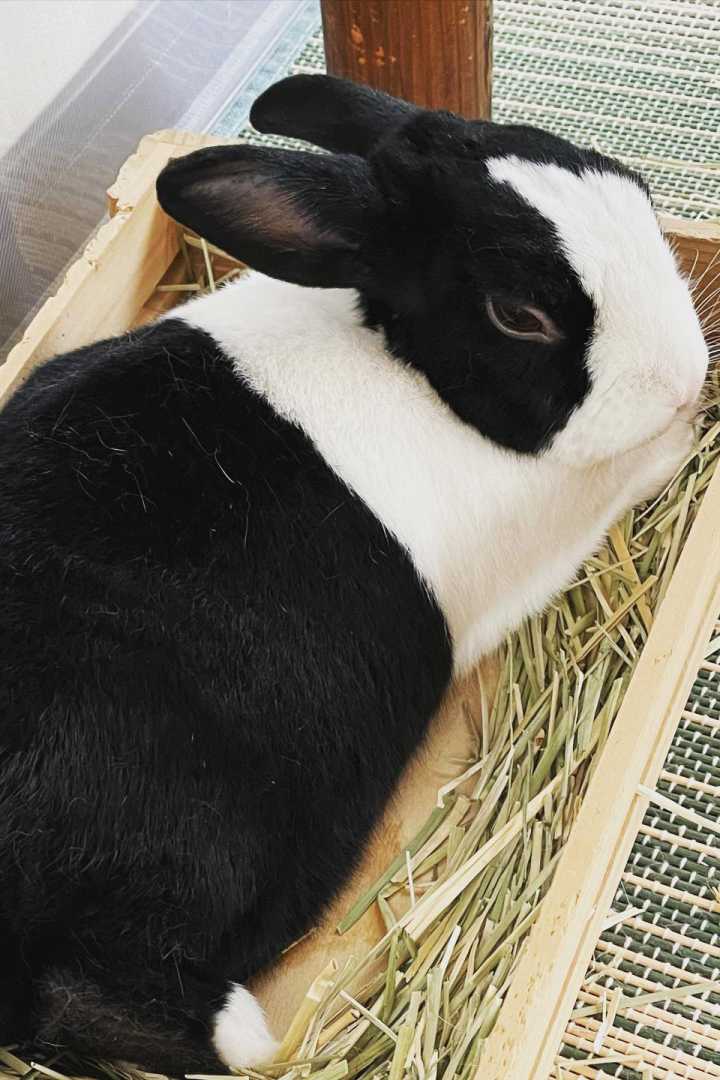 Dutch rabbits are considered low-maintenance pets. They don’t need too much supervision care, and if well taken care of, they can live for about five to ten years.

Just make sure that they have a healthy diet and a clean and healthy environment, plus regular vet check-ups, and your rabbits will undoubtedly be at the top of their game.

One of the things that you should always take note of with your rabbit is room temperature. If you are feeling hot, chances are that your rabbit is feeling the same.

Do not keep them in a room that’s hotter than 70 degrees Fahrenheit. Always check on your rabbits from time to time to avoid heat strokes and make sure that their water is always full during the summer.

When it comes to breeding, Dutch rabbits are not too picky. However, it’s essential to be vigilant whenever they mate since you wouldn’t want a full cage by the end of the month. Dutch rabbits are very common, so you won’t always find a new home for baby rabbits. 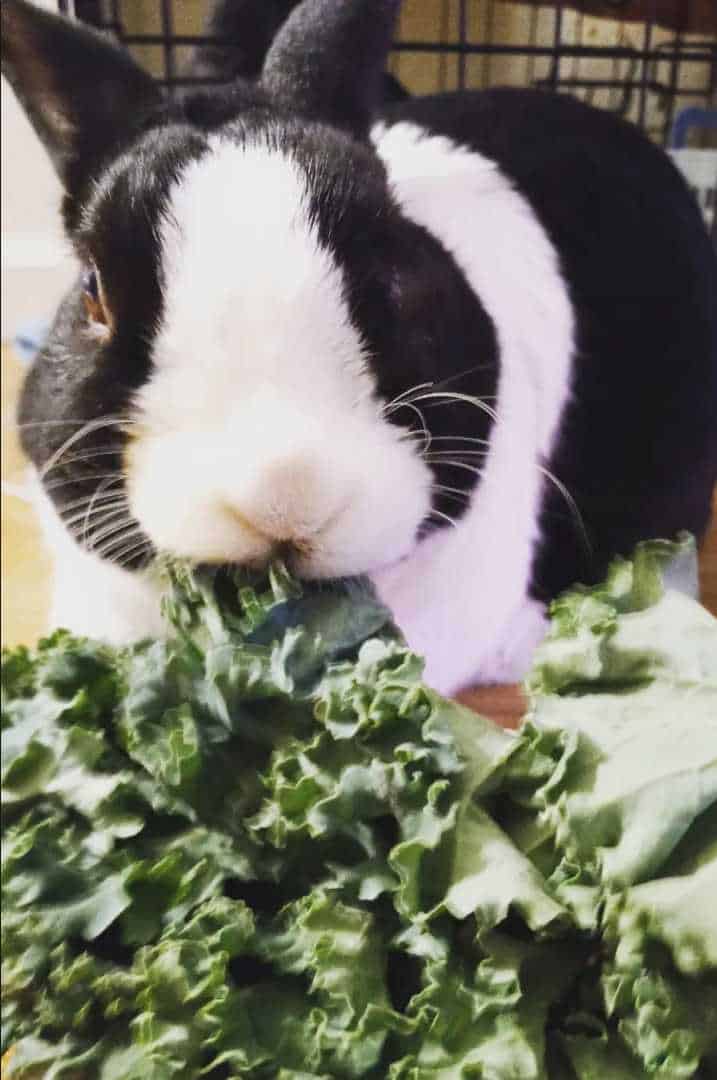 After knowing all the general information about the Dutch rabbit, this section will tell you everything you need to know about their diet. Giving your rabbits healthy food and a balanced diet is key to having healthy rabbits throughout their lifespan. Read below to learn more.

For any rabbit breed, it is essential to give them a healthy diet that mainly consists of 70% hay. The most common way to feed rabbits is the Timothy grass hay.

If you ever plan on adding other food to their meal, make sure you give them 70% hay since this will provide them with the necessary fiber that they need.

Of course, another healthy food that you can give to your rabbits is vegetables. Since a rabbit’s diet primarily consists of hay, you can spice things up by adding leafy greens to their meals.

Do not add too many vegetables with high water content, and go for ones with more fiber. Vegetables shouldn’t be served as their regular meal, but rather a snack or a mix of their regular hay. 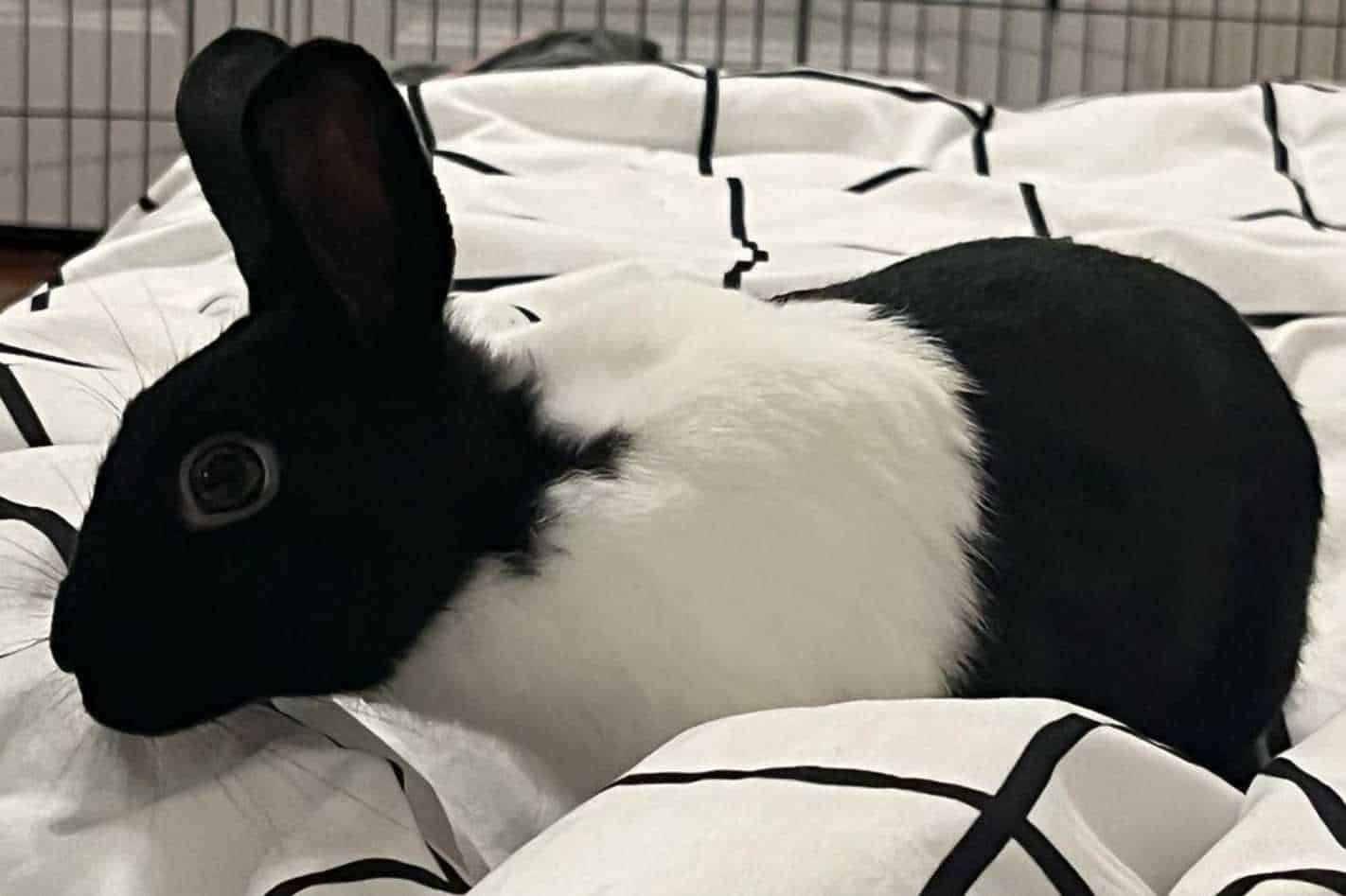 Every rabbit breed differs from one another, so there are different health problems for them. With thorough research, you can prepare yourself for some troubles ahead. To help make things easier for you, here are some of the most common health problems for a Dutch Rabbit.

Parasites are very common with all rabbit breeds. The most common ones for Dutch rabbits are E cuniculi parasite and Cheyletiella mites.

The E cuniculi parasite is harder to fight off since it can be passed on to other rabbits through spores on their urine. On the other hand, the Cheyletiella mites are easier to combat since they can be removed using anti-mite treatments.

The most common health problems you will encounter with any rabbit breed are respiratory tract disorders. One of the reasons is because of their tiny lungs. Their sinuses are placed above their upper teeth, so if they have problems in this area, their sinuses will get affected too.

Some of the respiratory tract diseases that rabbits may get include Pasteurella infection, coughing, snuffles, rapid breathing, or runny nose. Luckily, most of these health problems can be treated with the right antibiotics and care. Just make sure that you catch it before it gets worse.

Rabbits’ teeth don’t stop growing; that’s why they are prone to dental diseases. For Dutch rabbits, this problem is worse because they have smaller heads.

They also have longer jaws than others, so occasionally, misalignment issues can happen. Most of the time, they will also have problems with uneven teeth, in which some are longer than others.

You bring them to a vet regularly to keep dental issues at bay. Their teeth can be made even under anesthesia to avoid further problems.

Rabbits have sensitive digestive tracts, a common source of an ailment. Fiber is the main component that helps make sure that they work perfectly.

Still, suppose a rabbit has dental problems or any illness. In that case, they may lose appetite, hindering them from eating lots of fiber and causing some disorders. 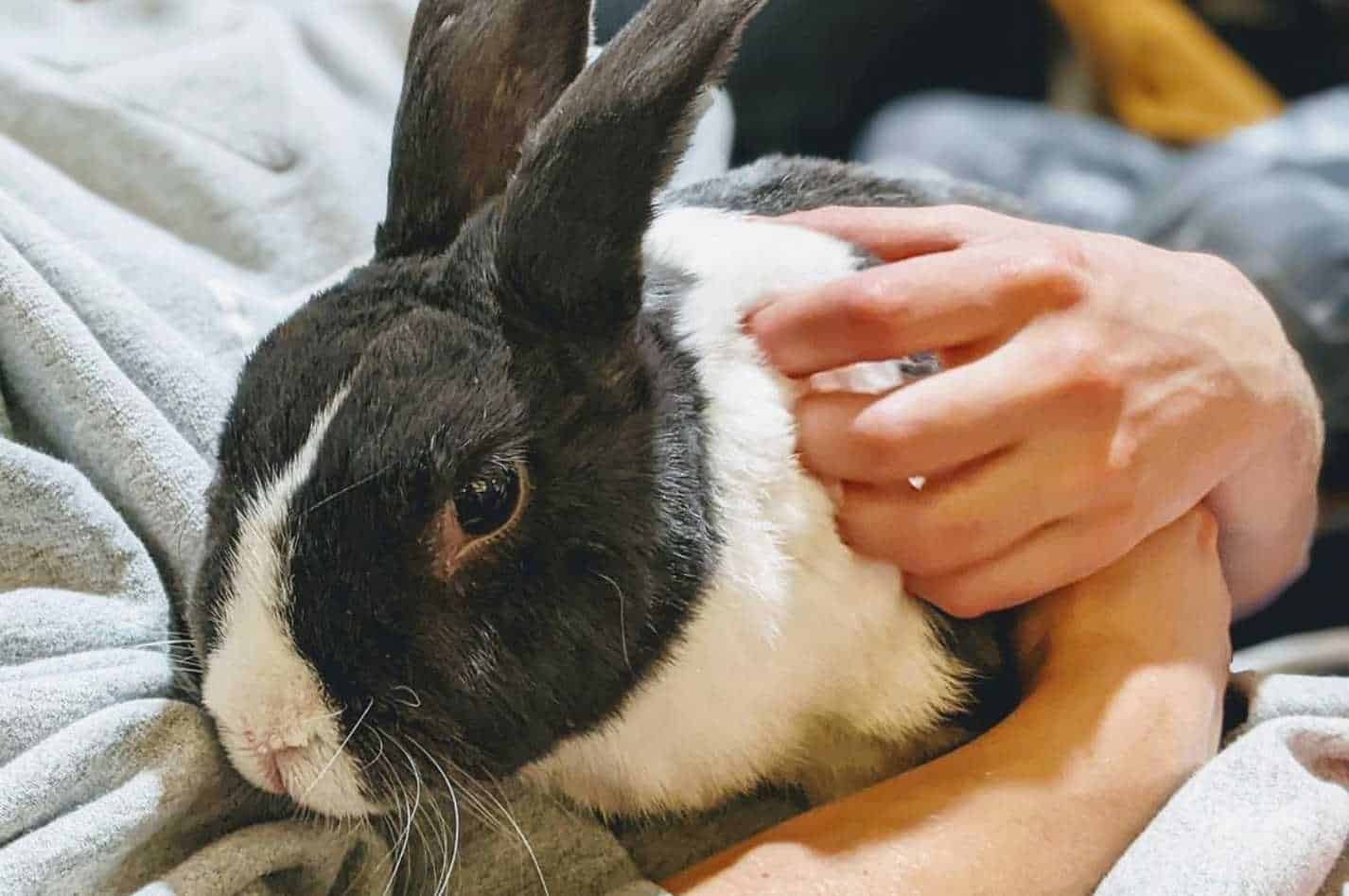 Now that you basically know everything there is to find out about Dutch rabbits, you may be confident in adopting and raising one. However, you need to keep in mind that there are some things that you should consider on how to care for them.

The shelter is one of them and also grooming. It’s better to know about these things in advance so that you can be prepared for when the time comes. To help you get ready, here are some vital care facts for a Dutch rabbit.

Like every other rabbit breed, you need to keep an eye on their grooming. Dutch rabbits are low maintenance, so they don’t actually require too much grooming in the first place.

All you need to do is brush their fur regularly to ensure that their hair grows nicely and without any problem.

On average, the Dutch rabbit will weigh over 4 pounds and 5.5 pounds at maximum. They are a small to medium-sized breed, so you won’t need too large of a cage to keep them safe.

Find a cage that is two feet wide, two feet high, and two feet long so that your Dutch rabbit can have enough space to roam around freely.

However, suppose you have more space and budget. In that case, you may want to get the most giant cage you can get for maximum comfortability.

When it comes to shelter and cages, you also need to consider the cage’s floors. Normal cells will have wire bottoms, and while they are a great choice since your rabbit’s waste can fall off through the holes and into a catch tray, the wires may be too hard for a rabbit to walk on.

You can also go for soft bedding, which will improve the cage’s comfortability. Still, you need a more regular change of bedding since your rabbit’s waste won’t be collected easily.

Taking care of a Dutch rabbit requires a lot of knowledge about the breed and its types. The information we provided above will help you know what your rabbit needs and how you can give the best care for them. We hope you learned a lot here.