Having pets is equal to responsibility, but it’s worth it for pet owners.

Having long-haired rabbits may be more challenging in grooming, but these rabbit breeds will surely steal your heart with their adorable looks and personality. If you are planning on having one, here are eight long-haired rabbits. 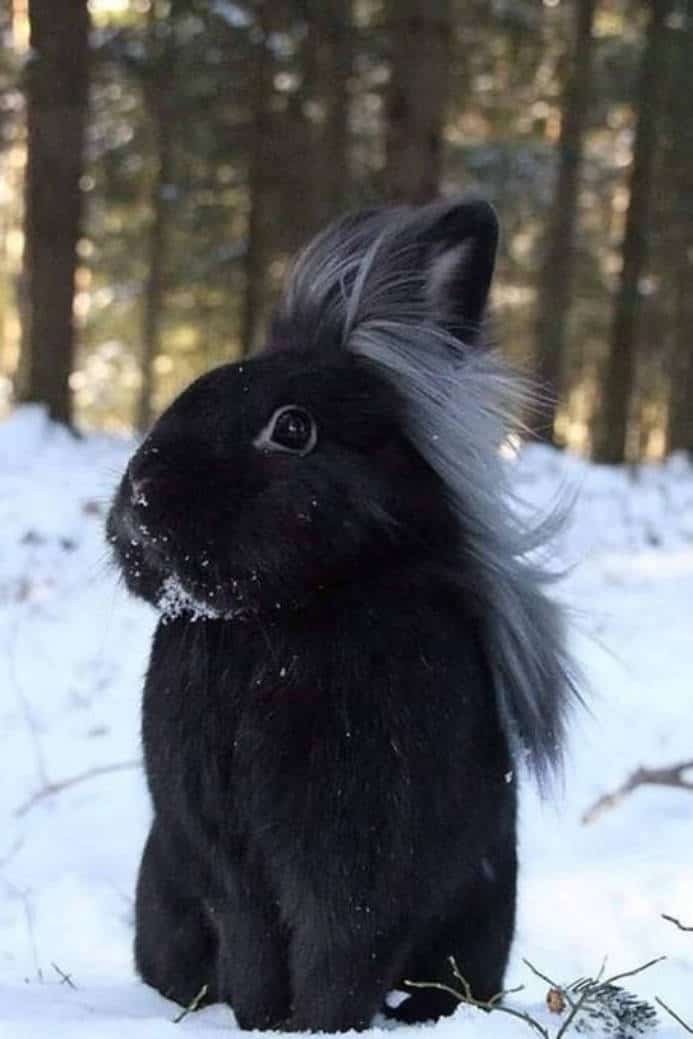 Lionhead rabbits originated from Belgium and are relatively new to the United States. They were created through cross-breeding a swiss fox and Netherland dwarf rabbit.

These rabbits’ life expectancy is from eight to ten years which is longer than other breeds. As the name suggests, this rabbit breed’s head resembles a lion.

This is because of their head fur resembling a lion’s mane. Despite the comparison, lion head rabbits are smaller rabbits.

Even the fully grown and mature ones can be four pounds on the maximum. So, you can imagine small fluffy rabbits with mane fur hopping around their space.

Lionhead rabbits have thick, soft, and long fur. They come in several colors like

Their long and thick fur requires more effort in grooming as their hair is prone to matting. Lionhead rabbits are also sweat-natured and have a good temperament.

This makes them suitable as pets even if it’s your first time. They are calm, friendly, and great with children.

When entirely comfortable with you and the environment, these affectionate bunnies won’t hesitate to play with you, jump on your lap and ask for cuddling.

In taking care of Lionhead rabbits, it’s important to note that you need to give them plenty of room to play about and hop around. 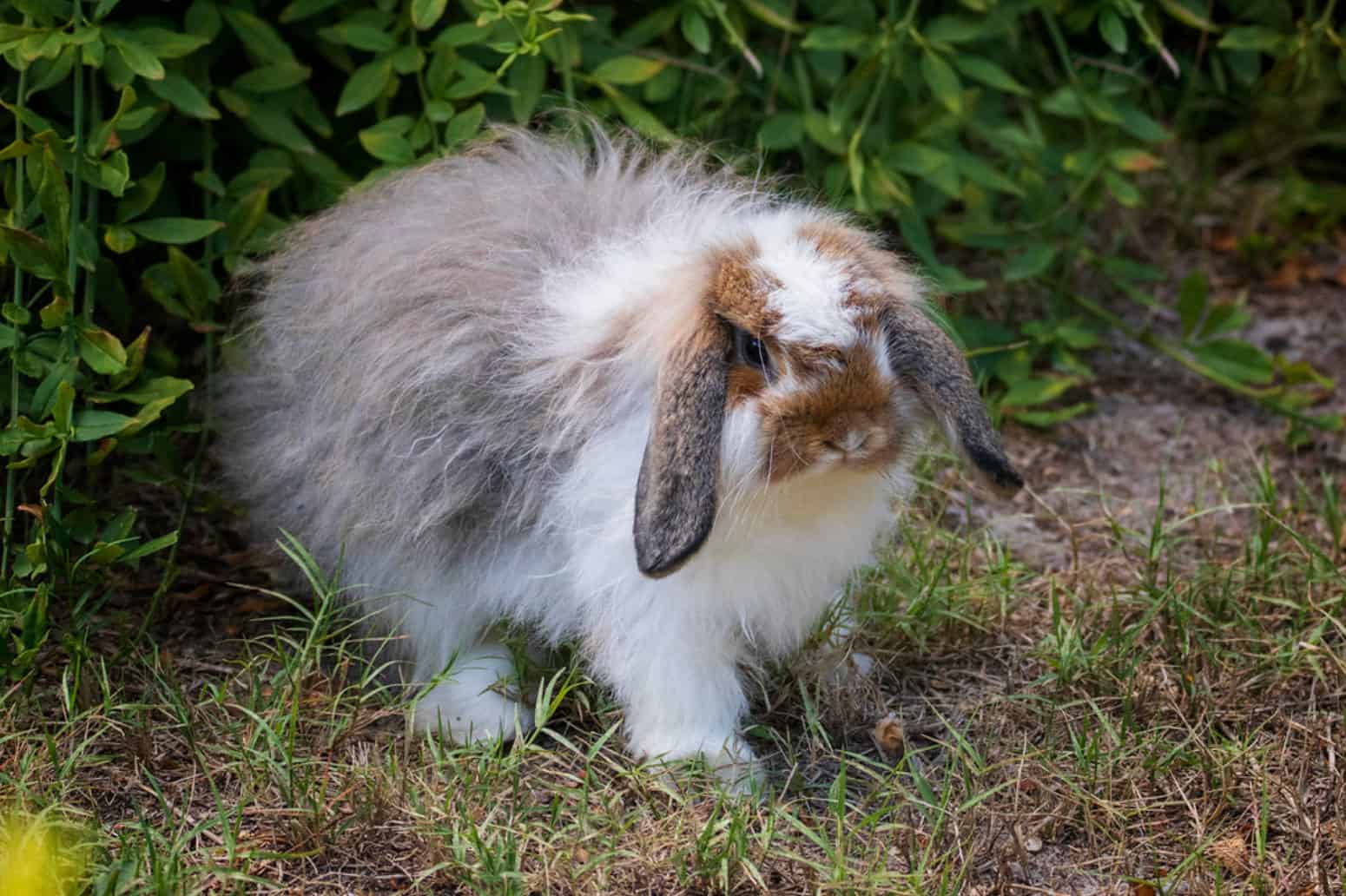 The American Fuzzy Lop is a smaller breed of rabbit. They are stout rabbits having small and thick bodies. This breed originated in the United States during the 1980s, and thus, the breed name.

They are descendants of the previously discussed breed, the Holland Lop. They give off extra cuteness because their flat face is partnered with long ears.

Their ears hang and droop by the side of their face, which is a signature feature for Lops. These characteristics make them look like cute fuzzballs. Their fur is wool. They can be spun and made into products just like regular wool.

Because of their long and thick fur, you must take time grooming them regularly. It’s recommended that you clean and check their beddings every week as you would want to avoid their coat getting contaminated.

They come in different colors but are mostly paired with white.

They are great companions as they are affectionate and docile. At the same time, you would need to give them enough space, preferably a considerable space, as American Fuzzy Lop is a very active breed.

Give them enough safe space to play and hop around as they are playful bunnies. It would also be fun to get them toys as they are very interactive and have a good time playing. 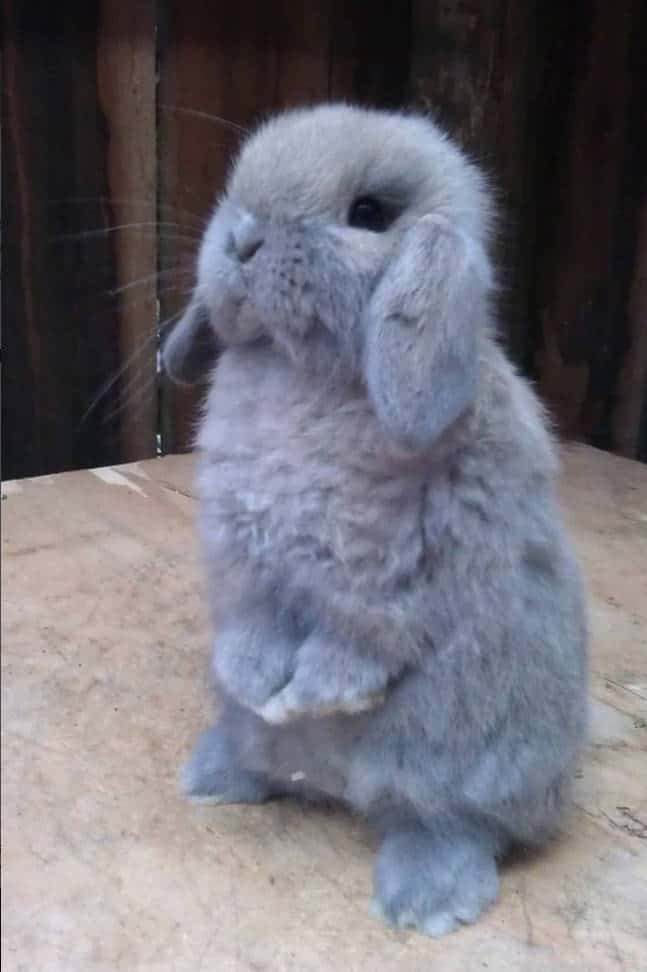 Cashmere Lops originated from Wales during the 1980s. This breed was found in a Dwarf Lop rabbit’s nest. As they are Lop rabbits, their ears droop down along their face, too, adding up to their cuteness.

These adorable rabbits are one of the sturdiest out there. Their bodies are compact with good muscles, broad bodies, and well-rounded.

Despite their small size and their legs being shorter than most, their legs are powerful. A Cashmere Lop’s face has good form with well-developed cheeks. All in all, they do have adorable features and strong ones.

Their coat is long and can measure from about 1.5 inches to 2 inches. A Cashmere Lop’s fur is also silky and thick, so extra effort in grooming is also appropriate. This breed comes in various colors, including the following.

These bunnies are inherently good pets as they have been domesticated for a long time, and as a matter of fact, they were bred to be friends. Cashmere Lops are bright bunnies and will get along well with adults or kids.

They remember and like being cared for. They can recognize people, so they know who their owner is, who their friends are and who is new to their eyes.

These rabbits will even greet people. Their size can be fragile for kids, but these are strong rabbits. However, extra care is still needed so you would be sure your rabbit isn’t injured in any way. 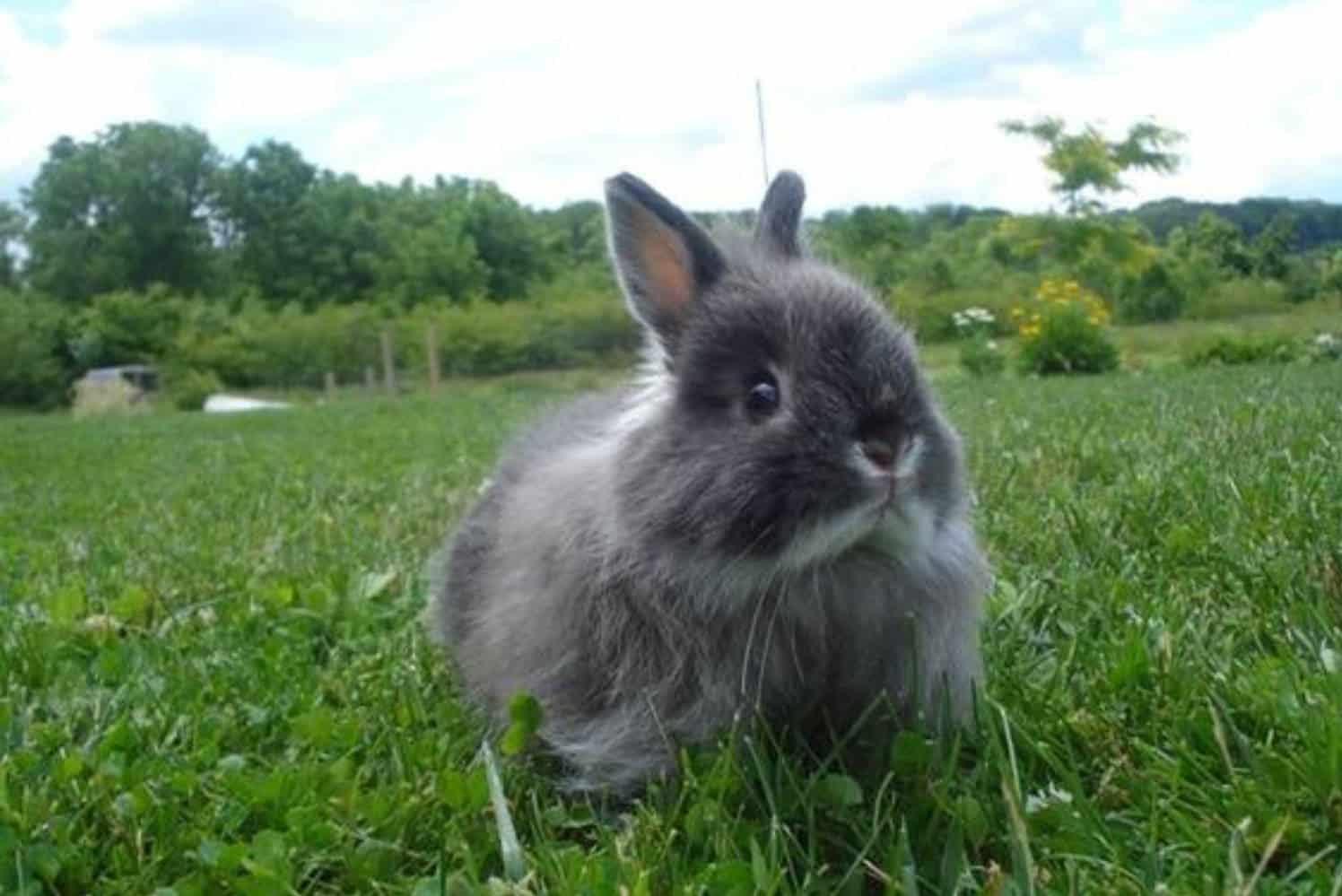 This breed is relatively new and originated from New Jersey, as suggested in the breed’s name. They hopped into the scene in 1984 with French Angora rabbits, and Netherland Dwarfs as ancestors.

These fluffy friends are relatively smaller and weigh one to three pounds. So, they fall under the dwarf breeds category. They look like small puffballs as they have a very poofy fur type.

They have a distinct and bold head shape, appearing flat and “square .” This characteristic earned them the nickname “mug head.” Despite their popularity, these rabbits are relatively cheap and cost just like average bunny pets.

Jersey Wooly comes in different colors, too, as follows.

Jersey Wooly rabbits were bred to be family pets, and so they are docile, calm, and family-oriented. These rabbits are small, so it’s safest for them to be kept indoors.

Aside from their sizes, these rabbits are not extremely temperature hardy, and they are pretty easy for predators to snatch.

These bunnies are curious and playful, so it’s just like raising a baby as it is recommended to rabbit-proof your homes and take necessary steps to avoid danger like live wires or anything heavy that can fall and injure your rabbit.

A Jersey Wooly is tiny, so their personal space should not be too much of a hassle to prepare. They are friendly and would go along with other rabbits with no problem. 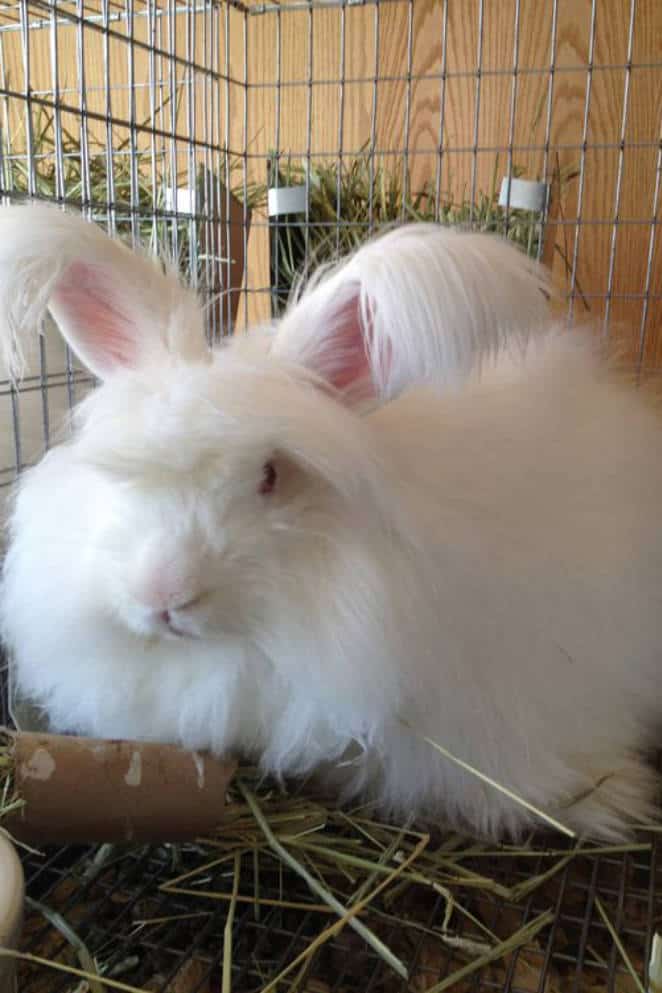 When talking about long-haired rabbits, you can’t do away with Angoras. These rabbits originated from Turkey and can weigh up to ten pounds. Indeed, one of the giants out of rabbit breeds.

Giant Angoras can live for up to 11 years. These giants have an oval-shaped head with a broad forehead. Despite their broad foreheads, they have a leaner muzzle.

Their face is also decorated with cheek decorations and tufts on their forehead and faces. Their ears are also show-stealers as they are tassled and gently fringed.

These rabbits have their molting season, which means you need to exert extra effort during these seasons too. They require fur harvesting three to four times a year. These giant rabbits stand out in a crowd. They also have a lot of color variations, such as the following.

These giants are clingy rabbits, requiring attention and bonding more than most rabbits. They like socializing and bonding with their owners as much as they like toys.

Once they develop a sense of trust and comfort with their owners, they will stay friends forever, and they’re affectionate like that. It would be helpful to place some toys in their personal space, so they don’t get bored.

Because of their size, it’s not recommended to keep Giant Angora in apartments. Despite their size, you still need to create a safe space to jump and play around. 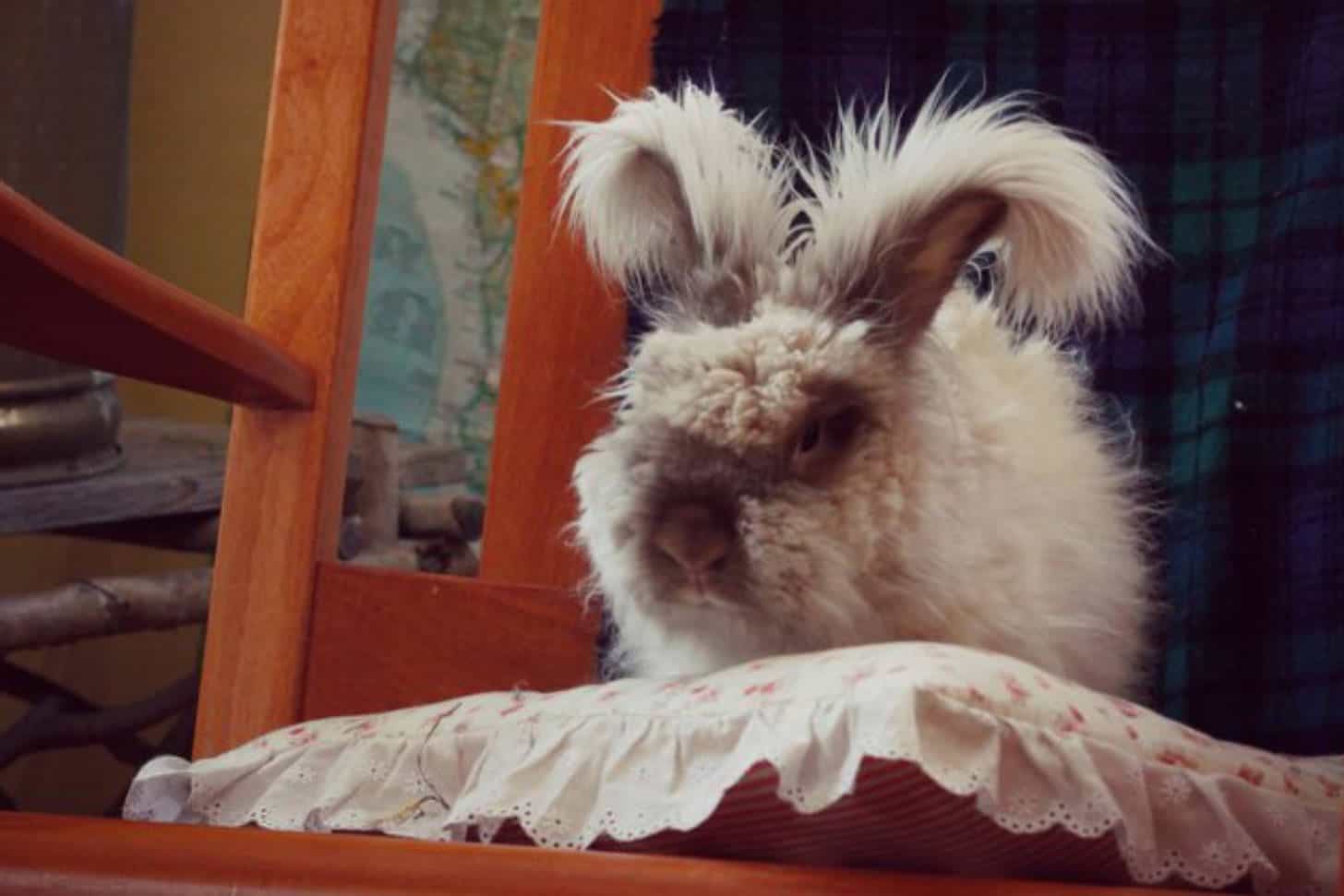 English Angoras originated from Turkey and are considered as one of the ancients of the Woolly rabbits. Coming from the family of Angoras, the English Angora is the smallest but still reaches up to five to seven and a half pounds.

These bunnies are famous for the unique embellishments on their face and ears. This type of rabbit can cost you $50 to $250, depending on the purpose. People usually buy them as pets, and some purchase English Angoras for show.

English Angoras are adorned with a lot of furnishing. They are covered with silky and woolly fur that encompasses even their feet.

Because of their thick coat and long hair, you would need to give extra effort and take them grooming now and then. This is important to prevent matting. English Angoras come in many colors, just like the others too. They come in the following colors.

These bunnies like socializing and bonding with the people they consider family. These rabbits love spending their time playing and giving affection.

In most cases, they like bonding with people grooming as they grow comfortable with that person. Unlike the past discussed breeds, English Angoras do not require too much attention so that you can go on peacefully with your lives.

However, it’s good to spend time with them as this will help them grow nicely and flourish the way they are supposed to. On the other hand, these rabbits can become aggressive when afraid or anxious. This being said, it’s always good to respect your rabbit’s space. 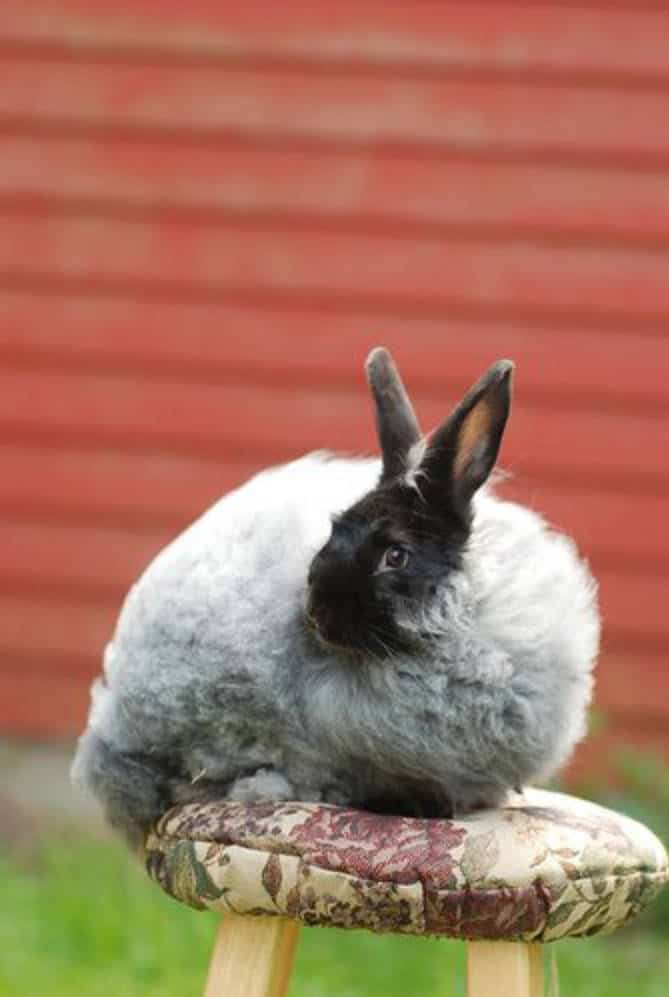 French Angora is one of the Angora breeds and arguably the second largest of all the Angora breeds. They can weigh up to 10.5 pounds. They are distinct in their size, lower maintenance coat, and fur placement.

They have not only one but two coats of hair. The first one is a coarse layer that extends past the undercoat. The second layer is a thick and crumpled wool coat extending up to six inches.

However, the recommended length is only two inches, so it’s good to follow it. The French Angora has its fur concentrated on their body rather than their feet, face, and ears like other Angora rabbits. French Angoras come in various colors like the following.

French Angoras are gentle rabbits who like to hang around and bond with their family. They may be shy and careful during the first weeks, but this is just because they tend to make sure that the environment is safe.

As you spend time with them, they become more comfortable around you. It’s also good to give them enough space to explore and play around. 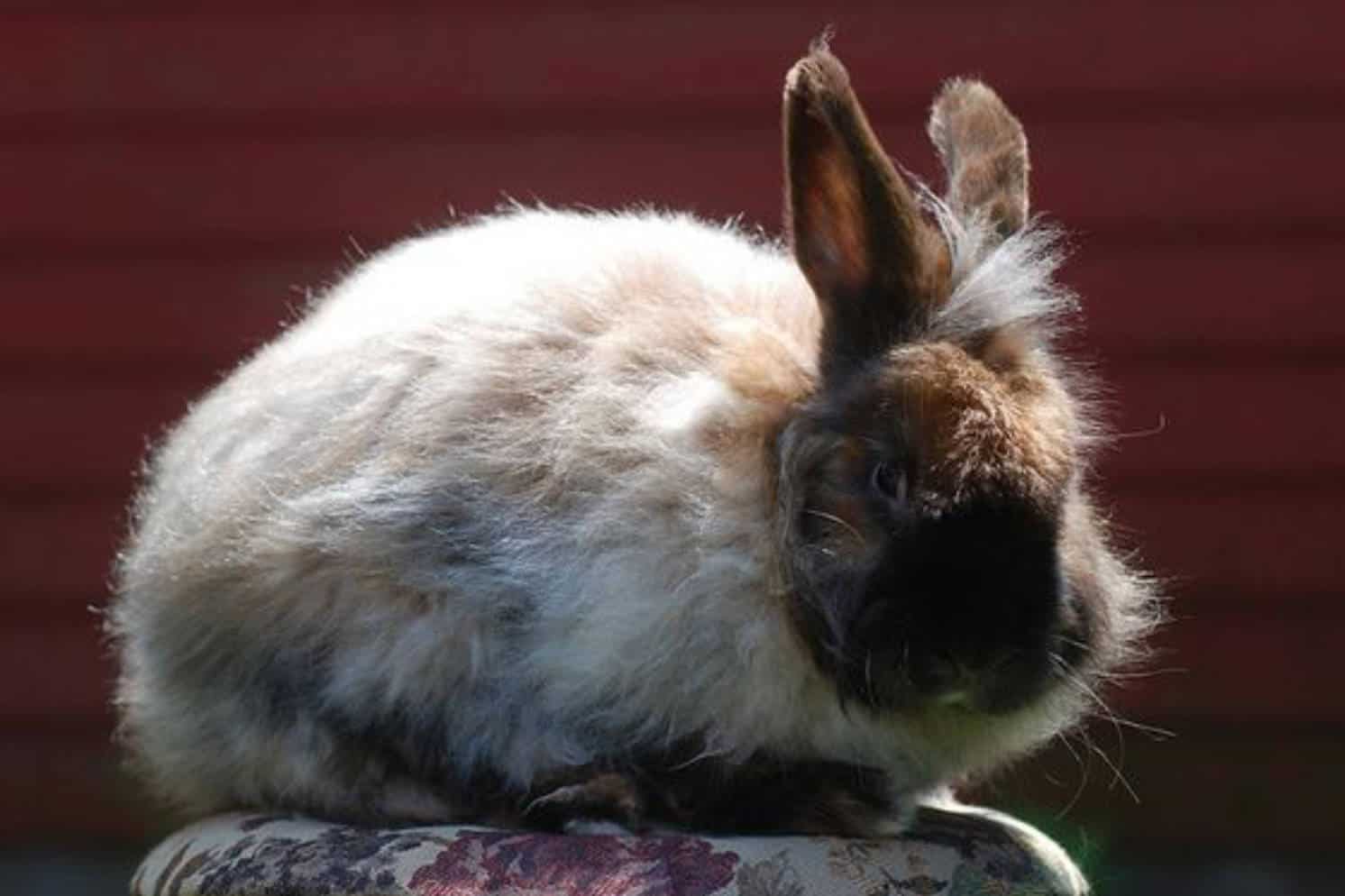 Coming from the Angora breed, Satin Angoras are among the medium-sized ones. These bunnies are usually bred for their coat. There is nothing to worry about as the fur harvest is not painful, and their fur will grow naturally.

From their name “Satin” Angora, it’s safe to assume they have silky and fine fur. The strands of their hair are distinct. Each is translucent, unlike other furs, which are usually opaque.

Because of their remarkable fur, they produce one of the prettiest and finest quality wool out of other rabbit breeds out there. They come in different colors too. Here are some of the standard fur colors for Satin Angoras.

Satin Angoras, just like other Angora breeds, are docile, calm, friendly, and affectionate. Apart from their playful nature, they are naturally curious, so it’s advised to rabbit-proof your home.

Watch out for unprotected wires hanging around as they may be interested and start biting them, putting your rabbit in danger.

These rabbits have no problem being picked up and cuddled. They love to hop and play around the house and outdoors too. It’s also good to let them out to get healthy sunlight.

Long-haired rabbits are sure fun to play and bond with. However, they also require extra care for their fur as it is not the same as most rabbit breeds.