If you plan to take care of some rabbits, you may want to consider the price. The higher the price, the rarer and better the rabbit breed is. To help you to know more, here is a list of the most expensive rabbit breeds. 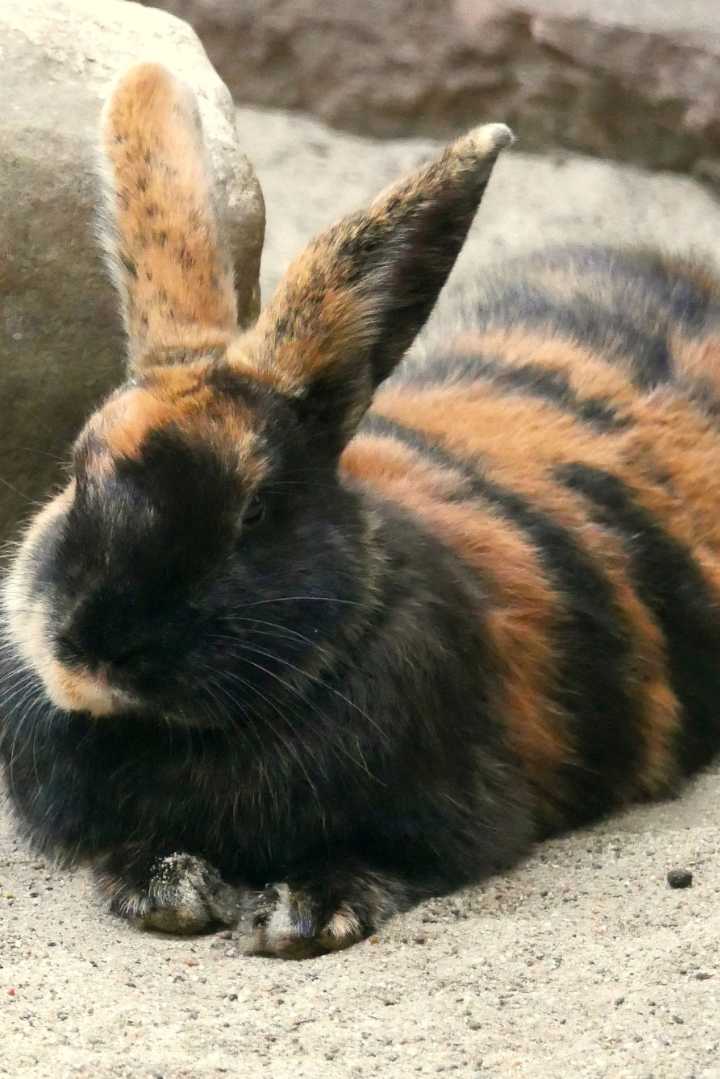 The first thing you’ll notice with a Harlequin rabbit is their one-of-a-kind coat color. There are two varieties of this rabbit breed, the Magpie and the Japanese.

If you are looking for a very outgoing and social rabbit, the Harlequin rabbit is a good choice. They are a curious breed, and because of this, they can enjoy doing things on their own or with some people.

Harlequin rabbits have no problem getting along since they are affectionate and goofy. Remember to always keep a safe space between you and them at the start.

The first mention of the Harlequin Rabbit happened in France in the year 1880. Their first official appearance was at an exhibit in Paris, France, in 1887. They were created by breeding a wild rabbit with the semi-wild Tortoiseshell Dutch rabbit breed.

After a few years, they were imported to England and eventually reached the United States in the 1920s. At the time of World War II, the Harlequin Rabbit, which was called the Japanese rabbit at the time, was mainly bred for meat. 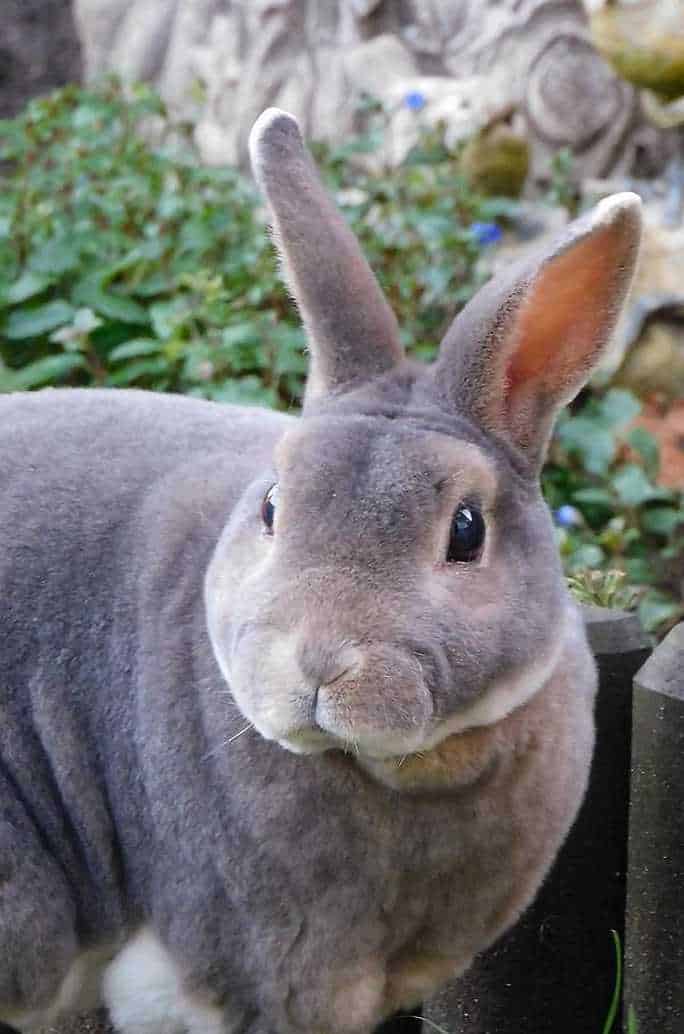 The best thing that makes the Rex rabbit stand out in a crowd of rabbits is its velvety coat. Their plush fur was one of the reasons why they were mainly bred back in the day, although it seemed to lessen over the years.

Their average weight falls between 7 and 11 pounds, depending on their sex. Most of the time, female Rex rabbits weigh heavier than male Rex rabbits.

According to the ARBA, there are 16 different color variations of the Rex rabbit. They are Amber, Blue, Californian, Chinchilla, Lilac, Opal, Red, Seal, Black, Broken, White, Sable, Castor, Chocolate, Lynx, and Otter.

Rex rabbits are considered an active breed. They like running and playing out in large spaces but enjoy quiet times too. Their intelligence and patience are also notable because they make them a perfect pet for families with children.

They are also very cuddly and playful, with a laid-back temperament that makes people fall in love with them.

The first recorded Rex rabbit was in Louché-Pringé, a small French town, in 1919. Wild rabbits were used to develop this breed, and breeders were mesmerized by the Rex rabbit’s velvety coat.

This breed was first presented during a Paris rabbit show in 1924. Many people became interested in this rabbit, so they were selectively bred later.

The Rex rabbit was imported to the United States by the year 1924. In the same year, the breed was recognized by the British Rabbit Council (BRC) and the American Rabbit Breeders Association (ARBA), which helped boost their popularity internationally.

Up to this date, Rex rabbits are well sought after by many breeders even though they are pretty pricey. 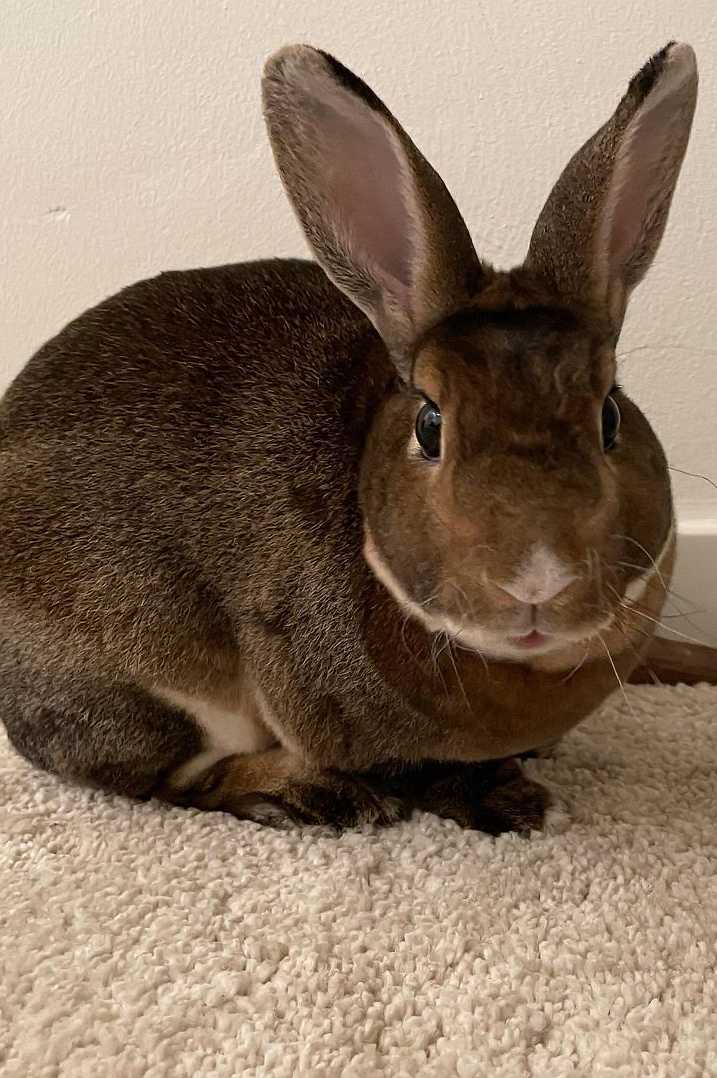 The only thing that differentiates a Mini Rex from the Standard Rex rabbit breed is their size. A Mini Rex rabbit can only weigh a maximum of 5 lbs, which is half of a Standard Rex’s average weight.

Their body is well-proportioned, with an outward growing velvet coat standard for all Rex breeds.

Thankfully, their coat grows well, so they do not need much grooming.

Mini Rex rabbits are clingy and affectionate, as they always want to be with their owners. They love attention and company, which are great for rabbits.

This breed also loves being carried most of the time, and they will happily do so for people they trust. Be mindful of their temperament since they can be frightened at first.

They are much smaller in size than the standard velvet coat of a regular Rex rabbit.

The first Mini Rex rabbit was developed in the early 1980s by Monna Berryhill, a well-known rabbit breeder. The mixed breeds were a male Dwarf Rex rabbit and a female Lynx Rex rabbit, which was a bit smaller in size.

The result was first presented at the ARBA Convention held in the United States in 1985. 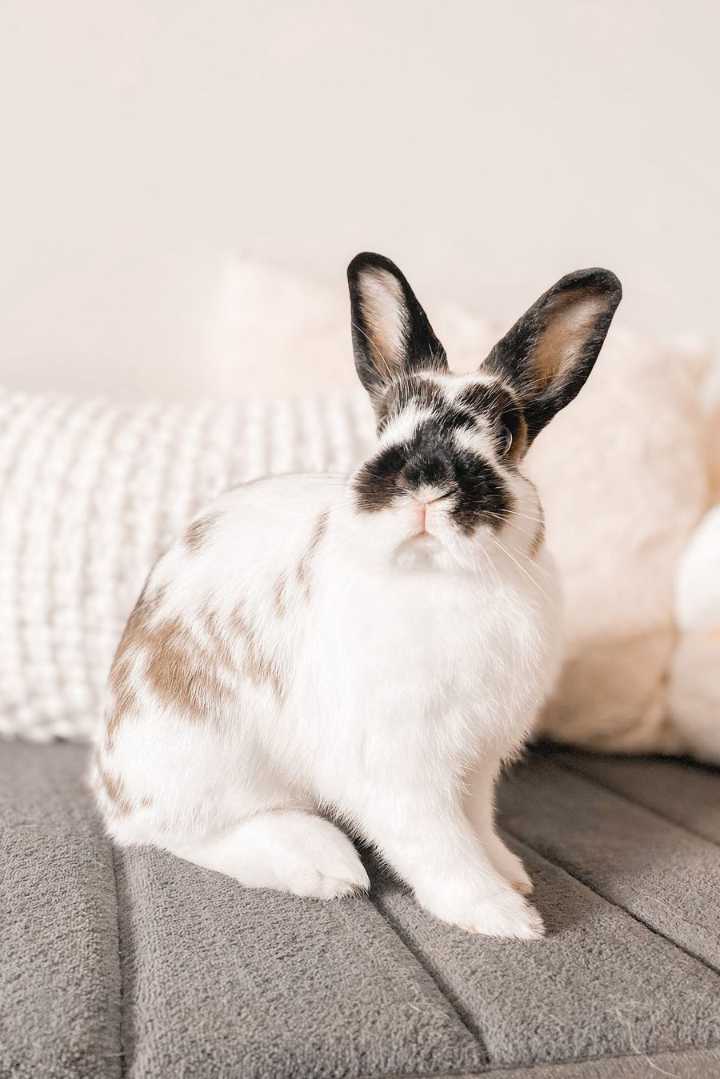 The Polish Rabbit is considered a dwarf breed with an average 2.5 to 3.5 lbs weight. They have a short head, round body, and short, erect ears that sit on top of their heads. Their soft, rollback fur is perfect since they won’t need much grooming.

When it comes to color, the ARBA has six different variations recognized. They are blue-eyed white, blue, broken, ruby-eyed white, chocolate, and black.

This breed is a great home pet for most families who have children. They are very cuddly, affectionate, and needy of attention. It’s terrible to keep them in their cages for a long time since they love being held.

They’re also very active, so keep them entertained with lots of toys. Be mindful of how they act in the first few days and give them enough space to feel comfortable.

The first mention of a Polish rabbit in history was back in Hull, England, in 1884. There is no known exact origin of the Polish Rabbit, but they are thought to be named “Polish” because of their glossy fur. That’s why it is known that they first came from England and not Poland.

This breed was thought to be an offspring of a Himalayan rabbit and a Dutch rabbit. There was only one variety of Polish rabbits in the late 1800s, a white coat with red eyes.

They were mainly bred for meat even though they were small. In 1912, they were brought to the United States, recognized by the ARBA, and were bred with other breeds to create new ones, such as the Netherland Dwarf. 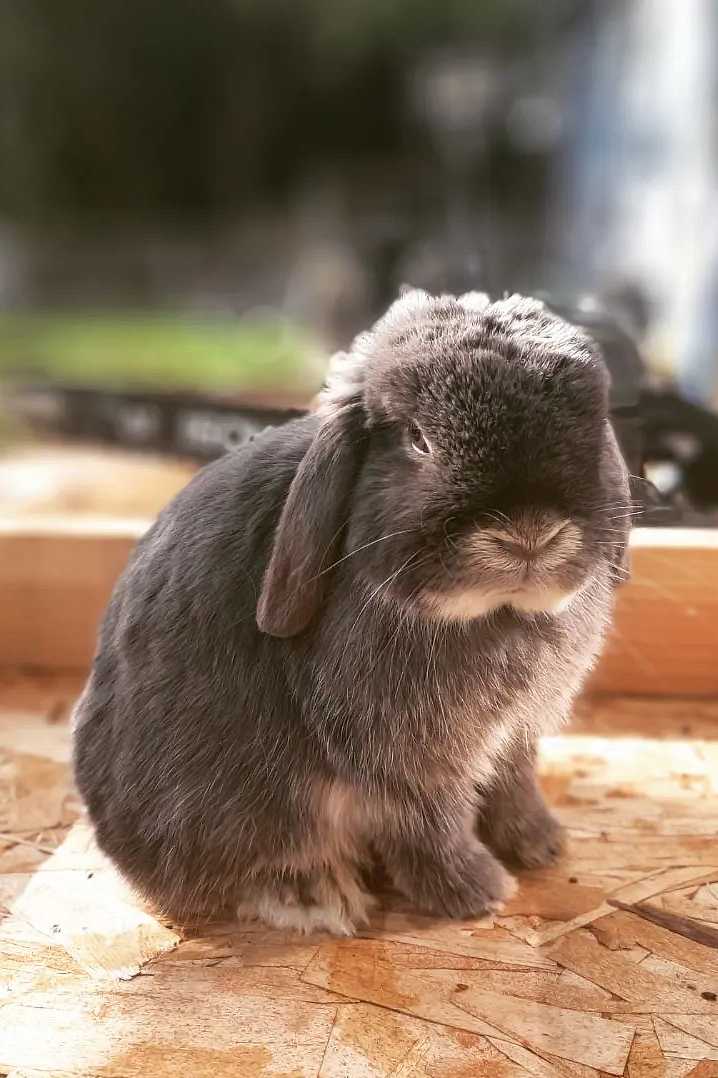 Holland Lop is one of the smaller rabbit breeds with an average weight of between 2 to 4 lbs. On average, female Holland Lops are bigger than males.

They look rounded because they usually just fold their hind legs and use their front legs. One of their distinctive features is a fur puff on the back of their heads called a crown.

Their rollback fur comes in many different color and pattern variations. Some patterns include broken and white bands, while colors are black, chocolate, cream, and white.

This breed is gentle and friendly with people and other rabbit breeds. They are also very playful and energetic, making them great for children. Give them some time at the start to warm up to you, and you’ll never get enough of them.

The Holland Lop is one of the most sought-after rabbit breeds worldwide. This cuddly breed is a product of selective breeding to put together the best qualities you can ever find in rabbits. It all started in the 1950s with Adriann de Cock, a Dutch rabbit breeder.

He started by mixing together the Netherland Dwarf Rabbit and the French Lop. However, these two breeds were so different that he did not get the desired result.

He tried again in 1952 when he mixed a male English Lop with a female the litter of the previous breeding, and that is where he got the Holland Lop.

This rabbit breed was recognized by the American Rabbit Breeders Association (ARBA) in 1976 and the Netherlands’ Governing Rabbit Council in 1964. Up to this date, the Holland Lop is still one of the most popular rabbit breeds. 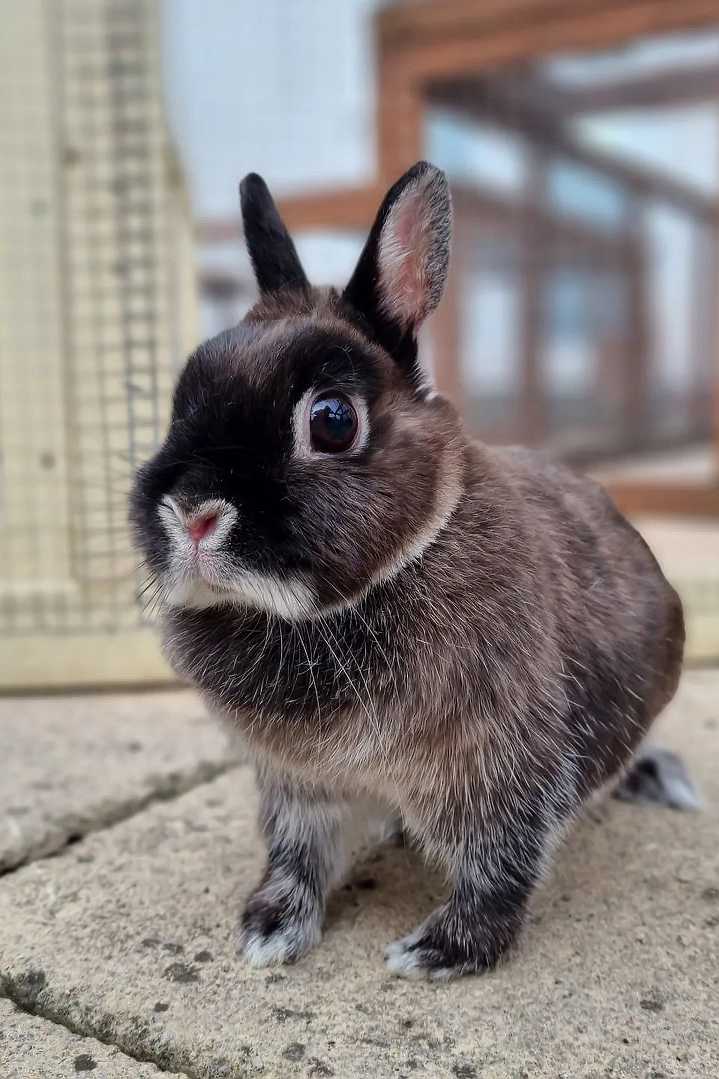 As the name implies, the Netherland Dwarf is a small breed that averagely weighs from 2 to 2.5 lbs. They have short erect ears with compact bodies and short legs on their large heads. Their coat is medium length and soft, which is a big plus since they do not need much grooming.

The ARBA has recognized many different variations in the Netherland Dwarf’s color. It falls into various classifications: self, agouti, shaded, and tan. Some of their recognized colors are black, chocolate, tortoiseshell, blue, orange, sable point, and black silver marten.

At first, like every other rabbit breed, the Netherland Dwarf may seem shy or scared with every approach.

Do not hog their space, and let them be comfortable around you first. Once they warm up to you, they’ll be so affectionate and energetic that they will always want to be around you.

The Netherland Dwarf was first developed in Holland, where a group of five men continuously worked to create a naturally small rabbit.

They worked for more than 30 years, breeding local wild rabbits with an all-white Hermelin rabbit until they successfully developed the Netherland Dwarf. The breed was first recognized in 1940, but WWII followed and stopped any improvement or development with the breed.

In 1965, this breed was first introduced to North America. It was recognized by the American Rabbit Breeders Association (ARBA) in 1969. Until now, the Netherland Dwarf is still one of the most well-known breeds worldwide. 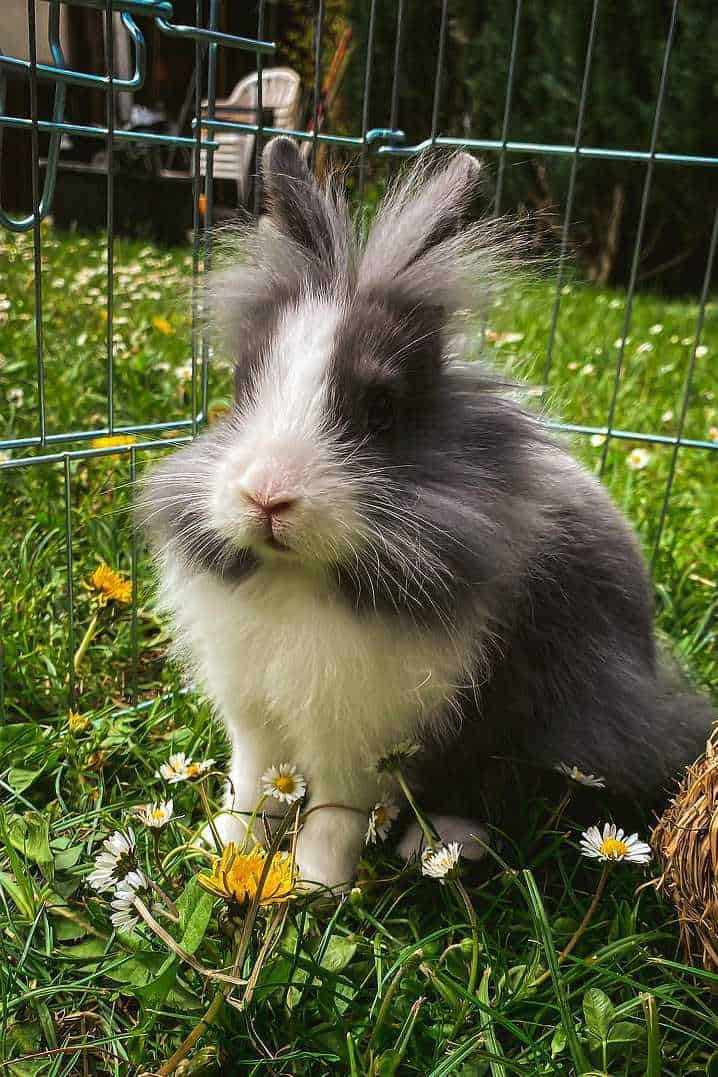 With its unique mane, the Lionhead rabbit is easy to identify. They are another small breed, only weighing 3.5 lbs at maximum.

Their ears stand erect, and they have a single or double mane, depending on their recessive gene. The only way to determine their mane type is by having them examined at birth.

One of the disadvantages of this fluffy breed is that they need a lot of grooming to keep their coat well-maintained. There are 10 ARBA-recognized coat colors for a Lionhead Rabbit.

Lionhead rabbits are known to be friendly and active. They are affectionate with their owners as they love attention and a lot of cuddles.

Their activeness will play a significant role since they would love to play around and get your attention most of the time. Make sure that you spend some time at the start to bond with your rabbit and give them enough space to feel comfortable.

The Lionhead Rabbit is one of the most recently introduced rabbit breeds in the United States. It was first developed in Belgium and France, where breeders wanted to create a new rabbit breed with a long coat.

Thus, a Netherland Dwarf and a miniature Swiss Fox were bred together, causing a genetic mutation. This mutation is called the “mane” gene since it causes wool around the head.

Because of their one-of-a-kind appearance, they have become more well-known internationally. They were first imported to the United States in 1998, but they were not recognized by associations until the 2000s.

Take this knowledge with you when searching for a rabbit to adopt and care for.