If you’re thinking of adding this sturdy yet cute rabbit as part of your family, read on to know more about their characteristics, care, and maintenance.

An Overview of the French Angora Rabbit

The Origin of the French Angora Rabbits 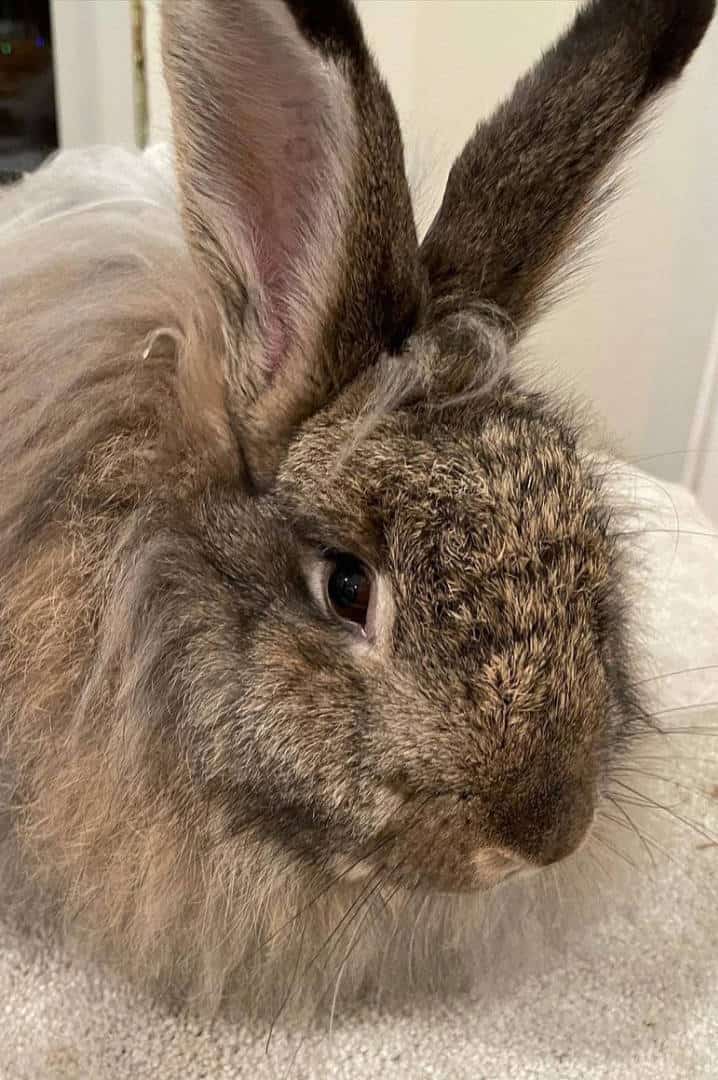 In 1723 sailors from Angora (now known as Ankara), Turkey brought giant, furry rabbits to France. These rabbits closely resemble the French Angora that is known today.

The first Angoras that arrived in the US were named Angora Woolers. The American Rabbit Breeders Association (ARBA) used the term for any rabbit that can grow thick coats for wool production.

All “Angoras” had similar characteristics and there were no clear distinctions between each kind.

The commercial body type of the French Angora rabbit is characterized by a strong and robust frame. The ARBA lists it as the second-largest Angora rabbit breed, coming next after the English Angora.

The ideal weight of the French Angora is about 8.5 pounds. However, any weight between 7.5 and 10.5 pounds still falls within the breed standard.

The French Angora’s strong and firm body is oval-shaped. Its head also takes the same shape and should be proportional to the whole body.

Its thick coat has two layers: a lumpy guard hair that grows past the undercoat, and a chunky, frizzy wool coat.

You will not find any wool on the French Angora’s face and front feet, toes, and ankles, however, its hind legs and ears may have some tufting.

According to the ARBA, the following are the coat varieties of the French Angora Rabbit. 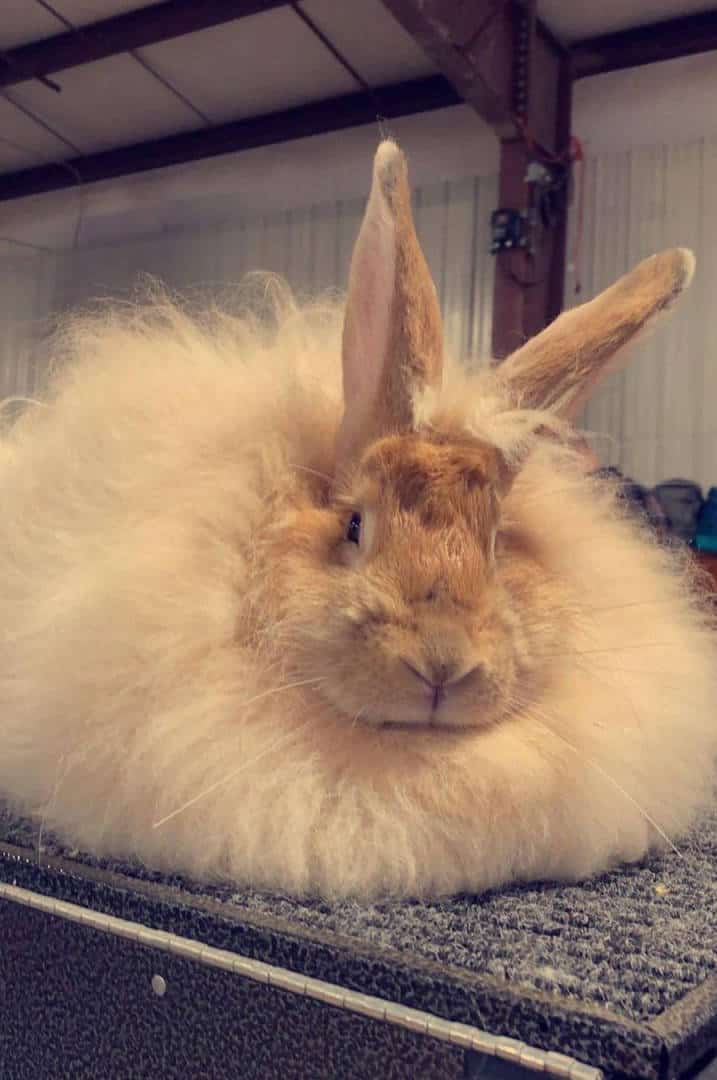 The French Angora rabbit may have been originally bred for its wool and meat but they can also be great pets. They just need a lot of attention, affection, and love to thrive in a domestic setting.

These adorable bunnies love to hop and explore their environment. Their sweet and docile nature becomes even more pronounced when they are allowed out of their enclosures to socialize.

You might notice their distinct personality once you get to know them, but they are generally calm, even-tempered, and friendly to humans.

French Angoras are perfect for families with older children who already know how to handle larger pets. They can also be great for couples who are looking forward to being pet parents.

These bunnies are more challenging to litter train than dogs and cats but it can be possible with a lot of time and patience. Potty training rabbits can take longer than other pets and rewards are an essential part of the process.

French Angoras have a tendency to turn your shoes or slippers into chew toys since they love to gnaw on anything. They also enjoy playing with toys to entertain themselves. 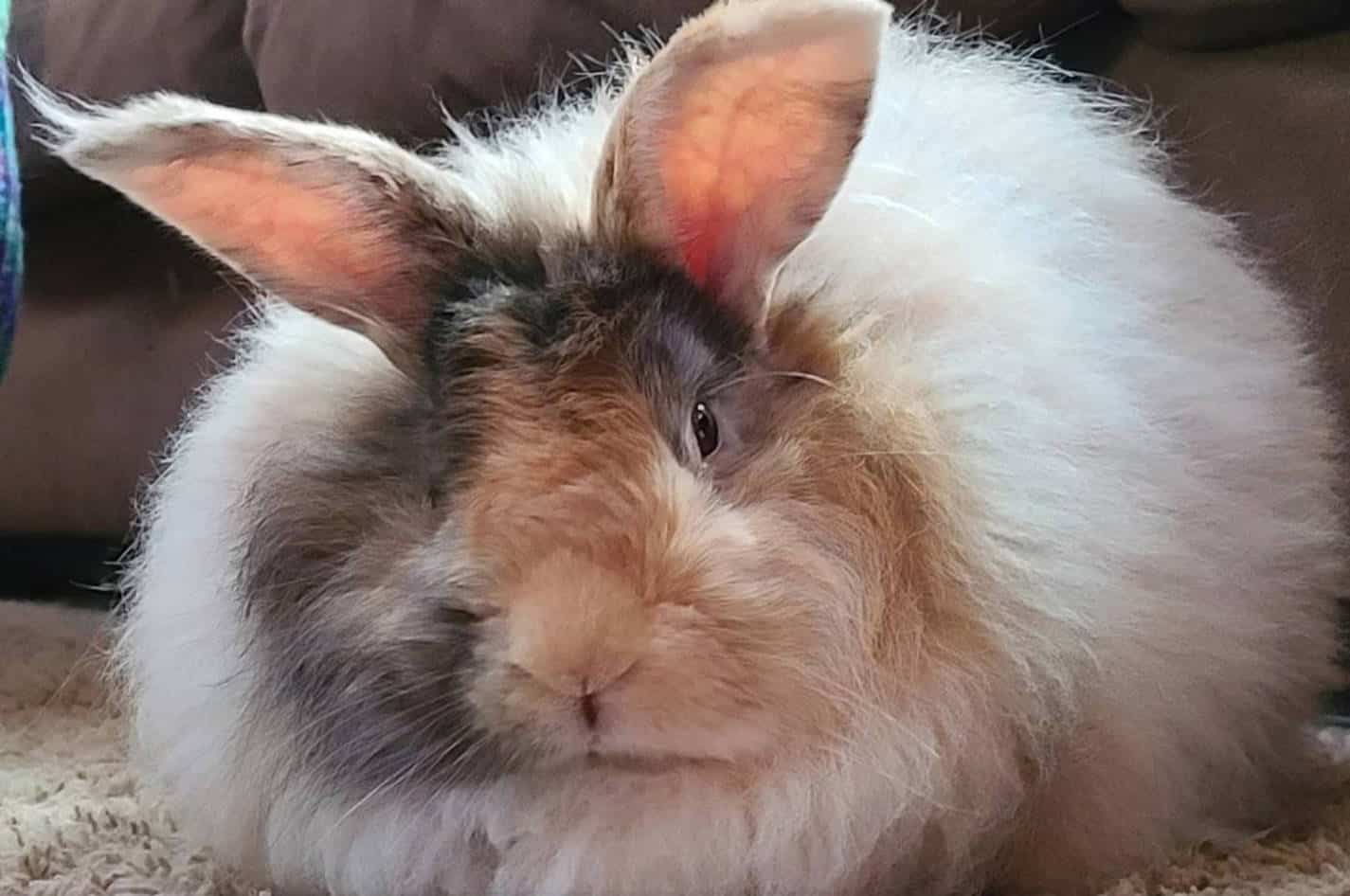 French Angora rabbits reproduce like the domestic bunnies that they are. Breeding begins between five to eight weeks old and can happen any time of the year.

The usual method is forced breeding where male rabbits are held in a cage and the female joins him after a few days. Mating usually takes a short time and you will know it’s over when the buck (male rabbit) leaves the doe (female rabbit) alone.

Gestation usually takes 38 days. You will know if the mother rabbit is ready to give birth when she seems restless and starts to look for a nesting place. She will also ignore food and water that is given her and refuses to socialize.

Usually, a mother rabbit gives birth to three to five offspring. She will leave and cover her nest after cleaning and nursing her baby bunnies.

She only comes back in the evenings to nurse them for a short while. The baby French Angoras will open their eyes after a week and wean from drinking milk at around ten to 12 days.

A doe can get pregnant around three to four times a year. However, the success of the pregnancy and birthing process will all depend on the mother’s health and environmental conditions.

French Angoras can live for up to seven to 12 years. Their usual health issues stem from their thick and wooly coats. Here are some of their medical concerns and their corresponding treatment. 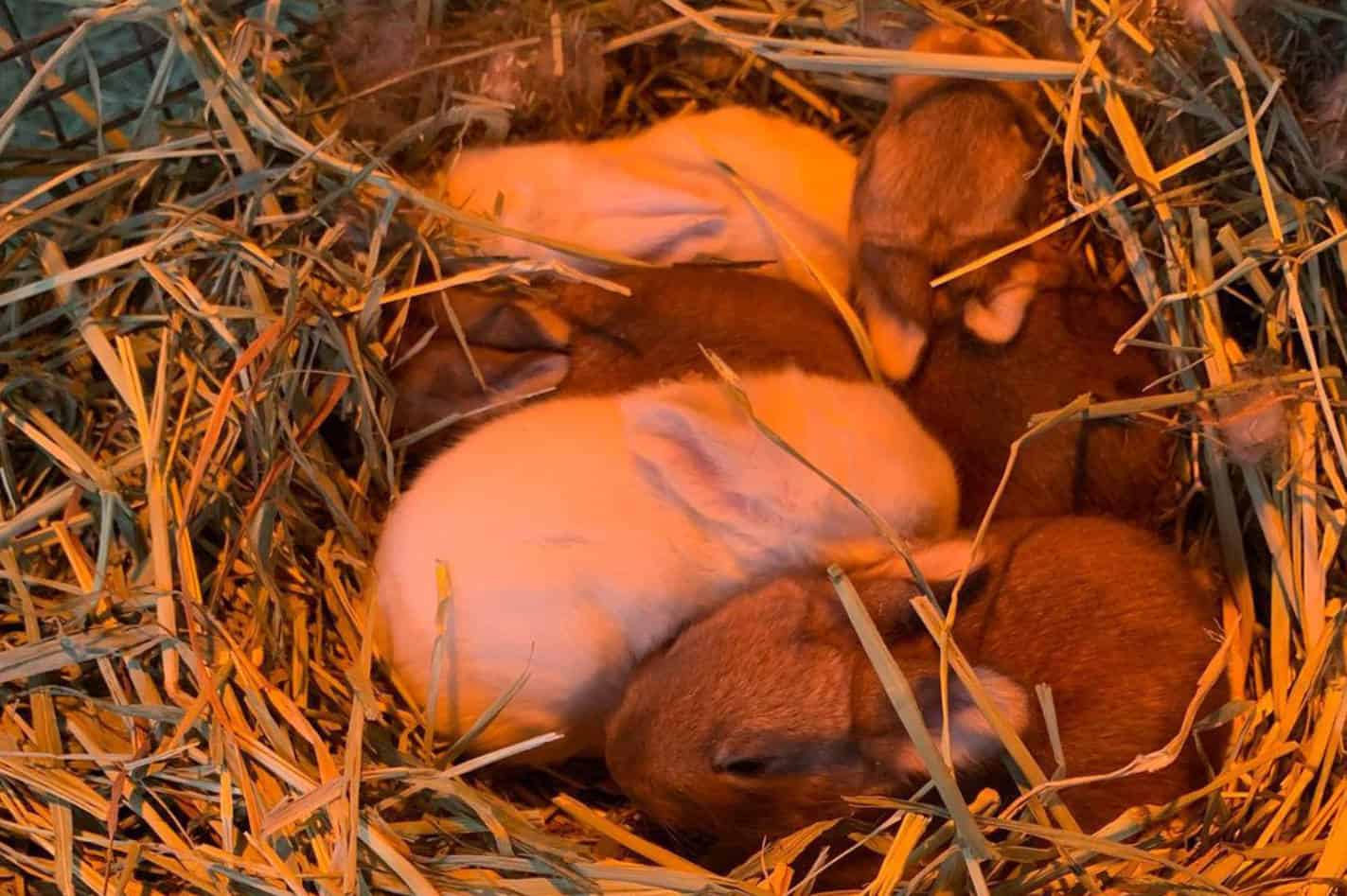 Just like cats, rabbits groom themselves to keep clean. They tend to swallow some loose hair, especially when they’re shedding too much. French Angoras have thicker, denser coats so there’s a greater chance that they’ll ingest huge chunks of fur.

Rabbits do not have a cat’s ability to expel the hair that they’ve swallowed. Therefore, fibers can pile up inside their stomachs and cause intestinal blockage and digestive problems. When this happens, a rabbit will refuse to eat or drink because it feels stuffed.

Here are some symptoms of wool block that you need to observe in your French Angoras.

It would be best to seek a veterinarian’s advice as soon as you observe any of these symptoms. Wool block is a serious condition that may cause your rabbits to die. Your vet will know what to do with your bunny’s condition.

It would also help if you feed your rabbits hay and nothing else. Stop giving them pellets as soon as you observe any of the symptoms. 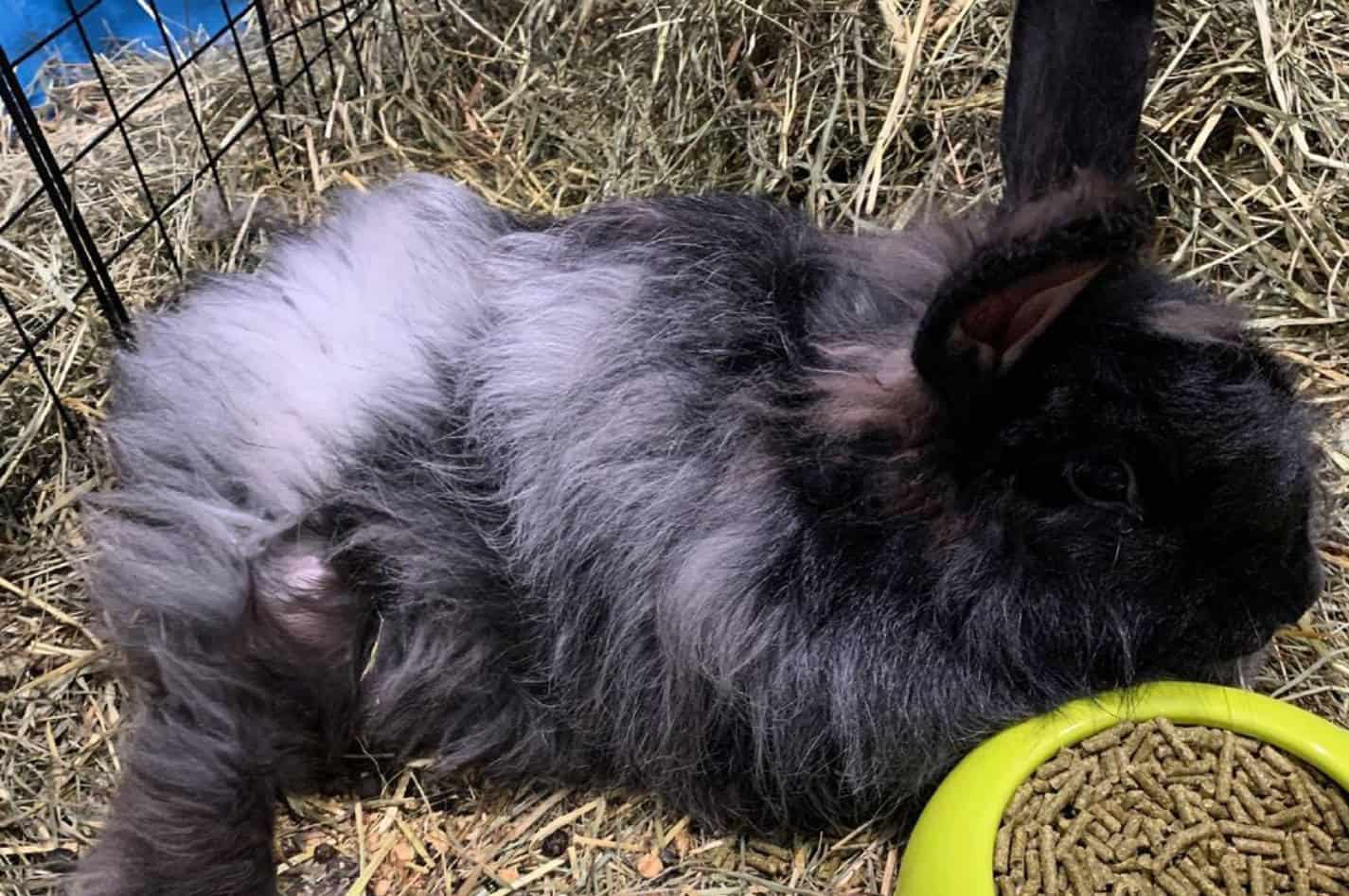 These tiny parasites look like dandruff at first glance. They burrow deep into the rabbit’s skin and cause intense itchiness and irritation. Rabbits would scratch profusely when infested with these bugs resulting in loss of wool and red, bald patches.

Medicines such as Revolution, Cydectin, and Ivomec are treatments for fur mites.

The French Angora’s thick and dense coat helps them stay warm during cold months. However, these fluffy layers can lead to overheating during hot months.

If you see your rabbit breathing heavily while sprawled in its space, it might already be overheating. You may also notice their ears becoming reddish and warm to the touch.

If your rabbits are staying outdoors, transfer them inside or to a cooler and shadier place. It would also help them cool down if you place frozen water bottles near their bed. Licking the cold moisture from the bottle and inhaling the cool air will make them feel refreshed.

How to Care for Your French Angora Rabbit 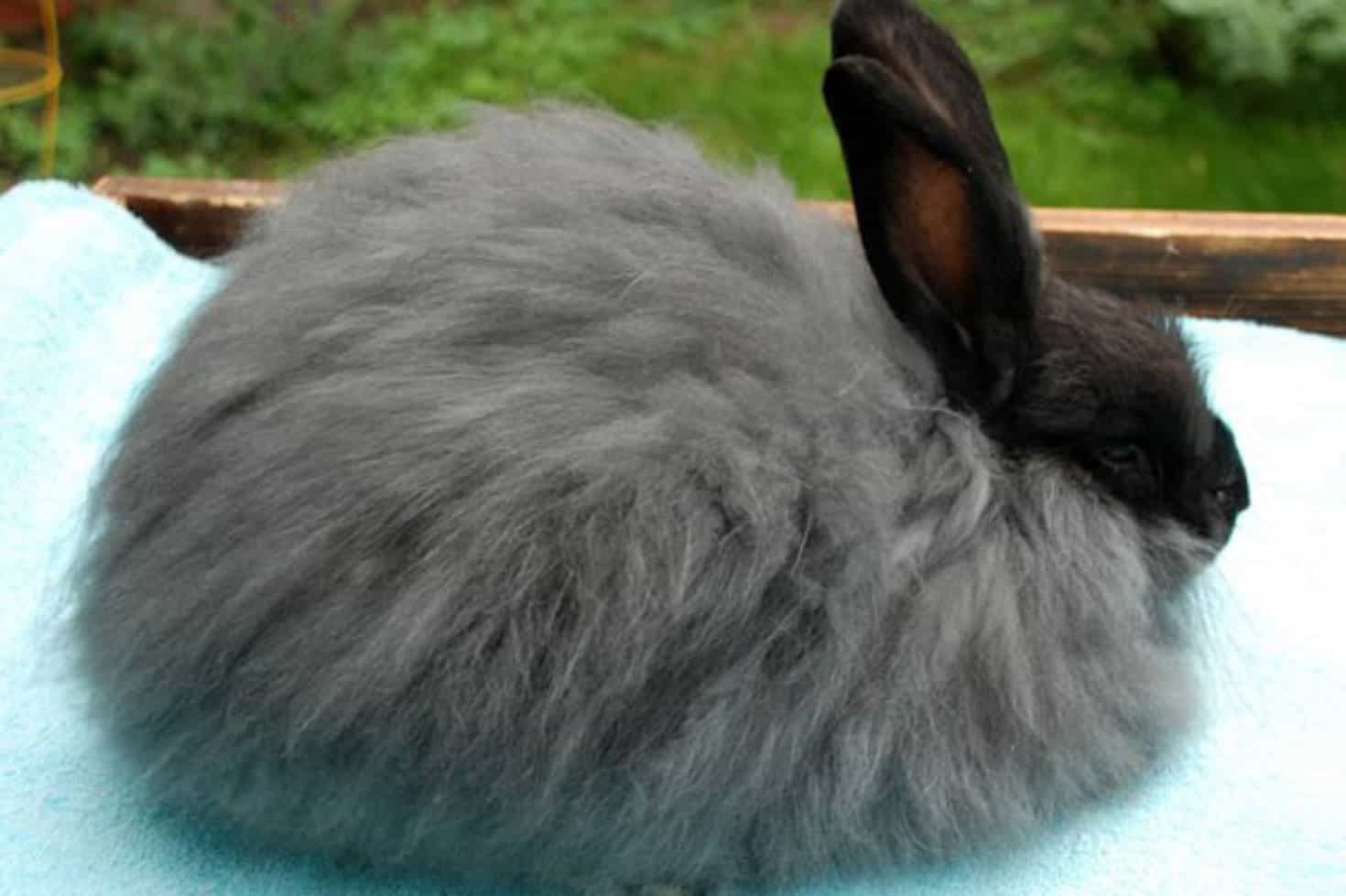 Compared to other Angora breeds, the French Angora is not too high maintenance. Their care revolves mostly around the maintenance of their fur. Remember that most of their health issues are caused by their thick coat.

Just like any other rabbit breed, a French Angora’s diet consists mostly of hay and pellets. You must give fruits and vegetables sparingly to prevent digestive problems and other health issues.

Store-bought treats and fruits high in sugar should also be given in moderation. Please provide them with fresh and clean water to avoid dehydration.

Another rule of thumb is to include at least 13% fiber in their diet as a way of preventing wool block.

French Angora rabbits are beautiful, calm, and friendly, making them delightful as pets. If you decide to bring one home, make sure to allow time to care for them, especially their coats. Your effort will be greatly rewarded with their adorable features and friendly disposition.