The Giant Angora Rabbit is one of five angora rabbit breeds recognized for its fur and wool production. These breeds are the largest Angora Rabbit, but their kind demeanor makes them an ideal pet. 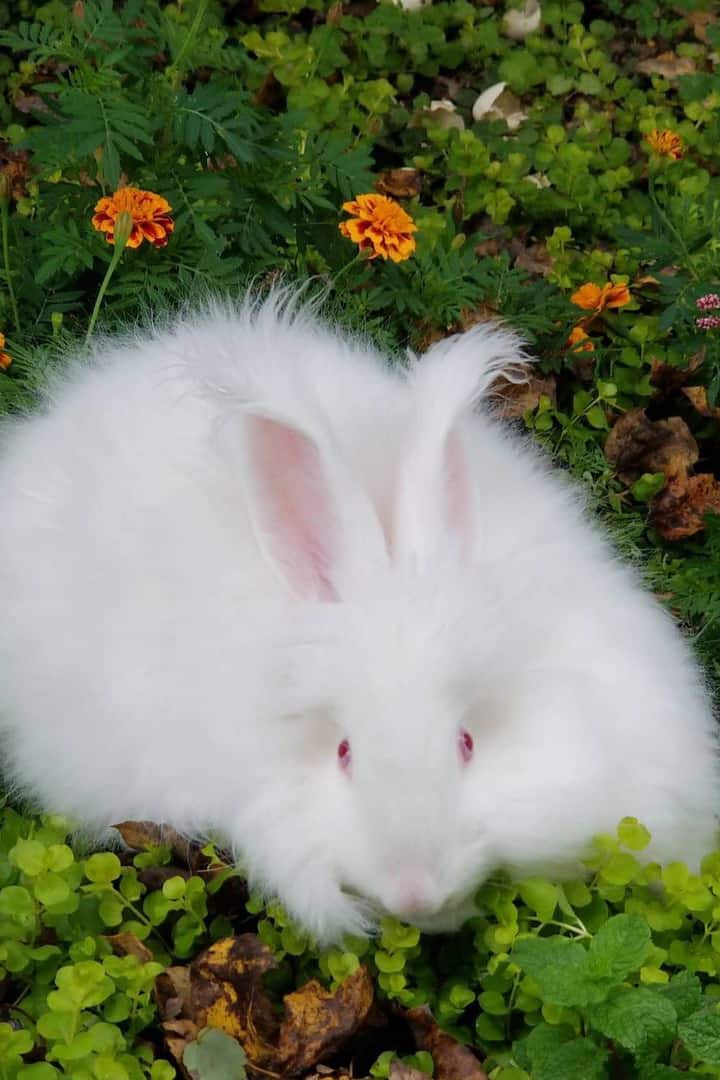 Initially, ARBA recognized only four Angora Rabbit breeds. Louise Walsh of Taunton, Massachusetts, was the one who spearheaded the development of a larger Angora that was distinct from the others. Her objective is to develop a breed that is an excellent producer of wool and is easy to care for.

She crossed German Angoras with larger commercial breeds such as the French Lop and Flemish giant to create a more enormous rabbit. The result is an all-white rabbit with extraordinary high-quality wool. She named the Giant Angora due to its extra-large size compared to other Angora breeds. The ARBA approved the Giant Angora Rabbit in 1988. 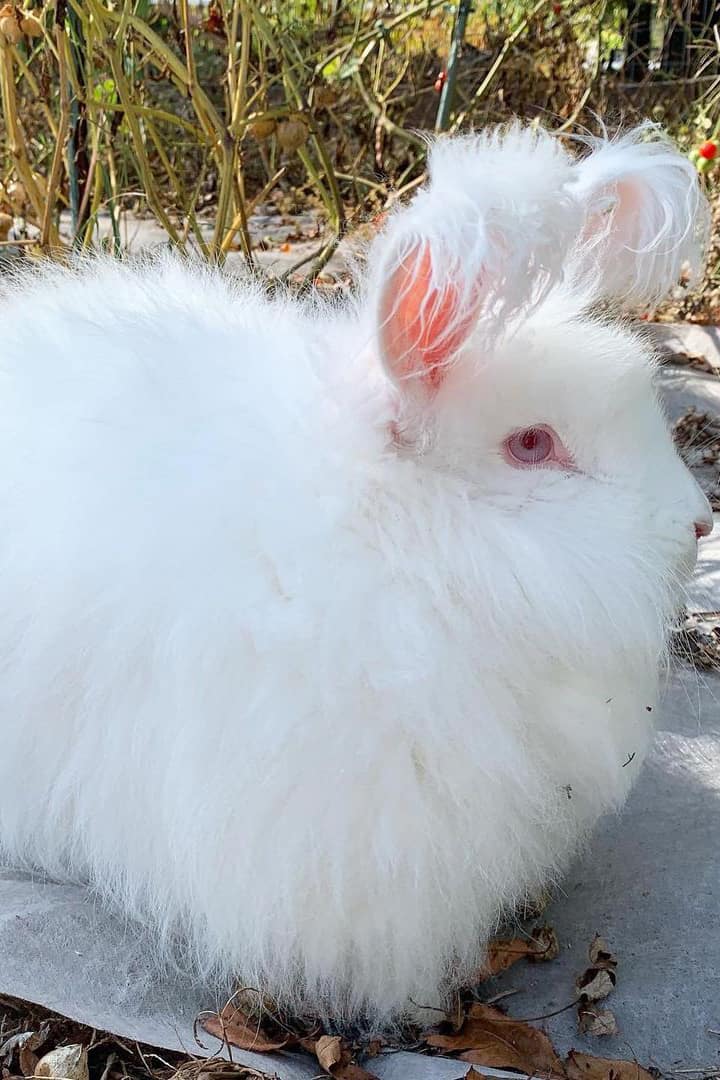 The American Rabbit Breeders Association recognizes the Giant Angora is the largest of the Angora rabbits. This is the breed’s sole 6-Class animal. These rabbits are distinguished by their large, fluffy coats. They are popular at rabbit events and are prized for the quality of their wool. We shall cover the physical characteristics of Giant Angoras in depth.

The Giant Angora has a commercial-type body with a thick coat of wool covers. The average weight of one of these rabbits is between 9.5 and 12 lbs. They have a large forehead covered in wool like the rest of their face, except for their muzzle. Their wool lends them a squishy, pin-cushion-like appearance.

The Giant Angora has a massive oval head with a prominent forehead and a slightly narrow nose. They have tufts on their foreheads and cheeks. Although the head trimmings are visible, the does (females) are not as heavily trimmed as the bucks (Male).

The ears have a little fringe and are neatly tasseled at the tips.

The Giant Angora Rabbit is white with ruby-colored eyes.

Giant Angora rabbits produce the highest number of wool among the angora rabbit types. Their wool has three kinds because of their different textures, namely:

Soft underwool – The underwool is to feature prominently over the other two hair kinds. It is medium-fine, silky, softly waved, and glossy.

Awn Fluff is a more robust, wavy wool with a guard hair tip. This is located between the Underwool and Awn Hair.

Awn hair – Alternatively referred to as guard hair, is the third type of fiber. Awn Hair is a straight, strong hair that protrudes above the wool and must be visible.

To keep their wool mat-free, brush it once every two days or as needed using a bristles brush. If the wool on your Giant Angora becomes soiled, spot-clean it with a moist towel.

As with other Angoras, the Giant Angora rabbit is available in various colors, ranging from gray to brown to black. There are also some with broken colors. The color of your Angora will be determined by the color group.

These categories include the agouti, the white, the broken, the darkened, and the self. White, black, blue, chocolate, blue tort, black tort, chocolate, tort, and chestnut are the most common Angora rabbits colors.

However, the ARBA accepts only ruby-eyed white rabbits, also known as albino rabbits. While some breeders are working on generating a black Giant Angora Rabbit, ARBA has not yet approved this color.

How do they behave and interact with people?

While the Giant Angora rabbit, like most rabbits, is amiable and laid-back, they require ample time with their owners to interact and bond. Despite being cooped up in their hutch for extended periods, these bunnies would much rather be with you. This is the only way it can demonstrate its personality effectively.

Concentrate your patience and affection on the bunny. It must be taught to use the small boxes. Position the litter box strategically to avoid droppings spreading throughout the house.

When a rabbit is kept inside an enclosure and isolated from human interaction, it cannot develop a positive and lasting relationship. Therefore, whether you choose to keep it indoors or outside, ensure that adequate space is provided. This will allow it to travel freely and safely.

On the other hand, an indoor rabbit must have the ability to hop around and get sunshine. The outdoor rabbit must also spend many hours each day outside the enclosure. This is to allow it to stretch its legs within the gated yard. Be considerate of your Angora’s personal space, even more so when they are new to your home. If they are anxious or fearful, they may attempt to bite.

What is the proper way to keep them safe and comfortable? 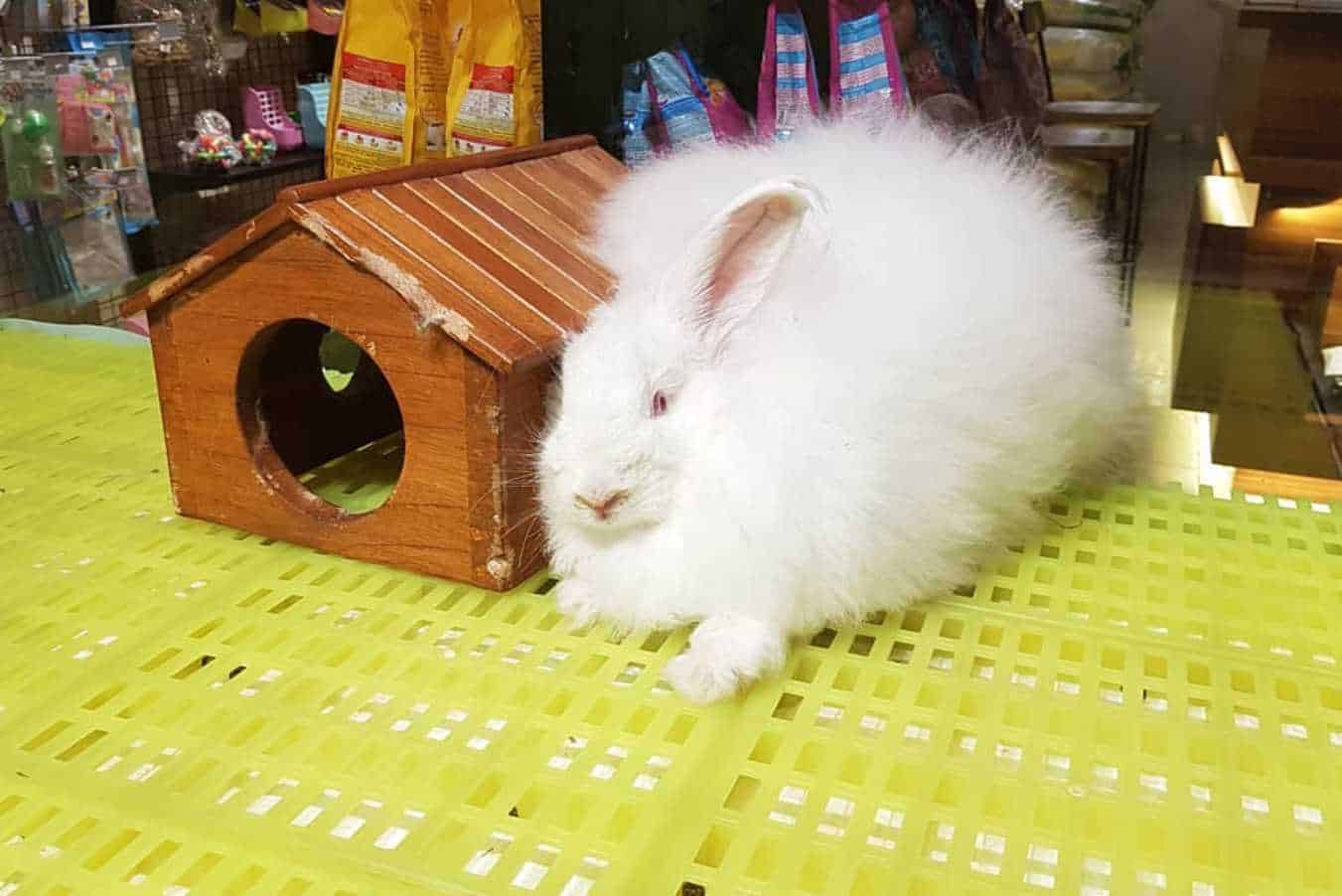 Because you intend to provide excellent care for the Giant Angora, you must consider where the cage should be placed. This animal can be kept indoors and outdoors, depending on the owner’s home.

If you’re using an outside cage, make sure it’s weatherproofed. It should be placed in a shaded region with a roof, walls, and sidewalls that are entirely covered. The front of your home should be protected from snow or rain if you reside in a windy or rainy area.

Giant Angora Rabbits require a larger enclosure than the average rabbit for their huge size. To maintain your Giant Angora Rabbit as healthy and happy as possible, give it an area at least twice the size of the wire cages they were initially raised in for industrial wool production.

Rain-free and draft-free conditions are still required, even if the rabbit is better suited to chilly temperatures. Elevate the cage from the ground by 2 to 3 feet. This will make cleaning a breeze and safeguard you from harm.

How to prepare their sleeping area?

Just make sure they have enough space to dig in their resting place. You can use wood shavings or hay as litter in their beds. Keep their space clean at all times to ensure their comfort. You should not use cedar or pine shavings because they have a strong odor that may harm your rabbits.

How are they fed? 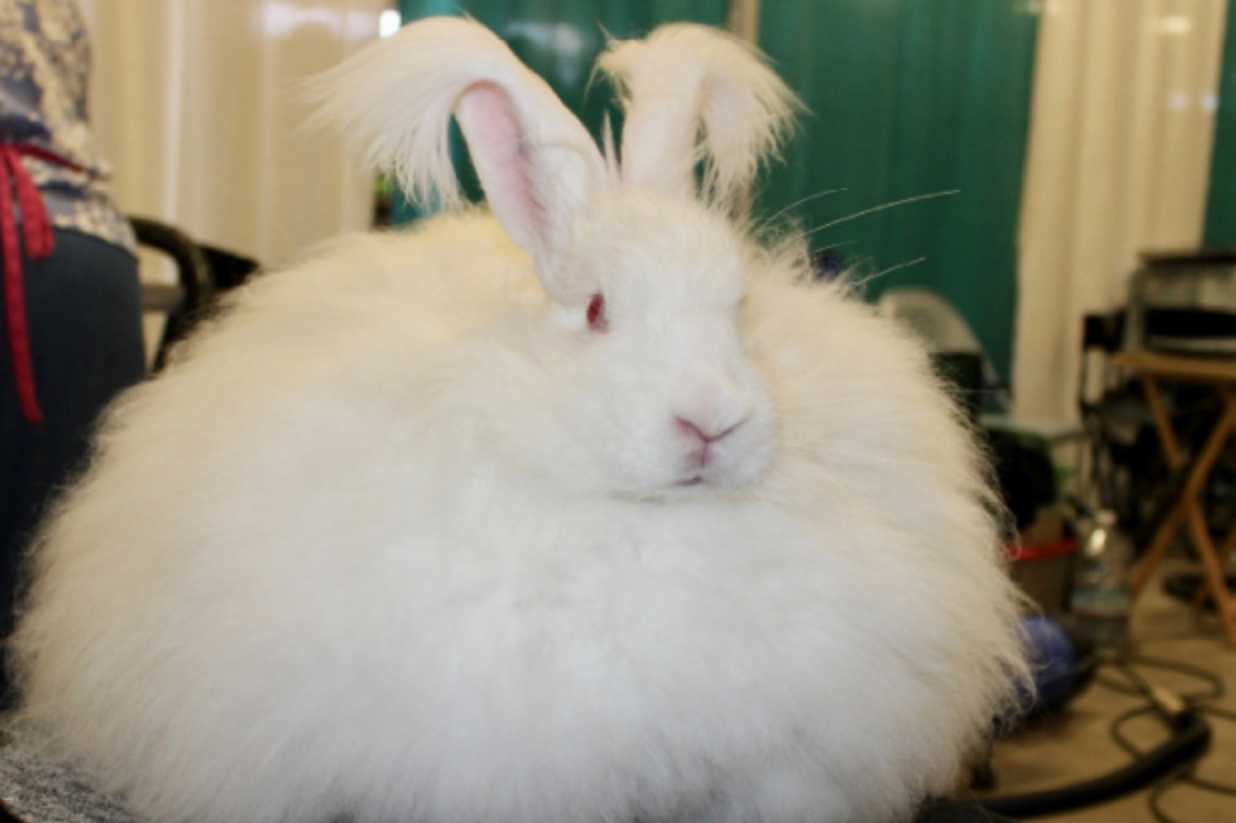 Giant Angora Rabbits were raised to survive on a commercial diet consisting of rabbit pellets with 16-18% protein. If you intend to maintain them as a family pet, numerous supplements are available.

Grass hay can account for up to 70% of their total dietary intake. Additionally, you can give them premium rabbit pellets containing 18% protein. You can satisfy your hunger with fruits and veggies if you’re on a budget.

Take care with the fruits and vegetables you keep in your home, as some are not suggested for your rabbit. Fennel, pumpkin, asparagus, cauliflower, cucumber, and watercress are among veggies that are safe for rabbits.

Additionally, food bowls of various sizes are ideal for the Giant Angora. Metal sifter feeders can also be advantageous when mounted to the cage’s inside or exterior. They can deprive the rabbit of its food. They only need to be positioned high enough to avoid obstructing the rabbit’s floor space. Once a week, clean the food bowl with water and soap.

How to groom them? 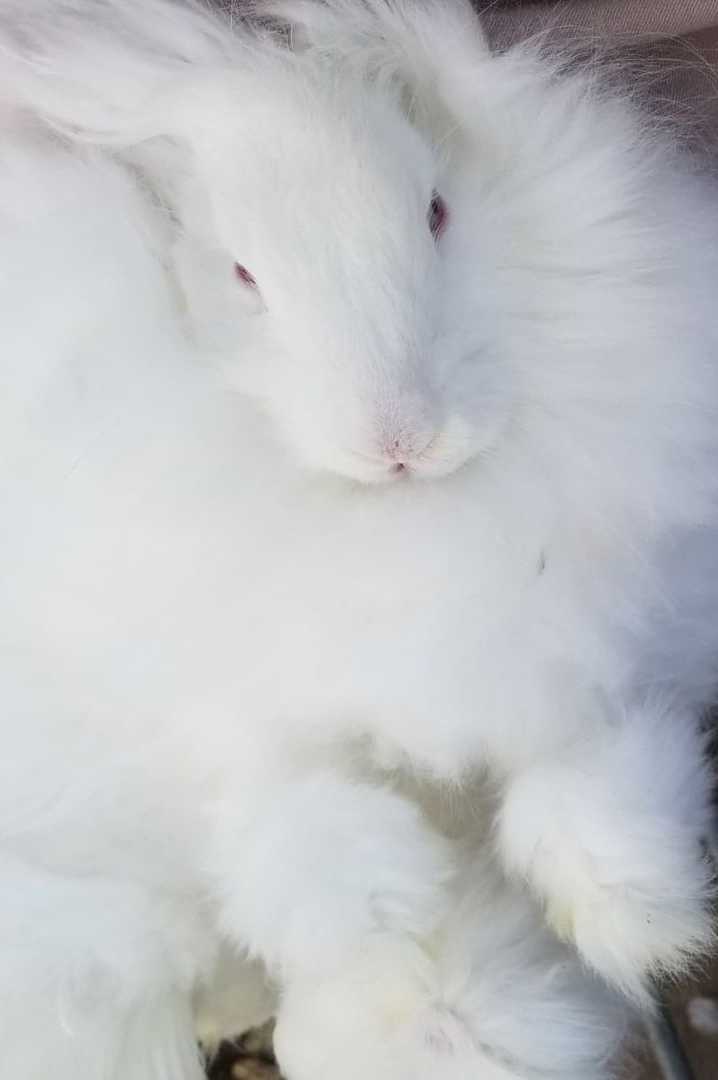 Grooming brushes and small-tooth combs are included with the Giant Angora package. A double-sided comb can be used to collect the wool. Get to any mats that are growing on the skin’s surface. For cutting out the mats, use a pair of scissors and a set of pet nail clippers.

You should also look for a hair blower good at clearing up dandruff, dry skin, and more. Brush the Giant Angora rabbit gently two or three times each week at the most. Grooming regularly is the only way to prevent mats in its hair. It aids in reducing the likelihood of hair and wool blocks coming free.

Maintain the wool coat’s length and density as well. Use a blower and other specialized grooming methods. Keep your rabbit’s fur free of tangles and mats by brushing it regularly.

What are the health issues that they might encounter?

Like all other animals, Giant Angoras can have a long and happy life if properly cared for. However, the Giant Angora is prone to some health concerns. These health problems are primarily a result of their dense coat.

Woodblock is the most common health issue encountered by rabbit owners. Since they have a lot of fur, it is a possibility that they can intake fur that will be lodged in the stomach. If this fur accumulates, they can form a furball that is really dangerous for their health.

Unlike cats, rabbits cannot vomit growing furballs. This may result in your rabbit losing their hunger as they believe they are complete, or it may impede the digestive tract.

This is due to the fluffiness of their coat. Groom them well and keep them out of the sun.

Diarrhea is also a common health issue for rabbits like humans. Rabbits get diarrhea when they overeat fiber from vegetables and fruits. Knowing the proper food and diet is essential to help the rabbit’s digestive system function well. If an Angora has diarrhea, be sure to clean them well so the stool will not stick to their thick fur because that will create another problem for you.

Malocclusion is a condition when the bottom and top teeth are misaligned, preventing the normal chewing process from wearing down your rabbit’s teeth. Dental examinations regularly are crucial. Additionally, you should ensure that your rabbit receives an adequate supply of hay.

Observe your rabbit’s behavior, so you will notice health problems before it gets worse. A regular check-up with the vet also helps you avoid serious health issues in the future. Before purchasing, make sure you buy it from a legit buyer who sells only healthy breeds.

Are they good pets? 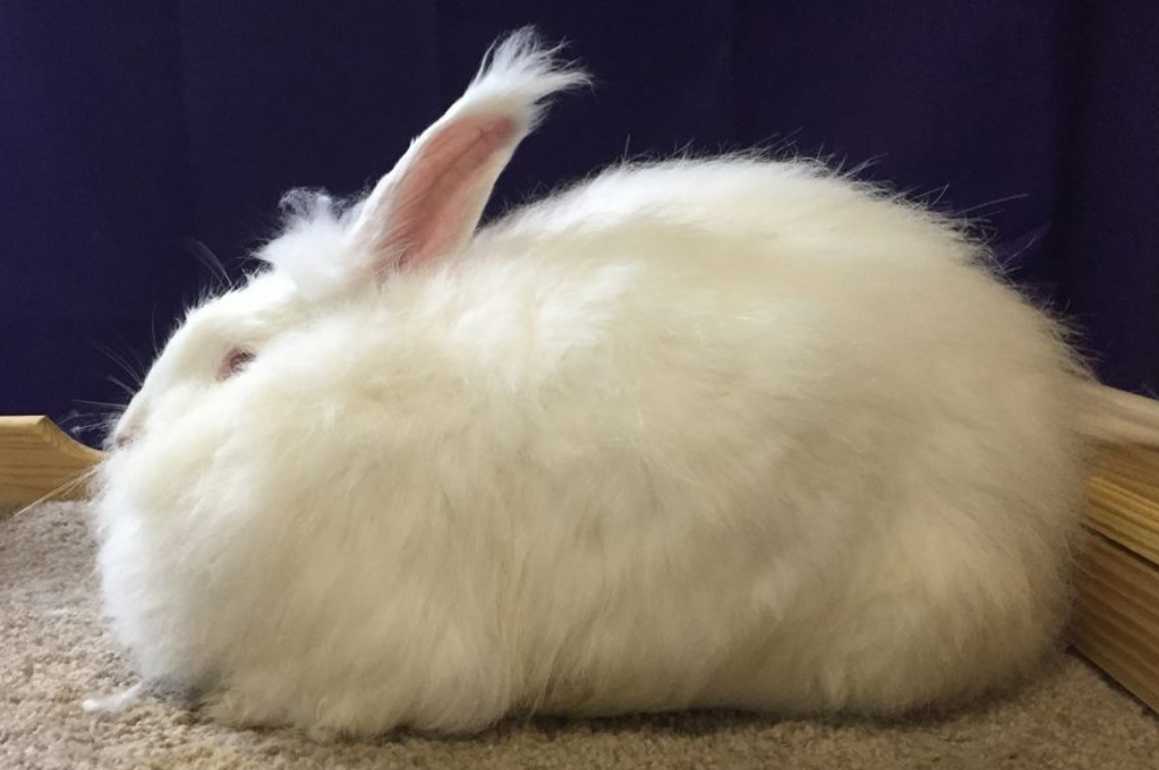 Once attached to you, the Giant Angora rabbit becomes your lifelong companion. They get along nicely with everyone, including children.

However, due to their enormous size, they are not suitable for children who have no concept of properly holding a pet. Children should be monitored around animals and taught proper animal care and handling techniques. Rabbits are capable of biting and scratching.

They are excellent pets for individuals who are willing to groom their fur regularly. They are not advised for inexperienced breeders and owners, and families with small children. They are more popular among enthusiasts, breeders, and exhibitors of Angora rabbits.

How much is an Angora Giant Rabbit?

If you intend to purchase an Angora rabbit, expect to pay between fifty and three hundred dollars. They may be more expensive for pedigreed and show animals than non-pedigree animals. It is preferable to find a breeder who can provide you with a pet-quality rabbit at a reasonable price.

What foods should never be fed to a Giant Angora, and why?

If you already have a Giant Angora, avoid giving it avocados, chocolate, onions, or chives. You should also refrain from giving them cookies, cakes, and other sweets.

Giant Angora Rabbits are well-known in the commercial world for their enormous size and excellent wool production. They are also friendly and considerate pets. These rabbits require more space due to their enormous size, as they can weigh up to twelve pounds.

Furthermore, if their thick coats are not groomed regularly, they can become matted, causing pain and even skin diseases. Grass hay can make up to 70% of their total dietary intake. These rabbits can live a long and happy life if properly cared for.