If you have been eyeing to get a giant chinchilla rabbit, you should first explore their complexities as animals.

Every rabbit is unique and has its personality, and it’s never really the same for each of them. So slowly, getting to know and learning about them can significantly help take care of them. 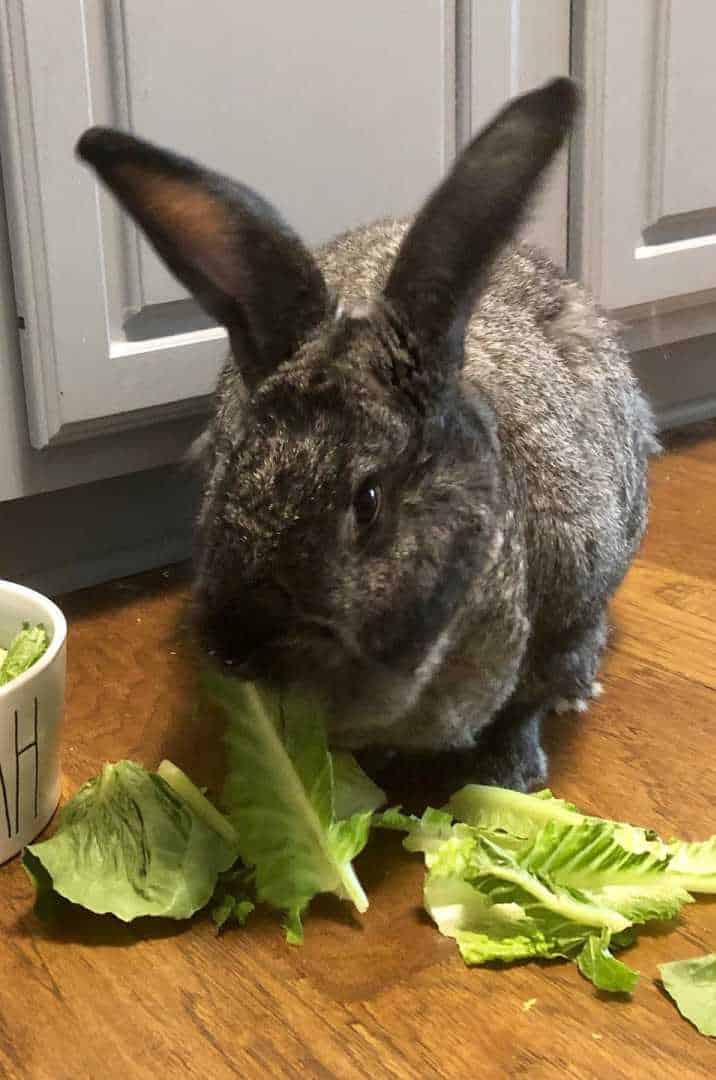 The History and Background Of Giant Chinchilla Rabbit

The Giant Chinchilla came from the United States of America. And as the name might reasonably suggest, this breed shares congruent history with several Chinchilla breeds.

It all started when a breeder named Edward Stahl, located in Kansas City, bought a pair of Chinchilla rabbits immediately. He did this promptly after the progenitor breed was formed.

The first breed was developed during the early 1900s in France. Edwa rd Stahl’s main goal was to achieve a new species, something bigger and better out of its progenitor.

The Chinchilla rabbit has initially been just a single breed. However, the “original Chinchilla” shifted into something new when more considerable rabbit variations were formed.

These rabbits were then dubbed the Standard Chinchilla. Giant Chinchillas were raised commercially in the past, but this has turned into something more intimate.

They now have become a popular pet rabbit breed. They are also included in the “fancy rabbits” lineup, and a lot of Giant Chinchillas also get featured and participate in exhibitions.

Giant Chinchilla Rabbit: How Do These Rabbits Look Like 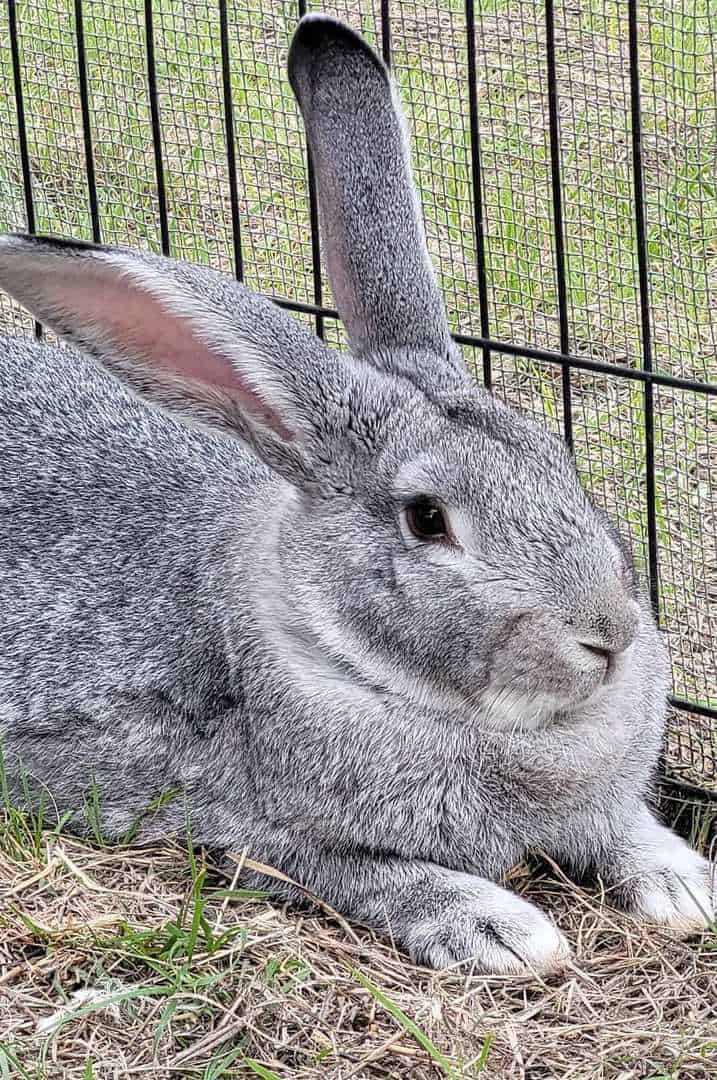 The distinct color of a Giant Chinchilla’s fur is likely to be one of the first things you notice about this rabbit. The Chinchilla family has quite a complicated coat. Their coats are usually with streaks of the following colors:

If you have ever seen chinchillas before, their fur color resembles a chinchilla. Thus, the breed name.

Another thing impossible to miss about these rabbits is their sheer size. This is one of the characteristics that’s difficult to overlook. Their sturdy bodies can weigh nearly 16 pounds, making them a heavyweight in the domestic rabbit world.

They also have a semi-arched body form with strong muscular legs and feet. Another thing about Giant Chinchillas is their delicate white underbelly. A Giant Chinchilla should have medium-length ears, both standing straight and erect.

A Giant Chinchilla matures swiftly. In its early years, they can weigh between 5 and 6 pounds in their 8th week. And they can grow for 7 to 9 pounds at 12 weeks.

Along with their swift growing pace is their size! By the time a Giant Chinchilla reaches adulthood, its existence in a room is unmistakable.

A Giant Chinchillas’ fur is silky and short to intermediate in length. They have a rollback type of fur, which translates to “return of position.” For example, if you happen to stroke their fur in the opposite direction of their hair growth, their fur will be restored to its previous position.

Giant Chinchilla Rabbit and Their Temperament 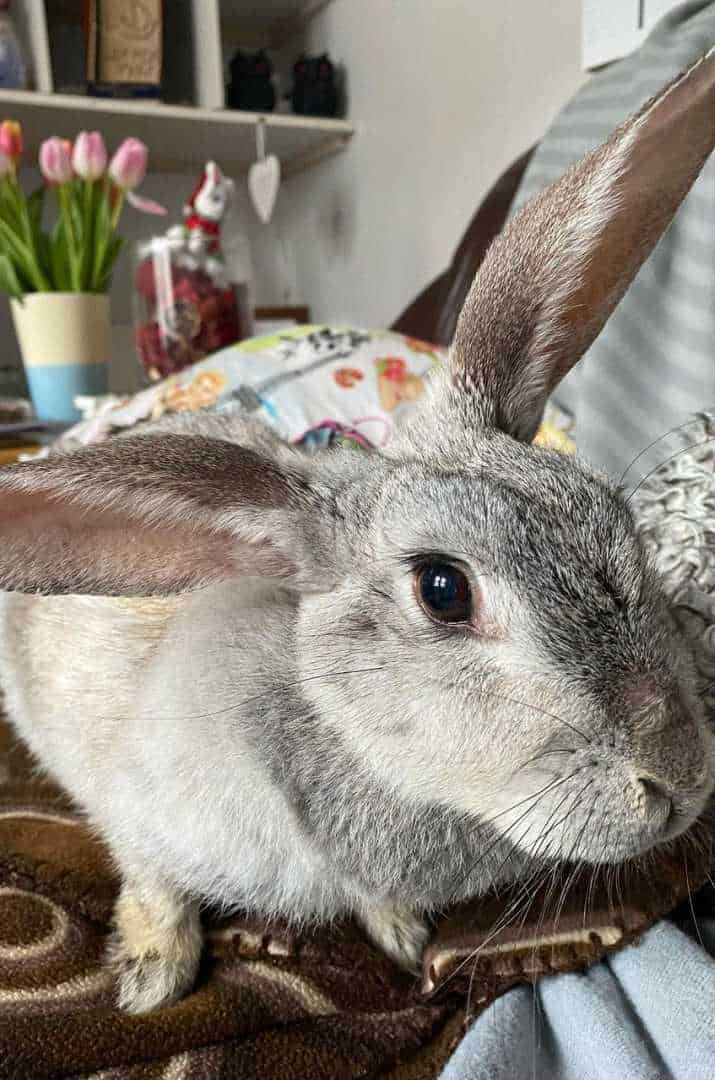 The Giant Chinchilla is known for being a lovable couch potato. They are pretty laid-back and relaxed creatures who don’t require much activity. These rabbits almost only need a comfy spot to recline and plenty of love, attention, and care.

Giant Chinchillas are among the most docile rabbits available for having as pets. And because this species is not particularly hyperactive or lively, it would be a good idea to provide some toys for your bunny to engage with.

The toys could be placed on whether in or out of their cage, or both. You are always free to put some toys in areas they are most comfortable in.

Every rabbit is different, and they are pretty much like humans who have different personalities. This means the trial-and-error will probably be your best friend in raising them. It will help you figure out what your rabbit prefers playing with.

They thrive in stimulating environments, yet it’s generally not a good idea to mix them with little children. They can end up hurting each other when not compatible.

Your rabbit will appreciate being around youngsters as long as it is exposed to them as kittens. If Giant Chinchillas are carefully socialized from a young age, they will grow up appreciating touch and any display of affection.

Some breed experts recommend that these rabbits be raised in adult households or, in other words, families without kids that are under the age of ten.

As probably the biggest couch potato out there, they like to sprawl out in your house, contentedly observing its human go about their everyday activities.

Because of its general gentle attitude and temperament, the American Chinchilla is an excellent pet for diverse types of people; individuals, couples, and the elderly.

Female Giant Chinchillas make loving, caring mothers. However, it’s safer not to expect them to be as extroverted as a dog, and they’re not the same. Like any other animal, Giant Chinchillas should have their own space that their owners respectively.

It’s only fitting for you to respect their personal space. This is especially true when they are still new to the house and adjusting. Give them time and do not disturb them if they don’t want to.

They may try to bite if they are anxious or frightened. Potty training, your rabbit, is considerably more complex than training a cat or dog. This is only normal, but not a big problem.

While litter-training rabbits are more complicated, it is not impossible. You would need more time and patience than litter-training other animals, but it would be worth it. 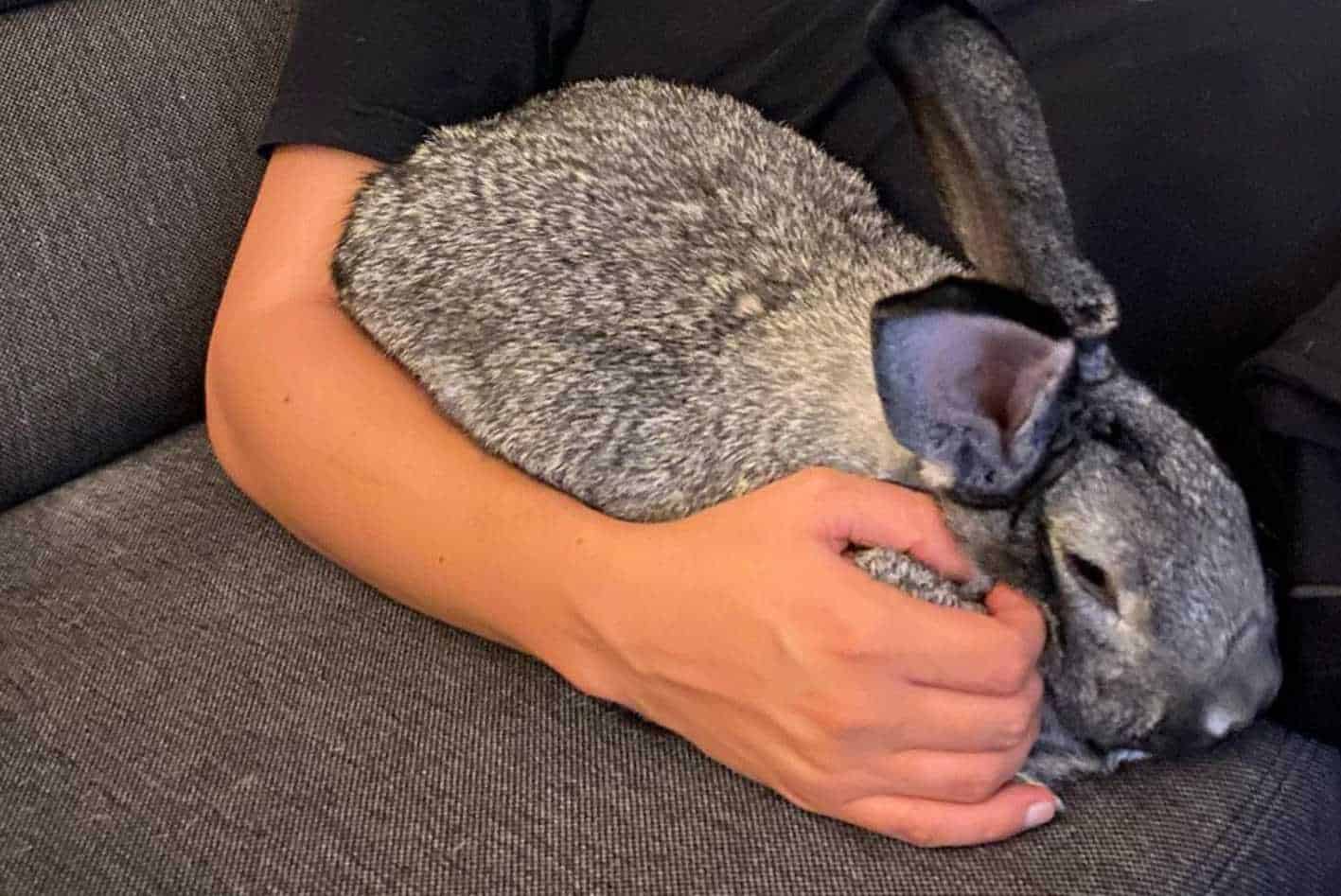 Taking good care of your rabbit, like any other pet, is essential if you want to give them the best life possible. Although Giant Chinchillas are not super vulnerable to hereditary diseases, they can develop various conditions if not adequately cared for.

If you keep your rabbit/s in a cage, make sure that the enclosures are built of galvanized steel. The cage should also include a separate section.

This section would be where droppings won’t get caught in their fur. Without this, your rabbit may be at risk of flystrike, a painful condition th

Due to their bigger size, Giant Chinchillas are more susceptible to health complications if not given the appropriate nutrition and activity. To avoid this, always keeping enough filtered water plus timothy hay on hand is essential.

A rabbit’s digestion is paramount for its health. They need an unlimited supply of these. To round out their vitamin and mineral intake, add daily dark, green vegetables and nutritionally dense rabbit pellets. Here are some rabbit diseases you should watch out for:

This is a fatal disorder. When your rabbit contracts this, its digestive system slows or stops altogether. This can manifest through your pet’s loss of appetite, tiny to no fecal pellets at all, and lethargy are all symptoms. However, if found early enough, it can be cured.

This condition occurs when teeth are misaligned. This condition prevents the natural chewing process. And so, it keeps your rabbit’s teeth from wearing down. Dental checks should be done regularly. It’s essential to make sure your rabbit gets enough hay as well.

If they have been mishandled or accidentally fallen, they can develop back problems, too, so make sure to handle them carefully and avoid rash movements where they could get hurt.

It’s also a good habit to bring them regularly to the vet. This way, any issues can be resolved and spotted earlier on. 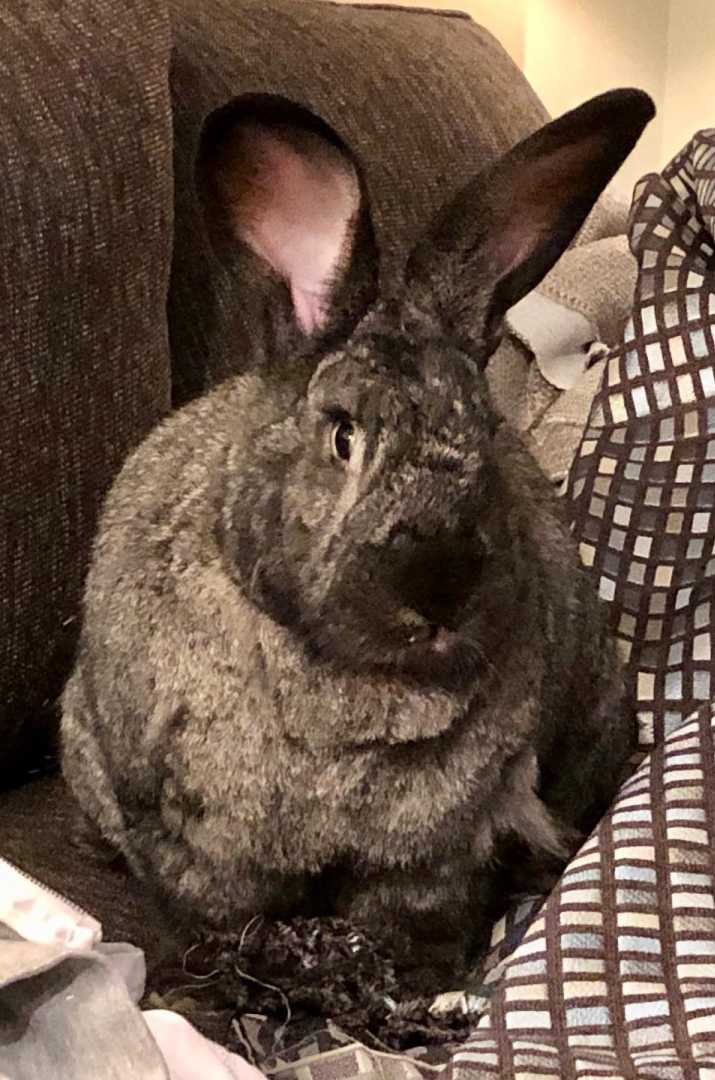 This happens when flies lay their eggs on filthy patches of fur. The egg will then hatch, and they will start devouring your rabbit. Seizures, a lack of listlessness, and skin problems are symptoms. So maintain your rabbit’s rear bumper clean all the time, mainly as they grow older.

These are frequent parasites seen in pet rabbits. If your rabbit is afflicted, you may notice them tossing their heads a lot. When this happens, bring your rabbit to your trusted veterinarian.

If your rabbit seems to be suffering from any pests at all, contact your trusted veterinarian, as they will guide you and tell you how to treat your rabbit.

They will also provide medication per your bunny’s compatibility. Prevention is better than cure, so as much as possible, make sure that the areas they roam about are clean. [Ear Mites in Rabbits: Symptoms, Causes, Treatment, Recovery, Cost, Prevention] 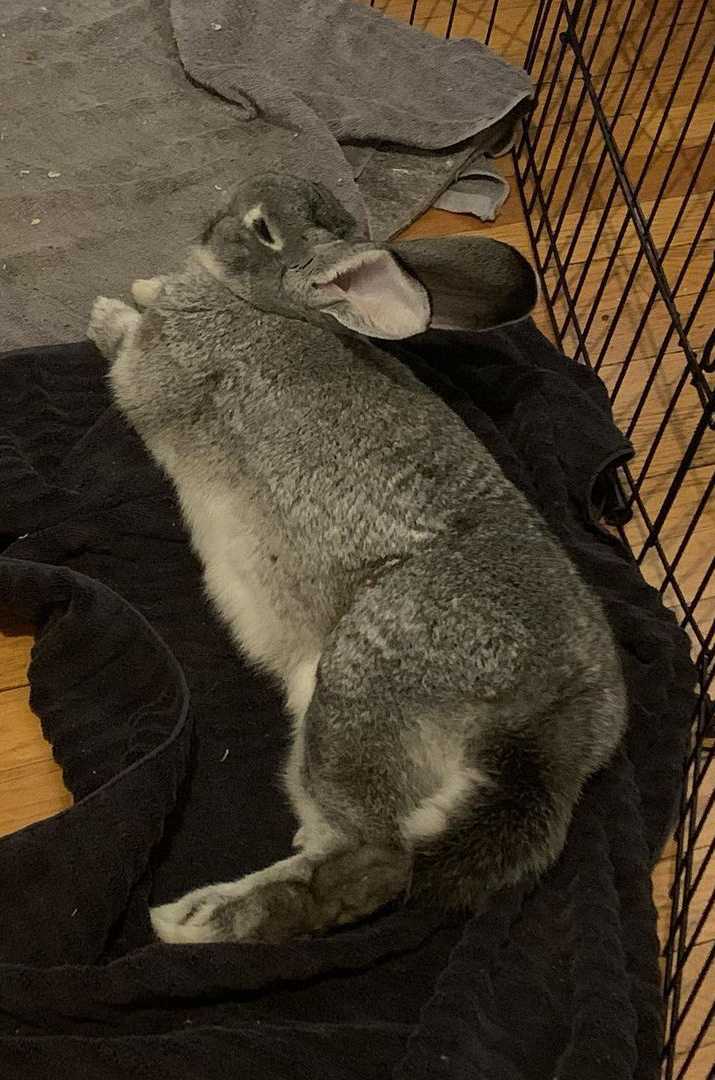 When feeding your Giant Chinchilla rabbit, it’s essential to take note of the critical factors involved in their day-to-day lives. This includes their size, age, and degree of activity.

In addition, it’s always essential to avoid starving them and avoid overfeeding them. Both situations can cause more harm than good to your rabbit.

The food of Giant Chinchillas is similar to that of other rabbit breeds. The leading food consists of hay, pellets, fresh herbs, and greens. It’s important to note that they should have hay and water at their disposal.

Hay is essential because it keeps your Chinchilla’s digestive tract running and wears down its teeth. Digestion is paramount for a rabbit’s health. It’s basically what keeps them alive. Hay should make up approximately 70% of your bunny’s diet.

Despite Giang Chinchillas being a chill and relaxed, borderline lazy rabbit, they need to exercise nevertheless. Therefore, you must provide your pet rabbit with adequate exercise daily to keep them busy and engaged.

You should give them time to free-range and play around every day. Whether it’s outside on your lawn or indoors, the important thing is for them to have their exercise.

Rabbits will relish the opportunity to get out of their hutch and play. This is especially true as they love to spend time with their family. These bunnies are playful, so they are also the type of bunny who will appreciate toys for them to play with.

Toys can help you bond with your puppy rabbit while also keeping them mentally active. With this, you will reduce or prevent them from resorting to destructive behaviors when they are bored.

Rabbits can quickly get thirsty and dehydrated. And so, Giant Chinchillas do not withstand high temperatures or humidity well. Apart from that, they also have difficulty withstanding high temperatures due to their dense fur coats.

Thus, you would need to keep their case or space away from humidity and keep it in a dry place. The optimal temperature for your Giant Chinchilla rabbit should be between 60 to 75 degrees Fahrenheit. Consequently, humidity should be less than 60%.

This is due to their thick, luxuriant coats. Their fur leaves them prone to digestive problems. It’s not healthy for them to groom themselves too often since they have such a big fur area to groom.

Thus, it’s your turn to help. Brush them twice a week for the majority of the year. You would need to brush them three times or more every week during their shedding season.

For their shelter or space personal space, make sure your rabbit has enough space. As they are giant-sized, cages for full-grown Giant Chinchillas should ideally be at least 6 feet in length, like how you would provide beddings for other rabbits.

Having the bottom lined with hay should be okay. It’s recommended that you clean the base every day and conduct general cleaning at the end of every week.

If you happen to be purchasing a Giant Chinchilla rabbit, make sure that you read about them beforehand.

This will make the adoption more meaningful, but it would also help create a solid relationship with your rabbit. The more you know, the closer you can get and play with your pet.