Today will be all about a fluffy and furry rabbit – the German Angora Rabbit! Well, no worries, even if you’re not a big fan of fluff. We believe these little critters would be able to charm their way into your heart anyway.

Without further ado, let’s dive into this rabbit’s fur! 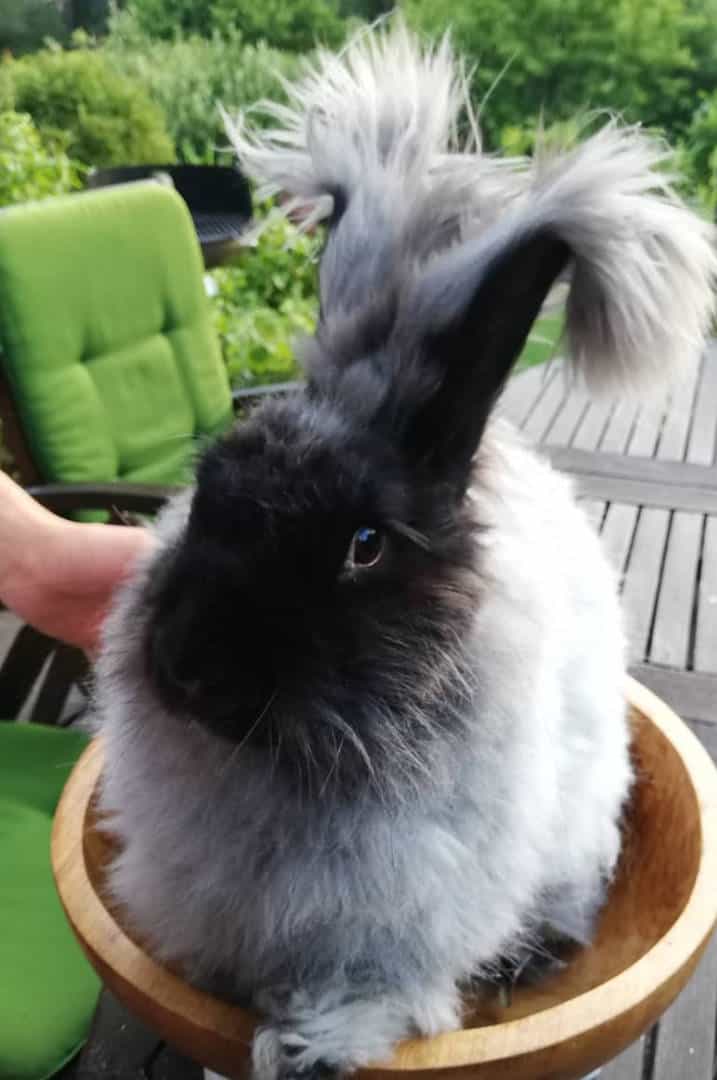 First, let’s have a quick look at this rabbit’s features.

Does the German Angora sound like the rabbit of your dream? Well, read on to get to know this rabbit more! We’ll come back to these things later. So, you don’t have to worry. We’ll explain more about them in a bit.

Brief Background and History of the German Angora 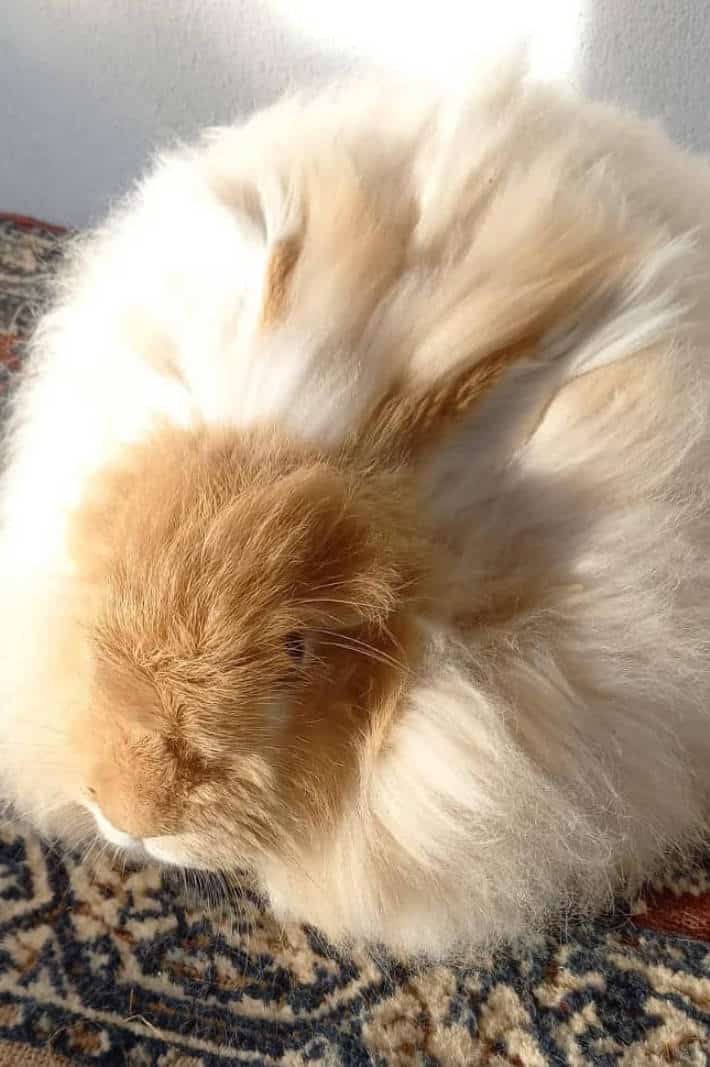 Now, let’s look at the German Angora Rabbit’s history. Where did our furry friends come from? How did they come about? Let’s answer those questions here.

You could say that the need for more fur brought about these furry friends.

They came from the English Angora. Today, these rabbits can give around 200 grams of fur per year. A big difference from the German Angoras. A breed able to give up to or more than ten times that number.

There is a big difference between the two Angoras in the quality and production of fur. Still, the American Rabbit Breeders Association does not accept the latter.

When it comes to appearance, the two do look more similar than different, after all. Despite that, the German Angora does have its own association. The International Association of German Angora Rabbit Breeders (IAGARB).

Breed Standard and Appearance of the German Angora 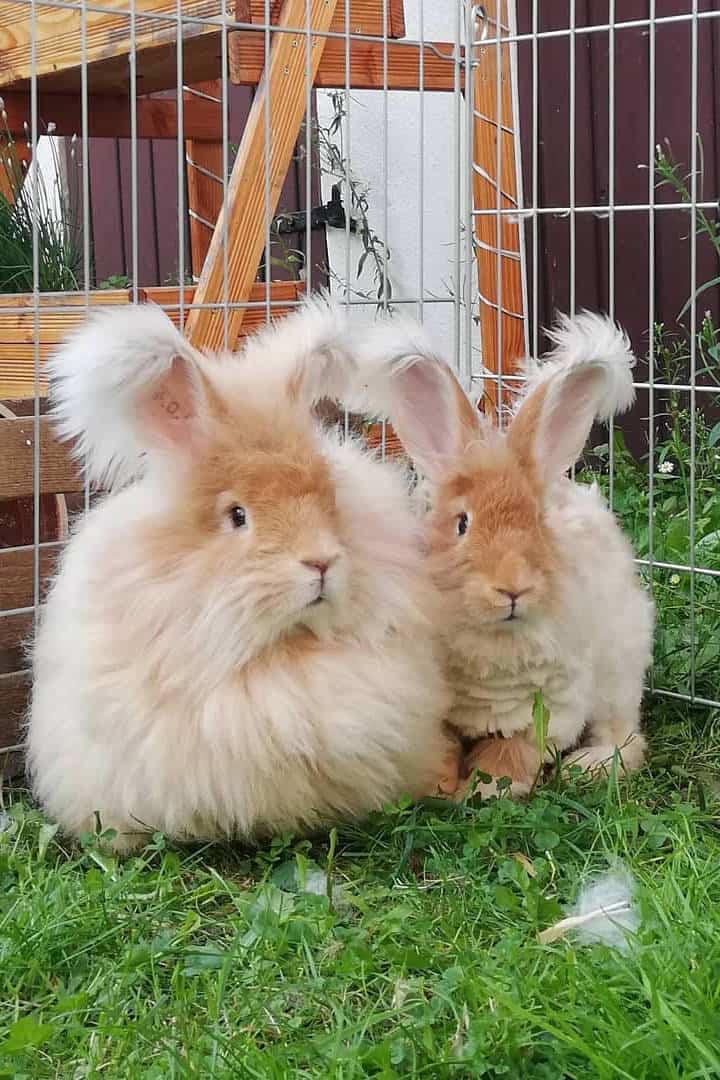 We’ve already talked about looks. With that, let’s talk about the German Angora’s physical qualities.

This rabbit weighs around 7.7 pounds, but it can grow up to 11 pounds. Still, a rabbit needs to be at least 5.5 pounds to fit the breed standard. Generally, rabbits weigh around 6 pounds. As you can see, these numbers put the German Angora on the heavier side of the scale.

As you might expect, this rabbit looks like its Angora brothers and sisters. Maybe, a little more like the English Angora from where it came from, though. On the other hand, it also shares similarities with the Lionhead. (Note that this breed is not part of the Angoras, though.)

There are many colors of the German Angora. White seems to be one of the crowd favorites, though.

It might be the best time to note that IAGARB has said there are still many colors not listed on their list. You might happen to see a color not listed here or on the color guide of the IAGARB. It doesn’t already mean the society doesn’t accept it. It only means it is not a common color.

Do you want to learn more about the listed colors? You might want to check the IAGARB’s Color Guide then.

Personality and Temperament of the German Angora 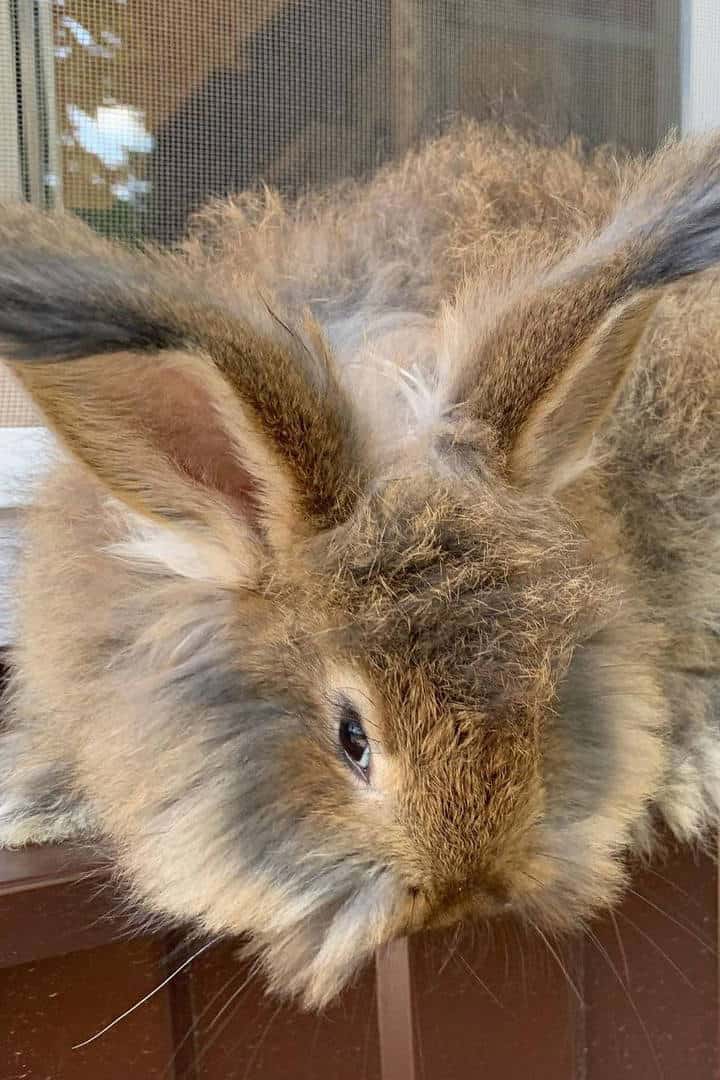 Okay, so they look cute and cuddly. Does that mean the German Angoras are? Let’s find out!

Generally, these rabbits are friendly and social. As long as you handle them with care, these rabbits will let you touch and carry them. So, yes, you can cuddle with them!

Rabbits, generally, can exist with other animals. The German Angora is one of those rabbits. Socialize them early. Add some proper introductions and some patients, and tada! You have the ingredients to let your bunny mingle with your kids. Even your other pets!

As we’ve already said, these rabbits are generally friendly. Still, they might not be the best pets for your kids, though.

These bunnies are crepuscular creatures. That means they’re often active during dusk and dawn. They’re most energetic when the little ones are asleep.

Health of the German Angora

These rabbits are not immune to health issues. In this part, let’s talk about the German Angora’s health.

These rabbits can live up to 7 to 12 years, which is not all that far from the general lifespan of rabbits. They are, overall, a healthy breed. Still, as we’ve said, they’re not without any health issues.

We’ll let you know about that in a bit. For now, let’s talk about a problem you’d want to be aware of if you’re thinking of bringing a fluffy German Angora home.

GI Statis is most probably the ailment German Angoras are most prone to.

Simply put, GI stasis is the slowing down or complete stop of the passage of food in the GI tract of our furry friends. It may not sound that serious, but this illness could be deadly.

As you can see, knowing what it is is essential. That is, along with detecting it and learning how to deal with it. Ultimately, preventing it is also important if you want to have a healthy and hopping bunny on your hands.

Now, you don’t have to worry! We have an entire section dedicated to all of that. 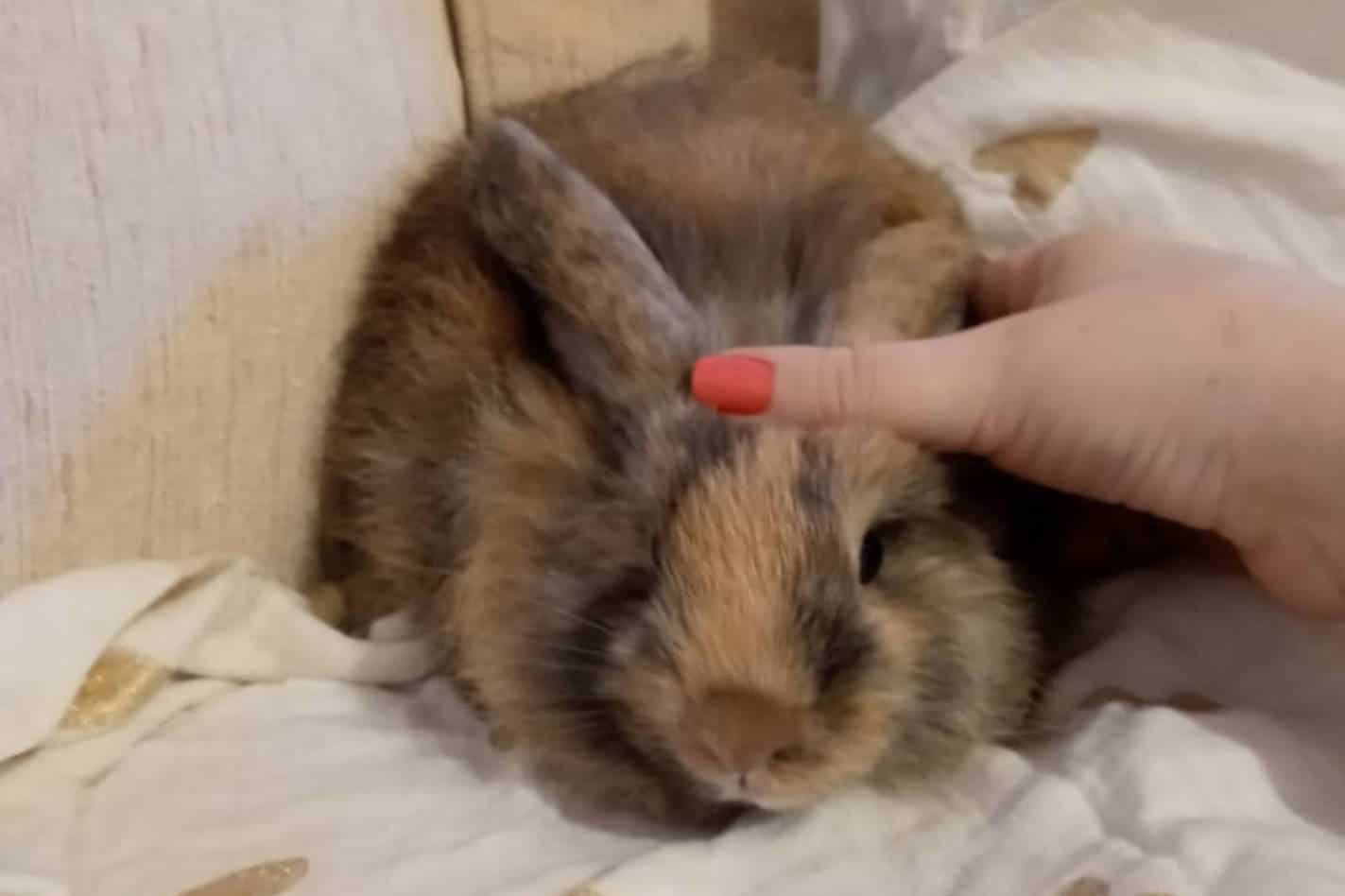 If left untreated, GI Stasis could be fatal. That’s why we’ve set up a whole section just for this.

First, let’s talk about how it could happen. As you might have already guessed, it has something to do with your rabbit’s fluffy fur.

The German Angoras swallow their long locks when they groom themselves. In turn, their fur could pile up and become enough to cause a blockage.

Now, let’s talk about how you can detect it. After all, our little friends can’t just tell us if they feel sick.

The detection of this sickness could or could not be simple. It would depend on the signs that would show with your bunny. One of the signs is lethargy.

Your little friend could also stop eating and drinking too. Constipation and gas could also be a sign. It is their poop that could be the biggest giveaway, though. Seeing small and dry poop with hair or fur is a good sign it’s time to take a visit to your bunny’s vet.

Next, let’s talk about treatment.

There are several ways you can treat GI Stasis at home. For one, you can use medication like cisapride or metoclopramide. We highly suggest consulting with your rabbit’s vet before doing so, though.

Finally, let’s talk about prevention. After all, it’s better if we could prevent the suffering of our furry friends. First, you want to provide your German Angora with lots of hay.

Also, proper grooming is a must to avoid this problem! We won’t talk about this matter here as we’ll be discussing it in the next section. Keep this preventive measure in mind, though!

Also, you want to avoid stressing your little friend. Lastly, you should also bring the little one for regular vet visits.

Now, let’s talk about how you can care for your furry friends. You might be surprised. As you will see in the next parts, German Angora Rabbits are not difficult to care for!

The diet of the German Angora is not that different from the average rabbit. You want to give them lots of hay and water. Also, you could supply them with pellets. Treats could also be good, but not a lot of it.

It might be the best time to note that your rabbits can’t eat everything that you can. Before introducing any food, you might want to do some research first. Some food could be harmful to your bunnies. Take avocados, for example.

Do you need help building a list of treats your bunnies could eat? You might want to check out our other talks.

Exercise: How Much Should a German Angora Exercise? 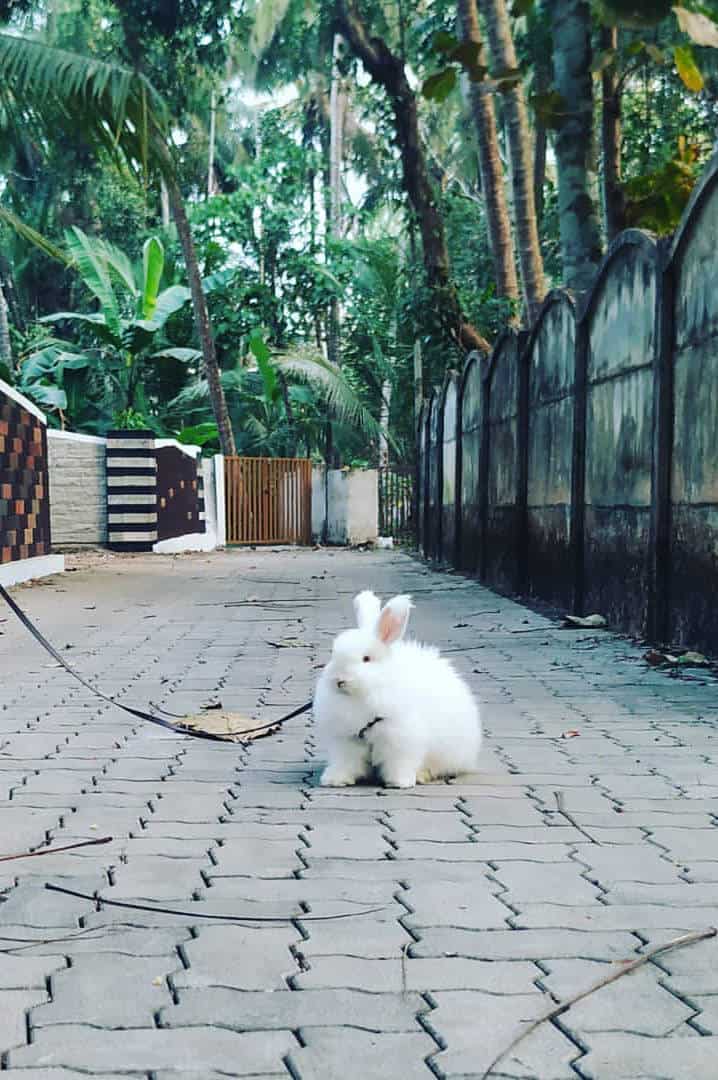 Generally, rabbits should be able to exercise when they want. Ideally, though, they can at least get 3 to 4 hours of exercise. The longer, the better, though!

With that, you want to give your rabbit room to roam. Some toys won’t seem to hurt too!

You might want to keep a close eye on them when they’re active, though. German Angoras could overheat due to all their fur. Having their water nearby could also be a good idea to avoid this.

Enclosures for the German Angora

First, you want to keep in mind that the German Angora leans toward the larger side of the scale. This furry friend would need a larger cage or crate than others.

To add, if you plan to let your bunny out, make sure its pen is secure enough. That is so nothing can come in or come out without you noticing. Your little friend might get lost, after all. Also, we don’t want predators getting to our bunnies!

Lastly, you also want to secure the area for extreme temperatures.

You might think taking care of these guys could be lots of work because of all their fur. Well, they do have a lot of it, but you might be happy to know that they don’t shed!

There’s really only one thing you want to keep in mind when it comes to grooming. In exchange for the lack of shedding and brushing, you have to shear your German Angora every 90 days or so. If not, things will get out of control, and their fur would inadvertently matt.

Also, keep in mind that you don’t want to bathe your rabbit unless needed. In this case, try only wetting the parts that need cleaning. On the other hand, you might even want to go for a dry bath instead!

How to Handle German Angoras 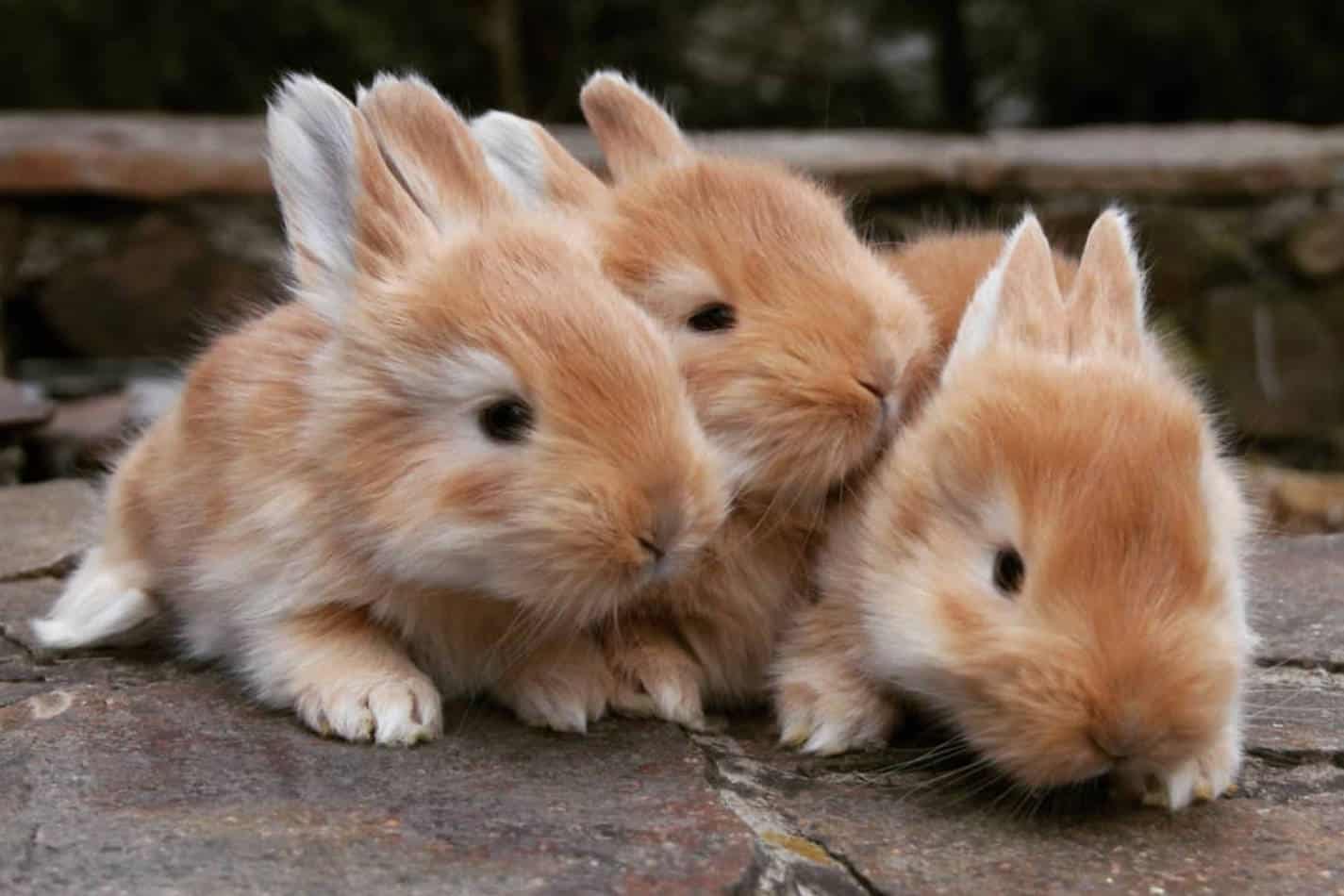 Finally, let’s talk about how to handle your German Angora bunnies. If you remember, we said that these rabbits are best for adults and school-age children.

You might also recall that we said these little critters are also a friendly bunch. So, you might be wondering why they’re not suited for toddlers and very young kids.

Well, it’s more for the safety of these rabbits.

As you already know, these rabbits have long locks. While they could be great companies, it won’t be fair if the other party would play rough! Toddlers could accidentally pull on our furry friends’ hair a little too hard.

In turn, this action could hurt them. Now a threatened rabbit could attack. As you can see, they could both injure each other.

If you plan to introduce your rabbit to a kid or anyone at that, make sure they would handle your rabbit gently. With that, it might be a good time to note not to overwhelm your rabbit! You might not want to leave them alone with an overly excited bunch.

When it comes to mingling them with other pets, you only want to do this if the other party is well-behaved. It is not a good sign if it chases your rabbit nonstop.

Not only could this stress your rabbit, but running away from them might also injure the little one. Remember, they have long locks. They could trip on their fur a little like how we could trip on our laces.

Today, we talked about the German Angora Rabbit. We dived into all the fur and got to know this cuddly critter up close. We got to know their charms and just how much of a charmer these rabbits could be!

We hope we got to help you get acquainted with the German Angora. If you’d like to meet other rabbits, then hop on to our other discussions!