A rabbit is one of the cutest animals in the world. Seeing one or more would certainly bring delight to your face! And if you happen to see a Checkered Giant Rabbit, don’t be surprised if it becomes your new favorite animal!

The Background And History 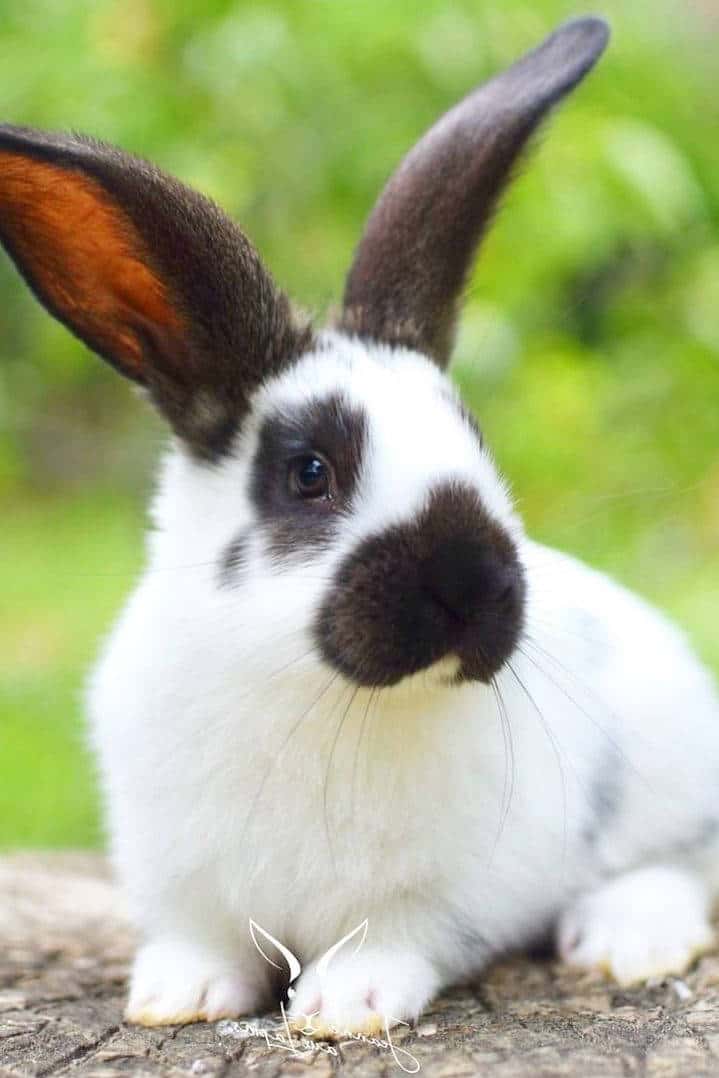 If you have any plans of getting a pet rabbit, there are so many kinds for you to choose from, including the Checkered Giant Rabbit. Before you even consider this breed, perhaps it would be great to get to know it a little deeper.

The Checkered Giant Rabbit originated in Europe, to be more specific, France. It’s believed that this breed came from the Lorraine region of the country.

Since then, breeders all over the world have included the Checkered Giant Rabbit in their domestic rabbit roster.

Not all rabbits are created equal. As cute as they are, there is more than meets the eye. Don’t be surprised if they get even more endearing as you get to know the Checkered Giant Rabbit a little deeper. 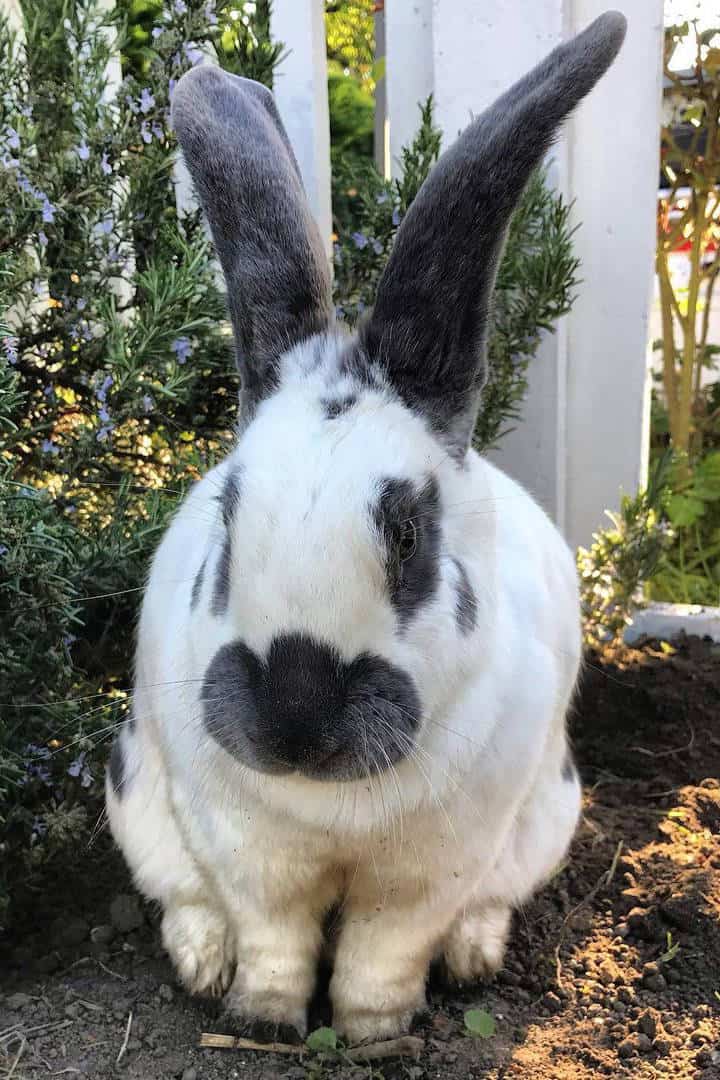 In terms of weight, they are also heavier than other breeds. While there are no maximum weight figures, the minimum weight is around 5kgs for the males and about 5.4kgs for the females. They have a prominently large head and broad ears.

If you look at it more closely, you can see just how long and slender their body is. And this is supported by their long legs. Their fur falls between short to medium length.

They have a white coating highlighted with blue or black colored markings. They also have butterfly-shaped black or blue markings found on their noses.

The Checkered Giant Rabbit is just one of the few breeds with unique markings that the American Rabbit Breeders Association has accepted. 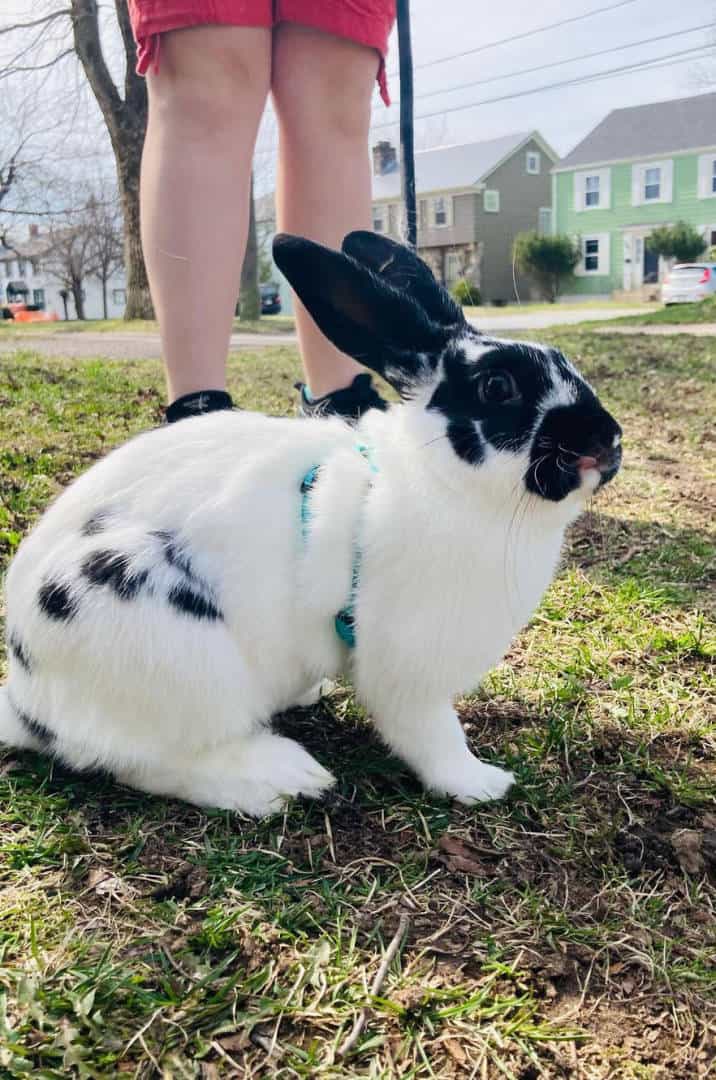 Before you consider the Checkered Giant Rabbit as a pet or as a show bunny competitor, you might want to get to know its nature, disposition, temperament, and a whole lot more.

It’s no question that the Checkered Giant Rabbit looks great. However, you also need to know its personality before you do anything with it.

If you are looking for a clingy and showy rabbit, the Checkered Giant Rabbit might not be the one for you. However, it doesn’t mean they won’t make good pets.

If they feel like it, they will muster the courage to cuddle you or get close to you. Their energy level is unmatched! They would love to play around inside and outside your home.

Given their size, the Checkered Giant Rabbit needs a lot of exercises. If you leave them just lying around, especially after feeding them well, they might gain a lot of weight.

What Are Health Issues and Treatments? 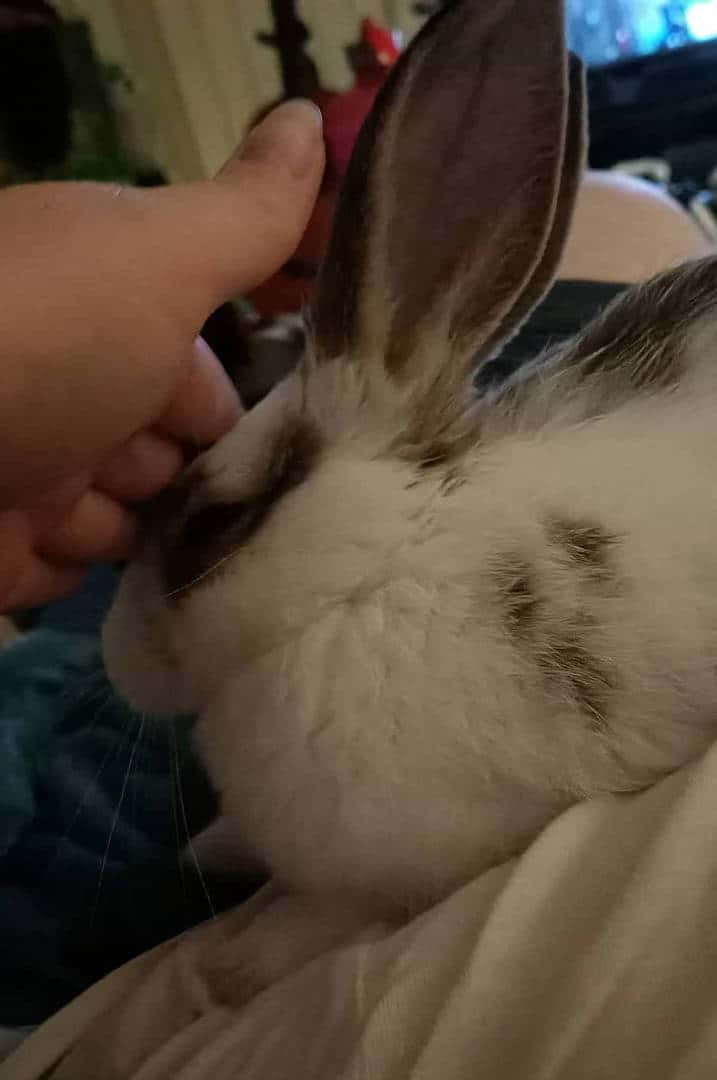 If you have made a connection with your Checkered Giant Rabbit, you want them to live a healthy and happy life.

However, make sure you are familiar with some of the health issues that plague their breed. It’s better to know these health concerns so that if ever something happens, you know what to do!

GI Statis is one of the major health issues that rabbits, Checkered Giant Rabbit, have.

The Checkered Giant Rabbit is a herbivore. It means that their diet consists mainly of plants. Despite consuming food enriched with lots of vitamins, minerals, and nutrients, their digestive health can still be compromised.

If they go through GI Statis, their digestive system moves rather slowly, causing the build-up of bad bacteria in the guts. When this occurs, it can cause bloating and other discomforts in the rabbit.

It can lead to the loss of appetite, potentially dehydrating the rabbit. If something like this occurs, it can endanger the rabbit and cause serious complications, including death.

There are a couple of reasons why a rabbit develops GI Statis. One of the reasons could be their high starch and low fiber diet. If a rabbit is not eating enough fiber, it could trigger the development of this condition.

It’s your responsibility as the Checkered Giant Rabbit owner to make sure that they are eating the right kinds of food.

There are also other causes of GI Statis. Rabbits, just like human beings, also go through stress. If, for example, they have lost one of their mates, this can affect their overall disposition.

If you move them to a new place, they might go through a slump. While other rabbits get accustomed to their new environment, there might be some who won’t be able to. It’s up to you to create a comfortable and happy place for them.

If the Checkered Giant Rabbit goes through GI Statis, you should check if they have any underlying health issues. If they do, then it can cause GI Statis. Don’t forget to take your rabbit to the veterinarian.

A rabbit’s teeth never stop growing. Throughout their lives, their teeth would continue growing and growing. Eating a lot of fiber-rich food usually helps with wearing the teeth down. However, there’s a different issue if there is a misalignment in the Checkered Giant Rabbit’s teeth.

If there is misalignment, it would be hard for the rabbit to wear their teeth down. And if their teeth keep on getting longer, it becomes uncomfortable and makes eating difficult.

If the rabbit has buck teeth, it can cause infection and pain in the jaw and the rest of the mouth. Some rabbits are born with this condition. However, some rabbits develop this health concern due to their diets and other factors.

Make sure you check the teeth of your Checkered Giant Rabbit from time to time. If there are any abnormalities and red flags, take them to the veterinarian as soon as possible.

If the Checkered Giant Rabbit does have malocclusion, never attempt to trim or cut their teeth. Instead of helping the rabbit, you are making it much worse. It’s better to send the rabbit to the vet so professionals can take care of this matter.

No pet owner would wish anything ill towards their beloved pet. However, you have to be wary of other health issues that the Checkered Giant Rabbit might encounter as they grow up.

Some rabbits might have some health conditions that they might have gotten while in utero or as babies. There might also be some issues that would arise from different factors such as home environment, predators, and many others.

If the Checkered Giant Rabbit displays any sort of discomfort, then you should speak with a vet or take them to a pet clinic.

How Do You Take Care Of A Checkered Giant Rabbit? 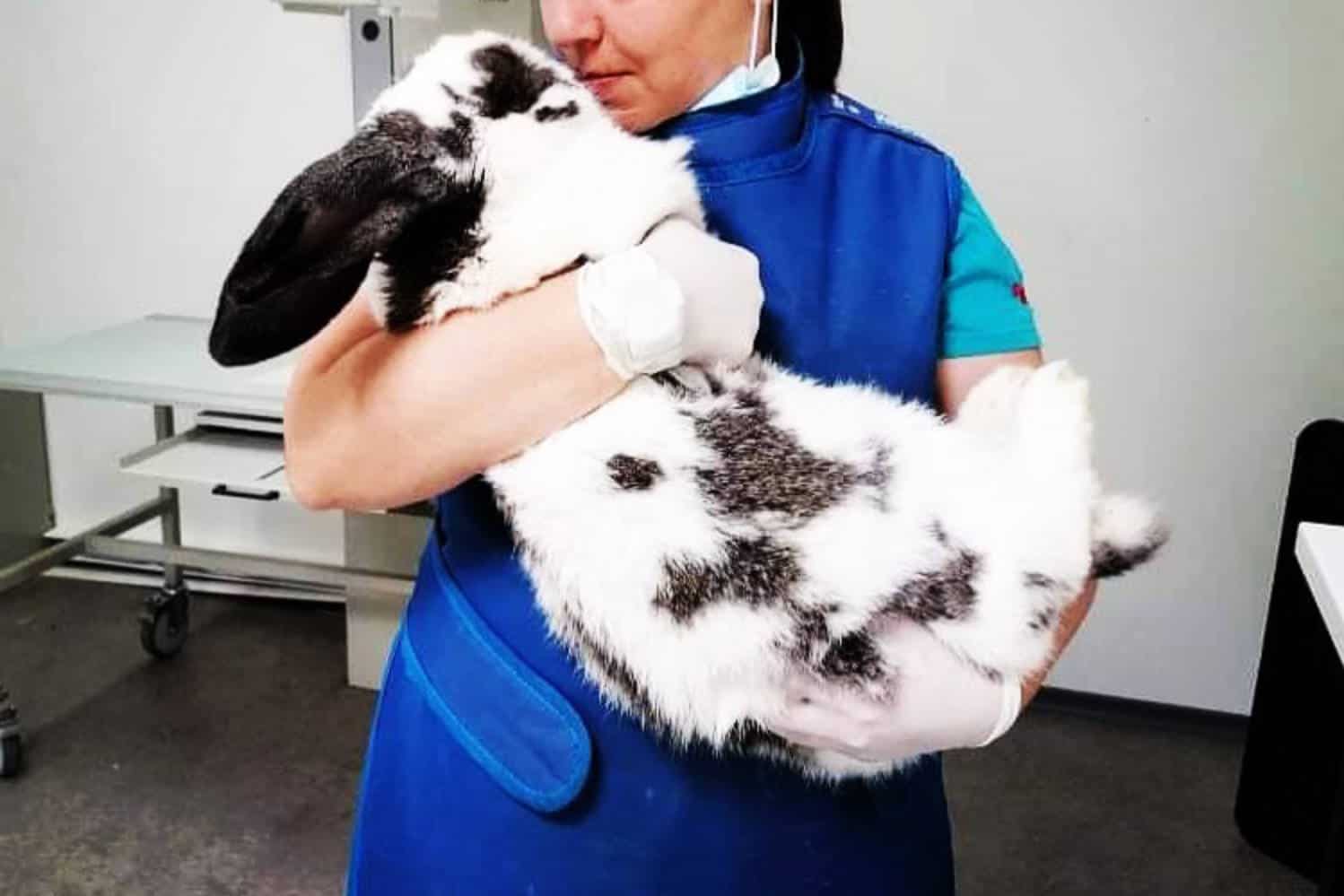 If you have a Checkered Giant Rabbit at home, taking care of them involves a lot of responsibility. If you know how to take good care of them, they will live well and thrive happily.

Here’s some good news! Checkered Giant Rabbit doesn’t require a lot of grooming. They can take care of themselves in this aspect. You just need to brush their fur at least once a week. If you have more time, make it twice a week.

If you want to make their furs shiny and smooth, then invest in a good brush and take time to groom them.

If it’s a molting season, grooming the Checkered Giant Rabbit should be done more often. During this period, they shed their old fur. Grooming them more frequently during this time would help prevent the ingestion of the said fur.

Since the Checkered Giant Rabbits are big and active, they need a lot of space to move around. If you have a backyard or a garden, then that would be the perfect place. You can set up a cage or a hutch for your furry friend.

You can still keep the Checkered Giant Rabbit indoors. They might have limited space to move around but they would be protected from the elements and from other potential predators.

Just make sure that you keep them away from important stuff in your home or else they might end up chewing them.

If you got yourself a baby Checkered Giant Rabbit or what is also known as a kitten, keep them warm and dry. You can add a lighting fixture in their enclosure.

As for cleaning the cage or hutch of your Checkered Giant Rabbit, try not to use any home cleaning products. They might contain ingredients that could be dangerous or toxic to the rabbits.

Stick with a more natural cleaner like lemon. There are probably other cleaning agents that you could use that won’t cause any bad effects on the animal.

They need a well-balanced diet consisting of various things like pellets. You can add fruits and vegetables to the mix. But since most of them have high sugar content, it should be done only occasionally.

The Checkered Giant Rabbit might gain more weight, and affect their overall health.

Apart from giving them healthy food adequately, the Checkered Giant Rabbit should also have water by their side at all times. Since they eat a lot of fiber, they need something that helps regulate their digestive tract.

Water keeps them from dehydrating as well. If the rabbit is dehydrated, it can either be the cause or effect of a health issue that needs to be addressed as quickly as possible. 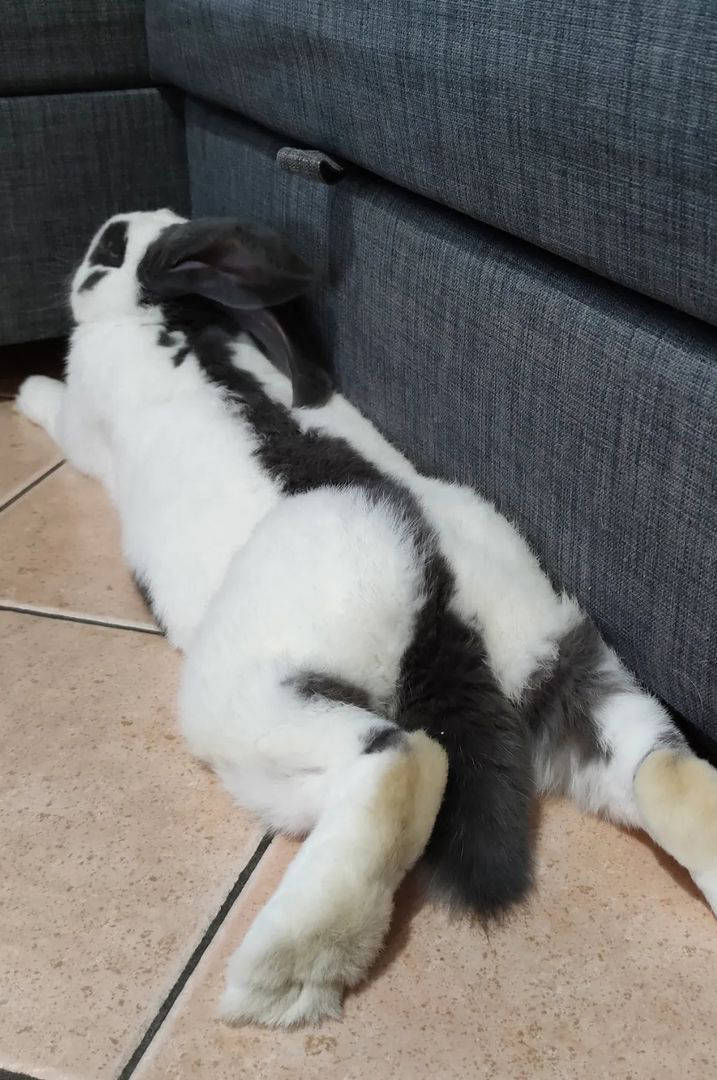 Taking a rabbit from the wild is not an ideal scenario. If you want a rabbit for a pet, go check out a rabbity near you. If they have a Checkered Giant Rabbit available, then it must be your lucky day. Take advantage of that and take that bunny home!

Going to a reputable Checkered Giant Rabbit has many advantages. Since they know how the rabbit came about, they can tell you all about the breeding process.

They know about the Checkered Giant Rabbit’s history, personality, and so much more. Knowing all these things would make it so much easier for you to take care of the rabbit.