Like other animals, rabbits experience normal hair loss, usually referred to as shedding. During spring and when it’s almost summer, your rabbit will lose its heavy winter coat to keep cool during the summer.

However, when you notice your bunny abnormally losing hair out of season, you should be worried and find out why. Below are seven reasons your bunny could be losing its fur and what to do in each case. 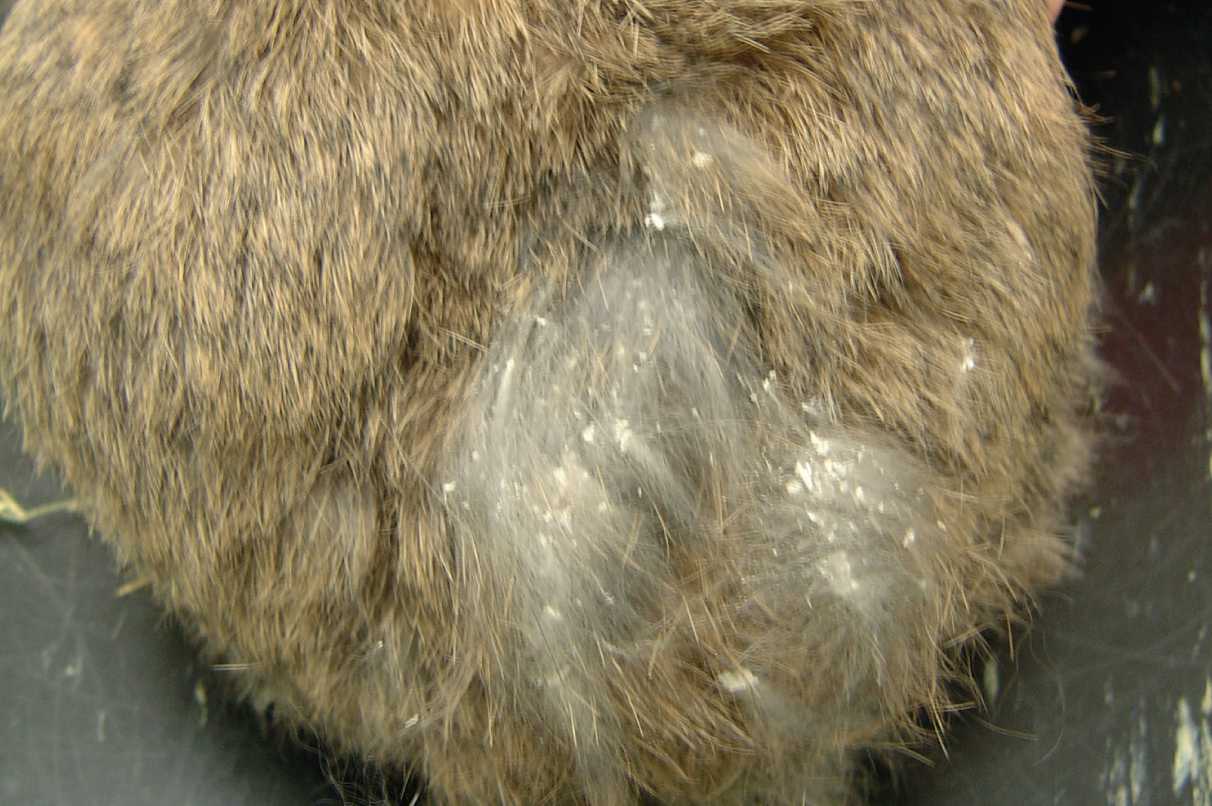 One of the many reasons your bunny could be experiencing abnormal hair loss could be due to parasitic infections.

If they have a parasitic infection, it could lead to severe itching, which would, in turn, lead to your bunny scratching its body so hard that its fur falls out. Several parasites could infect your rabbit and leave it very itchy and uncomfortable. Some are:

This is a form of ear mites that causes ear cankers. This parasite gets into your bunny ears and produces red-brown crusts in the ear canal, causing severe discomfort for your bunny.

The more the crust, the more the pain and discomfort your bunny feels. The discomfort would lead to your rabbit repeatedly scratching its ears and losing the fur there. [Ear Mites in Rabbits: Symptoms, Causes, Treatment, Recovery, Cost, Prevention]

This is also called fur mite. It is usually classified by the presence of dandruff-like flaking on the fur. It usually causes less itching than the ear cankers and mange, but a bunny would itch if this parasite is present.

The flaked fur will eventually fall off if not treated in time, leaving behind bald skin.

Mange is caused by the mite Sarcoptes scabiei or all other Sarcoptes species. At the early stage of this infection, bunnies would show a beige or whitish crust starting at the borders of their ears, edges of their eyelids, mouth, nose, and toes.

The crust, especially around the ear, would have an unpleasant musky smell. If left untreated, the crust would cover more areas of the body, causing a lot of itching from your rabbits and would lead to fur falling off.

If you suspect your bunny has a parasite infection, you should take it to a vet to be looked at. 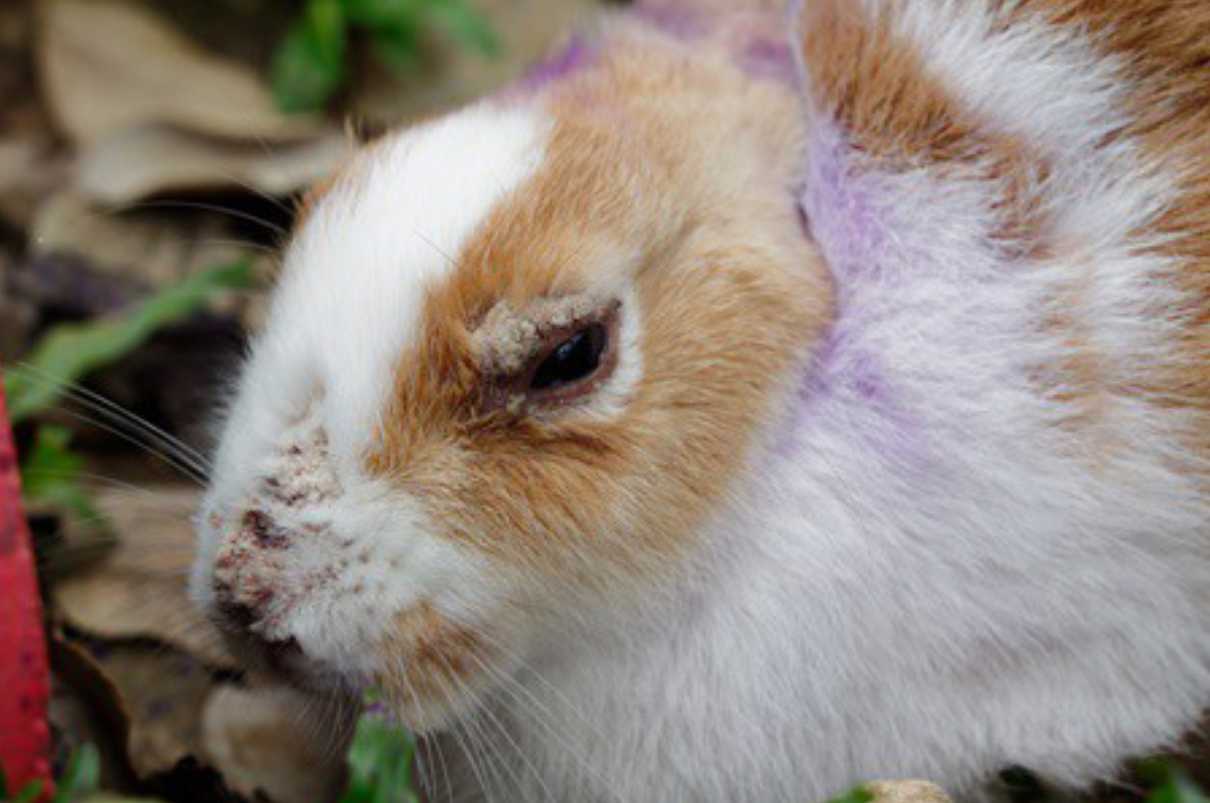 Rabbits are commonly known for their overgrown teeth. Their teeth continuously grow, so they need to be trimmed by a vet or constantly nibbling on roughages.

Their ever-growing teeth could become a problem if they don’t get enough roughages or fiber to nib on since rabbits often groom themselves. Your rabbit could pull out large chunks of fur when it tries to groom itself with its overgrown teeth, leaving behind a patch of hairless skin.

Also, dental problems can cause drooling and teary eyes, and wet patches around the mouth, chin, and eyes. The somewhat permanent wet spots around these areas would wear away the fur and cause bald irritated skin.

Take action when you notice that your bunny’s front teeth are noticeably sticking out. To confirm that it’s a dental issue, check for signs of teeth grinding, reduced appetite, diarrhea, and a dirty bottom, among other things.

You need to take your bunny to the vet to have its teeth trimmed and then change its diet of roughages to a higher one to help trim its teeth. 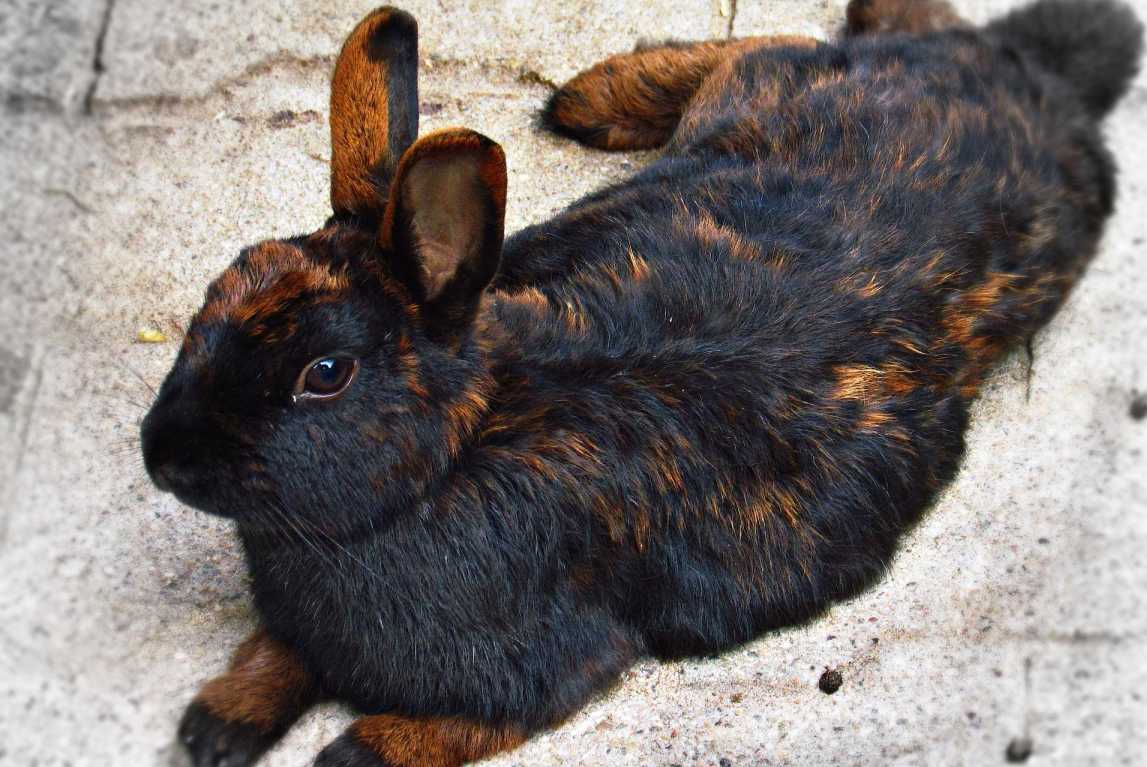 Like humans, rabbits could also get bacterial infections that affect the urinary tract (kidneys and bladders). When this happens, the rabbit will suffer an inconsistency when passing out urine.

It could also experience urine dribbling. This leads to urine being absorbed by its skin and fur. If the urine stays there for too long, the acidity will make the fur fall off, and the skin will become irritated.

This is called urine scalding, and if it isn’t treated, it can lead to a skin infection. Urine scalding also leads to loss of fur in the genital area and the hindquarters.

You can tell if your bunny has a urinary tract infection from its urine. Typically, a bunny’s urine color should be yellow or dark orange. It can be red or brown, which means dehydration, but it is still nothing to worry about.

If you begin to notice red spots in your rabbit’s urine, it is probably the blood, and you should take action, likewise, If the urine is cloudy. 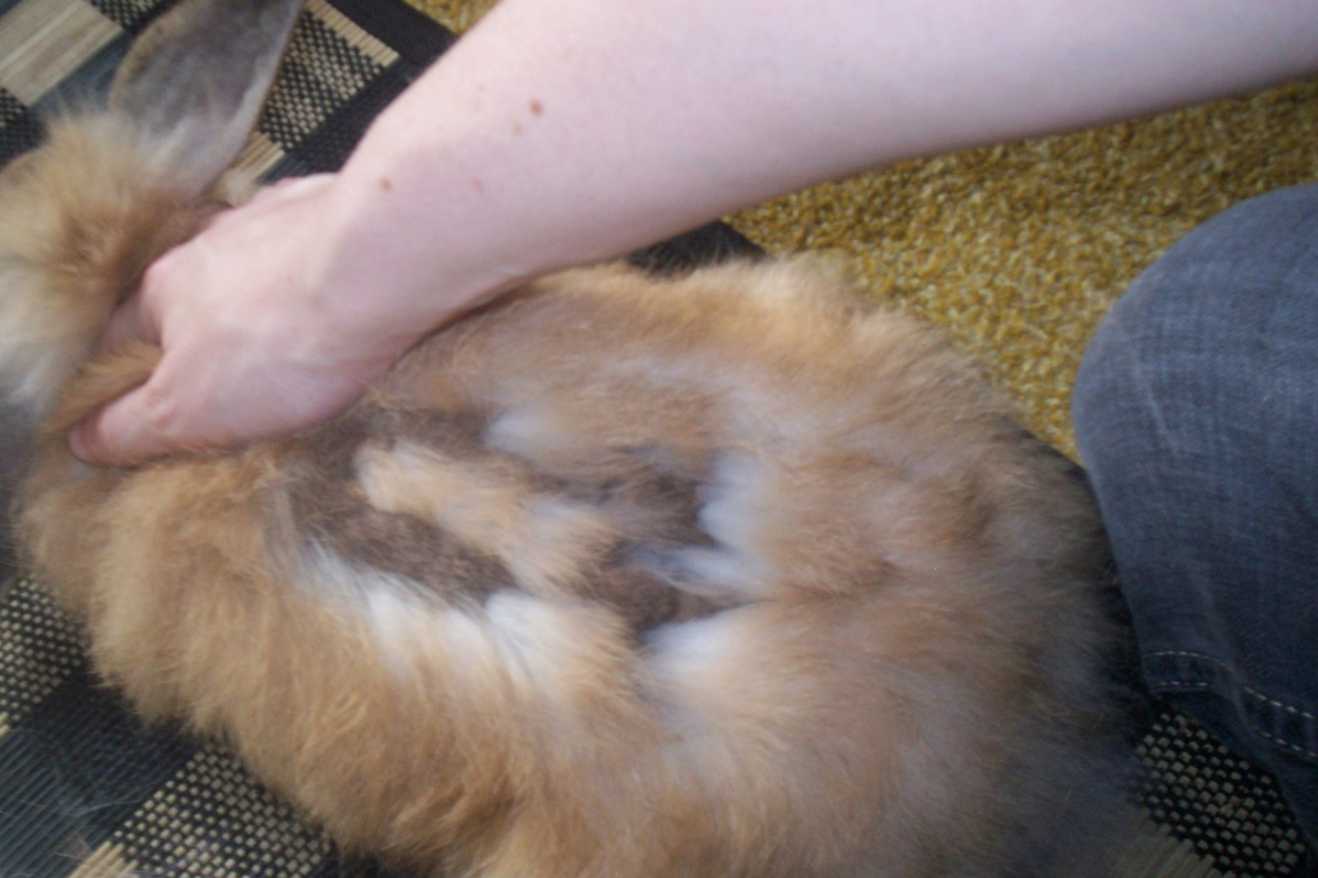 Different bacteria can cause snuffles, but the most common is Pasteurella multocida. It is often accompanied by dental problems and manifests how cold affects humans.

So it would seem like your rabbit is exhibiting cold symptoms if it has snuffles. Mucus would be coming out from its nose. Other signs include runny eyes, difficult breathing, coughing, sneezing, etc.

Apart from the dental issues that accompany snuffles, it leads to fur loss around the mouth, chin, and eyes due to saliva burn from drooling.

It also causes alopecia when runny eyes and nose leave wet patches on the fur for a long period. Other bacterial infections on the skin can lead to scratching and itching, leading to hair loss. 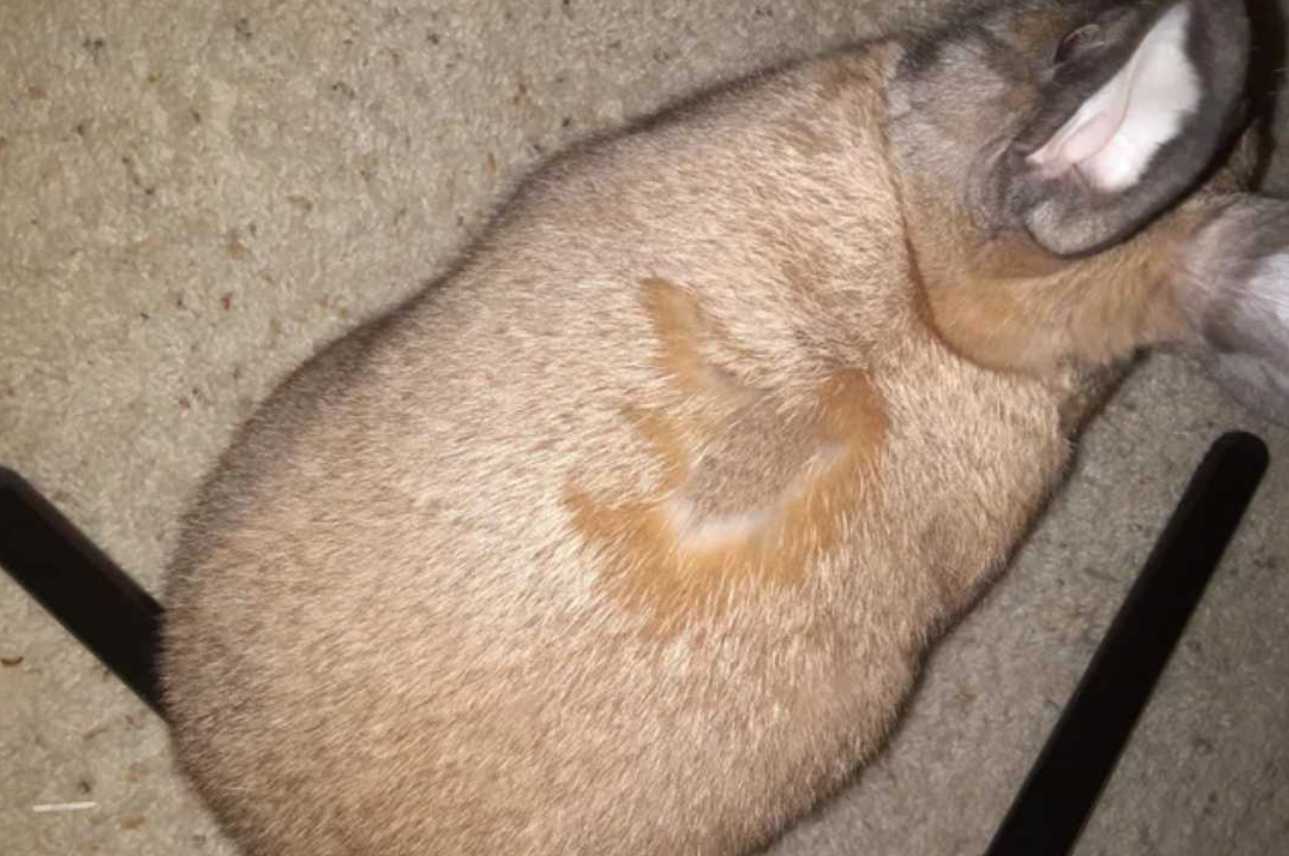 Usually, during pregnancy, does tend to pull out large amounts of fur from their skin. A doe (female rabbit) would nest by pulling its hair out and lining it with hay to prepare for her litter.

This technique has proven to be effective for the survival of babies, especially in the wild. A buck living with a doe would sometimes pluck out its fur for the cause.

But what if your doe isn’t pregnant yet it’s losing hair? Yes, it’s possible. Does experience a phenomenon called false pregnancy, in which the hormones and ovary of your female bunny trick it into believing that it is pregnant.

Does can also pull hormones from other pregnant female rabbits and have a false pregnancy, otherwise known as a phantom pregnancy.  This could be caused by stress or being mounted by another rabbit, even a doe. 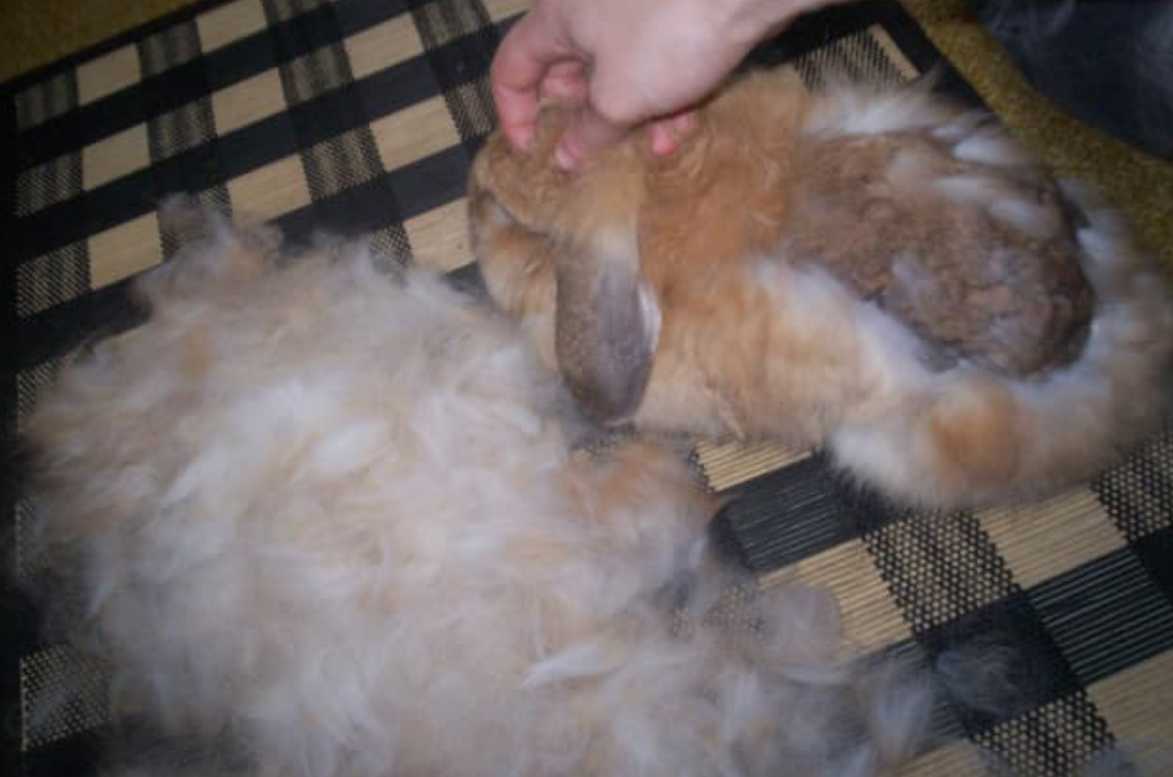 Your rabbit will groom itself to keep clean, but grooming could also cause alopecia. While it is normal to see your bunny grooming itself, you should also watch out if it becomes too much.

A rabbit can overgroom itself if it is anxious about something. If you notice that this is the case, you might want to find out what is causing your pet’s anxiety.

If you cannot find it,  take your rabbit away from the environment for a while. Bunnies also tend to over-groom when bored, so you  keep yours occupied and interested in something else.

If you have more than one bunny and you find one grooming the other, you have to be on alert because, unlike some animals, grooming isn’t an act of bonding for bunnies but rather a sign of dominance.

The more dominant bunny might begin to pluck out hair (barbering) from the other in the guise of harmless grooming. Once you establish it’s barbering, rescue the weak bunny from the dominant one.

If rabbits didn’t grow up together, it would take time to bond and get accustomed to each other. They might likely engage in a vicious fight, tearing off fur from their skin and leaving bald patches.

However, to establish this cause, you have to catch your rabbits in the act. The best way to know is to check for clues and evidence. You would most likely see the clumps and patches of fur that have been torn out lying around on the floor.

Rabbits fight each other for other reasons, for example, if another rabbit irritates or threatens. They also fight for dominance.

However, rabbits who grow up together can also be hostile towards each other because they had ‘hit a hard path.’ Once you establish that your bunnies fight rather than play together, keep them separated from each other for a while to see if the hair loss continues.

You can bring them together again, but under close supervision. If the situation doesn’t change, you might have to keep them separated.

It is normal for your bunny to shed old fur so taht they can grow new ones, but when it becomes excessive, it’s no longer normal. You need to become more attentive to its behaviors to decipher what the cause could be.

If, after discovering the cause, there’s only little you can do on your own to stop the hair loss, take your bunny to see the vet for immediate and proper treatment.