9 Biggest Rabbit Breeds in the World (with Pictures)

If searching for the biggest rabbit breeds is what you are looking for, you came to the right place. This article will tell you more about the nine most giant rabbit breeds. Their size, origin, lifespan, general use, and temperament will all be listed in the guide. 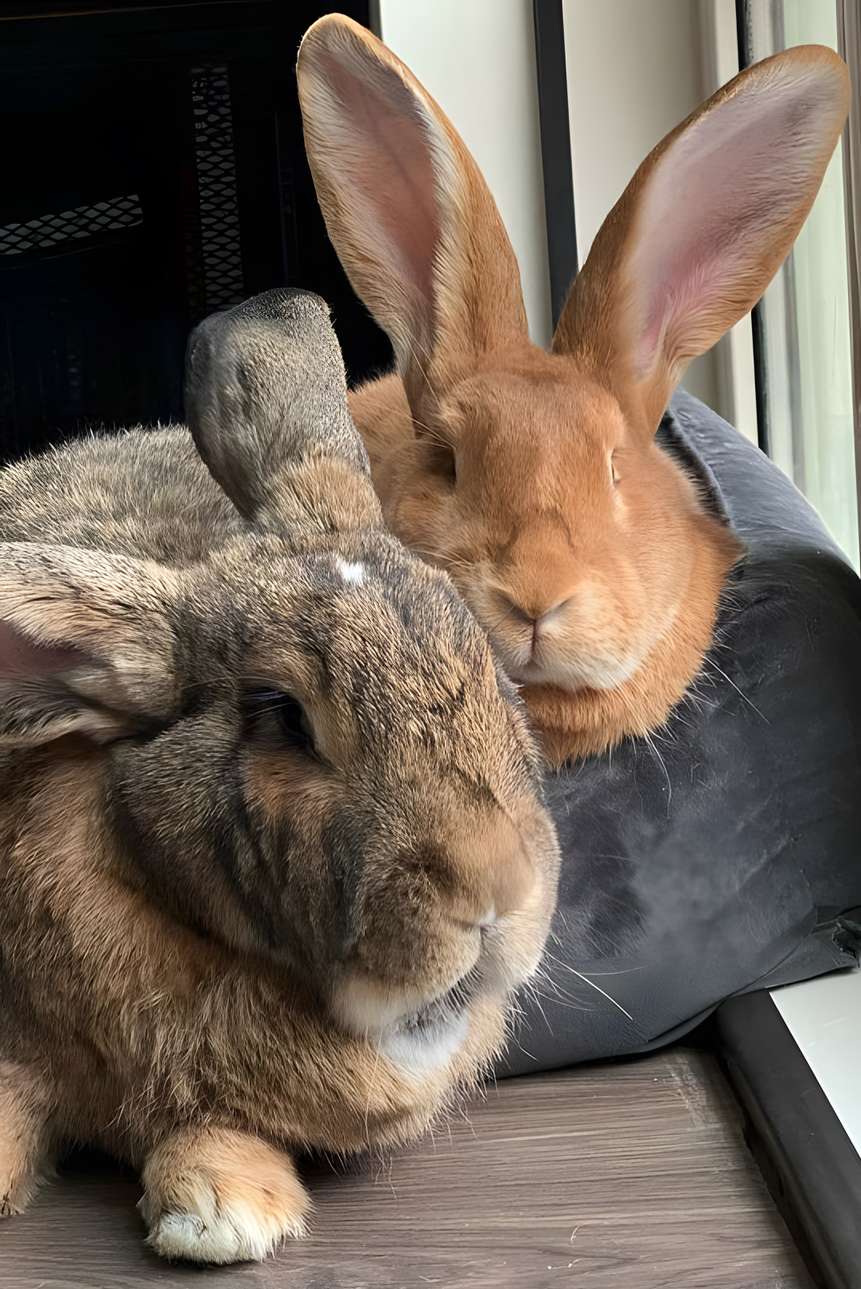 The Flemish Giant is the largest and heaviest rabbit breed in the world. Starting from being a utility animal, Flemish Giants are also considered a great breed as pets.

Their origin is unclear as they are considered one of the oldest rabbit breeds. Most researchers believe them to be descendants of either Patagonian or Argentina Patagonian Rabbits.

By the 1890s, the breed had come to the United States of America. The American Rabbit Breeders Association (ARBA) recognized the Flemish Giant in 1929.

The Flemish Giant can range from 13-25 lbs. in weight and 76-91 cm in length. They get their most enormous size as they mature around one to one and a half years old.

In 2010, The Guinness World of Records awarded the longest rabbit to a Flemish Giant named Darius. Darius has a length of 129cm (4ft 3in) and is considered the longest ever documented rabbit.

The rabbit is known for its glossy and fluffy fur. The color can range from light tones such as white and gray to darker tones like black and blue.

Despite their large size, most rabbits belonging to the breed are considered gentle giants. They are mostly calm and docile in temperament, so they are great as pets. Even with the rise of their popularity, the Flemish Giant is still costly and harder to obtain due to its large size. 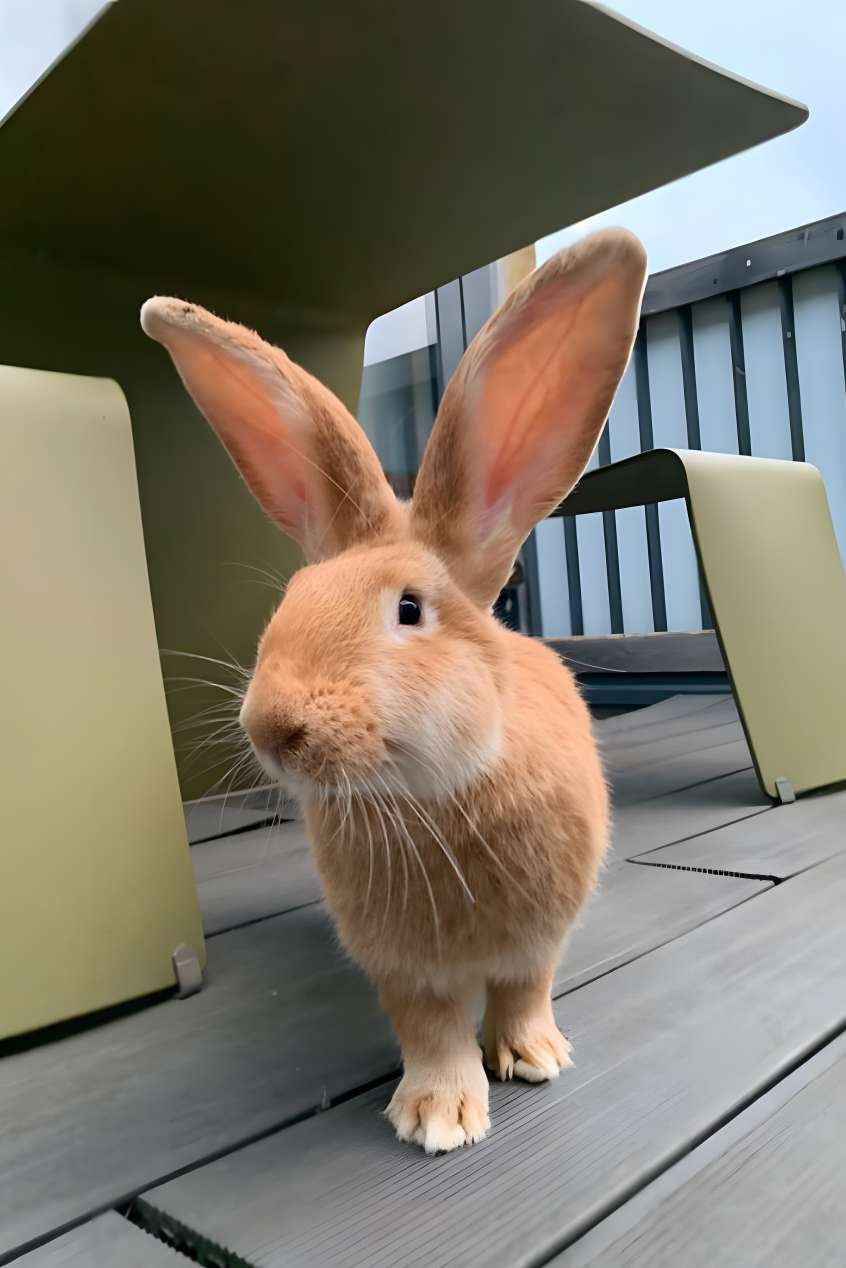 The Continental Giant rabbit (also known as German Rabbit) is the second heaviest breed. They are imported from Europe to the US for meat breeding.

Despite their larger size, Continental Giant can be petted on tiny, enclosed houses as long as you provide them with the proper space to jump around and be active. They are also easy to potty train, especially if they start to train when they are kits.

The Continental Giant is very gentle and calm, so they are good pets for children. If you have a medium to a large house with an outdoor space, then this rabbit might be the one for you.

With that said, there are cons when it comes to making the Continental Rabbit your pet. They have a relatively short 5-8 years lifespan compared to other smaller rabbit breeds that can live up to 10-12 years.

They also need a lot of playtime in wide spaces and a good diet of rabbit pellets, hay, and vegetables. If your lifestyle doesn’t align with their needs, acquiring one is probably not the best decision. 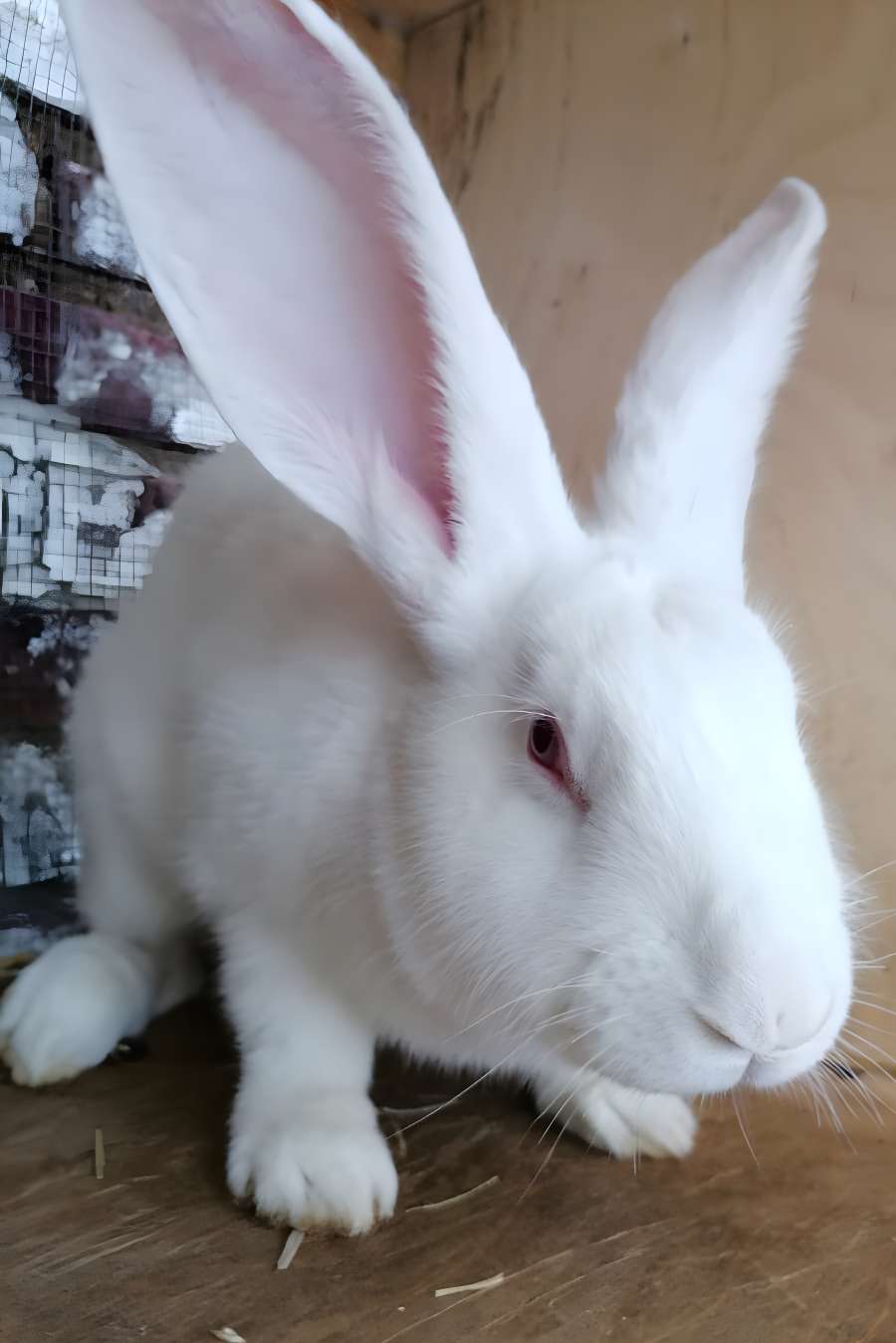 Blanc de Bouscat came from France in around 1906. Mr. and Mrs. Dulon of Gironde breeds the rabbit by combining the Angora, argente Champagne, and albino Flemish Giant. The rabbit is recognized by the British Rabbit Council and not by ARBA.

The rabbit is characterized by its spotless white fur and red eyes, which is the reason and goal of the breeding. They are also great as a pet and for meat production.

Since the Blanc de Bouscat is made by breeding the Angora rabbits, they are also characterized by their dense fur. Fortunately, their coat is much shorter than the normal Angora. With that said, they need extensive brushing and grooming sessions, especially after molting season.

This type of rabbit needs a vast space to stretch out its hind legs and jump around. Their cage also needs to be larger by 3 feet in length and width. If you have the space for them, they are indeed suitable as pets.

They have a very friendly and docile temperament. Like the other domestic rabbits, they can be easily trained and petted. Blanc de Bouscat is also great for new owners and kids as they are not aggressive and love socializing. 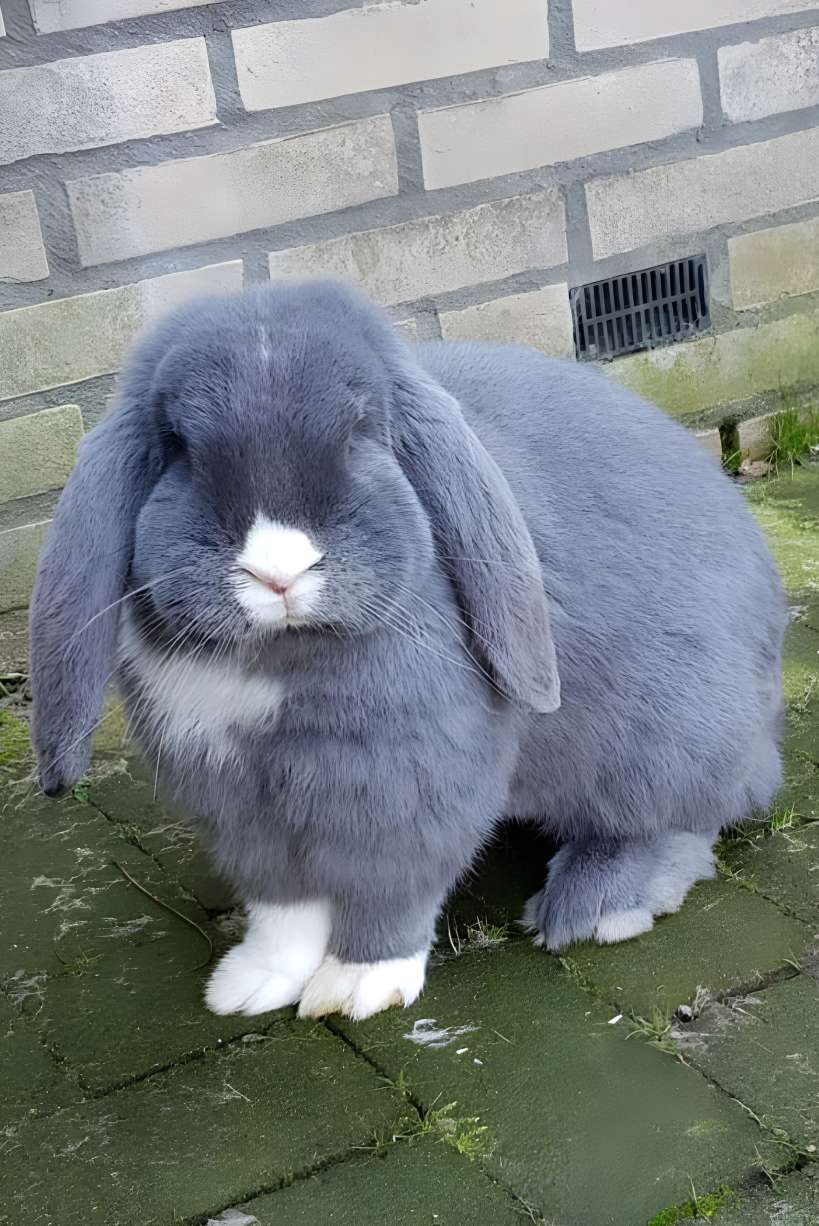 The French Lop is the only lop-eared rabbit in a giant and bigger size. The rabbit is characterized by its huge ear ranging from 5 to 8 inches. Their ears dangle around the rabbit’s chubby and large head.

The Giant French Lop is a crossbreed between French Butterfly Rabbit and Angora. The ARBA and British Rabbit Council recognize the breed.

Their coat is short and dense with a wide range of colors. Other than the ears of the Giant French Lop, their head is also a prominent feature. They have a large head, broad forehead, and chubby cheeks.

Even with their large stature, the Giant French Lop is an excellent company to many people. They love to bond and socialize with their owners. They also love to play around and hop across the area like cats and dogs.

They can also be exposed to kids as long as they know how to handle large animals. The rabbit’s gentle, calm, and not aggressive nature makes it perfect as a family pet.

Be sure to provide these large breeds with ample space and the food source as they need more than usual and standard-sized rabbits. A house with a vast room and enclosed outdoor grass patches are perfect for these rabbits. 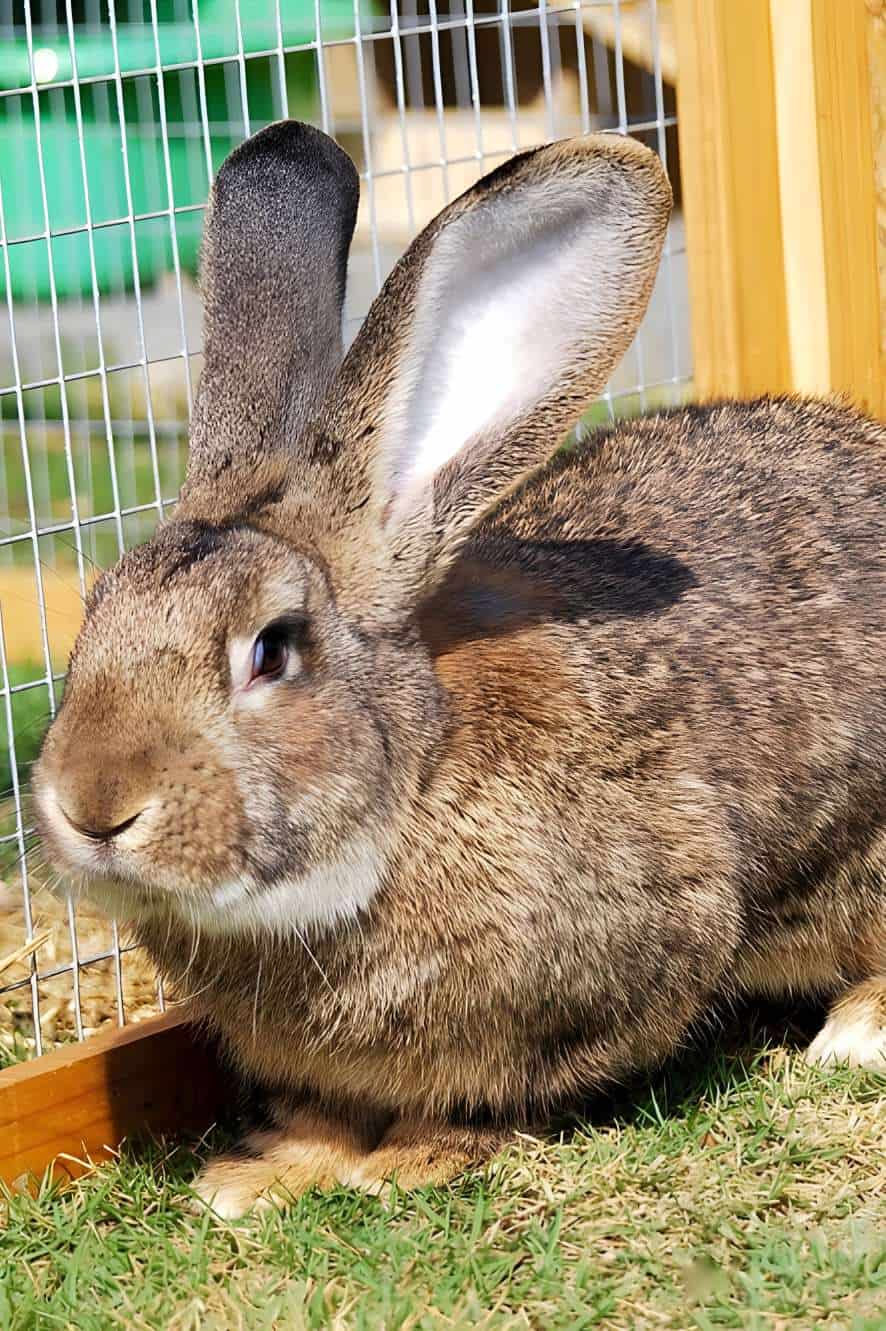 The Spanish Giant is a crossbreed between the Lebrel Espaniol, Bellier, and the Flemish Giant. As it’s an old breed, the origins of these types of rabbits are unclear.

They mainly resemble the Continental Giants with their upright long, and broad ears. They have a soft, thick, and short fur that can range with many color varieties such as ash, brown, and gray.

The rabbit is primarily bred for meat production, especially in Spain, produced the most. Farmers can take around 13 to 15 lbs. of meat in a single rabbit. They also have a very low bone density,  making them optimal for the distribution of rabbit meat.

If you are looking forward to having the Spanish Giant as a pet, well, you are in luck. They are very calm and docile, perfect for families with or without kids and elderlies. They are bred for meat production, so they have a relatively short lifespan of 4-6 years, even with the utmost care.

Like the other giant rabbits on the list, they will need the right amount of space to walk around and explore. Providing them with food and clean water is also a must.

When it comes to grooming, they don’t have a specific standard, routine grooming and cleaning will suffice most of the time. 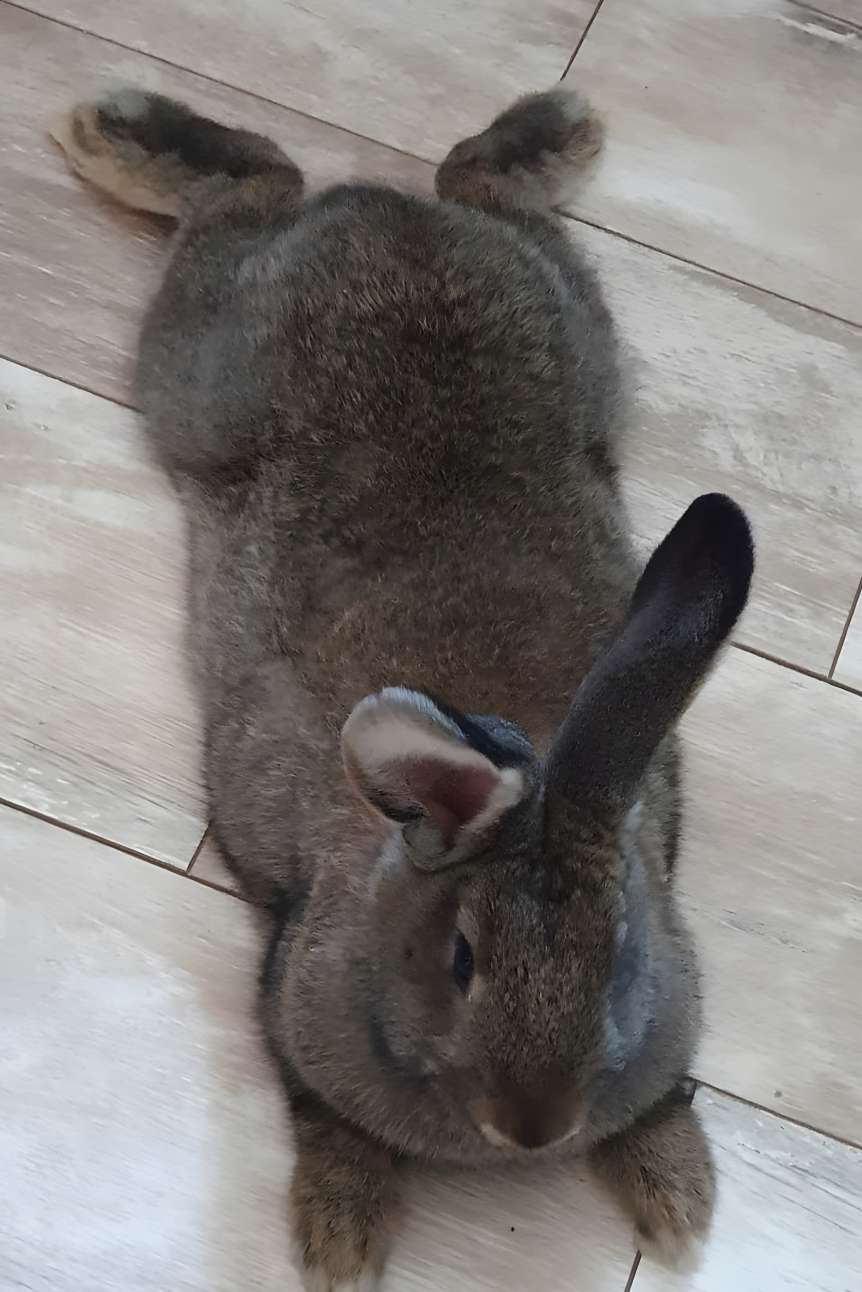 The origins of the Hungarian Giant are also muddy as they first appeared around 200 years ago. The rabbit is a cross between Continental Rabbit and various wild breeds. The ARBA does not recognize them.

Their long and upright ears characterize them. The fur of the Hungarian Giant has a darker tone on the outside and a lighter tone inside the undercoat. The length of their coat is short, but it’s dense.

They have a broad and wide body. Their ears also stand upright, similar to those of the Continental Rabbits.

Initially, they are called Hungarian Agouti due to their color pattern. The breed has been crossed so many times that they dropped the agouti in the name altogether.

Hungarian Giants are primarily used for meat production due to their high meat content. Although, lots of pet owners also started to use the breed as a show animal and pet.

Even though they are used for meat, the Hungarian Giant can form bonds with their owners. They are also extremely calm and docile, so they can be pets even with people new to caring for pets. Children and the elderly can also take care of the Hungarian Giants. 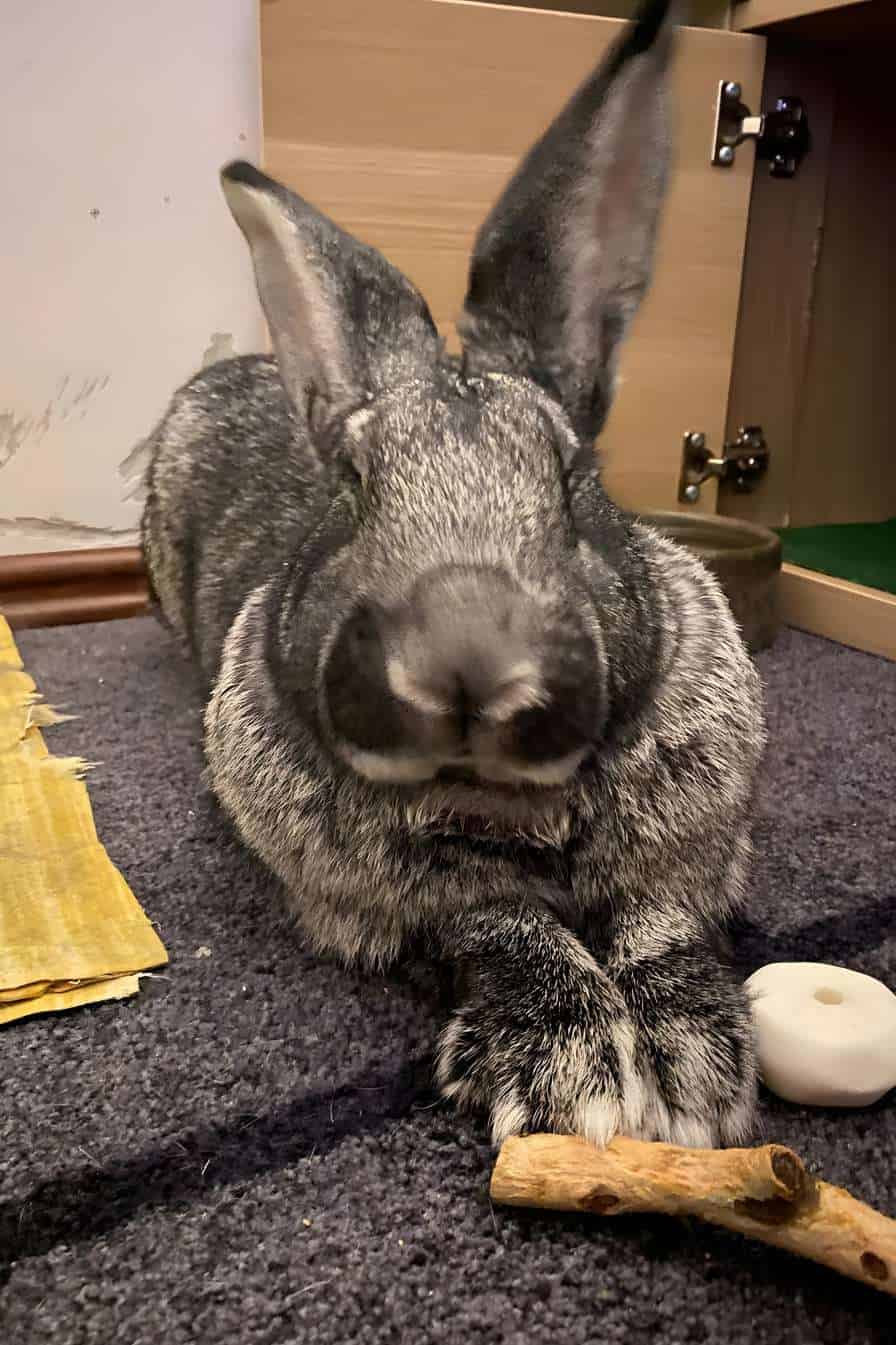 The Giant Chinchilla results from the Flemish Giants and Standard Chinchilla Rabbits. They are developed and bred in the United States of America.

Its medium length and silky coat characterize the breed. Most Chinchilla fur has four colors that may vary in their coat: blue, white, gray, and black.

You can easily see the grays as it was the most prominent color of the breed. The color of their coat is often described as salt and pepper as it has light and dark tones peppered across their body.

The rabbit has a medium-sized head and chubby cheeks, along with a sturdy body and average-sized legs. Their ears stand upright while their eyes are darker in tone.

Compared to other giant breeds of rabbits, the Giant Chinchilla has relatively low maintenance. They don’t have any grooming or cleaning specialized to their species as the standard is enough for their fur.

Giant Chinchillas also make an excellent pet for the elderly and families with or without children.

Although it’s recommended to introduce large breeds of rabbits to families with older and more grown-up kids, families with younger children can still own them as long as they know how to handle an animal. 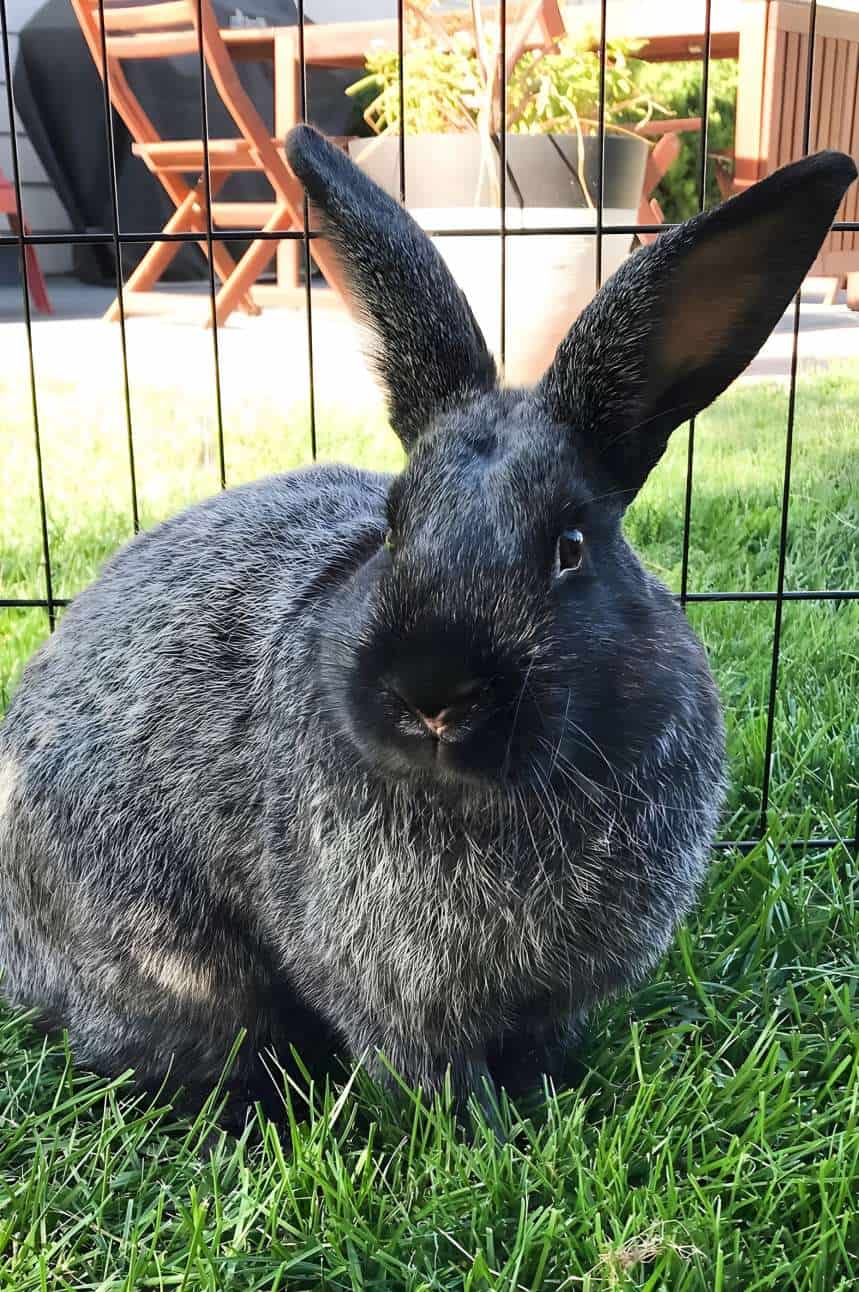 The Silver Fox (also known as American Silver Fox or American Heavy Silver) is known for its dense, black-colored fur.

The name is derived from their fur’s ability to stand when combed and stay that way until it’s combed in the opposite direction. The feature is similar to those of the arctic fox hence their name.

Walter B. Garland makes the breed of Ohio in the 1900s. The origin of the Silver Fox is still unknown, but it’s believed that rabbits such as Checkered Giants and Champagnes are present in its ancestry.

ARBA recognized the breed in 1925, where it’s still named American Heavy Weight Silver. The Silver Fox initially had two varieties, black and blue. Unfortunately, by the late 1970s, the original blue variety had declined and died out.

Although the Silver Fox has many color varieties such as lilac, chocolate, and white, ARBA only recognizes the black ones. Their body is long while their faces are medium-sized. They have upright ears and small dark eyes.

The Silver Fox has a very calm and docile demeanor. They are a great mother to kits and are known to adopt litter. They are also safe for children and elderlies to pet. 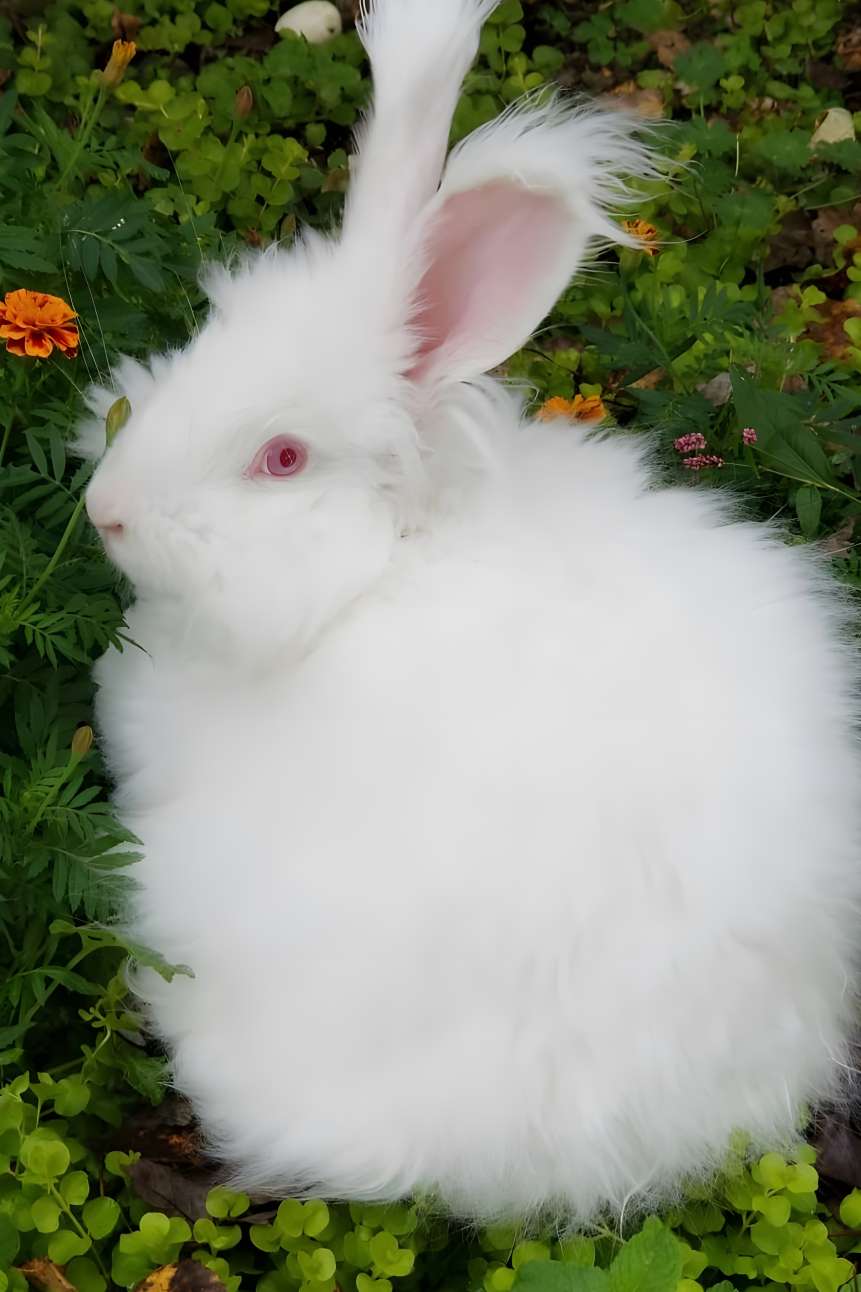 The Giant Angora is the largest type of Angora rabbit that ARBA recognizes. Although there are other color variants, such as white and black, the ruby-eyed white is recognized.

Angora breed is the oldest domesticated breed in the entire world. Although they originally came from Ankara, Turkey, the Giant Angora is bred and produced in the USA.

Louis Watts from Massachusetts created the breed by crossing the Flemish Giants and French Lop to the standard Angora. The breed is designed to generate thick and long fur on a bigger scale.

Giant Angoras are recognized widely due to their thick and long fur needed to make rabbit wool. Rabbit wools are sought after as they don’t have allergens, unlike wool from goats and sheep.

Besides their long wool, the rabbit has a big head and upright ears. The albino variant has red eyes, while those with darker tones have black or brown eyes.

Although the breed is primarily made for fur production, they rose in popularity as show pets due to their ling and gorgeous hair.

With that said, the Giant Angora is not recommended for first-time owners. They need extensive grooming as the surplus of fur can lead to wool blocks. At the least, grooming experience is necessary.

Giant rabbits tend to have more extensive needs. We hope this list of the biggest rabbit breeds helps you learn more about these gentle giants.