The rarity of the Silver Fox rabbit is genuinely exceptional. The breed was intentionally but beautifully developed, and regardless of their size and their stunning fur, they stay as one of the most modest and amazing furry animals. 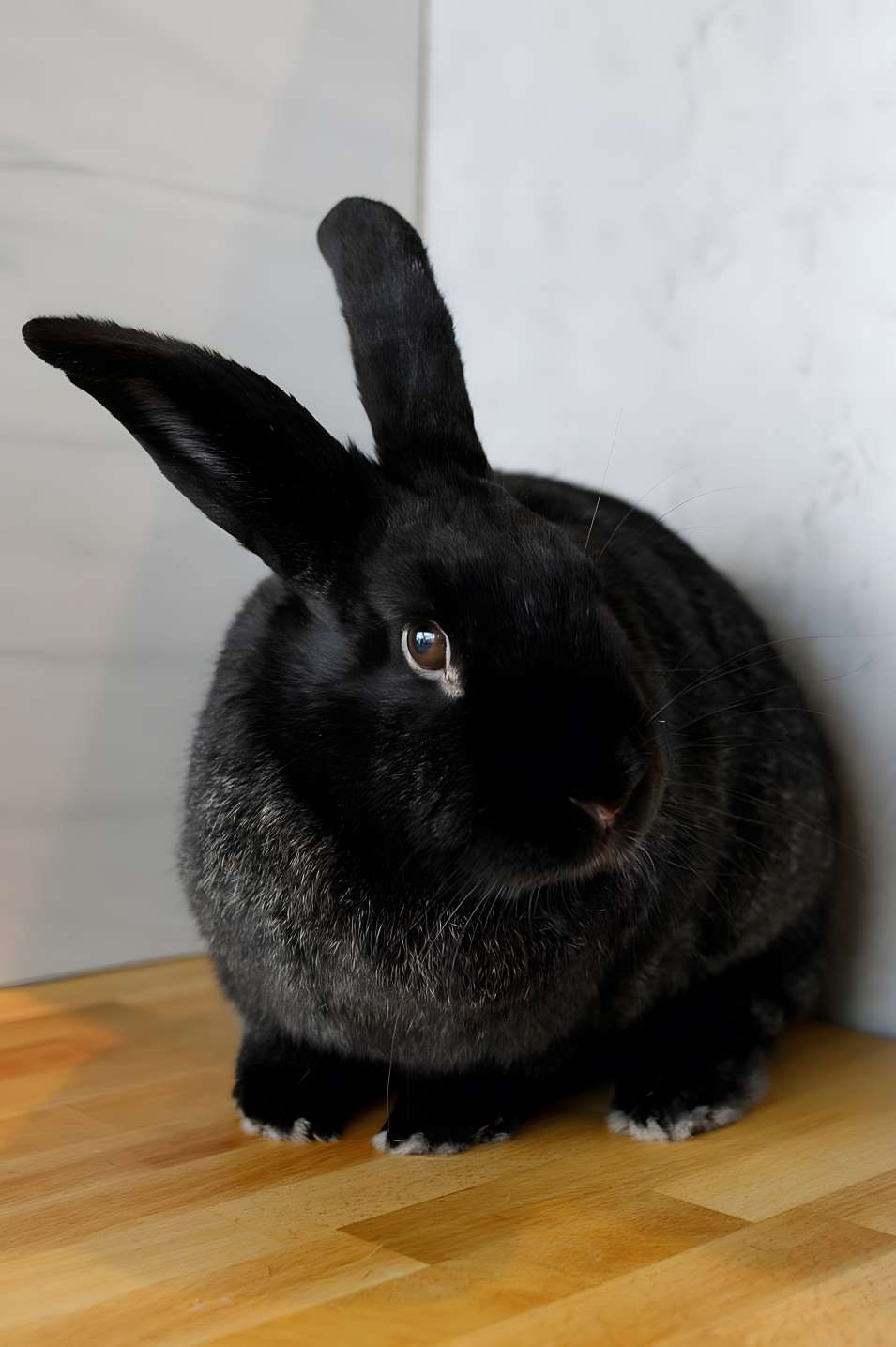 Mixed breeds are common to dogs but not to rabbits. But do you know that Walter B. Garland, a rabbit breeder from North Canton, Ohio, and owner of Vema Rose Rabbit Farm, has managed to create a new breed of rabbit in the 1900s?

Though the breed he used for cross-breeding is debatable, most rabbit breed experts believed that Garland used his Black Checkered Giant doe and the English Silver buck to create the Silver Fox rabbit.

However, since Garland was a known rabbit breeder during his time, some believed that this third breed ever developed in the U.S consists of breeds other than the Checkered Giants and English Silver. They thought that Garland used a Champagne d’ Argent rabbit to develop the Silver Fox rabbit.

Unfortunately, no one can attest which rabbits were cross-bred since Garland did not publish or put his work into writing.

But what most people are sure about is the breed was developed sometime from 1911 to the 1920s. Since then, the Silver Fox Rabbit breed was recognized as part of the American Breeder’s Association.

Though they have successfully created the breed, the Silver Fox rabbit’s existence is limited to America and Canada. After several years, the Silver Fox Rabbit, or what is previously known as American Heavyweight Silver or American Silver, faces the probability of becoming an extinct rabbit breed in the United States.

How Was Silver Fox Rabbit Developed? 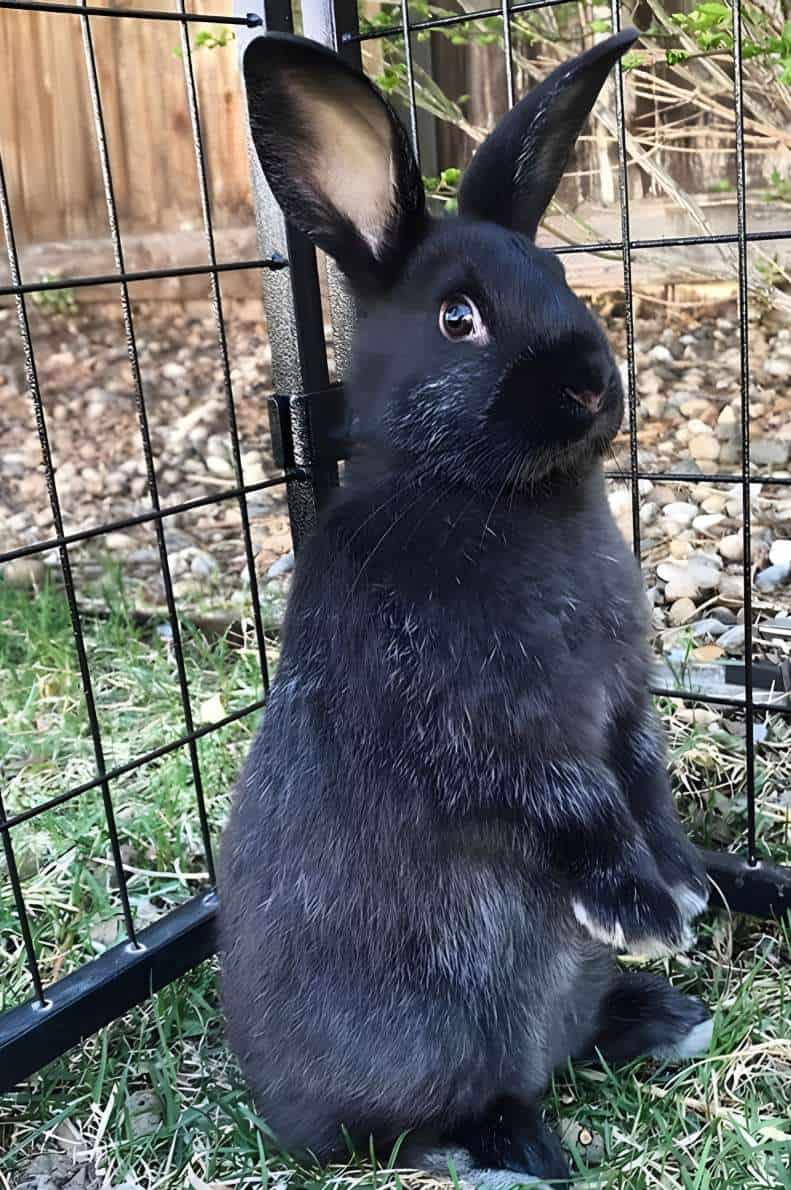 There were many speculations about how Garland developed the Silver Fox Rabbit. People had said that for Garland to achieve the height, weight, shape, and fur of the Silver Fox rabbit, he needed to do the following:

The to-do task seemed easy, but it took years and hundreds of attempts before Garland successfully developed the Silver Fox rabbit. In which theories of how it was created developed, and the most famous one is this:

From the same litter, Garland took the most oversized female rabbits (does) and bred them with its father, the English Silver.

The process continued, and the multiple attempts to cross-breed and inter-breed rabbits produced one of the world’s rarest Silver Fox rabbits.

How Many Rabbit Varieties Does Silver Fox have?

Silver Fox has the Black Silver Fox and the Blue Silver Fox varieties. However, ARBA dropped the Blue variety as the National Silver Fox Rabbit Club failed to reach the number of rabbits shown within a 5-year probation period.

Silver Fox Rabbit Breed Standard Appearance: What They Look Like? 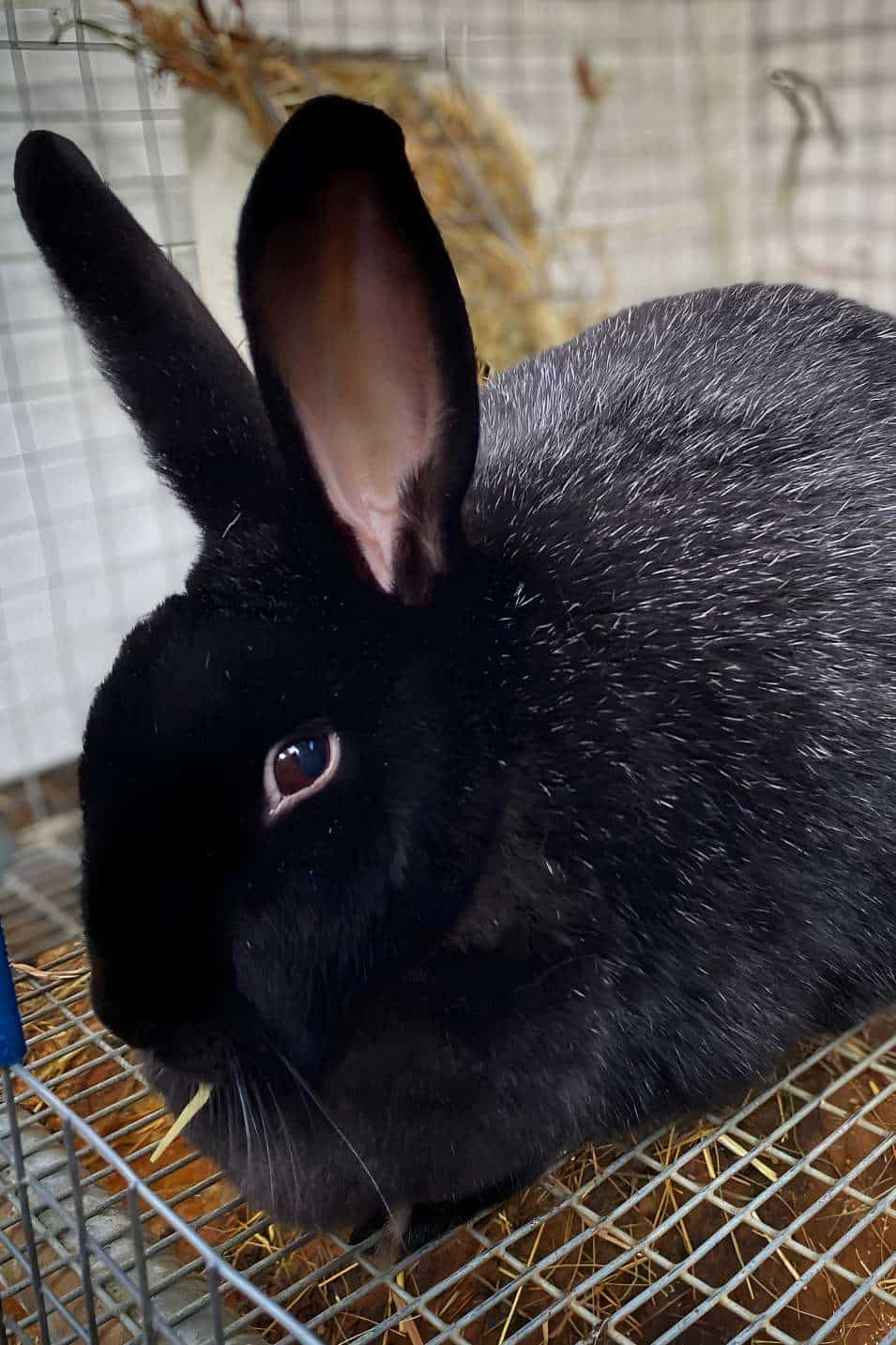 Silver Foxes rabbits are giant breed rabbits. They are heavy and oversized, and the adult Silver Fox Rabbit’s standard height is around 20 inches (when they stand up), with weight ranging from 9 pounds to 12 pounds.

The Silver Fox rabbit has a smaller head and face. But the breed has an excellent bone-to-muscle ratio that makes their shoulder and hind legs meat-filled. Their ears are medium-sized but are shorter and more upright than the regular rabbit ears.

Their furs are unusually long and thick compared to other rabbits, and their white markings show up as early as a month and a half until they are around four months old.

The Silver Fox rabbit’s fur, at least 1 ½, is distinct from other rabbits. Stroke their fur from their tail to their head, and it will stay standing up like it sees a ghost. It will stay that way until you stroke them smoothly from their head to their tail – the opposite direction.

Though the ARBA only accepted the Black Silver Fox, the breed still comes with rare colors like Blue, Lilac, and Chocolate Brown.

Silver Fox Rabbit Personality and Temperament: Are They a Good House Pet? 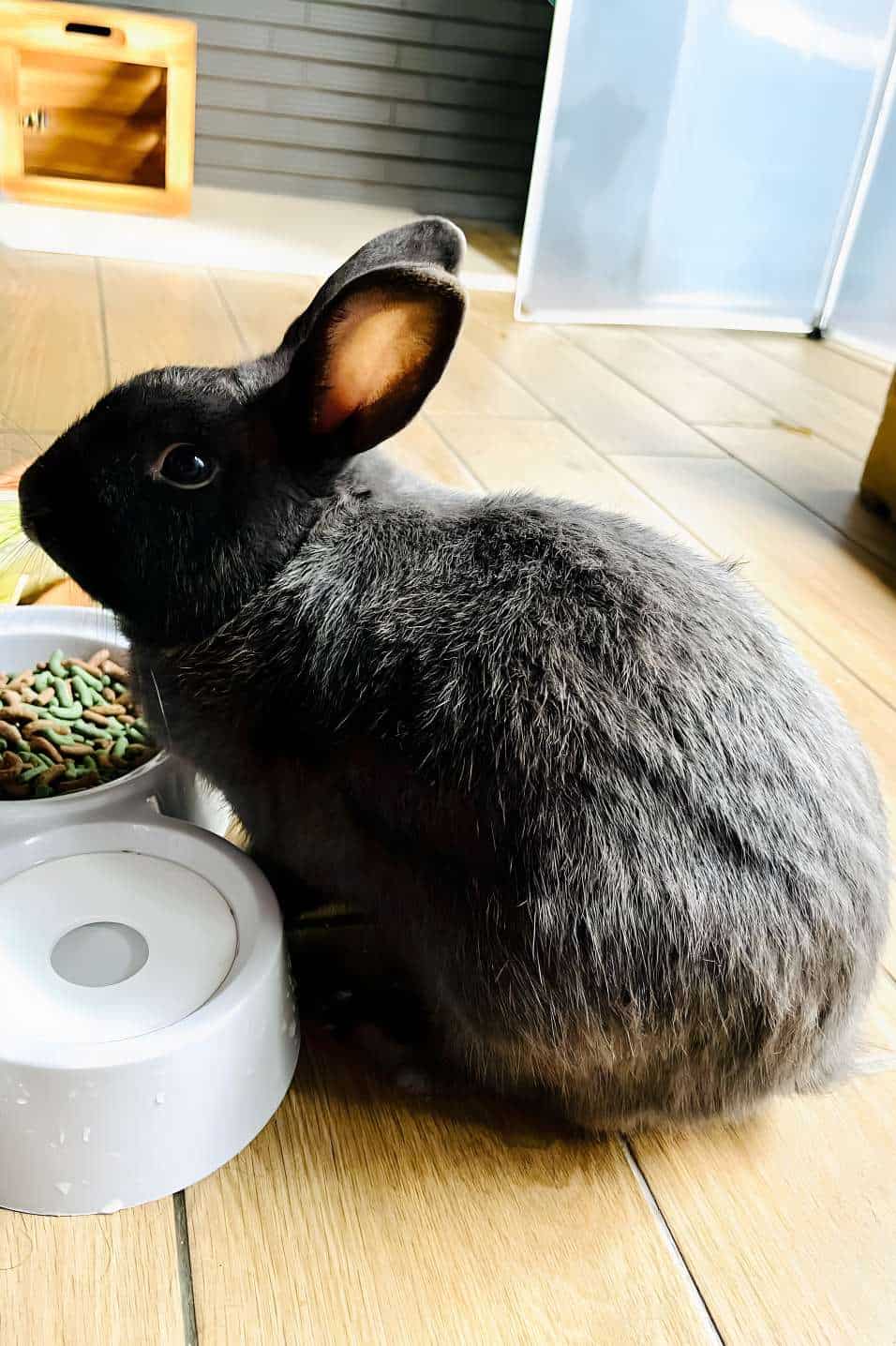 The Silver Fox rabbits are active rabbits that love to play with toys, even the simplest ones. These rabbits’ minds work like cats and love to play with toys that require a little bit of physical and mental strength. They are pretty trainable, too! This means that you can easily litter-train them.

These little ‘teddy bears’ are also known to produce liters of milk and several litters in one pregnancy. They have a calm temperament, and exceptional parenting skills make them good mothers to their litters.

They feed, nurture, care, and raise their kittens well compared to other rabbit breeds. Their personality and temperament make them the best pet for people of different ages, including those beautiful little children who do not have any pet-handling experience.

Silver Fox Rabbit Health Issues and Temperament: Common Problems and How to Treat Them 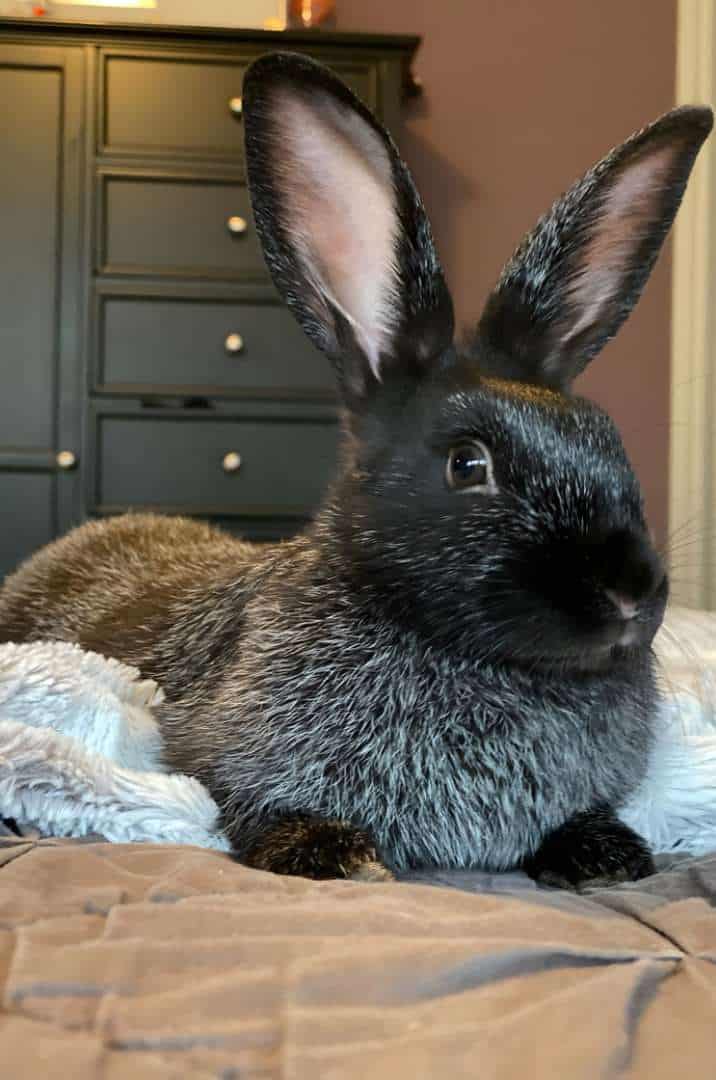 Though the Silver Fox rabbits’ genetics are cross-bred rabbits with a possibility of inter-breeding a father-daughter or mother-son rabbits, they do not show any health issues, illnesses, or abnormalities that you will be concerned about.

However, they can get infections and diseases as common rabbits do.

Several types of mites may infect the Silver Fox rabbit. These include the ear mites and the fur mites in rabbits. Preventing mite infection is easy. Just clean the rabbit’s hutch, cage, or pen regularly. Also, give them and your other pets proper grooming to prevent mite eggs from hatching.

You must feed the Silver Fox rabbits with something to chew to avoid this. Most breeders and pet owners give them a large amount of hay which constitutes around 70% of their diet, and chewing the hays will control their teeth’s growth.

Flystrike is another reason for you to maintain the Silver Fox rabbit well-groomed and its area clean. This parasitic infestation occurs when a fly lays eggs into your ungroomed dirty rabbit’s fur. Once the egg is hatched, the maggots get inside the rabbit’s skin and infect it. The flystrike’s deadly infestation can kill your rabbit within hours if left untreated. 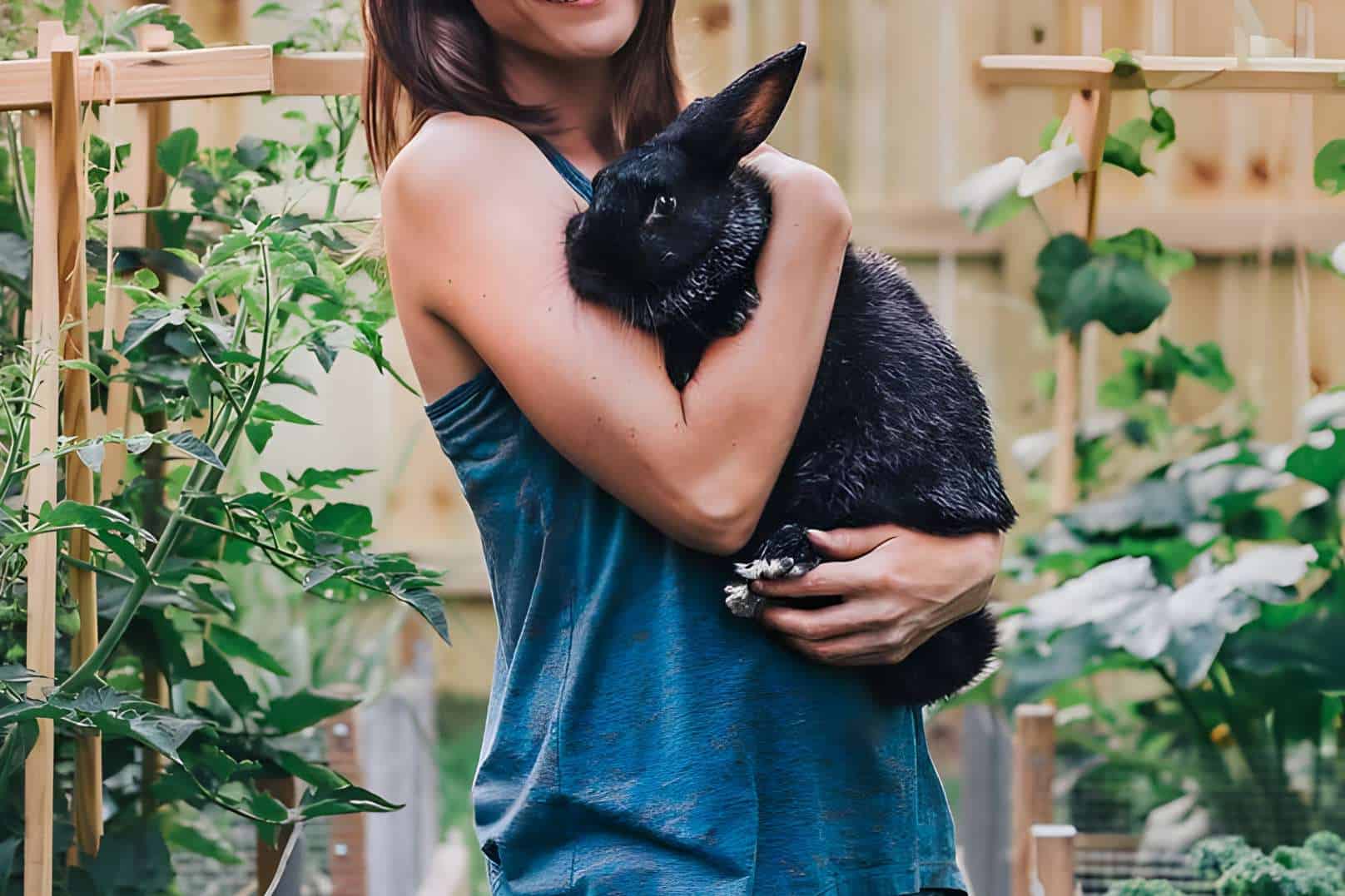 The previous sections have taught the background and history, how Silver Fox rabbits are bred, varieties,standard breed appearance, personality and temperament, health issues, and character.

And now, here are what you must note when taking care of one.

Silver Fox rabbits are large breeds, which means a bigger enclosure is needed to live a comfortable life. There are two places you can keep your rabbits. You can place them outdoors or indoors. But before you set up a place for them, make sure that the area is suitable for the Silver Fox rabbits.

Be reminded the Silver Fox rabbits can swiftly adapt to new weather, but they cannot tolerate too much heat. Thus, you must put them in a shade that protects them from direct sunlight and burning temperature.

On the other hand, keeping your rabbits indoor may be a perfect idea. They will be protected from any bad weather conditions, and most importantly, they can socialize with their pet owners. However, do not forget that their place needs to be regularly cleaned to stay healthy. If you want an idea for a great and fun wooden rabbit housing, here is a rabbit house tour.

The Silver Fox rabbits’ diets depend on their nutritional needs. Most of their diet comes from rabbit-friendly vegetables and fruits for wild rabbits. They even eat wood sometimes.

The house Silver Fox rabbits, on the other hand, is mainly fed with hay and rabbit pellets. These rabbits get fruits and vegetables not as part of their meals but as a treat, depending on their owners.

Be cautious, though, when you give them fruits and vegetables. Although they are herbivores, not all green leafy vegetables are for them. Before you feed the Silver Fox rabbit, double-check the content of the food that you will be giving them. Do not feed them with any vegetables or fruits that contain Launadum and high sugar.

Launadum is an alcohol tincture that can kill your rabbit instantly. While sugar may cause or damage the Silver Fox rabbits’ organs.

It is important to note that a rabbit’s teeth grow over time. This is the primary reason why you need to give them something to chew. It could be food or toys. Either which one you give, the chewing exercises allow them to trim or file their teeth naturally.

Although the rabbits’ notable characteristic is their two front teeth, growing them is not advisable as it can pierce their jaws, mouth, and face.

Silver Fox rabbits require lots of exercises. This is why a recommended house for this large-sized rabbit is big enough for them to roam around, stretch, and play. If they cannot burn the excess energy, the rabbits will become frustrated.

Another form of exercise rabbit exercise is walking. It may be unnatural, but there are some rabbit owners who walk their pets with them, like how they walk their dogs.

You can buy leashes meant for these pets and teach them to go for a walk with you. But, be mindful of the temperature. Rabbits are very delicate creatures, and walking them under the sun’s heat may burn their feet.

Walking your Silver Fox rabbits and letting them play around the ground, jump, dig and run help them trim their nails slightly to prevent nail overgrowth and sharp edges that might harm them or the children who want to pet them.

If you are a rabbit enthusiast, a breeder, or a newbie who wants to own a pet, the Silver Fox rabbit is your best choice. Their temperament makes them good pets and mothers, while their build and fur are perfect for animal shows.