Why Do Rabbit Have Tails?

If you run into a rabbit, you can’t help but gush over it. But who can blame you? You would probably wonder why they look the way they do. Have you ever asked why rabbits have tails? It is, perhaps, one of those questions that might linger on your mind!

Tale Of The Rabbit’s Tail 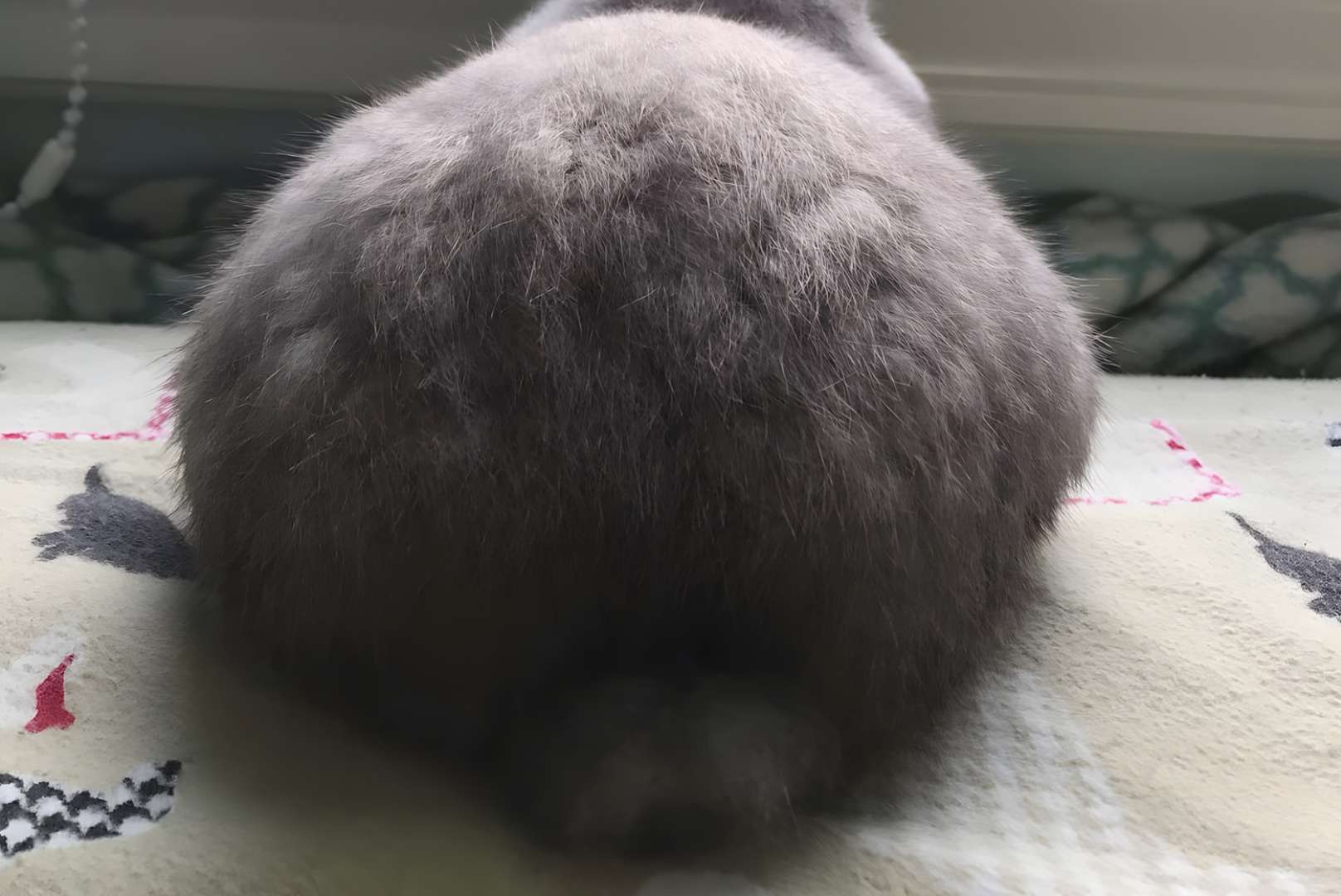 If you take a closer look, it seems every part of a rabbit looks adorable. However, there is more than meets the eye. As much as they look charming, there is a purpose to everything. Take the tail as an example. It’s cute and fluffy, but it serves a purpose.

The tail is not just there for decoration. Before figuring out what the rabbit tail is for, perhaps you should find out why it looks the way it does.

If you compare the rabbit’s ta with other animals, you would notice how short it is. The average length of a rabbit’s tail is about five (5) centimeters. If the rabbit is larger, it would also have a longer tail compared to the smaller ones.

Looking at the rabbit’s neuroanatomy, they have about 16 tailbones. That is low if you put it side by side with other animal species. Due to their length, the tail, also known as scuts, appear puffy and stubby. However, don’t let this deceive you. There are reasons why the rabbit’s tail looks the way it does now.

Tails For A Reason 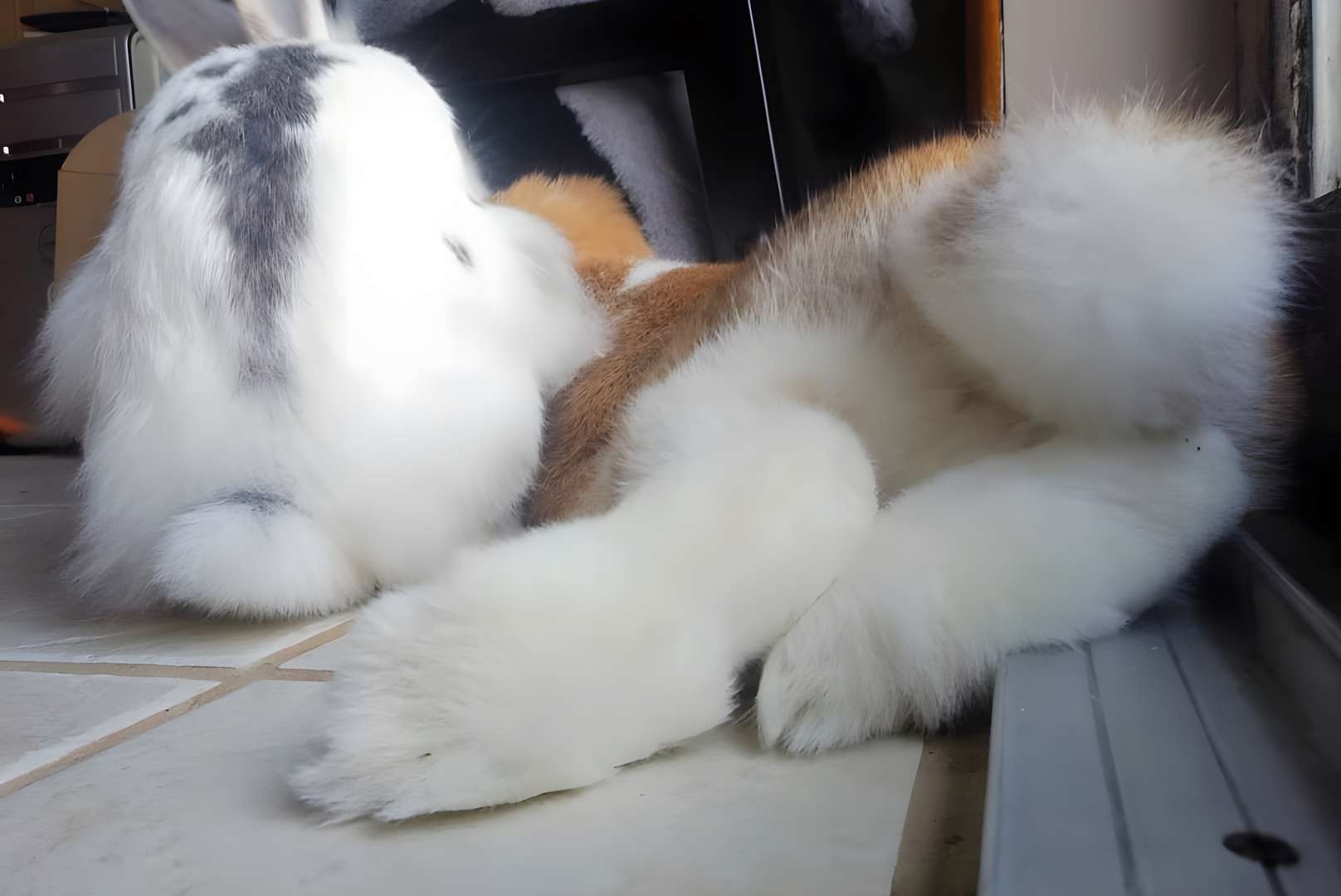 The rabbits we now know are a product of evolution. And as part of their progression, their tails have developed as well. The tails are there for several reasons including the following:

One of the main purposes of the tail looks like it does is to protect them from predators. Every time rabbits are out in the wild, they have to watch out for various threats. If they don’t want to be preyed upon easily, their tails can help them escape.

When they run away, their tales can confuse and puzzle the predators. Whenever rabbits make a quick or sharp turn, the brightness from their white tail will disorient the predator.

The shortness of the rabbit’s tail also has another advantage. Since rabbits live in burrows or warrens, it would be hard to keep themselves hidden well if they have long tails. If their tails were longer, it would be easier for predators to reach into these underground burrows and snatch them.

Rabbits use their tails to send signals to their kind whenever there’s a predator around. They would move their tails in various directions and serve as a warning. When rabbits from their group see these soundless signs, they know there’s something dangerous in their midst.

The other rabbits have the chance to run away from the aggressors or hide inside their burrows once they see the signals.

A rabbit’s tail plays a role when they make quick turns. Whenever they turn, the tails help with their balance. When they turn in one direction, the tail goes the opposite way. This mechanism allows them to move much faster without losing their sense of balance.

If someone is chasing them or running after them, they won’t have such a hard time stabilizing themselves. The rabbits have their tails to help them out.

Just like other mammals, rabbits exhibit different body language and behavior. Their tails can also tell you something about their actions or mannerisms. Knowing what these mean will help you understand rabbits more. 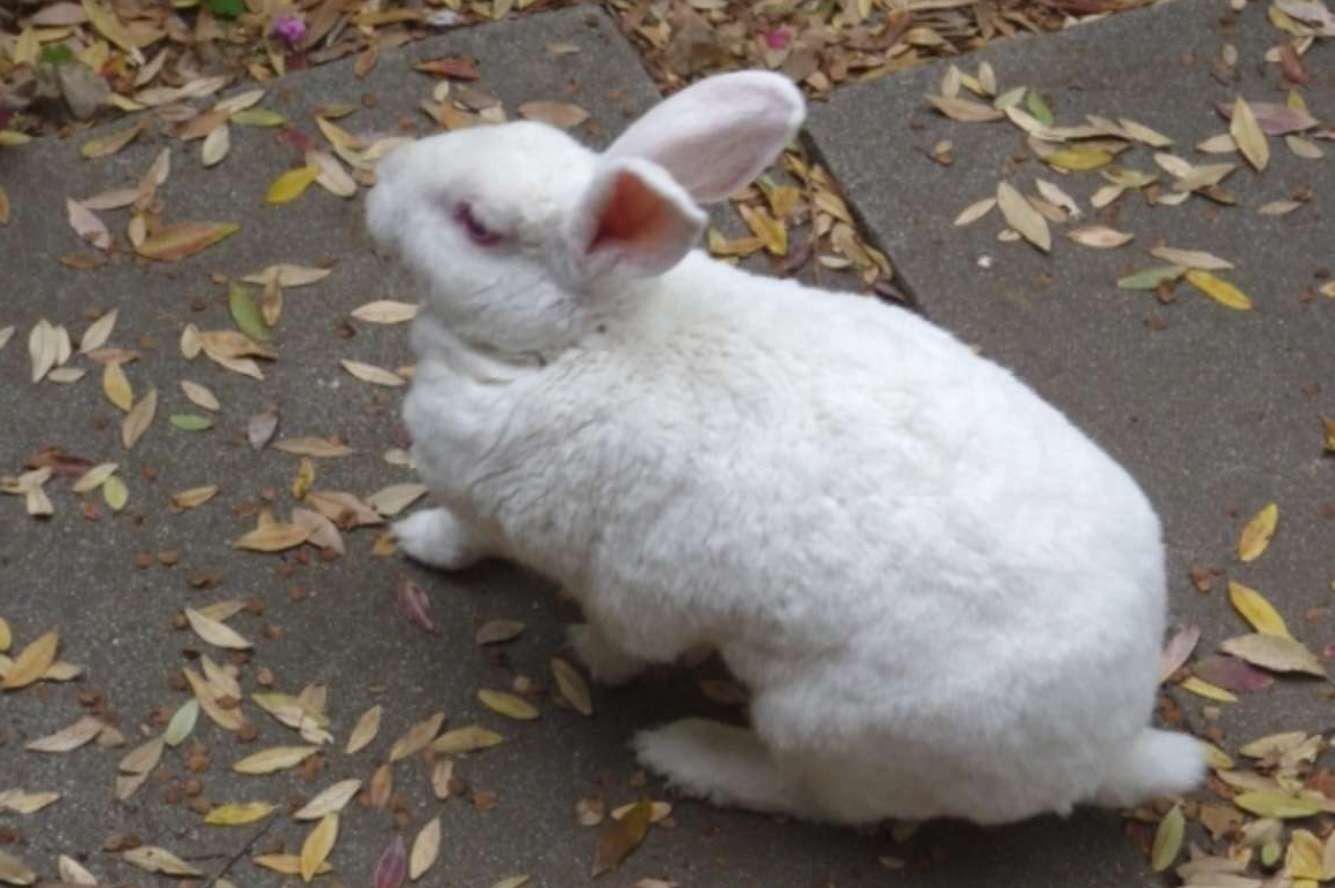 If a wild rabbit raises its tail, it means that it’s trying to communicate with the rest of its colony. It usually does this when there is an incoming danger. It happens when there are predators around.

It also happens in domestic rabbit breeds. They raise their tails to warn others of danger. However, it can also be a sign of aggression. Their sense of awareness and alertness are on when their tails are up. And it could be a sign that they want to get away or strike back.

If you have a pet rabbit and exhibit this kind of behavior, you should just let them be. They might also be angry, anxious, or scared. Whatever the cause is, it’s best to give the rabbit time to process what’s going on. Once their feelings have subsided, they would come around.

You just need to be patient and understanding. That is the least you could do. If they are still behaving the same way for an extended period, perhaps other underlying causes need to be looked into.

If you see your rabbit raise its tail, it doesn’t always mean that they feel they are in danger. It could also be due to nature’s call. Rabbits also lift their tails whenever they need to pee. It’s their way of making sure the pee does not get all over their tails. 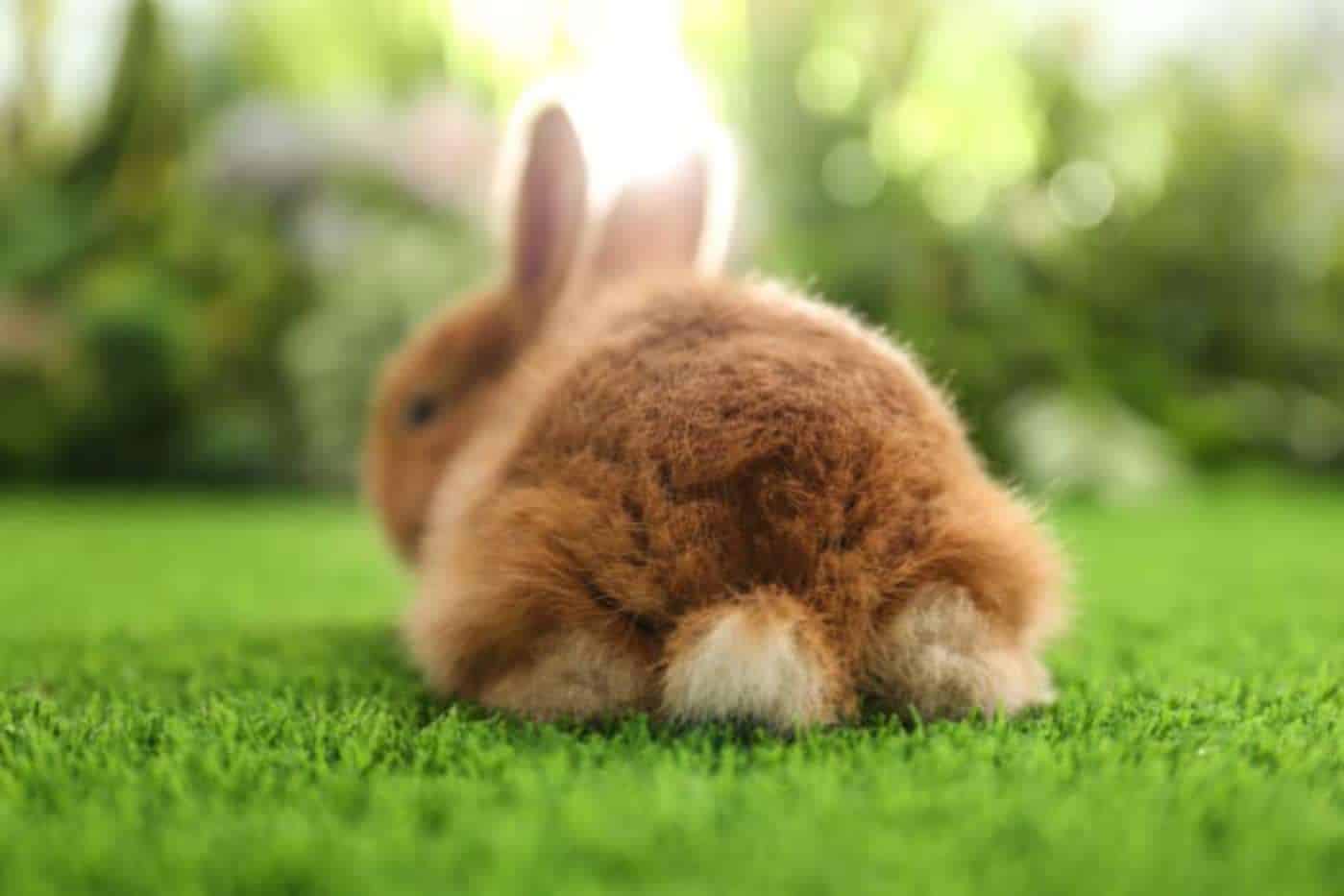 If you see a rabbit with its tail lowered, it’s an indication that they are wary and careful. The rabbit is alert due to the changes in its other body language. They would stretch their bodies out and tuck their tails in.

They would also use their hind feet firmly on the surface while trying to crawl forward. It would seem like they are getting ready to take the necessary action if and when danger comes.

No Touching Of The Tail 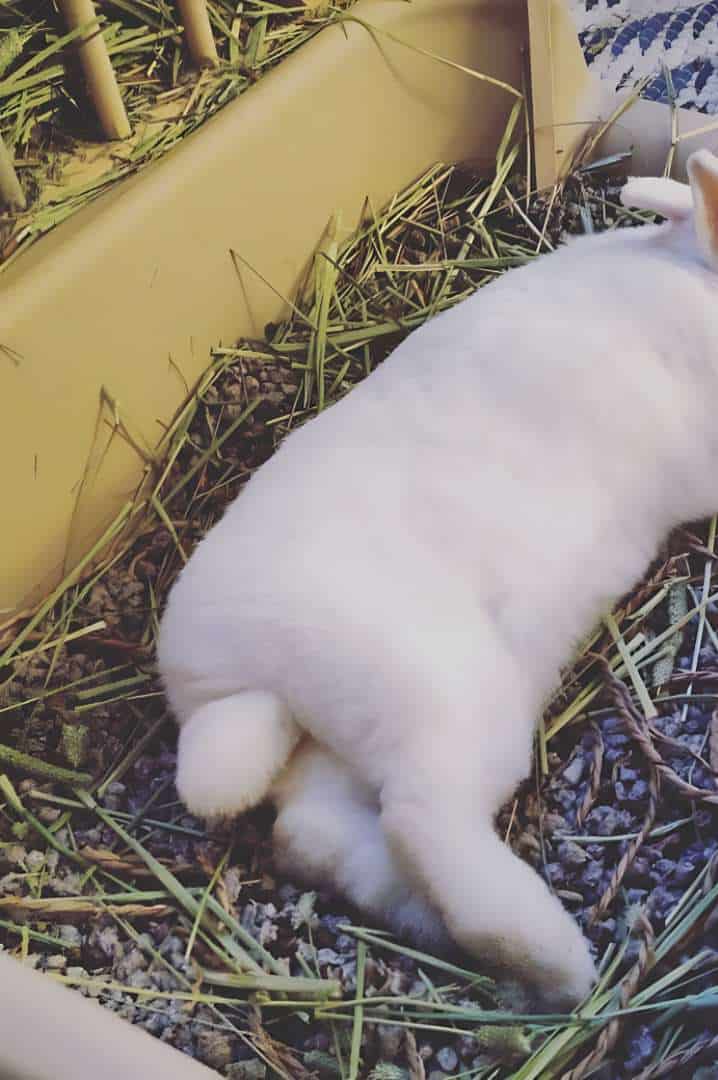 Yes, a rabbit’s tail is as cute as the rest of its body. However, as much as possible, try to avoid touching it. While it doesn’t hurt them or anything like that, it’s best to leave the tail alone.  It’s not a plaything that you can touch for fun.

If you touch, pull, or tug the tail, the rabbit would usually turn around and stare at you. They would not be happy with you and what you have done. Some rabbits might think you are trying to hurt them or something. Once they have turned around, expect to hear a hiss or a growl from the rabbits.

There could be numerous reasons why your rabbit is chasing its tail. If fleas or mites have infested the rabbit, their bodies can get itchy from all the bites. Once the parasites have reached the tail, the rabbit will keep touching it. If this happens, the rabbits can injure or hurt themselves.

Rabbits who gain a lot of weight might find it difficult to move around. It’s why you should let your rabbit exercise or do something that would invigorate them. If they aren’t doing anything, they might start thinking of their tails as toys and play with it. If they do this once or twice, it would be fine. However, if they keep doing this, it might harm them and lead to a serious injury. 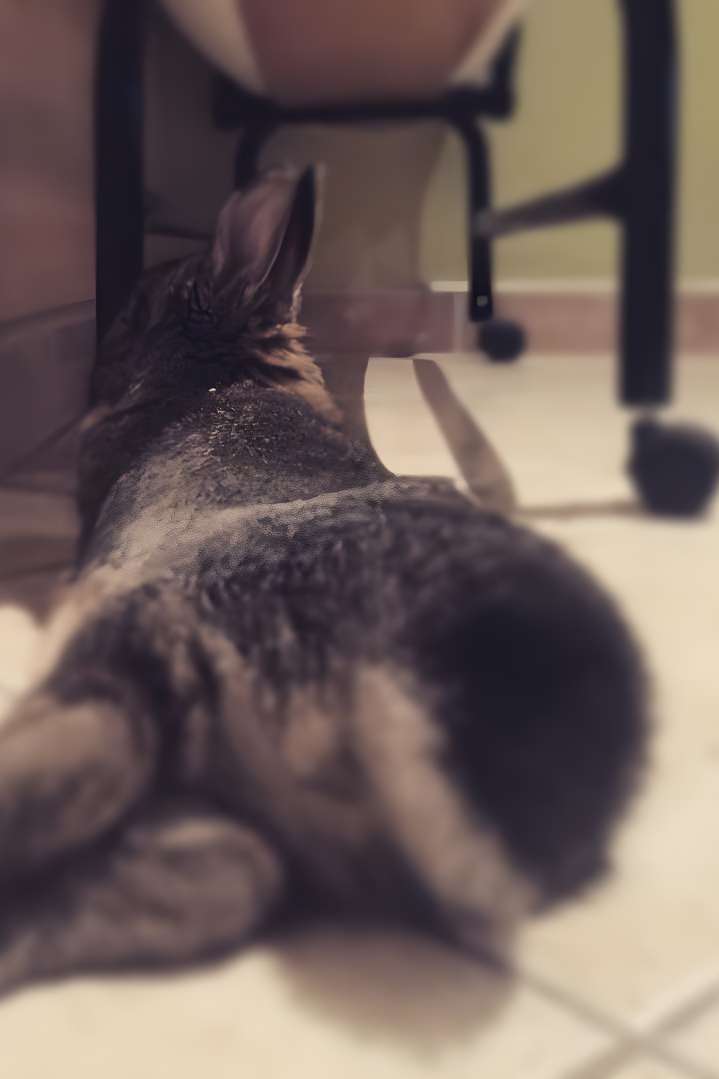 If a rabbit injures its tail, they can be in a lot of pain. This part of their body is sensitive, so any pain would bring discomfort to the rabbit. If something happens to your pet rabbit’s tail, you should take them to a veterinarian as soon as possible.

The vet would be able to take a look at the tail and assess the situation. If the pain is too much for the rabbit,  the vet can provide medication that would help ease the pang and throb. As mentioned before, it’s not advisable to touch a rabbit’s tail. If their tails are touched or pulled aggressively, it can seriously injure them. When handling rabbits, be cautious at all times.

If a rabbit loses its tail, they can never get it back. Unlike other animals, their tails won’t grow back. It’s just something they have to live with. While it might not be a big deal for domestic breeds, it can be troublesome and worrisome for wild rabbits. Afterall their tails can help them survive in the wild.

While rabbits can clean themselves, there might be areas, their tails included, that they can’t reach. If they are a little overweight, it might be harder for them to do this. This is where you come in!

If there is urine or poop residue on their furs, it’s an open invitation for them to get Flystrike. Parasitic flies would invade the rabbit’s body and lay their eggs. These eggs would then turn into maggots that would live off the rabbit’s flesh.

The condition can cause pain, shock, and many other symptoms. This includes weakness and lethargy. The rabbits would also lose their appetites. If you see any maggots on your rabbit, take them to a vet ASAP.

Every single part of a rabbit is important, including their fluffy tails. While their tails might not be as big as other parts of their bodies, they serve several purposes and are vital for rabbit’s survival in the wild.