Why Do White Rabbits Have Red Eyes?

Are you thinking of taking a rabbit home? You might already know that our furry friends come in a wide array of colors then! To add, you might have noted that those with white coats almost always have striking red eyes.

Now, are you wondering why do white rabbits have red eyes? We could let you in on that and so much more today!

If you are ready to delve into this rabbit hole, let’s go! 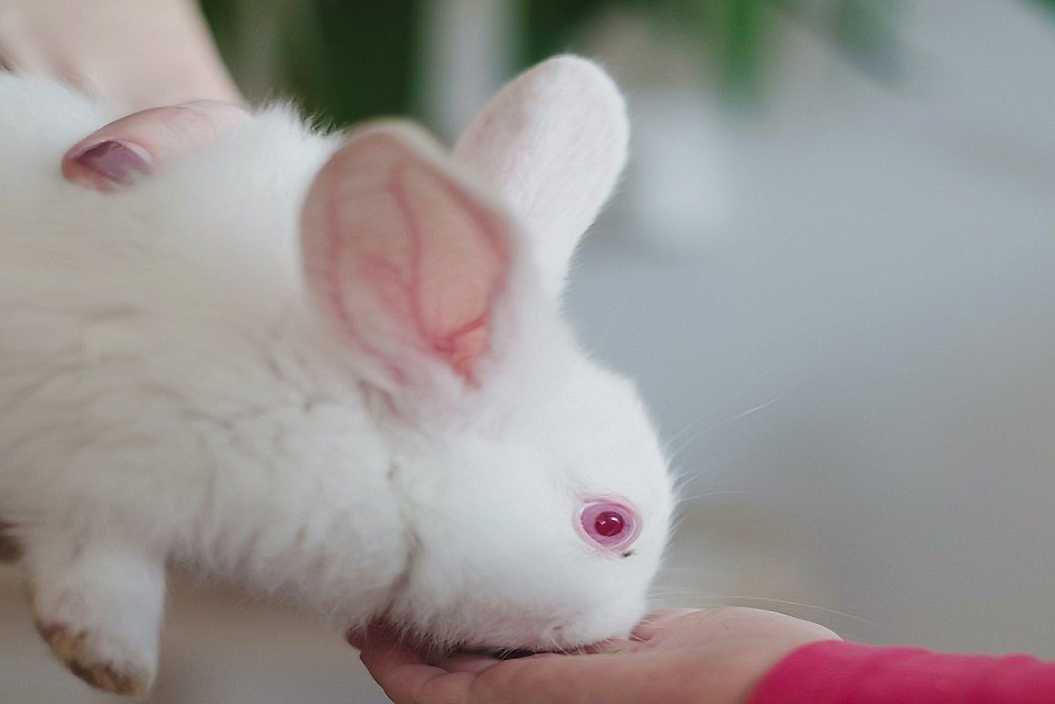 First, let’s start this off by saying that ruby-eyed white (REW) rabbits may have eyes that look red, but usually, their eyes are not red. In the few instances that they are, consider it a red sign for trouble. Confusing? Don’t worry. We will explain how all this could be in the following portions.

There are two main reasons why a rabbit with white fur could have eyes that look red. We will be talking about both, but first, let’s look at the most common explanation.

Rabbits With White Fur Have Red Eyes Because of Albinism 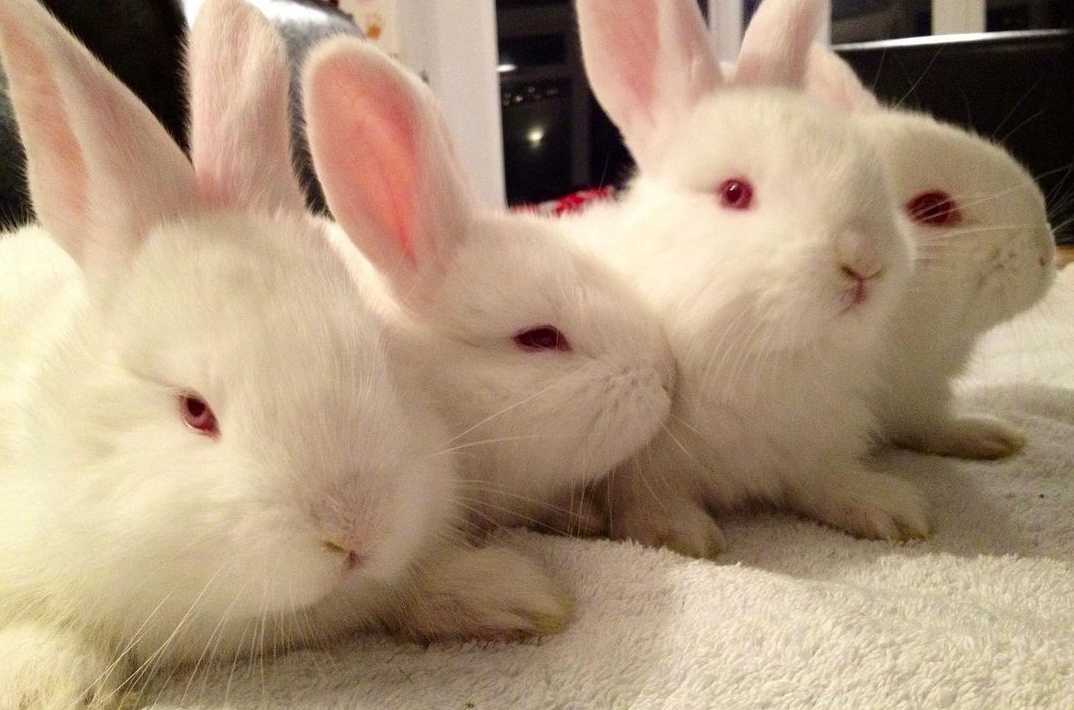 If you are looking for a short answer, the first reason would be albinism. White rabbits have red eyes because of albinism. In other words, these furry friends are albino rabbits. Let’s dig in deeper.

Albinism is a genetic condition that affects melanin production in the body. It could be there is limited or no melanin production at all. Now, melanin is a natural pigment that gives the hair, skin, and other parts of the body color. As you can guess, it is also what gives color to the eyes.

Most white rabbits you will see with red eyes are affected by this condition.

That brings us back to their eyes. If albinism limits melanin production, they would lack natural pigments. If they lack these natural coloring matters, it can’t be that the red we see are pigments.

What do we see then? The color of blood vessels. That is why white rabbits often look like they have red eyes.

It might be the best time to note that this is why healthy rabbits with red eyes usually sport white coats. As you would expect, since they have no pigment in the eyes, these furry friends won’t have color anywhere else.

There are instances that you would meet healthy ruby-eyed furry friends that sport some pigment in some parts of their bodies. In this case, you are most probably looking at a rabbit with leucism, a condition similar to albinism.

Sometimes, these rabbits’ eyes could appear pink. However, if the light hits their eyes at the right angle, you would likely see that beautiful red glow. That might not be a good idea, though.

What to Know About Sunlight and Ruby-Eyed White Rabbits 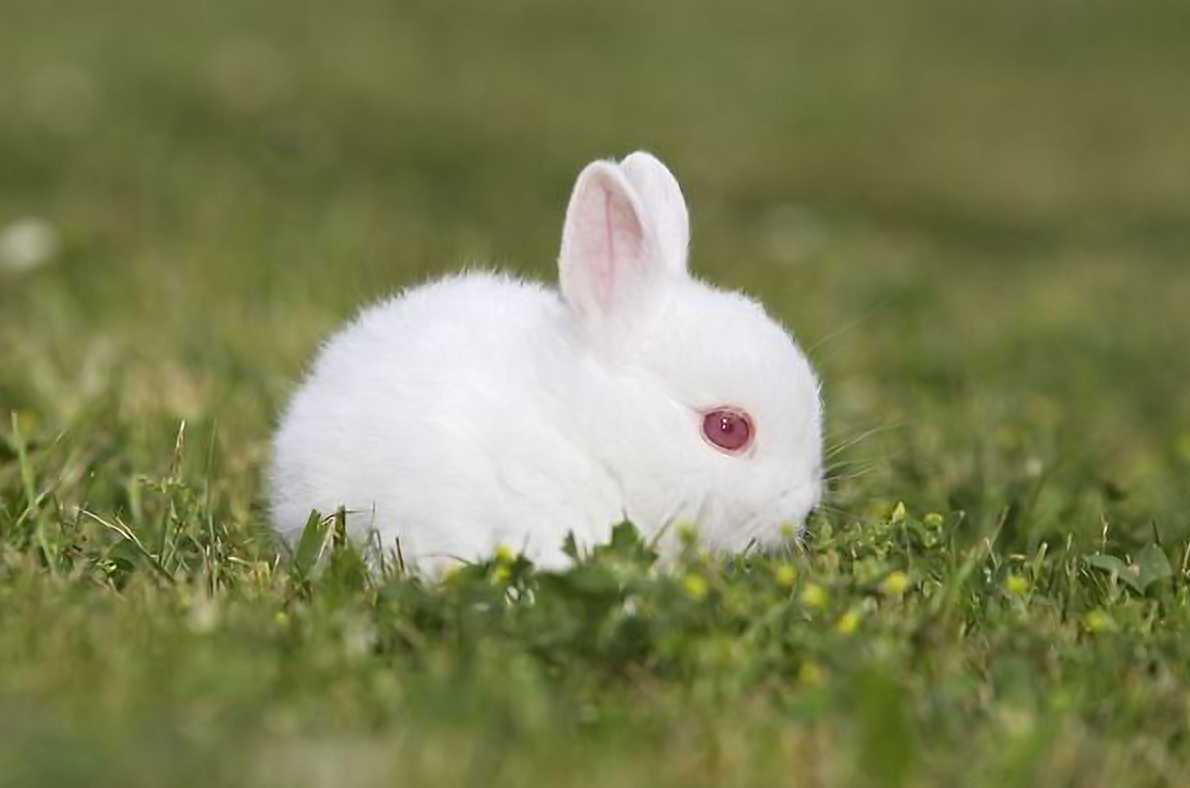 Sunlight and your ruby-eyed white furry friend might not be the best match.

Yes, a rabbit out in the sun might be good to picture. However, sunlight could be uncomfortable for these rabbits. It can be a strain on their eyes. To add, they are more prone to sunburns and such.

Melanin protects from the sun. As you already know, these rabbits don’t have much melanin as their non-albino siblings. That makes them more sensitive to the UV rays of the sun.

It doesn’t mean they can’t play out in the sun. They can, but you want to ensure they can get away from the sun when needed.

What to Know About Albino Rabbits and Vision Impairment

We will get to the second reason in the next part. Before that, let’s briefly talk about the eyesight of our albino friends. If you have a furry friend with a white coat and red eyes, it might be essential to know that they have poor eyesight.

You might see your rabbit moving its head from side to side. You might think this behavior strange. However, you don’t need to worry. It is normal, and this behavior even has a name! Scanning. Now we got that out of the way. Let’s discuss the other reason why your rabbit might have red eyes next.

Rabbits With White Fur Have Red Eyes Because of Eye Problems 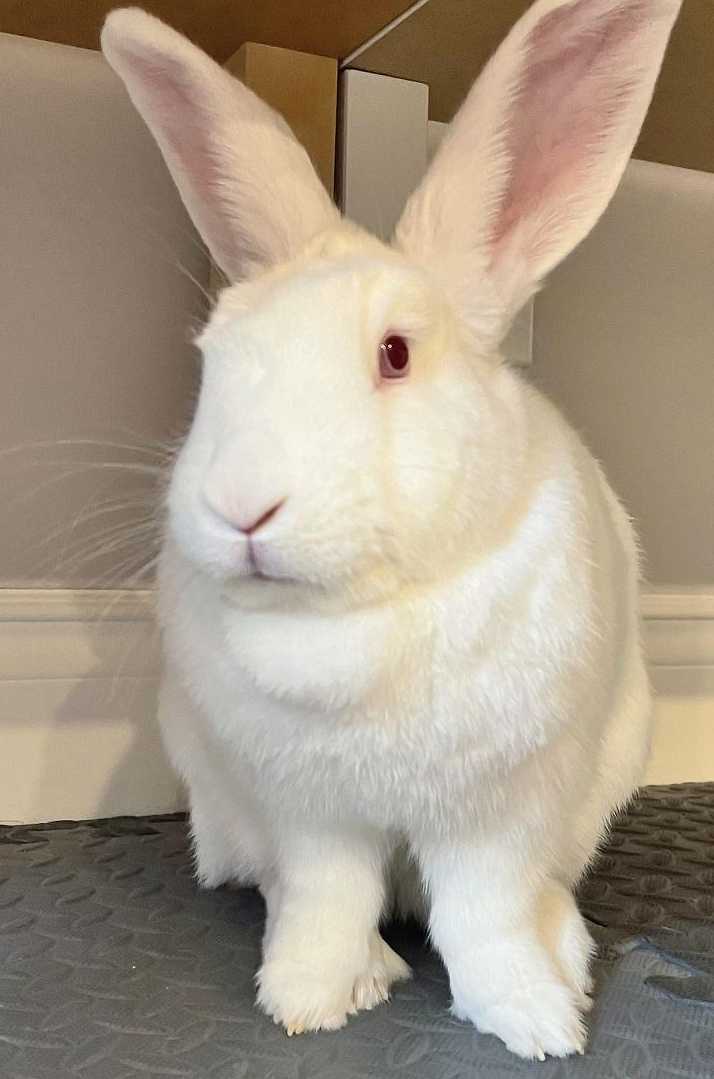 Earlier, we said that if a rabbit’s eyes are actually red and don’t only look like it, that could be a sign of trouble. That is because the rabbit might be having some eye problems hence the red coloring. Our furry friends could experience eye problems due to allergies, infections, and all sorts of other things.

Is the little critter experiencing eye problems? It would be a good idea to bring this rabbit to the vet as soon as possible.

However, that might get you wondering how you could tell if your white furry friend has red eyes because of albinism or eye problems. Well, red eyes are not the only symptom of the presence of eye problems. For one, you can take a closer look at their eyes. If it is swelling or you see some crust, it would likely be an eye problem.

Now, you might be wondering if REWs are the only ones affected by eye problems. No, they are not. It might be a little more challenging to tell if they have eye problems as they naturally look like they have red eyes, but all rabbits (regardless of coat or eye color) could experience eye problems.

Are There White Rabbits with Red Eyes in the Wild? 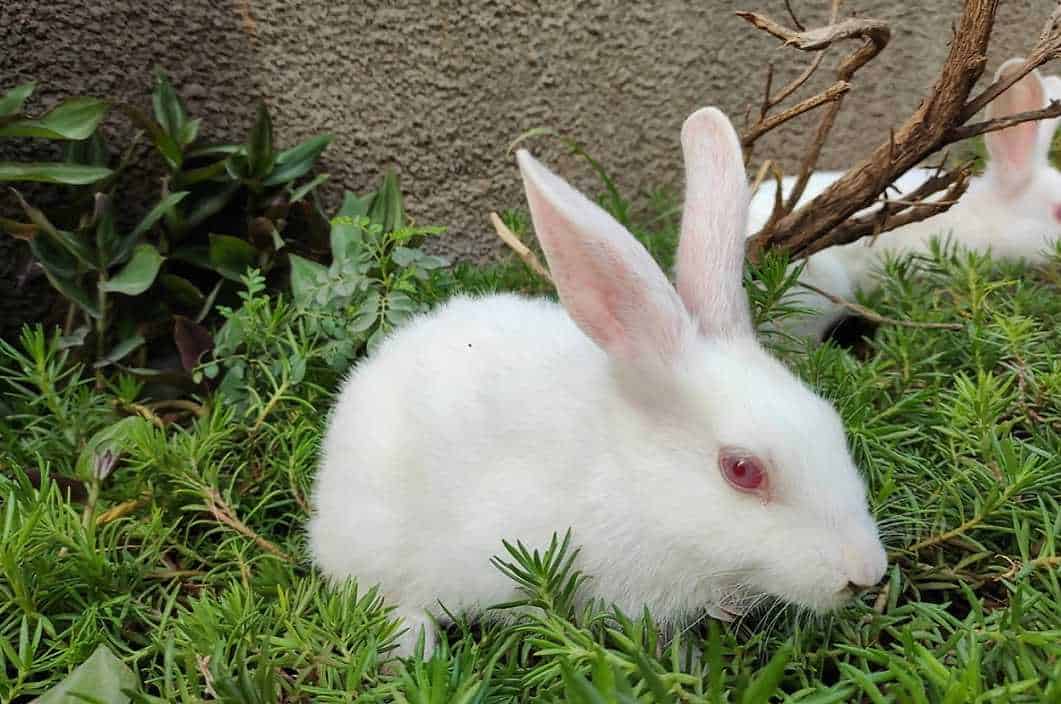 Why? There are several reasons, but for one, these rabbits have a lower chance of surviving out there. Their white fur, paired with their poor eyesight, often makes them good targets for predators. Their coats make it easy to spot them.

Their poor vision doesn’t make it easy to spot enemies. Additionally, if you can remember, earlier, we said that they are more sensitive to UV rays. As you can imagine, they spend most of their time underground. 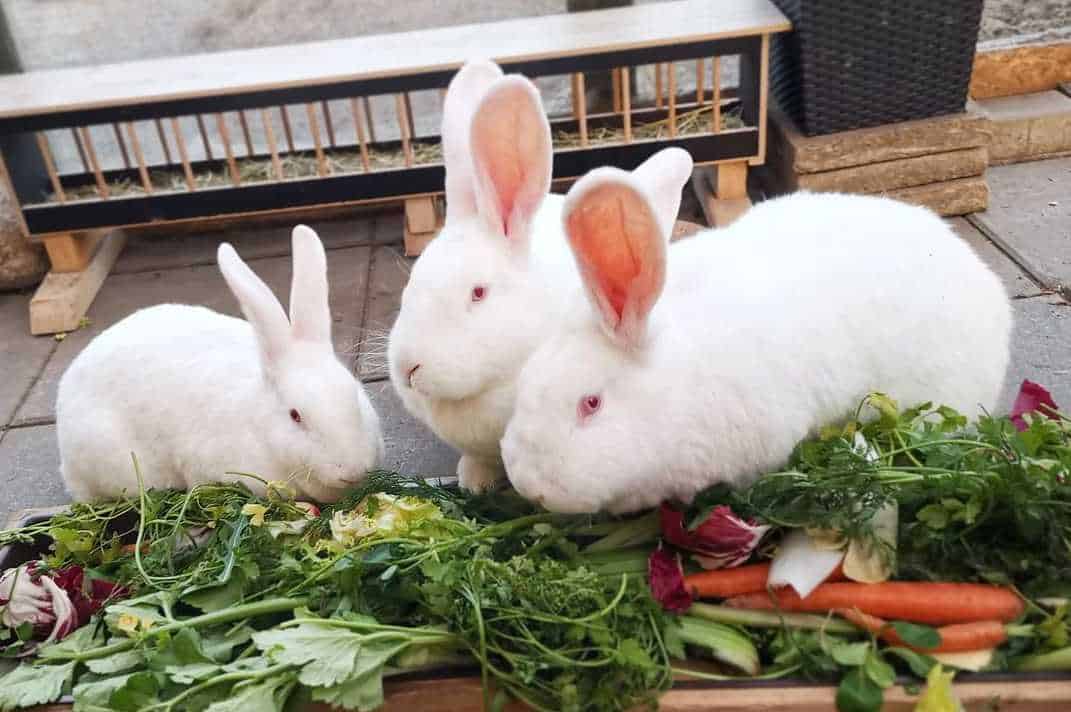 First on the list would be the Florida White. It is the only rabbit that will always fit the category. They always have a beautiful white coat and stunning red-looking eyes.

Lionhead rabbits come in many different colors, and there is also a REW variety. This rabbit is a good option if you want a white and fluffy rabbit with red eyes!

If you want to bring on the fluff, you might want to consider the Giant Angora then. Again, this rabbit comes in a variety of colors. And yes, there is also a REW variety!

There are many more other breeds that come in a variety with white coats and red eyes. Additionally, if you are looking for some color, there are also some that have some pigments in them like the Himalayan. There are tons of options! You can take your pick!

Why do white rabbits have red eyes? Today, we answered that and so much more! First, we discussed that while most rabbits with white fur might look like they have red eyes, they don’t. And if they do, there’s a big chance it’s not good news.

After that, we talked about the two reasons why white rabbits might have red eyes or eyes that look red.

The first and most probable explanation is albinism. These rabbits would have white fur but not red eyes. They would only look like they have red eyes. These rabbits have much less melanin than the others and lack natural pigments. With that, they would sport white hair and eyes that reflect the color of blood vessels (hence making them look red).

The second reason would be eye problems. With this, a rabbit could really have red eyes. However, as you might already know, it’s not good news. Finally, we talked about REWs in the wild and domestic REWs you could take home.

We hope we got to help! Check our other discussions if you have any other bunny concerns. We might have just the answer to make your bunny binky!