Are you wondering why do rabbits dig holes?

Well, you don’t have to wonder anymore because we will be answering this question here. Today, it’s going to be all about rabbits, their digging, and the many holes they leave behind.

If you’re ready, let’s go ahead and jump right into this rabbit hole!

How Do Rabbits Dig Holes? 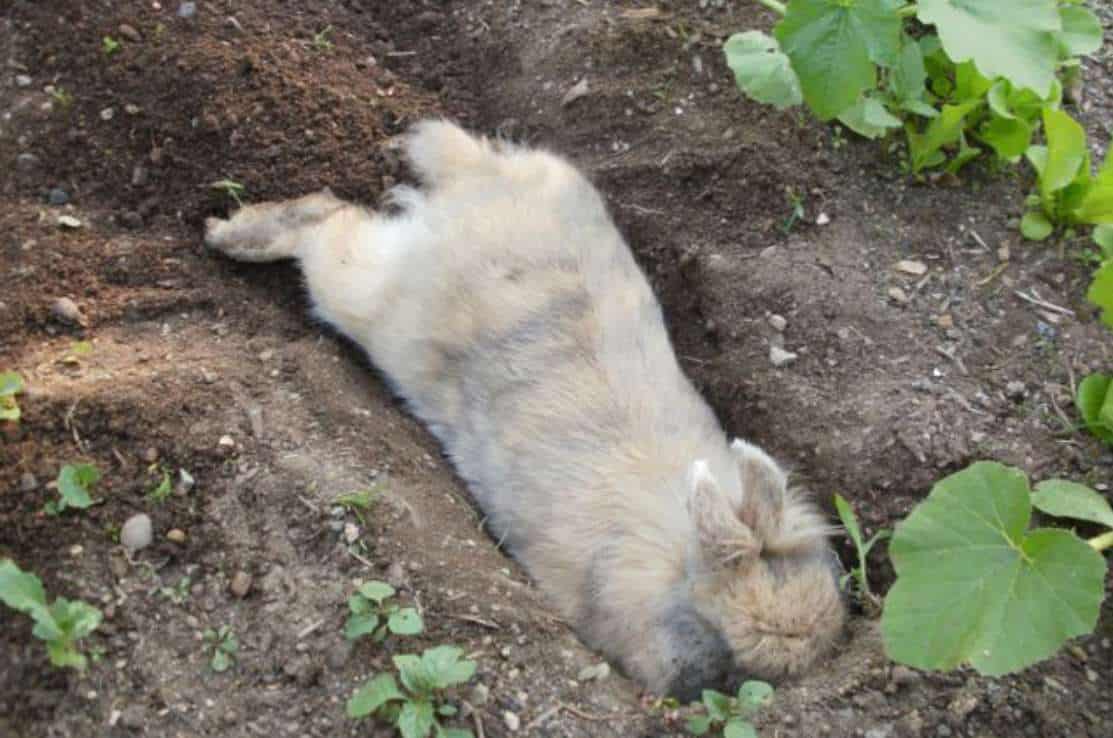 Before we continue, let’s quickly take a look at how these little furry creatures even dig holes in the first place.

These guys use their forepaws to dig. If the area they are eyeing is compacted, they would first loosen it up with their forepaws. After that, they would then throw the debris under and behind them. It’s not the fastest way to do things. With effort and time, though, it gets the job done.

As you can see, rabbits may look all sweet and cuddly, but don’t let these guys fool you. They’re mean digging machines.

Going Down the Rabbit Hole: Why Do Rabbits Dig Holes?

We now know how rabbits dig holes. Next, let’s take a look at the eight reasons why they do. 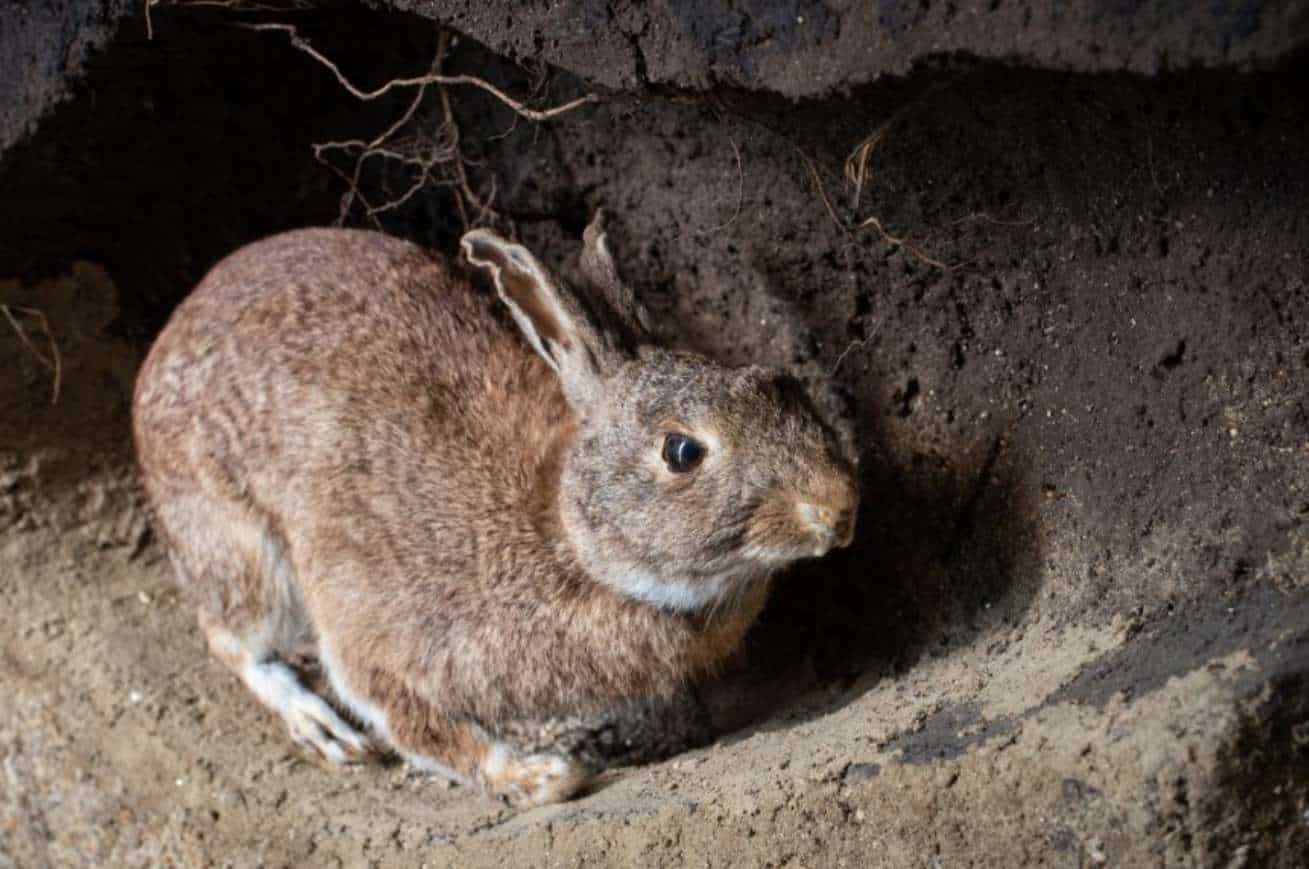 Out in the wild, one of the main reasons rabbits dig holes is shelter.

As you might already know, most of our rabbit friends in the wild live in a burrow or an underground den.

Now, if they are in a fluffle (i.e., a group of bunnies), it would be a warren, and a warren is a bunch of connected rabbits dens. In this case, you could also say rabbits dig holes to shelter their rabbit community!

Whether alone or in a colony, the holes are often where most rabbits live and spend most of their time. As you will see later, this is where many of them also spend their first few days on earth.

2. Survival: Rabbits Dig Holes to Survive Out in the Wild

Another reason rabbits dig holes is to survive out in the wild.

The holes they dig do not only provide them a place to rest and sleep. Their burrow also shields them from harsh weather conditions.

It doesn’t end there, though.

The holes they dig also serve as a safe haven. As you might already know, our furry friends can’t really put up much of a fight when faced with their predators. To survive, they need to run and hide. Their dens provide them a place to get away from their much larger predators.

Rabbit hole openings are often only 10 to 15 centimeters wide. Their tunnels could reach a depth of 4.5 meters, and their burrow as big as 45 meters.

As you might expect, their large predators won’t be able to get in their dens that easily. Additionally, you can expect their warrens to have more than one exit. If their burrow can’t stop their predator, it could, at the very least, buy them time to run.

Additionally, a mama rabbit could dig a hole when she gets pregnant. As you might expect, a doe is pretty vulnerable when giving birth. The burrow allows mama rabbits to give birth to her young ones without worries.

As we discussed before, kits or baby rabbits are altricial when born. That means they are pretty vulnerable and helpless at birth. The burrow could also protect the young ones while they take their time to grow.

3. Stress: Rabbits Could Dig Holes to Let off Steam 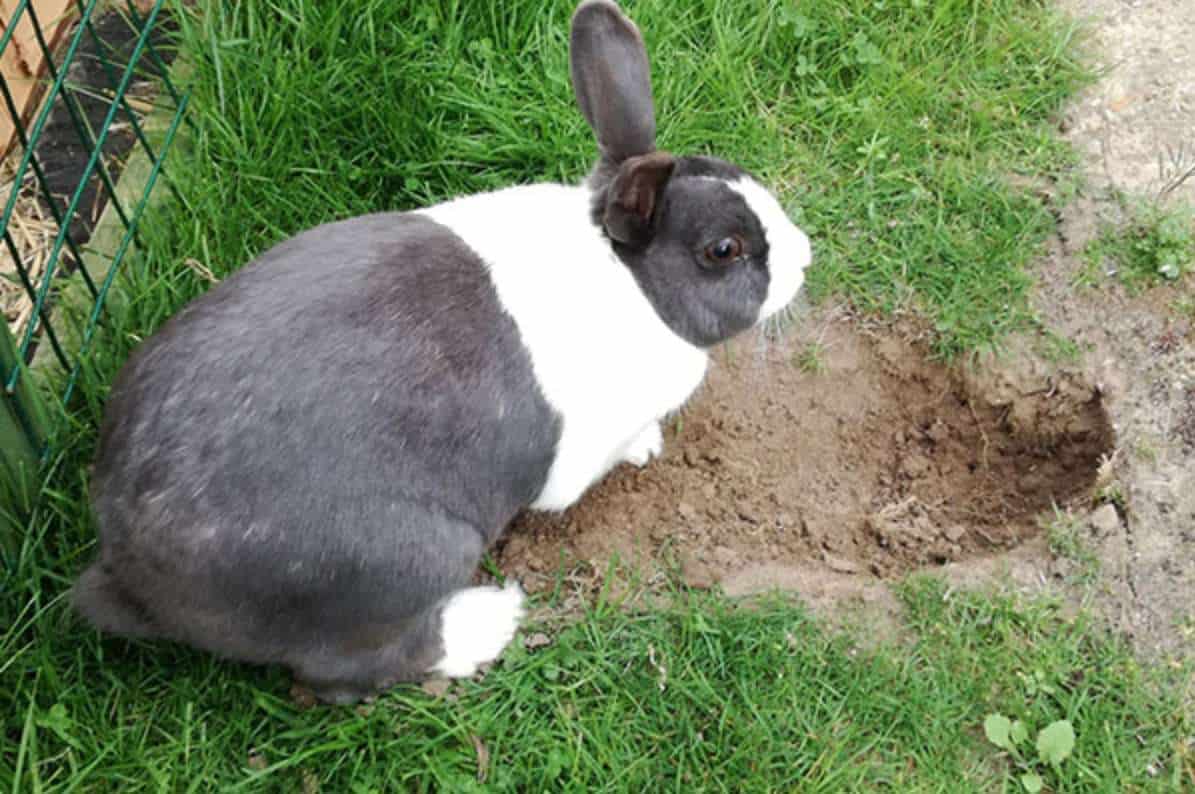 So far, we’ve only talked about our furry friends out in the wild.

As you might already know, domestic rabbits don’t have to dig for shelter. They also don’t need to do it to survive. However, you might still notice your little furry friend digging in its cage. Why?

Our little rabbit friends could easily get stressed. One reason they could be digging nonstop is that they are stressed. If you notice all your rabbit does is dig, dig, and dig, you might want to check out if something is stressing the little one out.

4. Attention: Rabbits Could Dig Holes to Get Your Attention

On the other hand, another reason your rabbit might keep on digging is to get your attention.

It could be that you gave your rabbit some attention the first time it showed this behavior. Who could blame you or anyone, at that matter?

It’s natural we’d get worried when our furry friends start acting differently! However, this could have conditioned the little guys that their digging would mean attention.

As you can see, it’s a little like operant conditioning.

5. It’s Innate: Rabbits Dig Holes Because It is in Their Nature 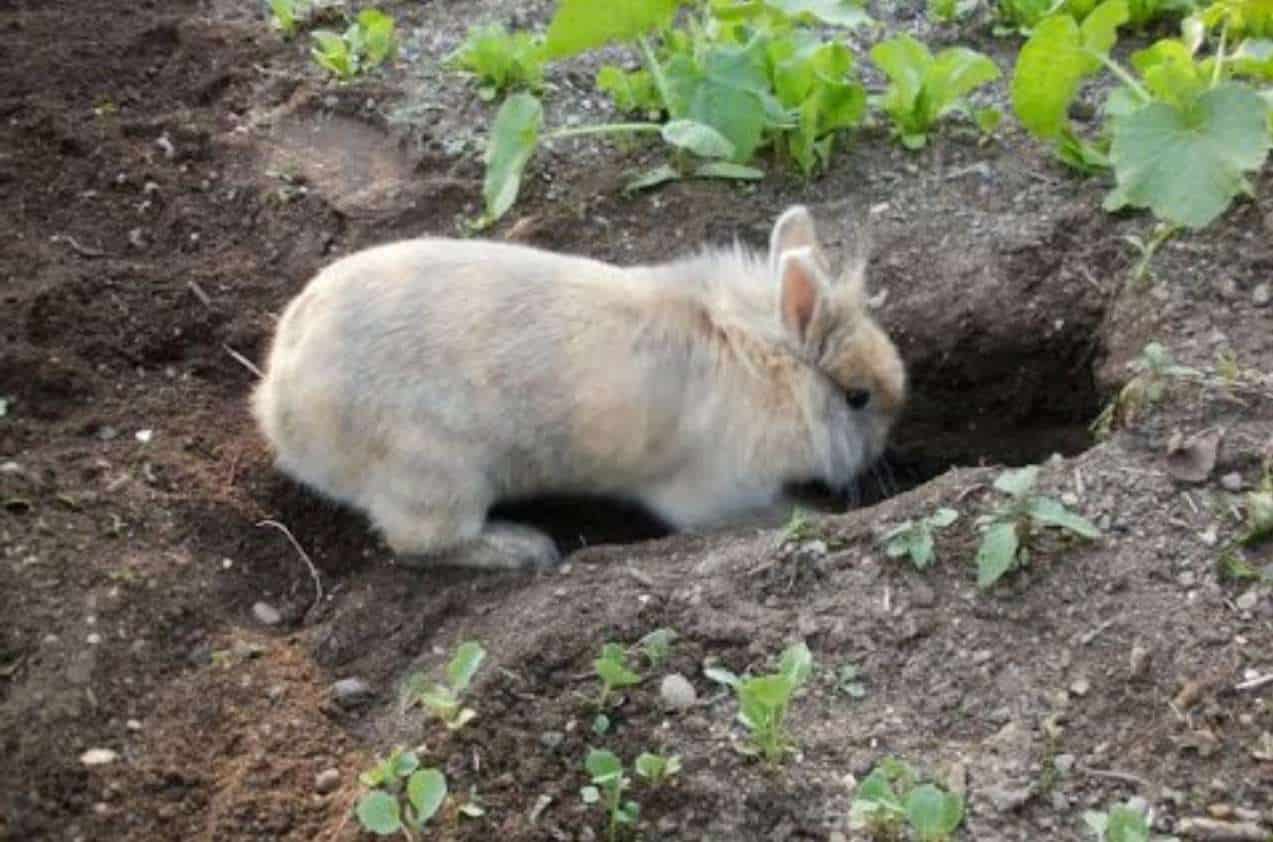 Your rabbits could be digging just because they are born with a tendency to dig. It is in their nature.

As we’ve said above, your little furry guy at home doesn’t need to dig for the same reasons our wild furry friends do. You shelter them, give them the protection they need, and make things favorable for them.

There’s really no need for burrowing when they’re in your care. True. However, as we’ve said, digging is in their nature. Whether they are out in the wild or not, they would most likely be inclined to dig at some point.

Whether in the wild or not, most rabbits are born with the tendency to dig holes. There are only some exceptions, like cottontails. They might use the burrow of others, but they are not known to make their own.

We’ve got the top five reasons down. However, that’s not all there is to it.

A rabbit could also dig holes simply because it is bored.

If you have a furry friend at home, you might want to invest in a digging box then! It could help keep them entertained and occupied. It could also help get them the physical and mental exercise they need.

7. Grooming: Rabbits Could Dig Holes to Try and Groom Themselves

Another reason rabbits might dig holes is to groom themselves. Now, you might think that doesn’t sound right. After all, dirt could get their furs, well, dirty. That might be true, but digging could also help trim their nails. Like their teeth, rabbits also need to trim their nails.

8. Food: Rabbits Could Dig Holes to Search for Food

Finally, your furry friend at home and our furry friends out there could dig holes to try and find food. These little guys could feast all day long, after all. They have big appetites and believe food is worth the effort. It’s a little like digging for buried treasure!

Should You Let Your Rabbit Dig Holes? 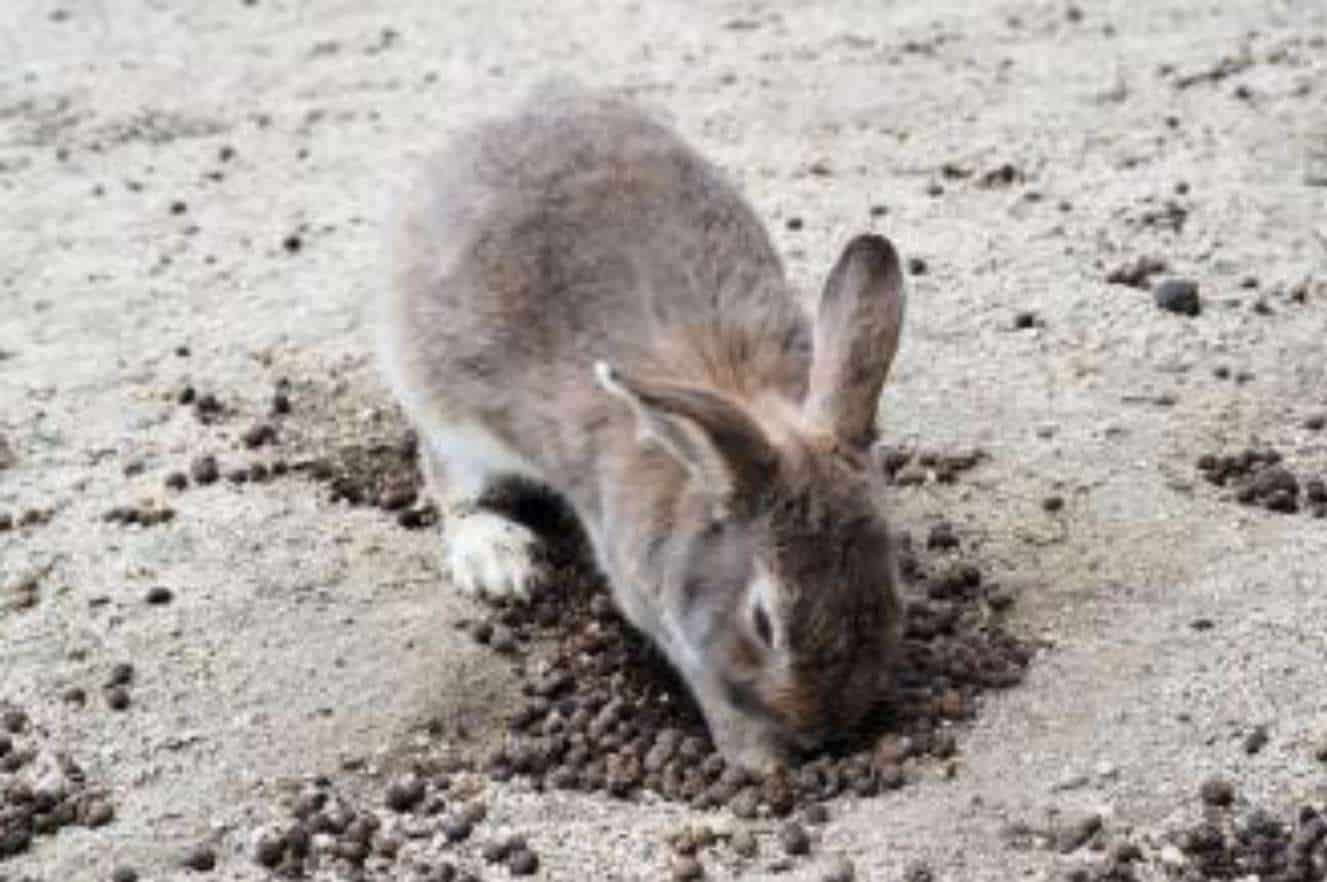 We now know how rabbits dig holes and why they do. Now, you might wonder if you should let your little furry friend do so. Well, let us show you why you should and should not. After that, you could decide what would be best for your little pal.

Why You Should Not Let Your Rabbit Dig Holes

You should not let your rabbits dig out in your yard if your area has lots of vermin, like snakes that live or could live underground. You don’t want harm to your rabbits, after all!

Additionally, you don’t want to let them dig if there are things in the area that they shouldn’t eat. As we’ve said above, these little guys have a large appetite. It’s unlikely they would say no to food.

Why You Should Let Your Rabbit Dig Holes

On the other hand, there are tons of reasons to let your bunnies dig if you could!

It’s great for your furry friend mentally and physically.

For one, it allows your little guy to exercise. Not only that, though! It lets your little guy exercise in a fun way. To add, you could say it is also good for their mental health. Not only would digging be a fun activity, but it could also be a way for them to let off some steam.

It might be best to offer them a digging box, though. Not only don’t you want your flower beds ruined, but you also want to give them a safe playing space.

Why do rabbits dig holes? Today, we talked about eight reasons why they do!

First, we learned that rabbits out in the wild dig holes because it is essential in their lives. After that, we also discussed how rabbits could dig holes to let off steam or get some attention.

We also talked about how bunnies could engage in this activity simply because they are bored. Then, we also learned that they could dig holes to try and groom themselves or look for food.

Of course, we can’t forget that rabbits could make holes because, well, they’re rabbits. They’re born with the tendency to engage in this activity!

We hope we were able to help you with this concern. If you ever find yourself in another rabbit hole, then feel free to come and visit our burrow!