Why do rabbits binky? Well, rabbits can be expressive creatures. They can be happy at times. You can see them leaping into the air. Sometimes they playfully twist their bodies.

These actions reflect that your bunnies go binkying. What exactly does “binky” mean? Read on and enjoy watching your pet bunnies binkying later.

A binky happens when a bunny makes a crazy jump and a weird twist. A rabbit leaps into the air while twisting its body and kicking out its hind legs. It can also look like a fast head flip and a slight ear wiggle.

Binkies happen in a split second. A rabbit can binky whether it’s standing still or racing. So, keep a watchful eye. Depending on its mood, A rabbit may execute one binky or several in a row. There’s a good chance you’ve seen a bunny binky but didn’t realize it!

Some binkies look like great gorgeous jumps. The rabbit could flip around in the air if it twists too much. It can also do binky with tiny twitches when it zooms and moves around.

Binkying is an instinctive habit. It’s not something that you can train your bunny to do. A rabbit will binky only when it feels like doing it. A bunny can do binkies because of its musculoskeletal system. Its bones are small, but its tendons and muscles are strong.

Binkying might include twists, somersaults, and other acrobatics. It’s determined by the rabbit’s capacity and the degree of the stimuli used.

Rabbits may fly rather high in the air when they binky. They can leap four feet above ground vertically. They may reach this height due to their powerful hind legs. Those legs function as a spring, propelling them up in the air.

Rabbits also do binkies to bond with you. The display is for your eyes only. Your pet rabbit becomes shy and hesitant to perform if your friends come around. Remember that rabbits get anxious when they’re near strangers. As a result, they can be unwilling to binky.

They also clam up and stare at you suspiciously when you take out a camera. They might think you’re weird when you try to photograph them. So, they’ll unlikely do binky too.

There are two kinds of rabbit binkies: full and half. A full binky looks like a quick, unprovoked leap up in the air. The bunny also does a tiny, opposite-direction twist of its head and body.

A rabbit can do two or even more full binkies before landing back to the ground. This happens when the bunny feels very excited. It can even grow overly enthusiastic and do many binkies in a row.

In contrast, a half binky is distinguished by a sharp head flick, causing the ears to twitch. However, some rabbit owners misinterpret the signs of itchy ears or head tilt with a half binky.

A head tilt is a disorder in which a rabbit’s neck twists and causes its head to tilt to one side. There’s a distinction between a real binky and a head tilt problem. A rabbit can readily adjust its posture after doing a binky. But, you cannot correct a head tilt naturally. 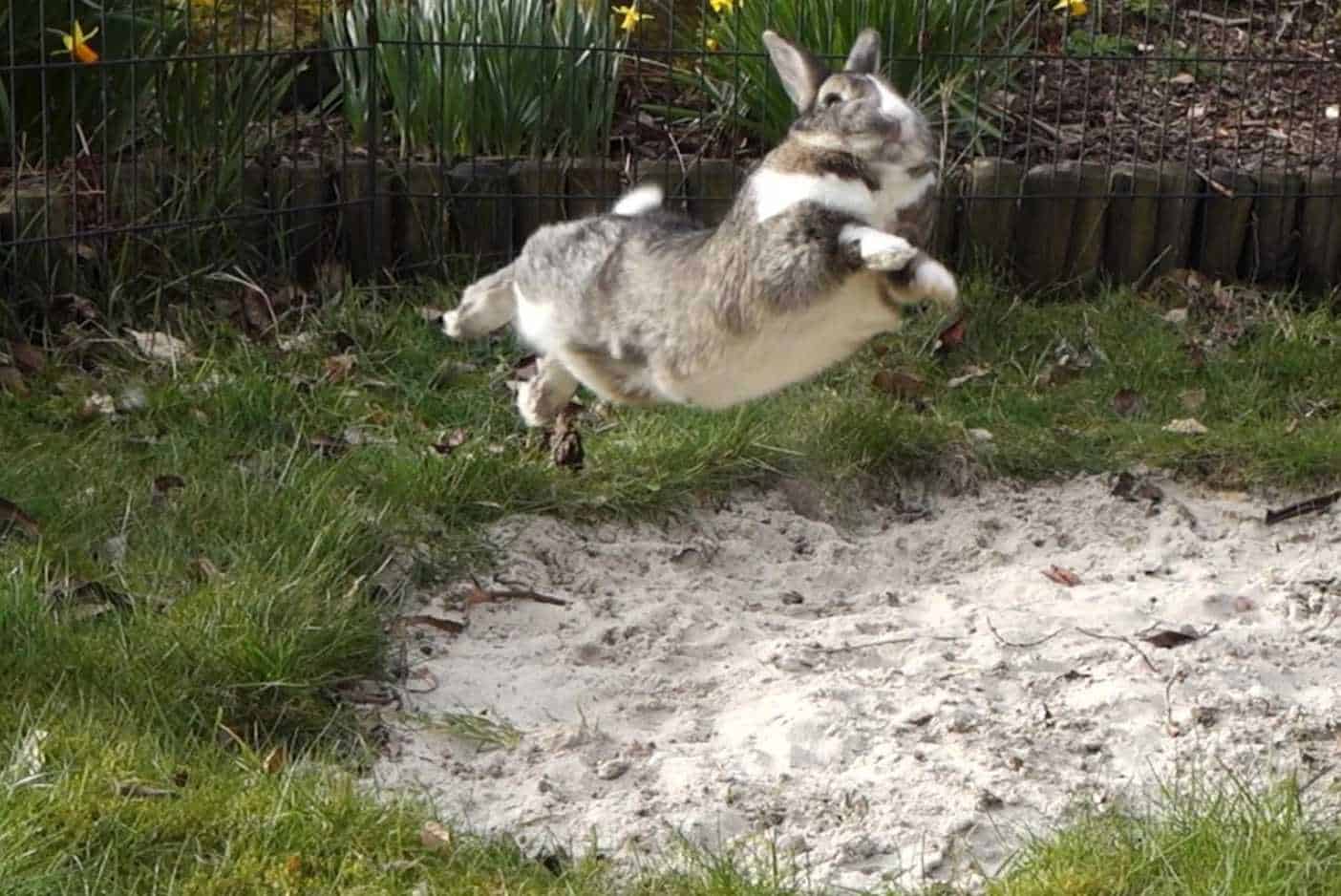 Rabbits do binkies when they’re happy and satisfied in their environment. Binkying is a sign of contentment in rabbits. Here are four causes why a rabbit will binky, all of which are positive:

Have you ever leaped up and down with delight when your long-awaited Amazon package is finally delivered? Your bunnies are equally thrilled.

Bunnies get excited when they sniff their favorite goodies, play with their chew toys, or even sight their owners. Rewards like toys and treats can cause them to be overjoyed. Rabbits are fond of fruits and veggies. You can use these as incentives when training your bunnies.

The rabbit may use a binky to communicate their happiness. These are favorable experiences to them. They could be looking forward to eating something tasty. They might also be appreciative of what they have already eaten. 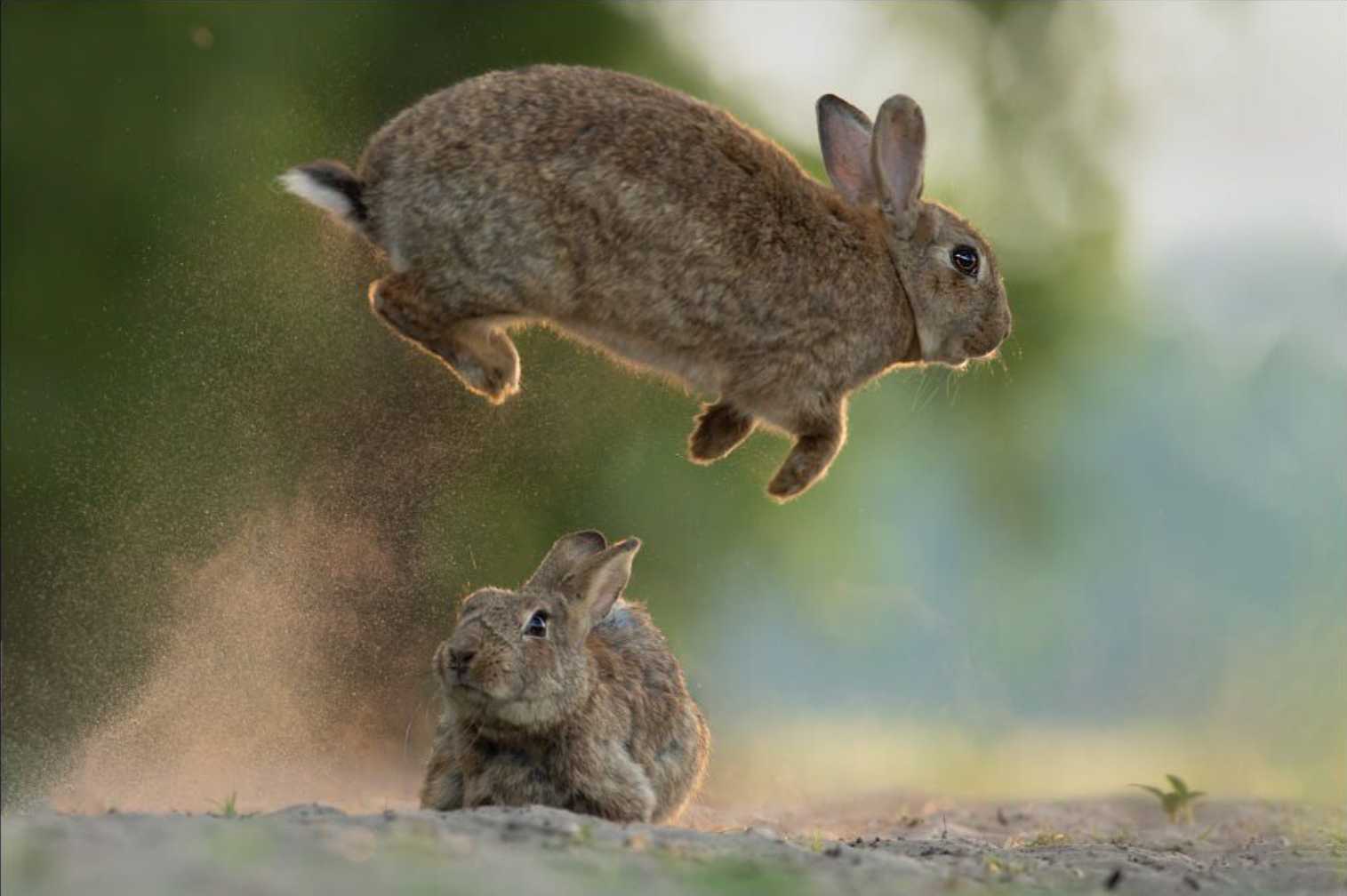 Rabbits are friendly creatures. They leap and hop when playing with friends. They’ll binky around to encourage you to continue playing with it.

Binkying is a typical play behavior, especially among domestic rabbits. It’s a rabbit’s way of communicating that it’s having a good time. It doesn’t feel any sense of danger.

Adult pet rabbits also do binkies when they’re happy. They can be very playful, especially those who have been well-socialized and have lived a happy existence.

Your rabbit will likely be bored if it has been left alone the entire day. It can have a lot of pent-up energy. Your bunny will release through some binkying.

Also, keep in mind that bunnies are crepuscular.  They are most active around dusk and dawn. If you want to watch your rabbit put on a show for you, keep an eye out during these hours.

Your rabbit can also turn their food into energy when its metabolism is fast. It will likely do binkies to discharge this energy.

Conditioning has a big influence on animal behavior. If you reward your rabbit every time it responds or does tricks, it will most likely respond again the next time.

Binkying works the same way. Your rabbit notices if you pay attention when it binkies. So, it’s very probable that it will do it solely to attract your attention.

Isn’t that wonderful? Your bunny adores you and wants to spend time with you. So it will play the fool only to win your attention.

Rabbits can also bond closely with their owner. They miss you when you’re not around. They anticipate spending time with you. So, when your rabbit sees you, it can perform binkies to invite you to play.

Do all rabbits binky? 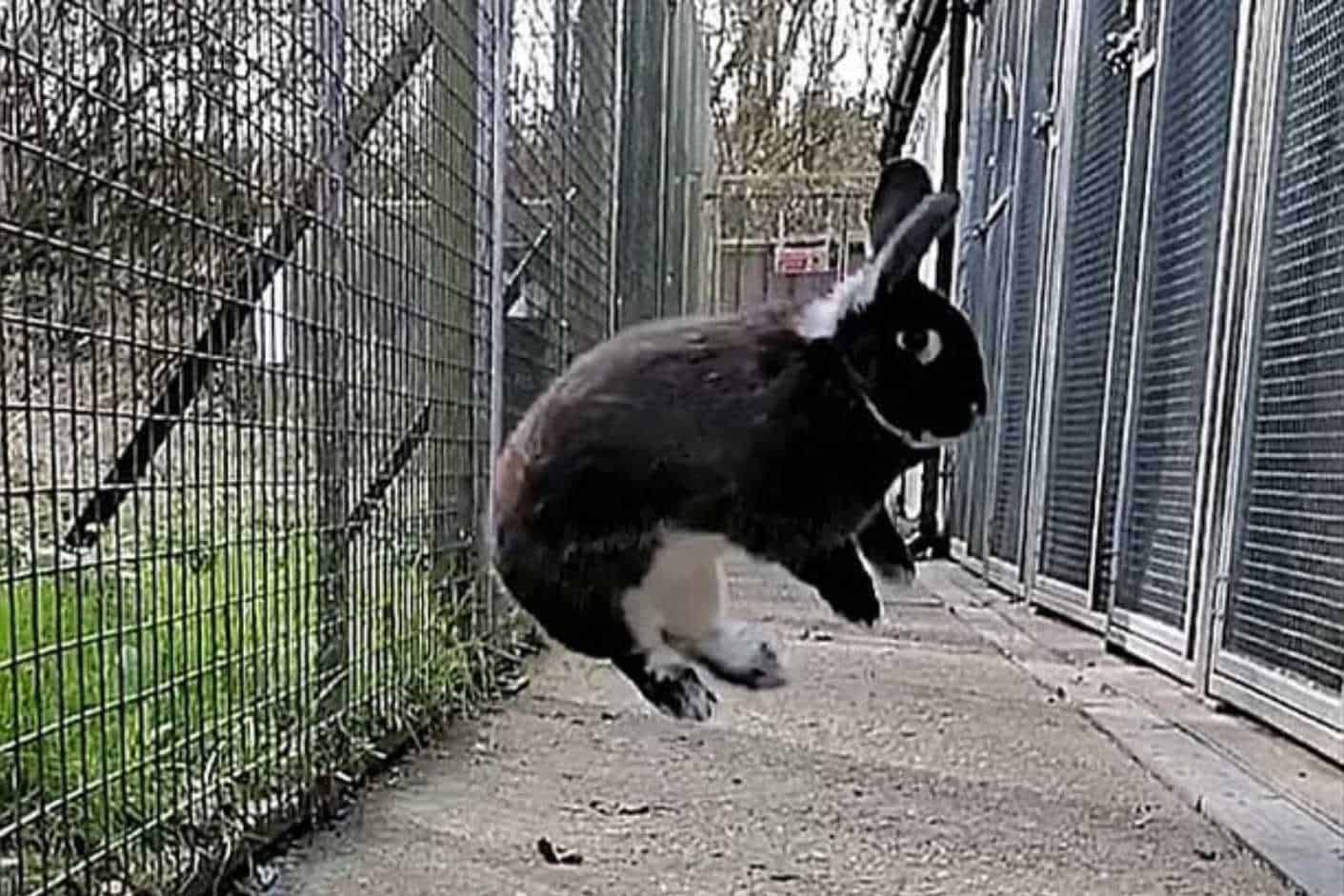 Binky isn’t something all bunnies do. Some rabbits are more shy and quiet. They would never consider binkying in public. If your rabbit never binkies, you should rule out other possible causes before concluding it’s simply personality.

Here are some conditions that could make a rabbit not do binkies:

If your bunny doesn’t seem to suffer from any of the problems above, your bunny’s nature probably doesn’t lend itself to binkying.

Don’t be unhappy. Instead, be glad that your bunny isn’t sick or unwell. Then keep in mind that rabbit binkies aren’t the only way bunnies show they’re happy.

Some bunnies love to flop. This indicates a comfortable and content rabbit. Others may choose to jump on your lap for some cuddling time. Some may simply stay near you.

7 Tips to Make Your Bunny Binky

Rabbits do binkies when they’re happy. Helping them binky more implies encouraging their happiness. It isn’t something you should try to impose. Don’t become irritated if they don’t comply.

Furthermore, each rabbit is unique. Binkying amounts will vary depending on their preferences and energy levels. Here are some tips you can use to encourage your rabbits to binky.

A rabbit’s basic care requirements are minimal. But, ignoring them can have major consequences for their health.

Make sure they are eating a healthy diet that meets their nutritional requirements. You can supplement their diet with veggies and fruits to make your bunny binky more.

You may have probably given your dogs and cats plenty of toys. Have you done the same with your bunny?  Rabbits require much in the way of environmental enrichment.

You must provide toys wherever possible. Also, ensure that they are sufficiently stimulated.

Space is also an element in a rabbit’s contentment. Rabbits usually divide their cage into multiple areas. So, ensure that they have enough space to do what they require. Binkying is included in this.

Make sure that each rabbit has enough space if they cohabit with others. Rabbit runs are also essential to allow them to stretch their legs. You may see a bunny binky frequently on a run since it’s happy to be there. 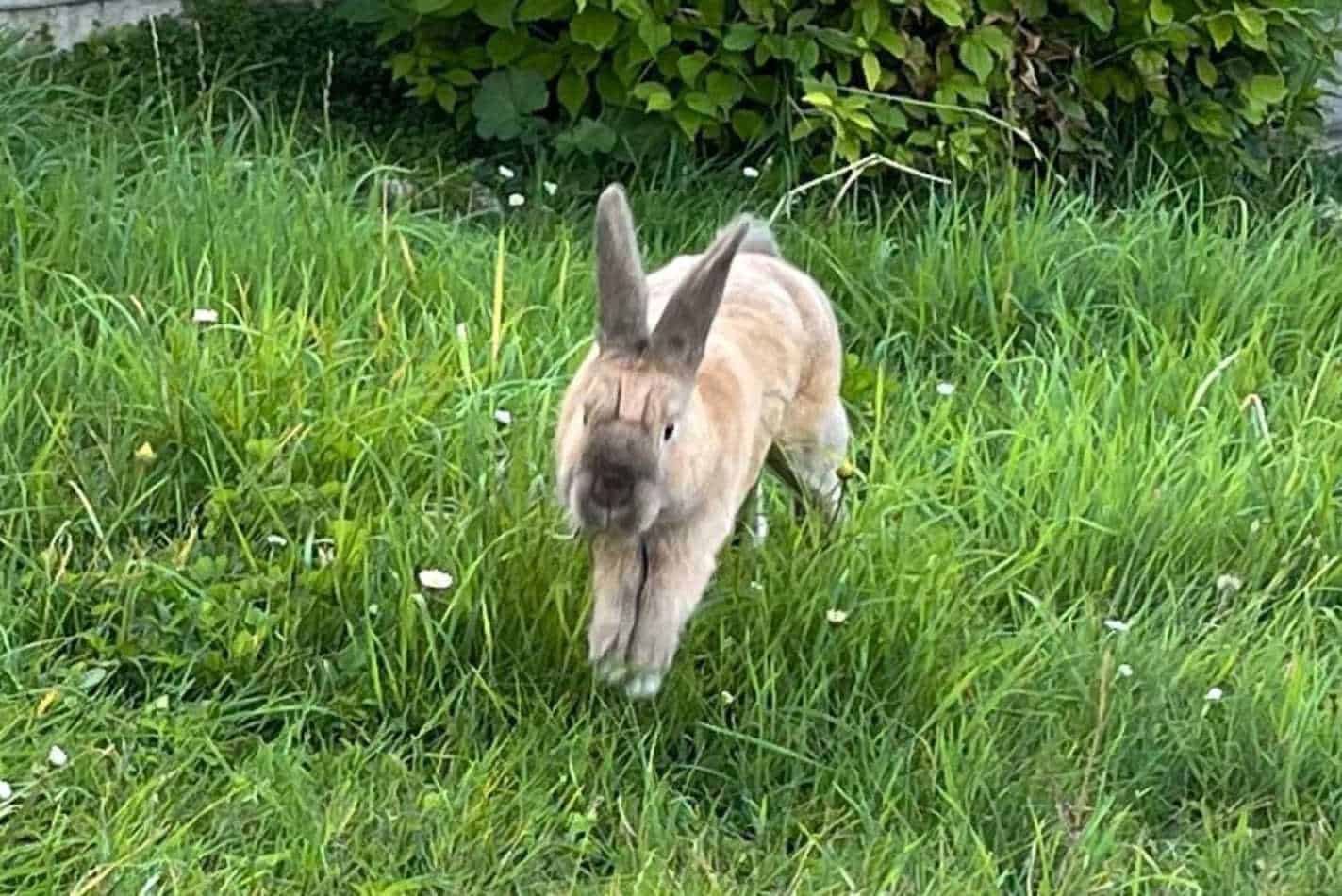 Get to know your bunnies. Understand what makes them happy or sad. Figure out how to support their happiness.

Knowing your bunnies is one of the most enjoyable elements of having a pet. Once you’ve known them, your bond may be one primary reason they binky in the first place.

Play with your bunny

There’s a good chance you’ll notice a binky if you interact with your bunny. Rabbits are social animals. They like it when they get to socialize and play with their owner.

Tease them with their favorites

Does your bunny love toys or treats? Get those items out, and watch as your bunnies become enthralled.

Perhaps give that chew toy and treat container a good shake. Excitement is a good reason for rabbit binkies. Getting those items out might just earn you one.

If your rabbit is sick, it will not do binkies. You should feed it hay 80% and veggies and fruit 20% of their diet. Pellets aren’t required.

Never offer them sugary foods. This can result in oral problems as well as obesity. It’s also a good idea to take your bunny to the vet regularly.

Why do rabbits binky? Rabbits have a very spectacular manner of expressing excitement and delight. They do binkies. However, not all of them can.

Some bunnies binky more and others barely at all. Each has a distinct personality. Understand the causes and triggers so you can encourage your rabbits to binky more.