15 Ways that Rabbits Communicate With Each Other and Human

Just like humans, rabbits can communicate their feelings, even though they can’t speak. As rabbit owners, it is expedient to understand how your rabbit communicates.

How does your rabbit communicate? What does each form of communication mean? How do you know your rabbit is communicating? You’ll find the answers to these questions and more below.

Rabbits are described to be among the most expressive animals on earth. They communicate with each other and their owners all the time. Sometimes, they express a great deal without making a sound. Other times, they are like sounding cymbals.

Their communication sounds include grunting, honking, clucking, purring, screaming, whimpering, growling, hiss, etc. Usually, rabbits make more noise around humans than each other sometimes. These sounds can be deliberate or involuntary.

A rabbit primarily communicates through its body language. Rabbits have better hearing than eyesight, and they communicate their mood through different means. You might find their communication funny, but it isn’t to their fellow rabbit.

By observing your rabbits, you can tell everything they mean or want. Examples of such body language are nudging, thumping, lying down, binkying, touching faces, etc.

Communicate With Each Other 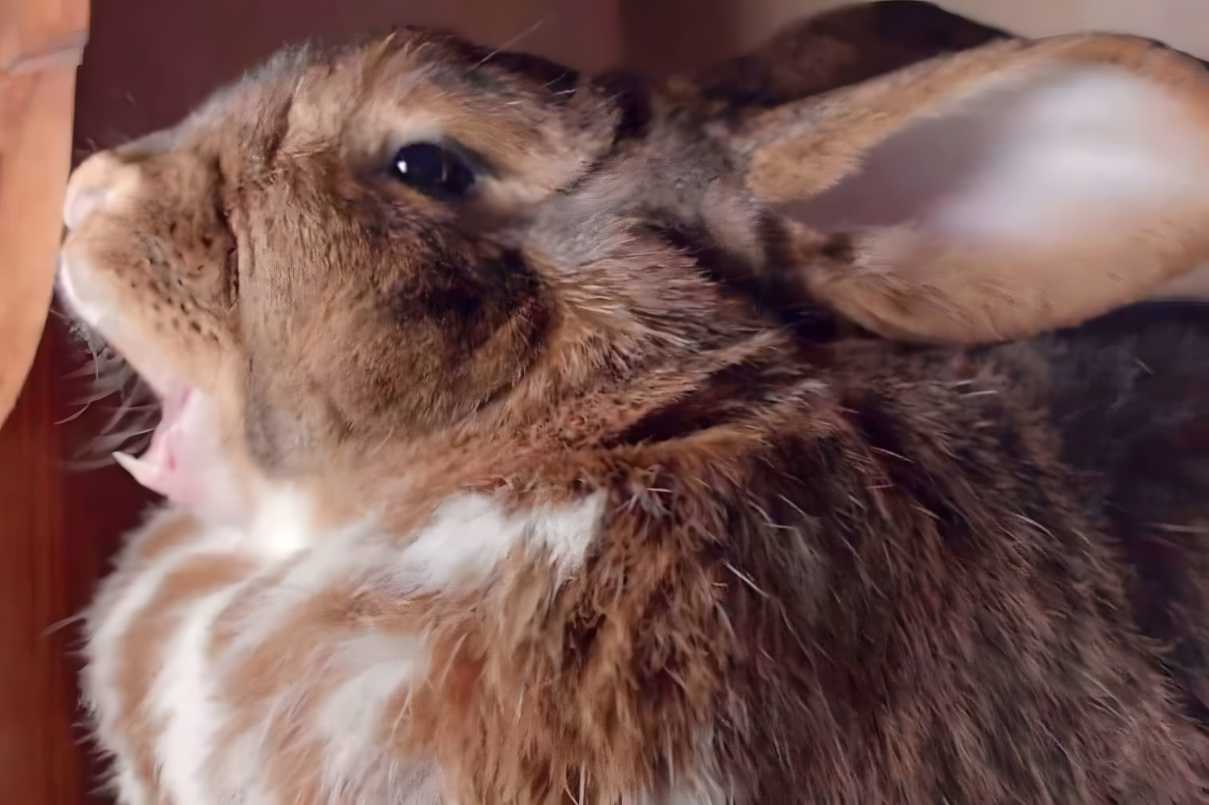 Honking is a rabbit’s mating call when interested in another rabbit of the opposite gender. If the called rabbit returns the honk, both rabbits have agreed to mate, skipping further formalities.

However, if the rabbit hooked at grunts instead, the rabbit who first honked might back out or ignore the grunt and start to mount the other rabbit. Honking starts small and builds up gradually. It is often heard in rabbits that have not been neutered.

Rabbits grunt to show disapproval of the other rabbits. Grunting is very common and somehow translates to “go away.” Rabbits are territorial and will grunt at their companion to scare them from settling on their territory.

A fight will likely ensue if the other rabbit disagrees but wants to settle instead. If both rabbits don’t stop grunting, it is advisable to separate them to avoid a fight for dominance. 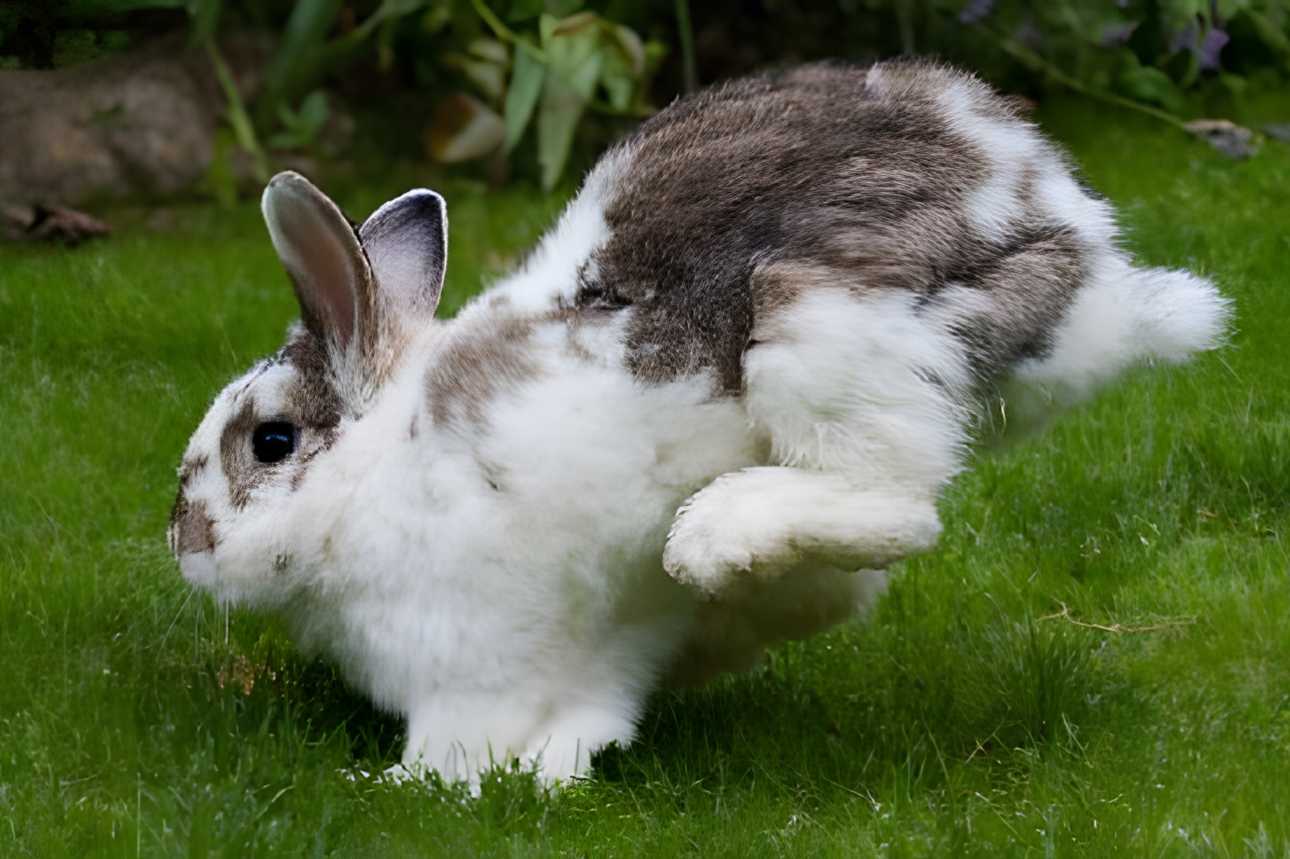 The rabbit’s ears are among its most expressive features. If their ears are fixed to a spot in a straight-up manner, it means something has caught their interest, and they have to decide if they should run or not.

If the rabbit thumps its feet when it is like this, it’s threatened and frightened. Wild rabbits that live underground often thump their feet to warn others of an imminent threat.

Another way rabbits communicate is to lie down with their heads placed on the ground. This means different things to two rabbits as regards authority. Rabbits live by a strict code of hierarchy and hence communicate their position.

Rabbits adopt this posture to show submission to another rabbit, usually known as the alpha. However,  dominant rabbits can also assume the same stance, which means they groom themselves. 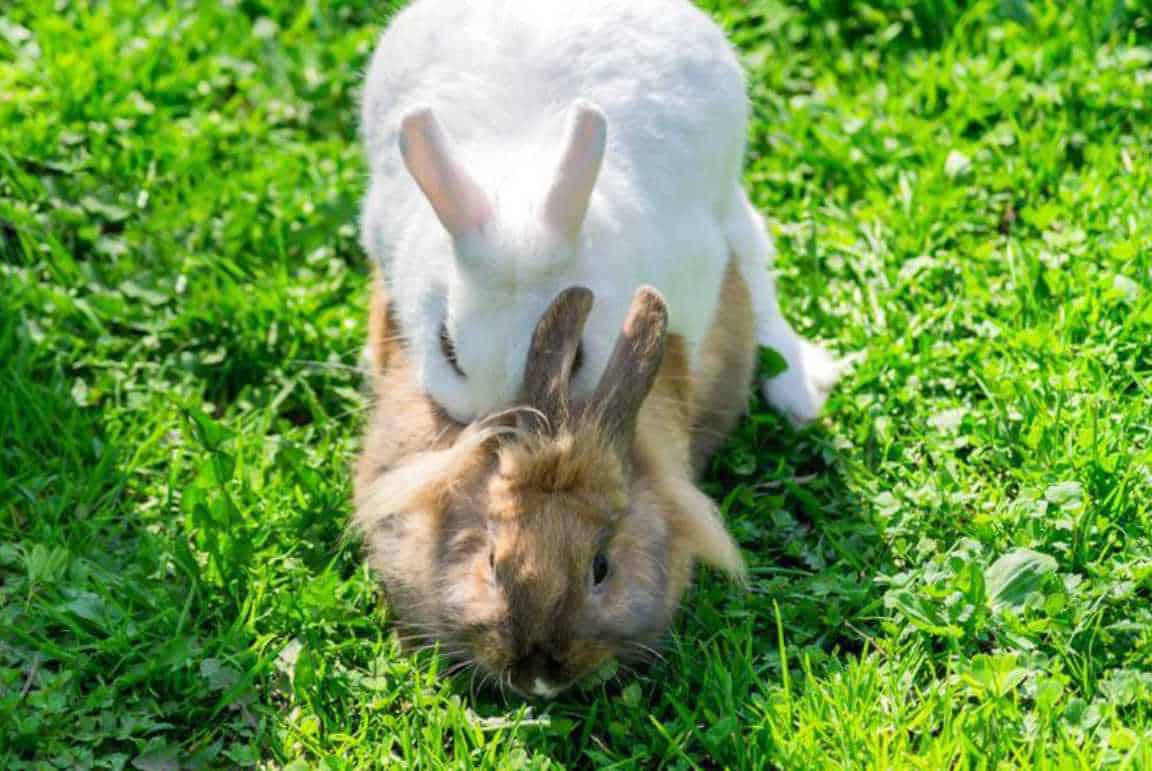 Rabbits are lovely creatures, but you don’t want to get in their bad books. To establish the chief, they fight until one of them emerges as the leader. For instance, if a rabbit mounts another with no honking, both aren’t mating but only struggling to be the chief in that territory.

The response of the other rabbit is significant. Some rabbits easily give in. At the same time, others would not accept and retaliate, using their claws and teeth, which may lead to barbering. You should discourage this act by placing the warring rabbits into two separate hutches.

Rabbits communicate their apologies by touching faces, especially rubbing their noses. If they stay, the apology will be accepted. Also, an apology can be communicated based on a rabbit’s position; the aggrieved rabbits get up and walk away, which means they are still annoyed.

This takes a while as rabbits can hold grudges for days when aggrieved. Separate the aggrieved rabbits until they resolve their issues. 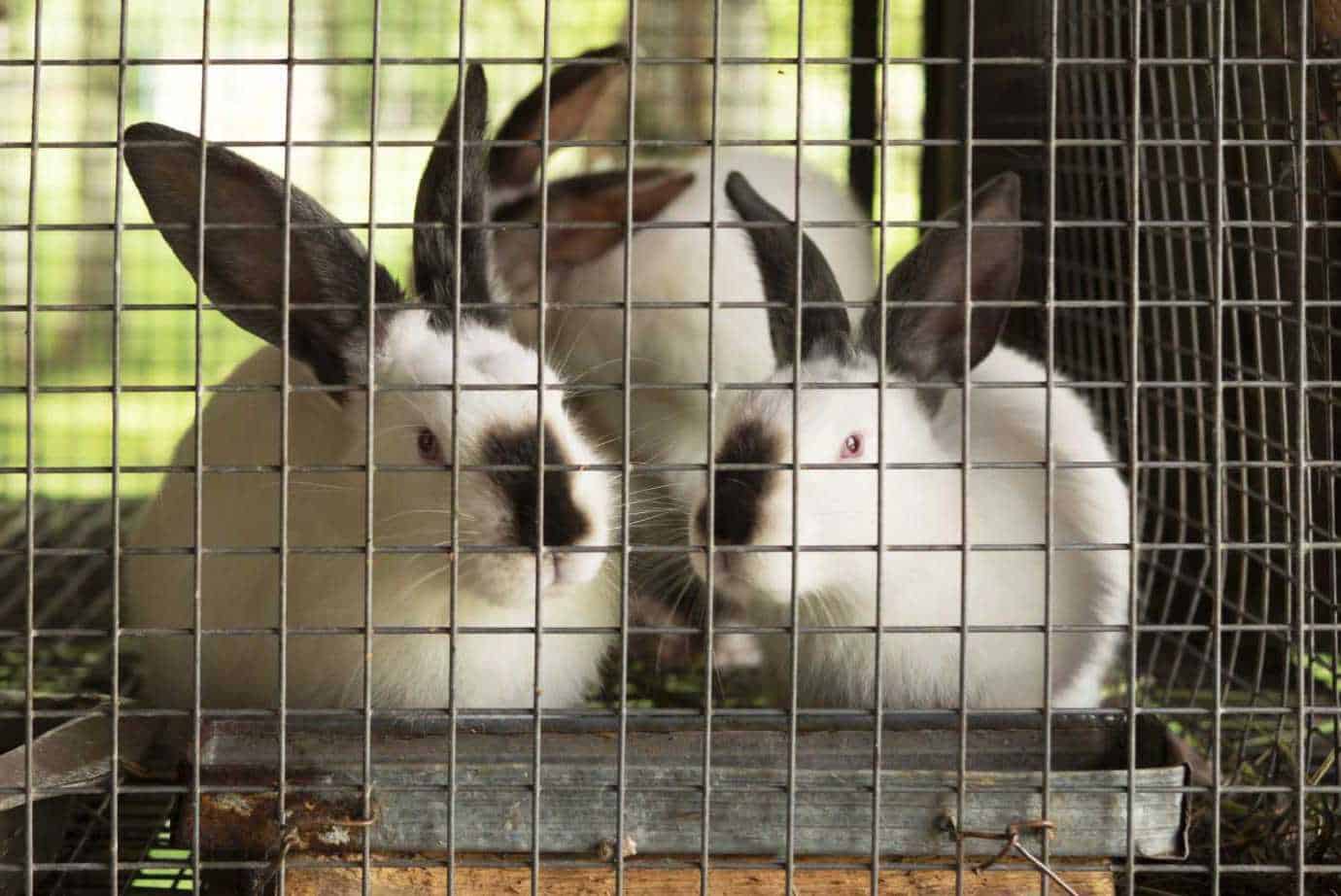 Rabbits are territorial about their environment and should not be placed with other rabbits when they have not bonded. To communicate acceptance or likelihood of sharing a space, rabbits lying or sitting together means the rabbits are willing to live together in the same space.

If rabbits rolled on their side or back, they are relaxed as they wouldn’t be so calm if they were terrified of each other. Also, if the rabbits push their ears and nose forward with their feet firmly flat on the ground, they are interested in knowing more and interacting with each other.

Rabbits that are hostile towards each other won’t exchange grooming as it is crucial in the bonding.

Communicating with their kittens

Rabbits are usually perceived as being cold towards their kittens. However, this is not so as they keep their kittens safe before letting them live on their own from a young age. For a few days after birth, kittens remain blind and deaf and can receive no communication.

They are housed in the nest built by their mother during pregnancy. A dam usually feeds her kittens once every day, for not up to ten minutes, before leaving them alone. This food sustains the kitten for about 24 hours.

After building the nest, the dam leaves her kittens to prevent a predator from finding her kittens through her scent. The rabbits are weaned off milk at three weeks old into eating solids. The dam doesn’t have much business with them again at this stage.

Beyond communicating with themselves, rabbits also love to communicate with humans, especially if they love and want to bond with their owners. Below are the different ways they communicate : 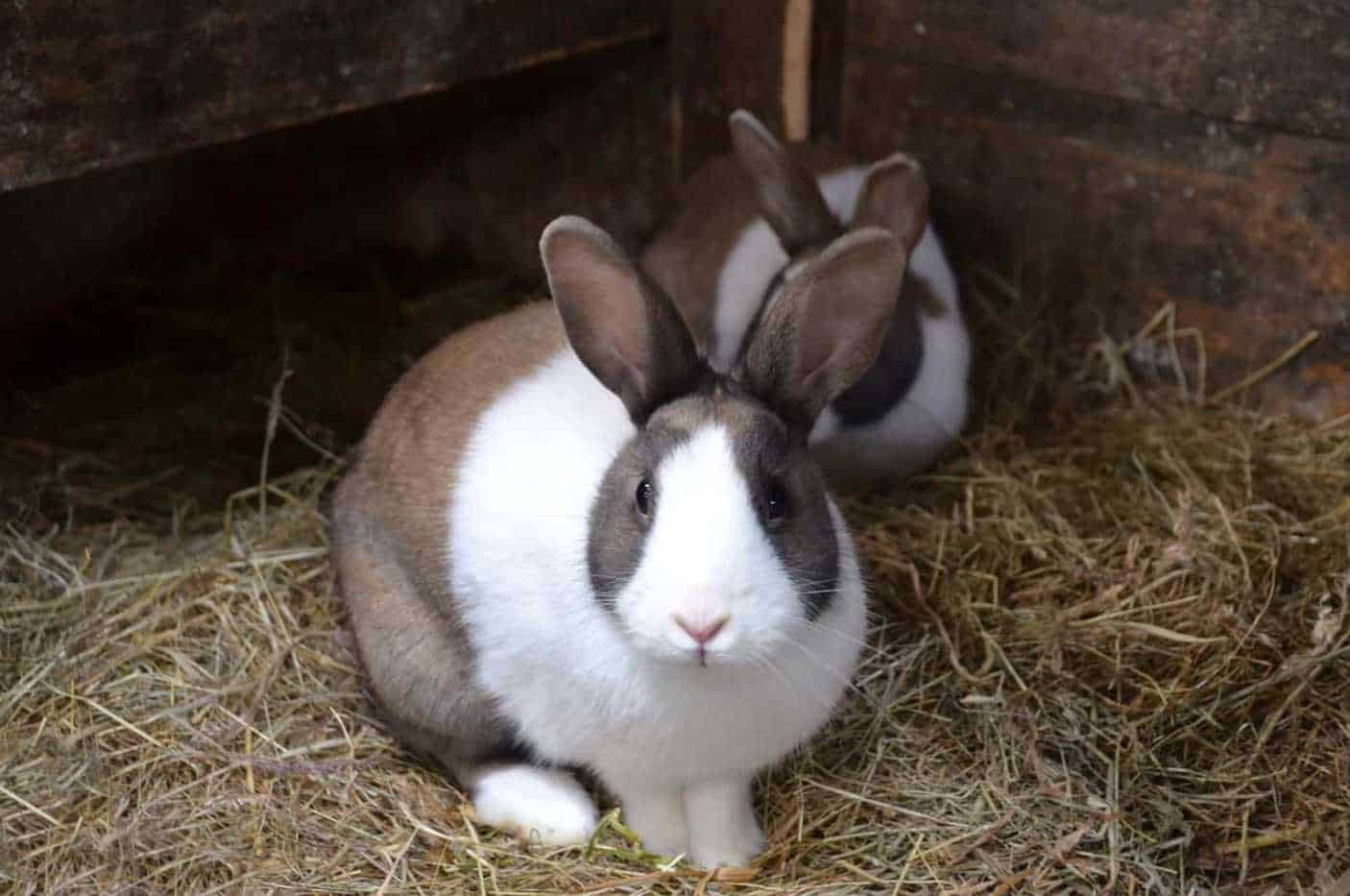 A rabbit might communicate its annoyance with a human through grunting. The rabbits’ owners often hear this. For instance, many rabbits love to be handled but don’t enjoy it because it makes them sensitive.

The rabbit might grunt or snort to communicate its discomfort when picked up or when their cages are being cleaned by their owners. It means the owner is encroaching on their territory and might destroy what they have made. As such,  clean their cages when they are out of sight.

A rabbit can communicate its discomfort and mild fear by whimpering. This whimper could indicate its fear of its hutch mate. It also whimpers when it doesn’t want to be handled and should be released. Sometimes, a rabbit may scream like a child, which means it’s terrified.

This does occur often and should not be taken with levity whenever it occurs. Also, a whimpering rabbit could be injured, so check for injury signs. 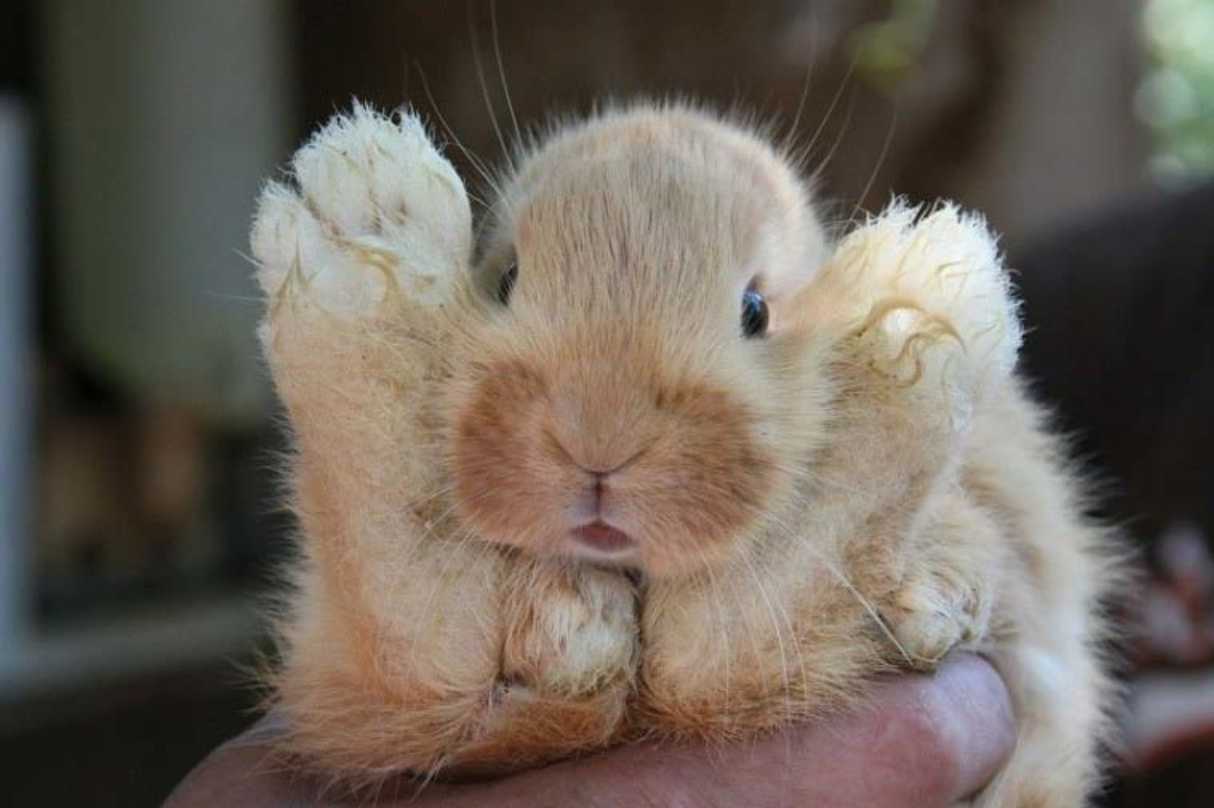 Rabbits communicate happiness and satisfaction through purring and clucking. They do this when their owner is petting them to show their contentment.

Also, if a rabbit clucks when eating, they enjoy the food or have been offered its favorite treat. A rabbit’s purr shouldn’t be misinterpreted for tooth grinding, which is painful.

A rabbit may nudge you with its nose or give very gentle nips. This is not a display of aggression; instead, it is a way of attracting one’s attention. If you ignore their nudge, a nip follows to grab your attention. Usually, this nip is just a tiny bite and harmless.

They may also nip to show that they are growing angry and territorial. If your bunny wants you to pet and groom it or if it’s hungry, it would place its head on the ground. A nudge could also mean they are attempting to get something, but you are in the way, so they need you to move. 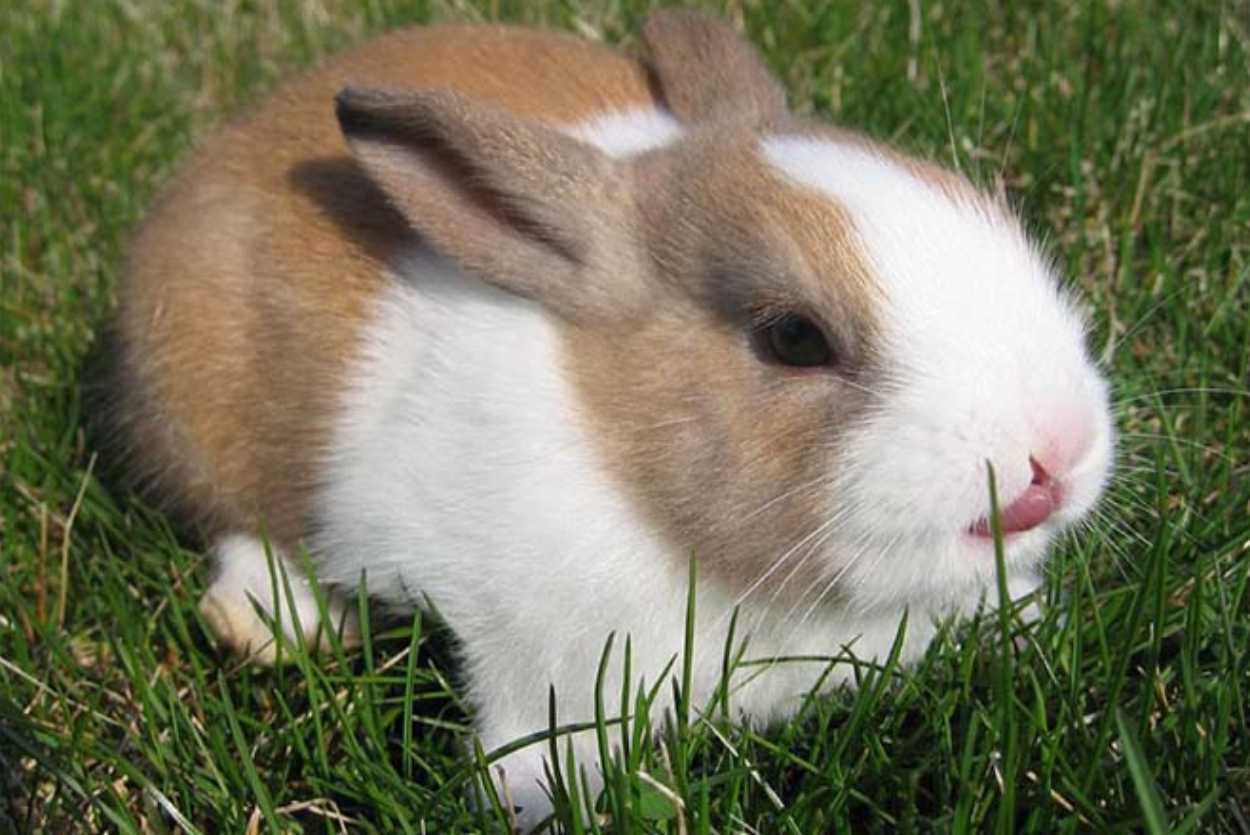 Rabbits often communicate with their ears, and you should pay close attention to them to avoid being clawed or bitten. When rabbits’ ears point sideways and move backward, grunting simultaneously, it’s a warning that you should stop what you are doing to them.

When its ears are attentive while facing backward, the rabbit is annoyed because you can’t decode its message. When it lowers its ears backward and makes them touch its spine, it’s ready to attack if you don’t move away.

Rabbits expressing joy and affection may binky, an acrobatic jump accompanied by a twist in the air. It also means they are playing. In addition, rabbits can beg by standing on their hind legs and touching you.

They may also stare into human’s eyes to beg for a treat. They may turn their back on you to express their anger at you. Some rabbits will refuse to look at you, pulling their ears over their eyes.

Rabbits have scent glands under their chin to mark their territories. Humans may not perceive the scents from the glands, but other rabbits would.

If a rabbit rubs its chin on its owner, it is simply staking its claim and marking the human as its own. It is similar to a cat rubbing itself on its owner’s leg.

This prevents the rabbits from upsetting and fighting each other and helps them bond with their owner and other humans.