4 Reasons Your Rabbits Jump Over Each Other

Often, you’ll notice your rabbits jumping over one another. For first-time pet owners, it may be an act that can confuse them about what they mean. If you want to find out what your rabbits wish to say by jumping over each other, continue reading this article for more information. 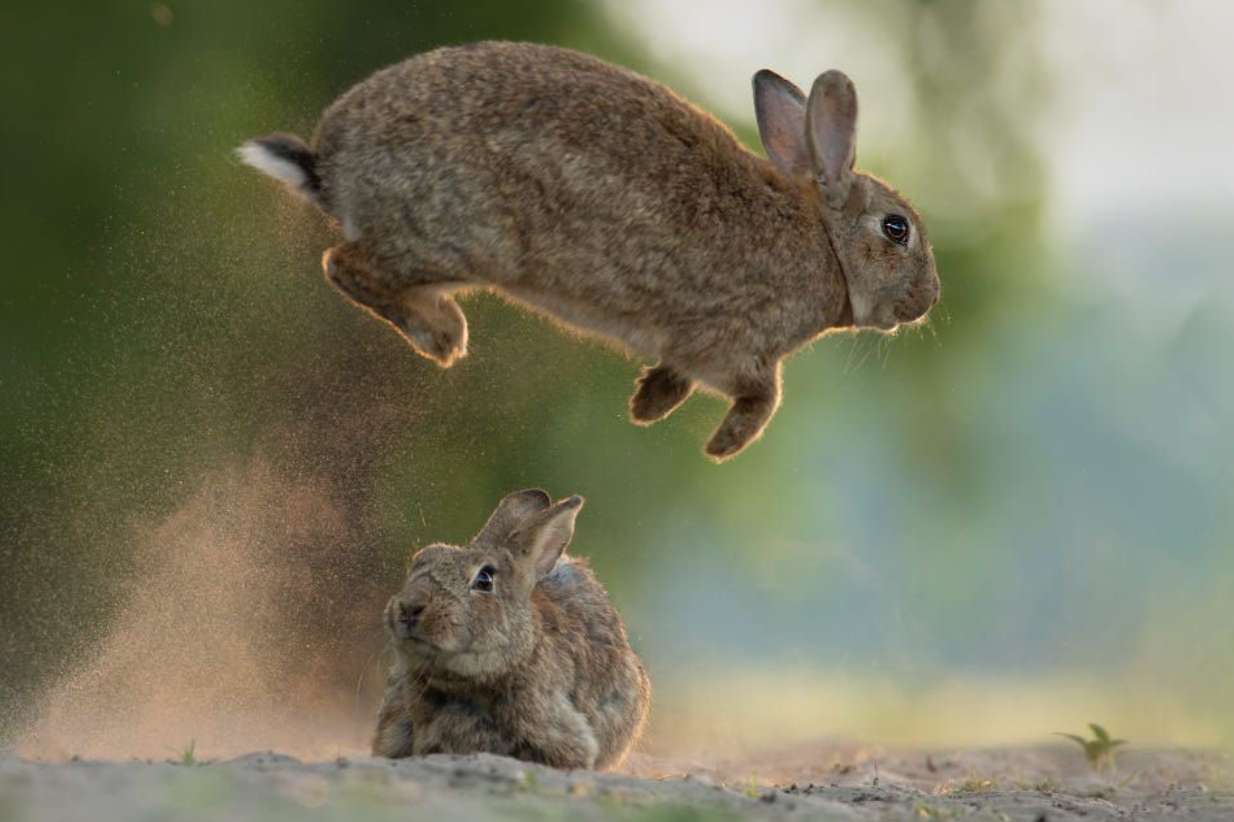 If you’re a first-time pet owner, you may be confused about why your rabbits keep jumping over each other. Let me tell you that it’s a natural thing that rabbits will do at least once in their lifetime. And the first reason why they may be doing it is that they want to assert dominance.

Naturally speaking, rabbits have their own ‘hierarchy,’ based on who is the strongest rabbit in the group. This usually occurs if there is a single female or male in the group and many rabbits of the opposite sex.

The group will then decide who is the strongest based on the highest and fastest jumper. This is why you will usually see your rabbits jumping over one another, especially in the first few weeks in which they are placed in the same area together.

To find out if your rabbits are trying to find their rank among the group, there are other signs in which you can be sure that this is the reason behind them jumping over each other.

When a rabbit wants to assert dominance over a group of rabbits, the first thing you’ll notice is that they will start being aggressive. At first, you’ll just hear small grunts from your rabbit.

Grunting can mean many things for rabbits, but usually, the main reason is anger. Some rabbits will thump their feet while others may lay on top of other rabbits. Do not wait for them to get too physical, like pushing before you separate the aggressive rabbit.

Suppose you notice your rabbit staring at the others for long periods. In that case, this is considered a sign that they are trying to assert dominance over them. But always observe them since this act can lead further to biting other rabbits to assert authority over them, which can be unsafe for your rabbits.

If one of your rabbits tries to bite others, take that rabbit and separate them from the group for some time. 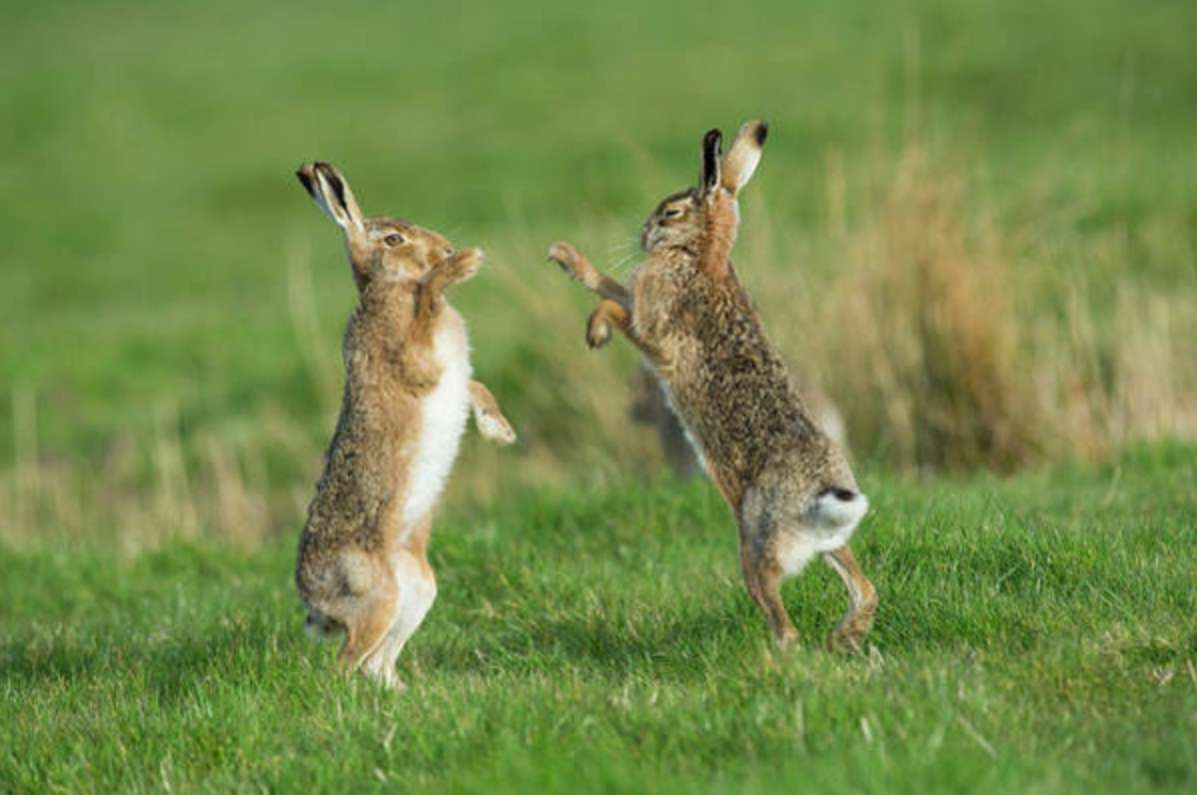 Just like us humans, rabbits can also have occasional fights. It’s pretty standard for them to have spats every now and then, but they should be small fights only. If it turns into an aggressive battle, it’s time to separate the two of them so that they won’t be able to hurt one another.

When put together, Rabbits will take their time bonding with one another. The time ranges from one week to two months, depending on each rabbit’s personality. You should give them some time every day to bond and get to know one another. Of course, fights will break out, so make sure to observe them when placed in a single space together.

There are a lot of factors that you should consider if you are planning to bond two or more rabbits. First is their breed or size. If you put a small breed and a large breed together, the large breed will be dominant, and fights will regularly occur.

Next to consider is an age since you wouldn’t want to bond few-year-old rabbits to a new kitten since it can cause problems with their different energy levels.

Lastly, one of the most important factors is that you should always consider your rabbits’ sex. They would definitely get along not just because they are all female or all male. Dominance will play a huge role with this, especially with unneutered rabbits. So make sure that all of your rabbits are neutered and consider all the factors involved to avoid fights.

If a fight does break out, do not fear. There are many ways to figure out if your rabbits are fighting and how to break them up every time. Some of the signs include jumping over one another, biting, clawing, and staring for a long time.

Get yourself a lengthy prop, a dustpan, or a broom, and safely separate the rabbits. Putting them far away from each other for some time can calm them both down. You may also check this video for more information. 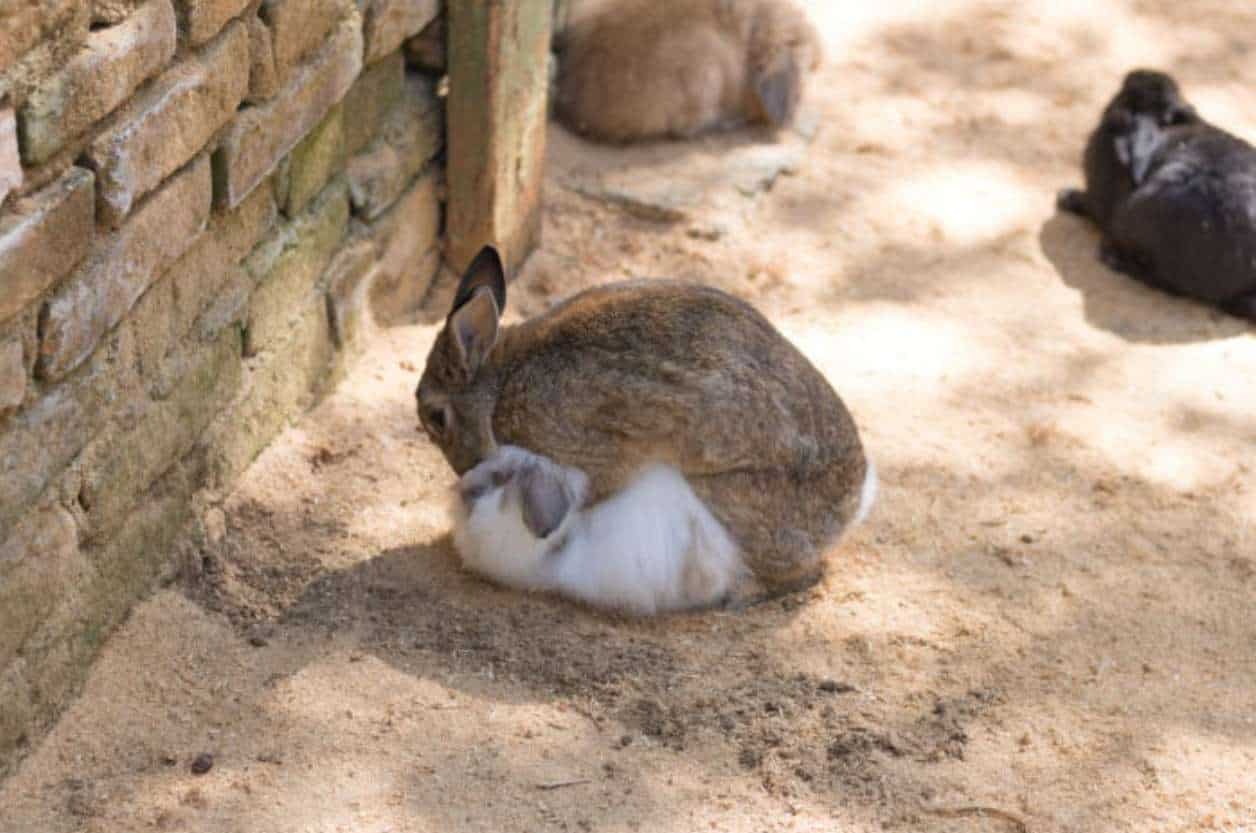 While you observe your rabbits jumping over one another, it may seem like a playful thing that they do at first. However, jumping over each other is one indication that your rabbits are calling to mate. Experts consider this act a mating ritual, especially for young rabbits who will mate for the first time.

Some rabbit owners may not be sure that this is the exact reason for their rabbits’ actions. Experts have listed down some other signs and indications to help pet owners distinguish if this act is really a mating ritual. 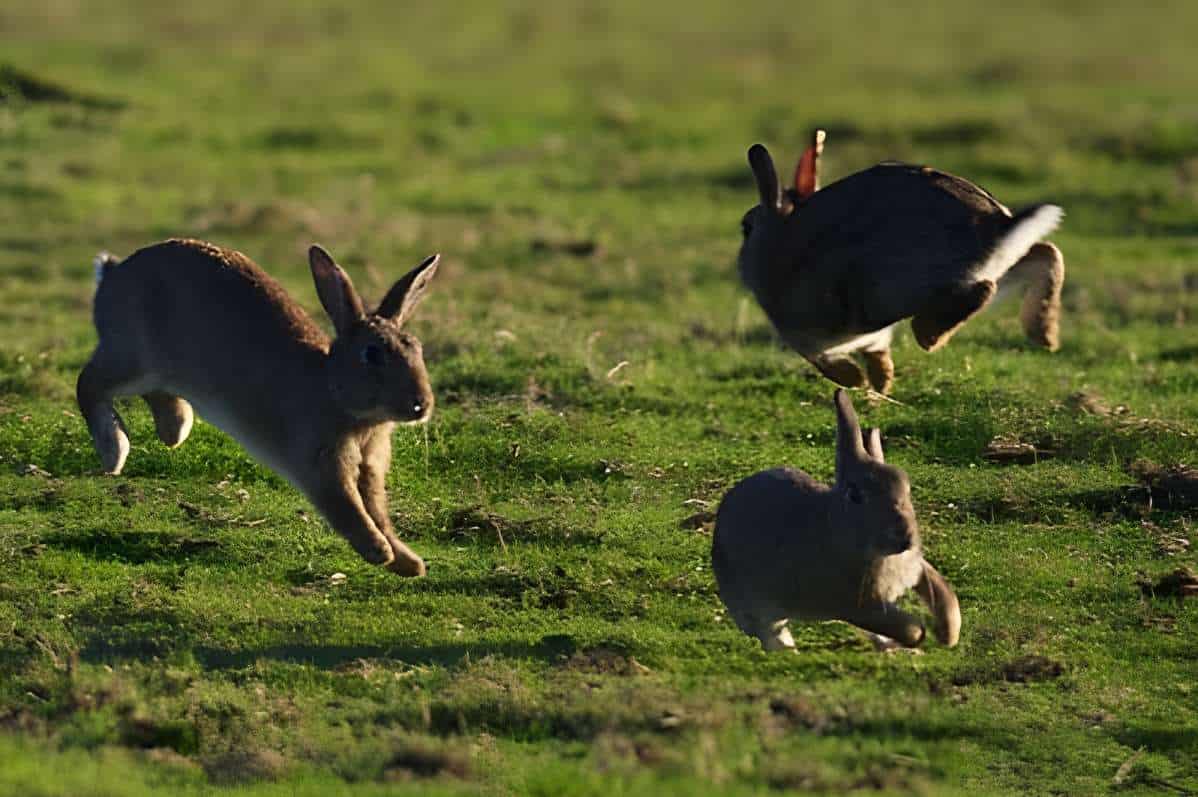 If you are new to taking care of rabbits, you should know that these furry animals love being active. Most of the time, they will only play, eat, and sleep, so they need a lot of activities to keep them healthy. Because of this, rabbits usually jump over one another to keep themselves fit.

Rabbits must get enough exercise and activity each day. If your rabbit is not active enough, it will quickly get fat and have many health problems. Jumping over each other is one of the simplest forms of activity that they can do to stay fit. This activity can help strengthen their muscles and keep them healthy for a long time.

When taking care of rabbits, you should have an ample space where they can roam around freely and do some activities and exercises. Once your rabbit gets comfortable with the room, you’ll notice them walking and playing around. If you have enough area, you can also invest in equipment for rabbits. 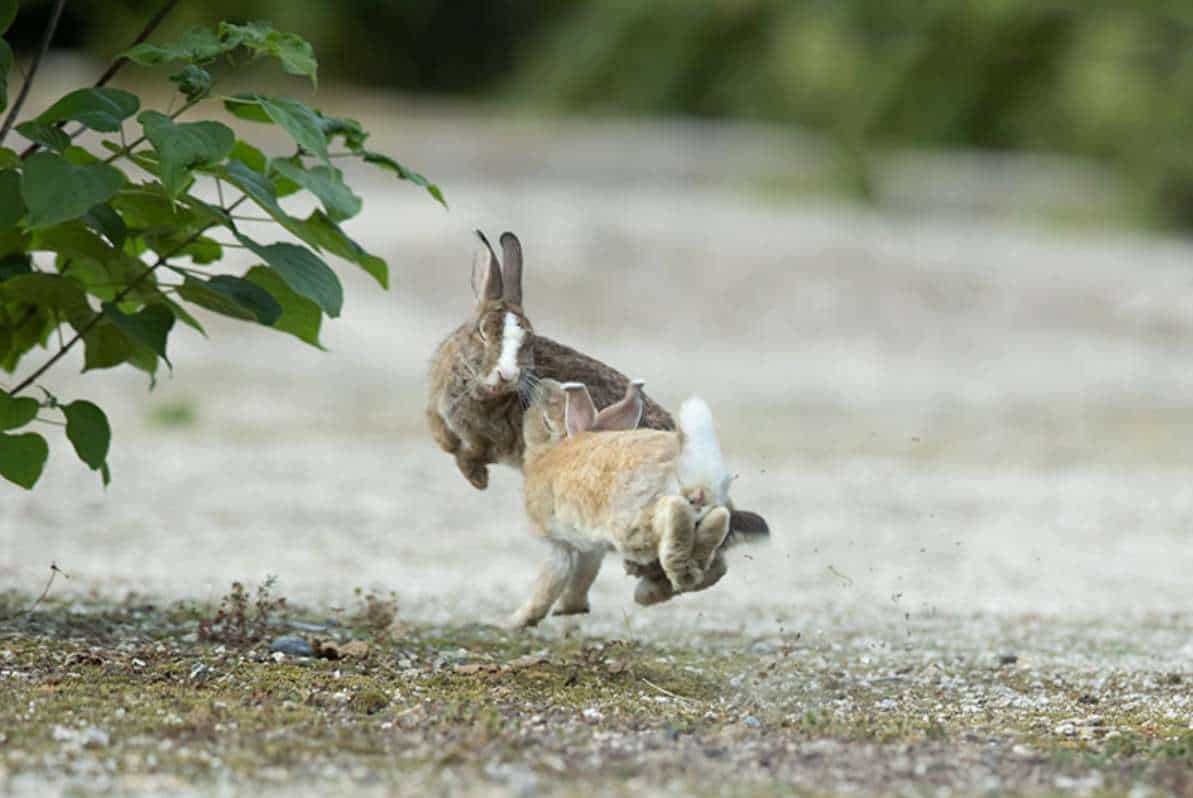 Now that we’ve listed down the most common reasons why rabbits jump over one another, there may be some additional questions left unanswered in your mind. For this, we have prepared a small section of this article to try and provide answers to your question. Check down below for more information on this.

Are there other reasons why they jump over one another?

How to know when to stop them from jumping over each other?

If your rabbits are simply jumping over one another in a non-harmful way, there is no need for you to stop them from doing this. However, if you notice them starting to behave aggressively and you feel like a fight is starting to brew, act on it as soon as possible.

You don’t have to wait for a rabbit to get hurt before separating the aggressive one from the group. Put them on time out all by themselves, and you can bring them back to the group once they’ve cooled down.

If you’re reading this now, you probably already know why your rabbits jump over each other. Whether it’s a positive or negative reason, just be ready for what you will do once they are done. Observe their reactions to know the valid reason for their actions, so you’ll know what to do.