Where Do Wild Rabbits Sleep?

Rabbits are one of the most adorable fuzzy animals – both domestic and wild. Their distinctive long ears, fluffy cheeks, and powerful hind legs make them one of the nation’s favorite animals!

Whether you’re in a rural area or a suburb, you’ve probably seen them hopping around. But have you seen wild rabbits doze off to sleep? This article will answer your most common question: Where do wild rabbits sleep?

Where do Wild Rabbits Sleep? 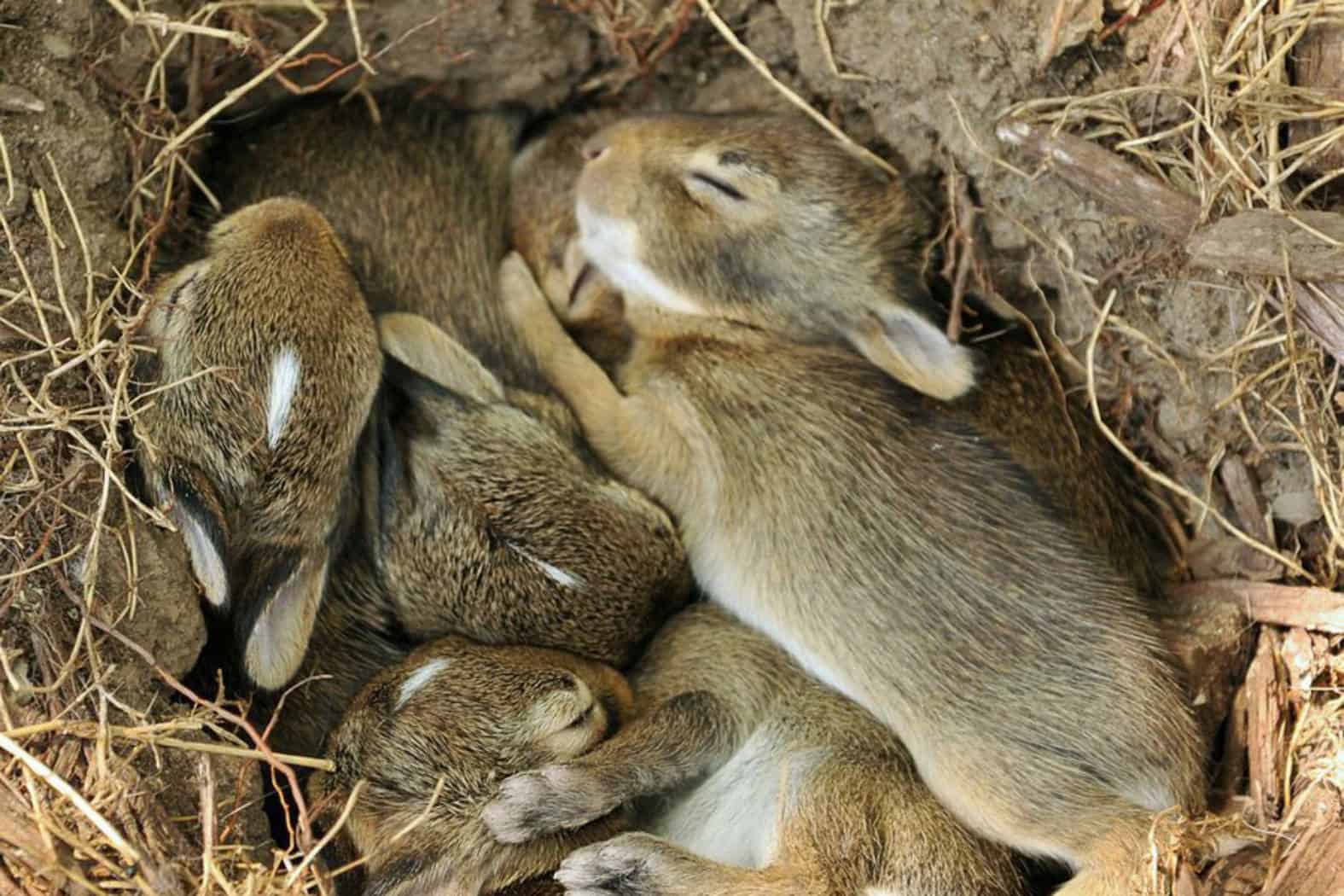 Like humans, wild rabbits have their own homes and bedrooms for a good night’s sleep!

Wild rabbits, excluding cottontails that sleep under thick shrubs, dig a network of tunnels or a system of caves to sleep. This network is called a warren.

A warren can be up to 10 feet deep. It has several sleeping areas with different exits and entrance holes.

Picture the warren as an apartment that houses several rooms inside. The bedroom is a nest where wild rabbits sleep inside the warren. It is considered their safe and secure place.

A nest often looks like patches of dead grass and moss, so rabbits feel cozy when lazing on it.

Often, wild rabbits share their warren with other rabbits. You might find 20 other bunnies in their home! As you see, most of them are very social creatures.

To mark their warrens and nests, they use urine and fecal pellets. They may also rub their bodies’ glands onto objects and walls to spread their scent all over their place.

Things To Do When You Find A Rabbit Nest 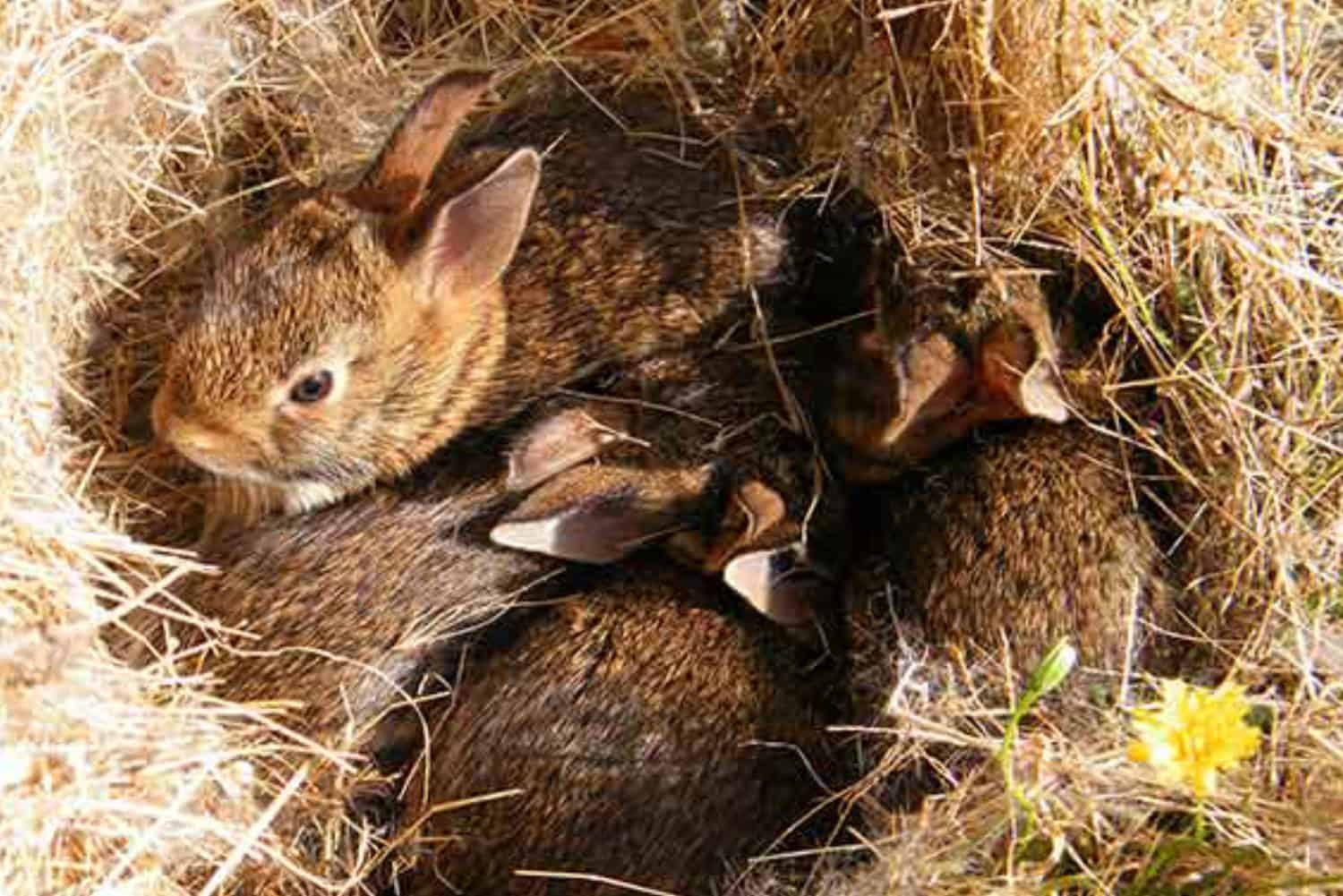 If you stumble upon a rabbit nest, the best thing to do is to stay away from it. Tell your family to be wary. Keep your pets away as well.

Never move the rabbit nest! Doing this may hurt and traumatize the kittens and separate them from their mother.

You may ask, “but what can I do to help baby rabbits?”. To help these tiny bunnies, we advise against moving or disturbing their nest. Instead, you can mark the area with flags or minor signs around the nest to alert other people not to go near.

Some well-meaning individuals may think that the baby rabbits are abandoned. However, it’s more likely that the mother rabbit is somewhere nearby and would go back when it’s time for her babies’ feeding and grooming.

Check this link for a few tips if you need to take care of newborn bunnies.

Do Wild Rabbits Leave Their Warrens? 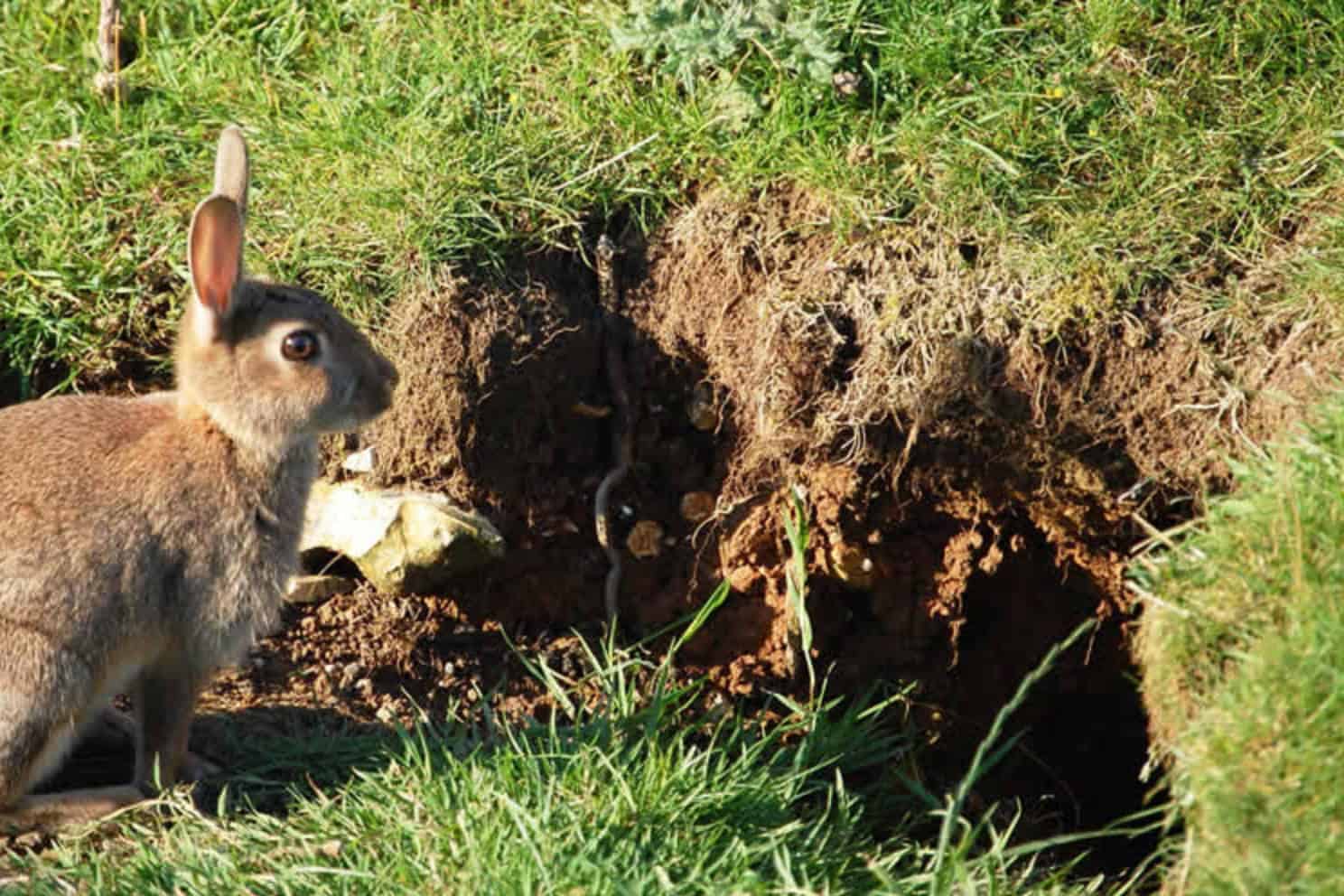 You might be wondering why wild rabbits have specific times of the day when they go outside. This is because of a strategic and intelligent reason. Their predators are primarily inactive during these hours.

While you think it might be safer for them to stay in their warrens away from predators, they need to feed themselves and look for potential mates. They do all these in the morning and evening. 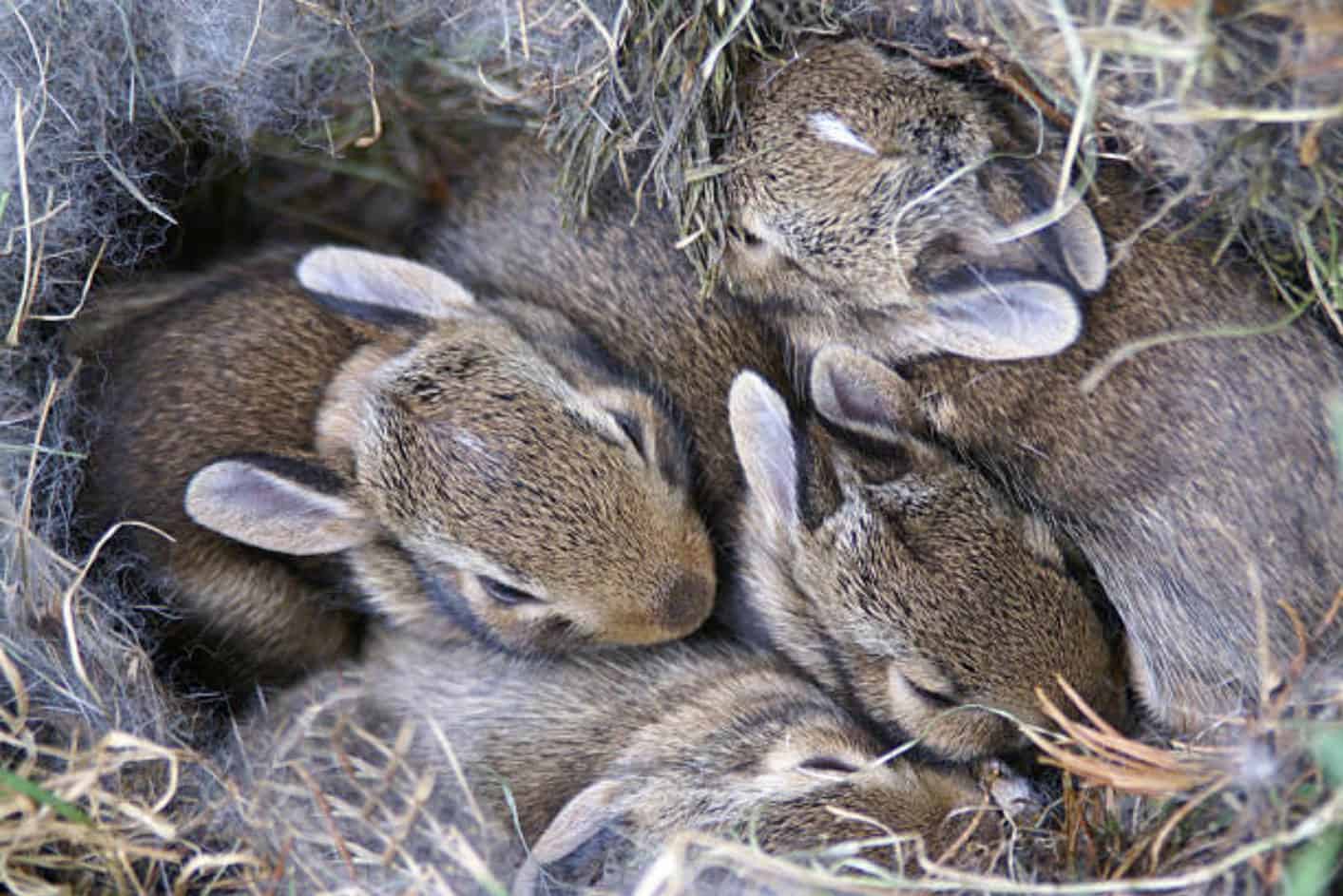 According to scientists, a rabbit’s sleep cycle has three stages: drowsy, slow-wave, and paradoxical sleep:

How do you know if a rabbit is asleep?

Look for these three signs to check if a rabbit is sleeping: 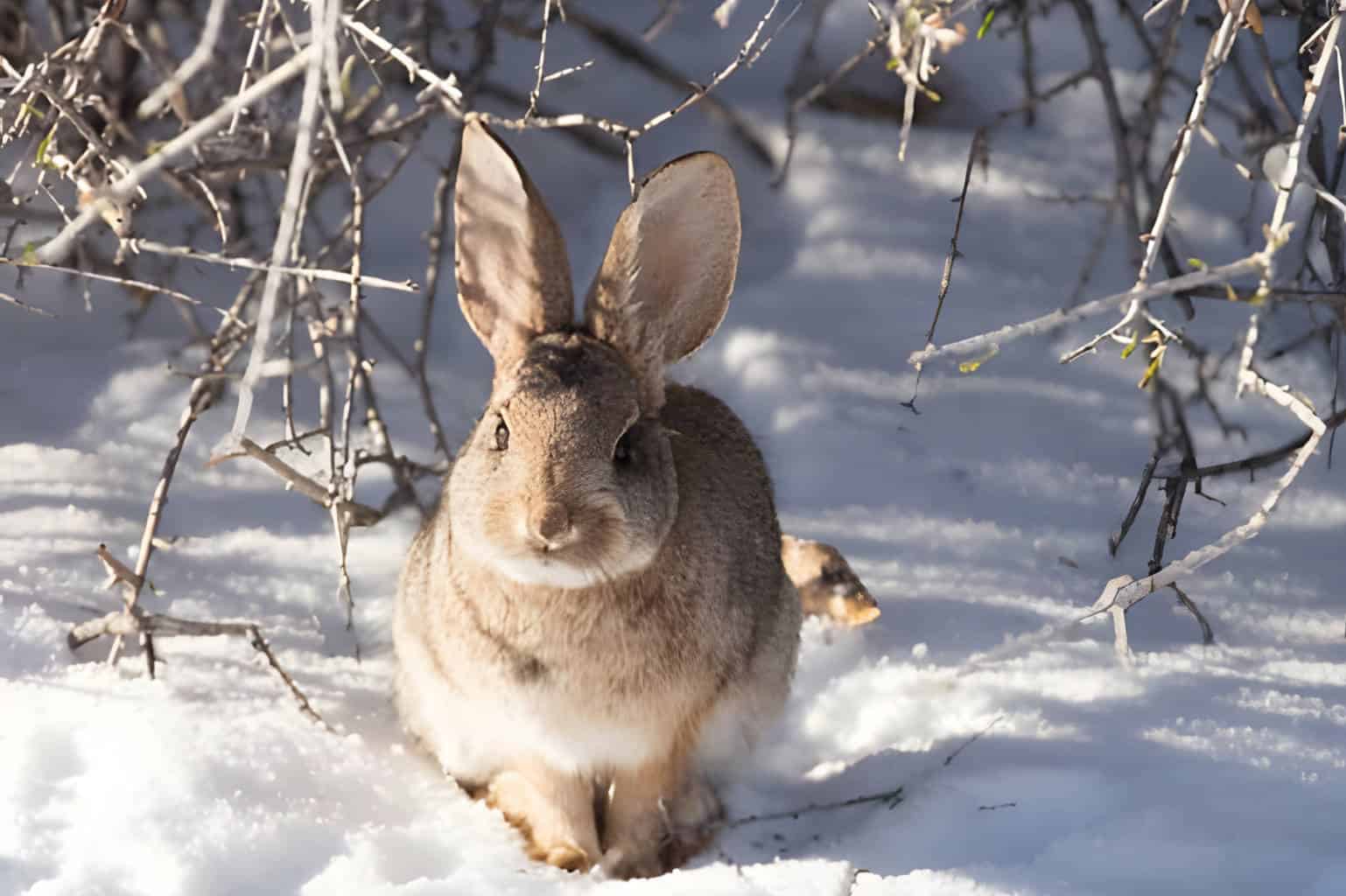 No. Rabbits do not hibernate; They are active throughout the year!

It’s a fact that wild rabbits thrive in lower temperatures. For this reason, they do not hibernate in the winter. You see lots of rabbits hopping around year-round.

Wild rabbits eat grass and other ground plants. During the winter season, snow covers most vegetation. So, what do rabbits eat all winter long?

What do Wild Rabbits Eat During The Winter Season?

Rabbits are known to seek food sources fervently. They actively look for spots to get food nearby. This is the reason why you might have seen wild rabbits in your backyard during the winter season.

Wild rabbits do not only eat plants. They live on moths, snails, and other insects too. Other than that, they look for wood-based sources of food. These include woody plants like birch, willow, oak trees, and even twigs or bark.

Did you know that rabbits eat their feces? Their poop is also called cecotropes, caecal pellets, night feces, or caecotrophs. Interestingly enough, they are a good source of Vitamin B, Vitamin K, fiber, and protein!

Where Do Wild Rabbits Stay in The Snow?

Because of the loss of vegetation by the snow, wild rabbits can be easily spotted by predators. Where do they stay in the snow?

Wild rabbits find shelter in thick bushes, trees, solid fences, or anything that can hide them from predators. Because they actively look for food, they need to stow away from other animals to keep them safe.

Let’s dive into some exciting things about these adorable animals! 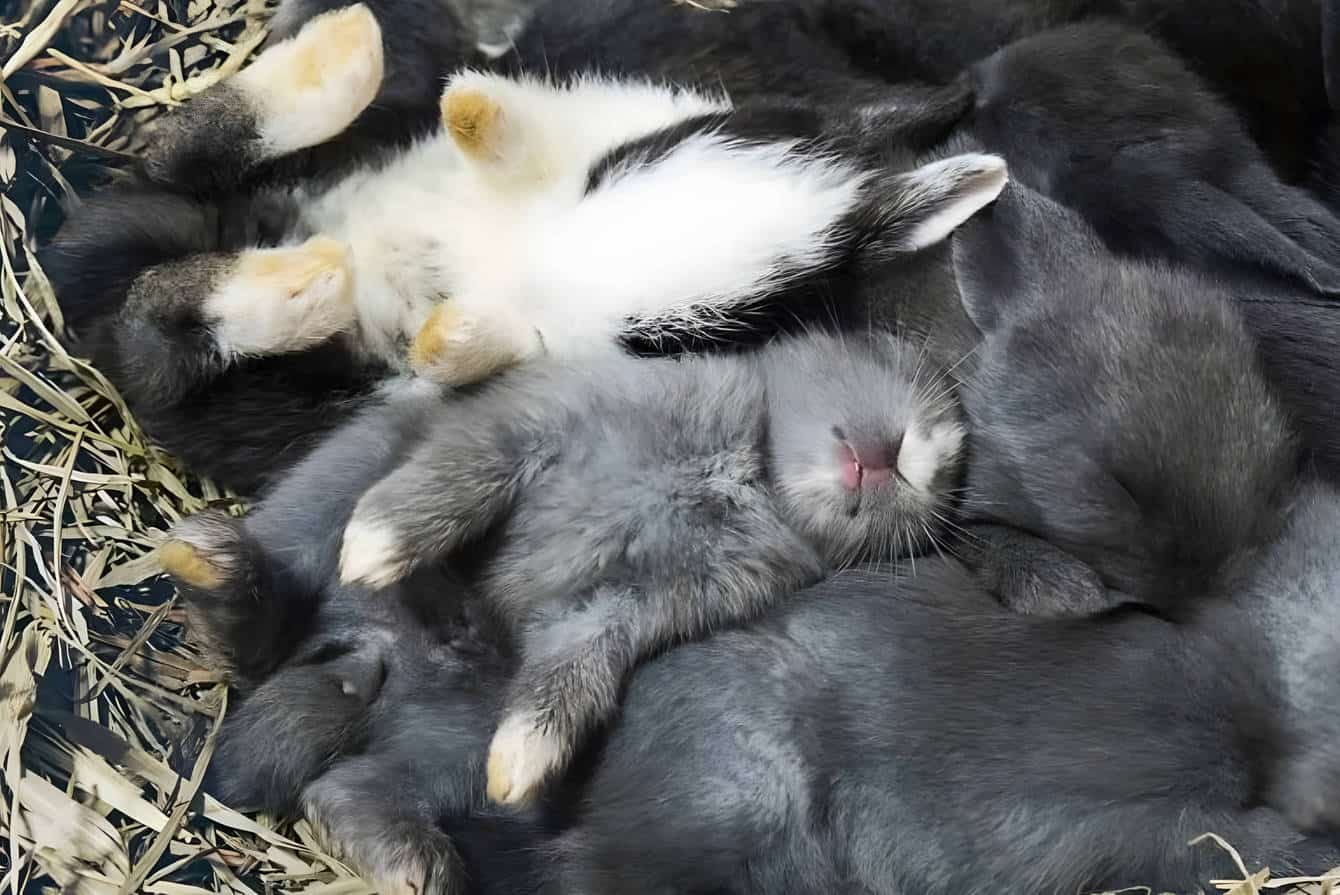 Because of this characteristic, wild rabbits can see what’s behind them, above them, and on their sides without having to tilt or turn their heads.

The only downside of this is they have a small blind spot in front of their faces.

Rabbits’ teeth grow continuously – they never stop growing throughout life! However, their teeth become easily worn out because of their diet with hard-to-chew foods.

3. Rabbits’ ears are not only for hearing.

Rabbits use their long ears to detect threats from even up to 2 miles away! Not only that, but their ears function to regulate their body temperatures as well.

4. Rabbits can jump far high up.

It’s a known fact that rabbits hop, but believe us when we say they can jump so high! Rabbits have the ability to jump over great heights.

They can reach up to 3 feet above the ground with a breathtaking distance of 10 feet long!

5. Rabbits can not vomit.

A rabbit’s digestive system is physically not capable of vomiting. Like cats and dogs, other animals can throw up swallowed fur by vomiting. Rabbits can not do that.

Instead, they eat plenty of fiber-rich food to push the hairball down their digestive tract.

7. Rabbits twist in mid-air when they are happy.

When rabbits get happy, they hop, twist, and wiggle their ears in mid-air. This gesture is called a “binky.” You’re lucky if you get to witness that cute joyful sight!

While most rabbits do a binky when they are ecstatic, a half binky may be a sign of ear infection, stroke, trauma, or a brain tumor.

Where do wild rabbits sleep? Just like humans, wild rabbits have their own place to sleep. Cottontails sleep under thick bushes and shrubs, while other species of wild rabbits make themselves their bedroom and nest where they doze off to dreamland.

If you happen to find a rabbit nest on your backyard or lawn, it’s best to stay away from it as you might harm the baby rabbits living nearby. Keep wild rabbits safe by not disrupting their homes!