How To Deal with Rabbit Papillomavirus?

The virus can be transmitted through the bite of an infected tick or other insects. These infected insects include continental rabbit ticks, reduviid bugs, and mosquitoes.

The rabbit papillomavirus manifests itself through red lesions or wart-like skin growths located primarily on the rabbit’s head.

How are these viruses transmitted? What are the signs and symptoms? How can it be preventive? Is it lethal? Is the virus harmful to humans? We will answer all these questions about the rabbit papillomavirus in this article. 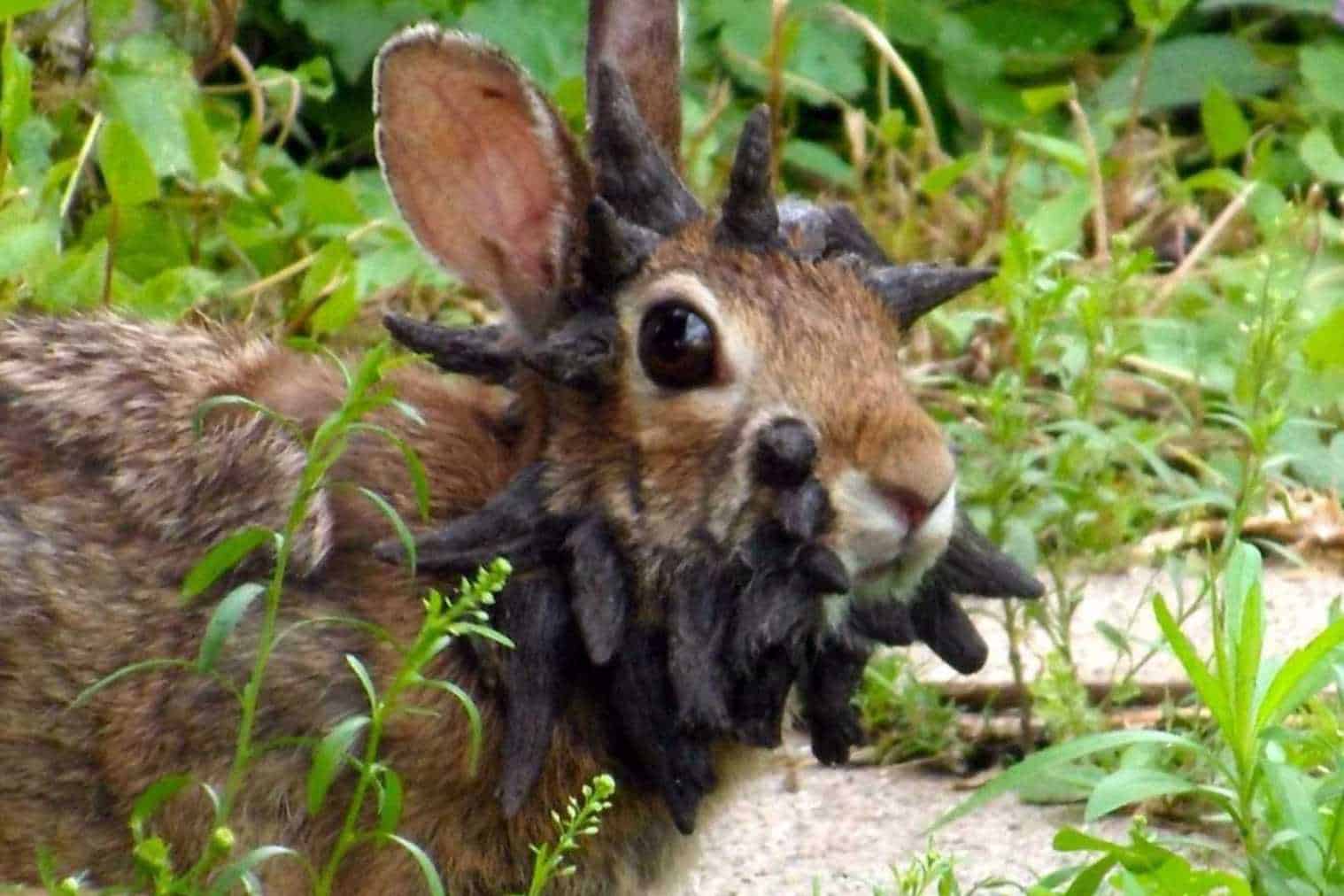 Papillomavirus is a member of the family Papillomaviridae. They are present in various birds, animals, and mammals, including humans.

These viruses can create warts or benign tumors that can progress to malignancy, particularly when they are found in the human genital tract or uterine cervix. The most typical indication of papillomavirus infection is warts on the skin.

The most prevalent sexually transmitted infection is caused by the human papillomavirus (HPV). The first sign of HPV infection in a human is genital warts.

These little lumps or clusters of bumps form around the outer parts of the genital area. These bumps can be minor or huge, elevated or flat, or cauliflower-shaped. In humans, genital and venereal warts are apparent, unpleasant, or irritating.

HPV can be transferred sexually with someone infected. Additionally, it spreads by close skin-to-skin contact during intercourse. According to the study, approximately 10% of the adult population in developed countries has genital papilloma infections.

Numerous HPVs have been implicated in developing various precancerous lesions and malignant tumors, most notably cervical malignancies in women.

Certain strains of human papillomavirus can result in significant health concerns such as cancer. However, vaccines exist that can prevent these health concerns from occurring.

Tumors frequently spontaneously vanish as the animal gradually acquires immunity to them. Some of these warts may require surgical removal if they become inflammatory, infectious, or do not regress over time.

As with humans, these tumors may be a symptom of more severe diseases, such as cancer. Dogs, cats, cattle such as horses and cows, rabbits, and other animals such as birds, snakes, turtles, and fish are also susceptible to BPV infection.

Although the study discovered a diverse array of HPV sequences, there was insufficient evidence for interspecies transmission.

Papillomaviruses are highly resistant to unfavorable environments. They are the type that can persist for extended periods outside of an animal’s surroundings.

Direct contact with an infected pet or environment, such as food, contaminated food containers, or beds, transmits the infection. Cuts and abrasions, tick bites, or bug bites allow the virus to enter the body.

Cottontail rabbit papillomavirus, also known as Shope papillomavirus. It is a virus that causes papillomas, more frequently referred to as warts, on rabbits’ hairless or poorly haired skin.

Sixty-six percent to eighty percent of rabbits infected with CRPV may become cancerous after a few months. Mosquitoes and ticks are the vectors of infection for rabbits.

The Cottontail rabbit papillomavirus was discovered by Shope and Hurst in 1933 while trying to figure out what caused wart-like tumors on Eastern Cottontail rabbits in the Midwest of the United States.

The virus was found to be spreadable. People thought rabbit papillomatosis was harmless until cotton rabbits started getting it, so the virus was named after them.

However, there have been spontaneous outbreaks of papillomatosis, which shows that the disease is more pertinent. Soon after the virus was found, it was found to cause malignancies that looked like cancerous tumors.

There are two different forms of papillomavirus in rabbits: cottontail rabbit papillomavirus (CRPV) and oral papillomavirus. While these illnesses are mostly harmless and will resolve independently, there are instances where intervention is necessary.

Eyelids and ears are the most common sites of papillomas or tumors caused by HPV infections. It can also appear on the rabbit’s face, head, neck, and back. Arthropod vectors like continental rabbit ticks, reduviid bugs, and mosquitoes are carriers and spreaders of the virus.

This virus is not to be confused with the rabbit oral papillomavirus. Oral papillomavirus forms papillomas of the tongue and oral cavity in domestic rabbits. CRPV forms lesions that resolve immune-mediated resolution and vanish after months.

These lesions may also develop into squamous cell carcinoma, which frequently metastasizes to axillary lymph nodes. Cottontail rabbits have a threefold reduced incidence of developing cancer due to viral infection than domestic rabbits.

Signs and Symptoms of CRPV 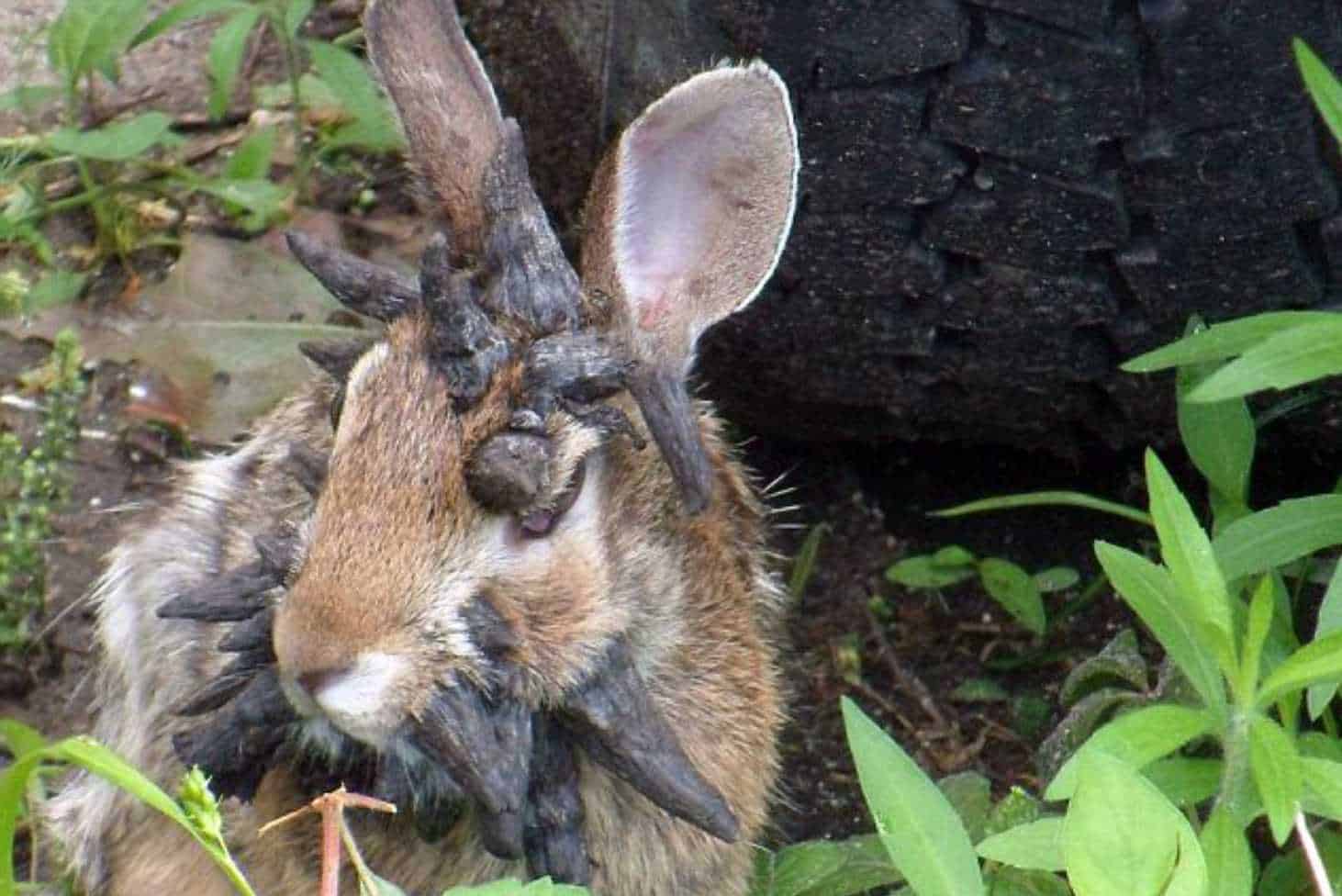 The neck and shoulders are common to find lesions in wild cottontail rabbits. These warts can be found on rabbits’ ears and eyelids without hair. 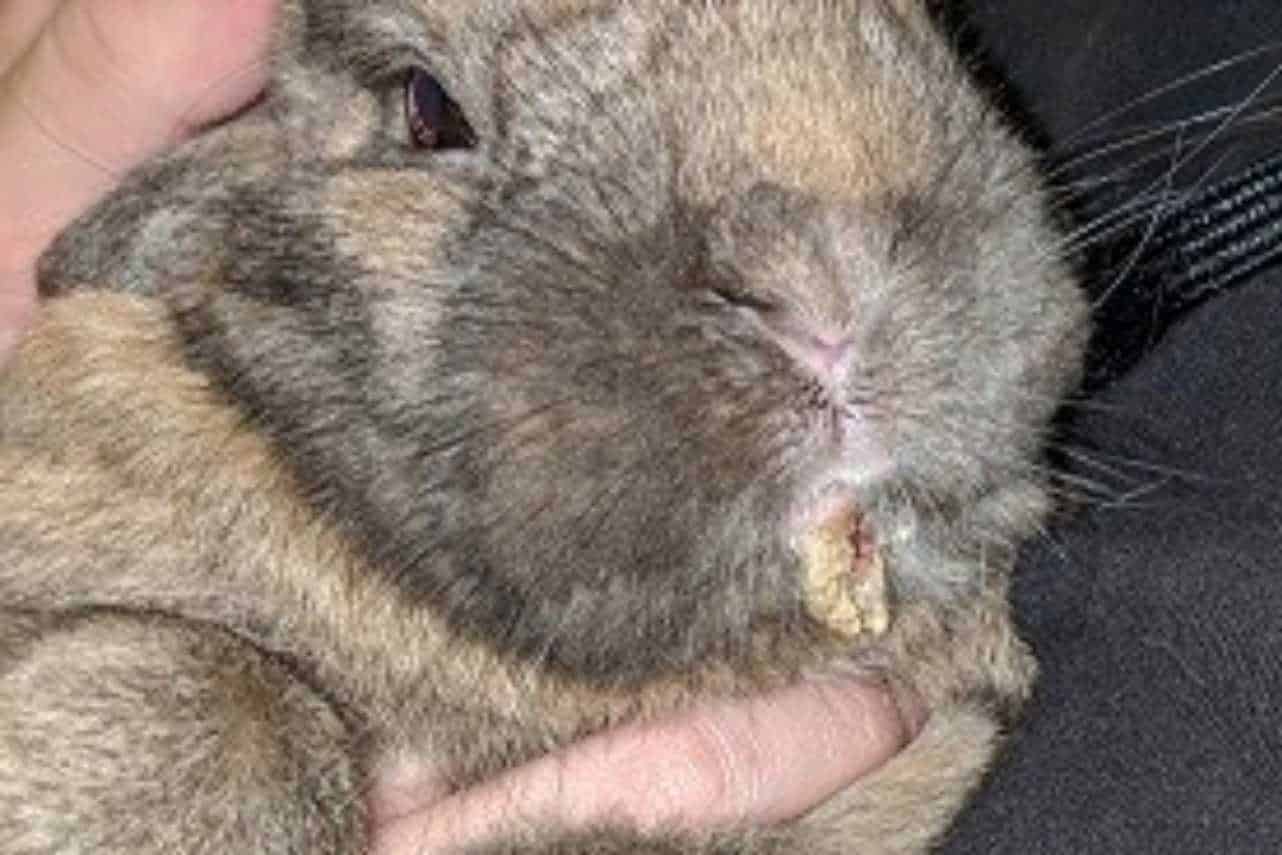 Oral papilloma virus in rabbits is a papovavirus. It has nothing to do with rabbit papillomaviruses. Oral papillomavirus infection is characterized by a growth of tiny, white lesions on the bottom of the tongue and in the oral cavity.

How to treat rabbit papillomavirus? 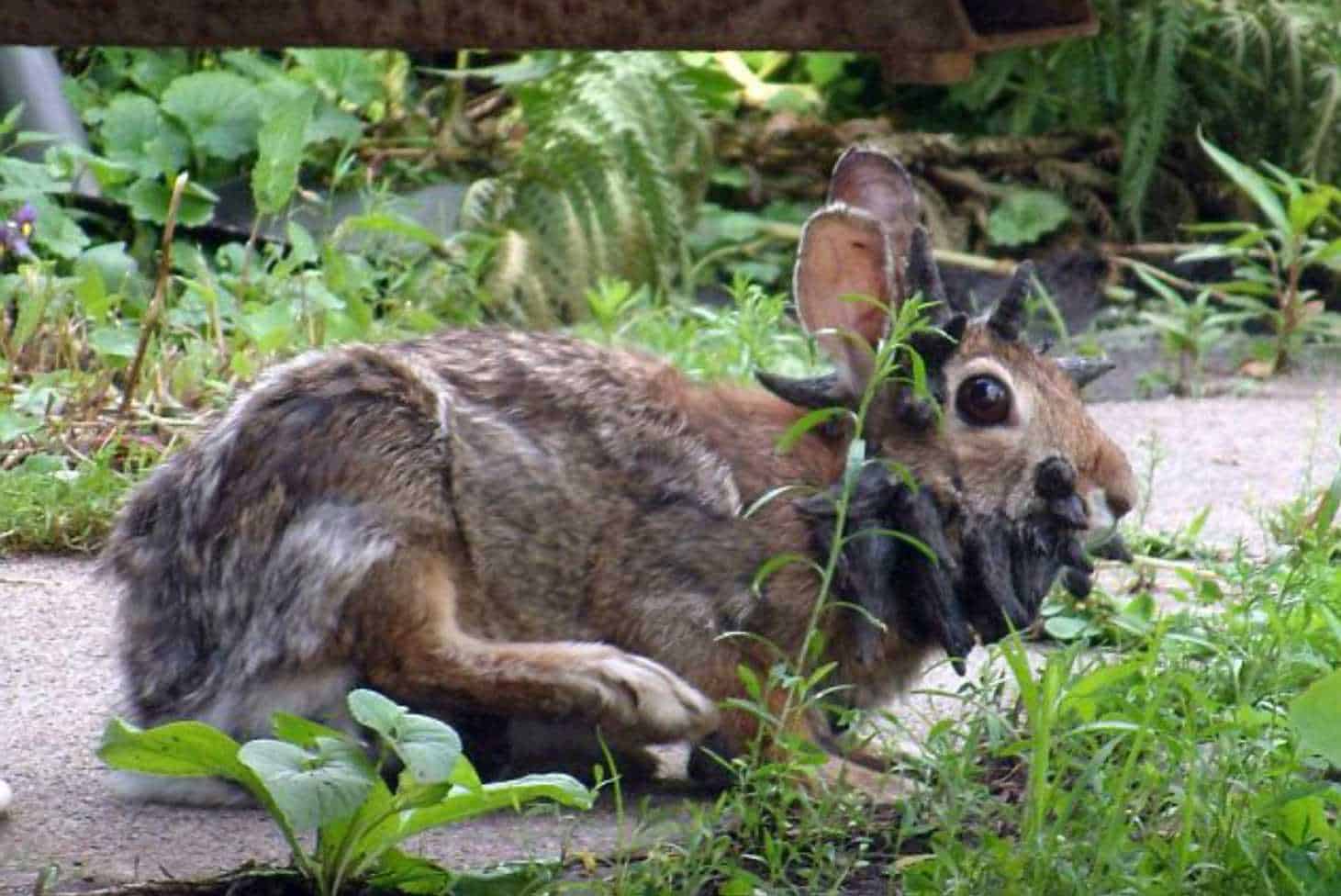 Treatment is typically not recommended in either case of CRPV or oral papillomatosis, as the majority of growths will disappear on their own over time. Certain circumstances may necessitate the removal of tumors or nodules.

Combining antiviral therapy with DNA vaccines has resulted in the cure of large established CRPV-induced rabbit papillomas and reduced the recurrence rate. Such a method may be beneficial in the treatment of chronic HPV infection.

These tumors typically disappear on their own. However, if malignancy is suspected or if cancer prevents your rabbit from living a healthy life, removing the tumor through surgery is necessary.

If tumors are thought to be malignant, additional tests can be conducted to determine the extent of cancer’s dissemination. Cancer has the tendency to escalate to the organs and lymph nodes and if left untreated, to the kidneys and liver.

Around 25% of tumors caused by CRPV can progress to squamous cell carcinoma. Surgical removal is frequently indicated, but only if the tumor is completely removed; otherwise, it may recur.

Tumors can be removed surgically through electrodesiccation, laser, or liquid nitrogen. It is critical to remove all damaged tissue altogether, as tumors can return if they are not entirely eliminated. Anesthesia may be used if necessary.

Mouth and tongue nodules associated with papillomatosis typically disappear within a few weeks and cause your little rabbit discomfort. Naturally, no treatment or removal is required.

Nodules that are larger in size may pose complications during dental work. Surgical excision may be necessary for certain circumstances, such as when the nodules interfere with your rabbit’s health or eating habits.

How long does papillomavirus stay on the rabbit’s body? 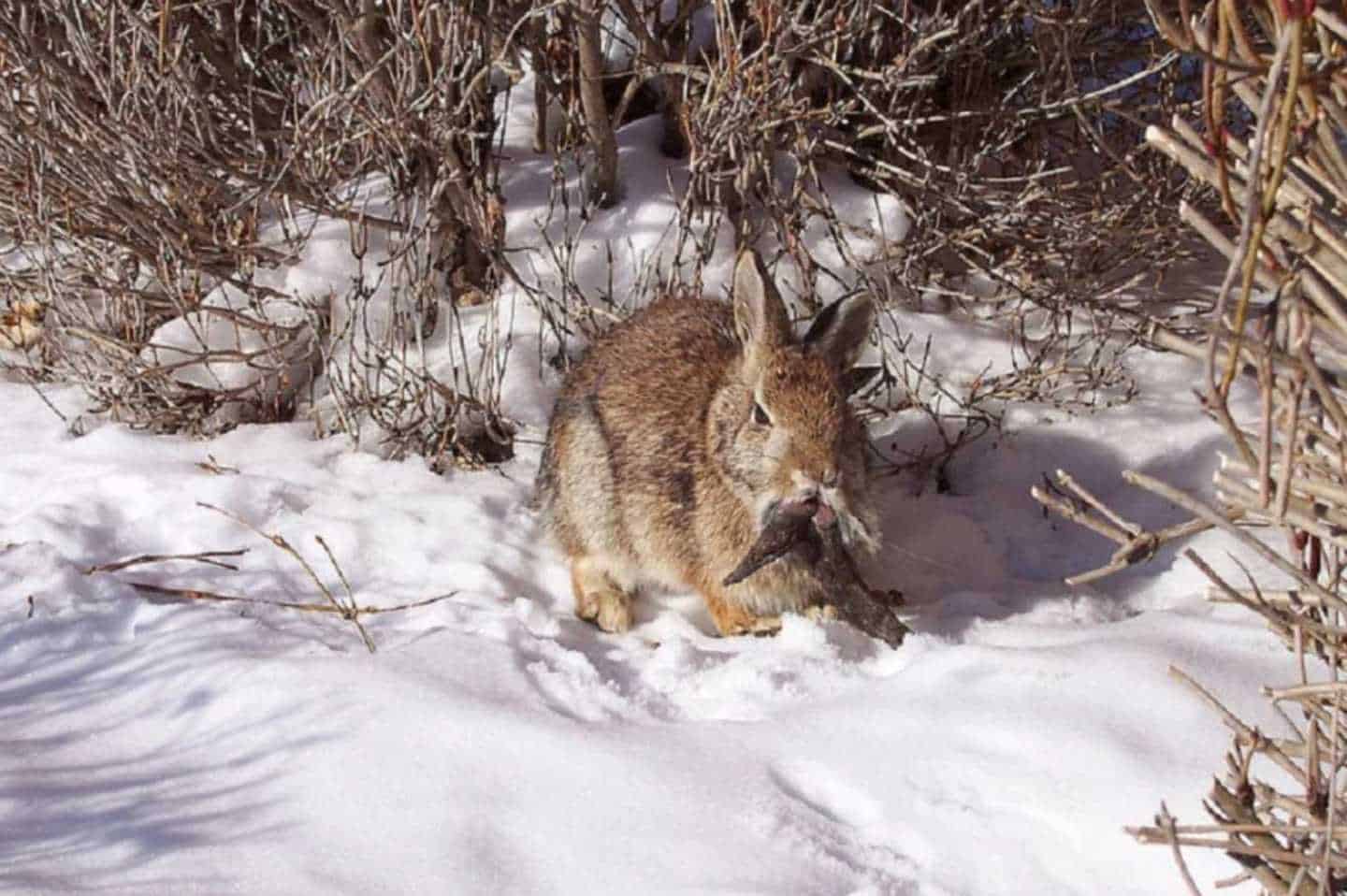 This may include cleaning and monitoring an incision and further veterinary appointments to check for additional growths. Your veterinarian will prescribe at-home procedures that are necessary.

Because the infection can be transmitted from rabbit to rabbit, it is critical to thoroughly clean your affected rabbit’s living space and surroundings.

The tumors may necessitate separate housing for pet rabbits until they are entirely eliminated. Observe the rabbit for any sign of pain or discomfort. Tick, flea, or insect repellent can help you from contracting the virus.

How to prevent your rabbits from getting CRPV?

The cottontail papillomavirus is a viral infection that causes malignant tumors to form on rabbits’ heads. The virus is found in both wild and farmed rabbits.

These lesions can be present across the animal’s upper half, including the neck and shoulders, but are most frequently found on the eyelids, ears, and other head parts. Surgery is often recommended to remove the tumors, as the nodules may develop into malignant tumors.