When do Rabbits Get into Heat?

Other than their floppy ear, bucked teeth, and high jumps, there is another thing rabbits are often associated with. It’s their frequently mating and humping habits.

This article will dive more in-depth into their sexual anatomy and answer the question: When do rabbits get into heat?

Heat or getting on heat (also known as estrous cycle) is the umbrella term often associated with when animals are ready and receptive to mating and breeding. This mostly happens after their ovulation period and often results in and ends with pregnancy.

An intrinsic instinct keeps them multiplying and far away from extinction. Domestic animals like cats and dogs often get into heat around two to three times a year, depending on their age, breed, and size.

The estrous cycle changes reproductive hormones, most common in mammalian species. To differentiate from menstruation, being in heat is a process that mostly starts with hormones that affect the pituitary gland and sexual drive. Unlike menstruation cycles, getting into heat will trigger the animal’s need to breed.

Most of the time, it’s very uncomfortable with the animal. They will whine or hump objects or other animals that are not the same species. Neutering is an excellent way to keep them comfortable and keep them from getting in heat.

Do Rabbits Get in Heat? 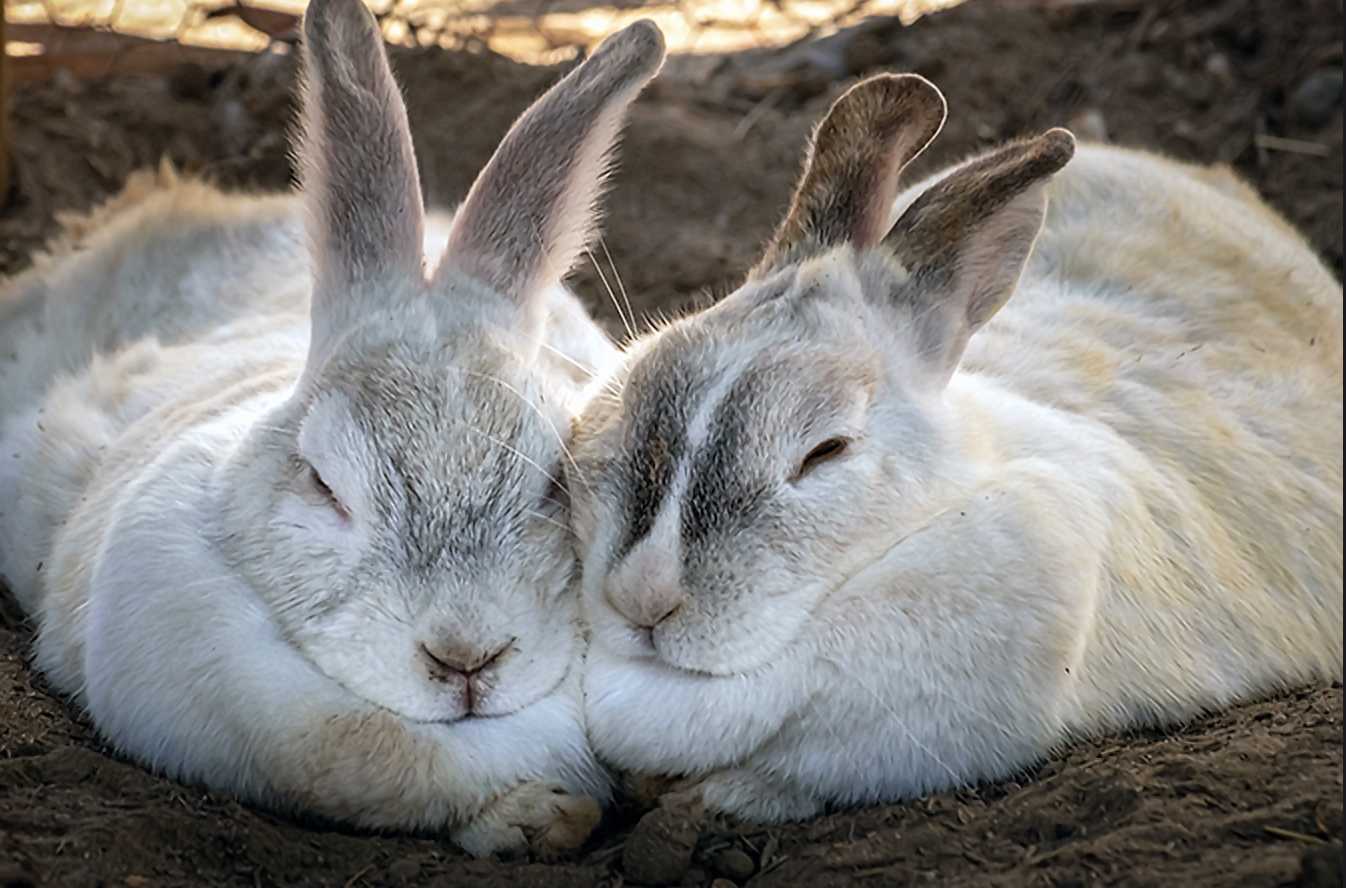 Technically, rabbits are always in heat. They do not follow the typical estrous cycle of other mammalian domestic pets. As they reach sexual maturity, rabbits are most capable and will try to mate and breed with each other.

However, there are influxes during the period the male and female rabbits are more receptive to sexual intercourse or mating, which we will get into more in-depth in the following parts of this article.

The constant sexual receptiveness of rabbits is due to their status in the animal kingdom. As prey, rabbits are pitted against much more robust and faster animals in the wild such as lions and hawks. To combat this, rabbits are designed to reproduce as much as possible.

Do Rabbits Have Periods?

Rabbits do not get periods. Unlike humans and other domestic mammalian pets, rabbits do not need periods to get rid of unfertilized eggs. They also do not go into ovulation to mate. Rabbits are triggered to ovulate when the mating starts and not the other way around.

When do Rabbits Get into Heat? 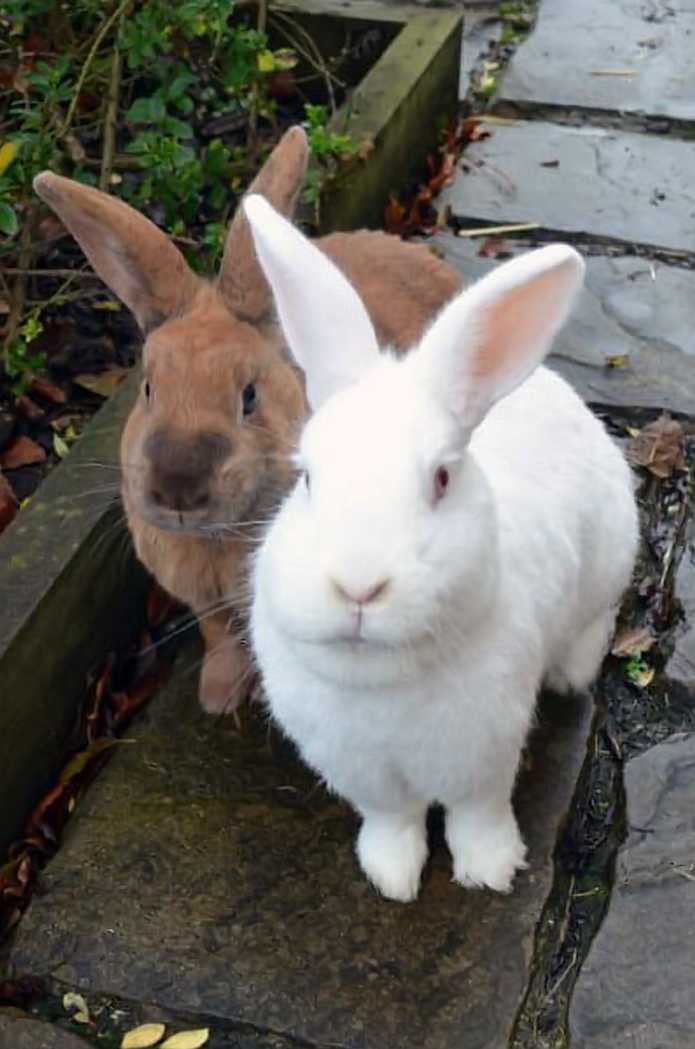 Depending on the breed, a rabbit can take four to eight months to reach sexual maturity.

Although most standard domestic rabbits reach their sexual maturity at around four months old, if you have different sexes of rabbits and do not want rapid overpopulation, consider neutering at about three months old.

Larger rabbit breeds such as angora and Flemish giants have a longer time before their sexual maturity due to their massive sizes. They also have more challenging time breeding and multiplying compared to smaller breeds.

Besides their sexual maturity, rabbits might get into their anestrous phase or when they are not receptive to mating when they are pregnant or experiencing phantom pregnancy, which is pretty standard with rabbits.

Most of the time, bucks will not try to mate with female rabbits, especially in the wild, where they are free to search for a more receptive mate. However, male rabbits in hutches or enclosed places might try to hump and mate with pregnant rabbits.

After the gestation period, the doe is technically in heat or receptive to mating again. In fact, female rabbits can breed after twenty-four hours of birthing. However, it’s not recommended as rapid pregnancy might cause many reproductive health risks to the rabbit.

In summary, rabbits get in heat as they reach their sexual maturity and will have a break within their gestation period.

How Long Rabbits Get into Heat? 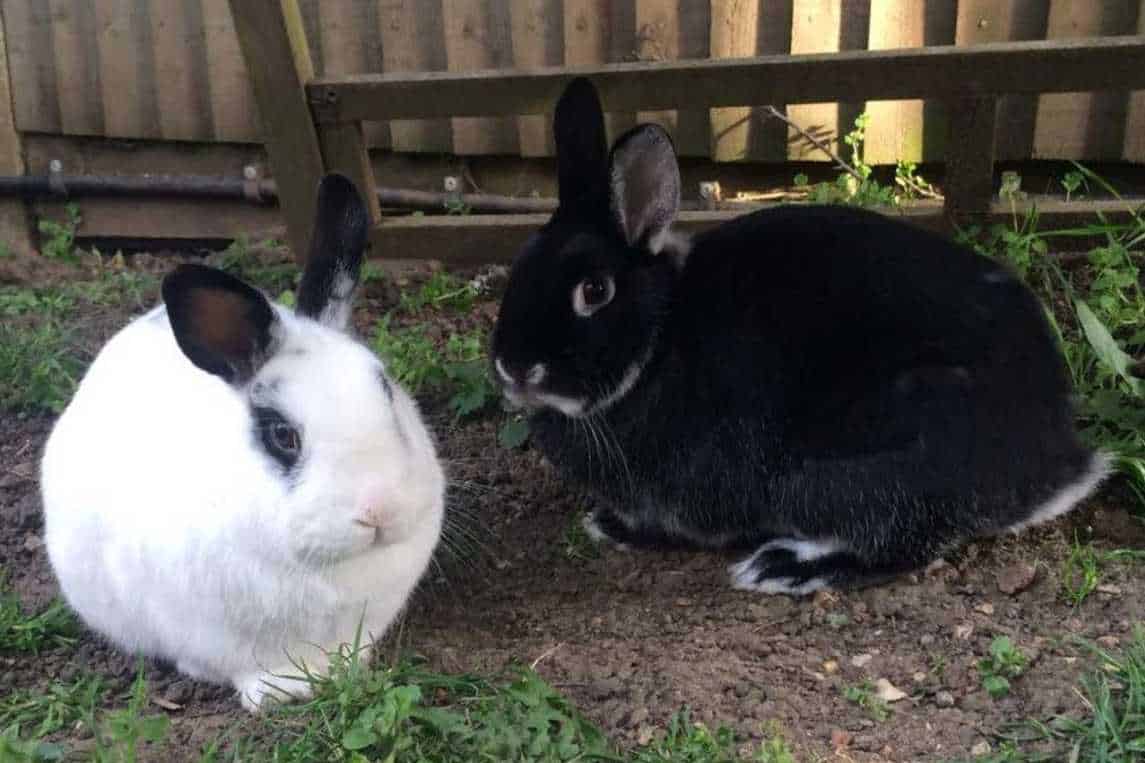 Depending on the breed, rabbits get in the heat after their sexual maturity at around four months old. They are technically in heat throughout their life as rabbits do not have a menopause period. However, their heat cycle does have influxes throughout the month.

Most of the time, the female rabbits will be in the prime mating receptiveness for one to two weeks and fertile for the next two to three weeks. With that said, rabbits are receptive throughout their life with just varying receptiveness. 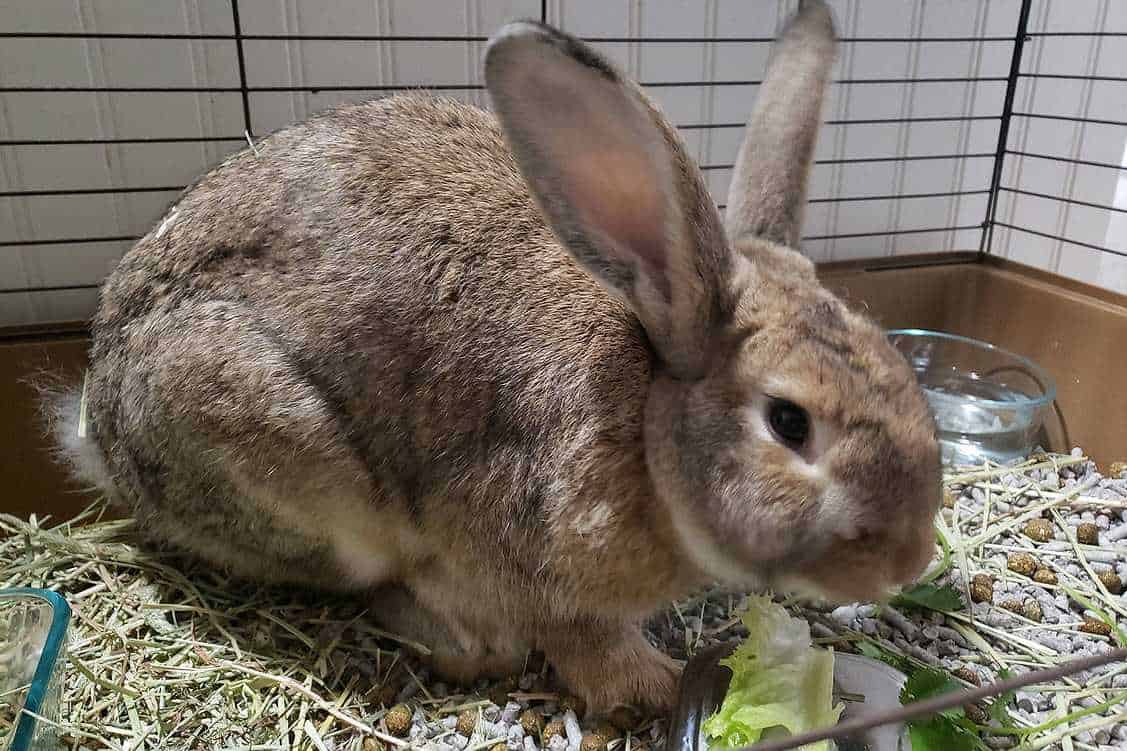 Female rabbits can show signs that they are more receptive to mating, such as:

Female rabbits are more territorial when they are in heat. Pet owners should be more focused when the rabbit is in heat. Even the calmest and docile rabbit might get aggressive and attack when their territory or hutches is trampled over.

To ease their sexual frustrations, rabbits might hump the objects and animals around them. It does not matter if it’s an unmovable and not alive object; the rabbit will instinctively hump it. They might also hump other animals and even other female rabbits.

When the doe is in heat, it might increase defecation, urination, and chin-rubbing. These are common patterns designed to mark their territory. However, when female rabbits undergoing heat urinate around the area, it’s a way to attract male rabbits through the scent.

This can be a big problem for domestic rabbit owners that have indoor rabbits. The increase in the defection and urination will produce a foul odor throughout the area. It’s advisable to get the rabbit neutered as soon as possible.

When the rabbit is in heat, they have a great urge to mate and breed. When that instinctive urge is not met, the rabbit might come restless and uncomfortable.

They might not sleep and have a lesser appetite. Most of the time, these symptoms might subside after a few days. However, it’s not recommended to let rabbits undergo this process.

They are pretty sensitive, and the increase in stress might trigger many health risks and make them more susceptible to sickness.

This is the only physical and non-behavioral sign that the doe is receptive to mating. Its vulva or the protrusion in its genital area will appear swollen and have a dark red, deep purplish color. The standard color of the rabbit’s genitals is light pink.

Do Male Rabbits Get into Heat? 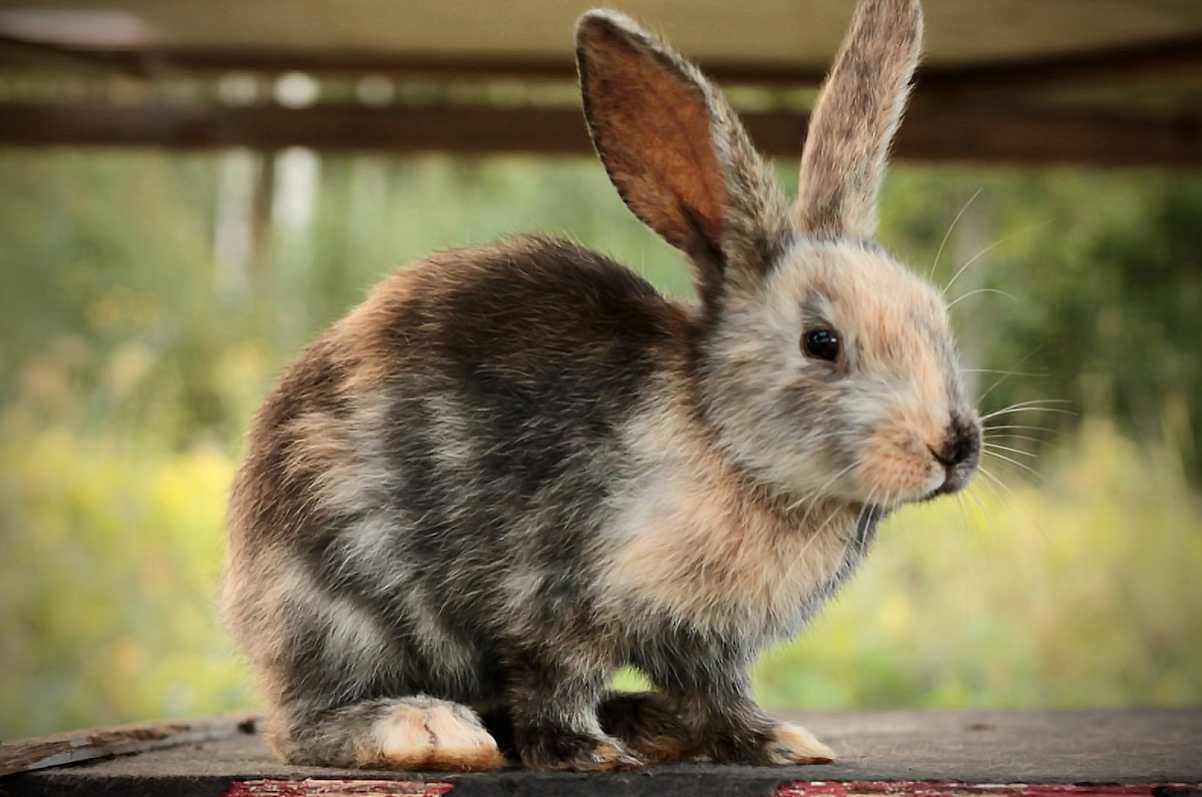 Like female rabbits, bucks also experience their first period of the estrous cycle when they reach sexual maturity at four months up to their elderly at six to eight years old.

Unlike female rabbits, they do not get a rest period and are receptive to mating throughout their life. However, bucks tend not to initiate any breeding activity with other rabbits when they are neutered.

Although they do not have a resting period or anestrous phase, the sexual receptiveness of male rabbits might influx and vary from high to low. They might show symptoms of heat for an extended time or shorter period, depending on their hormones.

The symptoms of the estrous period in male rabbits are almost the same in female rabbits. However, there are a few differences between the two. Bucks are also prone to frequent restlessness and aggression like the doe.

However, male rabbits are much harder to take care of when they go into heat. They mark their territory more so than female rabbits. They would urinate and defecate throughout the area, resulting in more bad odor.

Male rabbits are also more aggressive. It would gnaw and bite other rabbits and even their owners. It’s recommended to castrate male rabbits as they can be dangerous as a domestic pets, especially for children and inexperienced owners.

Do Rabbits Have Mating Season?

Domestic rabbits do not have a mating season. Not spayed and unneutered indoor rabbits will be in heat and do mating year-round. On the other hand, the wild rabbits have limited months to populate.

Kits or baby rabbits are not born with fur so leaving them in the harsh winter weather is not ideal. The fact that they are fur-less and mother rabbits tend to leave their young without any supervision makes the cold weather crucial.

Wild rabbits tend not to mate and breed from October to February or around autumn and winter to combat this risk. They would come back to mating in springtime or March.

To answer the question, when do rabbits get into heat: they are always in heat as they sexually mature throughout their life or until they are spayed. Knowing rabbits’ mating and reproductive anatomy is excellent for keeping the rabbit population in check.