16 Common Rabbit Behaviors and Their Meaning

Like any animal, rabbits also have their own fun little behavioral quirks to convey different messages. As we are not rabbits, this behavior can be confusing for us to decipher. In this guide on sixteen rabbit behaviors and their meaning, we can understand rabbits better.

Thumping Their Back Feet

Rabbits are known for their strong feet and high jump. Along with that, you can also observe that they would sometimes thump their feet. In the wild, thumping is a way to warn other nearby rabbits by sending vibrations in the ground.

This behavior is very beneficial in the wild. The thumping will travel under the ground where younger kits might have been nesting. Their ear can also hear the thumping rabbit foot at a great distance, which may alert them and save their lives.

For domesticated rabbits, thumping may be a sign of perceived danger. As observed, they mostly thump their back feet when an animal or human is new to their house or backyard and invade their space. In summary, thumping is a clear indicator of distress. 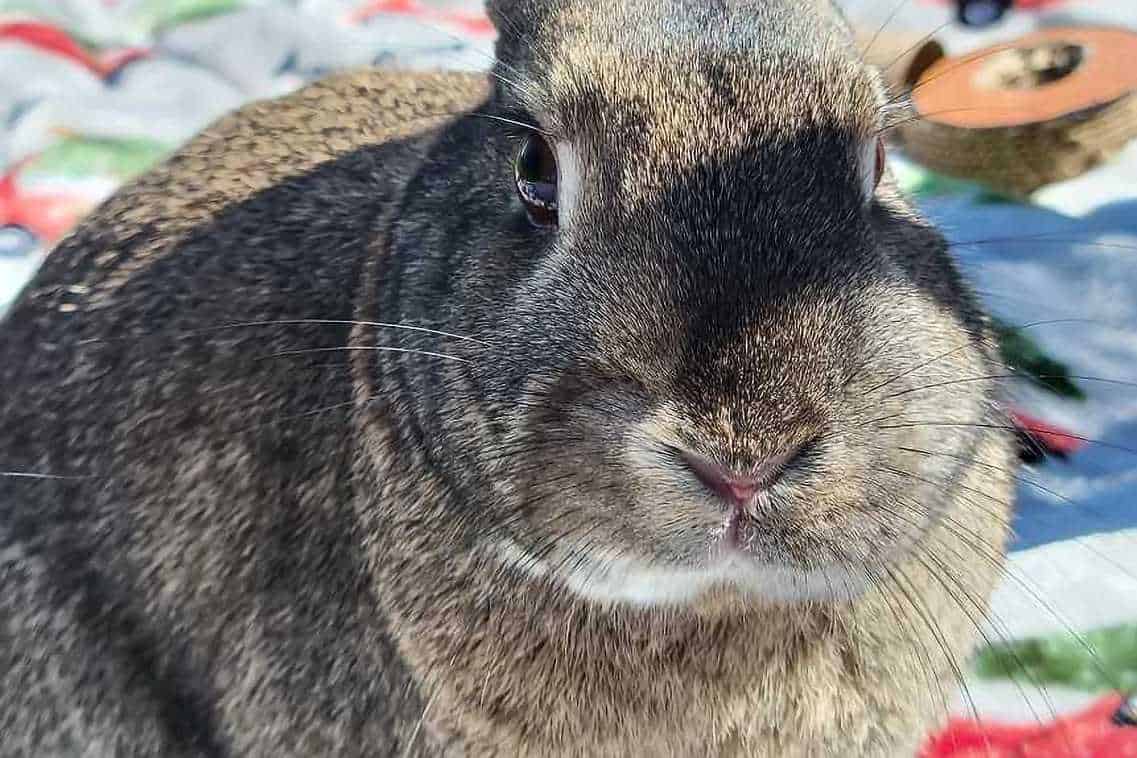 Rapid twitching or sniffing of the nose is a common sign of curiosity for rabbits. Like other pets such as dogs and cats, rabbits also use their smelling senses a lot. This behavior mostly happens when a new thing, food, or animal is in the vicinity of the rabbit.

Nose twitching can also happen if the rabbit is excited and happy with the item they smell, such as treats, owners, and close rabbit buddies. Other than curiosity and excitement, rabbits can also rapidly twitch their nose when hay and feeds get stuck in the holes. 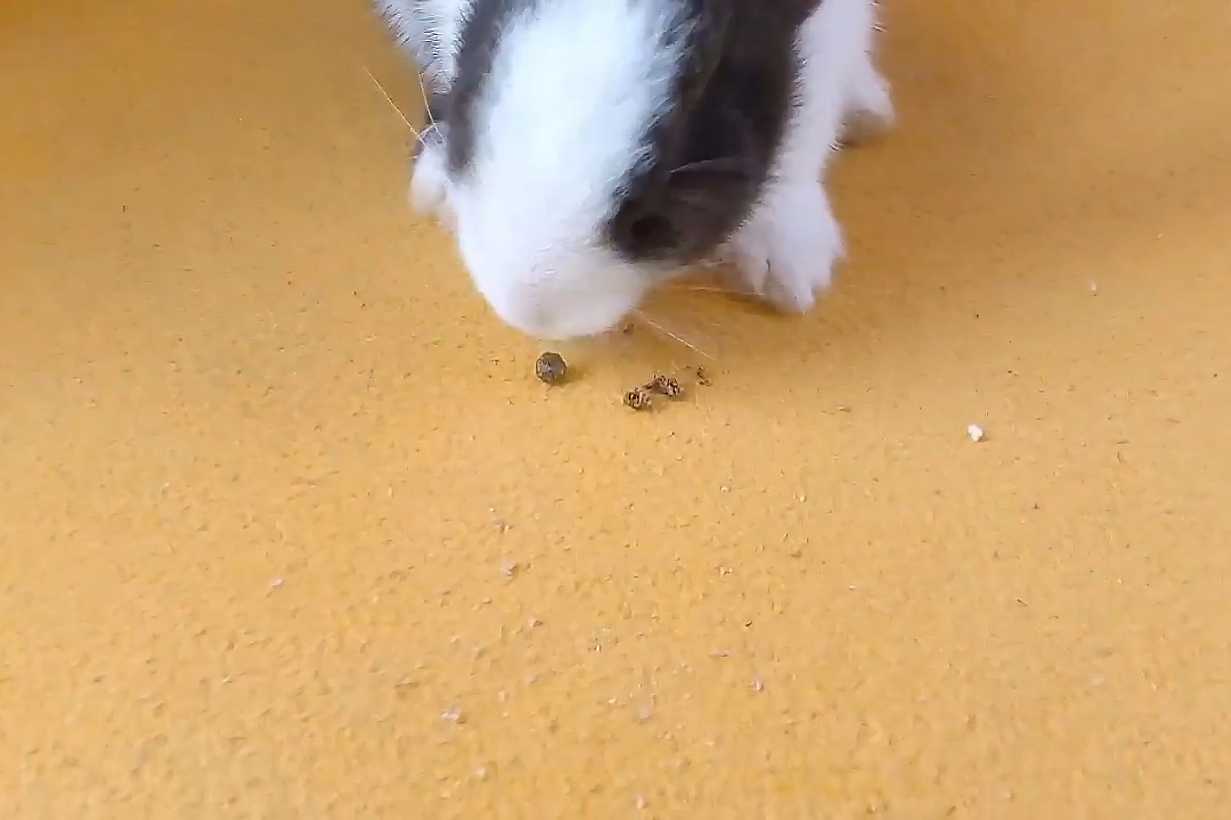 Cecotropes or partially digested droppings are commonly produced and eaten by rabbits. It may look disgusting, but you should not stop your rabbits from eating cecotropes as they contain vast amounts of vitamins and minerals beneficial for your pet.

To differentiate cecotropes from normal droppings, they are more cluttered with a sticky liquid coating. Hard rabbit dropping is mostly pellet-sized and scattered throughout the place.

The rabbit might eat their cecotropes straight from their anus or off the ground. They can be seen hunching towards the base of their tail as they chew.

Circling Their Owner or Other Rabbits

Circling their owners and other rabbits is a sign of excitement to rabbits. You might observe it when you come home or give them treats.

Lowering Head in a Submissive Pose 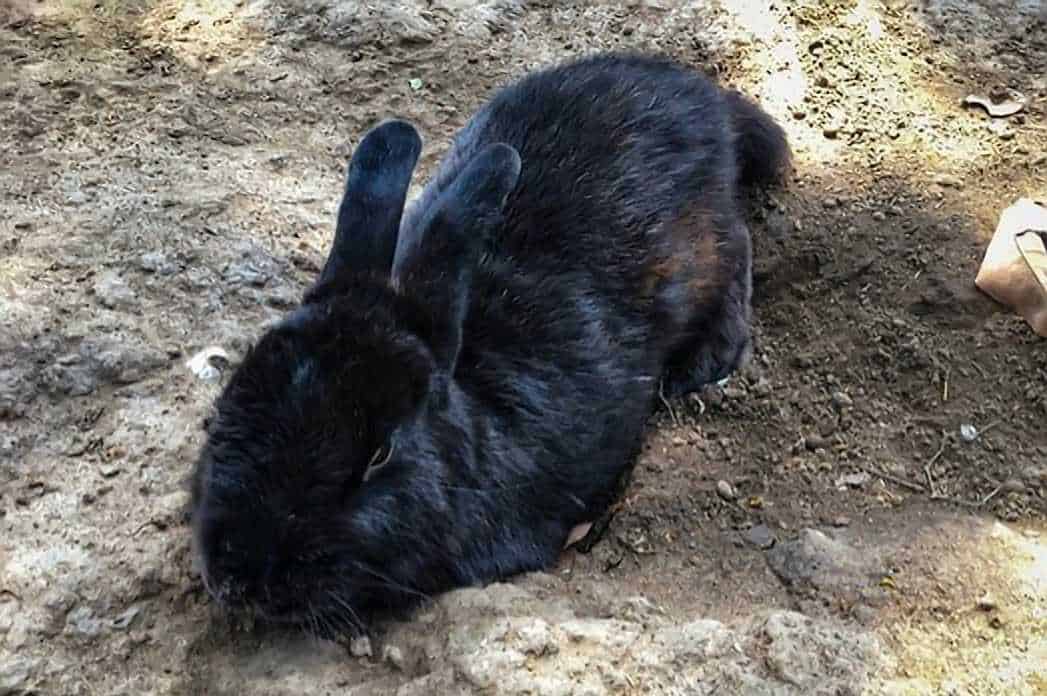 Lowering their head while their backside is still arched is a sign of a submissive stance with rabbits. It can either mean that they do not want any altercation or want pets from their owners. The second option is most familiar with domestic rabbits.

Lowering their head is not limited to humans. This behavior is a common way to get affection and grooming from other rabbits.

A gentle nudge might accompany this behavior to let you know they want pets from you. You can gently pet the rabbit at the back of their ears, top of the head, and along their back.

Honking or the short and rapid inhale of the rabbit is a sign of affection for their owners and other rabbits. You can observe this behavior as your pet or groom the rabbit’s fur. 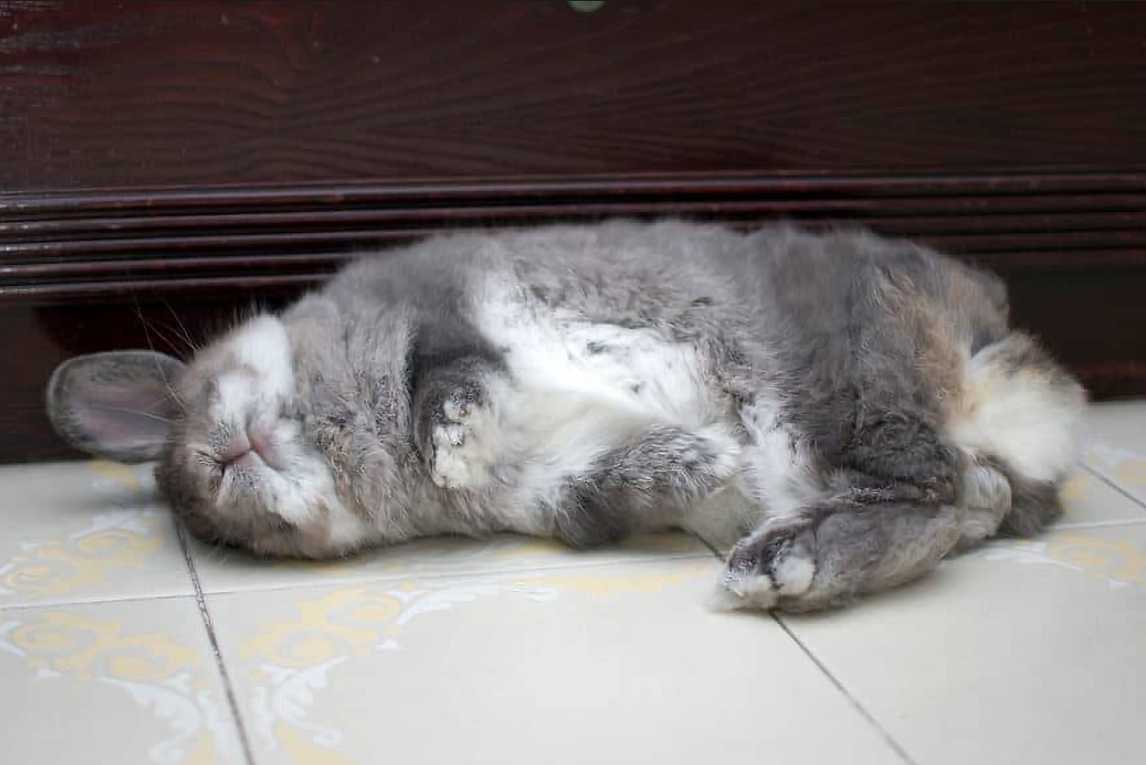 Flopping is a behavior that might seem concerning for new rabbit owners but adorable for seasoned rabbit owners. It’s when the rabbit will suddenly flop onto their side or all the way onto their back and sleep. Although it looks like they fall into unconsciousness, you have nothing to worry about.

Flopping down signifies that the rabbit feels safe since it lets its guard down and completely lays down and sleeps. It means that they trust and feel protected by their surroundings.

Rabbits have natural smell-producing glands on their chin. They use this body feature to mark their territory and the animals and humans they perceive to be one of their own. You might observe this with their favorite food bowl or toy.

Chin rubbing is also a way to show affection towards their owner. If your rabbit rubs its chin on your body parts such as legs or hands as you pet it, it’s a clear indicator that the rabbit feels safe with you.

Spreading their dropping is a way for rabbits to mark their territory. It’s a more common behavior in the wild, where they share the meadows with other animals and rabbits. However, the habit can still be seen and observed with domestic rabbits. 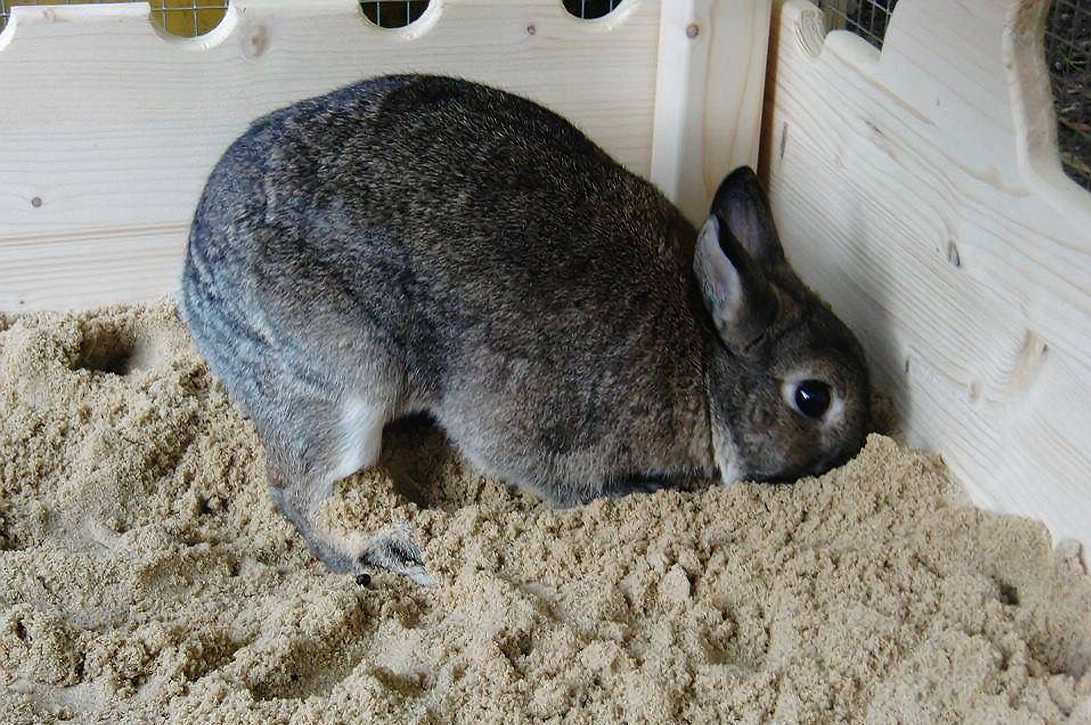 Wild rabbits dig in the ground as a way to protect themselves. As prey, rabbits have little to no means of protecting themselves from vicious predators. Digging is a mechanism designed to get away from birds and lions that want to take them as a snack.

This behavior is also observed in pregnant doe. It’s a nesting behavior that occurs at around 28 days of gestation. Digging a burrow is a way for mother rabbits to protect their young.

Besides protective and nesting reasons, rabbits also dig around even if there is no soil to signify playing. You can observe it when they interact and play around other animals. Digging is also a way for rabbits to trim their nails, similar to the scratching mechanisms of cats.

Biting is a common sign of aggression in rabbits. However, their bites can range from nipping to a full-blown taste down. They might nip animals or their owners when they are uncomfortable or feel threatened as a way to keep them away. This can happen when you pet them too long, and they do not want it anymore.

However, full biting is a way to protect and limit the animals and humans that are entering the rabbit’s perceived territory.

Binky is when the rabbit jump high and thumps or kick its foot while mid-air. It’s an indication that the rabbit is pleased and excited. You can observe the rabbits do it while playing, getting delicious treats, or greeting their owner.

Fast Running Around or Zoomies

Zoomies are pretty typical for pets such as rabbits, cats, and dogs. For rabbits, it’s also called rabbit 500. It’s when they run around at full speed, either with a companion or alone. It indicates that the rabbit is very excited and ready to play around.

Rabbits use the scent of their bodily fluids and hormones to ward off animals from their territory. Spraying urine can signify that the rabbit is claiming the surroundings as for its own.

This behavior does not only apply to places and areas the rabbit habituates in. They can also spray their urine toward humans, other rabbits, and pets such as dogs and cats.

To differentiate spraying urine from normal urination, you can look at how they pee. Normal peeing will be directed downwards to the ground while spraying urine upward to humans, places, or other animals. The pee is angled that way to get a larger area.

They do not mean any harm with their urine. It’s a sign that the rabbit considers the other animal as its own. However, this can be a hassle as rabbits tend to smell. You can neuter and spay your pet rabbits to limit this habit.

The rabbit’s big front teeth are one of their most notable features. It serves many functions, such as grinding their pretty hard food like hay. Besides the food, rabbits also love to chew inedible items such as furniture and bedding.

Chewing can be a way for them to explore. You can observe this with plastics and sacks that conceal their food. Rabbits are also generally curious animals, so they love to chew items they find around the house.

Chewing a lot also lessens the length of their teeth and is a mechanism to keep them from having malocclusion. It’s recommended to keep a block of wood in the cages of domestic rabbits, especially if they do not have things to chew on.

Laying Down in a Superman Pose

The superman pose is when animals have their arms and legs stretched out straight. It’s an excellent sign of a content and relaxed rabbit. It means that the rabbit feels completely safe and protected in its surroundings.

As prey, they mostly need to be alert at all times in the wild. By straightening their body and completely laying down, they are pretty vulnerable with no means to run and hide, so take it as a sign that they completely trust their surroundings.

Rabbit behavior can be confusing for new and inexperienced rabbit owners. I hope that with this guide on their behaviors and what they mean, you will have a much easier time understanding and taking care of your furry friends. 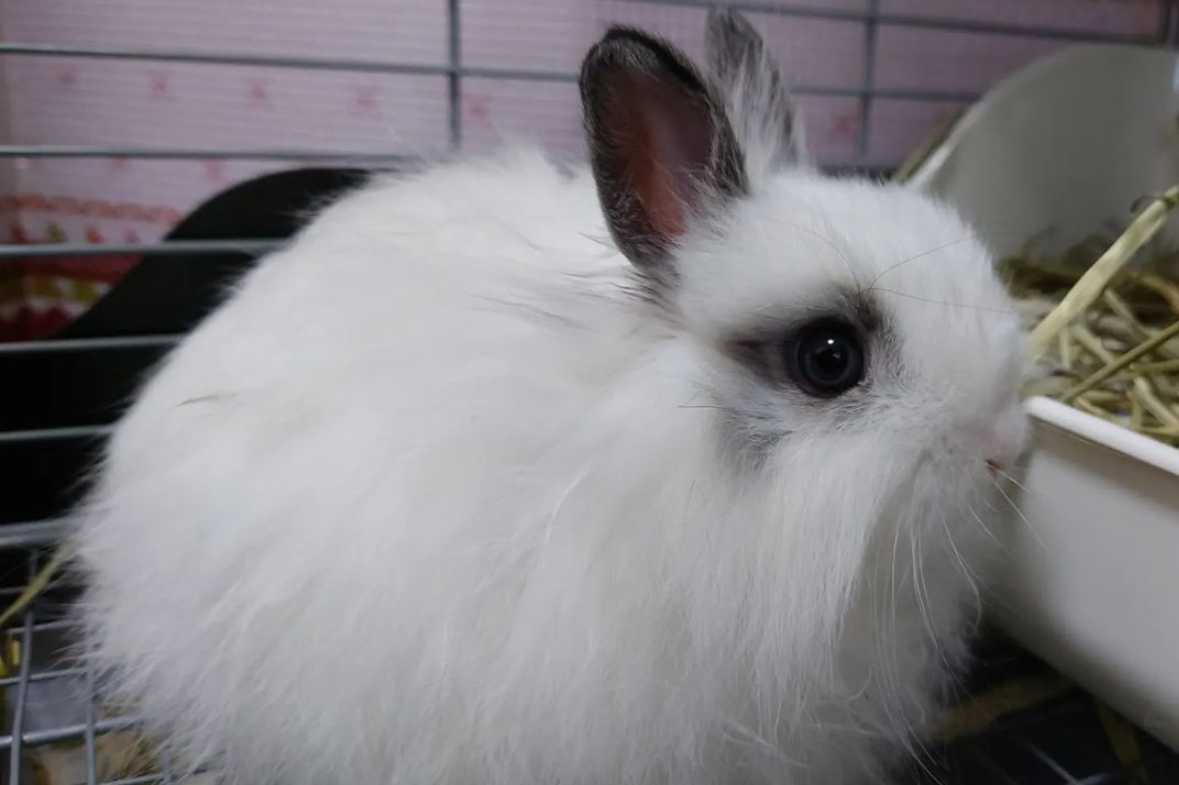 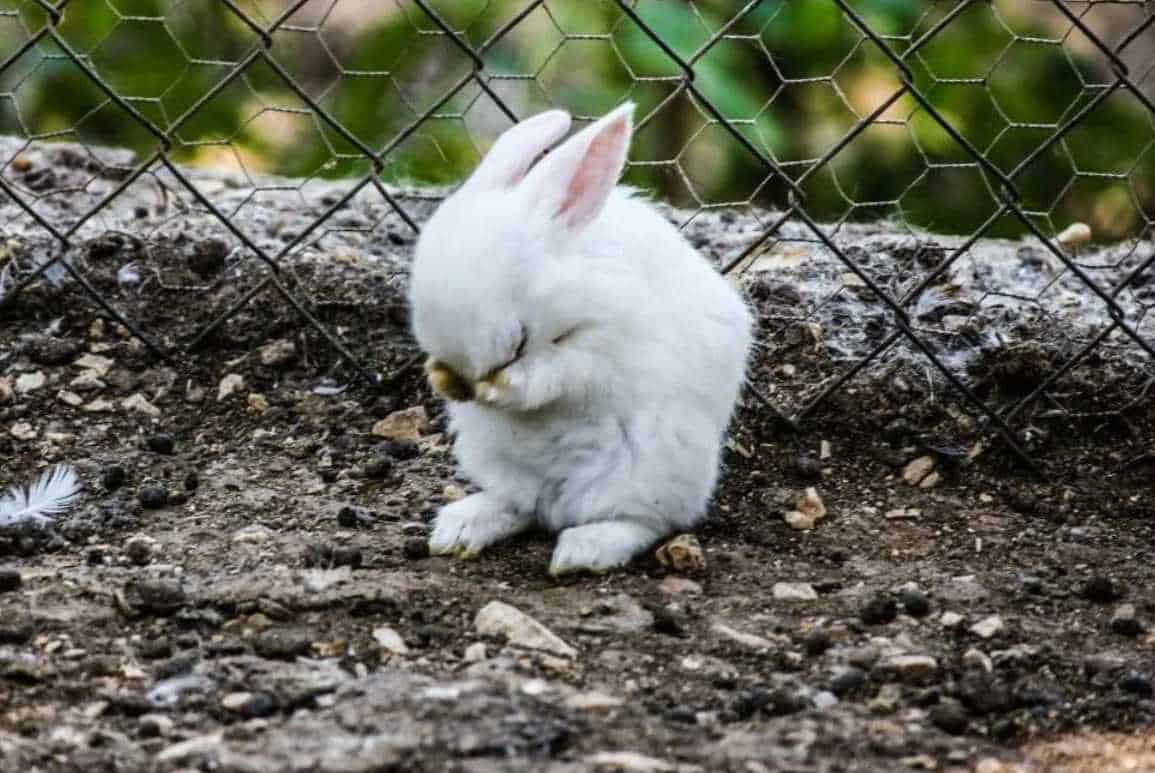 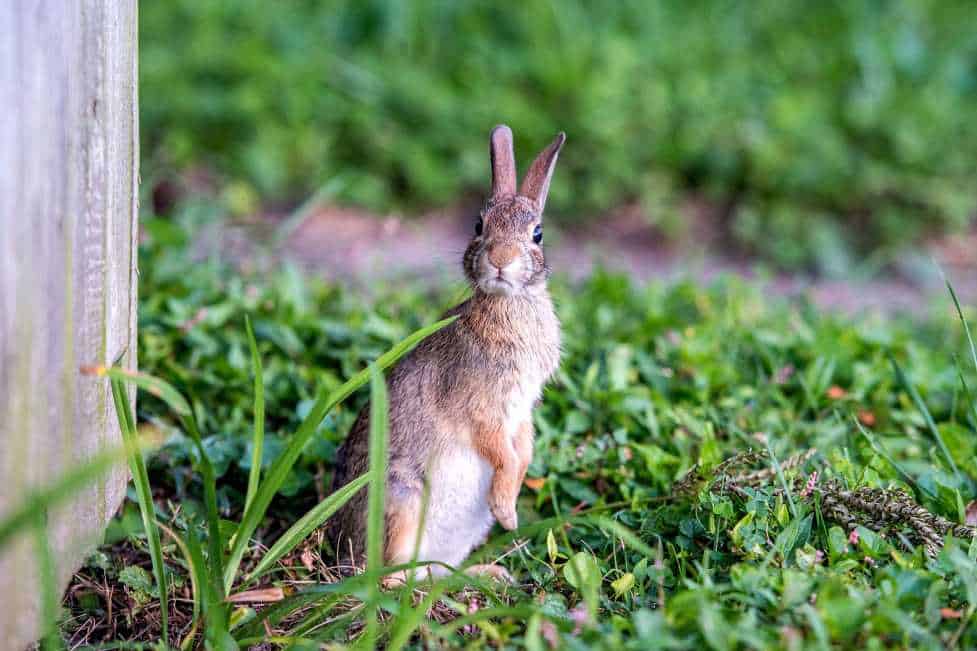