How Fast Can Rabbits Run? 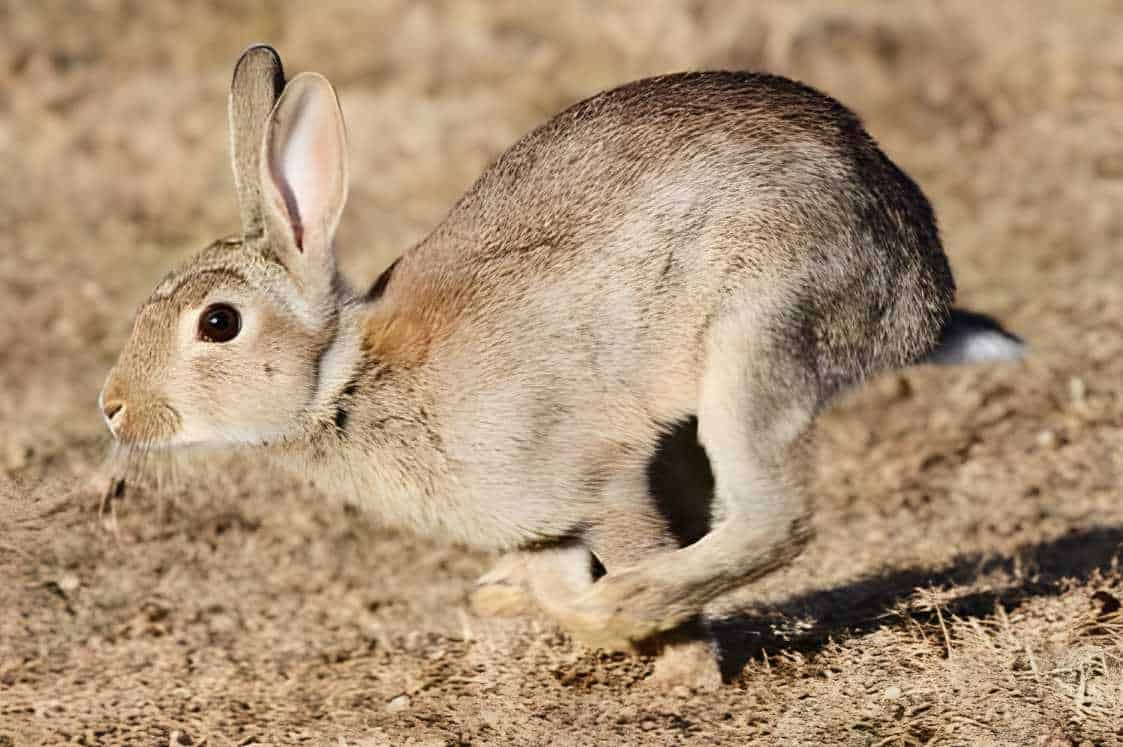 Most rabbit species had descended from Europe, specifically from the Iberian Peninsula in ‘Hispania’ or Spain, which Phoenician merchants call the ‘land of the rabbits’ and southern France. Before they became common pets, people used to hunt them down as a source of food.

The first domesticated wild rabbit was by the French monks of the Champagne Region in 600 A.D. They used to keep the little creatures in cages as a stock of food source and do breeding experiments. Britons also adapted the testings, which widened the variety of the rabbits.

When the Victoria era began in the 19th century, merchants traded rabbits in different parts of Europe, causing more kinds to emerge.

Various coat types, colors, ears, body and face shapes, and sizes. However, middle-class women kept the rabbits as pets instead of becoming a dish.

Upon the end of the era, the European traders had begun to import rabbits to the United States. Americans used to hunt down wild rabbits before the trades.

But when European breeders introduced the domestic rabbits to the country, the species also expanded, resulting in American breeds.

Although there are still wild rabbit species hunters try to hunt down, the domestic ones have become popular family pets treated just like dogs and cats. Owners understand the importance and intelligence of these creatures and continue to study the animal’s behavior. 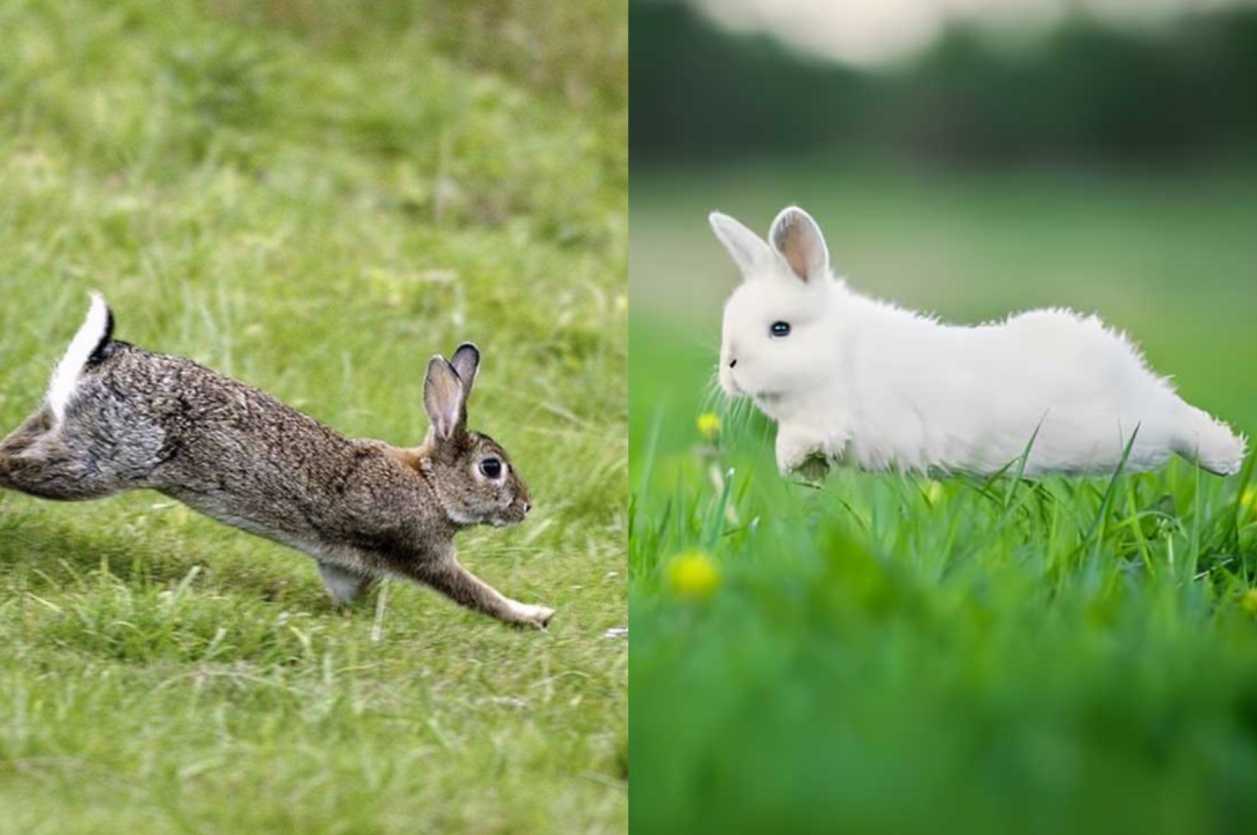 Knowing the difference between the wild and domestic rabbits will help understand how fast they run since their characteristics affect their speed. Their appearance is almost identical by having large ears, infamous teeth, and cloudy tails, all known physical appearances of a rabbit.

What differentiates them is wild ones mostly have a lighter brown coat color, longer and thinner head shape, narrow almond-shaped eyes, upright ears, a particular size, and are lightweight as they eat less.

Their weight also contributes to how fast a rabbit can run since they have less mass to carry.

Meanwhile, domesticated rabbits can often be seen with spots and come in different colors, chubby cheeks, wide and round eyes, different sizes ranging from dwarf to giant, and are heavy as they always have food available. Their ears are floppy but can sometimes become upright when attentive.

No one should keep wild rabbits as a pet. They were bred for generations to avoid predators, building a run or fight response. It also causes them to be wary of humans, always avoiding them or trying to run, kick, or even scream when caught. Keeping a distance is advisable.

Meanwhile, pet rabbits are more trusting toward humans as they know they are being taken care of by one. These creatures might even hop to them as a sign of curiosity.

They are timider than the wild ones as they like to explore new territories. Wait for them to come to confirm they are domesticated.

However, do not let these rabbit species run into the wild. These rabbits do not know how to survive in the wild as they do not have the same instincts as the wild ones.

They will struggle in adapting to groups of rabbits as they have already established a colony, which means they will have no allies.

The lifestyle of a wild rabbit includes running around 10 acres of land and eating grass, clovers, wildflowers, barks, and twigs. They also do not live long, as their average lifespan is two years. Domestic rabbits are not as active as the wild, eat treats and rabbit foods, and live for ten years.

The wild rabbits will never approach a person but love to travel by group. They move more freely in their territory as wild rabbits know where they can go for safety. Meanwhile, domestic ones will roam around solo as they try to explore the place, including the people around.

How fast can a rabbit run? 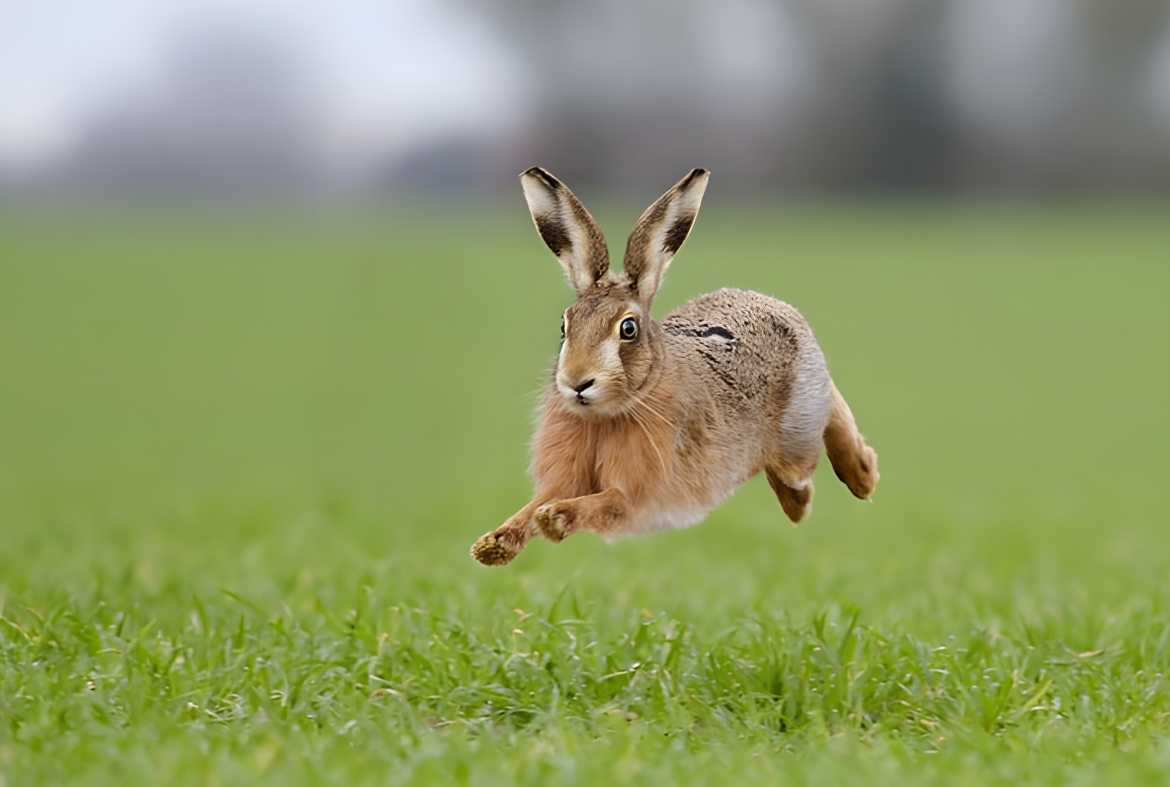 Because wild rabbits are lightweight, they can move more quickly and run fast. These rabbits, especially Cottontail rabbits found in North America, developed agility from predators. Not only do they run fast, but their jumping and turning skills are also on point.

Wild rabbits hop for about 35 to 45 miles per hour. They are faster than the speed of the fastest man in the world, Usain Bolt, who can run for 27.33 miles per hour at most.

Domestic rabbits are also fast runners. These species’ speed ranges from 25 to 35 miles per hour, with a top speed still beating the fastest man.

These creatures might be fast, but they cannot maintain their speed for long. They sprint rather than a constant hop, making their first few seconds fast and gradually slowly. However, they can still leap at a 10 feet distance and 4 feet height in just one powerful jump.

Instead of running, the rabbits hop. They use their hind legs to push themselves off the ground and land with the assistance of their front feet.

This method keeps their balance and generates momentum, allowing them to do another hop. Fast animals like cheetahs also move this way.

What is the fastest rabbit? 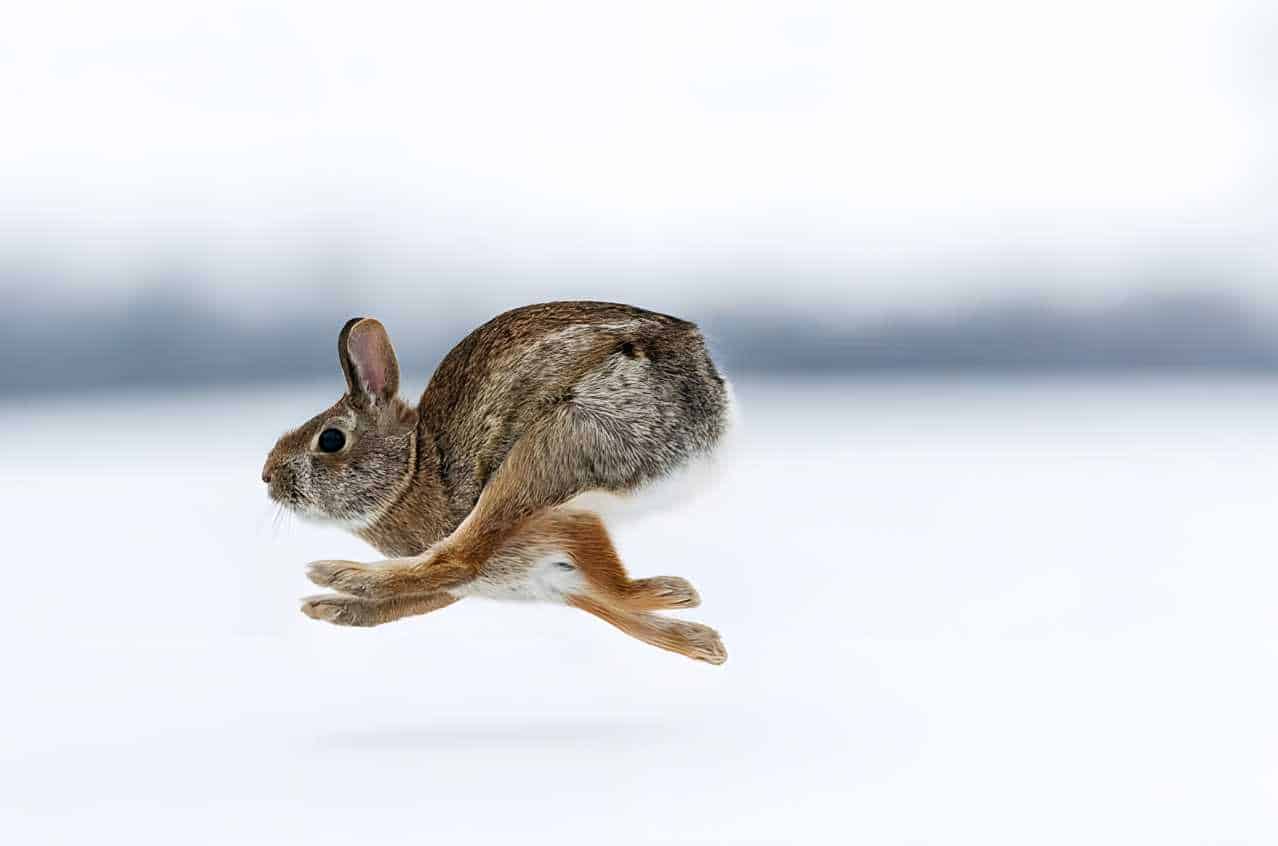 The jackass rabbit or jackrabbit is the fastest of all the rabbit breeds globally. They reach 45 miles per hour, about 72 kilometers per hour. Jackrabbits are hares, which means they are more significant than the standard rabbit size and have longer legs.

Hares are known to be faster than rabbits as they are longer and their limbs are more powerful. However, rabbits, like cottontails, are intelligent runners.

Instead of hopping in just one direction, they create a zig-zag motion to leave scents all over the place and confuse predators who use smell for hunting.

Meanwhile, the slowest rabbit out of all the species is the snowshoe, also like hares. Their top speed can only reach 27 miles per hour, but an adult snowshoe can leap 10 feet apart.

People commonly find this breed in Canada and the northern United States, primarily in mountain ranges.

To compensate for the lack of speed needed to escape predators, these hares confuse them with the exact location. They are skillful at changing directions instantly and doing vertical leaps. You may watch this video to learn how rabbits confuse the predator without running fast. 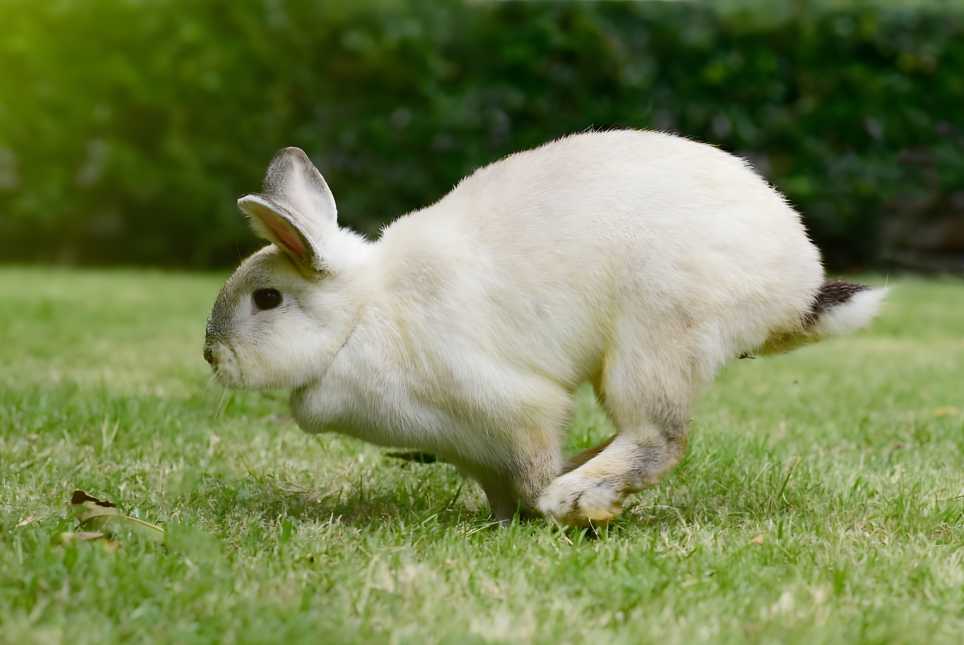 Their powerful hind legs allow the rabbits to do all these fantastic things. These legs are longer than their front ones. There is a theory that the longer their legs on the back are, the faster they hop. Furthermore, they are digitigrade, using more leverage from their ankle.

Digitigrade is faster in both running and jumping. They keep their energy in their hind limbs, making them strong when the animal lengthens them.

This characteristic is advantageous for prey or predators as it makes less noise when landing. Furthermore, they have potent kicks due to the built-up energy.

Their incredible muscle fibers also help their endurance and acceleration. There are different types of muscle fibers: slow-twitch and fast-twitch.

The slow-twitch functions help with the endurance for tasks that will require lots of stamina. Marathon runners use 80% of these muscle fibers.

Meanwhile, fast-twitch helps give the runner a boost of speed and acceleration for sprinters like rabbits. This muscle fiber is also divided into the oxidative, which uses oxygen for endurance, and glycolytic, which does not need oxygen but is the fastest.

Rabbits have many fast-twitch glycolytic, making them fast sprinters for a short time.

In comparison to other fast animals, rabbits may not seem fast. However, their speed is still incredible since their sizes are not as big as the other creatures. They also accelerate quickly rather than gradually build up momentum.

Rabbits can also change direction immediately despite running full speed, called binkying. This skill might be the best shot of any rabbit, fast or not, in escaping predators.

Here is a video of a rabbit binky to see how rabbits turn quickly.

After knowing how fast a rabbit can run, it is evident that they are small but terrible creatures. They are fast runners, brilliant, and skillful in other ways.

They don’t only use their speed to escape predators but their wits by confusing them with their scents and quickly changing directions.