As grazing animals, a good diet of hay and grass is the cornerstone of a rabbit’s quality of life. You can have a happier and healthier rabbit by providing the right type and combinations. This article will tell you all about the six best hay for rabbits. 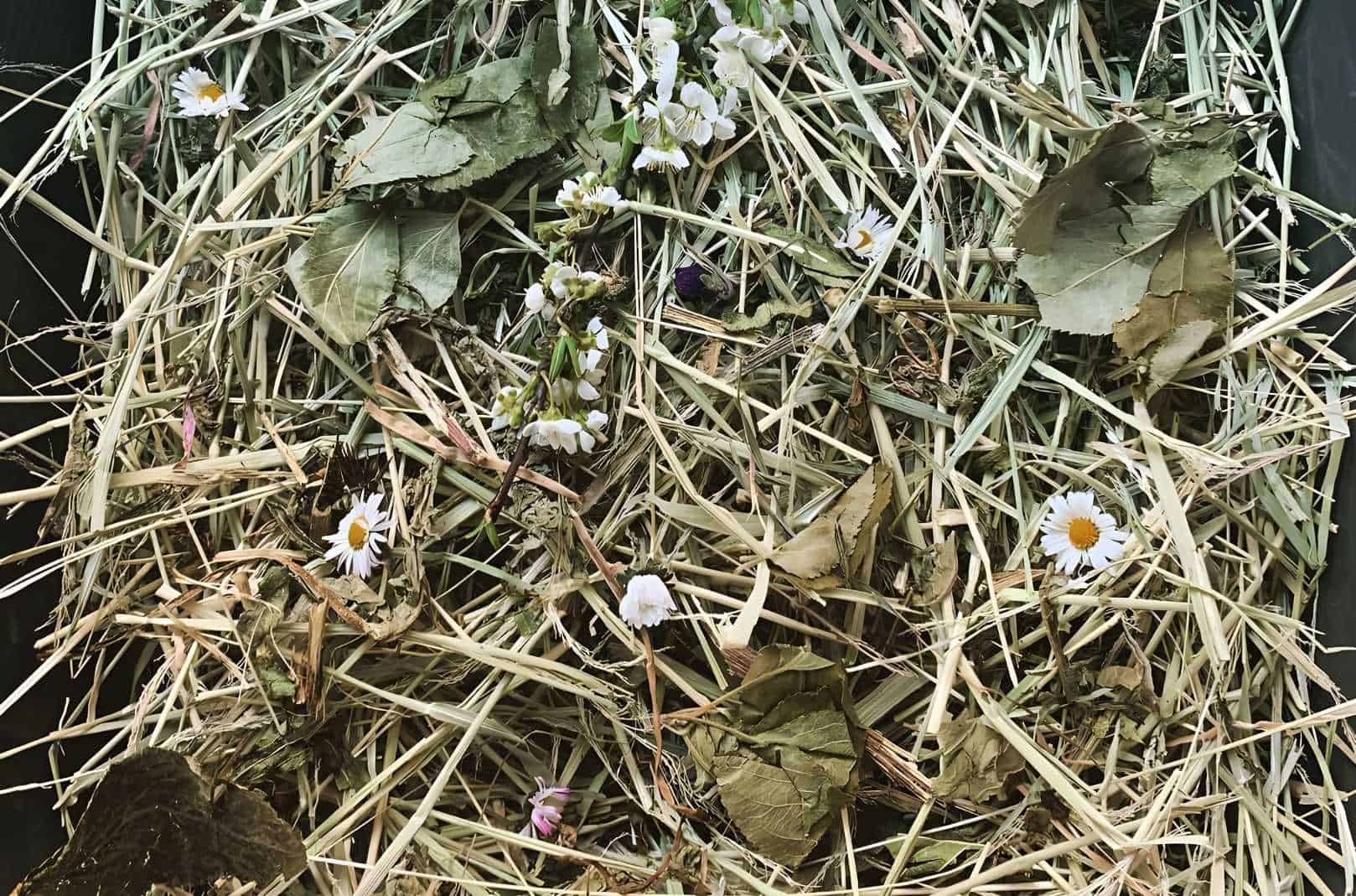 Timothy hay is the most recommended for standard rabbits at any age. It’s a perennial grass that grows in colder climates. Most produced timothy hay has a combination of leaves and stems. Which cut you will need depends on the health and age of the rabbit.

The first cut is high in fiber and low in protein and fat. It’s usually the cut for adult rabbits as it’s low-fat and lacking in calcium. The first cut of timothy hay can be coarse and thick due to the high amount of stem, so it’s recommended for older rabbits as they have stronger teeth.

The second cut is the most prominent as it can be fed to adult rabbits and kits. As an all-rounder, it has high fiber and a moderate amount of calcium and protein, along with other vitamins such as carotene and vitamin E. Unlike the first cut, the second cut of timothy hay has more leaves and has flexible easy to chew stems.

The third cut is lower in fiber but higher in protein and calcium. It’s a mix of many leaves and a minimal amount of stems. It’s mainly used as fodder for young rabbits as it can help the development of their body.

Timothy hay is considered one of the primary hay sources for rabbits, including meadow and Bermuda hay. They can be fed daily and serve as food maintenance to kits and adult rabbits. 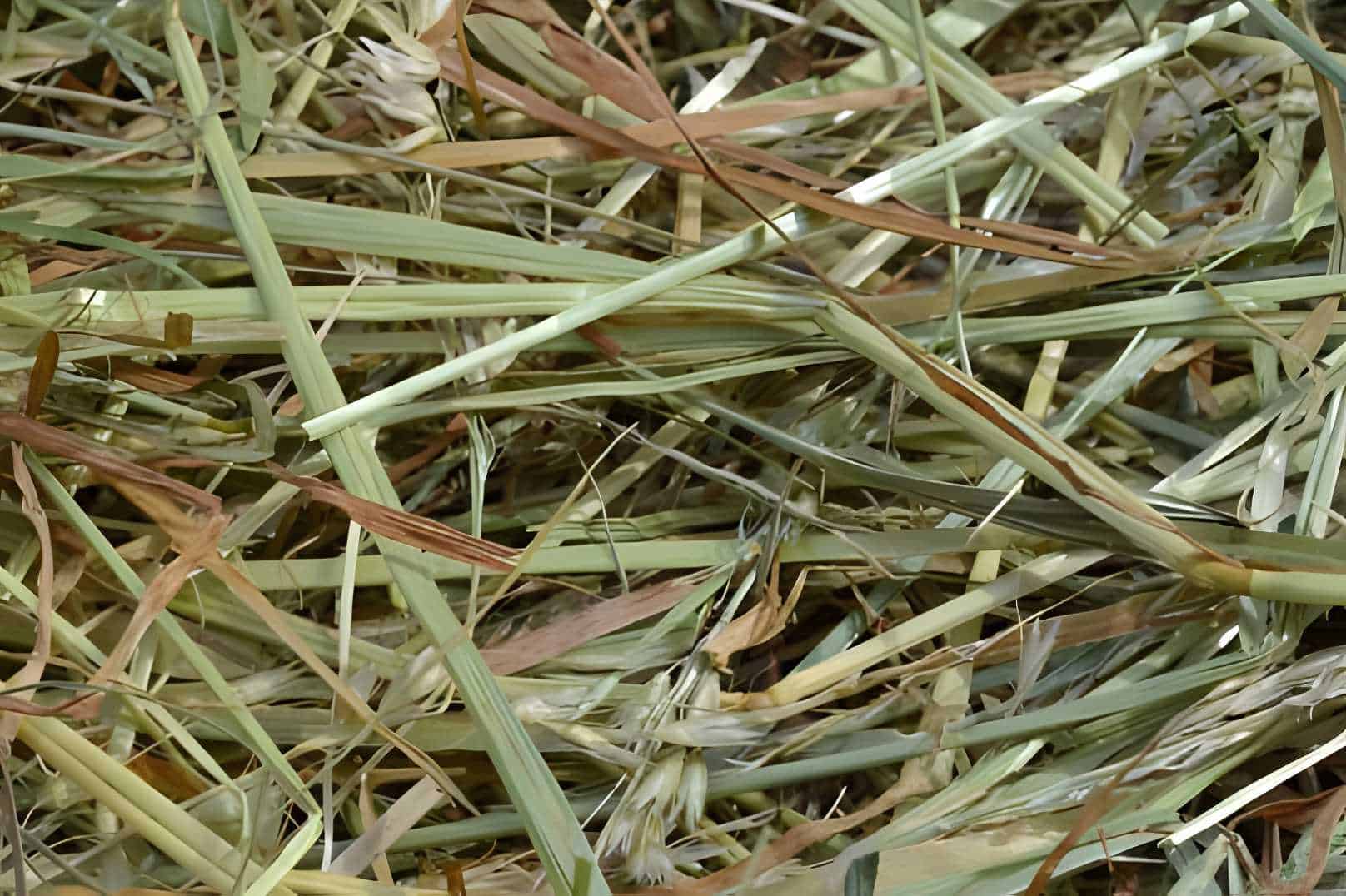 Meadow hay combines various grasses such as timothy, Bermuda, oat, barley, etc. Along with grasses, most meadow hay fodder contains other plant materials such as clover, dandelions, and plantain.

Compared to other types of hay, meadow hay varies in nutrients, texture, and taste. It’s best to check the packaging before buying it. This ensures that the meadow hay you are buying is suitable for your bunnies.

It contains many vitamins and minerals, high fiber content, and low calcium and protein. If it’s not available, meadow hay is an excellent substitute for timothy hay.

Meadow hay is also an all-rounder, perfect for kits and adult rabbits. When buying meadow hay, choose a dried green one as they contain the most nutrients. It also has a softer texture and lots of leaves. 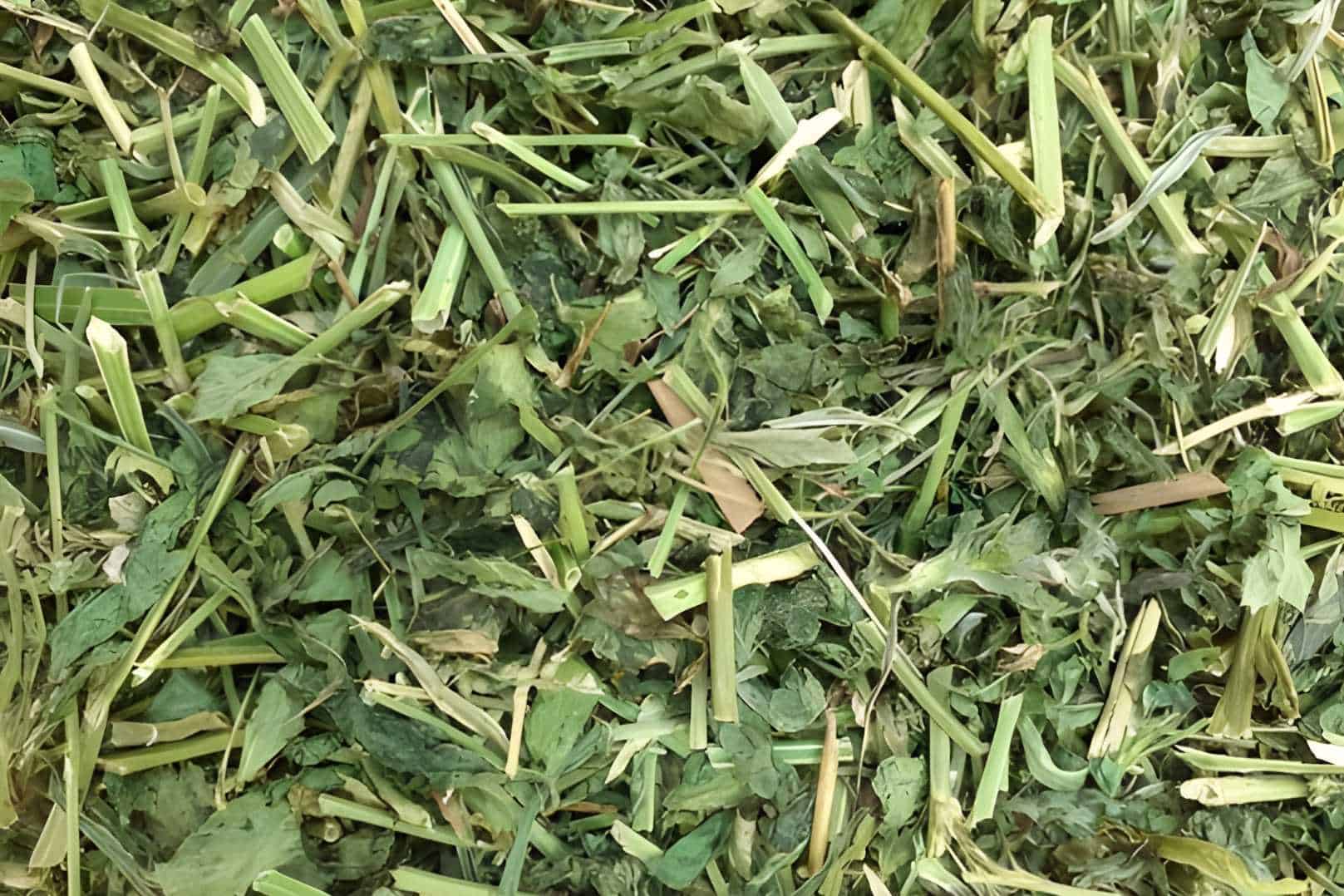 Compared to other hay in this list, alfalfa is not a type of grass as it’s a legume. As a rabbit feed, alfalfa hay has the highest calcium and protein. Due to its nutritional value, it’s not recommended as a maintenance feed for adult rabbits.

On the other hand, kits can get many benefits when eating alfalfa hay. Calcium and protein are vital nutrients when it comes to growing bunnies. It also has a sweeter taste, perfect as an introduction to feeding as the baby rabbits start to wean.

Besides kits, alfalfa hay is excellent supplemental hay for malnourished and sick rabbits. It’s a perfect way to gain back the weight and nutrients they lose. The high amounts of calcium and protein will also help them gain back muscle and bone strength.

Alfalfa hay works best combined with other hay such as timothy or meadow hay. By using it as additional fodder, the other hay will compensate for the lower amount of fiber in alfalfa hay. The best way to feed alfalfa is in moderation. 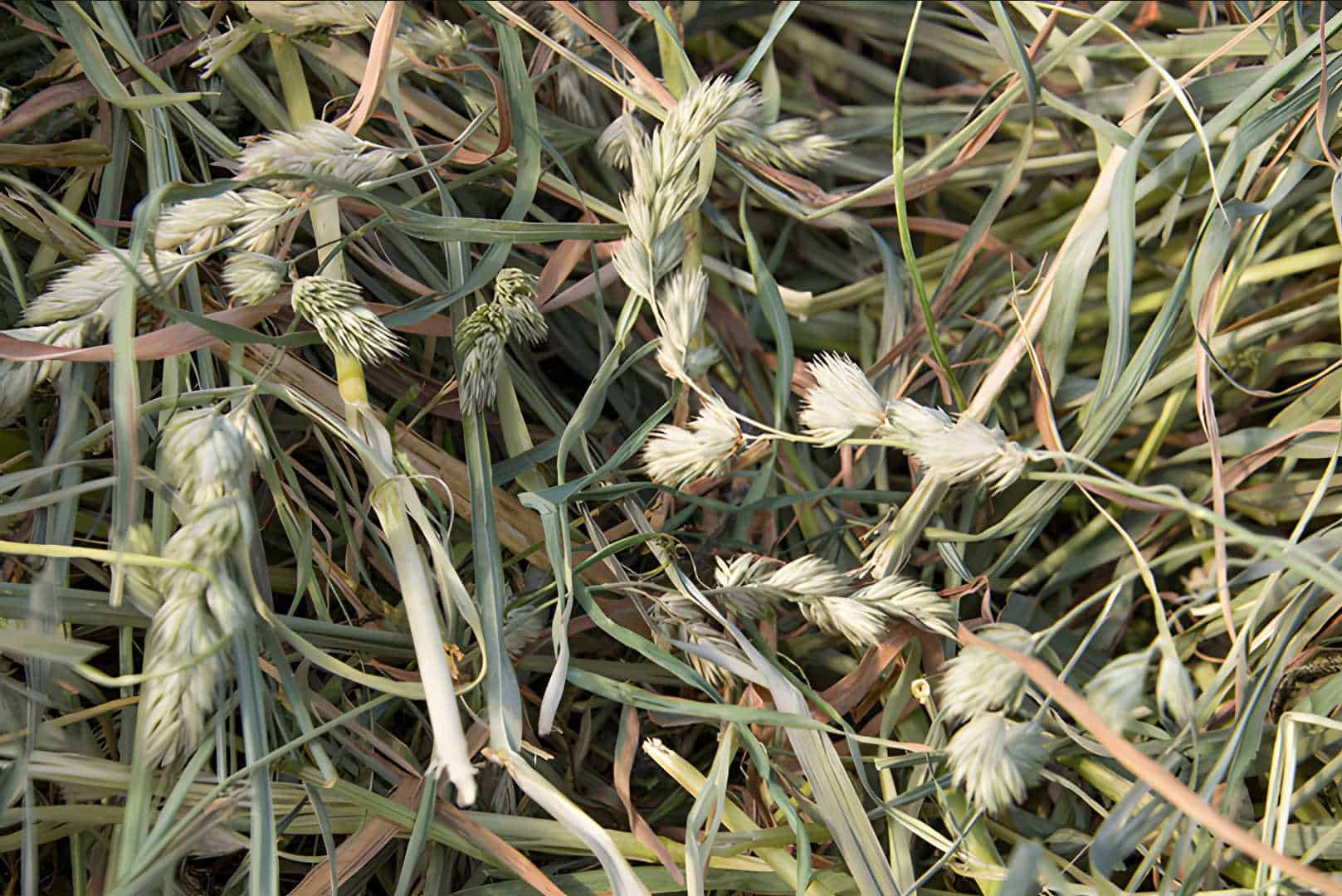 Orchard hay (also known as cocksfoot in Europe) came from the cool-season orchard grass. It has high fiber and low calcium and protein.

It can be good supplemental hay when combined with other types such as timothy hay. Rabbits also like this hay due to its sweet taste and soft texture.

It’s more accessible and drought-resistant than timothy hay. Picky rabbits will also opt for orchard hay as it’s tastier and sweeter. As a supplement fodder, orchard hay is recommended for rabbits that suffer from digestive problems due to its high fiber content. 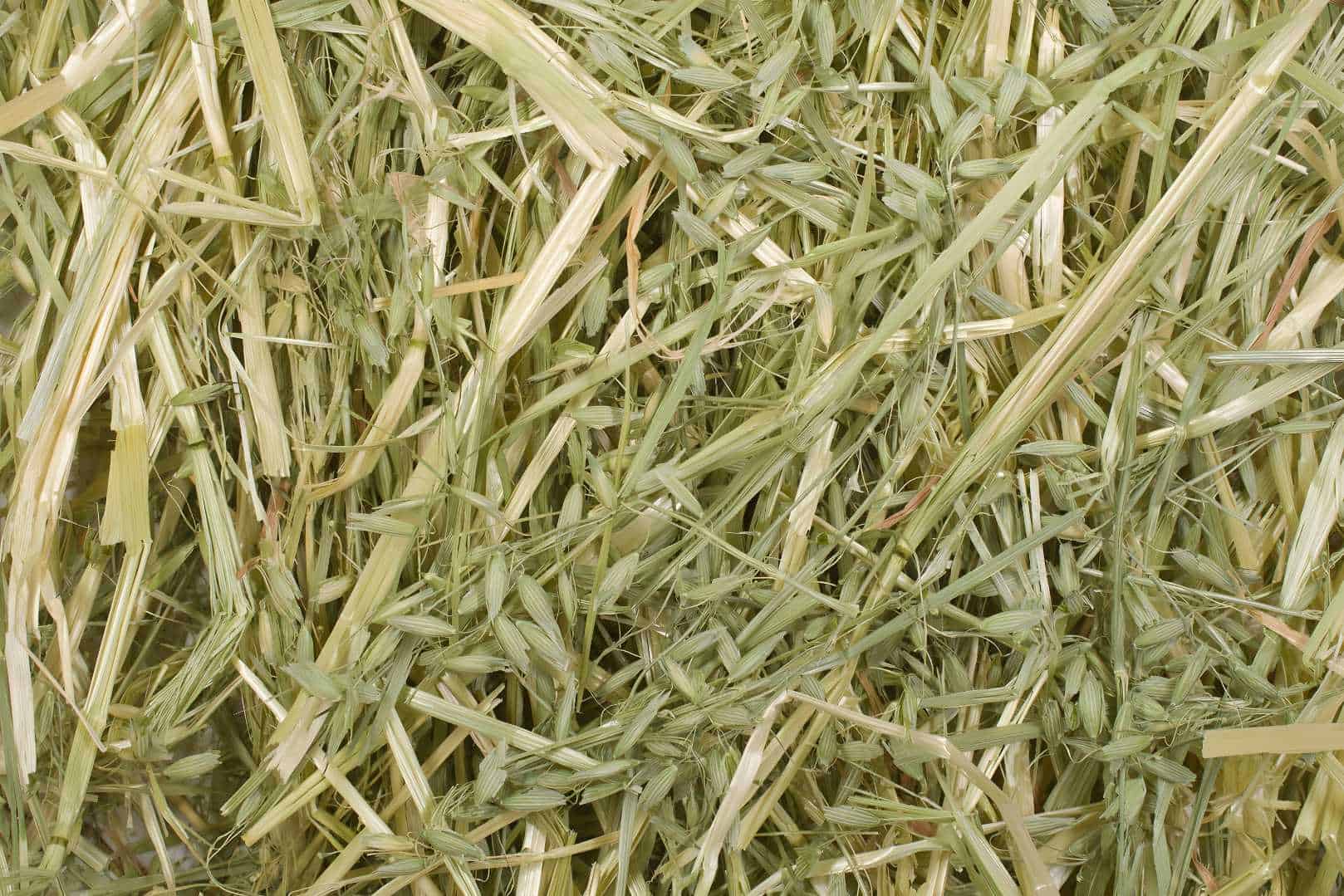 Oat hay is the perfect hypoallergenic option for rabbit owners with hay fever or commonly known as allergic rhinitis. It’s a great source of fiber and low in calories, perfect for overweight rabbits.

When choosing which oat way to buy, make sure that it’s green in color. Older and drier oat hay can become too coarse and lose many nutrients compared to fresher varieties. However, yellow dried oat hay can become good bedding for rabbits.

Oat hay is not advisable as the primary food source for rabbits. However, it’s a great supplement when mixed with timothy hay. It can provide a good amount of fiber, perfect for improving the absorption of nutrients and metabolism. 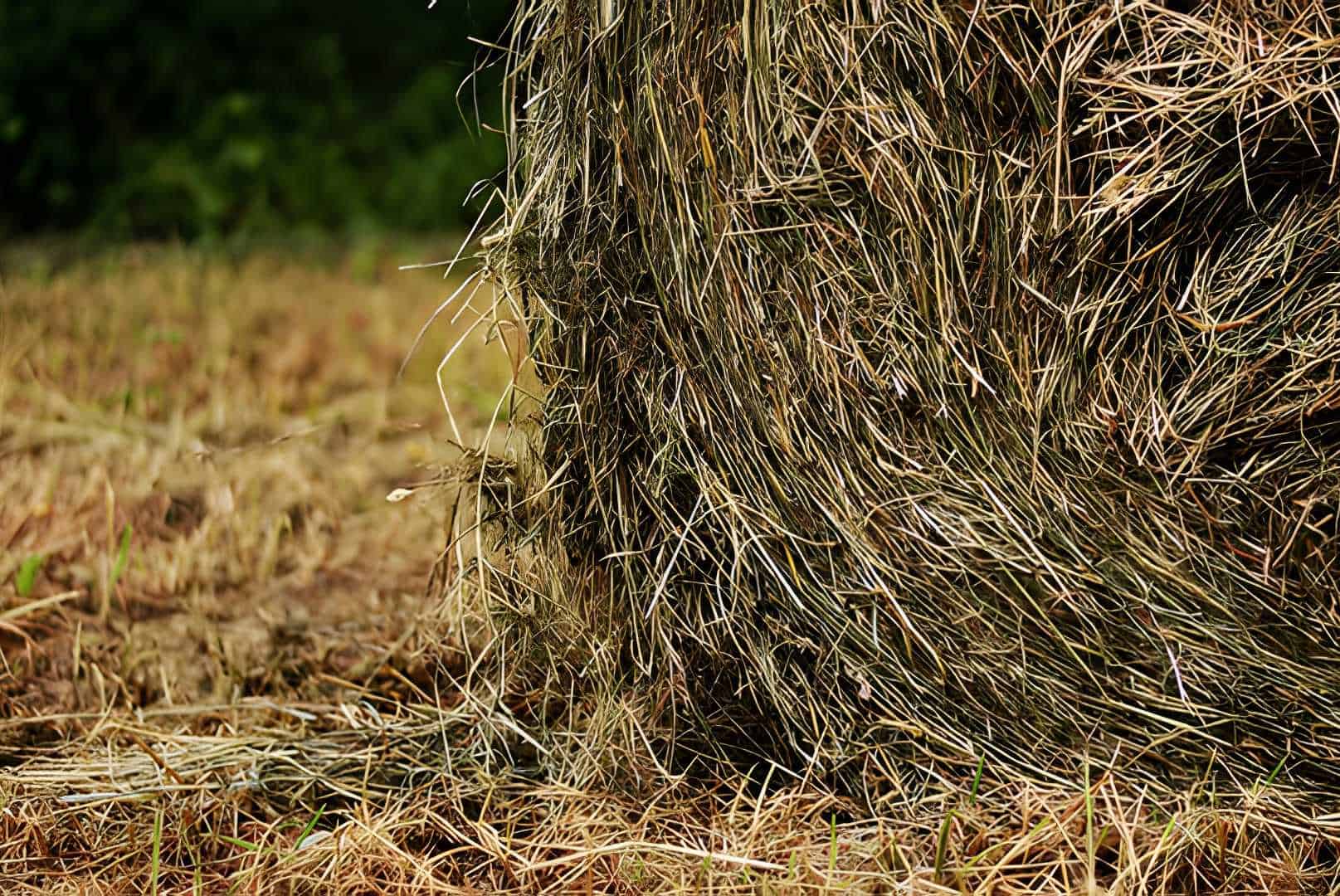 Bermudagrass hay is also a great contender as a substitute for timothy or meadow grass. It’s relatively high in fiber, a moderate amount of protein, and low in calcium. Nutrient-wise, bermudagrass hay is a good food source for rabbits.

It’s a hot season grass that multiplies rapidly during the summer season. Due to its rapid growth, it can also be very accessible, so you can even cultivate your own in the garden. Bermudagrass is also an all-rounder. It can be fed to baby kits and adult, mature rabbits.

One of the downsides is that bermudagrass can be lacking in taste. Since it has lower moisture and sugar, rabbits don’t indulge themselves consistently. This is especially true for picky rabbits and weaning kits.

You can remedy the lack of taste by mixing it with timothy, alfalfa, or orchard grass. Besides that, bermudagrass is an excellent source of vitamins and nutrients.

Why do Rabbits eat Hay?

Rabbits tend to eat fresh and uncut grass straight from the grounds in the wild. As they become domesticated, not all pet rabbits have access to fresh grass, and that’s where hay comes into the rabbit’s diet.

Hay is a mixture of cut and dried herbaceous plants such as grass and legumes. It’s commonly used as a food source for domesticated animals such as rabbits, horses, goats, and cattle. By drying the plant material, hay has a better shelf life and is less prone to invasive insects.

However, the advantages of hay can also become its downfall. Since hay goes through drying, it may lead to lower amounts of nutrients compared to fresh grass. With that said, hay can still provide a good amount of fiber to rabbits.

How to Find the Right Hay?

Now that you know the six best hay, you must learn which hay is the best one for you. Here are a few tips to understand how to find suitable fodder.

When choosing the right type of hay, be sure to know what it’s for. As you can read above, some hays are suitable as a supplement or a food source. Some are richer in fiber, while some have more vitamins and minerals.

Consider the Age of the Rabbit

Some hays are not an all-rounder. Various types such as alfalfa are better for kits under a year old, while orchard and oat are good supplemental hay for adult rabbits. When finding suitable hay, consider the age of the rabbits.

Most grazing animals, such as rabbits, can’t digest protein and calories compared to other minerals such as fiber. When feeding hay to adult rabbits, opt for low protein and low calcium variations.

However, a high amount of protein and calcium will help growing kits to gain weight and live a healthy adult life.

Finding the best hay for your rabbits is crucial for living a healthy and happy life. I hope this guide makes the selection process much easier for you.