Rabbit vs Hare – The Difference Between Rabbits and Hares

These fluffy creatures have been stars of many children’s stories, and for sure, you have come across them in books, movies, or even up close. But, what is the difference between a rabbit and a hare? We’ll get deeper into these questions and a lot more in this article.

The similar-looking rabbit and hare belong to one mammalian order, Lagomorpha, but they are different species.

Rabbits are subdivided into ten genera, including the popularly-known cottontails or the North American genus Sylvilagus. They are further classified into 30 species, including the Oryctolagus cuniculus or the domesticated European rabbit.

Meanwhile, hares fall under one genus called Lepus, classified into 30 species. People sometimes confuse the black-tailed jackrabbit or the Lepus californicus to belong to the rabbit family because of its name. 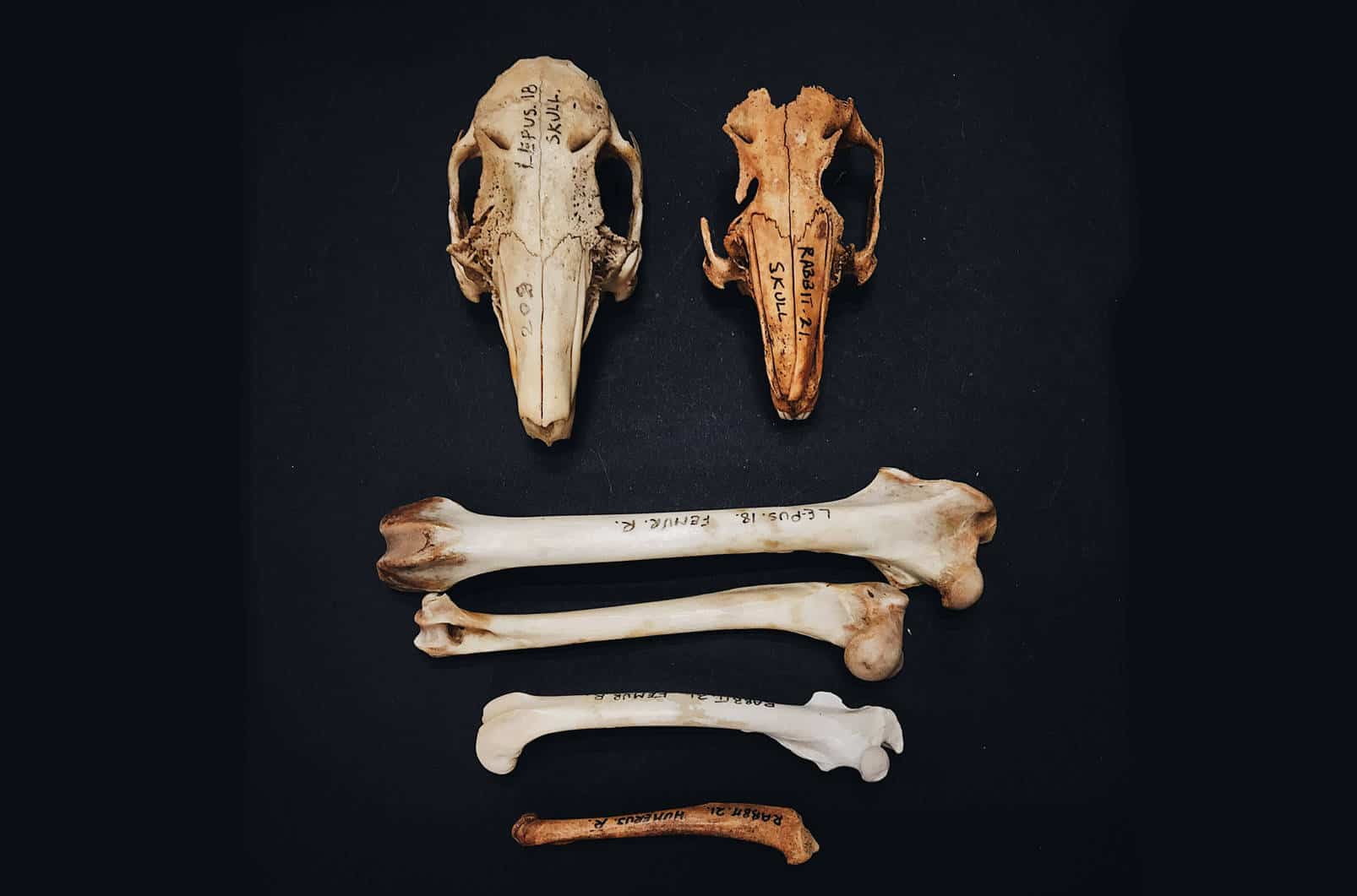 Except for giant rabbit breeds such as Flemish Giants, rabbits are generally smaller than hares. For example, an adult European rabbit with an average-sized breed usually weighs around 2.2 to 5.5 lbs. A fully-grown Arctic hare’s weight averages about 8.8 to 15.5 lbs.

A hare’s legs are thinner and longer than a rabbit’s, making it suitable for digging burrows and running at high speeds. Their ears are also longer, which allows them to hear predators so they can run away in case of imminent danger.

Hares have a sturdier and bigger bone structure than rabbits. Their bones, including their skulls, absorb more shock than rabbits. This anatomical feature protects their body, especially their brains, from injury while running and digging.

On the other hand, a rabbit’s bones are softer and more flexible, which allows them to fit into burrows and other tight spaces. [Rabbit Anatomy: Everything You Need To Know]

Now that you know that rabbits and hares are two different animals, it’s time to discover if bunnies belong to another species as well.

The term “bunny” has been used interchangeably with the word “rabbit” for many years. It is because a bunny and a rabbit refer to the same animal. Bunny is just a colloquial term that usually refers to a younger or smaller rabbit breed.

Calling a rabbit bunny emphasizes its cuteness, but it has no scientific significance. It is not listed as an official breed or species in the American Rabbit Breeders Association (ARBA).

Here’s a video that shows the difference between a rabbit and a hare.

Rabbit vs. Hare: Differences in Personalities and Temperament

No matter the size, rabbits and hares are generally docile and gentle. However, they’ll both attack and bite when threatened. Hares tend to get more nervous and edgier than rabbits. They run away at the first sign of danger and quickly withdraw from any human interaction.

The skittish behavior of hares prevents them from being ideal pets. Rabbits are more easily domesticated, and several breeds can be lovely companions to adults and children.

A hare is somewhat of a loner. It prefers to live in isolation and loves to spend time away from other animals. It takes pride in its independence and finds no reason to depend and cooperate with other hares. It can survive aboveground and protect itself from danger.

The only time a hare will relate with other hares is during mating season, wherein it will seek its pair. They also rarely fight with each other. It only happens when males are fighting over a female hare.

On the other hand, a rabbit’s life is the exact opposite. It thrives in underground family warrens and depends on the little groups they form for cooperation. The rabbits’ “society” operates on a hierarchy and the most dominant rabbit leads the colony.

Moreover, rabbits are very protective of their territory. Any outsider that will force its way into their burrow will be ferociously attacked.

There’s a stark difference in the ways rabbits and hares protect themselves from predators. Rabbits will hide from danger while hares will run from it.

Hares have adapted to living above ground by learning to run at meteoric speeds reaching 47 mph. They have no burrows where they can hide, so running away is their only defense.

Rabbits can still run away but not as fast as hares. However, they make up for their lack of speed with their ability to hide from their enemies. They will find a way to reach their burrows as creatively as possible before the predator gets to them.

Rabbits vs. Hares: Differences in their Reproduction 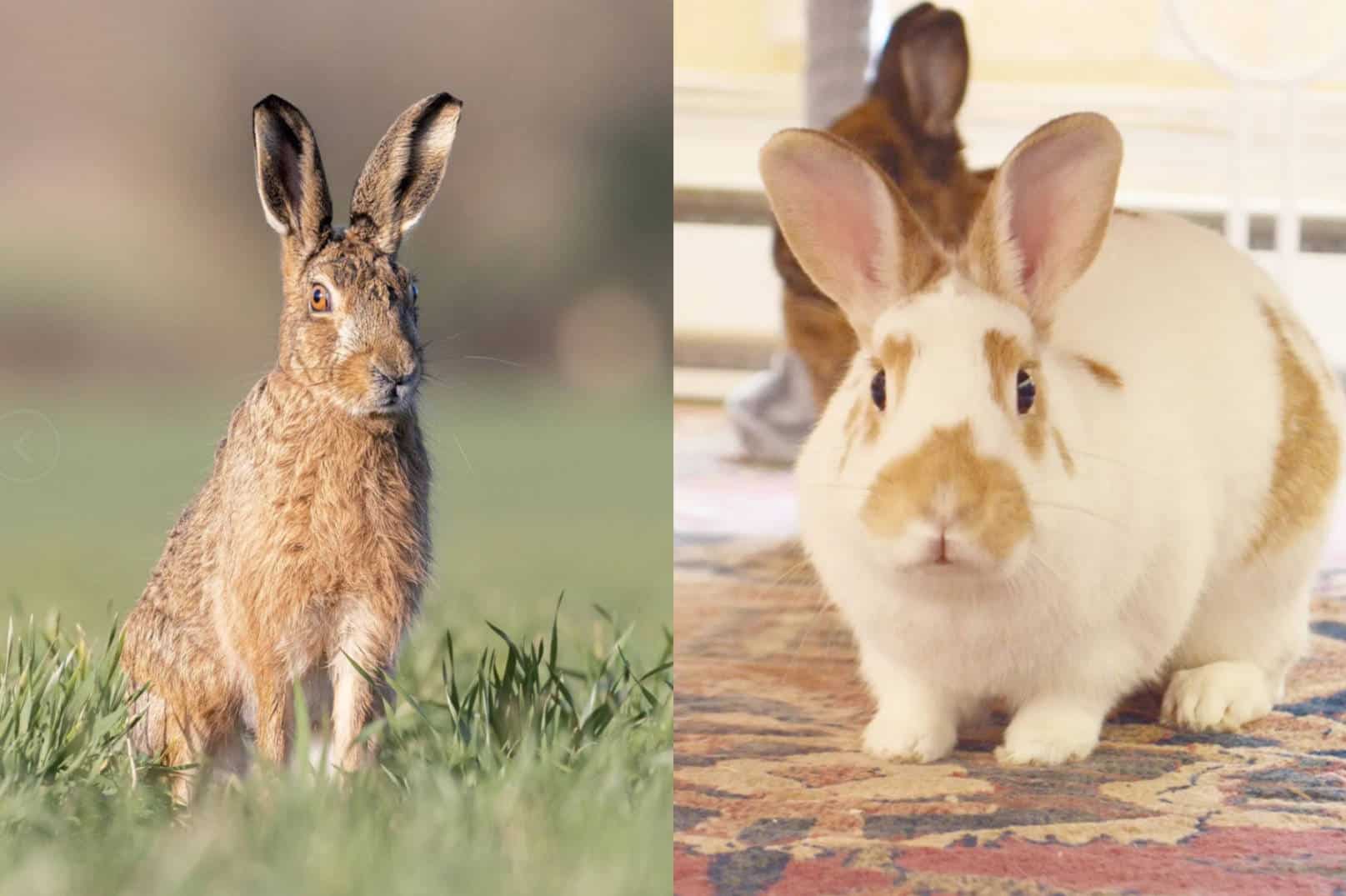 Here’s a quick guide to the terminologies for males and females to help you understand their mating patterns.

Mating rabbits is quick and more straightforward than the hares’ procreation methods. A buck will straddle a doe using its forelegs and restrain it by biting its neck. There isn’t much resistance from the female, and the process will be over after a few minutes.

On the other hand, hares tend to be fussier. A jill will fight her way out of a jack’s advances by standing on her hind legs and punching him.

The female will still give the male a hard time even if she’s interested in him. Their mating ritual involves the males chasing the female for many miles before procreating.

Rabbits and hares are prolific animals. However, breeding is off-limits from December to February. They become impulsive and excited when March arrives, which only means that breeding season has begun.

A rabbit’s gestation lasts for 30 days. Their litter size can range from four to 12 kits. Meanwhile, hares gestate for 45 days, and they can’t give birth to more than six leverets per pregnancy.

Mother hares give birth to furry babies whose eyes are already open. These leverets can survive in the wild even after a few days of being born. Since they have no burrows to protect them from predators, they learn to fend for themselves early.

Rabbit babies are the exact opposite- they come out of their mother’s womb all helpless, tiny, and without fur. It will also take a few weeks before they can see, hear, and survive by themselves.

Here’s a table to summarize a hare and rabbit’s reproductive behavior.

This video will show you what baby bunnies look like.

Rabbit vs. Hare: The Differences in their Basic Needs

Rabbits are usually interested in eating softer produce like grass, leafy greens, and other vegetables and fruits with soft stems.

On the other hand, hares are more drawn to food found in the woods. They prefer to munch on hard food such as barks, roots, and stems of plants.

Both animals may prefer different food to feast on, but they both need to drink enough water. On average, they consume 150 ml of water every day. 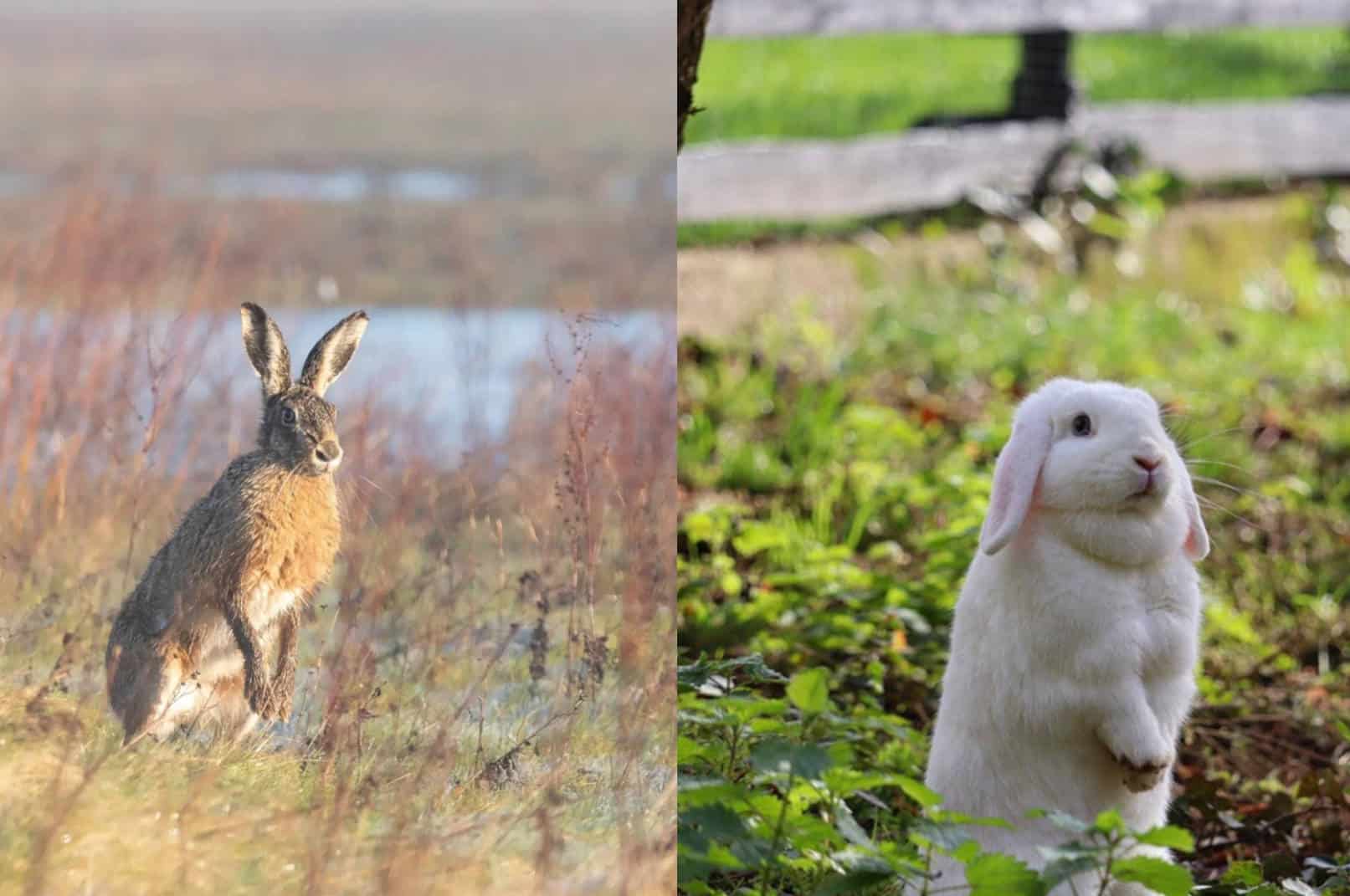 Hares are known to dwell on the ground as opposed to rabbits who will burrow beneath the soil. These surface dwellers will seek refuge in bushes or shallow holes in the forest.

Rabbits live for digging, and they’d create networks of burrows and warrens. Compared to their distant relative, the hare, they have more protection from the underground.

The cottontail rabbit is an exception, though. It will dwell and look for food in fields and have the same “dangerous” life as the hare. 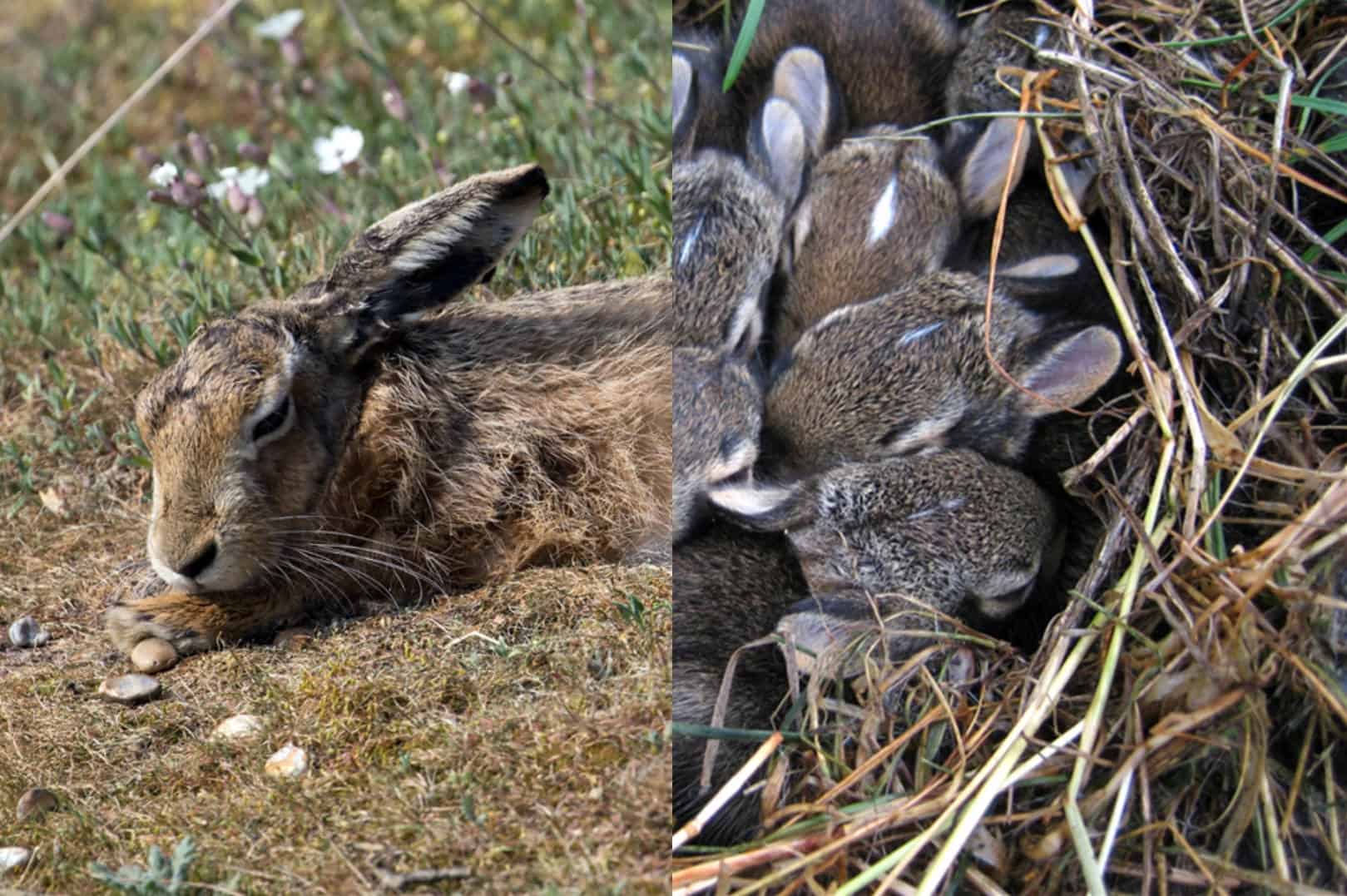 Rabbits are crepuscular creatures, meaning they are the most active during twilight. They usually come out of their burrows late in the afternoon to forage for food and return to their home when the night gets cold.

They’d sleep upon returning from their adventure and nap again during the day.

Hares, on the other hand, are nocturnal animals. They’d wait until it gets dark to look for food and eat. They’ll sleep when the sun comes out, making them vulnerable to more active animals.

To prevent any threat to their safety, they’d usually blend into their environment by burying themselves in dried leaves or dirt or by sleeping in thick bushes.

Adaptability to their Environment

After every season, a hare’s coat undergoes a stark color change to adapt to its environment. It uses its coat as camouflage that makes it invisible to predators. It turns snowy white during winter and grayish-brown during warmer months.

On the other hand, a rabbit’s fur may adopt a grayish tinge during cold months, but the contrast of color isn’t as noticeable as the hare’s fur.

These two animals have confused many people since they look the same, but the similarities end there. So, what is the difference between a rabbit and a hare?

They’re different in their behavior, reproductive cycles, offspring, and survival tactics, but they’re interesting animals, all the same.