Rabbits are skittish. When rabbits sense a threat nearby, they will do anything to avoid any potentially dangerous situation. That’s when they play dead.

It is bizarre that rabbits have this instinctive behavior when other animals are trained to learn this trick. When rabbits play dead, they lie motionless on the ground, refuse to respond to stimuli, and let out slow and shallow breaths.

Let’s know why rabbits do this.

Rabbits are intelligently wise animals. You cannot underestimate the reasons why they play dead. 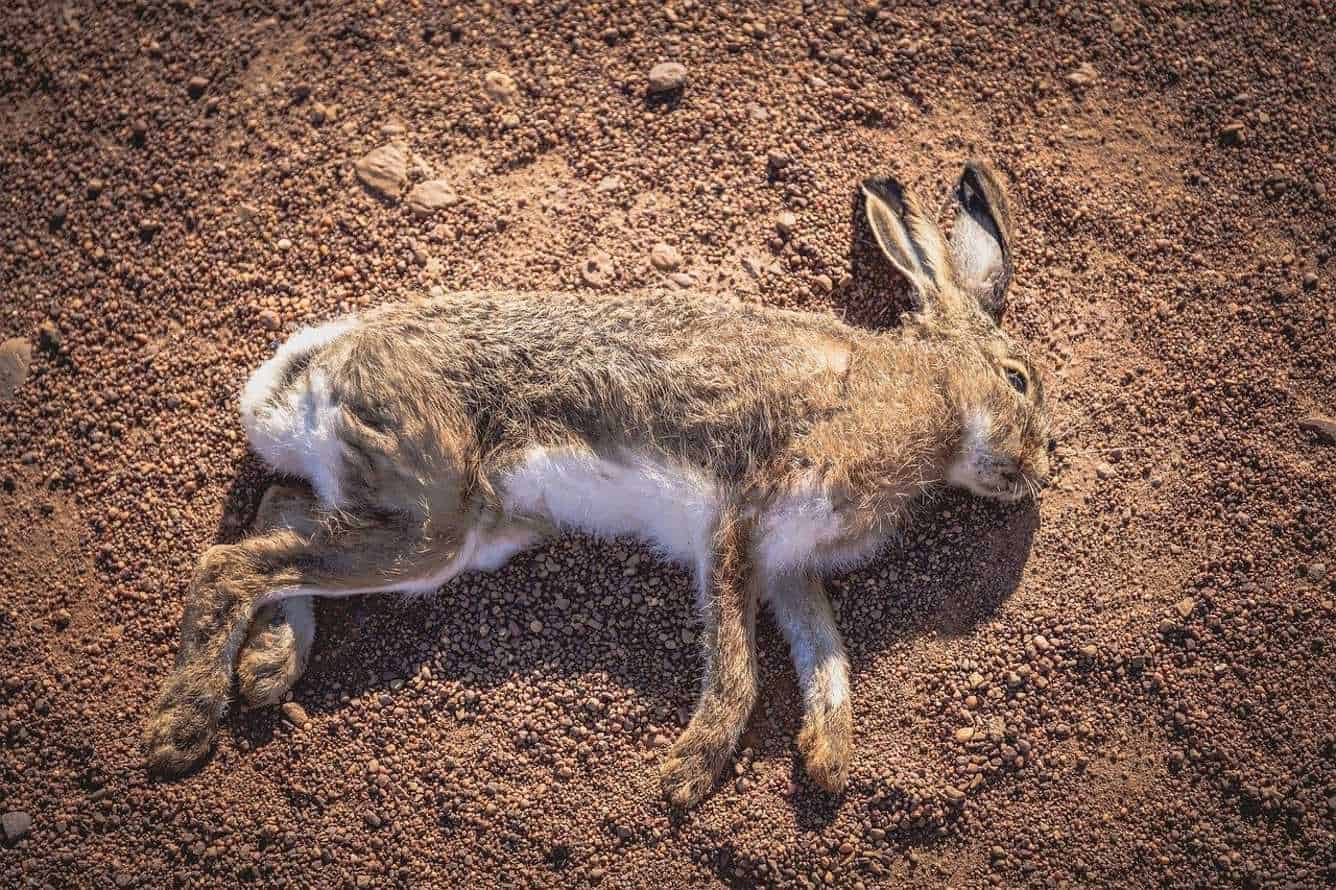 Playing dead is not the best and most effective defense mechanism in the wild, and rabbits know it makes them an easy target. Rabbits have a fight-or-flight instinct. If they are in a tight position, rabbits fight back.

But, their long-distance vision helps them recognize their predators nearby, making them escape. Rabbits can confidently outrun their predators with an average speed of 30mph. That’s why rabbits most likely run than play dead.

However, in desperate situations, rabbits play dead and hope the predators will not come near and just pass by them. This is dangerous because most predators are scavengers and do not think twice about eating a dead rabbit.

Strangely, rabbits drop on the ground and play dead after running around. This is a strange behavior of rabbits that leaves first-time owners frightened.

It is startling to see your rabbit running around and suddenly dropping to the ground, looking lifeless. Your rabbit may have sensed a predator nearby or has been exhausted from playing.

Passing out from exhaustion and falling asleep on the spot is common in younger rabbits. This behavior is called flopping. You might panic, thinking it is a heart attack. Do not wake up your rabbit. Instead, carry it to their cage and let them have the sleep they need.

In a few hours, your rabbit becomes active again.

Rabbits Play Dead to Get Attention 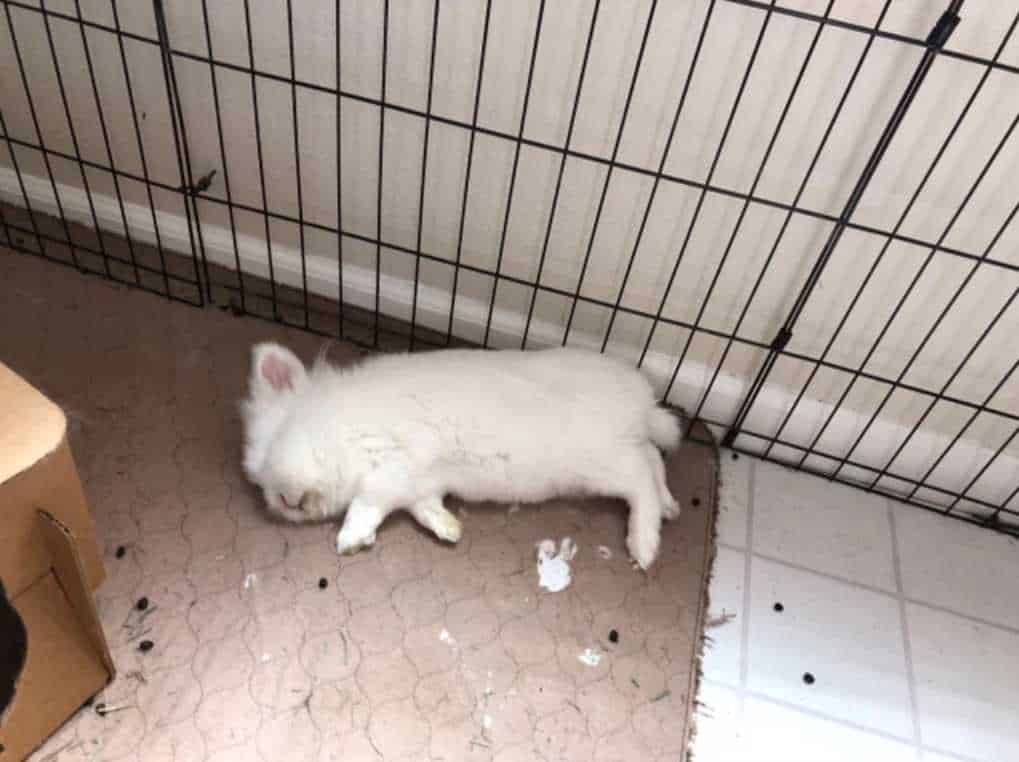 Apart from the known reason of self-defense, rabbits play dead to seek attention from their owners. Rabbits may be sometimes stubborn and self-centered. So when rabbits feel lonely and neglected, they start biting or chewing things, pulling clothes, or playing dead.

You can prevent your rabbit from displaying excessive behaviors by giving them adequate attention or a companion. A couple of minutes for playtime and cuddles each day maintains their health and strengthens your bond.

Meanwhile, finding your rabbit a companion is not a problem; two rabbits can live together.

Neglecting this behavior results in too much sadness or depression in rabbits.

How to Give Attention to Rabbits Properly

Rabbits rely on their owners, even for entertainment. It is essential to provide rabbits with enough stimulation from their environment to avoid boredom and frustration, leading them to seek attention. 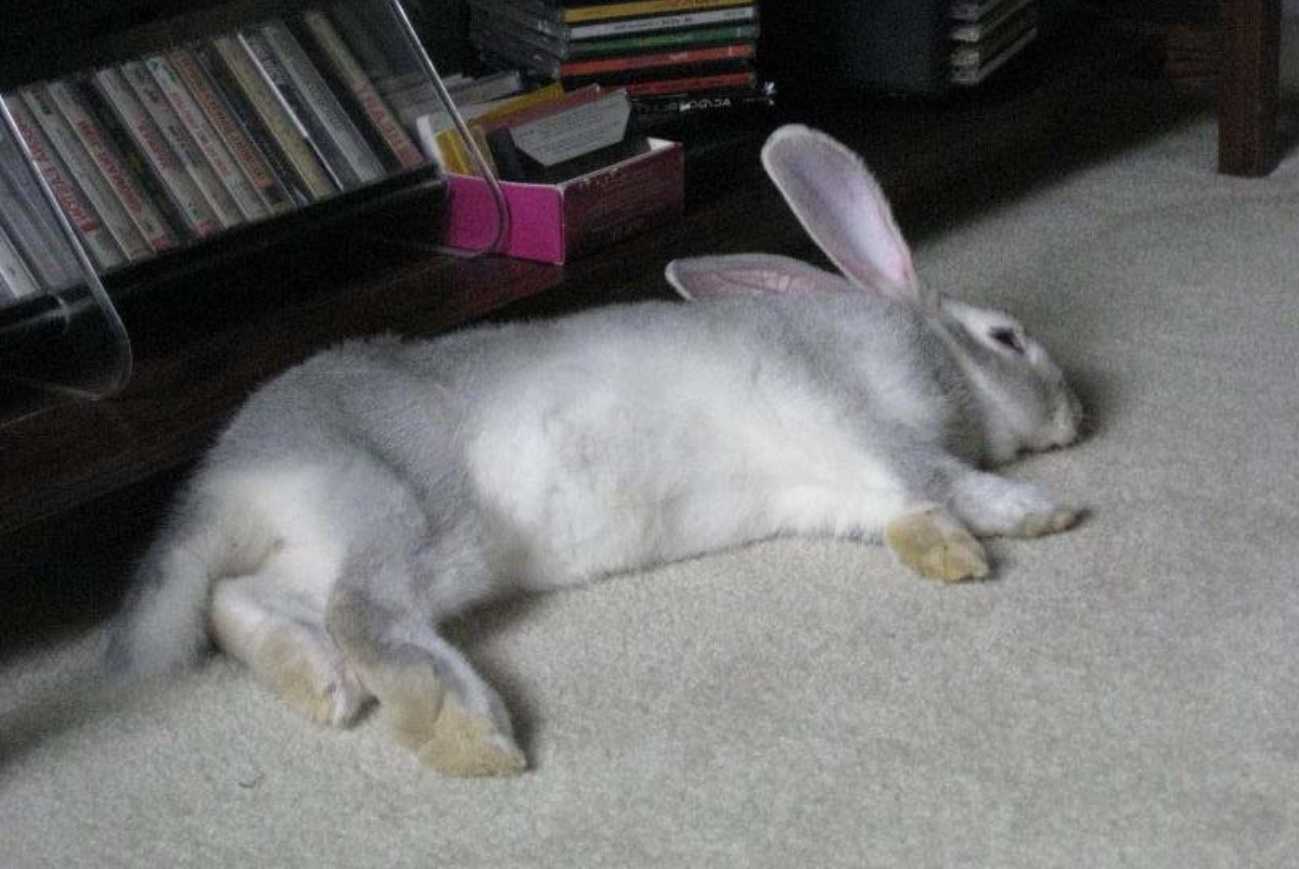 Rabbits are well-aware that playing dead is not an effective self-defense, but rabbits are easily startled and frightened, making them do this last line of defense more often. Everyday situations that cause them to play dead are:

Basically, rabbits can be easily scared by loud noises. If the noise does not subside, it leads to more stress on the rabbit, making them play dead for a few minutes.

It may be frightening for the owners to witness their rabbit not flinching a muscle, but understand this is their natural reaction when frightened.

As rabbits are easily frightened, improper handling makes them startled. Rabbits are comfortable having all of their paws on the ground. When you pick them up from the ground, they get startled and uncomfortable with the situation, resulting in them playing dead.

You will notice how the rabbits get stiff upon picking them up. Once you put them down, they will most likely flee away from you. Do not try to hold or touch them after mishandling them.

It will scare them more. Instead, give them some time, refrain from any active involvement, and observe them in silence.

How to Properly Lift Rabbits

If you want to lift your rabbit, do it properly to avoid them playing dead. Place a hand under the rabbit’s chest, while the other under its bottom. Hold and draw them closer to you. It prevents falls and makes them feel secure.

How Long Can Rabbits Play Dead? 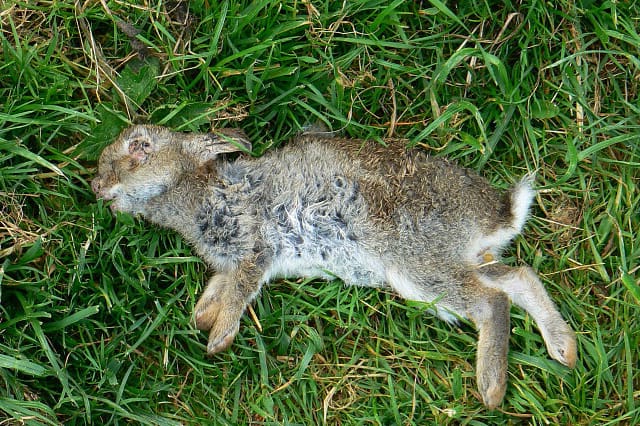 You might have noticed other pets play dead for tricks and treats. But this is a different case for rabbits.

At an early age, rabbits learn this self-defense trick from their mothers. Baby rabbits are easily frightened by loud noises and other pets. You need to deal with a baby rabbit playing dead differently. Be cautious as it might be having some other issues.

Rabbits can play dead for a few seconds to ten minutes. When this happens, create a safe and favorable environment for the rabbit. Patiently wait for your rabbit to feel safe and secure. Do not force them to get up and play with you.

Rabbits become stiff and still when they play dead. It is frightening and worrisome for rabbit owners who think their rabbits may be hurting when doing this trick. Playing dead does not hurt rabbits, especially when it is their defense mechanism.

Rabbits are aware of what they are doing. They are in complete control of the situation and have calculated this action in advance. Instead of worrying when your rabbit is playing dead, look for the cause and help alleviate their stress.

Understand what’s going on around them. If there are no loud noises or actual predators, your rabbit is playing dead to get your attention.

If your rabbit is playing dead constantly, it is time to reassess the environment around them and remove the possible stressors. 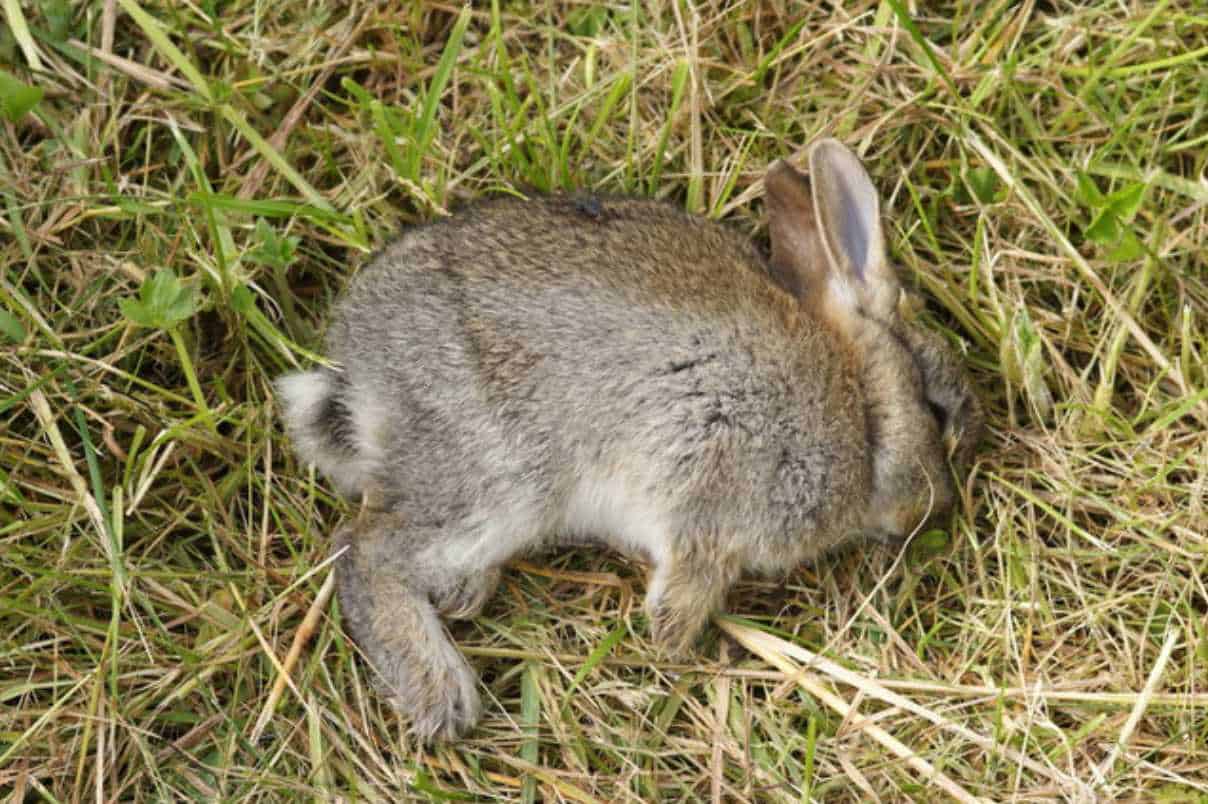 Often you might notice your rabbit is sleeping with its eyes open, and they enjoy paradoxical sleep. But when rabbits feel relaxed or tired, they tend to close their eyes, lay on their back, and raise their legs in the air; this sleeping position is similar to when they are playing dead.

So, how can you distinguish whether your rabbit is playing dead or sleeping? Through the sound and movement rabbits do.

When rabbits are purring, twitching, and jerking when lying, they are fully contented and relaxed in their sleep. However, if the rabbit is playing dead, you will not hear any clicking of its teeth, and it remains still like a statue. This is because playing dead is a conscious act.

Do Not Force Play Dead Position on Rabbits

It is undeniable how rabbits are cute when they lie on their backs and play dead. Although this position appears relaxing and hypnotizing for the rabbit, it is not safe for them to be forced into this position.

Forcing rabbits to lie flat and play dead is harmful, especially for babies and old rabbits. This method is called trancing. Trancing makes the rabbit’s heart rate skyrocket, the unbearable increase in their heart rate leads to a possible heart attack.

However, trancing is done when checking rabbits for injuries. This is only the last resort. You can only do this with an adult bunny and in the quickest way possible.

How to Properly Trance Rabbit

If there is a need to trance your rabbit, here are the steps to do it properly:

Trancing rabbits may give them trauma. Do not forget to shower them with treats and affection after putting them in this position.

It is frightening to find your pet rabbit helpless and lying lifeless, especially for first-time rabbit owners. But, you have to keep yourself relaxed and composed.

It is typical behavior of rabbits to play dead. Ensure that you know how to recognize when your rabbit is playing dead or comfortably sleeping.