Do Rabbits Mate for Life? The Answer and So Much More!

You might have heard that these furry friends of ours mate for life. Now, you might be wondering how true that is. You do not have to worry! We can help you with this question.

So, do rabbits mate for life? Well, hop on, and let us answer this question. Let us go!

Do Rabbits Mate for Life?

The answer to this question is pretty straightforward. However, people could mean one of two things when they ask this question. Now, that is what complicates things as they have different answers.

Not to worry, though. We will be answering both questions! After that, we will also be tackling the other important things connected with these concerns.

Do Rabbits Breed for Life? 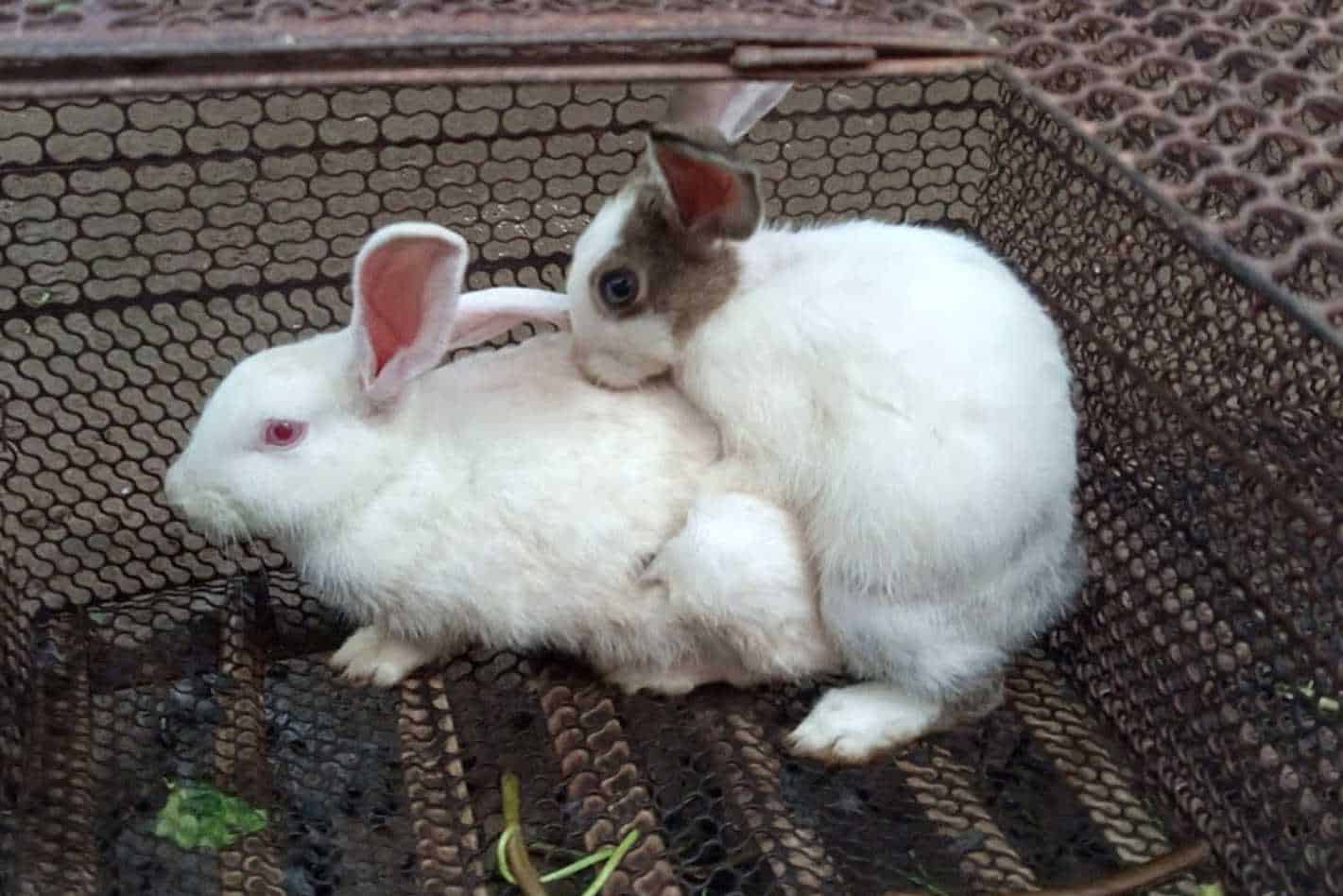 If you mean to ask if rabbits breed throughout their lives, the general answer is yes. You could say rabbits are good at breeding. For one, they can reach sexual maturity as early as twelve weeks. Additionally, their gestation period only lasts around five weeks.

They could also give to more than fourteen live youngs and get pregnant again only after a few days. Still, that is not all! Unlike other animals, they can mate all year round.

Also, as we have said above, they could breed for life. Rabbits could have seven litters a year, and on average, they could live up to nine years. Can you imagine how many baby rabbits that is?

Rabbits could breed for life, but that does not always happen. For one, disease and illnesses could prevent a rabbit from doing so. On the other hand, not finding a willing mate could be another.

Later, when we talk about our furry friends at home, you will see another common reason that stops rabbits from breeding for life. 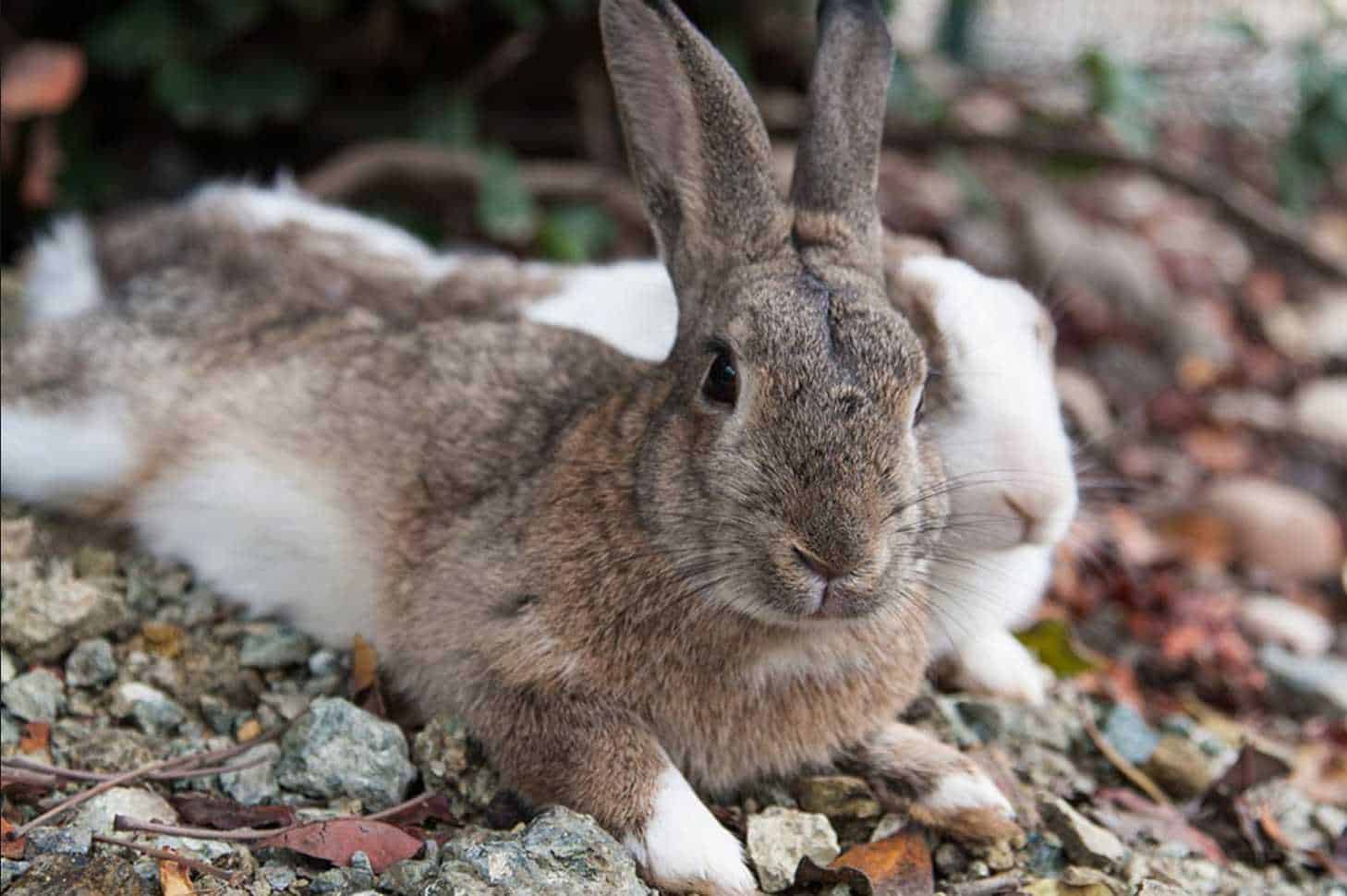 If you mean to ask if rabbits stay and breed with a single partner throughout their lives, the general answer is no. Rabbits are not generally monogamous.

They do not get attached to their mate like humans. They can get bonded, but not in this way. If you are curious, don’t worry. We will talk more on this topic later.

Once the mating process is over, the buck and doe are often known to go on different paths. The doe would care for the live youngs while the male rabbit has no role in raising the kittens.

Later on, in their bunny lives, the kits could also become mates of their parents. It may not be the best picture of our cute and cuddly friends, but that is how it goes in the wild.

Being preys, they need to spread their genes and make sure their species survives. Don’t judge our little guys and gals. It’s hard to be a rabbit out there!

Rabbits are generally polyamorous, but they can also be monogamous. For example, if there is no other rabbit around, they might mate with a rabbit they have previously been with already. We will talk more about this topic in the next portion. 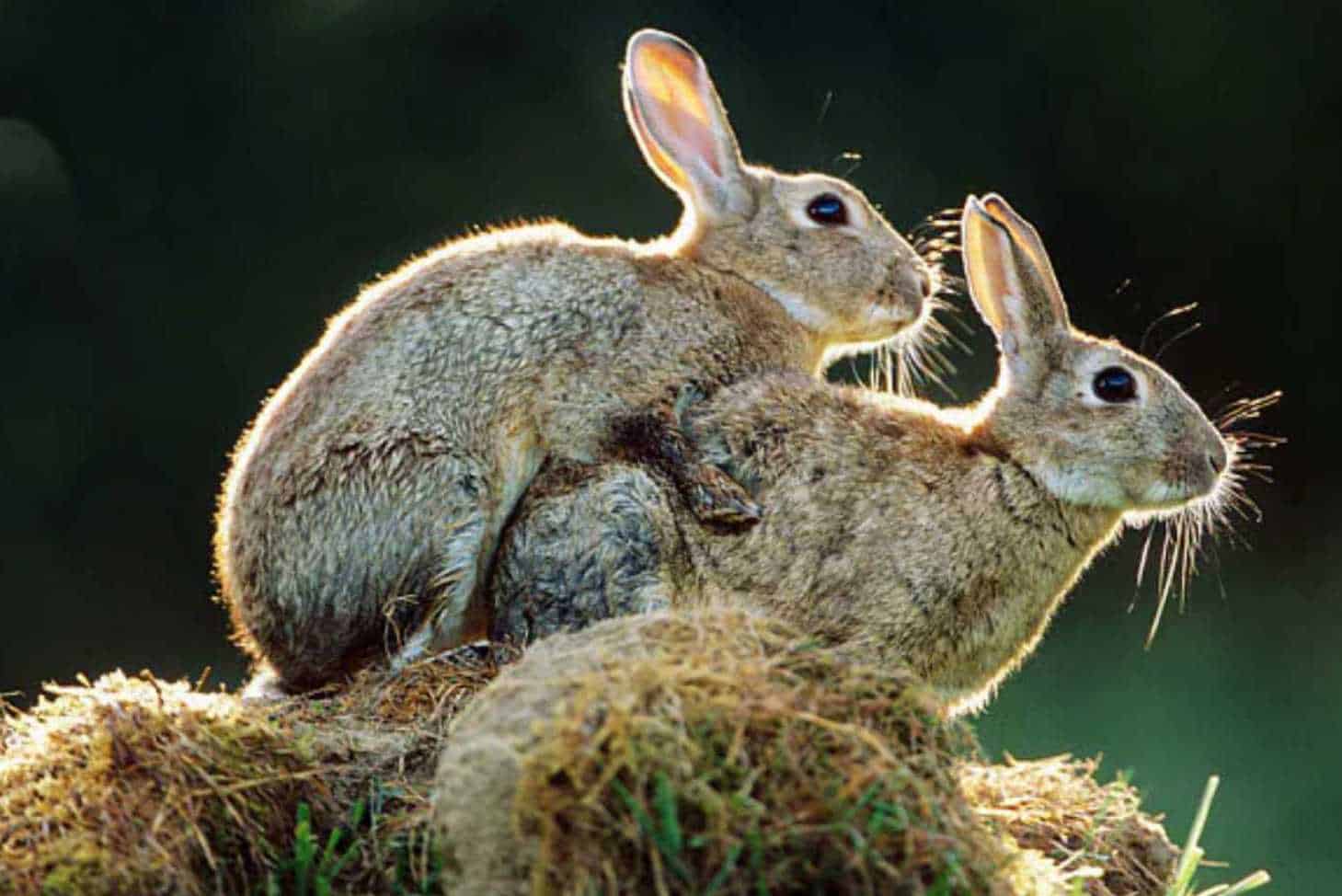 Now, you might be wondering if the same is true for domesticated rabbits. Well, the answer is not that straightforward. While the instinct is generally in all rabbits, our furry friends at home are under different circumstances.

For one, it is common practice to neuter a pet rabbit. It helps protect our little guys and gals. Additionally, it can also help with their undesirable behaviors.

Also, as you might already know, rabbits are prolific at breeding. If you do not spay your pair, you would most likely end up with more rabbits than you can handle.

So, while the instinct is generally present in all rabbits, you can see why we can’t immediately say our little furry friends at home will breed for life. As you might expect, they would most likely not, in this setting.

On the other hand, pet rabbits are often monogamous.

As you might already know, rabbits are social creatures, and they need companionship. Getting a pair of rabbits is ideal when taking these furry creatures home.

As you can already imagine, our furry friends at home do not have much choice but to be monogamous. Of course, it could still change depending on if you decide to spay them or get a same-gender pair.

If you determine to get more than two rabbits and not neuter them, their options would still be limited. Still, they would be less likely to favor one over the other rabbits when there are options. 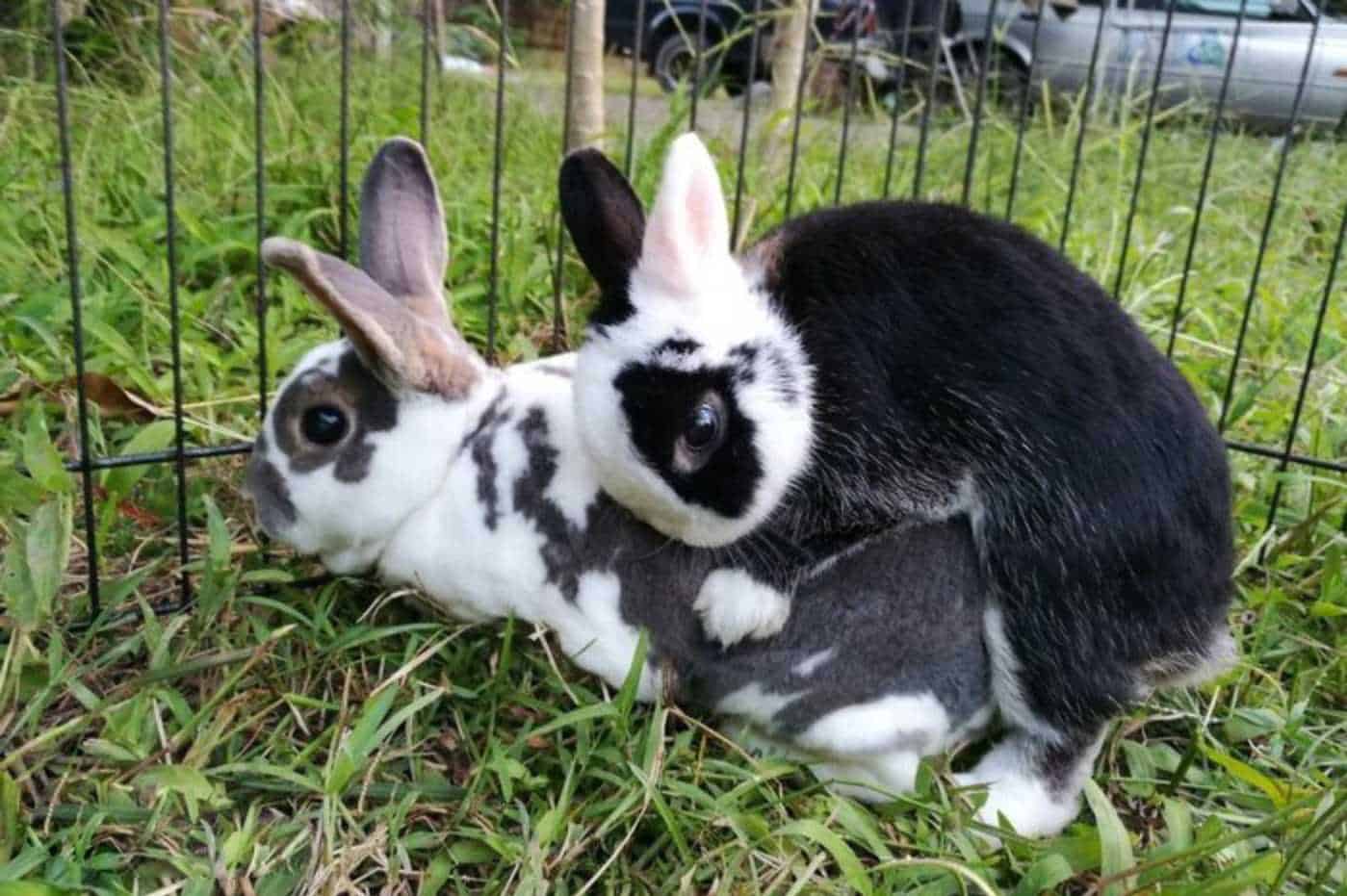 Neutering is one of the reasons a pet rabbit will not breed for life. Let’s briefly talk about it, as there are some things you want to keep in mind when it comes to mating and neutering.

If you have a pair of rabbits, you want to neuter them both. If not, you will end up with stressed-out rabbits. Additionally, if they don’t have a bond yet, they will likely not bond at all.

The rabbit that is still intact will keep on trying to mate with the one that has been spayed. As you can see, one would be inclined to mate while the other one won’t be. Since they are not on the same ground, they will get stressed with each other.

On the other hand, you still don’t want to put your two newly spayed rabbits together immediately after the process. It might take a few weeks before they both become sterile.

During this time, they might get spikes and still exhibit some of their sexual tendencies, which might even be more intense than before the process! It is alright, though, so you don’t have to worry about this. It will eventually stop.

Finally, even if you decide to get a same-gender pair, you want to spay them. Breeding might not be a problem for a same-gender duo, but as we’ve said, neutering does not only help with this problem.

Spaying will also help keep your rabbits safe and keep their undesirable behaviors in check.

Do Rabbits Bond for Life? 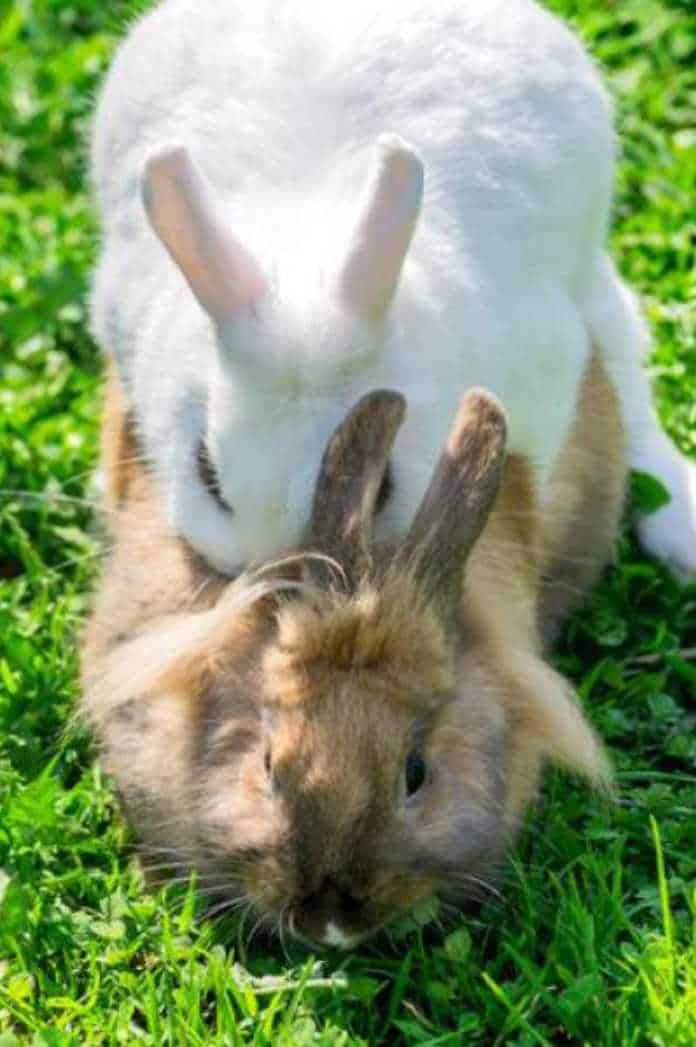 Are bonded pairs the same as rabbit mates? Well, let us talk about bonded rabbits then.

Right now, you might be confused. You might have heard the many touching stories of loyal rabbits mourning the death of their partner, and you might think some of the things we told you above don’t seem to align with that. Does that mean those stories are not true?

Those stories are most probably true, and that’s where the bonding process comes in. As we have said above, rabbits are social creatures, and that is why it is advisable to get a pair.

You could only get away with having a single rabbit if you can give it the love and attention a bunny friend would.

Whereas a rabbit might not be loyal to its mate, a rabbit is faithful to another rabbit it has bonded with. In some cases, though, a rabbit’s mate might also be its bonded pair. If it is pet rabbits we are talking about, it is not an unusual case.

To answer the question, though, yes, rabbits bond for life. If one of the pair dies, the other one could get depressed.

Rabbits experiencing the loss of their pair could end up being aggressive toward their owner or beg their humans for love. Each rabbit is different. Their expression of loss could vary.

On the other hand, you will most likely not see the exact reaction to the death of one of the many mates a rabbit had.

Finally, let’s tie it all up with this question.

A rabbit is not loyal to its mate per se. It will mate with the nearest rabbit of the opposite gender. Often, never to show any favor for a single rabbit. After mating, the buck and the doe often separate without forming any bond.

On the other hand, once a rabbit has bonded with another rabbit, they will stay loyal to one another.

Not enough to only mate with each other if there are other rabbits, but the two will be mentally and emotionally faithful to one another. However, if one dies, it is possible to bond the other rabbit with a new friend.

Do rabbits mate for life?

Rabbits breed for life. However, they do not strictly mate with the same rabbit for life. Any rabbit from the opposite gender would generally do.

If it is domesticated rabbits we are talking about, we have to consider their environment before answering this question. Also, we talked about bonded pairs and how it differs from mates. Finally, we discussed rabbits and their loyalty to their mates and partners.

Did we answer your concern? If so, you might want to hop on to our other buzzing bunny talks. We might have the answer or the thing you and your little furry friend need!