Have you ever wondered about the relationship between the Chinchilla and Chinchilla Rabbit?

Although they are genetically unrelated, there is a close connection between the two! Let’s go down and trace history. Here, we’ve provided everything you need to know about the Chinchilla Rabbit.

On this page, you’ll learn the history, breed standard, health issues, care tips, and other interesting facts about this gentle and soft rabbit. Who knows, the Chinchilla Rabbit might be the one to complete your home! 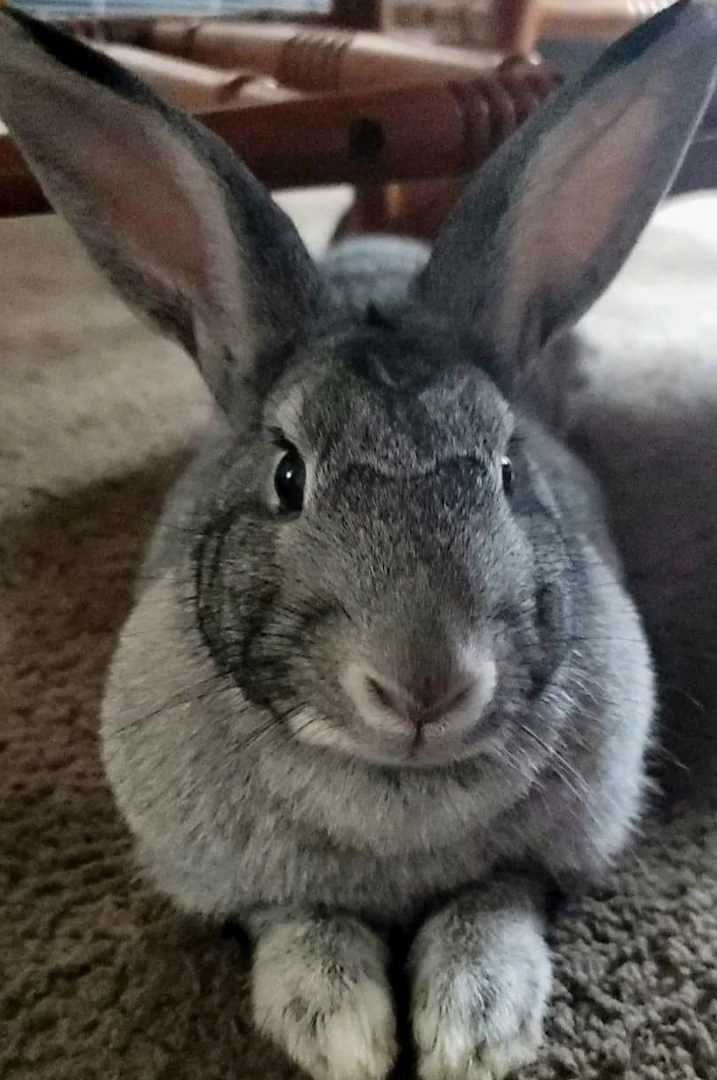 Chinchillas are rodents with large eyes, velvety rounded ears, and grayish fur. They’ve been around for over 41 million years!

These animals are the first to infest South America, and soon, their coats became popular in the European clothing industry during the 1700s.

In the 1900s, Chinchillas were hunted down, causing the near extinction of the breed. Due to this, a rabbit breeder from France thought of producing an identical rabbit like the South American Chinchillas.

3 Breeds of the Chinchilla Rabbit 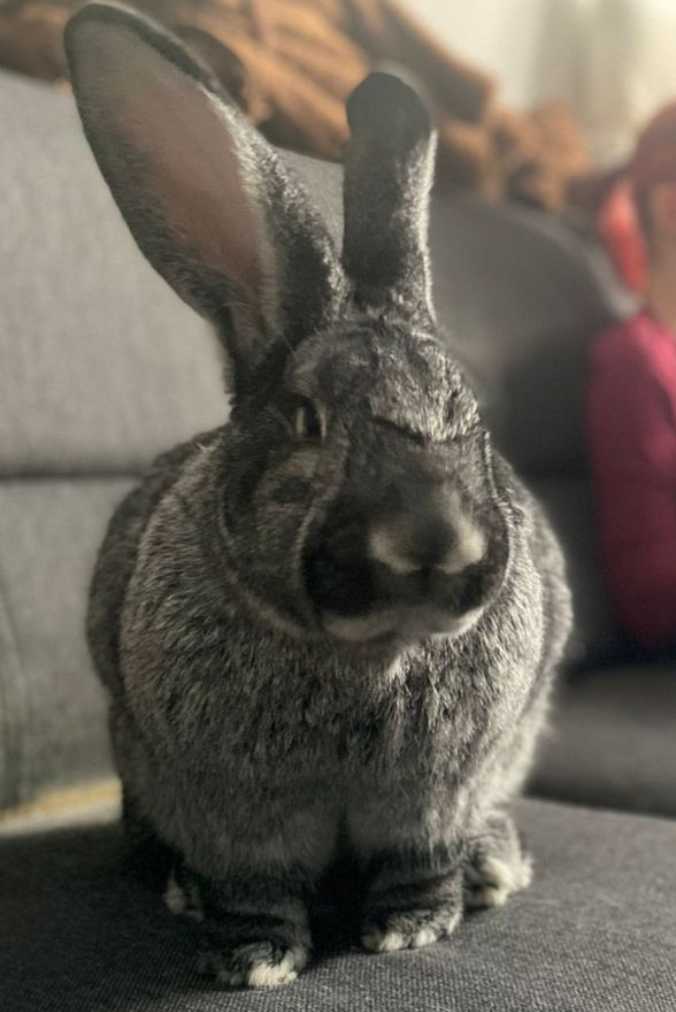 There are 3 recognized breeds of the Chinchilla Rabbit, as approved by the American Rabbit Breeders Association (ARBA): The Standard Chinchilla, American Chinchilla, and Giant Chinchilla.

It is said that one breed was derived from the other. Hence, although the breeds are quite different when it comes to size, they still have a fair share of similarities.

Standard Chinchillas were believed to be the result of the combination of Beverens and Himalayans. The breed was created in 1919 in France.

Standard Chinchilla Rabbits weigh around 5.5 to 7 pounds, which is around 2.5 to 3.2 kilograms. Therefore, they are the smallest of all three types of Chinchilla Rabbits. They have a plump, compact body and silky fur.

Sadly, even though American Chinchilla Rabbits are famous house pets, they are under American Livestock Breeds Conservancy’s “critically endangered” list. 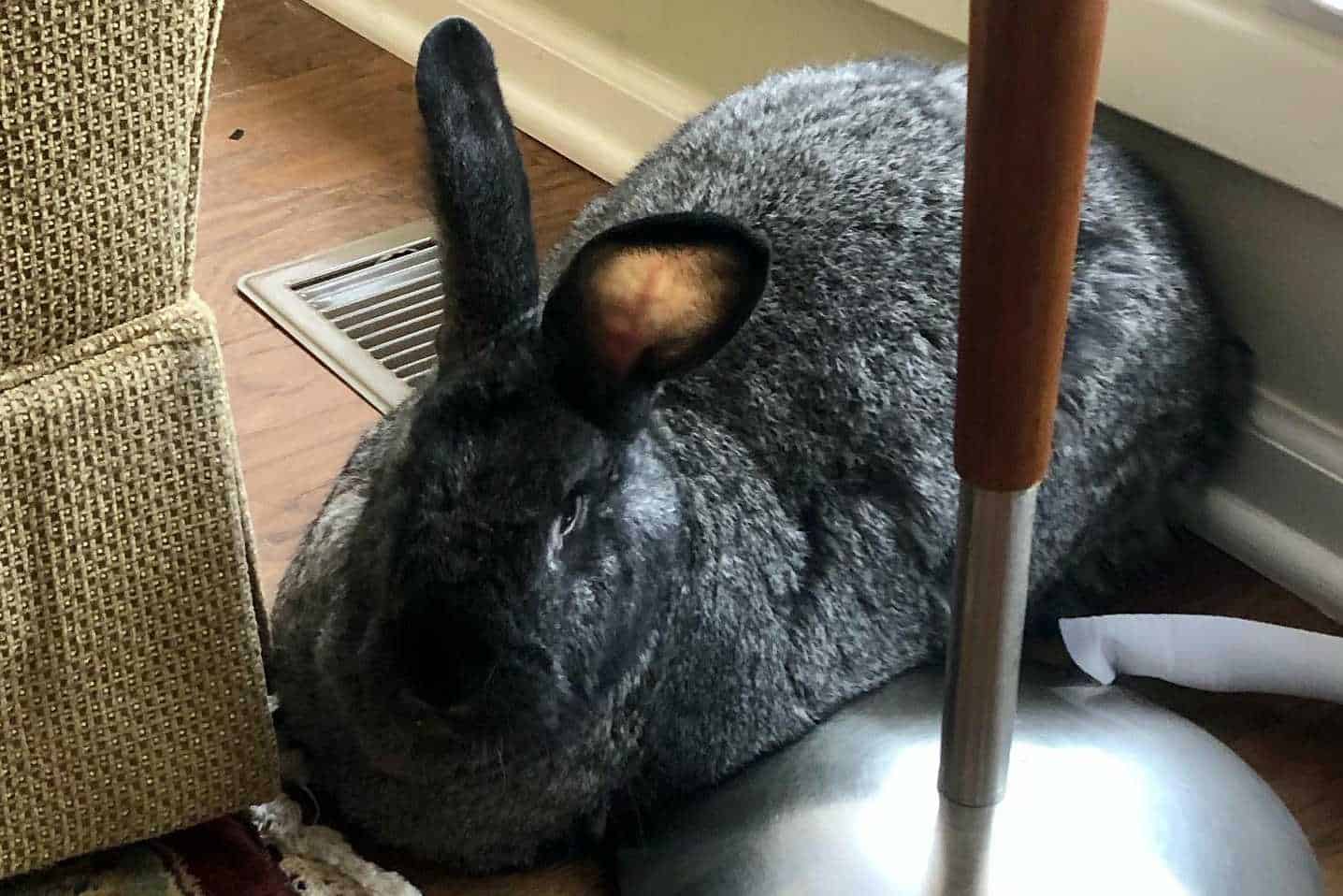 Chinchilla Rabbits are medium-sized rabbits with short necksstandard chinchilla rabbit, broad heads. What stands out are erect ears and silky coats. These rabbits have agouti hair, meaning, they have different bands of fur colors along with their length.

You can spot a Chinchilla Rabbit by its color. Chinchilla Rabbits typically have blended earth colors. These include brown, chestnut, and tan with bands of white, blue, and black. They have a dark slate blue under color at the base with a few light gray streaks in between.

Chinchilla Rabbits have brown, blue-gray, or marbled eyes. Most breeders prefer a dark brown eye color for this breed.

Chinchilla Rabbits have a great lifespan of approximately 5 to 10 years, but they can live longer depending on the care and health status.

Chinchillas’ lifespan of 5 to 10 years is perfect. It’s not too short to build a bond. Also, it’s not too long for kids to have a hard time moving on when they eventually have to bid their goodbyes. 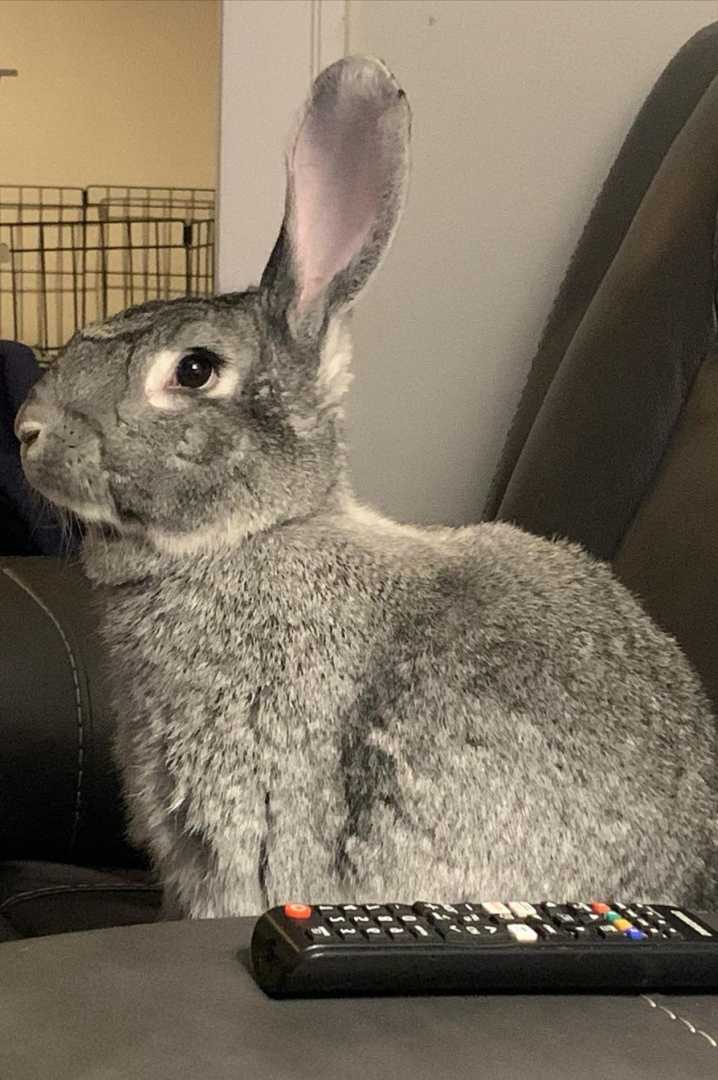 Owners love Chinchilla Rabbits because of their fantastic personalities and temperament. Chinchilla Rabbits are said to be docile, gentle, and friendly rabbits. They are good-natured rabbits perfect for families with children and seniors.

Chinchilla Rabbits are playful and sociable. Hence, they love to seek attention. For this reason, they will most likely hop and play in front of you to catch your attention!

They like human interaction, so if you’re looking for a lovely and clingy pet, Chinchilla Rabbits are perfect for you.

Through repetition and practice, your Chinchilla Rabbit can perform tasks and tricks perfectly. They can follow your commands as well.

As for their memory, Chinchillas remember where their food bowls and water bottles are, and they can understand the layout of their cage quickly. This means that Chinchillas can have a good grasp of their environment, making them navigate around their cage easily.

A Chinchilla Rabbit is also described to be fast and agile. These highly energetic animals are sure to jump, run around your room, and enjoy their favorite rabbit toys. Give them a good toy to play with to keep their minds and body active.

There are no specific health illnesses for Chinchilla Rabbits. However, they can contract illnesses the same as other rabbits. Like any other breed, Chinchilla Rabbits are prone to health issues concerning their dental health, gastrointestinal system, and respiration. 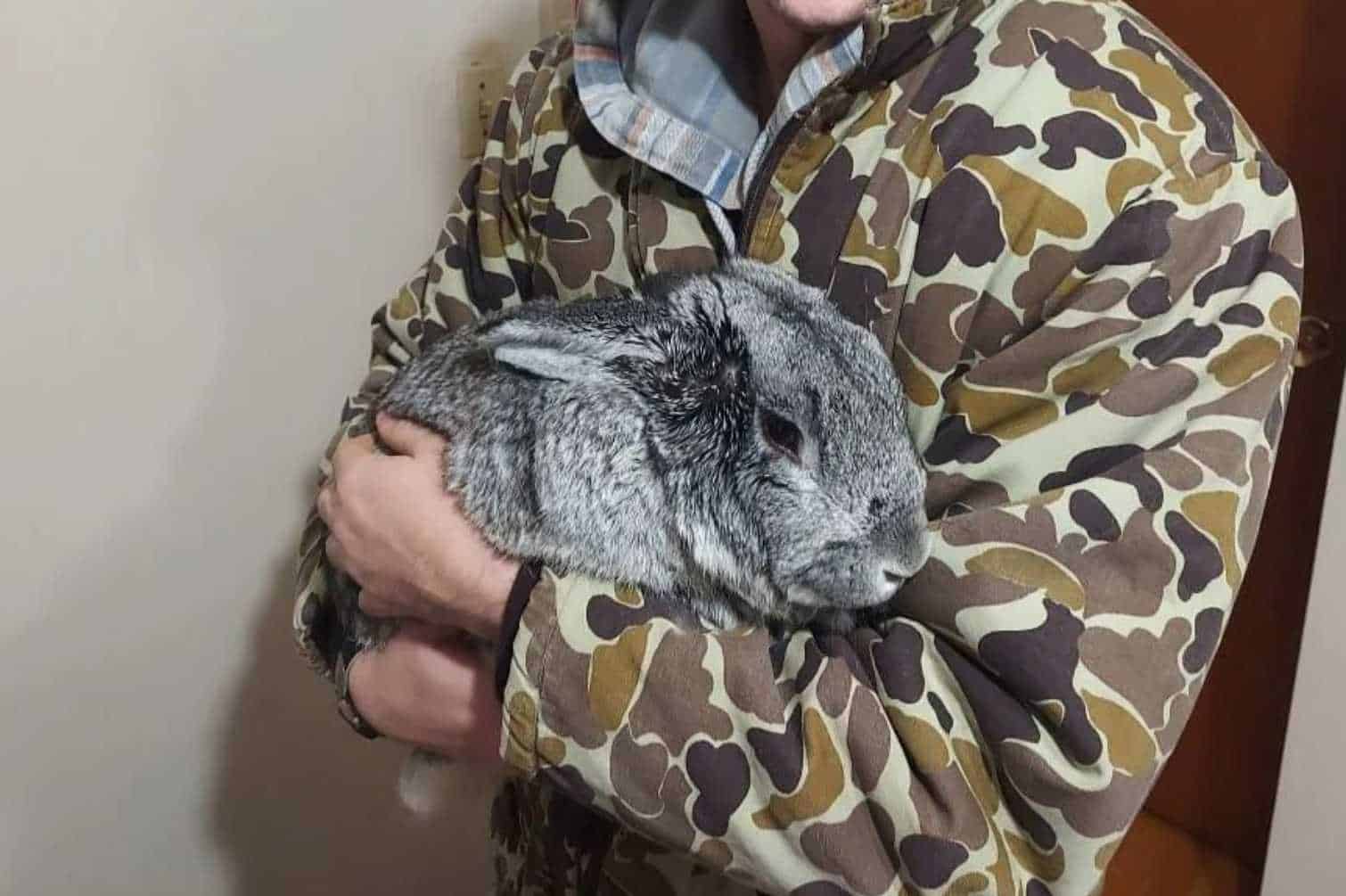 Here is a list of the possible health issues of a Chinchilla Rabbit and how to treat them:

Rabbits’ teeth grow throughout life. They are likely to suffer from overgrown teeth because their teeth grow bigger and bigger continuously. As a result, many dental problems arise, like malocclusion.

Malocclusion happens when your Chinchilla Rabbit’s teeth become gigantic that they are not properly aligned anymore.

And when misaligned teeth are apparent, the jaws become affected as well. Your Chinchilla Rabbit may have mandibular prognathism if not corrected soon.

To treat misaligned teeth, your rabbit needs regular dental checkups. Your Chinchilla Rabbit may also be prescribed more hay and grass in the diet. High hay intake may counter the progressive growth of their teeth because hay causes abrasion to the dental enamel and dentin.

It’s common for rabbits to get ear mites. It is a result of flies laying their eggs on your rabbit’s fur, which eventually hatch and eat the rabbit inside out.

With the dangerous symptoms, ear mites are definitely alarming. Your rabbit may feel irritated and may exhibit seizures, changes in behavior, and low energy. Chinchilla Rabbits may also scratch their fur so often that it would start to fall off and create a bald patch.

Visit your rabbit’s vet for treatment. Your rabbit will likely be prescribed anti-parasitic drugs like Ivermectin or Selamectin.

GI Stasis is among the fatal health conditions that a rabbit might have. Gastrointestinal stasis happens when a rabbit’s digestive system slows down or stops working.

The causes of GI stasis include stress, dehydration, gastrointestinal blockage, and anorexia. Another cause is a low-fiber diet, specifically the lack of hay daily.

The symptoms of GI stasis include lethargy, teeth grinding, and hunching. You should also observe your rabbit’s stool for signs like diarrhea.

Can Chinchilla Rabbits have cancer? 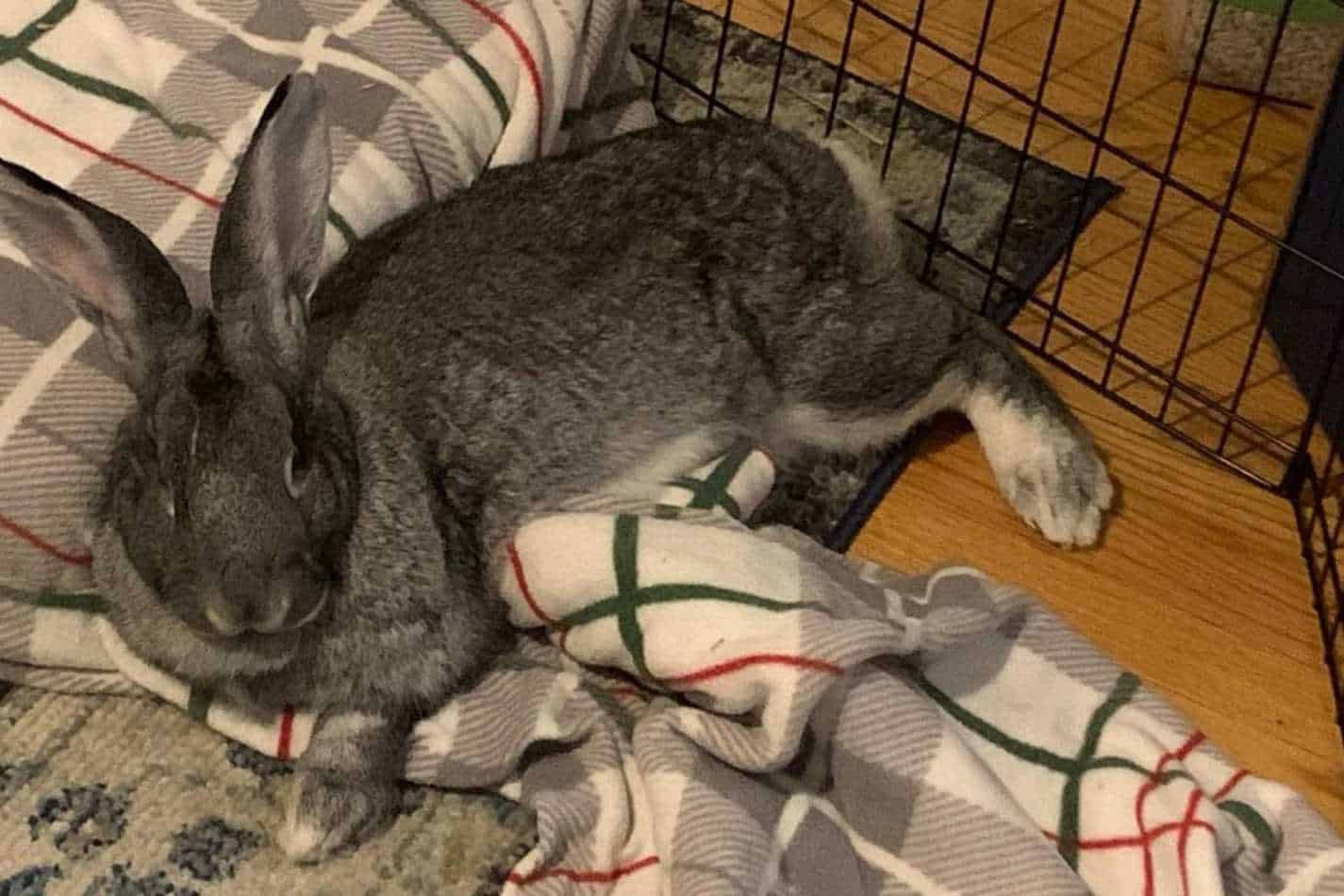 Unfortunately, Chinchilla Rabbits can contract cancer. The most common cancer found in rabbits is uterine adenocarcinoma, which is a tumor frequently contracted by unspayed female bunnies.

Another type of cancer that rabbits are at risk for is mammary carcinoma or adenocarcinoma. These two are again found in unspayed female rabbits.

We recommend having regular vet checkups to screen your rabbit for any health issues like cancer. It is a very serious illness that needs special care.

Chinchilla Rabbits do not generally require high care needs. They are very easy to maintain and are good pets to take care of. Here is everything you need to know about how to care for a Chinchilla Rabbit:

Your Chinchilla Rabbit can survive in both indoor and outdoor environments. You can opt to make room for your rabbit inside your house, or have a designated area for your pet in your backyard.

The most important thing about your rabbit’s housing is its safety. Your rabbit’s enclosures must not be exposed to extreme temperatures. Having housings exposed to sudden changes in hot or cold temperatures can cause abrupt health issues.

Another thing to consider is to ensure that your rabbit’s cage is away from potential predators, especially for outdoor housings. For indoor cages, the enclosures must be big enough for this medium-sized rabbit. The area must be well-ventilated too.

Moreso, if you have an American Chinchilla or Giant Chinchilla, you should make sure that their cage is large and spacious. Considering their size, the minimum dimensions of their cage would be 14 in with a 4 ft squared base.

Feeding Chinchilla Rabbits is the same as the other rabbit breeds. They generally have the same recommended diet, consisting of hay, grass, pellets, water, vegetables, and fruits.

The most important part of their diet is hay and clean water, so remember to provide them with a constant amount daily.

Because Chinchilla Rabbits have short, straight fur, grooming them is not much of a task. They do not require constant grooming. But of course, grooming them regularly helps in keeping their fur clean, soft, and fuzz-free.

Other than their coat, Chinchilla Rabbits’ nails must be groomed too. Always keep them trimmed for hygiene and safety.

Chinchilla Rabbits shed during fall. However, this breed does not shed as often as other house pets. Therefore, their coats don’t necessitate lots of maintenance.

Do Chinchilla Rabbits need a lot of exercise? 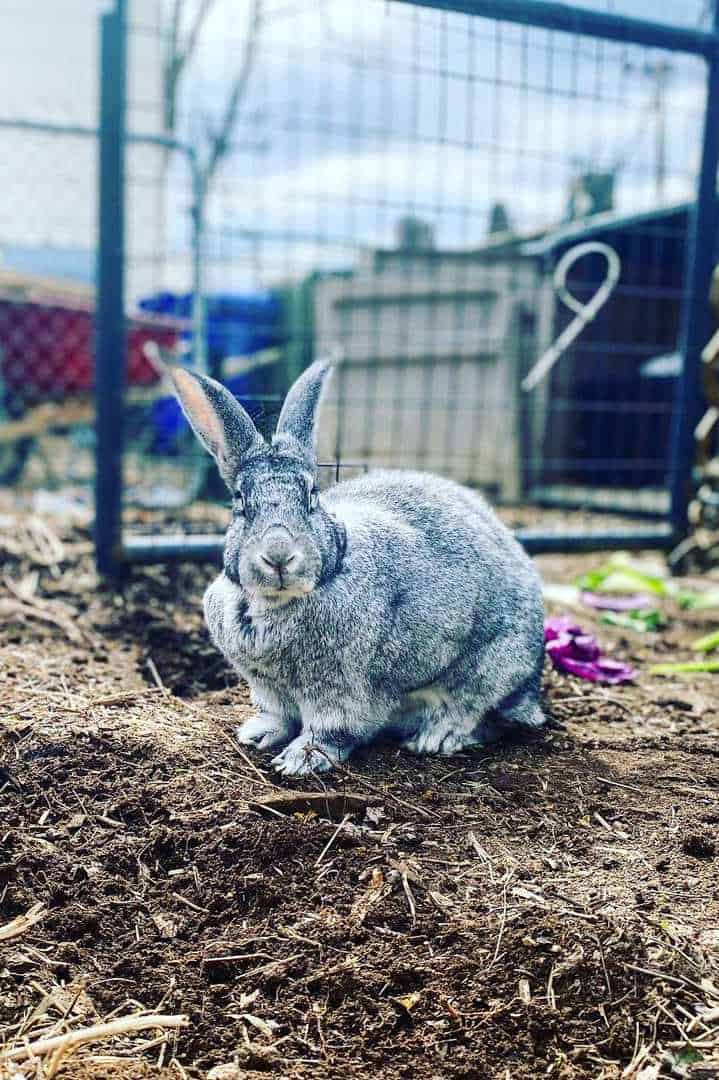 Chinchilla Rabbits need to exercise every day to release their energy and keep their insides moving. The optimal exercise time of a Chinchilla is around 3 hours daily.

Chinchilla Rabbits aren’t highly energetic, but they surely love playing around and getting your attention. Giving them enough time to run around and play keeps them active and happy.

If you can’t keep up with their high spirit, you can shop for rabbit toys that your pet can enjoy. Rabbit toys keep your Chinchilla’s mind stimulated and agile.

Yes, Chinchilla Rabbits would make a good house pet. This breed is friendly, sociable, and gentle, which homeowners adore.

Chinchilla Rabbits are very suitable for families with kids and seniors who are looking for a docile pet to take care of. This pet is perfect for your entertainment, too, as they are brilliant and always on the move.

Chinchilla Rabbits are gentle, friendly, and smart rabbits that are perfect for most homes. They go along well with humans, especially families with seniors and kids.

A Chinchilla Rabbit is very easy-going and a breeze to take care of. Hence, this breed does not require a lot of maintenance to be fuss-free and happy.

If you’re looking for an adorable bunny for companionship, you should definitely consider having a Chinchilla Rabbit as your next best friend!