Can Rabbits and Chickens Live Together?

Can Rabbits and Chicken Live Together? 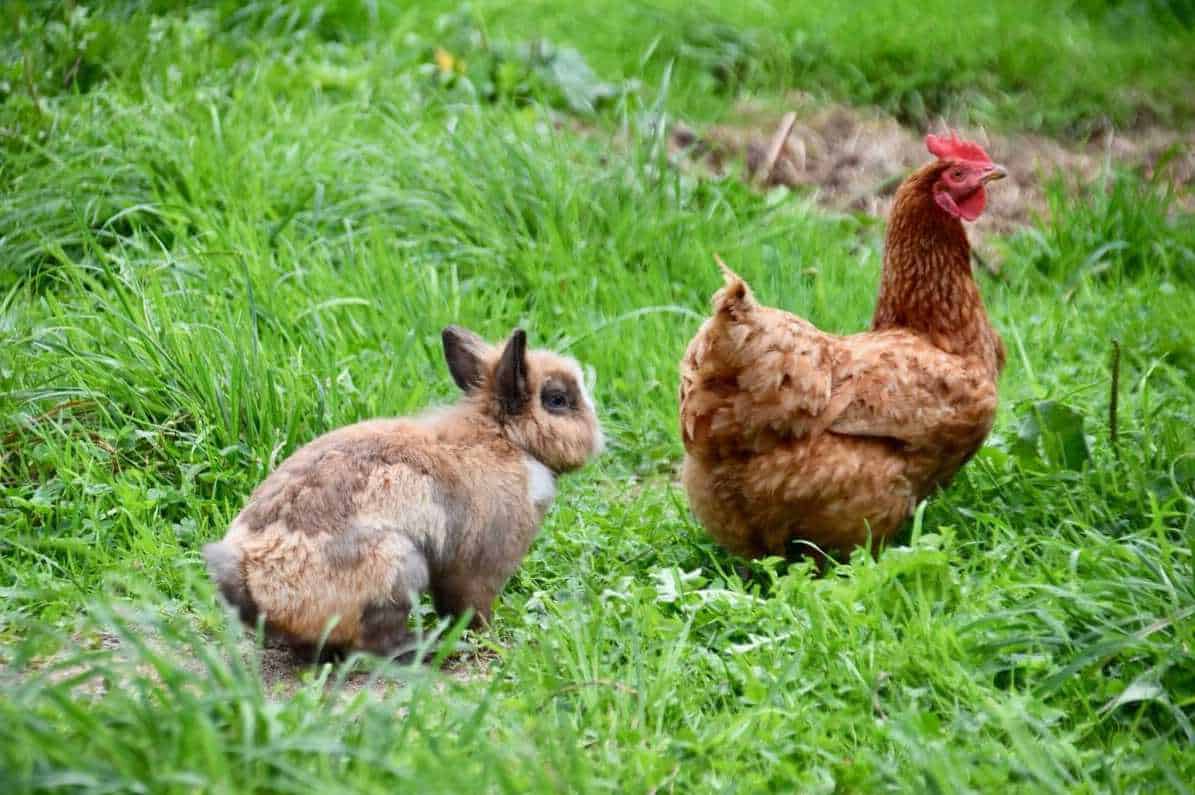 Yes, rabbits can live along with chickens. As long as they are being monitored and their needs are met, these two animals can live together in harmony.

However, this living condition can come with its pros and cons. Caring for different animals is complicated enough on its own, but mixing them can have its challenges. Many factors such as space, feeding costs, and cleaning can be tedious for caretakers, especially if they don’t have any guide or partner.

Their living conditions will vary greatly depending on how many rabbits and chickens you will keep. For example, a pet owner who only has one rabbit and one chicken will have a much easier time managing their needs than those who use the animals as livestock.

With livestock breeding and farms, keeping them together can be more challenging. It would be best to keep in mind many factors such as the social attitude of both animals, food, and shelter. The more significant number of animals means a lot of work.

How to Keep Rabbits and Chicken Together? 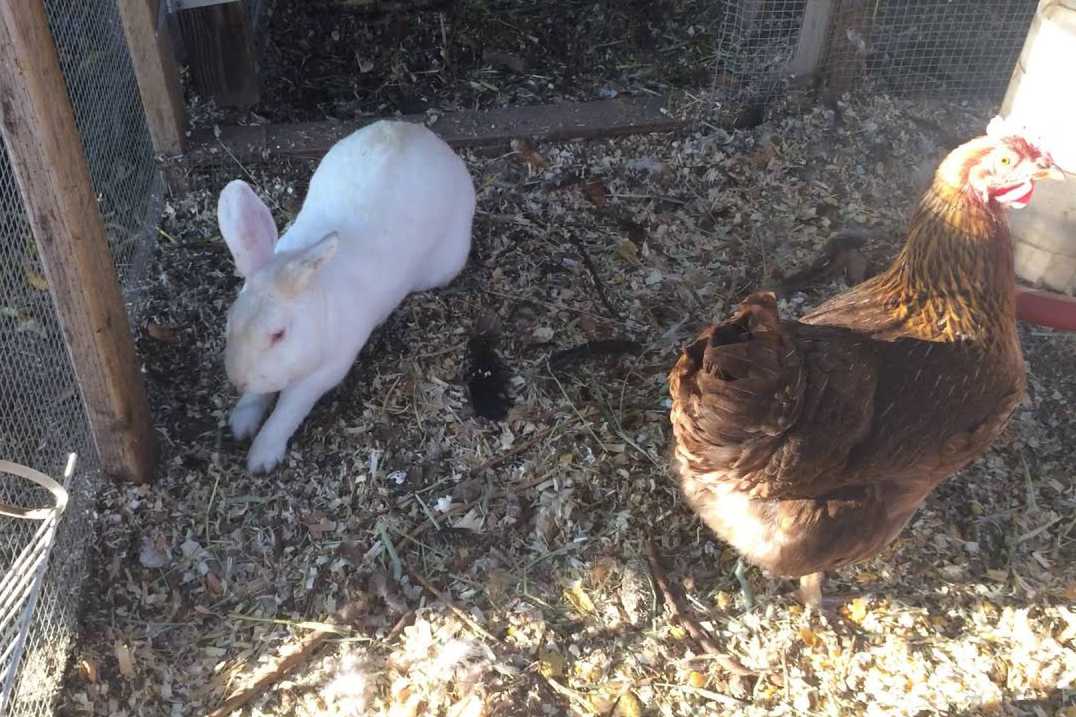 Since we now know that rabbits and chickens can live together, let’s learn how to take care of them properly. Since they are different species, they also need extra care and attention. Here are some of the factors you need to look out for.

Having an ample space and raising the animals free-range is safer for them and makes them healthier and more active. However, smaller backyard spaces can also work well if you have fewer animals, as you only need six square feet to house one rabbit properly.

Chickens are also not that hard to build a habitat for, especially if you have trees. Chicken caretakers and breeders are known to house chickens in trees so they can be kept at a higher number.

Clean the Coop and Nest Every Day

Rabbits and chickens both produce a nitrogen-rich dropping. These chemicals can be harmful for many reasons as they can interact and give the animals different diseases. Unkempt and dirty habitats can also cause health issues and foul odor.

Provide the Right Type of Food

Unlike chickens, rabbits are much more sensitive to their diet. Depending on their age, they need the right amount of other food and suitable grass and hay. If their needed diet is not met, the rabbit might suffer from adverse effects ranging from diarrhea to gastrointestinal stasis.

On the other hand, chickens are much laxer with what they eat. They are omnivores, so meat and plants are both suitable for them. They are also less prone to having digestive problems than rabbits.

However, these two animals have one in common: they love foraging. Rabbits love to hop around and chew on plants, flowers, and bushes. On the other hand, chickens will fly and explore trees and higher plants.

Pros of Keeping Rabbits and Chicken 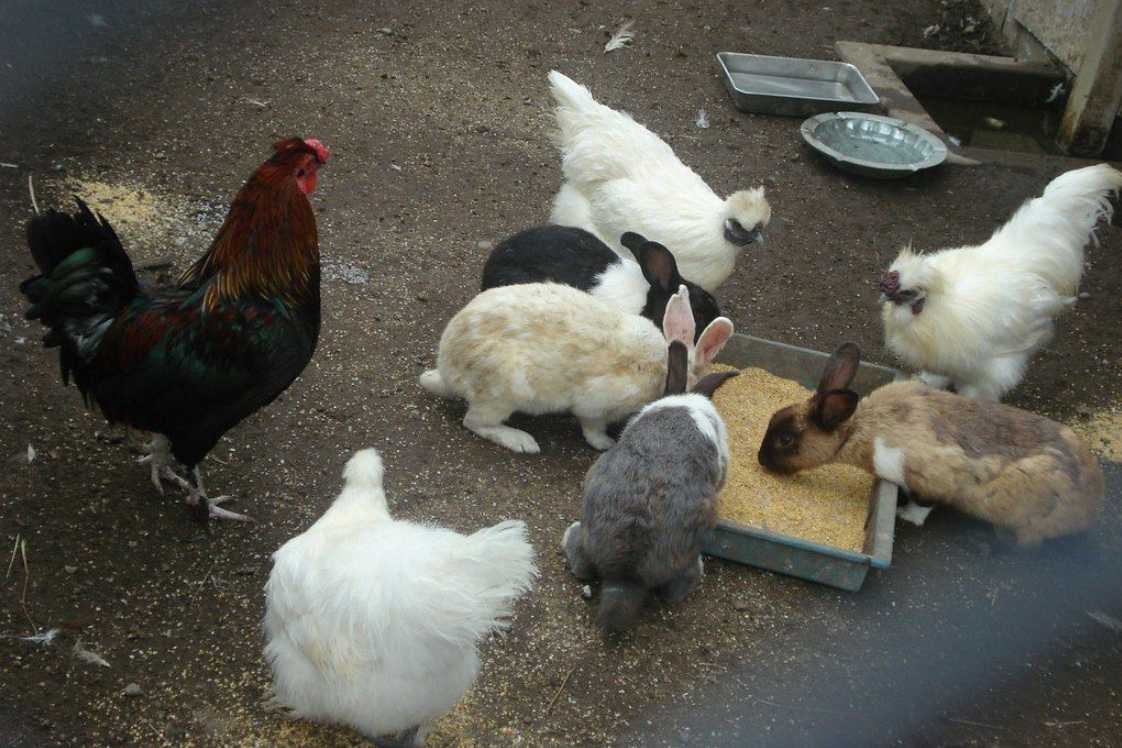 If appropriately managed, rabbits and chickens can provide excellent fertilizers. As their diet is primarily composed of grass and other plant-based food, they can produce healthy and nutrient-rich fertilizer. You can either sell it or use the fertilizer to supplement your plants.

When collecting and managing manure, burying them is one of the best solutions. The droppings of chickens and rabbits are very high in nitrogen. So, leaving them in a clear area can contaminate the air.

The smell of the manure is also unpleasant, so by cleaning and burying it as a fertilizer, you can fix two problems with one stone. The nutrient-rich land is also great for planting and having another food source to feed your family or the animals.

Chickens are great security animals. They will fight off many predators such as foxes and wild dogs. If you have many chickens, it can be a great way to keep predators from the rabbits.

Rabbits are prey animals, so they do not have much power in the offense. They mostly have two ways to deter their predators: running and hiding.

Keeping rabbits and chickens is also great for domestic animals. Rabbits are social animals. They are known to form bonds, not only with their handlers but also with other animal companions. If the animals are trained and introduced at a young age together, they can have a great bond and even care for each other.

They can be playmates and run around each other. However, introducing an adult chicken to a baby rabbit can be more challenging than vice versa. Since the chicken is not used to the rabbits, it might become territorial and attack the rabbit.

If you keep rabbits and chickens together, you can have a more significant number of livestock to sell and offer to buyers. The wider variety of animals can also mean a more substantial income if you plan to sell them as livestock.

Cons of Keeping Rabbits and Chicken 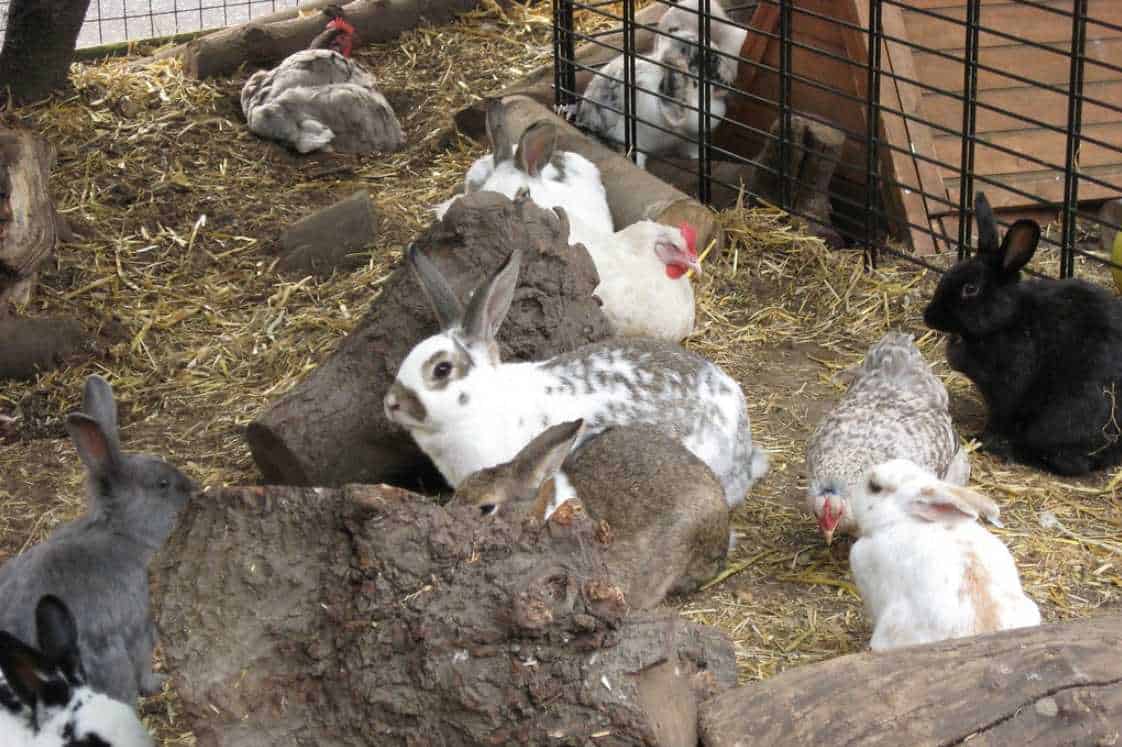 Although there are many advantages to keeping rabbits and chickens together, there are also disadvantages, such as:

When animals are closer, the spread of disease is much more likely. It’s also why keeping the hutches, coops, and nests clean is vital for maintaining both animals safe and healthy.

Although there are few viral infections that rabbits can get from rabbits, they are more susceptible than chickens. The digestive system of rabbits does not process medication the same as with chickens.

As stated above, bigger spaces are better when keeping animals altogether. This means that backyard breeders and farmers are more likely to have difficulty dealing with rabbits and chickens living together.

Rabbits and chickens can have a hard time getting along together, especially if they are livestock animals rather than pets. With pet rabbits, their aggressiveness can be lowered if they are neutered, something you cannot do if you need the rabbit to breed and multiply.

On the other hand, chickens love to peck and fight with other animals, especially the roosters. However, if the chicken is a domesticated pet, they are known to be gentler and calmer.

Disputes in the territory can also be a big problem as both are territorial animals. They might be aggressive and fight with each other often. This territory dispute is much more prominent if the rabbit and chicken are not introduced to each other at an early age.

A more significant number of animals also means an enormous amount of food. If you plan to keep these animals as pets and not livestock, you might need a higher budget to keep them healthy. This can be hard if they are not livestock.

You will also need different varieties besides an immense amount of food as different animals need other nutrients. Rabbits are herbivores, while chickens are omnivores, meaning they will need additional dietary nutrition. 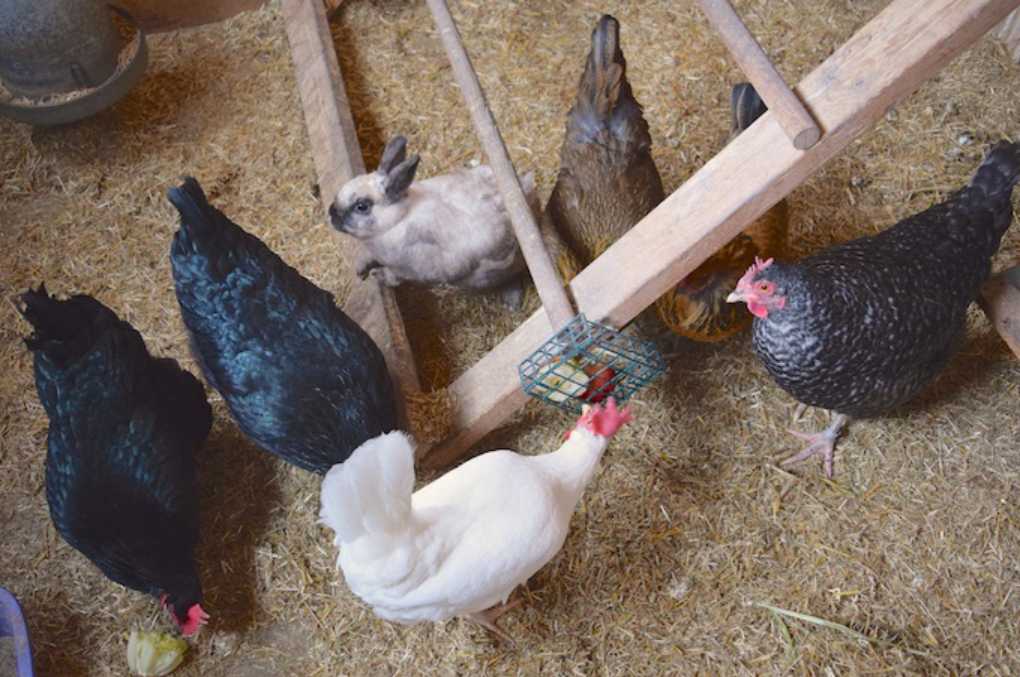 Rabbits can kill chickens. However, they are not known to be aggressive towards other animals. Most rabbits are known to be docile, gentle, and calm.

With that said, there are times when rabbits can hurt chickens. They have bigger and stronger hind legs than chickens, so getting a few kicks to the latter is not out of the box.

Female rabbits are also known to be territorial, especially when they are in heat. They are known to fight off any animal and even their handlers when entering their territory.

Of course, this is not much of a problem when the rabbit is alone in a hutch. However, it might be more challenging if they have companions, such as chickens.

The best way to handle this is to introduce both animals when they are still young. As they are familiar with each other, the aggressiveness will be lower.

If the rabbit is a pet and not a livestock supply, it’s best to neuter it before putting it with other animals. A neutered rabbit will be much calmer and docile as they do not experience heat at the same capacity as unneutered rabbits.

Chickens can also cause damage to rabbits. Their hard and prickly beak can pierce through the sensitive and soft skin of the rabbit. Chicken flock can also be territorial towards rabbits, especially if it’s introduced when the chickens are too old.

However, you can find a docile and gentler breed of chicken to be kept in your coop. They are less likely to attack and peck your rabbits.