Although brown rabbits are less popular to some people, they still look adorable for many. With their long ears, chubby cheeks, and brown fur, who can even resist their charm? If you plan to pet a brown rabbit, here are the 7 brown rabbit breeds that you should not miss! 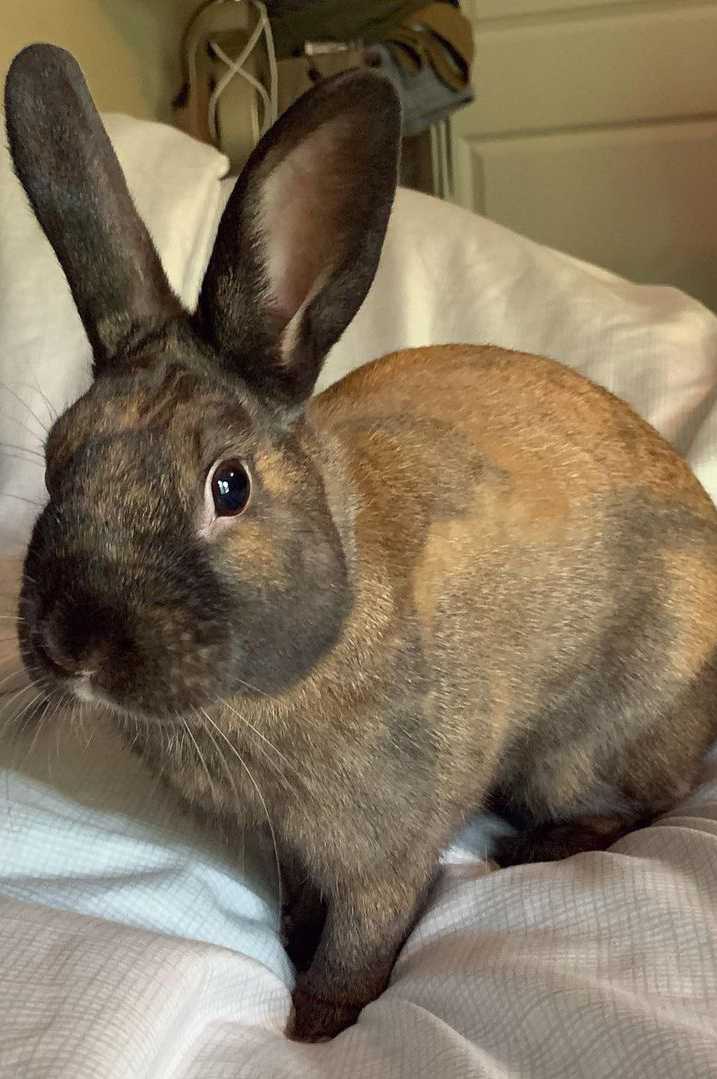 Cinnamon rabbits are lovely creatures because of their stunning brown coats. They are perfect pets with their calm, obedient, and friendly traits. Because of the beauty they possess, they easily capture the attention of any rabbit owner.

The tints of cinnamon’s fur are almost the same as ground cinnamon. They are light brown with a dash of smoky gray around the ears, nose, and paws. As of now, no other hues are recorded.

Because of their short coats, grooming these breeds is easier. To keep the rabbit’s fur soft, it needs to be brushed much more frequently. In shedding season, brush its fur twice a week.

When these medium-sized rabbits reach adulthood, they weigh no more than 9 pounds. Their ears can grow to be four inches long. Unlike some breeds, their heads are proper for their bodies.

To protect them against predators, their homes should be made of galvanized iron. In addition, you must provide them with a separate place for their droppings. When their wastes stick in their fur, they may experience diseases like flystrike.

Cinnamon rabbits are great for breeding. They can produce two to four litters of rabbits per year, with litters of four to six babies. 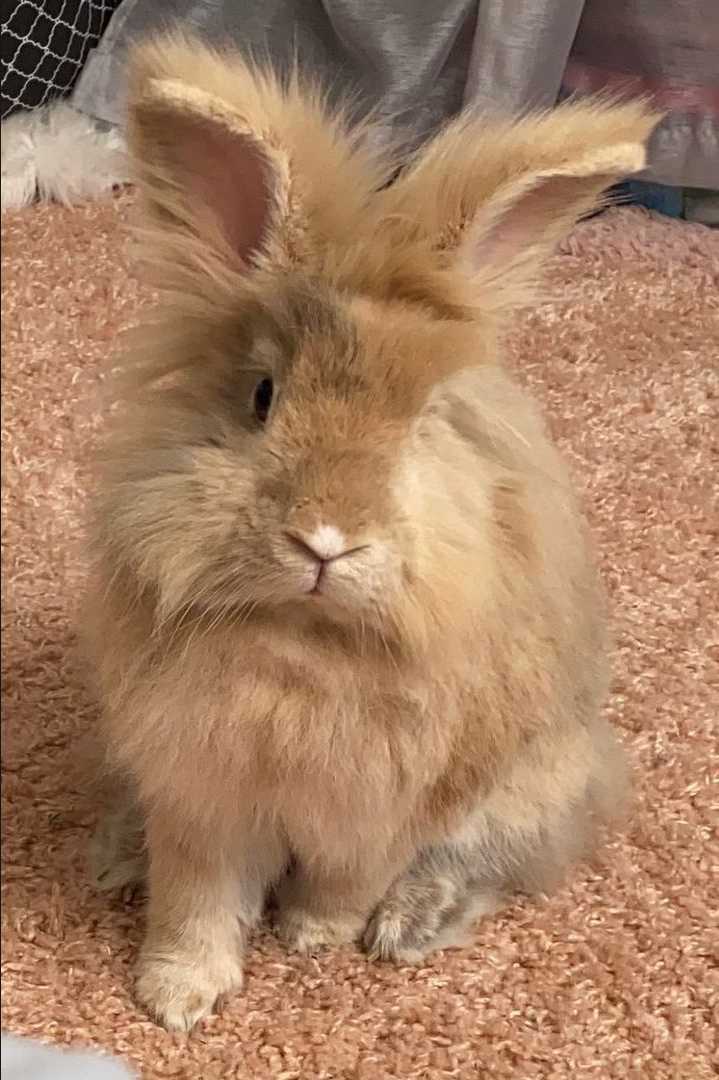 The Lionhead breed is a tame rabbit that originated from Belgium and France. It is unique in appearance and has remarkable characteristics. This furry buddy has traits that make it the perfect pet at home.

With its wool mane, you will notice that its coat forms like the coat of king cloth or yarn. This breed has two types of fur.

It has a single mane, a small, thin mane, around its head, chin, and ears. Sometimes it has a double mane on its chest. It is similar to a single mane but much thicker.

Their wool around their heads is not more than two inches. A lion’s head mane looks like a full circle around the head. It also has a V shape near the back of the neck and can extend between the ears.

As stated by ARBA Strands, lion heads are identified as having the color of chocolate, blue, and black. Tortoise, blue-eyed white, ruby-eyed white, and chestnut agouti are the other colors. Some have a tint of seal, silver marten, sable point, smoke pearl, and Siamese sable.

Lionheads want to explore outside of their cages. They like to bond and spend a lot of time with their owners. For the baby rabbits, keep them away outside your home to protect them against predators. They need complete attention while they are still small.

A Lionhead’s diet is supplemented with 70% of hay. You must also include a small amount of pellets in its diet. Feed them with leafy greens and vegetables, as well as safe fruits.

For the adult Lionhead rabbit, they can eat one-fourth of the high fiber pellets daily. Before including new food in their diet, consult with a veterinarian first. 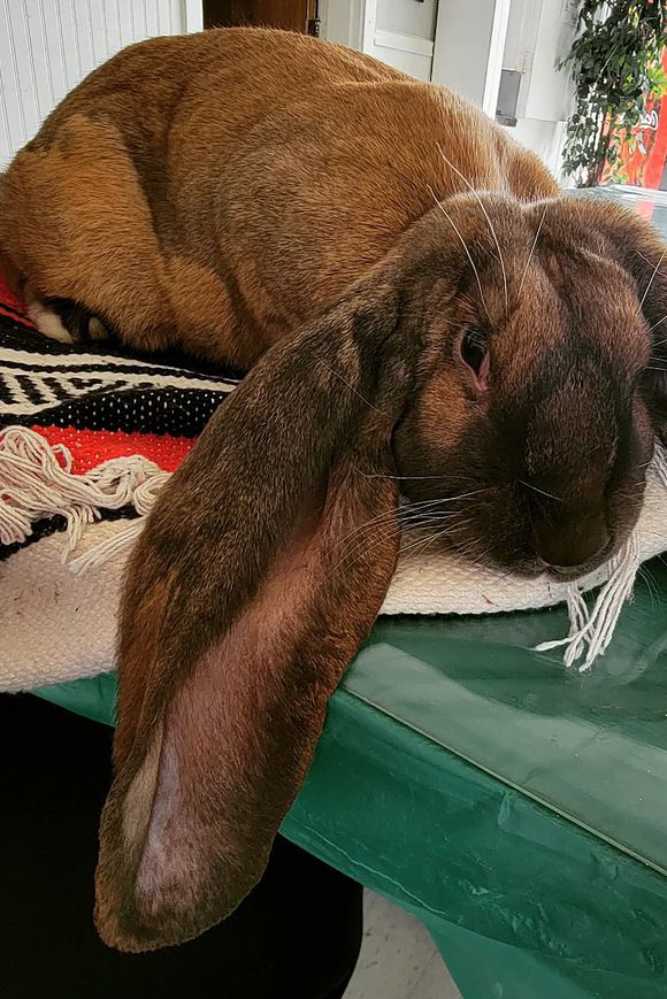 The English Lop is well-known for its characteristics. It is also famous for its signature floppy ears and its great personality. Their ears were oversized and fell at the side of their faces. They have a mandolin-shaped body and a huge head with wide-set eyes.

The English Lop has a soft coat of fur. You only have to maintain flyback fur, but you don’t have to groom them regularly. Lionheads constantly groom themselves.

Their breed colors include black, agouti, grey, orange, black torts, and red-eyed-white. They also come in solid and broken colors.

These creatures are always full of energy with their curious and easygoing personality. They bring the fun at home as family companions.

With their gentle nature, they are willing to be picked up. When picking them up, their front feet must not be bandy, and their tail must be straight.

As a reminder, never put them in a bath since it can result in a cardiac condition. Instead of putting them into the water, you can clean them with a damp towel.

Like any other breed, they always need to be out of their cages. A large area is beneficial, so they can stretch out their muscular legs and jump around.

English lop rabbits need to be brought in by veterinarians regularly. Because of their long ears, they are more prone to some parasites. Their nails must also be trimmed to prevent them from injuring themselves.

Ensure that they have 70% of timothy hay, vegetables, pellets, and fruits for their diet. It’s better to give them kiwi fruits, papaya, mango, pineapple, apricots, and currants.

Vegetables that are good for them are broccoli, bell peppers, and Brussels sprouts. You can also add leafy greens, sprouts, spinach, and radish tops. 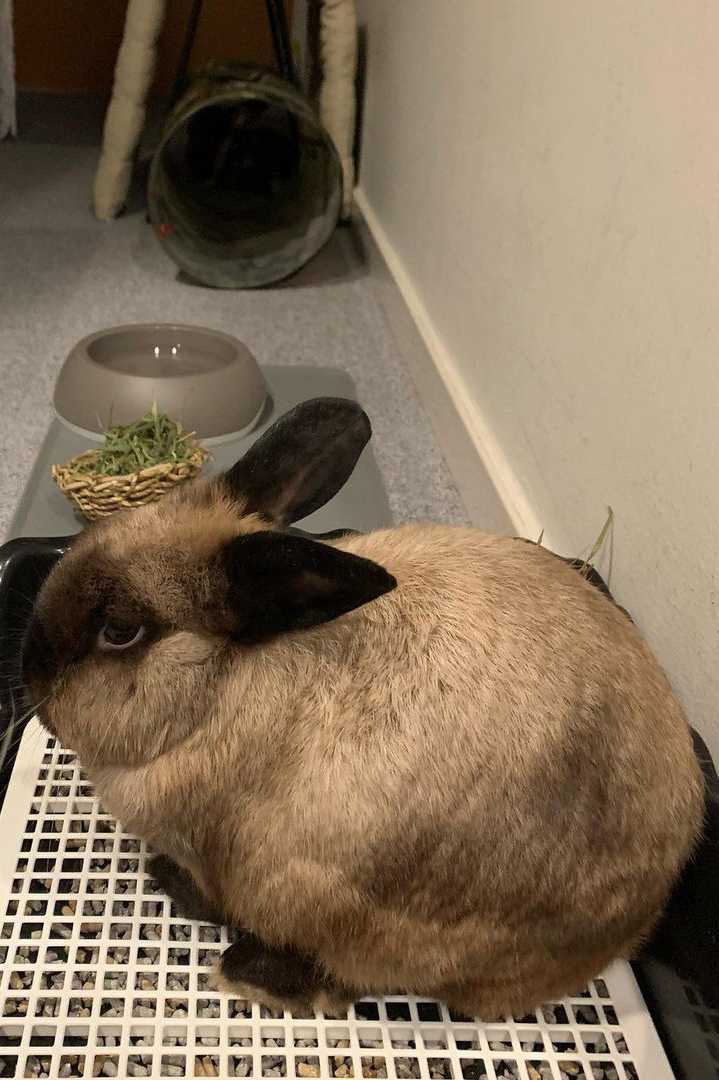 Although the American sables are short-haired, they have thick coats that require grooming. In addition, they need to shed furs in the molting periods. Because of this, they need brushing with a slicker brush twice per week for heavy shedding.

When it comes to their body sizes, these bunnies have commercially-sized bodies. They weigh between eight and ten pounds. Males typically weigh slightly less than females. These rabbits have rounded heads and ears that are vertical and upright.

This rabbit breed is only available in one color recognized by the ARBA. Like a Siamese cat, their head, feet, ears, back, and top of tail are dark sepia color. At the same time, the rest of their coat fades to a lighter tan.

American sables are enthusiastic rabbits that enjoy running around. These American sable rabbits prefer gentle petting on the back and between the ears.

They are lovely pets suitable for families, singles, seniors, couples, and children. They can be your companions in your house or apartment with their friendly traits.

This breed’s favorite toys are plastic balls. If you plan to get an American sable as a pet, it is recommended that you put cardboard in its cage. When it gets bored or hungry, it chews and gnashes its teeth.

Like other rabbits, their diet must consist of 70% of hay. Therefore, don’t feed much of the amount of fruit that is high in sugar. Instead, give them leafy greens, pellets, vegetables, and water.

Before feeding them grass, wash them first. They might contain chemicals such as pesticides that can harm the rabbits’ health.

American sable rabbits also possess overgrown teeth like other rabbit breeds. It may cause a dental problem that can lead to gastrointestinal stasis. Consult your veterinarian about their health and diet to prevent medical conditions. 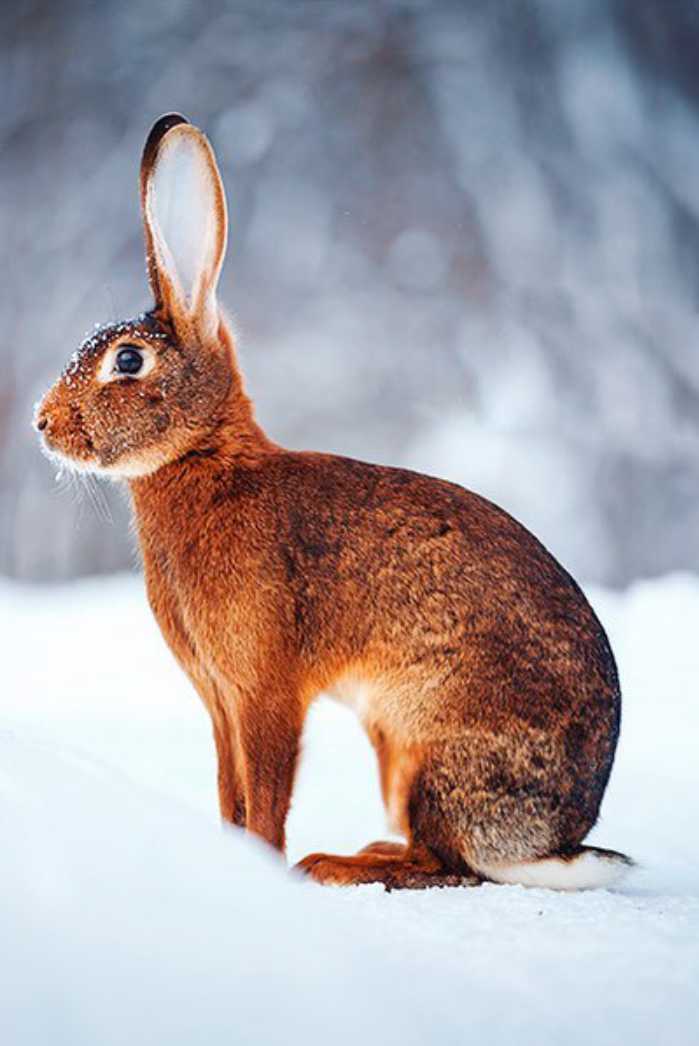 The Belgian hare is a domestic rabbit breed similar to wild hares. The body of this breed is long, muscular, and arched. They have long heads and straight tail parallels to the backbone. Their ears are tall, slightly wider, and upright.

A typical Belgian hare has a reddish-orange tint with bright rust accents. There are lighter-colored eye circles and gray hues on its hips and upper back. Because of its features, the Belgian hare is often used for show purposes.

Unfortunately, this breed may not be for everyone. It tends to get easily nervous when it suddenly hears strange sounds or voices.

When this breed is in panic, it runs insanely or jumps, which may lead to an accident inside of the hutch. Compared to other rabbits, it requires more patience and care.

If you don’t like to spend much time grooming a rabbit, a Belgian hare is a perfect choice. These breeds are clean animals because they have bright and short fur.

You only have to groom them once in a while by brushing the dead hair or fur. As much as possible, don’t bathe them if you don’t want to see them stressed out.

At home, they must remain confined to their cages at all times. This is because their diet needs a high quality of hay that should be 70 % of their diet. Aside from that, fresh water must always be available.

But there are some foods that you must abstain from, such as iceberg lettuce. Also, if your rabbit doesn’t consume enough hay, its teeth at the front of the mouth will begin to grow into its jaws. It is a painful condition that needs to be treated by a vet. 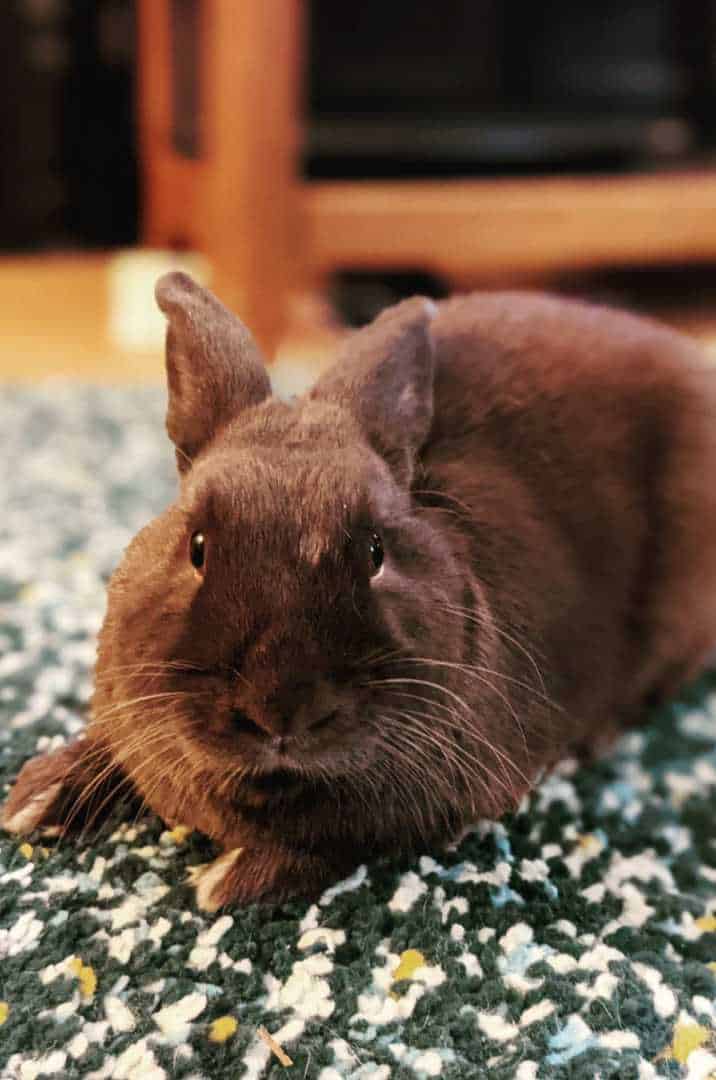 With their chocolate-colored fur, the Havana rabbits are similar to Cuban cigars. This breed is solid and should weigh no more than 6.5 lbs.

They typically have short and round bodies. They have a short head, fat cheeks, short ears, and medium-sized eyes. Their legs are straight, and their toenails are dark-colored.

Havana rabbits have soft, short, and flyback furs that don’t require much grooming. Indoor rabbits can be groomed once a week with a slicker brush to maintain shedding.

Havana rabbits have a class of four colors, such as chocolate, black, blue, and broken. ARBA recognizes the breed and its colors.

This breed is a charming creature. They enjoy traveling around the yard or even inside the home. Aside from that, they are easy to communicate with, especially if their owners spend a lot of time with them.

A Havana rabbit is ideal for rabbit owners who prefer peace and solitude inside the house. Despite its medium-sized body, it doesn’t have too much energy and enthusiasm. Children and senior citizens can easily carry it around since it is not too heavy.

Aside from hay, you should also feed this rabbit with pellets, fruits, and vegetables. But you must avoid some kinds of leafy greens, such as icebergs.

Also, don’t give treats that don’t have enough nutrients and vitamins. Vegetables that you must not provide are cabbage and potatoes because they are high in sugar.

Havana rabbits both enjoy living either inside or outside of their hutches. However, you must give them ample time to go outside because they need sunlight in the morning. Stretching their legs is also their way of exercising. 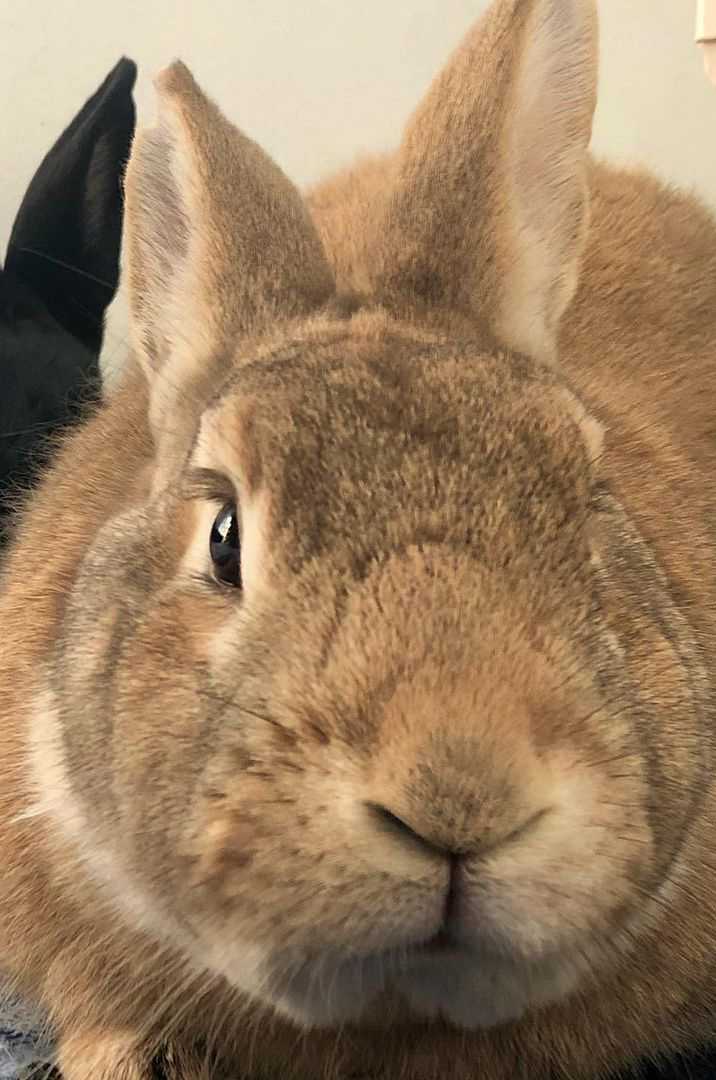 The Polish rabbit, also known as a dwarf breed, is a small rabbit that is extremely cute. They weigh less than four pounds.

These furry buddies are born in litter sizes ranging from two to four kits. Because of their adorable appearance, these rabbits are presented regularly on rabbit shows.

Polish rabbits have short and pointed ears at the back of their heads. You can quickly notice that their shorts heads have large eyes and fat cheeks. This rabbit breed has soft and short flyback fur. Their fur is easy to groom.

Aside from being intelligent, Polish rabbits are funny, cuddly, and docile. They want to be picked up and cuddled by their owners frequently. They can get quickly bored in their cage, so they find a way to give them attention.

The approximate life span of this Polish rabbit is five to six years. When you care for them properly, you may be able to extend their lives. They should eat a portion of hay the size of their body, pellets, and vegetables. Ensure to give them plenty of fresh water at all times.

Aside from the elegant color of their fur, brown rabbits have unique personalities. Plus, their features differ from one another. They are ideal as pets because of their docile, friendly, and charming traits.

Like any other breed, the 7 brown rabbit breeds above also require the proper care and attention.