The Angora rabbit is known for its long fur, commonly harvested for wool. Their fur is priced and widely compared to be softer than cashmere.

The size can vary from breed to breed, but they typically grow from small, commercial size, and large with certain breeds. The angora rabbit weighs around 3.5kg to 6kg or could go even bigger under certain conditions. They have a lifespan of about 7-12 years.

Angora rabbits are primarily calm and docile, especially to their handles. Like other rabbits, they are most likely to make a bond with their caretakers.

Their color can range from light tones such as white and tan to darker tones such as gray and brown. Some rabbits can have a combination and gradient hues of colors, but mostly, they come with light tones.

Since they are gentle and docile, they can be a pet for families with kids as long as they don’t cause any harm to the rabbits. Angora rabbits can also be placed indoors and outdoors as they are adaptable and naturally a forager. 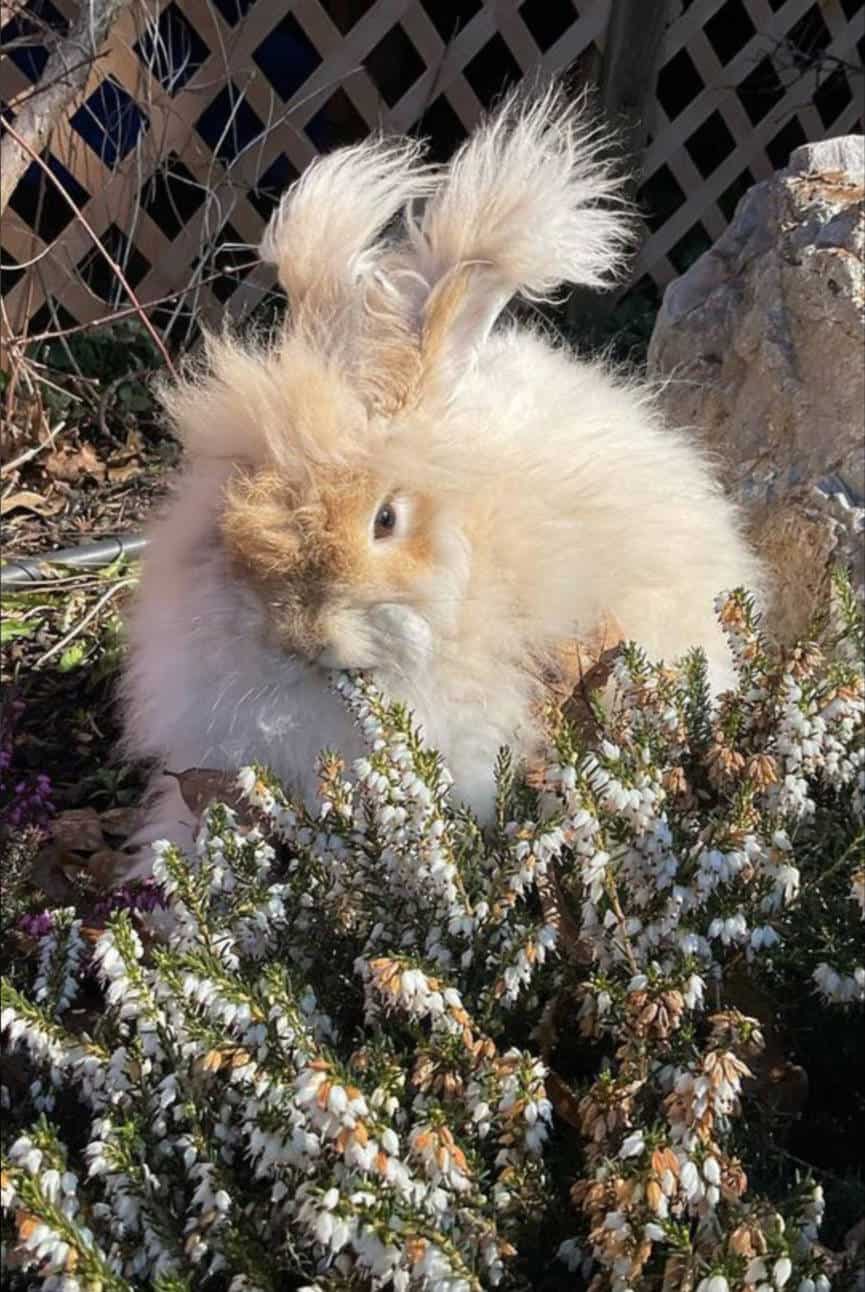 Angora rabbits originated from Angora, Turkey (modern-day Ankara) hence the name. They blossomed in popularity during the middle of the 18th century due to being a desired pet for the royalties. With this popularity, they also spread throughout other areas of Europe, such as Germany and France.

By the early 20th century, angora wool had been commercialized in the United States of America. The country consumes around 100,000 pounds of angora wool during the world wars. In 1939, American Breeders Association recognized two breeds: French and English. 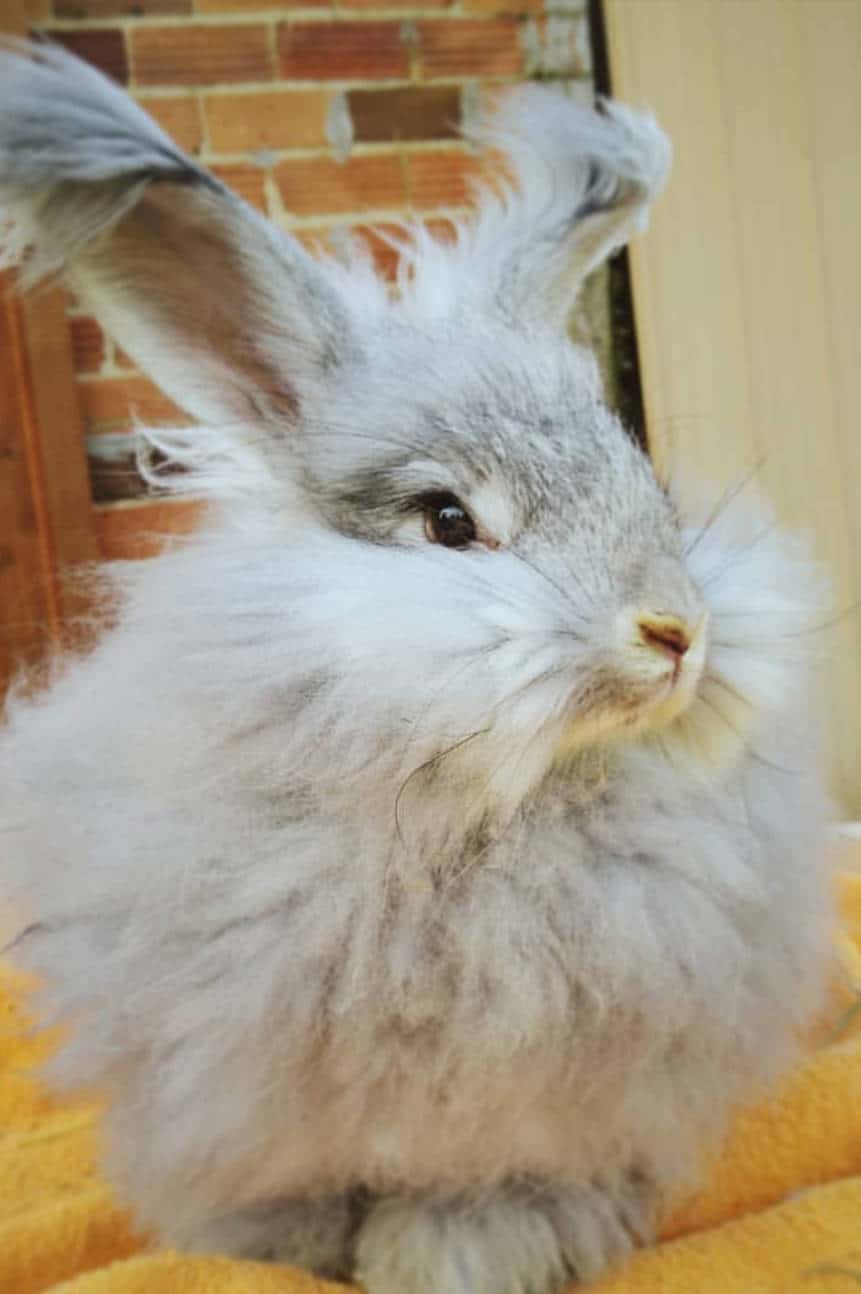 Other breeds such as Chinese, Finnish, Japanese, Swiss, Korean, Russian, and German are not recognized by ARBA. The associations deemed them to be primarily similar to the four common types of the angora rabbit.

English Angora rabbits are the most popular breed. It’s relatively easy to manage as they don’t have long fur.

Louise Walsh from Massachusetts crossed German Angoras to other breeds hoping to make a more scaled type of rabbit. Walsh succeeded, resulting in the Giant Angora rabbit. The Giant Angora Rabbit is noticeably more significant with longer fur than others.

You don’t have to worry about the fur as it’s completely safe. You can supplement the coat by grooming the English Angora rabbit regularly.

When it comes to their appearance, English Angora rabbits have long thick, woolly fur throughout their bodies. Their coat mainly consists of white and chestnut tones.

The French rabbit is much sturdier and heavier compared to other Angora rabbits. Their coat is relatively shorter and easier to manage than the English breed.

The French Angora’s fur can range from a light white and chestnut to rich ash, black, and blue-gray color. Coats from French Angora are called wool as they make garments.

Due to their shorter wool, the French Angora rabbit is much easier to groom. Unlike the English Angora that needs daily grooming, French Angora does not need daily brushing. You can brush their fur two to three times a week.

The Satin Angora rabbit is known for its soft and silky fur. They range in colors such as brown and white. They have relatively normal ears and doesn’t have any long fur on their face.

Like the Satin Angora rabbit, the Giant Angora Rabbit is mainly kept for wool harvesting, but it’s not rare for them to be pets or show rabbits.

The personality and temperament of Angora rabbits will vary from breed to breed, but they generally have a friendly and docile character. As they are domesticated, they don’t pose any harm to humans. Most of them can be adaptable to any family or single caretakers.

With that said, let’s get to the nitty-gritty of their behavioral patterns. 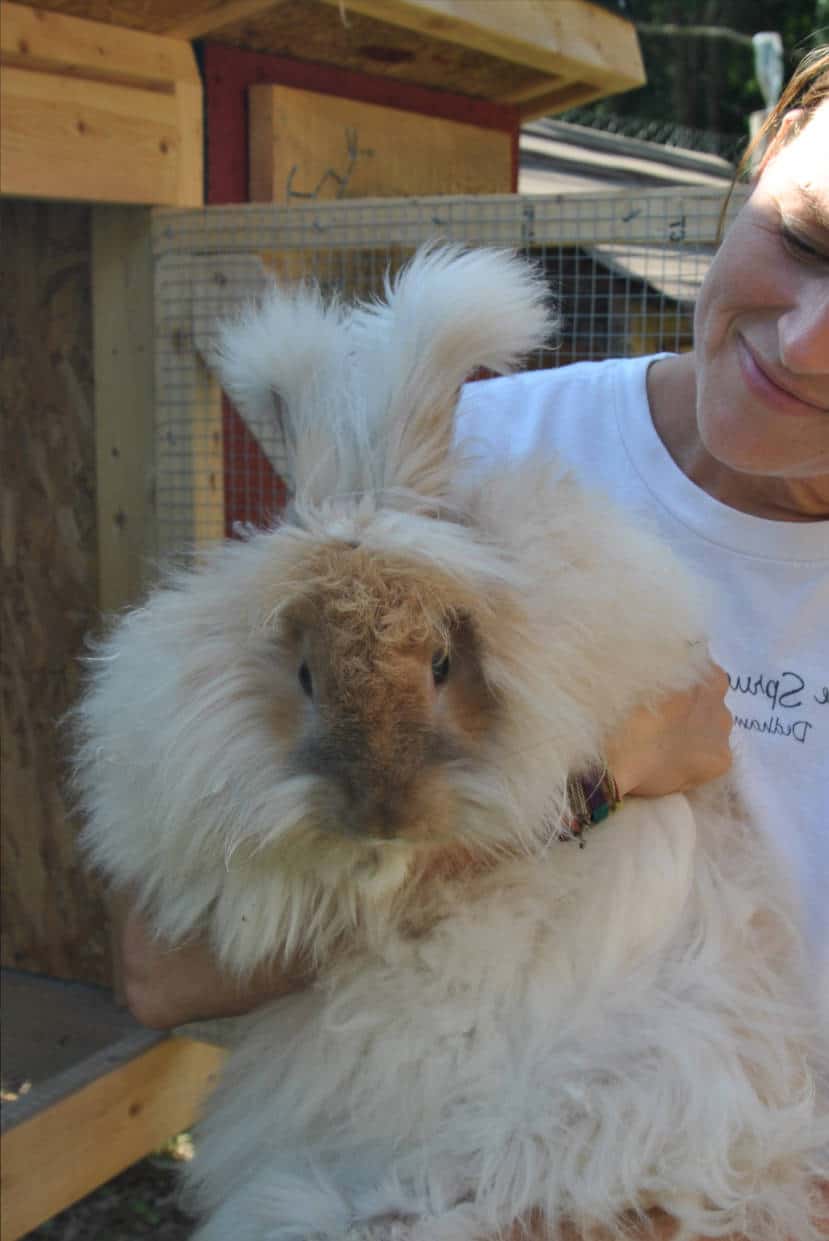 Health issues are as familiar to house pets as they are to humans. It can range from a common mite to a dangerous and even deadly parasite.

One factor that makes rabbits susceptible to many sicknesses in their fur. Without proper grooming, they can cause a slew of problems for the pet.

The long fur of the Angora rabbits made them susceptible to tangled and knots. If not immediately treated, it may make the grooming process of your pets less manageable. The lack of proper grooming can cause hair loss on Angora Rabbits, so regularly keep their fur in check.

The most common problem when you have a pet Angora rabbit is that they are prone to wool block. The wool block is the build-up of fur in the gastrointestinal tracts of the rabbit. The build-up can cause a blockage that may lead to the loss of appetite and even death.

The best way to avoid wool block is to groom your rabbit regularly. Combing with a fine brush daily will lessen the risk of wool block. Even after the shedding season, you should still periodically manage the rabbit’s fur.

Most Angora rabbit breeds will also need regular trimming and cutting sessions. You will need to shave their tuff 2-4 times a year.

Although all breeds of rabbits are susceptible to Cheyletiella mites, the Angora Rabbit is especially vulnerable to mites and parasites. These mites can cling to the long fur of the rabbit and cause mite infestation.

When not treated immediately, it can lead to itching and hair loss. The Cheyletiella mites can even pass to humans and cause itchiness. Fortunately, you can treat them quickly with anti-parasite solutions.

Flystrike or myiasis is present mainly in warm and humid areas. They can lay eggs on the long and thick fur of the Angora rabbits, resulting in maggot infestation. Rabbits with preexisting sicknesses such as obesity, diarrhea, and inactiveness have a higher chance of having flystrike in their fur. 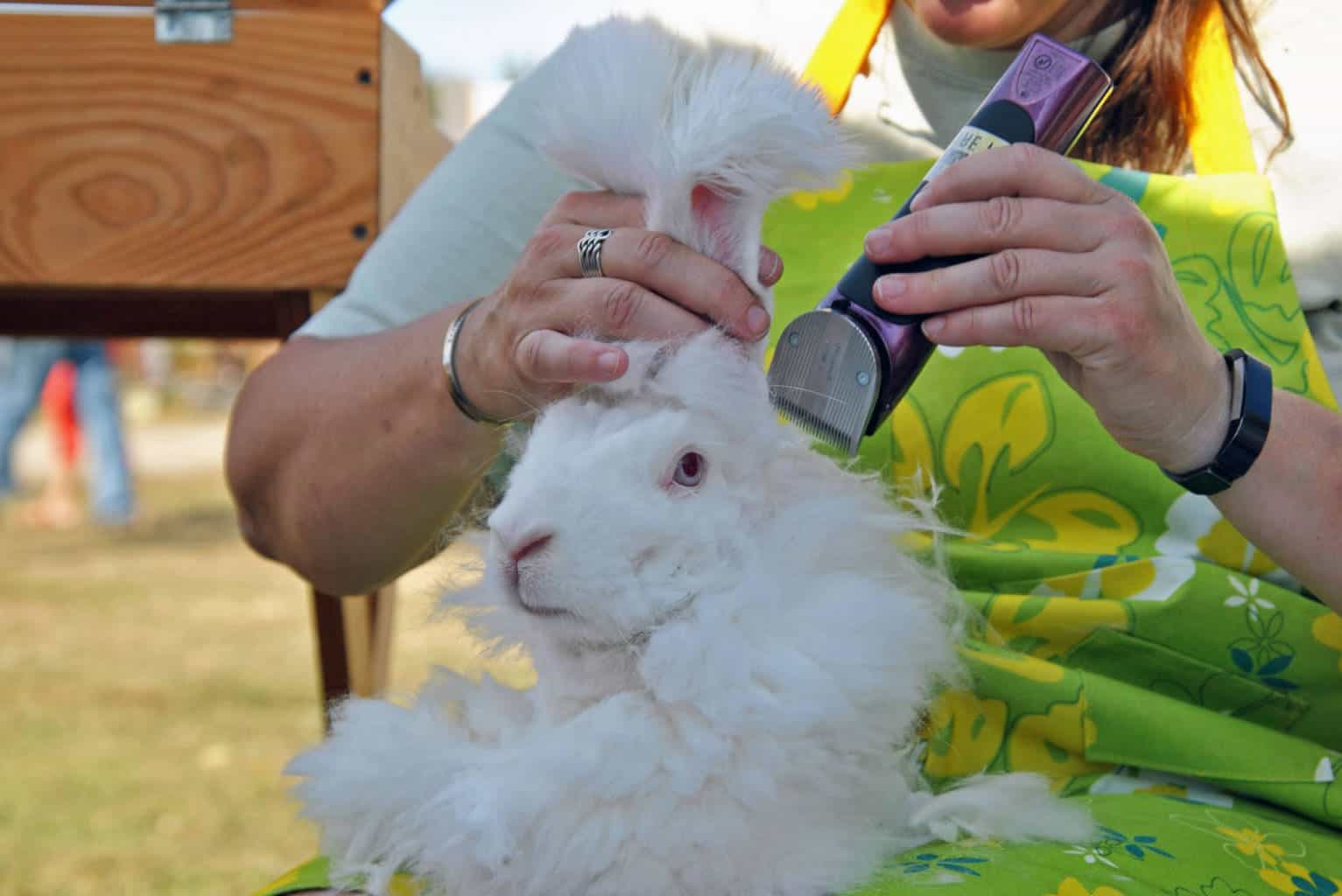 Taking care of your pets is very challenging to do. Although rabbits are common household pets, they still need a lot of time and care to bring out the best in them. Keeping your Angora rabbits in the top condition will make the life of your pet much happier.

Grooming your pets is a must, especially for Angora rabbits. As stated above, they have very long and thick fur, so they need extra care and attention. Certain breeds such as Giant and Satin Angora Rabbits have longer tuffs.

Daily combing will help the fur detangle and keep them from matting. You might also need to shear the rabbit’s coat 2-4 times a year to make them more manageable.

Rabbits don’t need to take a bath. They tend to panic when in contact with water which may even lead to a heart attack. Grooming and blow-drying rabbits are enough most of the time. You wouldn’t need to do any bathing.

The front teeth of the rabbit are one of their most distinct features. Unfortunately, they might grow longer than necessary and cause pain and discomfort. You can offer hay, woodblock, and chips to help the rabbit with their dental care.

Angora rabbits need to follow a pretty strict diet of 70-80% hay and grass. Their metabolism is not suitable for digesting other types of food such as fruits and vegetables.

Besides hay and grass, they can eat small amounts of rabbit-safe fruits.

Angora rabbits are among the fluffiest and most famous rabbits on the market. They are known for their thick and long fur, which can be their advantage and problem.

With that said, with proper care and attention, the Angora rabbit breed can be a new addition to our home or farm.