If you happen to own or plan on owning albino rabbits, it’s helpful to read beforehand and know some necessary albino rabbit facts.

As you delve deeper into their characteristics, you may find reading even the most random things about them fun; plus, some facts may come in handy in the future. 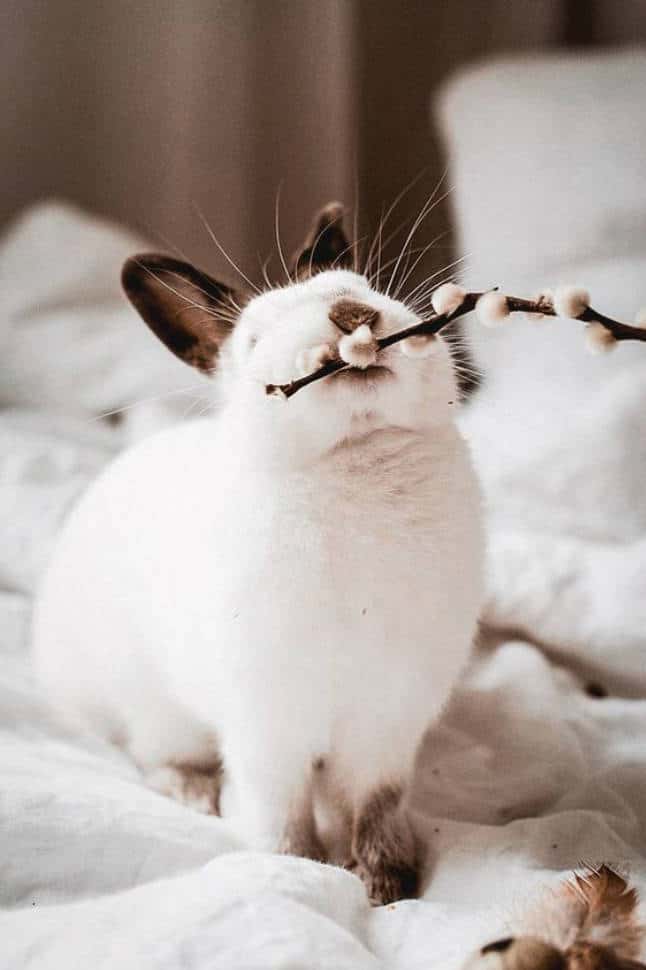 Perhaps you may have encountered seemingly peculiar animals because of their “unusual” and lighter color paired with pinkish eyes that may or may not be different from the usual ones.

Then, you may have encountered an albino animal. These creatures are head-turners as they are rare, especially in other species with a fixed color scheme other than white.

However, it’s essential to learn about albinism instead of carelessly labeling every white animal “albino.”

Speaking of albino animals, what exactly is albinism? Albinism is the lack or absence of melanin in a body.

This means there is no available pigment responsible for the color of an animal’s eyes, skin, fur, scales, etc. This genetic condition occurs most often when both parents have the recessive gene.

Contrary to popular belief, not all white animals are albino. There are white animals that are naturally white-skinned or suffering other conditions.

For example, an animal can have leucism wherein its pigmentation is abnormally reduced, affecting certain parts and characteristics of their bodies. However, they are not purely albino.

Albino animals have distinct characteristics. They tend to have pink or reddish eyes, skin, nails, or scales (if they have any). So, when you encounter white animals but do not manifest any of these characteristics, then perhaps they do not have albinism.

While albinism is more common or typically a condition for mammals, animals under non-mammal species can also have this condition.

However, they may not seem utterly white like mammals with albinism do. This is because of their ability to create other pigments besides melanin. This means that non-mammal albino creatures can have color as long as their melanin-producing genes are not entirely destroyed.

Unlike the others, living with albinism can be hard for animals in terms of survival. They may have trouble blending in. In times of crisis and the presence of predators, camouflage may be tricky for them.

Another thing is, their eyesight is not as good. Albino animals tend to have poor vision, which puts them at a disadvantage. Issues also arise in terms of their mating process. On the other hand, albino animals are rare and favored mainly by humans and maybe animals! 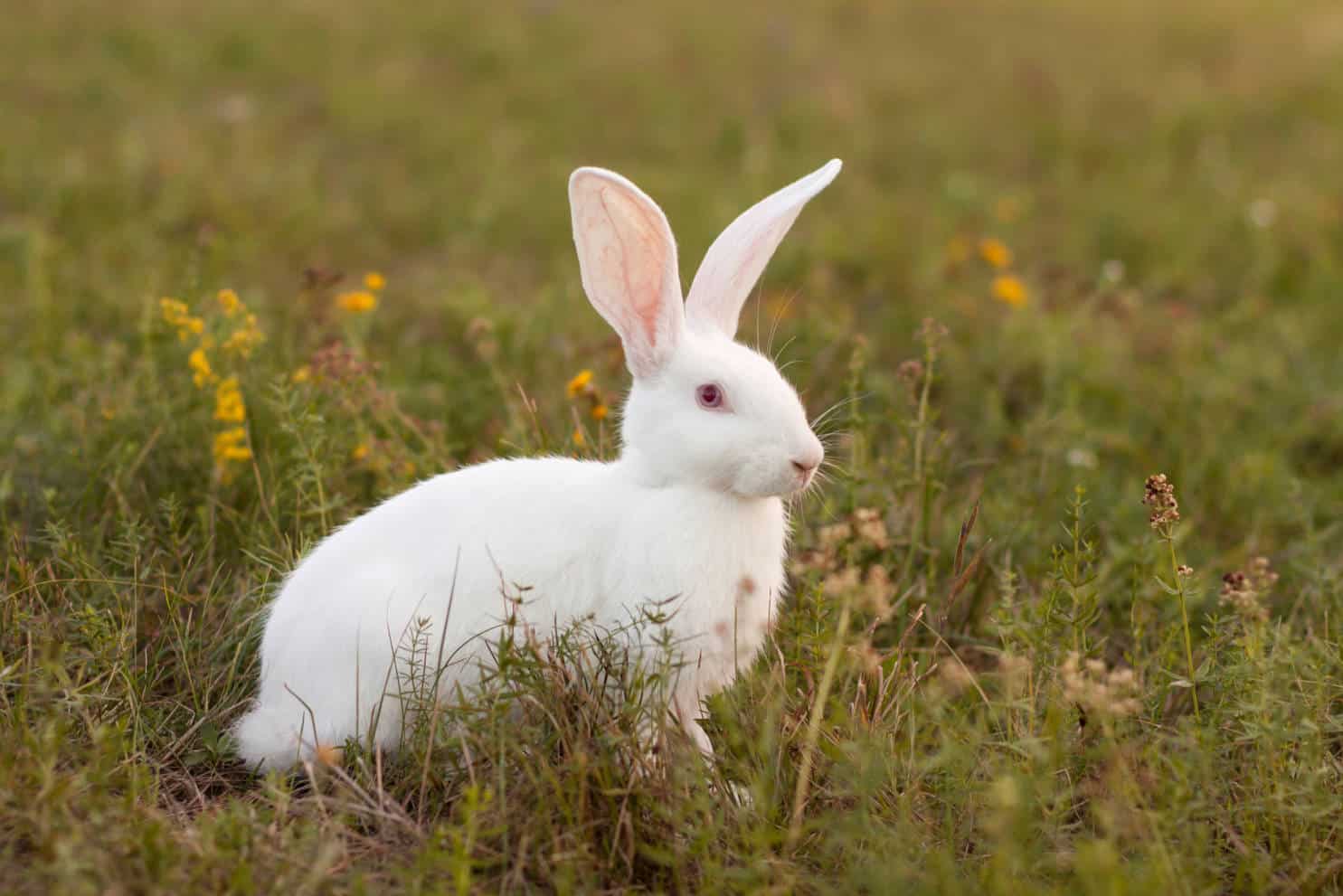 As discussed earlier, albinism is a genetically passed trait. This means it’s not a rabbit’s choice that they have this condition, nor is it achievable through “breeding.” You can call it chance or destiny, but all in all, it’s not simply and surely achievable by mating specific rabbits.

How do you know if your rabbit has albinism? Albino rabbits have no color on either their skin or fur. This means they are white with either blue or red pair of eyes.

Some people may joke about being scary having red eyes partnered in a white coat, but it’s normal, and there’s nothing wrong with that.

Albino rabbits are suitable as pets. This way, they do not struggle to survive outside with their light color and poor eyesight. When they are taken care of in a home, they can live comfortably and enjoy the best of their lives.

To get to know albino rabbits more, here are basic facts you probably should know about them.

The truth behind their red eyes 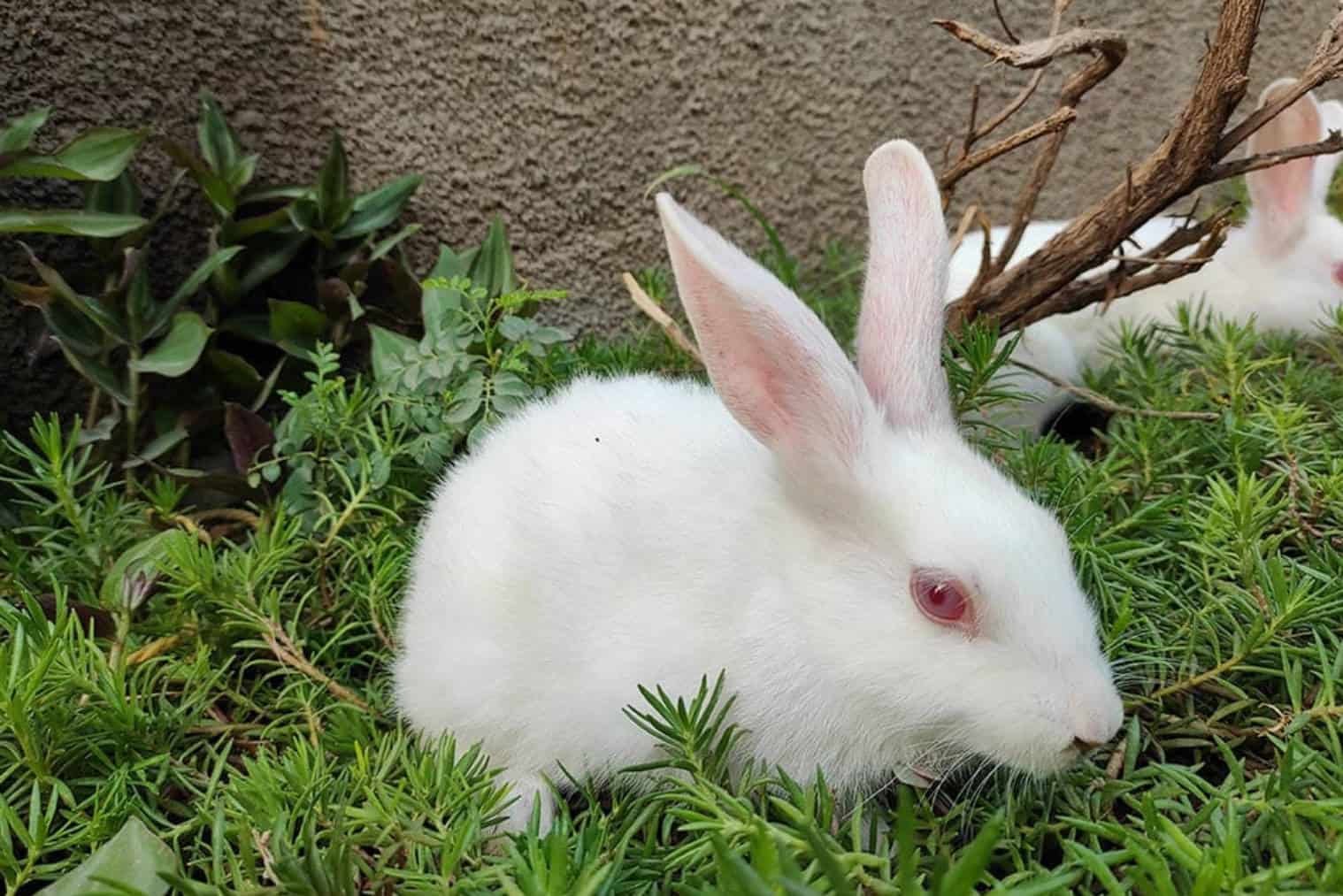 While it seems like your albino rabbit has red eyes, please take note that their eyes have no pigment; therefore, they couldn’t possibly have red pigments too.

The real reason why their eyes are red is because of reflection. Light from their blood vessel is reflected in their iris, so it appears that they have red eyes.

Rabbit lifespan can range from up to 12 years. However, this is dependent on several factors, including breed, health care, diet, etc.

This is why it’s essential to learn and get to know your pets continuously. As for albino rabbits, their life expectancy is along the average years too; 8 years or more.

Rabbits have their personality, and stereotyping them would not be justifiable. However, they may have general similarities to each other.

Albino rabbits have no distinct or notable differences in their mood just because of their condition. Like all rabbits, their personality and temperament depend on their breed and how they were raised; nature and nurture. 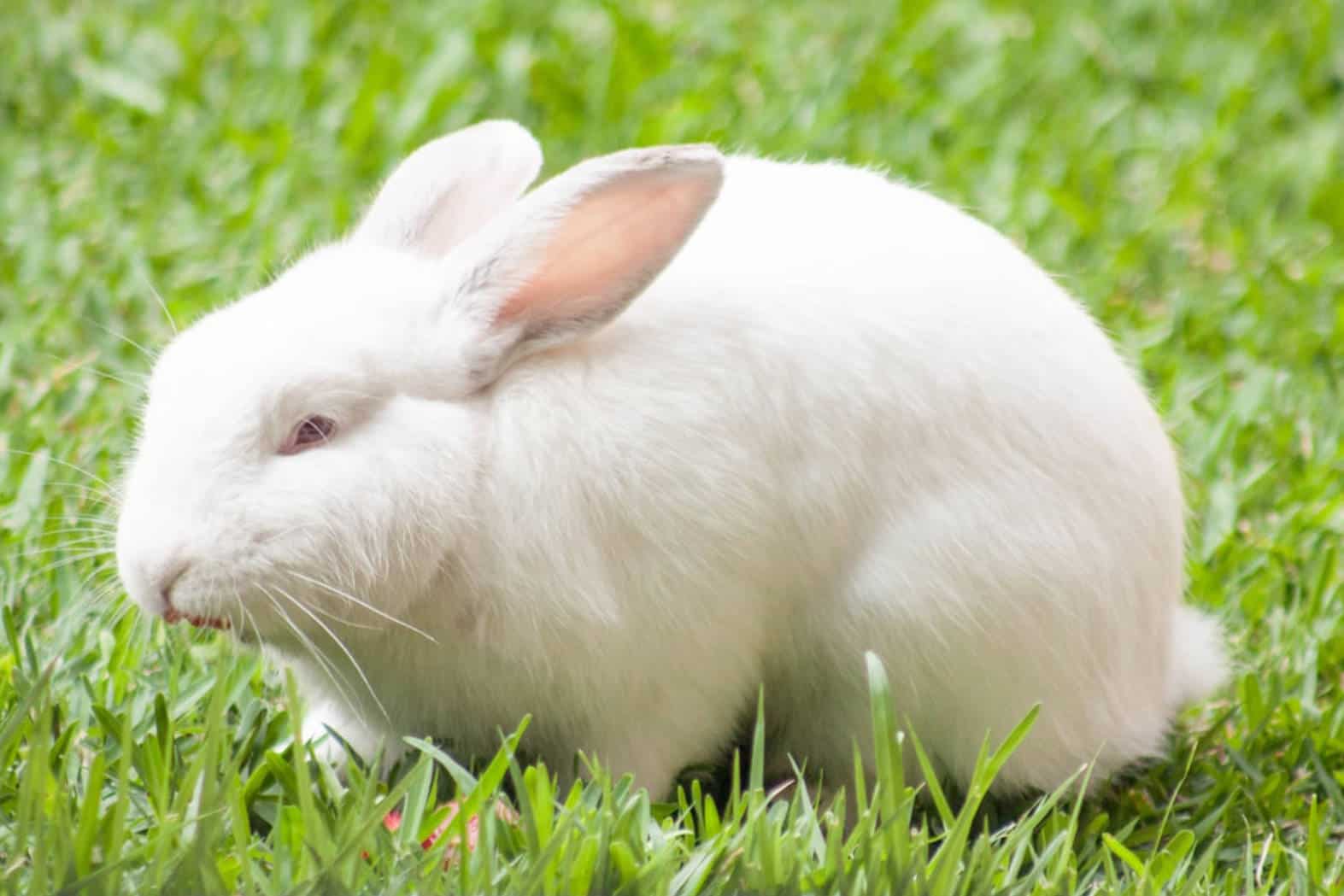 There is no particular “type” of rabbit that produces albino rabbits, as any of the rabbits out there can carry a recessive albino gene. However, some rabbit breeds are created to carry an albino gene. This group of species includes:

You might be wondering whether or not albinism can cause health risks to your rabbits. Your albino rabbit is perfectly healthy. Albino rabbits do not have any particular health risks related to albinism.

Although their eyes can be more sensitive to light, and they may be prone to sunburns, these are not precisely an alarming health risk. All in all, if your albino rabbit happens to have health issues, it would not be linked or caused by their albinism.

On a second note, it’s not good to deprive your rabbit of natural light as they need this. However, an environment that is too bright is also not advisable. Make sure that you get them just the right amount of light so they can live comfortably and, at the same time, healthily.

Like normal rabbits, they require an unlimited amount of hay and ample greenie leaves. Your rabbit’s digestive system is paramount for their health, so it’s essential to make sure that their digestive tract is always functioning and doing it well.

This being said, always give them ample hay to munch on the whole day. Occasional treats like green vegetables or fruits are also okay if you read more about just how much your rabbit is allowed to eat per day.

Do red-eyed rabbits have good eyesight?

Albino rabbits have issues with their eyesight. Although they are not blind, their eyes have fewer rod cells that cause blurry vision, thus making them more vulnerable and sensitive to overly bright lights.

This requires extra effort from them. You might have noticed your bunny twisting their heads at times. This is usually because they are trying to process what’s around them. 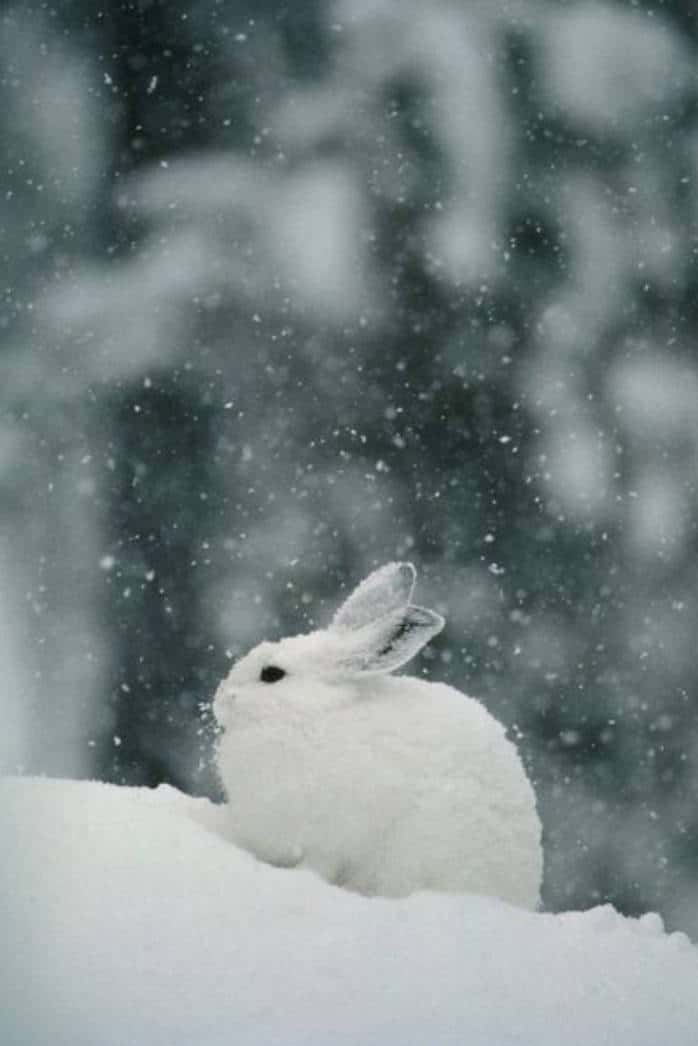 “Red eyes plus colored fur, is my rabbit albino?”

Red eyes for a rabbit do not necessarily mean that they have albinism. They can have other eye issues like hyperemia, which is a condition where there is too much blood in the blood vessel that works to supply blood to a specific part of the organ or part of the body.

This can be caused by several things, including allergies, bacterial infection, glaucoma, conjunctivitis, and fungal infections.

Their teeth’s continuous growth can also be a problem. Eyes become redder due to overgrown teeth placing extra and unnecessary pressure onto their ocular socket.

These types of rabbits do not have pigment on their fur or skin. However, the process of melanin suppression in their eyes is insufficient or defective.

Thus, pigment, although in small amounts, is produced and existent in their irises. This small amount is just enough to alter the process of light refraction.

In this way, their eyes look blue instead of pink or red. The difference between the red-eyed and blue-eyed albino rabbits is the difference in the genes for albinism.

Albino rabbits’ rarity depends on the situation. In the wild, albino rabbits are more vulnerable to danger, so they usually do not last long.

As a result, they do not have much chance to mate and create possible albino baby rabbits. On the other hand, rabbits raised in captivity or as pets have high chances of survival and mating, increasing the albino population.

Rabbits are naturally friendly, but they have their bad days too. Pet rabbits can exhibit aggressiveness towards their owners, friends, or even partners when it’s spring mating season time.

This is usually because of hormonal changes. Your rabbits are just more aggressively territorial during these times.

Owning pets means getting to know each other and building friendship. If you take care of albino rabbits, it’s good to know some albino rabbit facts and get to know your pet better.

Providing for them is more manageable, and the decision-making process is more informed when you research and learn about them.